Designed for ‘adventures for up to eight occupants’. : credit: © JLR

Once the designated workhorse of the Land Rover range, the new Defender 130 abandons its utilitarian roots to push firmly into Range Rover territory 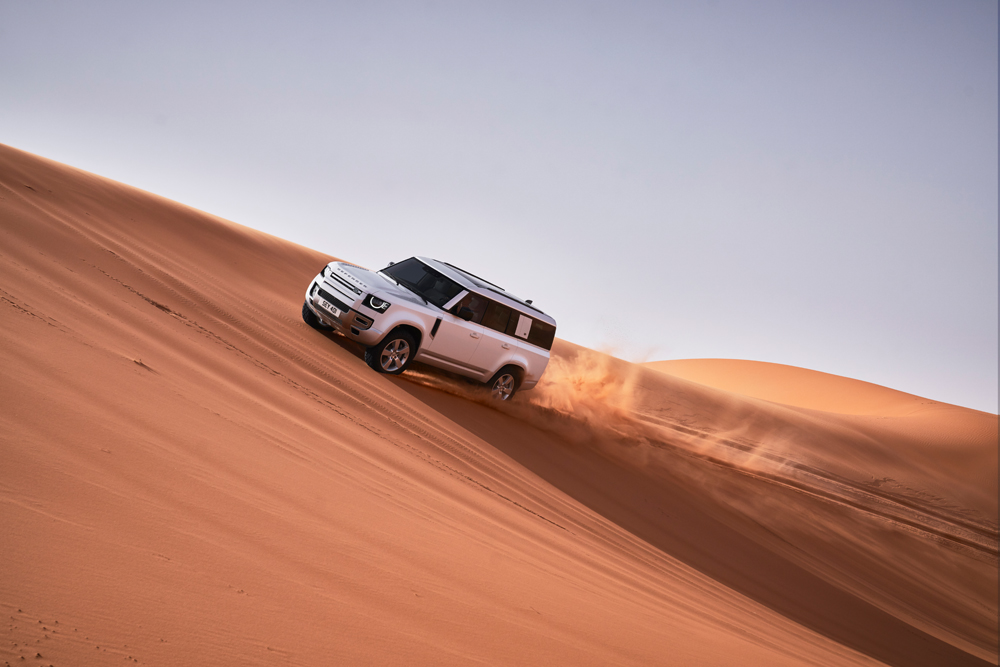 Luxury and Capability: The new 130 challenges the Range Rover

Available in five-seat and eight-seater guises, the new 130 gains an extra 340mm behind the rear wheels compared with the Defender 110 to create space for a full-size three-seater third row of seats and a giant amount of luggage room – up to 2516 litres with all the seats folded flat. The car’s specification has been ramped up with additional luxury materials, equipment and technical features in a bid to justify the Defender’s elevation to be considered an alternative to Land Rover’s top model, with the price of the top model, the P400 130 X, just breaching the £100,000 mark.

At launch the new Defender 130’s engine range comprises two petrol and one turbodiesel, all three of them 3.0-litre in-line six-cylinder Ingenium units hooked up to a mild hybrid system to enhance fuel consumption and emissions. The P300 and P400 produce 300bhp and 400bhp respectively, while the D300’s 300bhp is allied to 650Nm of torque, the highest output of the bunch. 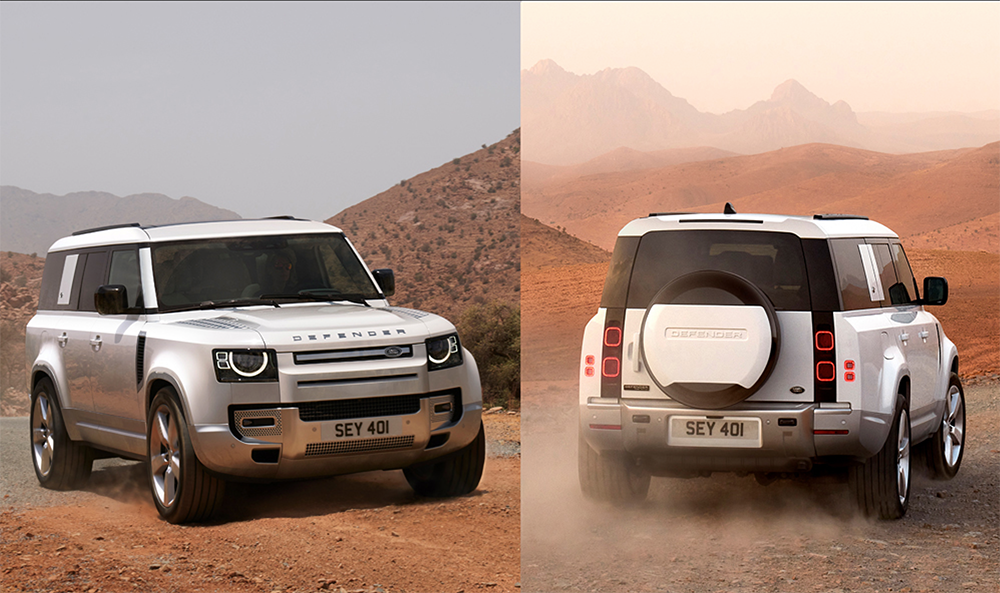 Land Rover’s Electronic Air Suspension with Adaptive Dynamics is standard on the new Defender 130, which is good news for owners with off-roading ambitions – on its highest setting this system raises the front of the Defender 71.5mm and the rear by 73.5mm, and contributes to the vehicle’s 900mm wading depth. In everyday driving, the suspension’s lowest ‘access’ setting makes the Defender easier to clamber in and out of, and the 130 features buttons to control it from the boot, for when you need to haul heavy bags of shopping aboard. Handy, too, when hitching trailers. 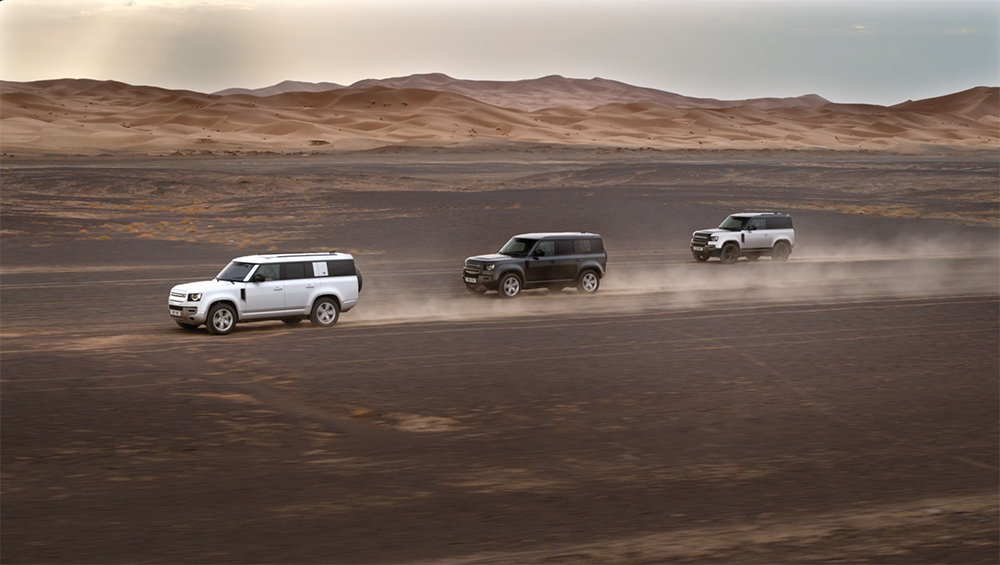 Given that they share the same front end design and 3022mm wheelbase, it’s unsurprising the new 130 echoes the 110’s 37.5° approach angle and 27.8° breakover angle, but the newcomer’s departure angle suffers from its extra length at the rear – the new 130’s is 28.5° compared with 40° for the 110 (on air suspension). As with the 90 and 110 the new Defender 130 has Intelligent All-Wheel Drive (iAWD) with a twin-speed transfer ’box, managed by Land Rover’s Terrain Response software, and centre and rear locking differentials. Also shared is the ZF eight-speed automatic gearbox. 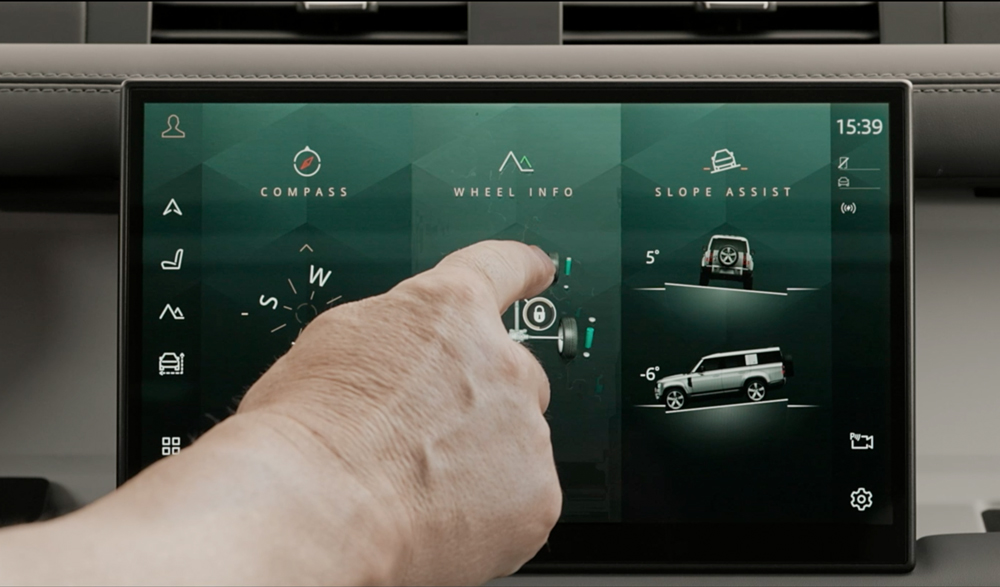 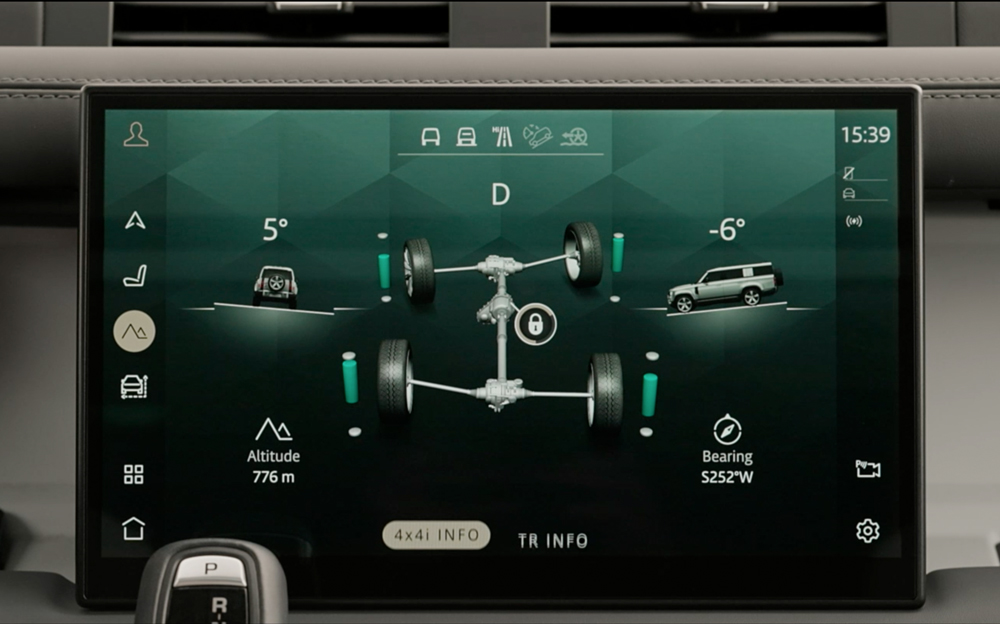 To reinforce the notion that this is the vehicle for adventurous souls, the new Defender 130 is fitted as standard with the what3words global positioning system – this maps out the planet in three-metre squares, each of which is identified by three random words. The system works through the 130’s Pivi Pro infotainment system, isn’t reliant on a phone signal to operate, and can be used to navigate to remote off-road locations. 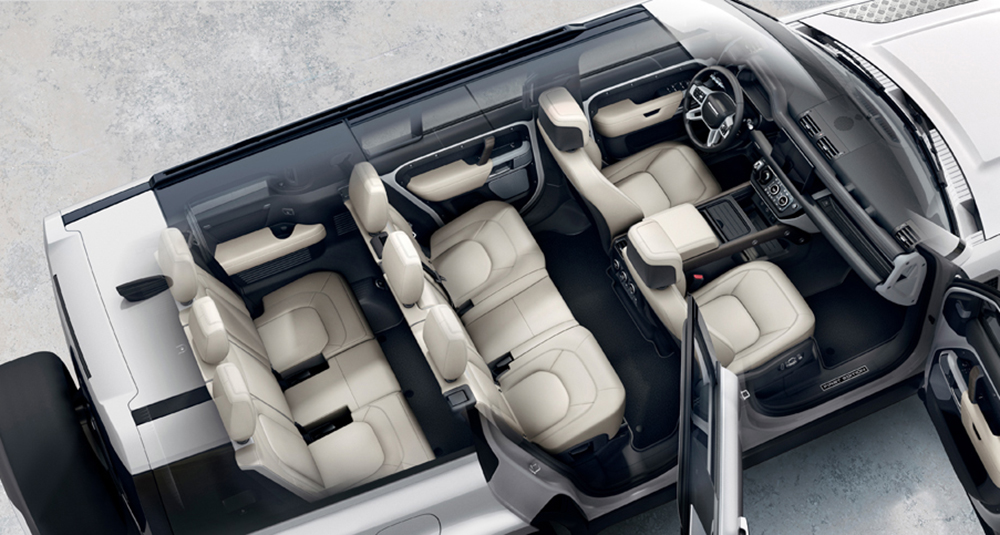 Loads of room, but not in the middle 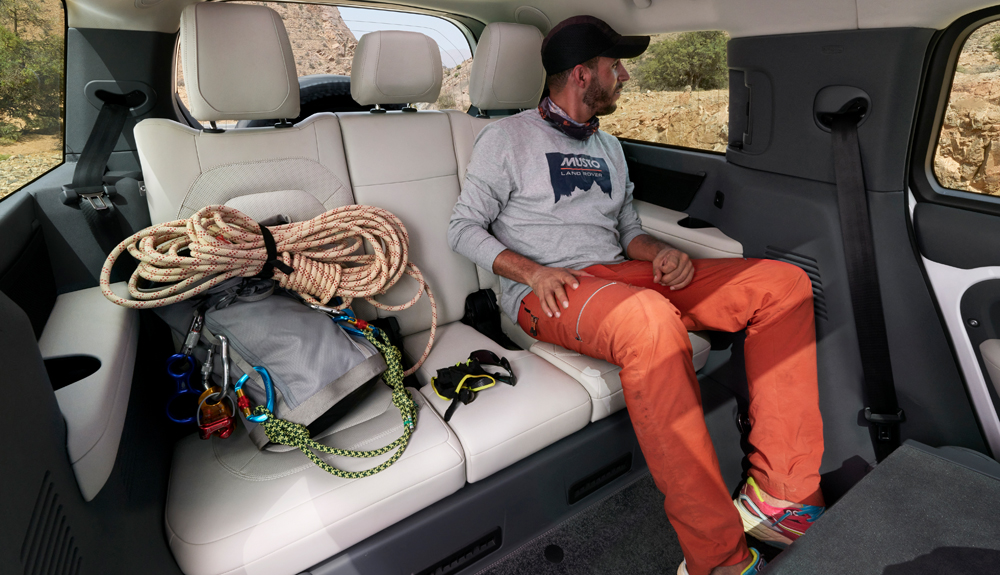 Headroom may also be a problem

Although the new Defender 130 is available as a five-seater – complete with 1329 litres of boot space when there’s a full complement of passengers – Land Rover wants to focus attention onto the eight-seat model, which has more ‘school run’ appeal. It’s claimed to offer full-size seats in rows two and three, but when you look at the photographs you can see that the centre seat in both rows is on the narrow side, especially the rearmost. The centre spots are probably fine for kids, but we reckon they’ll be less popular with adults – a test drive later in the year will tell us for sure. Same goes for headroom: the new 130 has ‘stadium’ seating, each row slightly higher than the one in front to create better visibility for rear passengers, so it’ll be interesting to see how tall folk cope in the third row. 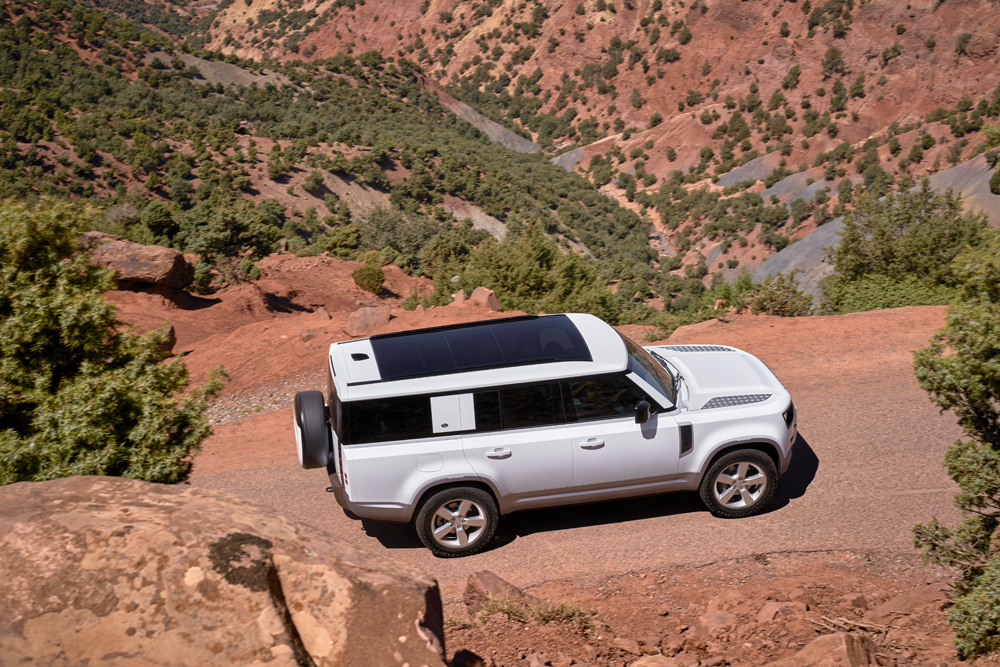 In all other respects the new Defender 130 looks after all its passengers extremely well. Rows two and three both have vents for heating and ventilation, and the 130 is the first Defender to offer four-zone climate control – a zone each for the driver and passenger up front, then a zone apiece for rows two and three. Access to the rearmost seats is made easier by the fact that the outer seats in row two slide forward as well as fold, making a bigger gap. And the outer seats in rows two and three, together with the front passenger seat, have ISOFIX child seat fixtures. Back seat riders will also appreciate the fact that the new Defender 130 not only has a panoramic glass sunroof as standard in the front, but also a secondary sunroof in the rear. 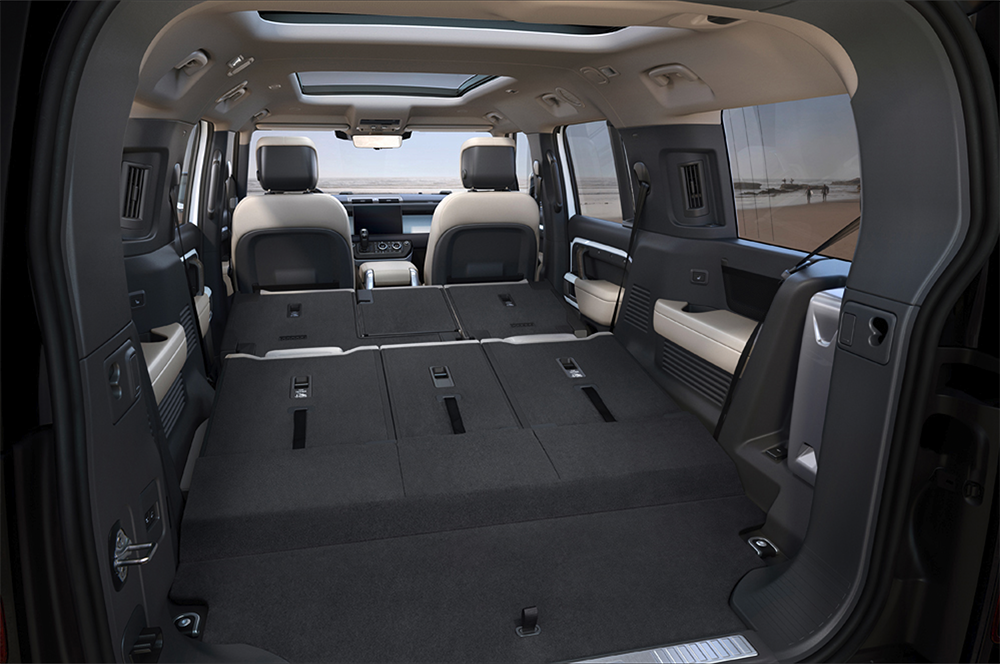 Fold-down seats transform the 130 into a small van

Even with all eight seats occupied there’s 389 litres of boot space, enough for a week’s supermarket shop for all those aboard, and maybe sufficient for a weekend away if you pack light. The seats in rows two and three split and fold flat 40:20:40, giving you impressive flexibility for juggling the ratio of passengers to luggage. Dump all your passengers and you have as much space as a small van, although the slight lip up from the boot floor to the folded third row seats will make sliding in large, heavy objects a bore. 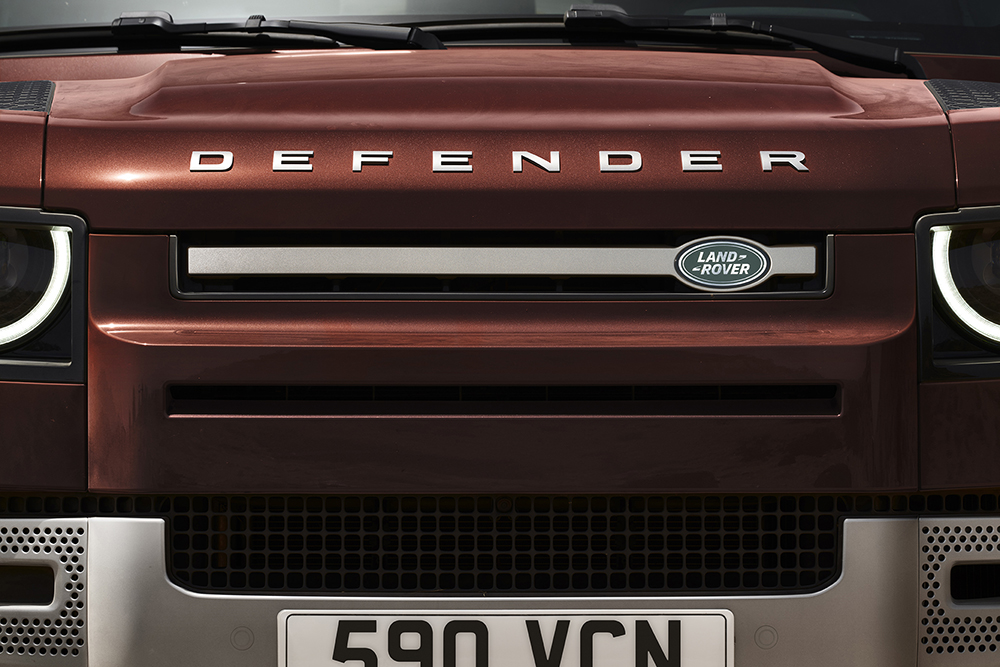 Land Rover is using the new 130’s launch to introduce fresh features to the Defender. Inside there’s more brightwork and new wood veneer and leather options, while Cabin Air Purification Plus is standard. Externally there’s an exclusive colour for the 130, Sedona Red, and there’s an Extended Bright Pack that brings a Ceres Silver satin finish to the lower body cladding right around the car, with the front and rear skid plates in Noble Chrome. 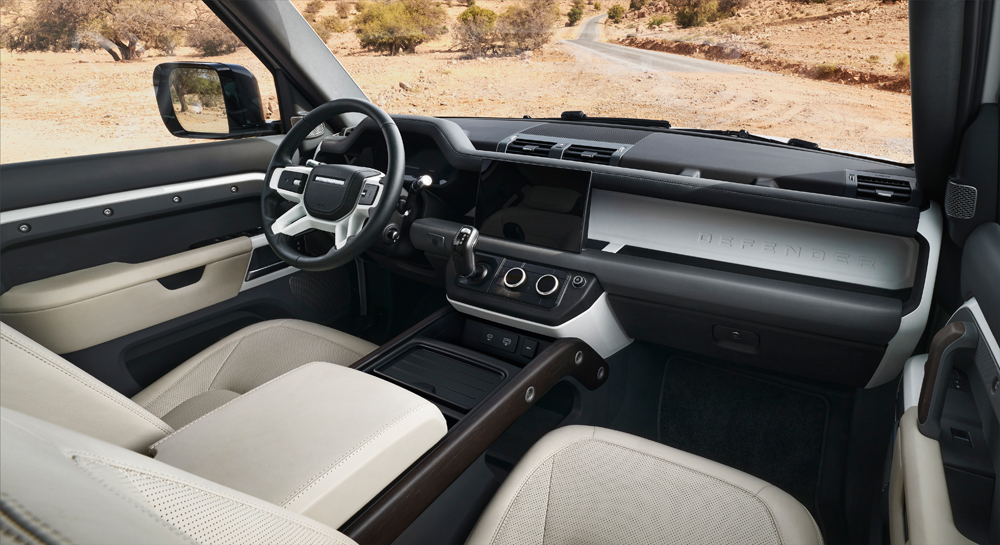 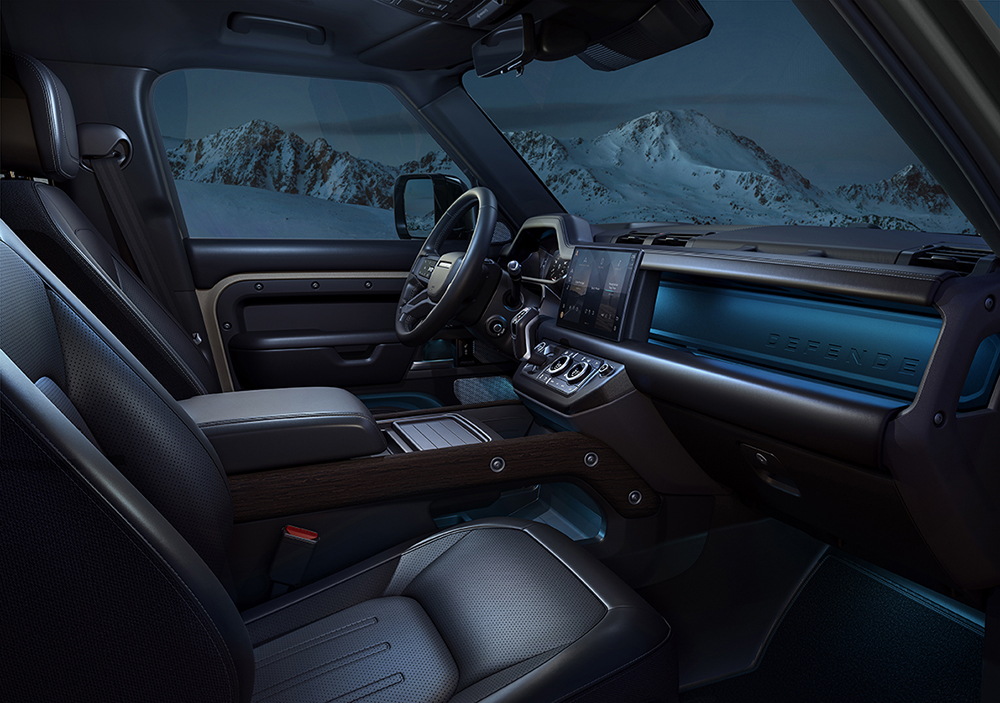