The Valley of Llangollen Our second lane was the most technical one : credit: © Patrick Cruywagen

I enter Wales via the old Roman road which is now known as the A5. It feels great to be out again on a laning trip with my friends after the long winter lockdown. I’m driving a new Discovery HSE R-Dynamic which has a starting price of £67,290. Chuck in some extras such as a heated third row of electric seats, electric deployable tow bar and an active rear locking diff, and the price climbs up to the £75k mark. 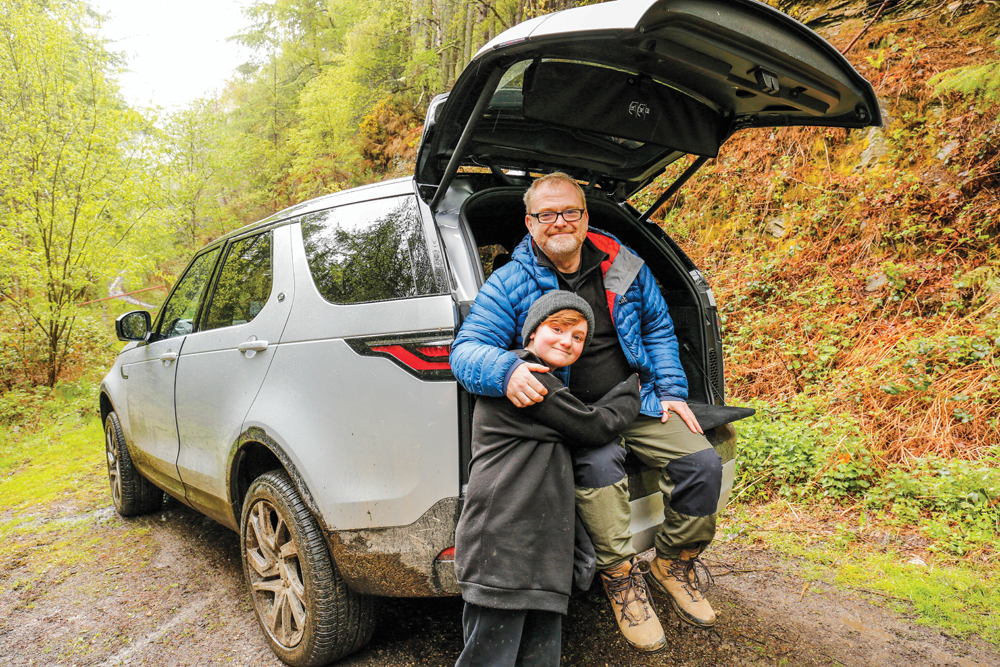 Stu and his daughter Eva Rose

With me is Stu Pickering, the GLASS rep for Shropshire and he recommends we take a quick detour to the easily navigable and impressive Pontcysyllte Aqueduct. Built over 200 years ago, it’s the longest and highest in the UK, and boats on the Llangollen canal use it to get over the River Dee. It’s truly an engineering marvel and I recommend you pay a visit should you find yourself in these parts. 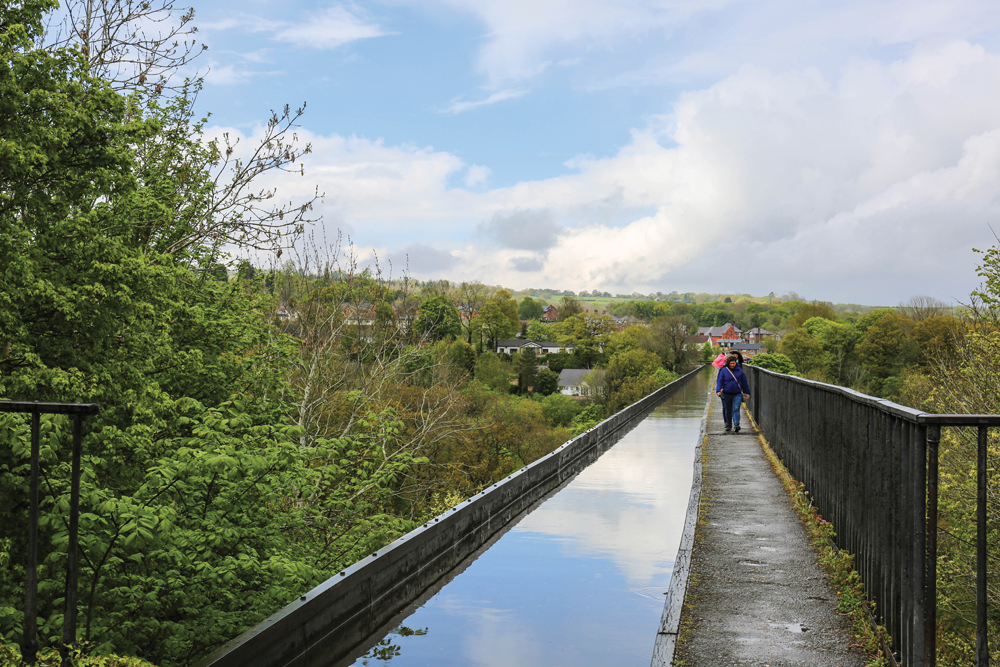 We take a quick walk across the footpath that runs next to the aqueduct. Steering a boat over the 18-arched stone and iron structure takes some balls as it is pretty high (126 ft to be precise) while the water is no more than 1.6 m deep.

We press on in the Discovery as we are meeting three Range Rovers at the Berwyn Arms, which is just to the west of Llangollen. A farmer in a Ford pick-up truck comes over to have a chat. ‘‘I have had many Land Rovers over the years but the new ones are not as reliable as the old ones.’’ He then goes on to tell me all about the features of every Defender ever produced, except the new one, of course. When he sees the three old Range Rovers pull into the car park he quickly jumps into his Ford. 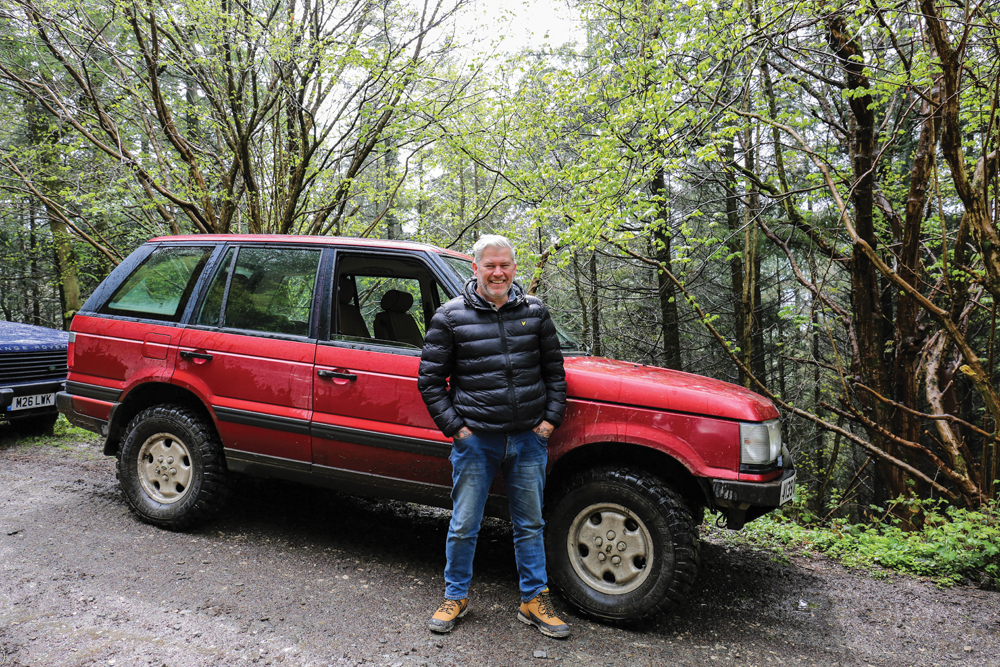 I had to pay Russ £200 to take this pic. I think he used the money for fuel and parts

If you want a trip full of good-natured banter then you invite Russ Hayes along. When not driving his P38 4.6-litre V8, Russ stars as a stunt double for George Clooney. You may have seen Russ in Ocean’s 11 or more lately the Nespresso TV ads. 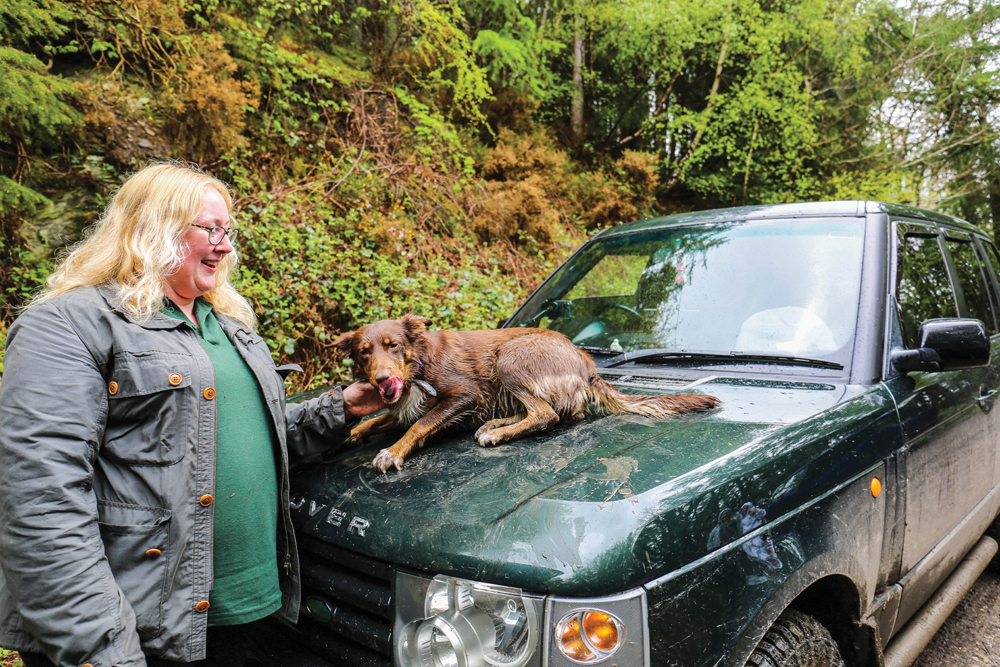 Then to make sure we don’t drive anywhere illegal we have Lauren Eaton, the GLASS media and communications executive officer, in her posh L322 TDV6. Lauren spends loads of her time fighting for the future use of our greenlanes and one can see her efforts on social media and in the GLASS magazine – she deserves an award that girl. 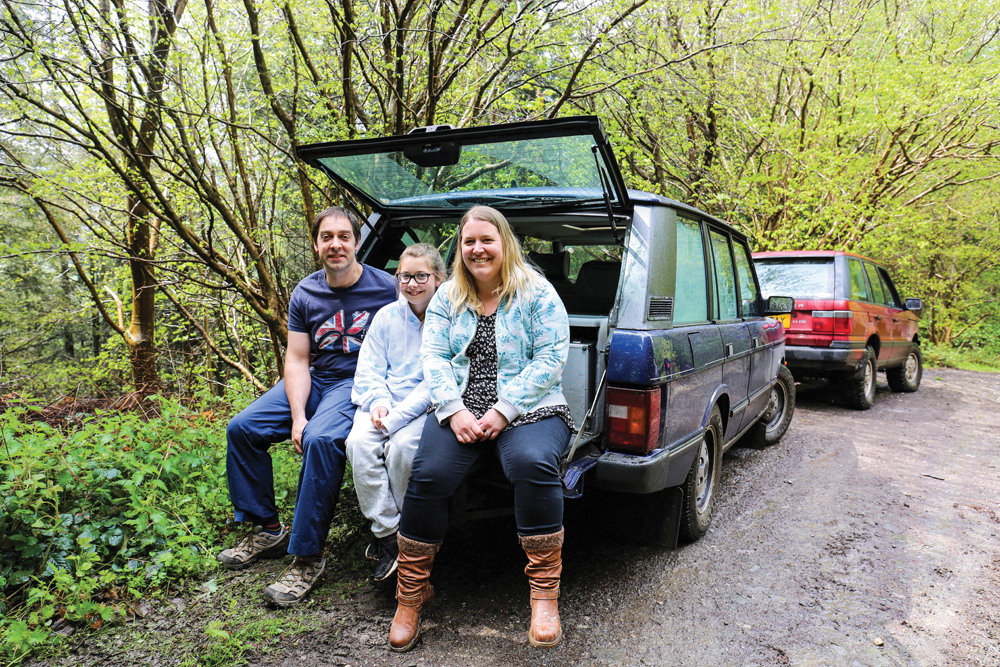 First time laning for the Faul family; certainly won't be the last

The final member of our awesome foursome is Robin Faul in his tidy Range Rover Classic 3.8-litre V8. This will be his first time out greenlaning. Incredibly if you add up what the three Range Rovers cost each owner it is still less than the cost of the optional extras alone on my new Discovery.

Lauren, who bases herself in Wales, has worked out a 66 km circular route for us that starts and finishes at this very pub. Pity the pub is closed. Most greenlaners in this area would normally head off to Wayfarer and White Stones. Those two lanes are closed at the moment however, and so I ask Lauren prior to the trip if she could find us a route that was neither mainstream nor popular. 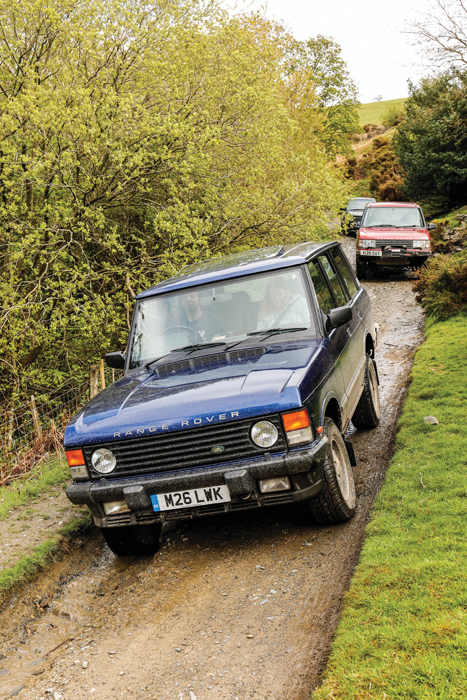 Do you know anyone else who goes greenlaning in a RRC Vogue SE?

Although I have been laning for several years now, this is the first time I've done it with just Range Rovers as company, but they and their drivers (except for newbie Robin) are all extremely capable. As I am once again behind the lens I hand the reigns of the Discovery over to Stu who normally drives his D3 when we are out laning.

“In my heart I am a Discovery man and I’ve owned a few. They are way more comfortable than your Defender,” he laughs. 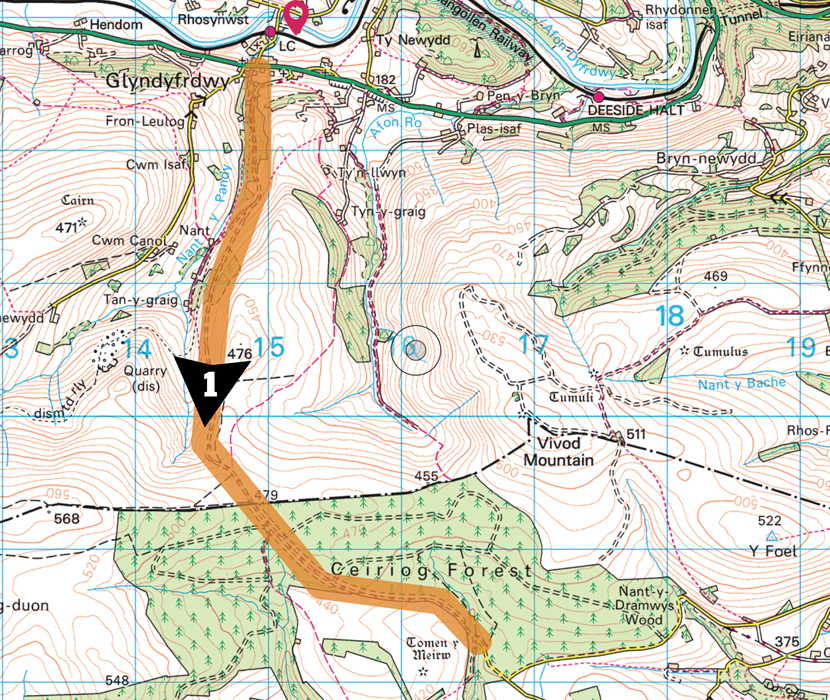 Lane 1 : Our first lane is only minutes away from the pub car park where we meet and it takes us south from Glyndfrdwy. This UCR starts off as a steep tar track with some serious drop-offs to our right. The tar is replaced by gravel but as I look back there are magnificent views from where we have just come. I call a halt to get a convoy picture, I would highly recommend you do the same. 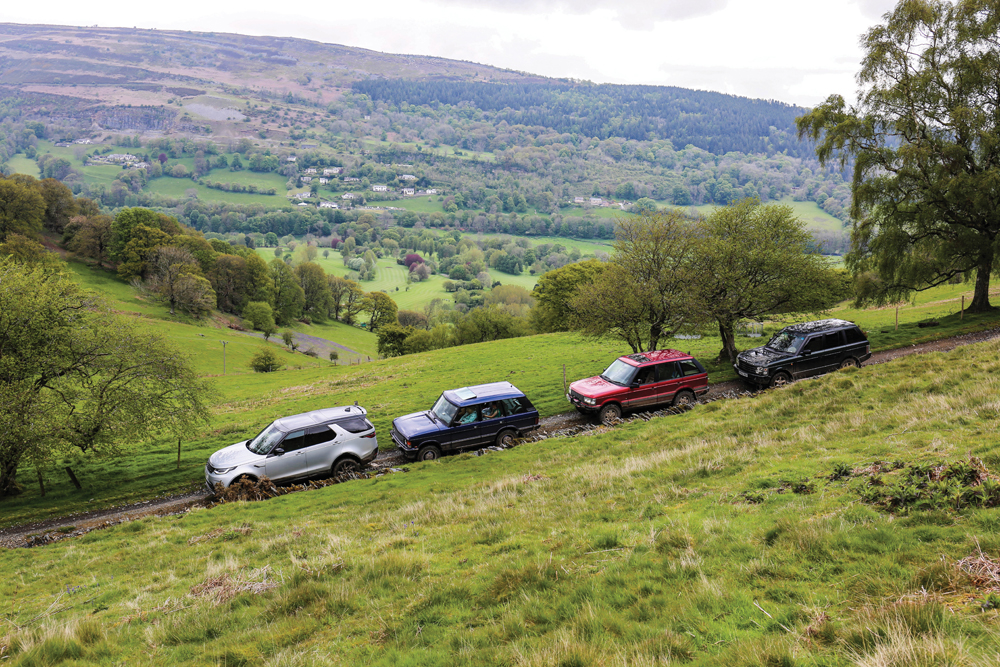 This is why you should try this impressive route

The skies are grey and there is light rain falling. The dizzying heights of the climb are replaced by the beautiful greenery of the Ceiriog Forest. I don’t think many vehicles come along here, and the pine needles kiss the sides of the Discovery. It’s not a technical lane but for someone like Robin it’s a confidence booster. 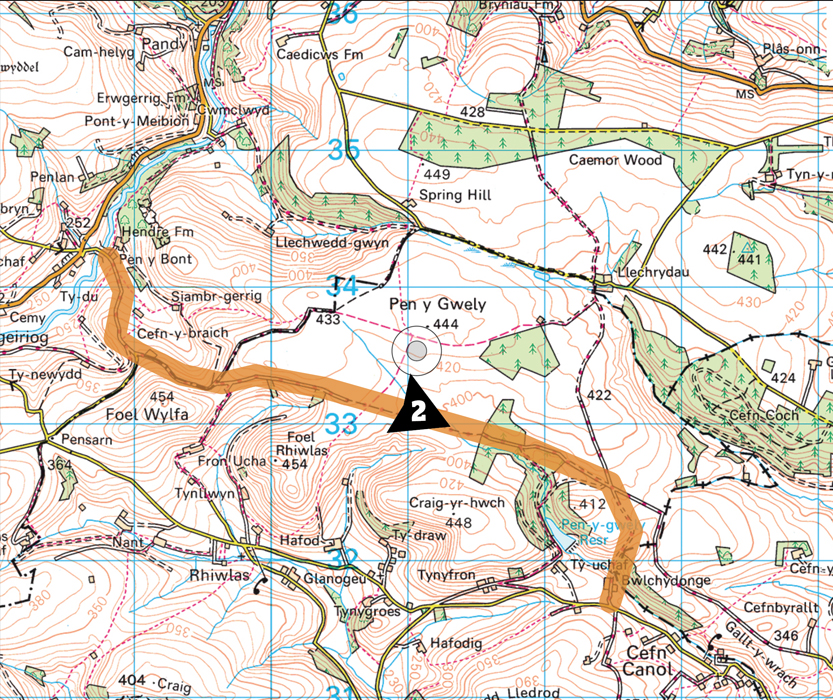 Lane 2 : We pass through the lush town of Glyn Ceiriog to get to our second lane. This is without a doubt the best lane of the day. It’s rather tight, so you have to concentrate and focus on wheel placement at all times. Get it wrong and you damage your Land Rover. Stu does ever so well and the cameras are a massive help when off-roading a new Discovery on a lane like this. There are also side slopes to contend with in some sections, fortunately on the worst section of the lane one of the sides of the track is concrete which helps massively with traction. I have to clear some fallen trees that have blocked the track. 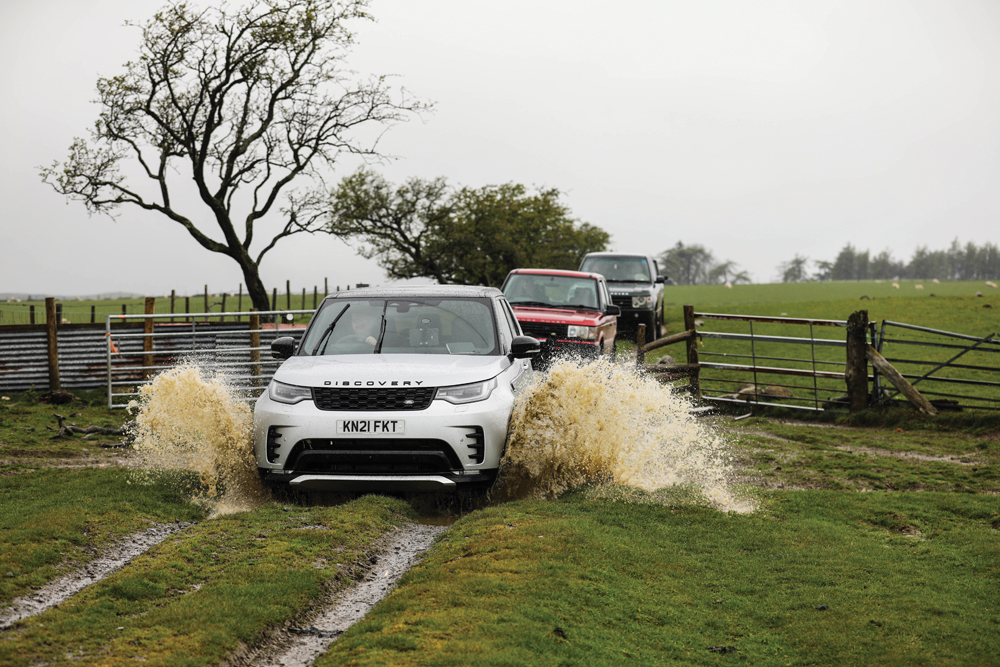 Don't forget to close the gate

The lane opens up and we cross farmlands with a liberal sprinkling of sheep. The raised Discovery is in low range and easily makes its way through the ruts. The one thing I have to mention to anyone thinking of doing this same route – put the fittest and fastest man or woman in the co-driver’s seat of the front vehicle. He or she can then open and close the 85 gates we encounter. This lane is more than technical enough to make even the most experienced driver sit up and take notice. 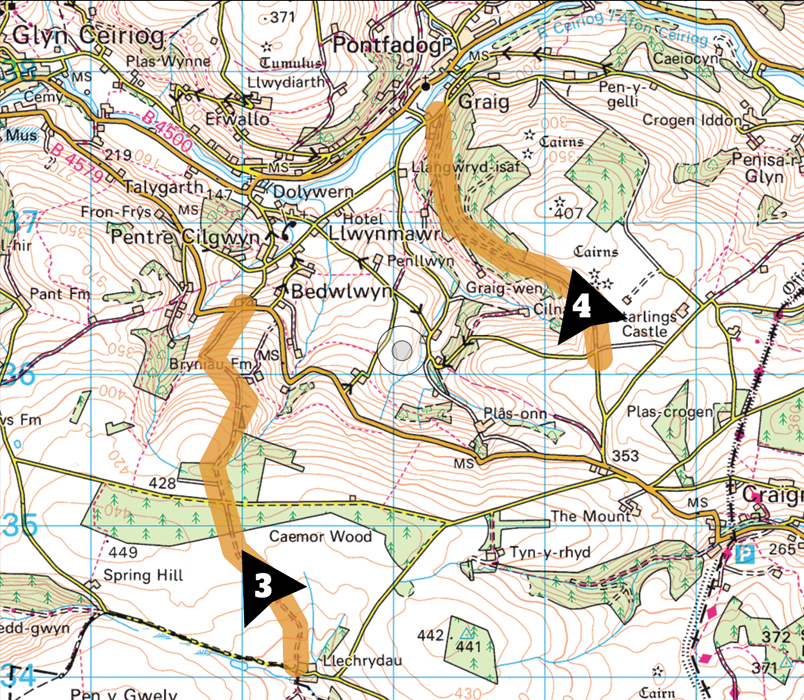 Lane 3 : It takes a fairly long transit to get to our third lane which I have named Caemor Wood. One of the great things about our day out is that we don’t see another 4x4  and it stays that way for the rest of the day. On Strata Florida or Whitestones you always see loads of 4x4s. This lane is fairly bumpy at the start so do make sure your dentures are in place. After a while the track takes us into another sweet smelling pine forest. We swap the forest for misty hills before God decides that he has given us enough rain. To get to the end of the lane we have to negotiate a seriously steep set of switch backs.

Lane 4 : There are lovely views of Sterling Castle from the start of this lane which just seems to climb and climb until you eventually enter the forest. As the sun comes out we decide to stop for lunch in one of the clearings. The kids run about while we enjoy our sandwiches and hot tea. Most of the descent off the lane is on a tar track so it should not pose any significant problem to you. 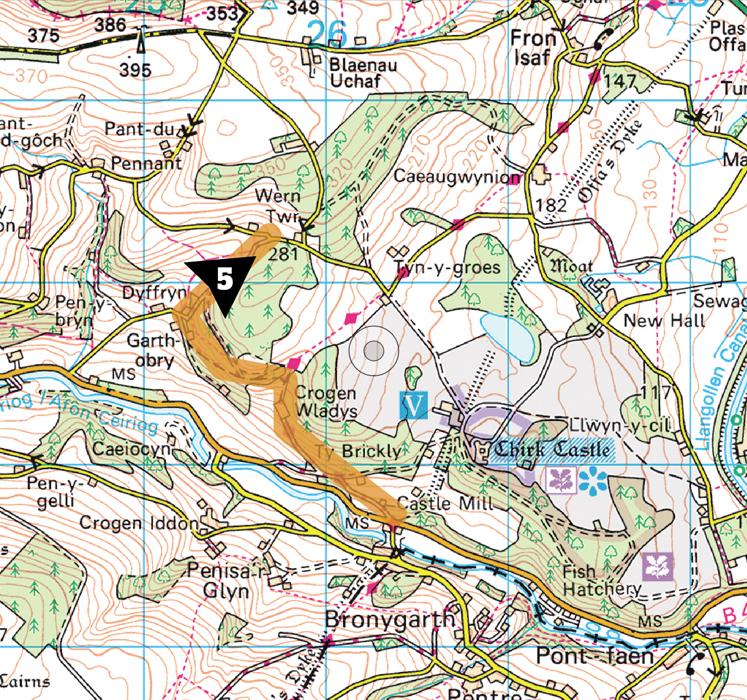 Lane 5 : Take care as the road near Castle Mill to get to the gate at the start of this lane is tight. This is followed by another rather steep climb to the top of one of the many surrounding hills. The beautiful big trees and views make the steep climb worth it. As per the previous lanes we enter a rather wild-looking forest where the lane seriously narrows. At one stage I thought we may have to do a long reverse but we make it to the end, as do the Range Rovers. Obviously. 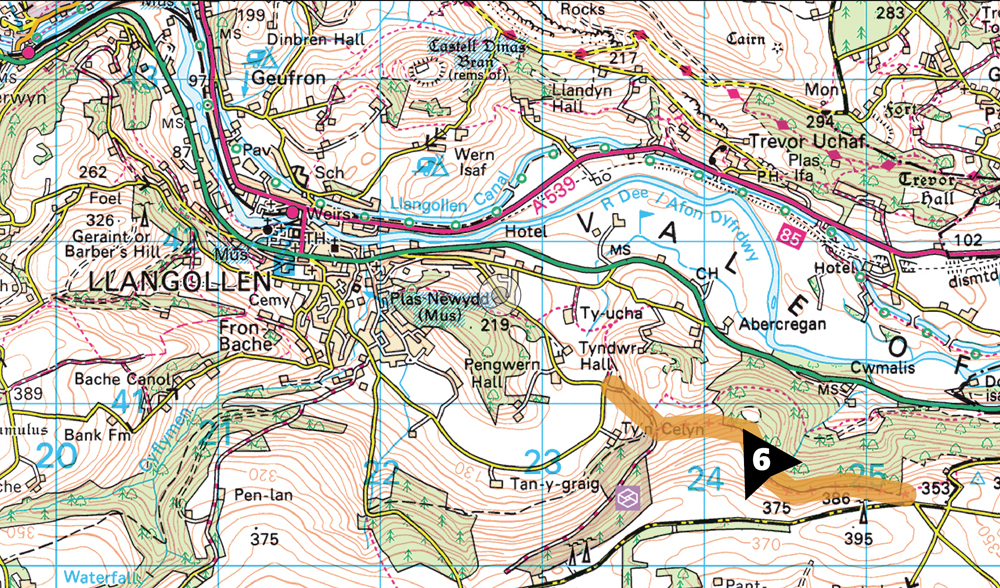 Lane 6 : Our final lane lies to the east of Llangollen and is not too far from where we started this morning. The track is very well-maintained and the glorious views over the Llangollen valley have made my drive from Bedfordshire well worth my while. We can actually see the Pontcysyllte Aqueduct from the track. Some bits are a little scratchy but nothing worthy of sending an email to the JLR press office about. As we descend off the lane there are some loose stones that require careful negotiation. 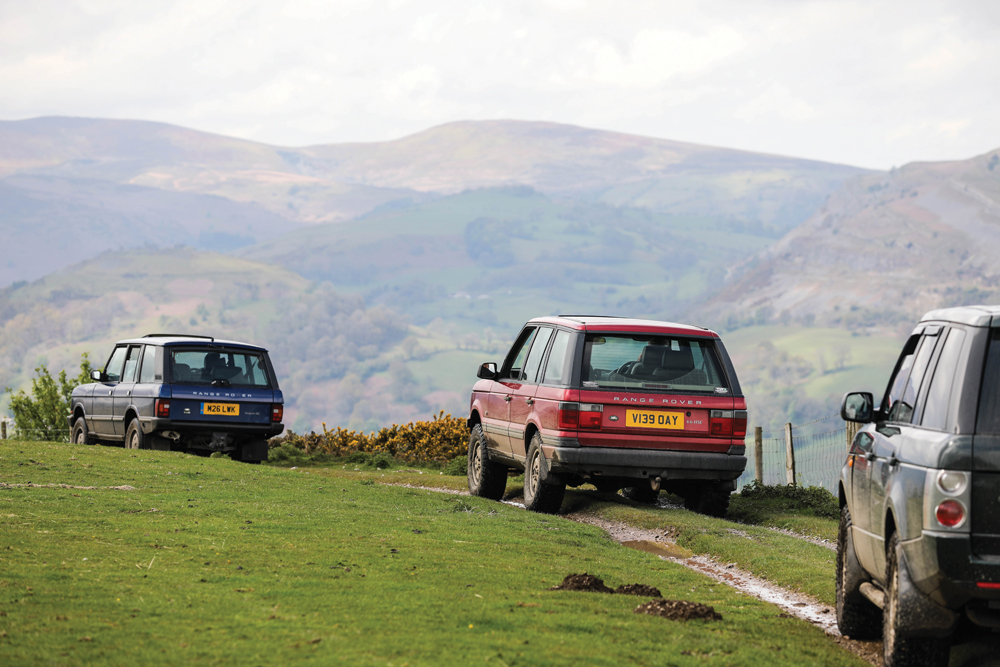 Did I mention the views?

These weren’t the best-known or most popular lanes, but they have provided us with a more than adequate 4x4 challenge and all of the Land Rovers have emerged from the trip without any battle scars or breakdowns. To me that is the most important thing. If you want to avoid the crowds, enjoy great views and a drive that won’t damage your Land Rover then try the Valley of Llangollen.

For more off-road adventure and inspiration, both in the UK and abroad, visit our Travel section.