Joe vs the Volcano When lava started to burst through a crack in Mount Fagradalsfjall, it was the first eruption of its kind in more than 800 years : credit: © Joe Shutter

When Mount Fagradalsfjall recently erupted and spewed hot molten lava out in all directions, Joe Shutter, our man in Iceland, jumped into his Defender 110 and drove to the volcano to capture the action

It all began on an innocent Friday night not so long ago when an orange glow appeared on the horizon. Just to the west of the nation’s capital, Reykjavik, which is where I currently reside. To give you some sort of context, the red glow caused by the hot molten only made its appearance after over 50,000 earthquakes had hit Reykjavik and the surrounding areas. On average we have about 500 earthquakes here a week. Still want to live in Iceland?

At long last we had some live lava action that might be worthy of capture on my cameras. First at the scene were the helicopters, then the planes. Followed by the official confirmation: there was a new lava flow at Mount Fagradalsfjall, which is only an hour’s drive away from my apartment.

The very same night that Fagradalsfjall started erupting, I was having an indoor gathering (the result of a well-handled pandemic) of nearly 20 friends. Pure coincidence I swear. This gathering gave me the wonderful gift of a Saturday morning hangover which needed some nursing and attention but by mid-afternoon I was back in work mode. I needed to capture the unfolding drama and story at Fagradalsfjall.

It was time to start planning my route to the new eruption. Imagine a picture of my 2006 Defender 110 Td5 with an erupting Mount Fagradalsfjall as the backdrop? For hours I researched, asked friends in the know, scoured Google Earth. We then caught wind of a little-known track that would take us to the back of the eruption site via the next valley over. With this new intelligence I began last-minute preparations: camera batteries were charged, gear checked, then it was all thrown into the 110. 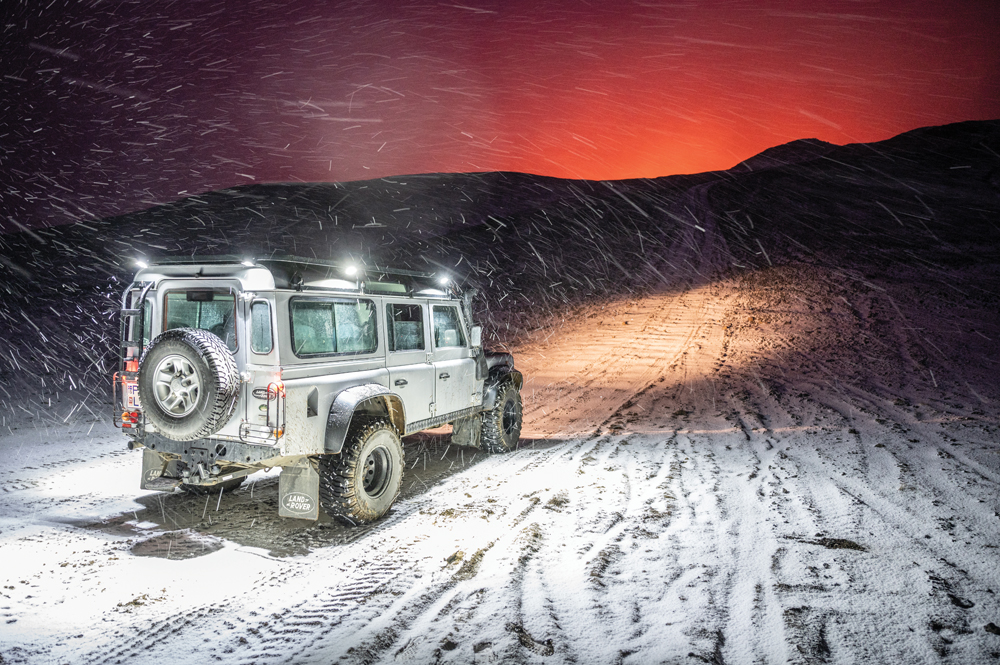 After more than 50,000 recent earthquakes, an eruption was imminent

At 2.00 am, we jump into my Zambezi Silver Defender with the new 35/12.5/16 tyres and snazzy Spectre wheel arches to hide them. This would be their first outing. Most of you will know that to drive here in the winter, or if you want to drive up a glacier, then standard tyre sizes won’t get you anywhere. Remember this is the Land of Fire and Ice.

I am noticing a massive shift between the on- and off-road performance of the Defender due to the tyre and wheel arch changes – it's considerably worse on the former and considerably better on the latter. For this journey, I really need the 35 inch wide tyres as my old 33s on the original boost alloys wouldn't have handled what we are about to experience. One negative is that the extra 2.5 inches of tyre width are much harder on the drivetrain and gearbox. That might need looking at in the future. The massive off-road improvements make it worth my while though.

​​​​​​The first part of our adventure is along familiar roads and tracks. Then we turn left at a church. Some might see this as a blessing before we enter the realm of hellfire and brimstone. In a very, very small way, I feel like one of Tennyson’s Light Brigade before the disastrous charge as I know not what lies ahead. Will we really find the eruption along this remote track that we now find ourselves on? Or will the severity of the track force us to turn around?

For me, the best part of driving a Defender is when you slam it into low range; that's when it flowers into the beast that it really is and its capabilities are really apparent. It’s a thing of beauty and you just slip it into place before the action begins. The shift brings with it not only more torque and control but also the opportunity for adventure. The terrain initially poses no significant problem, save for a couple of sticky spots. In Iceland I have found that a slow, safe crawl will usually get you anywhere. 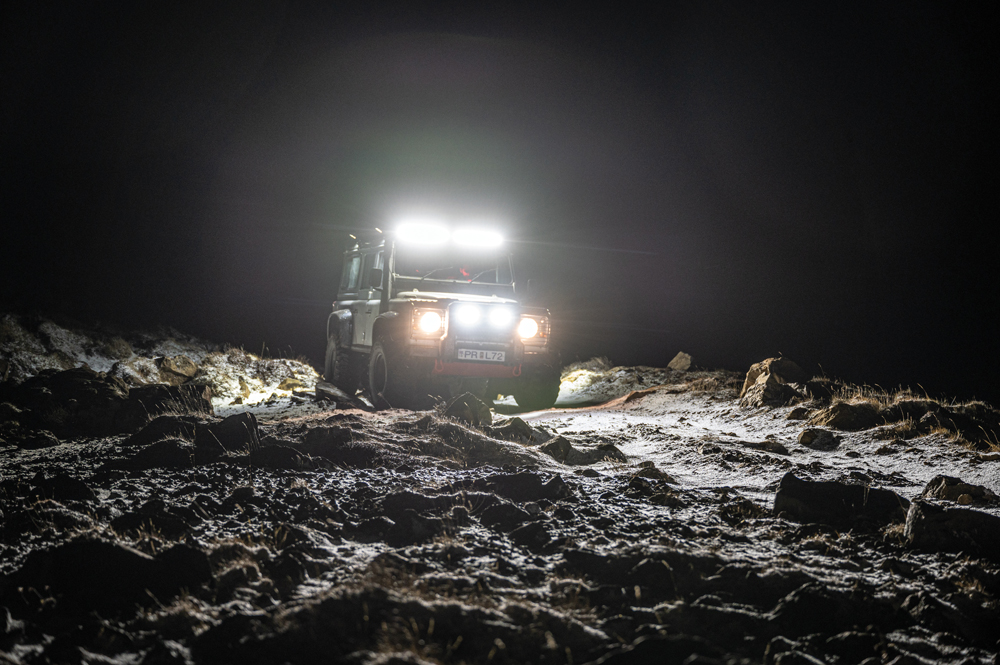 The track then becomes very rough and bumpy so down to 13 psi we go. This takes me no time at all to do thanks to the special open valves on the rims. At one or two of the more technical section of the tracks I have to ask one of my mates to hop out and clear some large rock off the track, they must be the result of recent earthquakes in the area. It is as bad as I expected it to be, but not worse at least.

We continue to follow the ever-brighter glow on the horizon, but the question on everybody’s lips is: where is that crucial left turn we are looking for? We need it to reach the now very impressive glow. It starts snowing, cutting visibility to about only 20 metres, the mercury goes into freefall. Even with the thousands upon thousands of lumens pouring out of my auxiliary lights, I’m using the GPS and glow to navigate. The black sky starts to slowly lift, twilight is coming for us.

All of a sudden I see another car on a road just below us, it’s a Search and Rescue 4x4 on the left turn track we are looking for. We see them but I am not so sure if they can see us. We don’t think so but how do you miss a Defender 110 with more auxiliary lighting than a prisoner of war camp? We follow their route, as they drive on and away. Soon we make our way up and over a ridge but not before one of my friends has to get out and guide me through some heavy snowfall and technical sections. It reminds me of the poor souls who had to walk armed with flags in front of the very first steam locomotives way back in the 19th century. 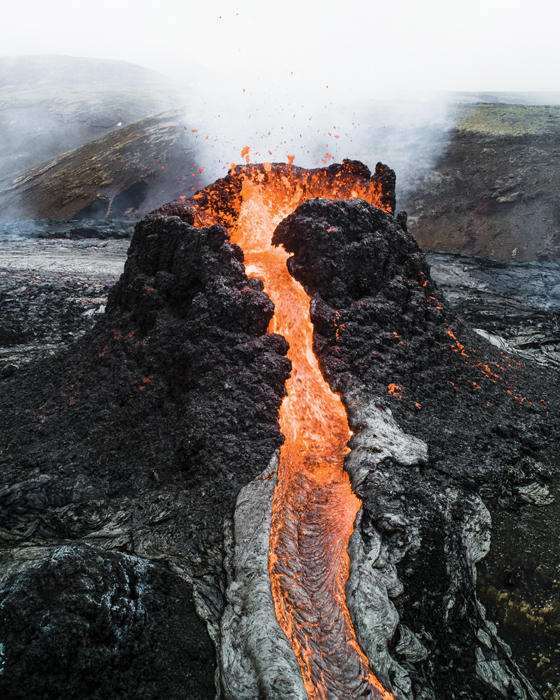 Around 300,000 cubic metres of lava poured out during the eruption

All we have left to do is make our way up one more long steep slope and victory will be ours. Then I will be able to get that elusive photo of my Defender 110 and the erupting mountain. Just as I am about to flatten the accelerator with all I’ve got an ATV makes its way towards us from the opposite direction. It’s the crew from Search and Rescue.

We are out of luck. They tell us to turn around. I try and reason with them but they are having none of it. They say that we are on their access road and only they can use it.  So, we have to turn around and go back to where we turned off on the main road. I manage to grab a quick frame or two with the bright red lava glowing on the horizon. As two vehicles have now driven over the tracks the snow is turning to slush and mud, making it trickier than on the inbound journey. It was certainly a case of so near, yet so far. At least we had given it our best shot.

But that wasn't the end of the story. Later we did get to the volcano, after getting permission from the landowner to drive there and take the remarkable photograph you can see on the opening pages of this feature. The lava flowing down the mountain in the picture was from the second and third fissures, which had opened the previous day. At the time of writing there are now seven fissures and the Civil Protection Authority has banned access to the area to everyone except the police, and Search and Rescue and the landowners. 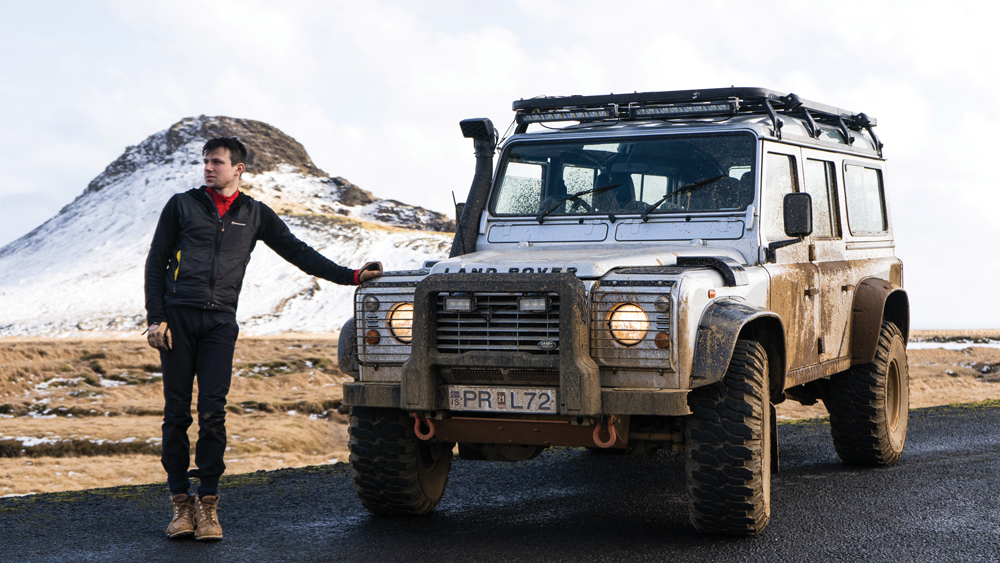 Joe Shutter's 110 allows him to see the best of Iceland

Witnessing nature in its rawest and most powerful form helps me to make sense of Iceland, the unique and special country that I now call home. For years, I have hiked and driven across black lava fields that stretch for miles. In all that time their origin was always missing. Now it's a mystery no more.

We all know that the hard black stuff is old lava, that was once liquid rock, yet somehow that's not the same as seeing that liquid rock flowing out of the ground. The sight, smell and sounds of that flowing liquid rock will live with me for the rest of my life.

I urge you all to put seeing Iceland in a Defender on your to-do lists. I once did and now I call Iceland my home.

EasyJet flies from Luton to Iceland and if you book well in advance you will be able to bag yourself a bargain ticket.

Some years ago, we at LRM rented a Bigfoot Defender from Ice Rovers, it was not cheap but we used it to drive up the Langjokull Glacier. Definitely worth it. To book a Defender from them see ice-rovers.is.