Retired couple Ian Scoon and Liz Neilson take their Discovery 4 and custom-built caravan on a trip around the world. First stop Canada and the north and western region of the US

Having retired and downsized, the next step was travel. Following the Aussie mantra, ‘Adventure before Dementia’, the idea to travel around the world was hatched. Liz made it perfectly clear that it would only happen if there was a high level of comfort, hence the decision to tow a caravan.

A plan of sorts was agreed: to roughly follow the Pan American Highway south starting in Canada, going around Central America by ship given some of the challenges it poses – after all this is a retirement trip not an expedition – before ending up in Ushuaia, Argentina. From there we’d go by boat to South Africa and travel up to East Africa and then on to Australia and New Zealand.

In May 2016 we shipped to Halifax, Nova Scotia; the Discovery and caravan went by Roll-on Roll-off (RoRo) ship and we flew with our 20-year-old cat (who travelled as hand baggage with Air Canada!). 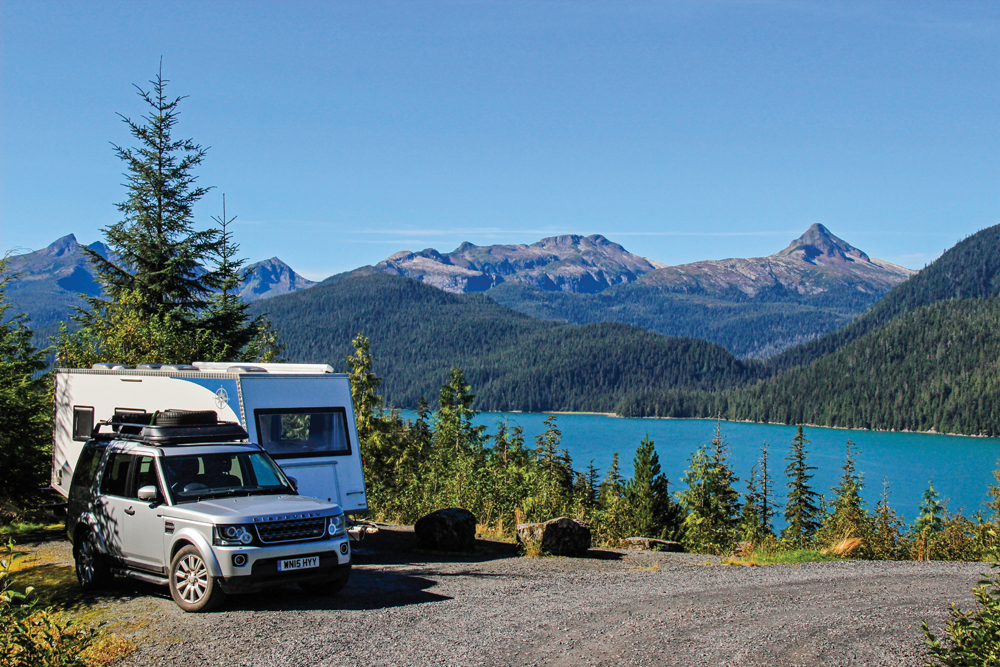 Free campsite on Ketchikan, South-east Alaska, near the Marine Highway

In theory the Discovery and caravan must be completely empty, however in practice the car must be empty and your camper can be shipped with the normal equipment; bedding, pots and pans, etc.

The beauty of the caravan set-up is that it is a self-contained unit and you retain the keys whilst it’s in transit. Customs inspect the rig at drop-off and pick-up ports.

We used a shipping agent to make all the arrangements (including embarkation port, shipping line and disembarkation formalities). This really paid off when our RoRo which was on its maiden voyage arrived three days late and the local agent pulled out all the stops and sorted the paperwork within 24 hours. You don’t need a Carnet de Passage in the Americas and so Customs issued a Temporary Import Permit (TIP), enabling us to stay in Canada, USA and Mexico for a maximum of 12 months. Rather nervously we took a taxi to the port to collect the rig. After inspecting that everything was intact and undamaged, we were free to go. How easy was that? 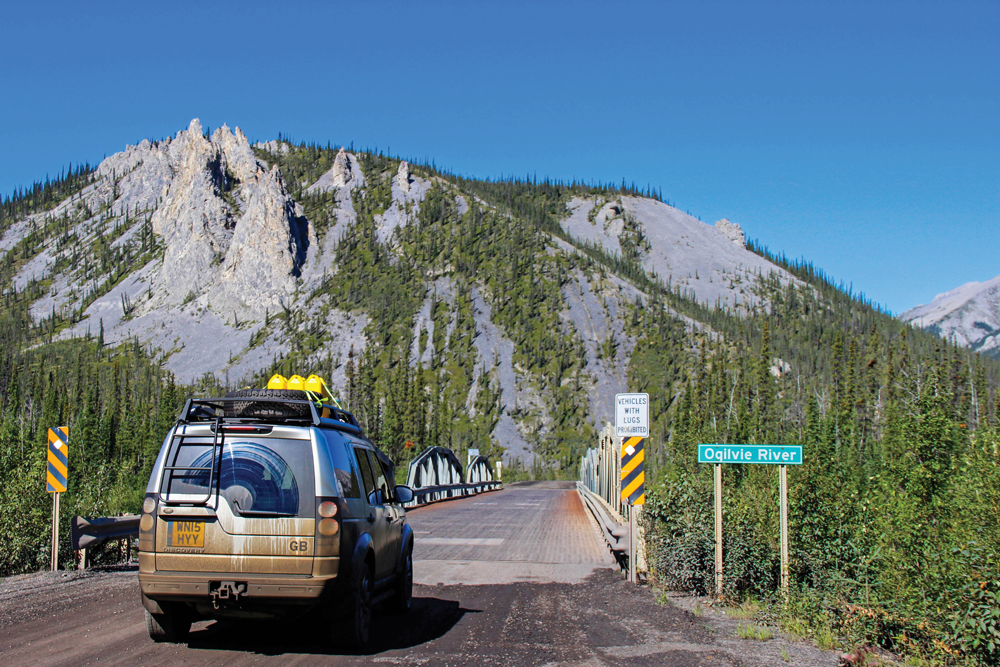 A perfect summer day. Heading north on the Dempster for a side trip without the caravan. 60 litres of fuel and second spare on the roof

In May 2016, we finally left a chilly and wet Nova Scotia. Canada proved an easy country to travel around, with excellent roads, a great network of campgrounds and really
friendly people.

In one town, Liz opened the caravan door to find a guy, sporting possibly one of the biggest beards in the world. ‘‘Welcome to Canada you Brits,’’ he bellowed. For animal lovers like us, walking in Ontario amongst beavers, moose and black bears was archetypal Canada.

The Trans Canada highway is lined with trees blocking out otherwise stunning views, you walk on dense tree-lined paths seeing virtually nothing to either side, and secondary growth trees are so prolific and tall that they block out the sunlight on many camp grounds. 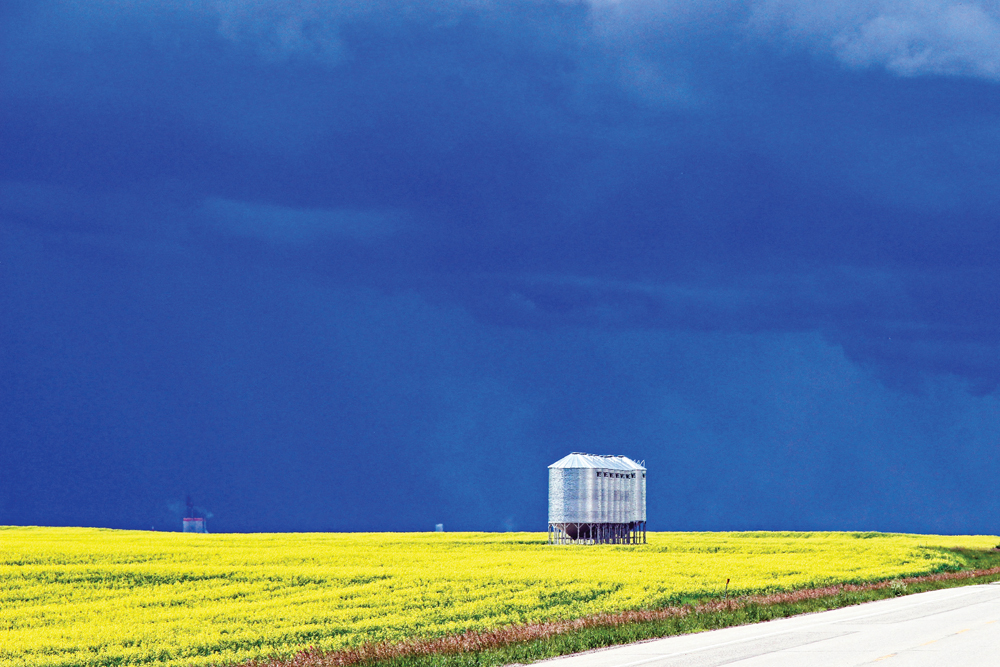 Open lakeside sites are stunning, but few and far between. So we hit the gas and headed west to the open land of the prairies, where nowadays there seemed to be more rape seed than wheat.

In Canada the speed limit for all vehicles is the same. If you keep to the limit you see very little traffic as everyone cruises at the same speed, but drop 10 kph and life gets hectic as huge semis pass you on this roller coaster of a road. Thank goodness for the power and towing capability of the Discovery 4. 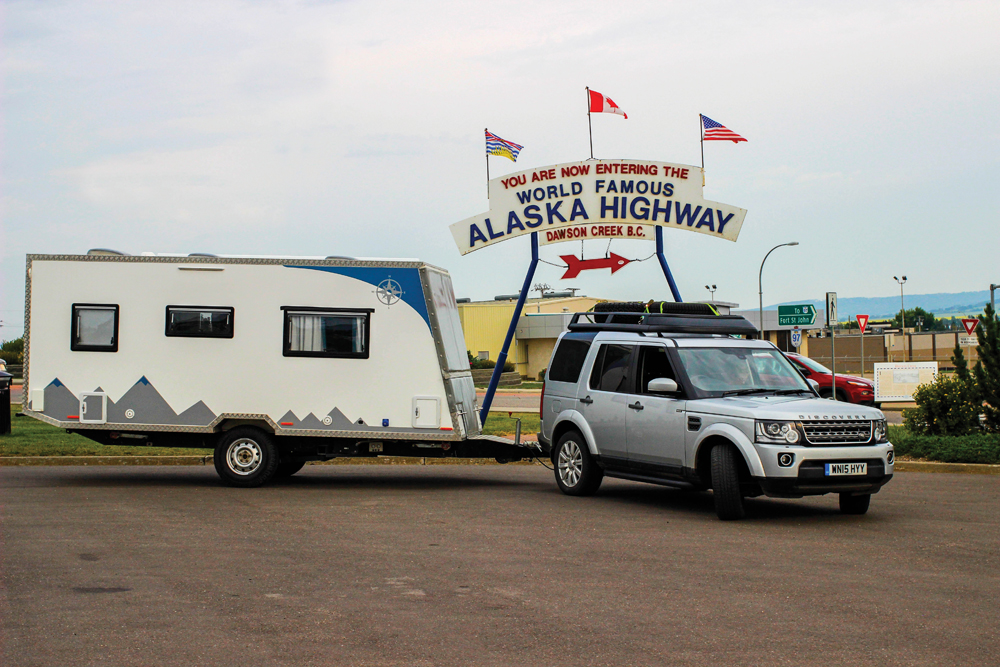 The journey north begins on the Alaska-Canadian Highway

The Dempster Highway has almost mythical status in Canada as an ice road leading directly north to Inuvik in the Arctic (in fact it now extends all the way to Tuktoyatuk).  In summer, it is a lightly travelled gravel road, with permafrost rather than the frequent rain keeping it wet. 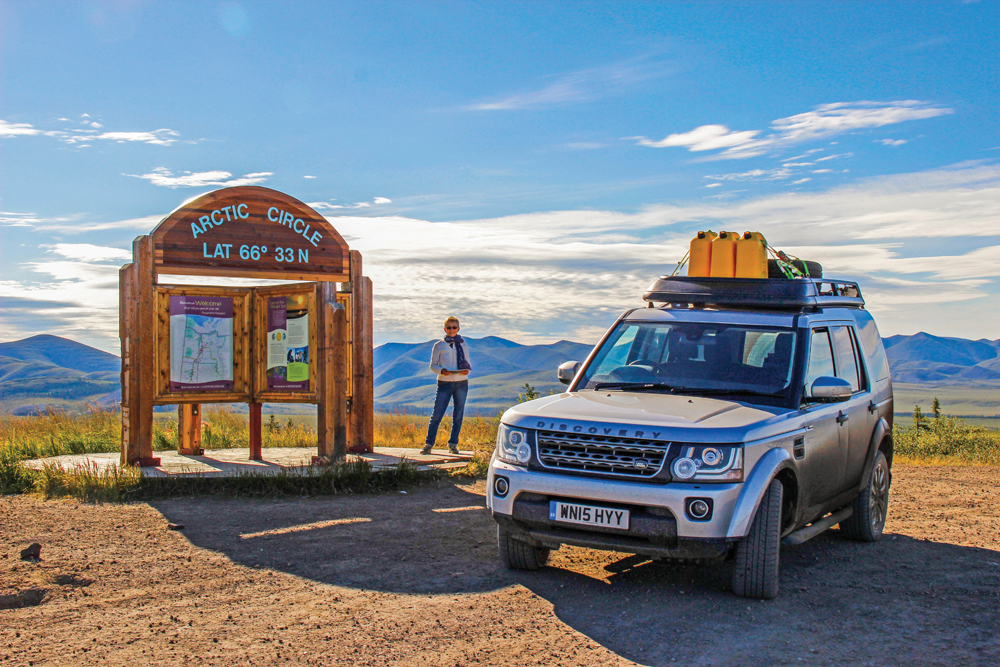 People routinely shred tyres here, but that’s simply because they are travelling too fast. On the wet surface the security of Terrain Response gravel setting was reassuring and enabled us to sit back and enjoy the vast swathes of wilderness as we crossed the Arctic Circle on July 3, a big journey landmark. 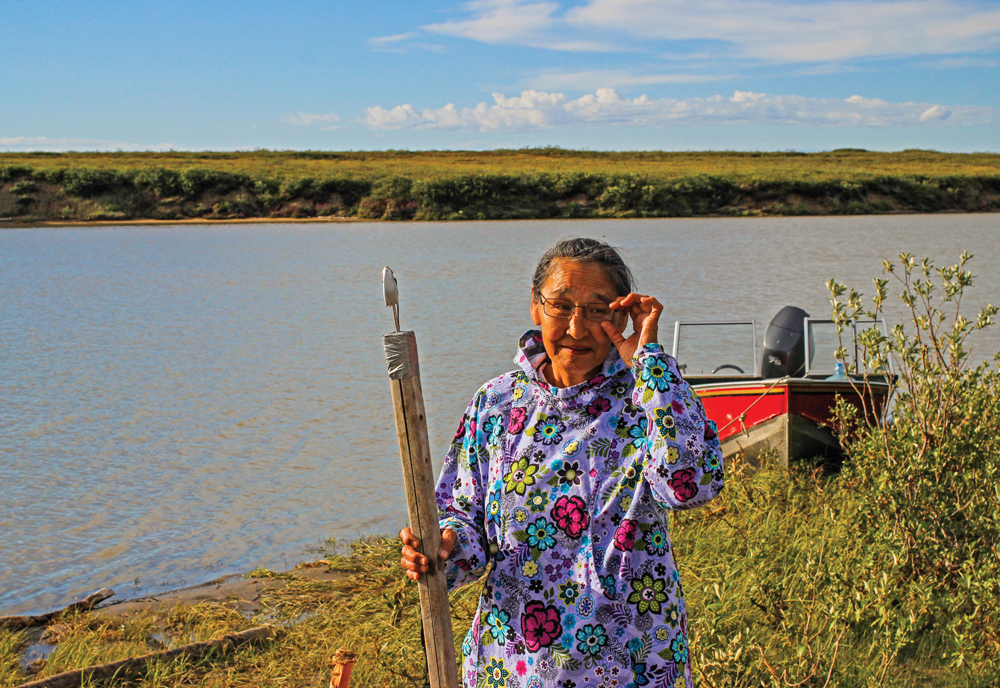 At Inuvik, we took a light aircraft up to Tuktoyatuk right up there on the Beaufort Sea. It was surprising to see the local Inuit kids swimming until a quick check of the thermometer showed 28C! Two elderly ladies who sat close to a burning brazier (the smoke keeps the bugs away), offered Liz tea. ‘‘Are you acquainted with the Queen?’’ they enquired! 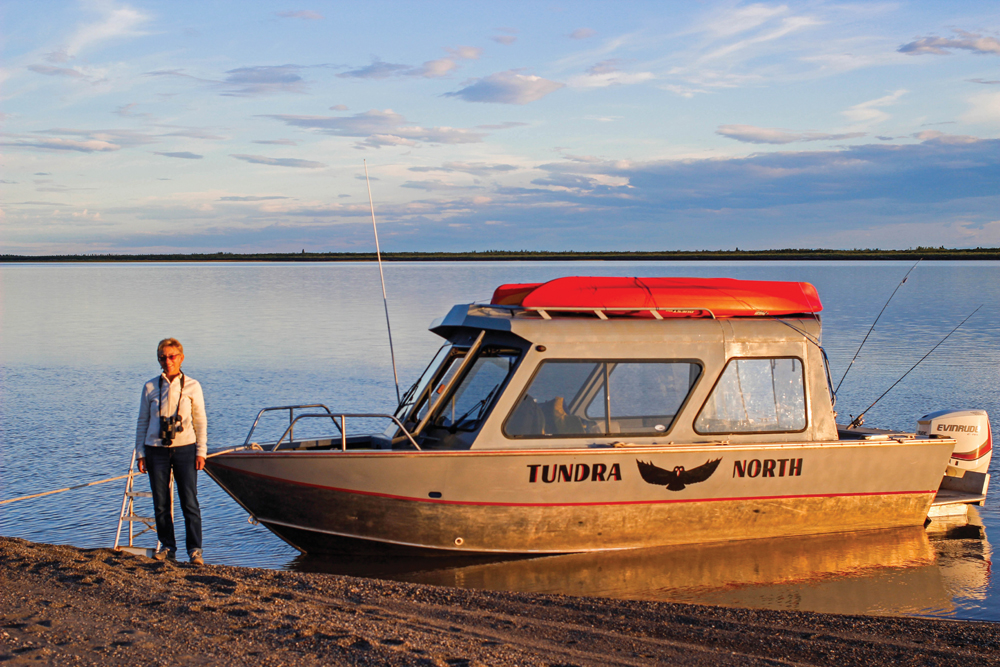 A very tiny boat for such a long and remote journey

Our guide, Gerry, offered to take us back to Inuvik on the Beaufort River with his six-seater boat via Reindeer Station and entertained us with fascinating stories of daring do, hunting and igloo building of his childhood and teenage years in the 1950s and ’60s. This was travelling at its best. We got back to Inuvik at 3.00 am in the morning, the sun still high in the sky. 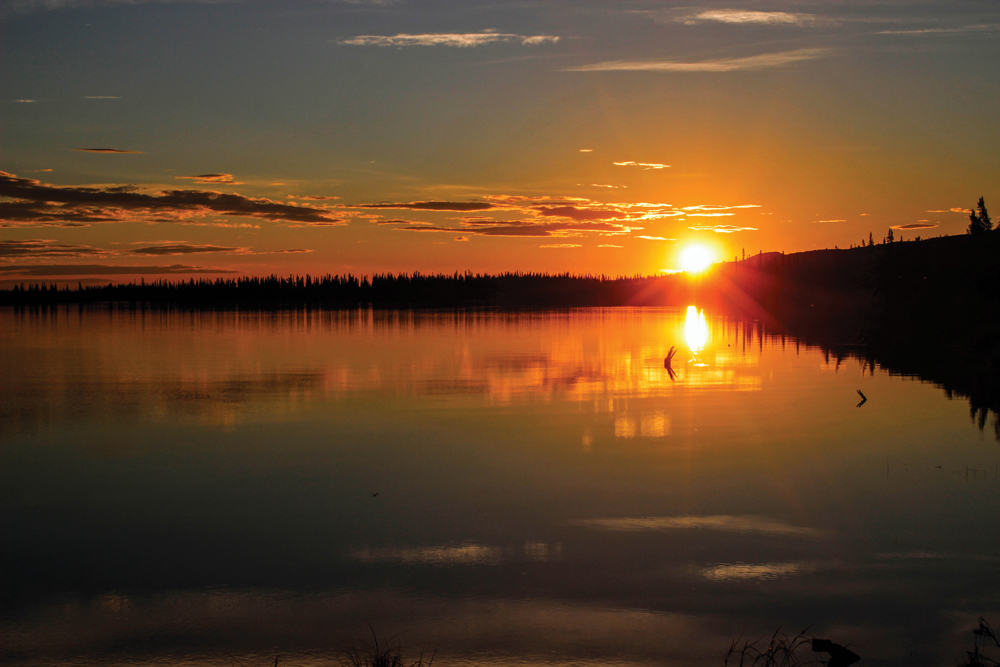 Midnight on the Mackenzie

The Arctic is a hard act to follow. However back down the Dempster Highway, we stopped at Dawson City, famous for the Klondike gold rush. It still has many of the original wooden buildings and a real frontier town atmosphere. 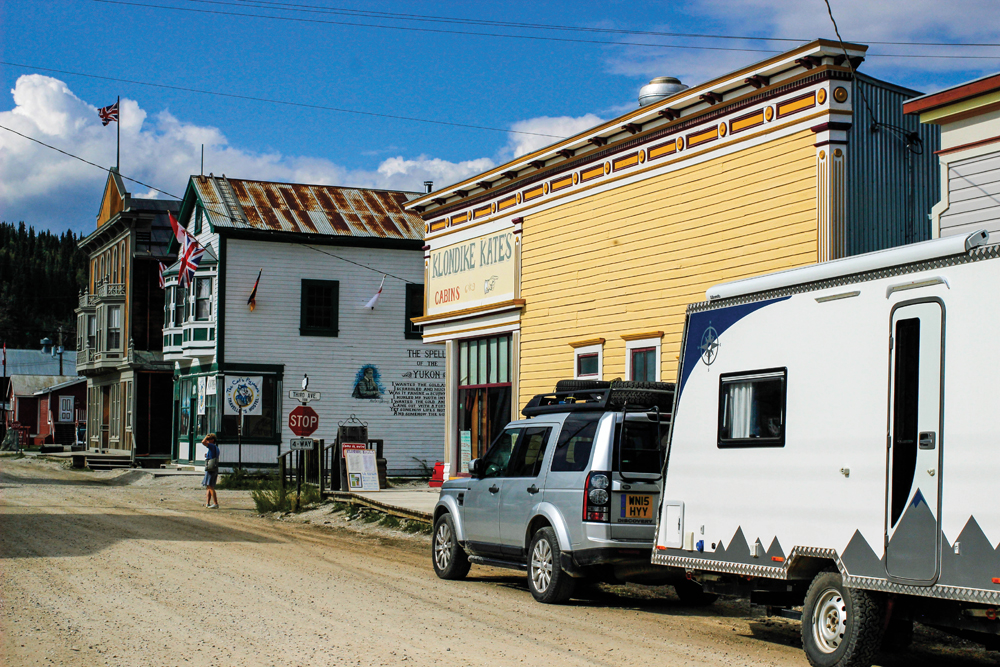 A short ferry ride across the Yukon River is the aptly named Top of the World Highway, a dirt road that literally skims the peaks, offering stunning wide open views with equally stunning wild camping sites. From there it’s all literally, downhill, passing small settlements with uplifting names – Eagle, Horse, and, er, Chicken (it was originally called Ptarmigan but the locals couldn’t spell this). We checked and double checked our TIP and travel documents as we approached the remote US border for Alaska. We needn’t have worried as the officials were surprised and delighted to see us and we entered the USA to waves of ‘‘good luck’’ and ‘‘safe travelling’’.

After the long journey across Canada and up to the Arctic, it was a perfect contrast to take the Alaska Marine Highway, a ferry service which is part of the US road network, south.

First stop was Juneau, Alaska’s capital (strangely with only sea and air access), to see the huge Mendenhall Glacier. But really, it was the small islands of Wrangell and Ketchikan that offered most interest. Travellers are offered small free campgrounds with spectacular views.

We took to the many gravel tracks for day trips in the Discovery, to explore a pristine environment, seeing virtually no one.

Sailing further south towards Prince Albert, Canada, the ferry was surrounded by at least a hundred humpbacks as we passed through their feeding grounds.

We headed south after a trip to see family on Vancouver Island, Canada. US Immigration and Customs was carried out here before we were loaded onto the ferry for the trip through the San Juan Islands to Anacortes, USA. Entering on  October 17 it was evident that winter was arriving; heavy snow greeted us as we left a tour of the Boeing factory in Seattle and headed over the Rockies on Interstate 90. 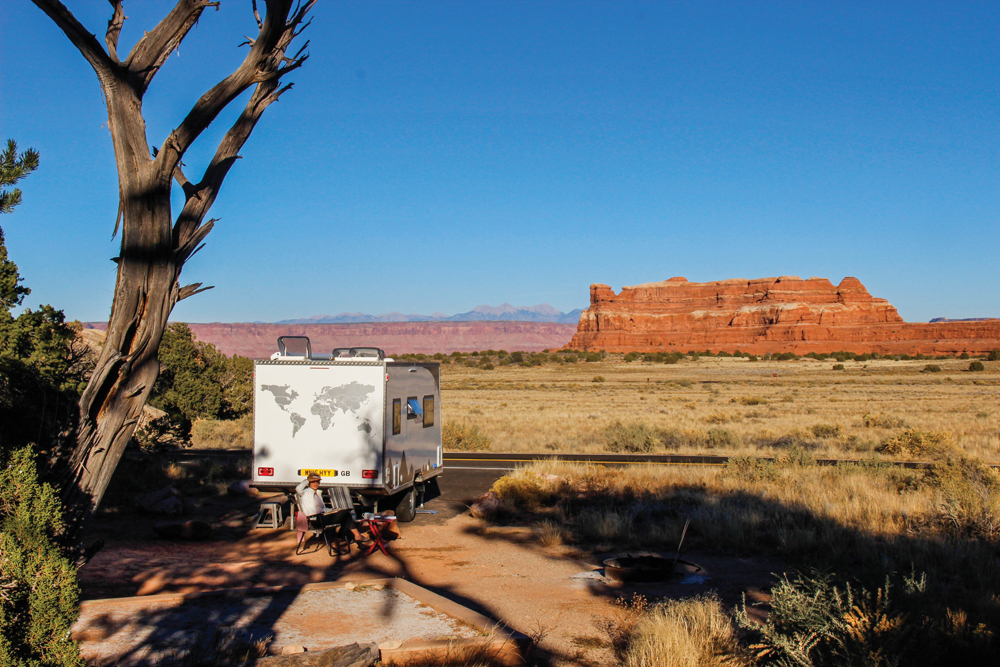 Once again, the Discovery made easy work of towing as the quick dash south ensued, briefly stopping at Craters of the Moon, Idaho before arriving to an Indian summer in Utah.

This area is both scenically amazing and a playground for off-roading, time to check out the Discovery 4’s capabilities. What a choice: Hell’s Revenge, Shafer Trail, Klondike Buffs, Onion Creek and Fisher Towers, White Rim, Elephant Hill. We did Onion Creek with the caravan, the White Rim in the Discovery, an incredible two-day drive, and many others, all rated easy to moderate.

We weren’t going to damage the Disco as it had to do another 200,000 km yet to get us home! So sadly Elephant Hill will have to wait for another day.

First stop was Adventure Trailers in Prescott, Arizona to carry out some modifications to the caravan air suspension. They did a superb job which was thoroughly tested in South America.

Whilst there we also met Scott Brady and the editorial team from Overland Journal who are on the same site. Lots of interesting stories. 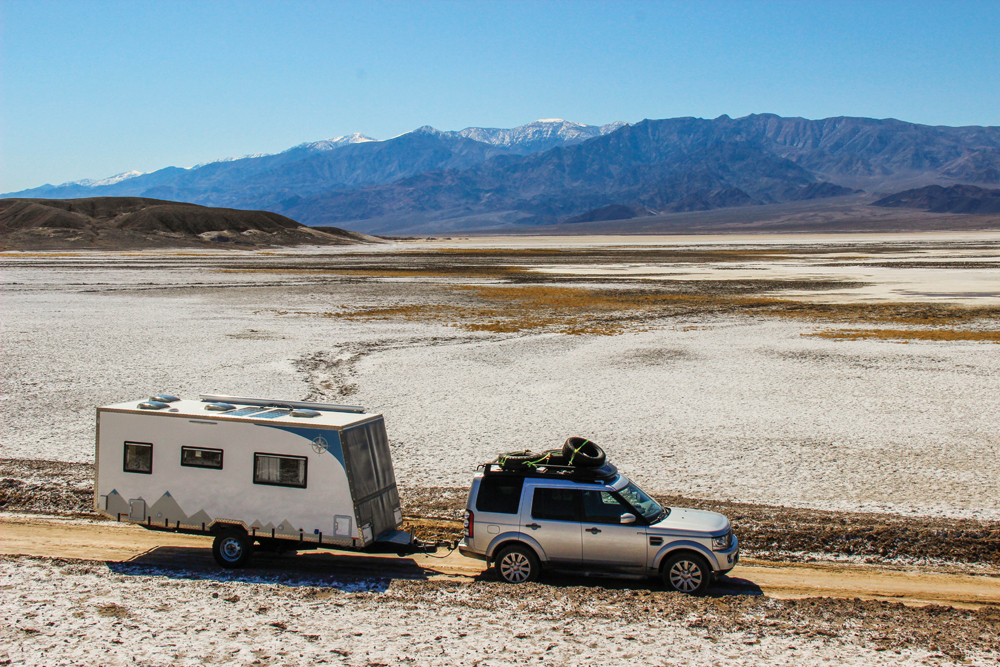 Christmas was spent wild camping on Bureau of Land Management land just north of the Yuma Proving Grounds before heading to Borrego Springs, where the public library had a 3D laser printer!

After years of drought torrential rain ensued. Mud slides cut off the Big Sur and moved the famous Bixy Creek Bridge on its foundations, we were one of the last vehicles across before the police closed it to all traffic. Just as well or we would have been completely cut off from the rest of the USA!

In Las Vegas, Land Rover carried out the Discovery’s annual service (no surprises), they gave us a loan Discovery Sport for the day and I took the opportunity to fit a set of Goodyear Duratrac tyres.

After a month of glorious weather the temperatures starting dropping so we headed for the North Rim of the Grand Canyon. Here our stay was cut short when a Ranger told us heavy snow that night would block the roads and they won't be cleared until February. Time to make a sharp exit and join the snowbirds.

It was then on to Death Valley to meet up with friends and some serious walking. Here I noticed that the off-side outer CV boot was split. I called Land Rover Las Vegas who replaced it under warranty following day.. The worldwide LR warranty certainly works.

The caravan had to be suitable for hot and cold climates and rough dirt and gravel roads in South America, Africa and Australia. So a European caravan wasn’t going to be suitable. As luck would have it we were visiting Australia, the home of off-road caravans, for the wedding of our niece in New Zealand. Unfortunately this didn’t identify a suitable caravan; hence the decision was made to build our own.

The body is a sandwich composite construction using a mixture of different densities of foam bonded to fibre glass sheet inner and outer skins, the whole lot is bonded together to produce a very strong and stiff body.

The interior is loosely based on a Lunar Clubman, with a stretched end bathroom, cassette toilet, shower and two wardrobes, centre kitchen with fridge, hob and oven, microwave and a front lounge which makes up into a queen double bed. Electrical and propane hot air central heating and hot water system, 240 V air conditioner. The electrical system comprises two 100 A/h lithium-ion batteries, 80A charger and 2 kVA invertor.