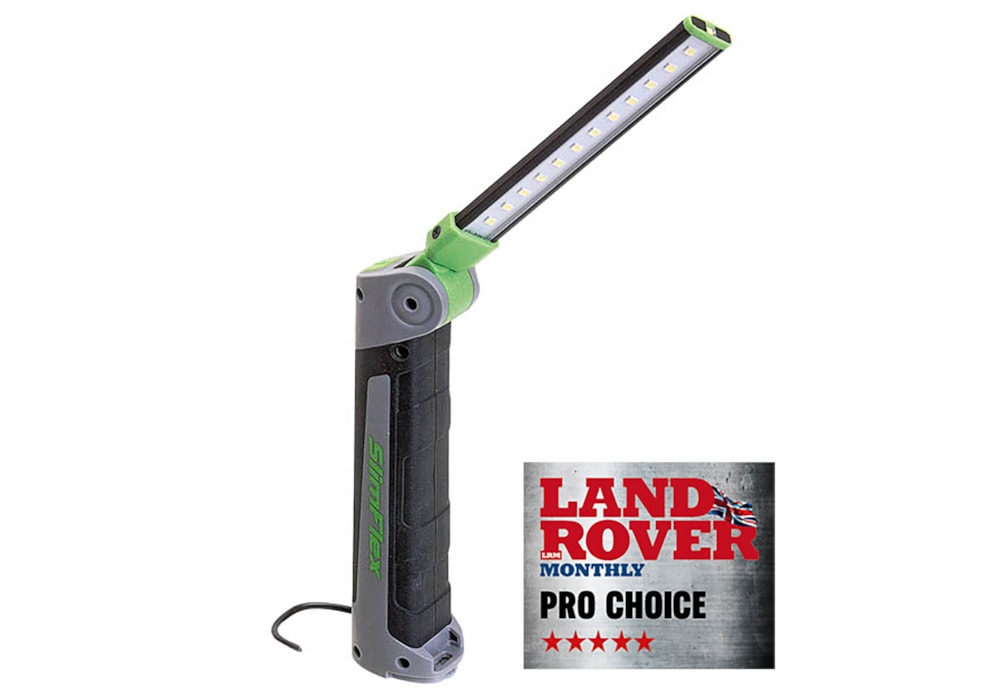 We test the latest, brightest slim LED lights to help you work on your Land Rover

If you thought cordless LED inspection lamps had peaked with their succession of ever-brighter designs, you’d be wrong. Apart from the different LEDs, we’ve also seen mounting options improve massively, with a versatile range of magnets, joints and hinges now available. What’s more, makers are now putting those super bright light emitting diodes in thin, ruler-like strips, so even the narrowest gap can be illuminated. But how does this latest line-up of slender light blades match up against more conventional designs? We gathered eight to see which shone brightest.

Bright, wide and even beams score the most points, with extra output modes a bonus.

We gauged stamina by running each lamp on full until output dipped below a pre-determined level, or the unit shut off. We assessed hooks, magnets, twist joints or stands, and checked how easily our products illuminated narrow gaps.

If the lamps have to be hung, we considered if pivot and twist joints can still be used for aiming. Value was calculated using prices from the internet. 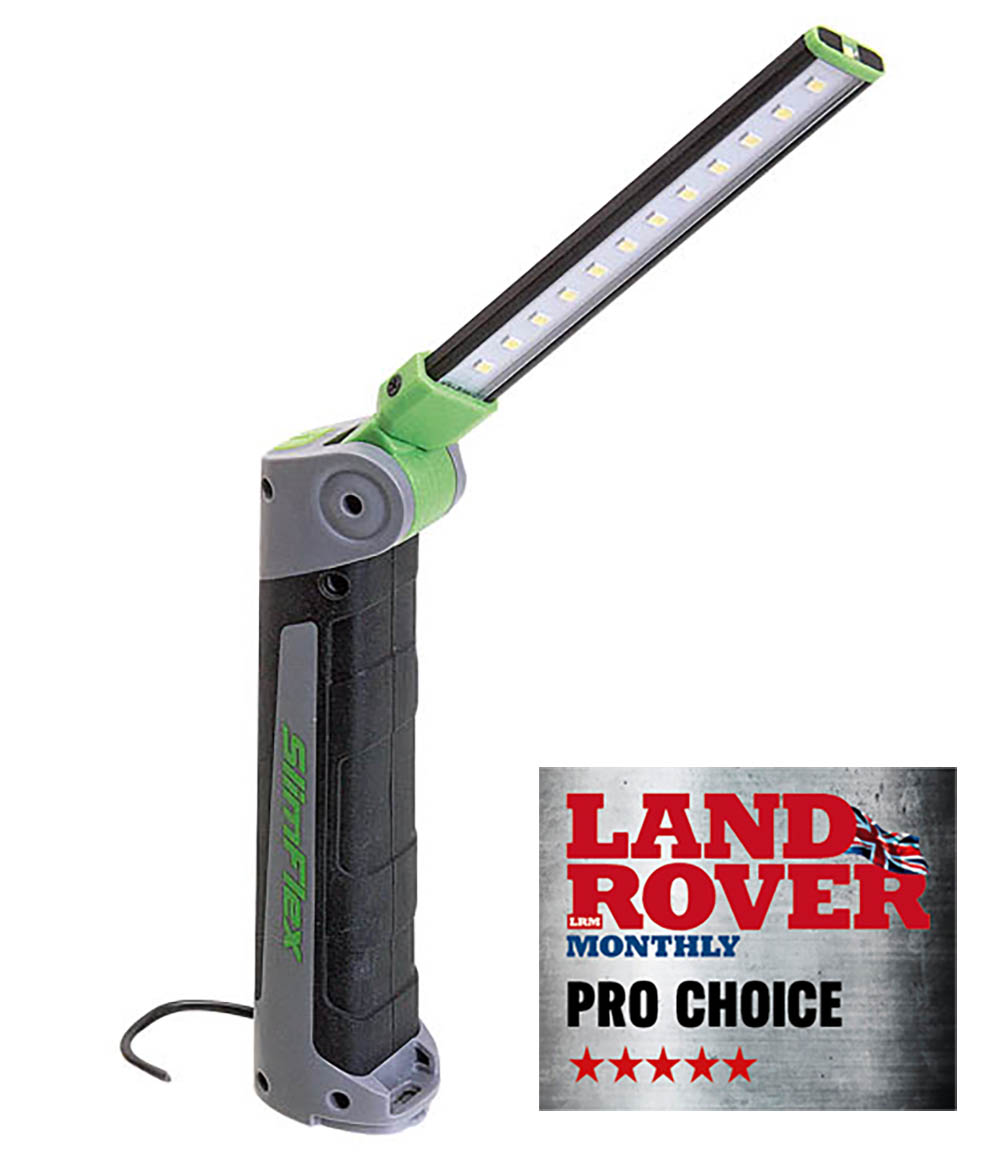 Sealey's slightly oddball LED180 simply trounces the opposition. Its narrow row of SMD (surface mount device) LEDs gives out an incredibly bright, even and wide beam. It took more than four hours before the light output dropped below our cut-off test limit, despite the neat dimmer control being set to maximum. And getting light exactly where you need it is a doddle. The narrow blade is pivoted against the lower part of the lamp, but also twists laterally. The base features three tough magnets, plus a sturdy hook. 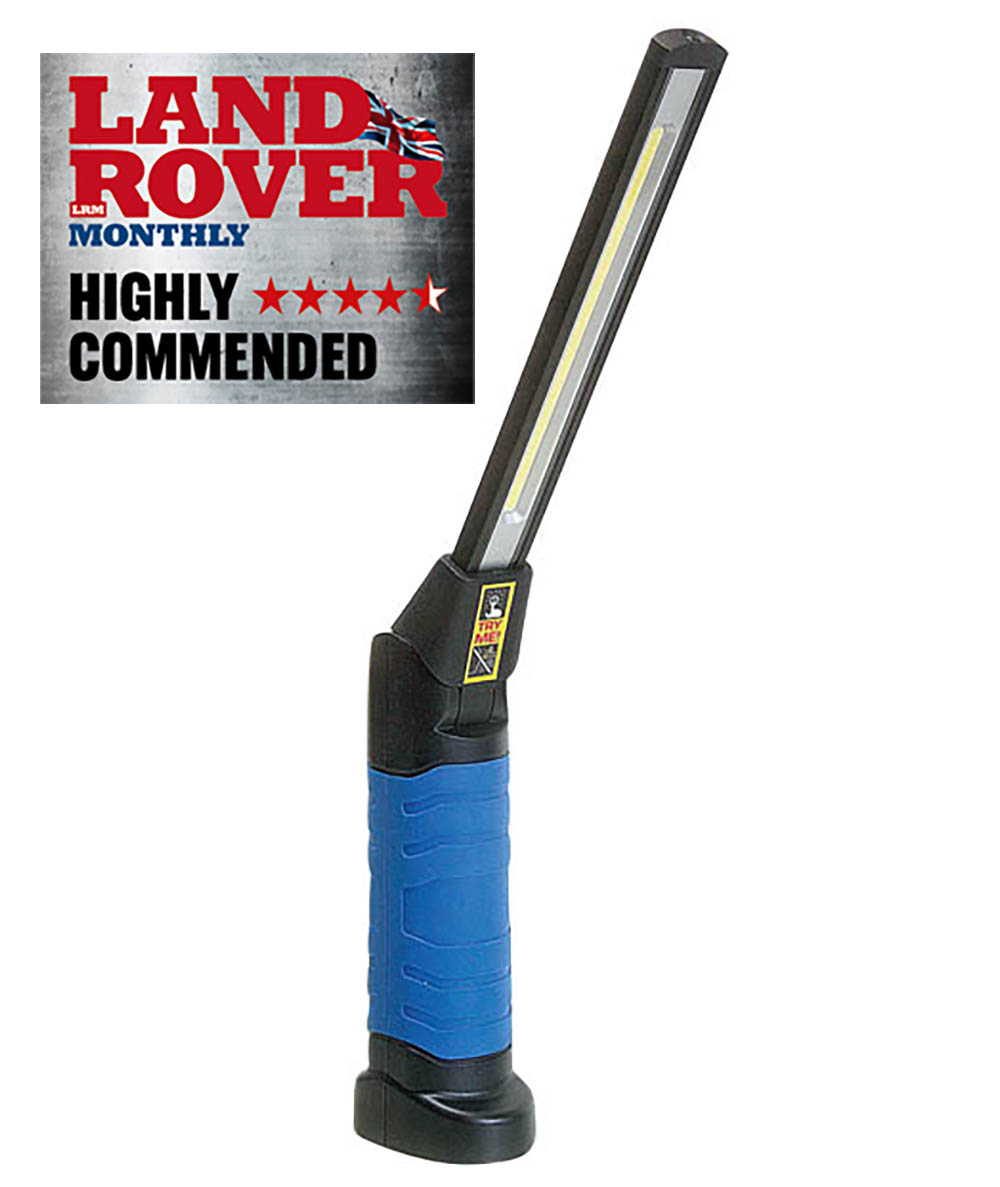 The incredible output of the Sealey LED180 surprised us, yet Draper’s lamp is even better. Its long COB (chip-on-board) LED produces a smooth, wide beam that’s brighter than the LED180’s. Used close up, it’s arguably a bit much, so we’re glad the lamp includes a more frugal and less intense mode, which Draper claims gives up to four hours of light. That’s more usable than the 130 minutes our test achieved at full power. We like the mains and USB charging options, but positioning is compromised by the fact there’s no hook and only one magnet. 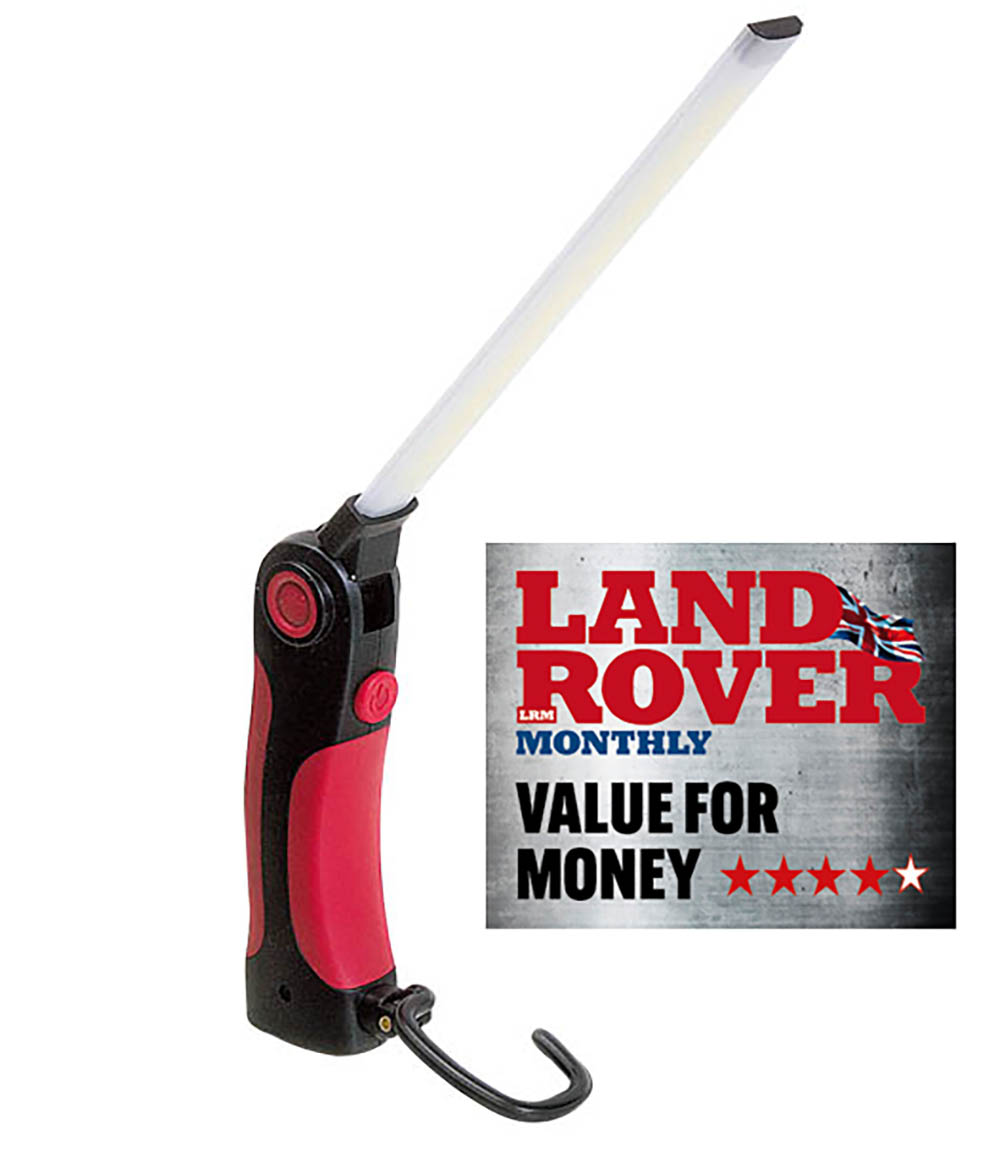 The cheapest of the three bladed lamps here and, in some ways, the most impressive. Unlike most other LED lamps, NightSearcher puts its retina-scorching diodes behind a diffuser to prevent accidental dazzling, and this gives a really wide, even beam pattern. Despite this great performance, it managed just over three hours between charges. You can charge from your car’s USB or 12-volt sockets, and the mains. The flat base, tough magnet and hooks give reasonable positioning options, but this isn’t the lamp’s strong point. 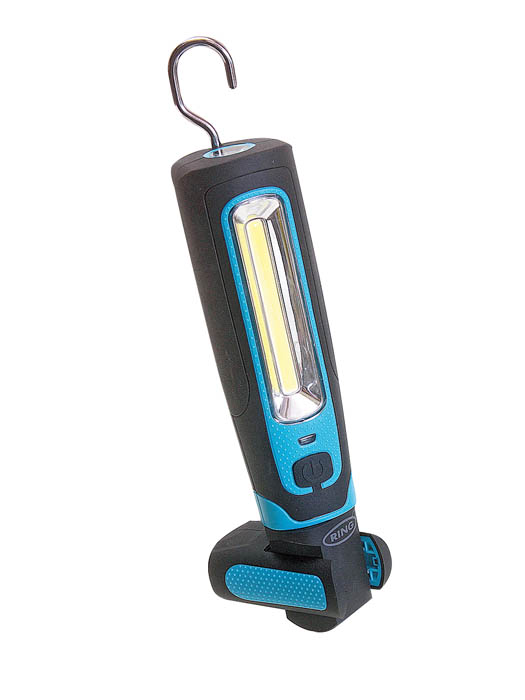 A previous Best Buy and still a favourite. Although the Ring boasts an incredibly impressive beam, it isn’t quite as bright or wide as those of its newer narrow-bladed competitors. While the run time of just under three hours is reasonable enough, newer models last for longer. But easily the MAGFlex’s best feature is its array of magnets and a twist joint that let you put the beam exactly where you need it. Yet Sealey’s LED180 does all that, too. Mains-only charging (12 V used to be included), the lack of a battery-stretching eco mode and a slightly increased price have blunted its competitive edge. 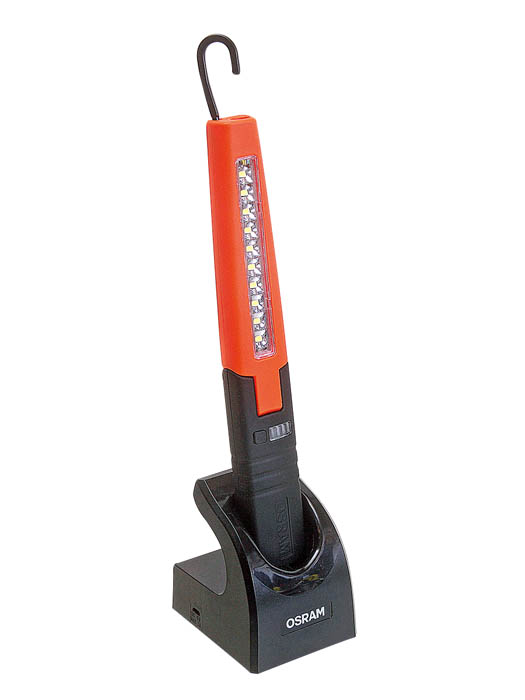 Although it is a little too portly to be a true narrow blade lamp, Osram’s Slimline 280 is long and slender enough to get into places that conventional chunky lamps simply cannot. The brand has played a similarly successful trade-off with light output. The beam is not as wide as some here, but it is certainly not restrictive or narrow. Reducing the spread actually means brightness is only a tiny step behind the three award winners; impressive considering the near four-hour run time. A handy charging pod is also supplied, and this can be hooked up to the mains or a USB power source, which is a plus. 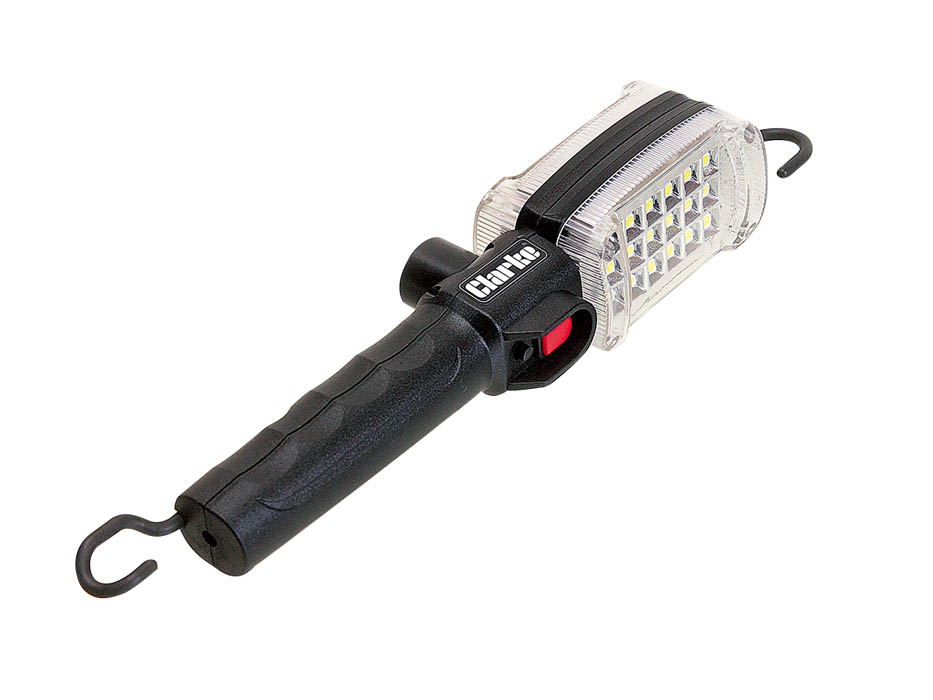 Thanks to the dated appearance and frankly bizarre front and rear-facing light clusters, we didn’t hold high hopes for this lamp. We certainly didn’t expect the Clarke to outlast every other product here in the stamina test. However, it was still going strong after four hours and, in reality, you probably wouldn’t have both sides running at once, as we did for test conditions. Initially, output intensity was more like most of the other product’s economy modes, but the beam is impressively wide and even. Positioning is this product’s main flaw, with the single tough magnet heavily recessed beneath one of the clusters. 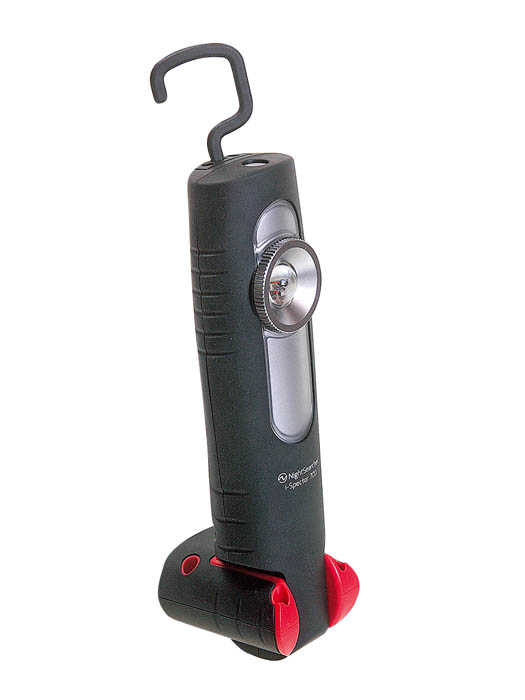 It comes to something when the light reflecting off the dark murk of a car engine or wheel arch makes you squint. But that’s exactly what the i-SPECTOR 700 achieves. Press once for the torch, twice for eco mode, three times for an impressive output, and four times for, well, pass the shades! Yes, max output is staggering, but is probably of limited use. It’s simply too bright and the run time only just limps past 90 minutes. Stamina is dramatically improved on the lower settings, squeezing up to eight hours’ run time out of the minimum output, which is still very respectable. 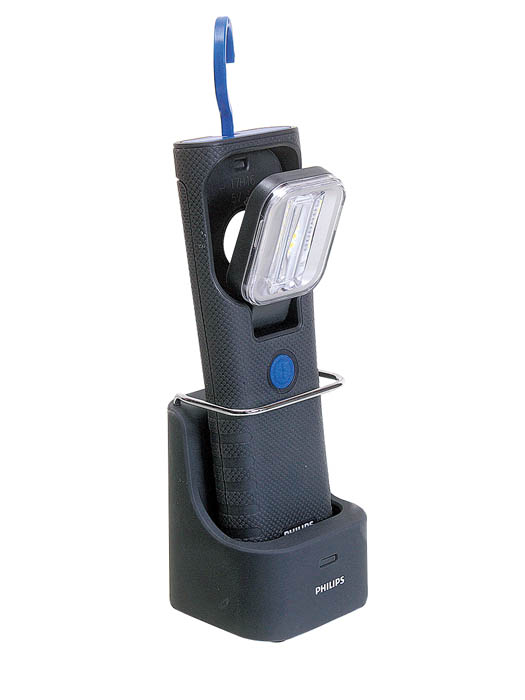 In a heavily-used trade setting, we suspect this lamp would keep going long after others were binned. Quality and durability are in a different league. You pay for it, but it’s worth the outlay. Light output is respectable, as is the run time of just under three hours at max output. But what we really like is the way the LED strip can swivel out up to 90 degrees from the body. This gives plenty of beam-aiming options  if you have to use the hook, or simply laying the lamp on its back, instead of the integral magnet.

Sealey's LED180 is the best, and most versatile, of the new breed of blade-style lamps. The Draper 65395 is brighter, but only for a limited time. NightSearcher’s Star Blade is a great cheaper alternative to both models.