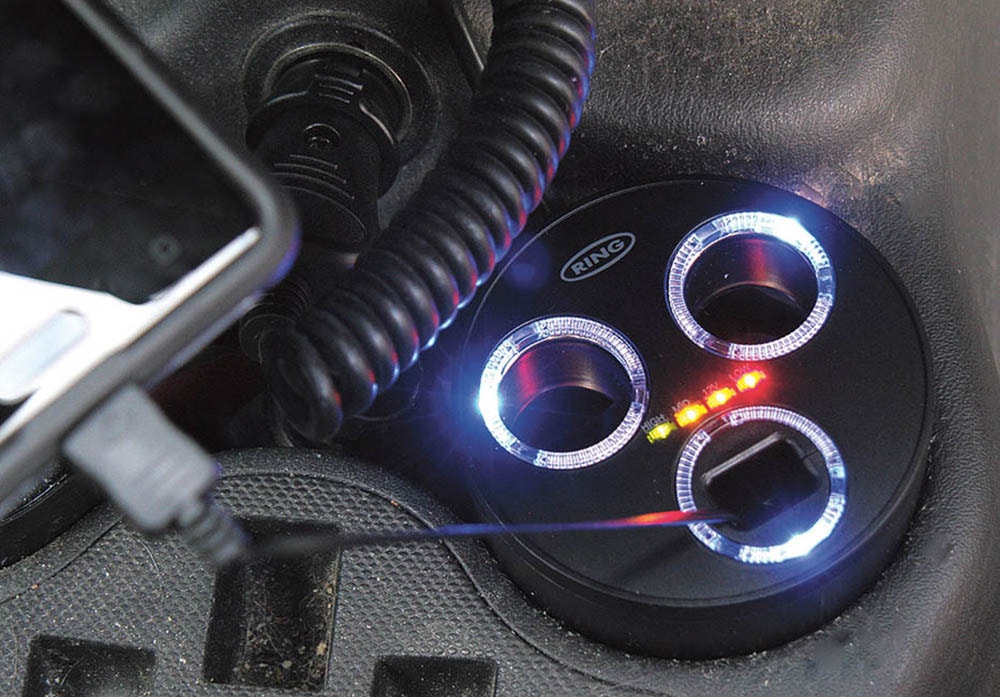 In this age of USB charging, adapters that convert a car’s 12 volt power socket into several more may seem old hat.

For these, adapters which increase your 12V socket count and provide USB outlets make more sense than those that just offer the latter, and remove the use of the socket at the same time. So which are the best? We plugged in eight products to find out.

We started by making sure that the maximum output matched the sockets on each unit, plus we looked for at least one 2.1 amp USB connection to cater for tablets. We also wanted leads that were of a useful length, as well as a way of attaching the units securely.

Power indicators were also useful and we liked to see battery charge level monitors – handy for making sure power-hungry devices like cool boxes don’t sap your car battery too much when the engine is off. The final factor was price from online sources. 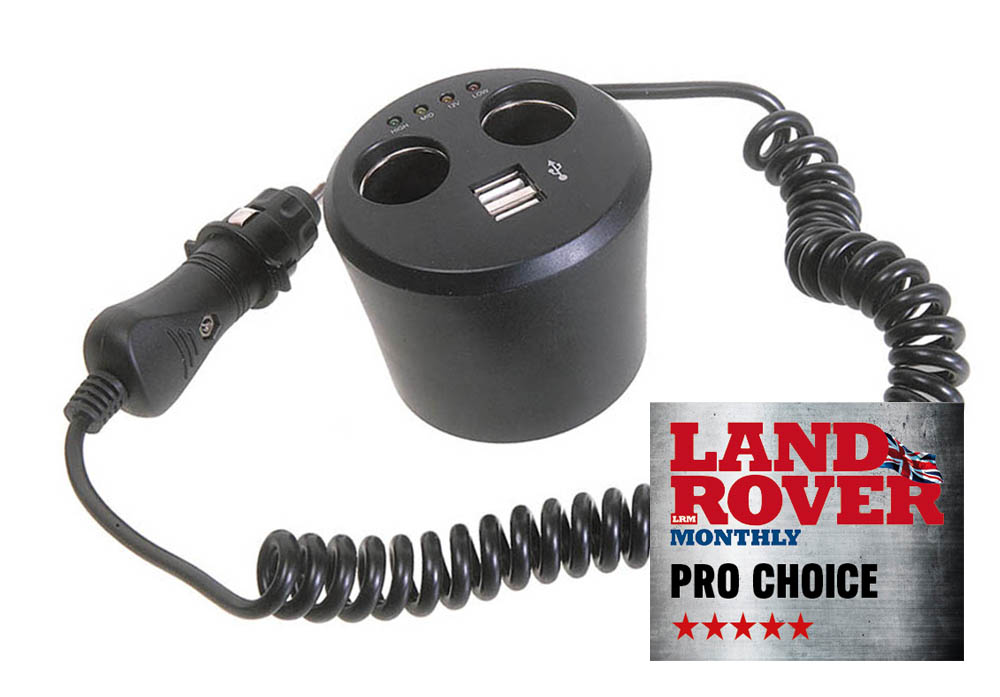 ThIs Halfords unit is one of the easiest here to position and secure; it’s designed to sit in a cup-holder and comes with a coiled lead that stretches out to a metre.

We liked the generous 10 amp maximum current, the battery level monitor and the plug’s securing ring that prevents accidental power loss. Our only gripe is that the USB ports are limited to one amp each. 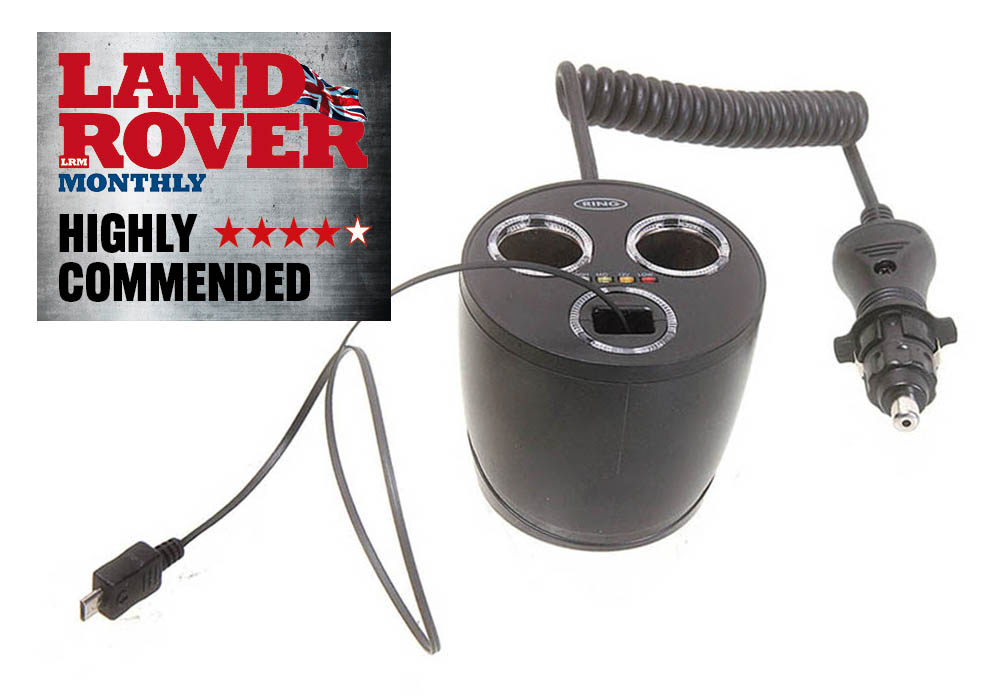 Closely related to Halfords’ winning adapter (above), practically everything we liked about the 131253 – the decent-length coiled lead and cup-holder friendly shape that make it easy to stash away securely – are carried over to this design, too. But instead of two USB sockets, there’s a single USB micro plug on a 60 cm lead. That’s handy for charging most phones and tech gadgets, but does mean it’s not much use for Apple devices. 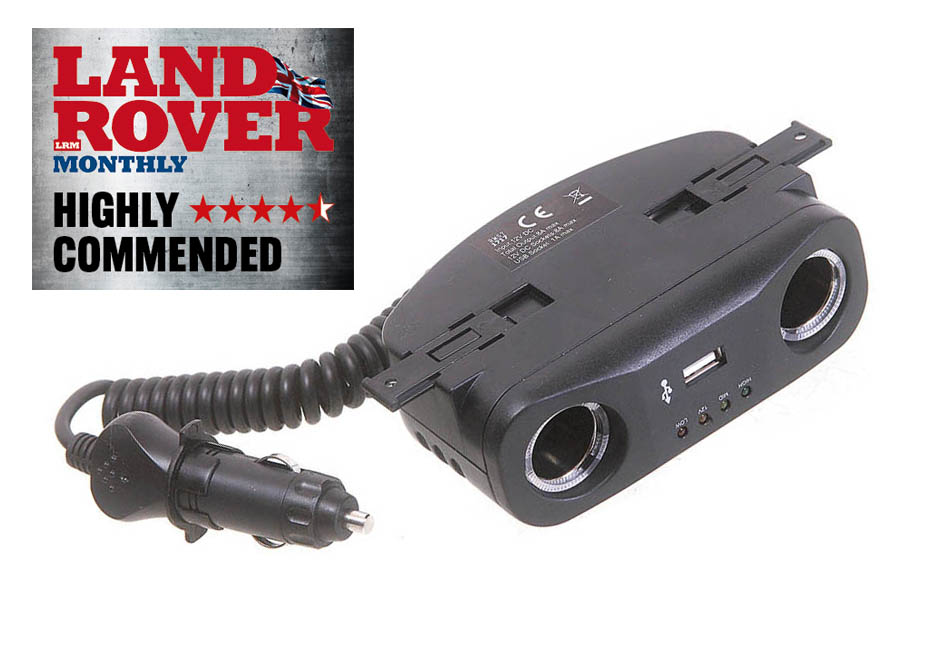 Essentially this is the Halfords 131253 (top) in a non-cup shape. Peak output drops slightly, but is still 8 amps, and a battery monitor is included. The coiled lead takes a lot of force to stretch it to a practical length, although it’s not an issue if the RMS7 is secured by its slide-out tabs. If not, the unit has to sit close to the power socket. At least the securing ring on the plug means any strain on the cable is unlikely to cause a loss of electrical contact. 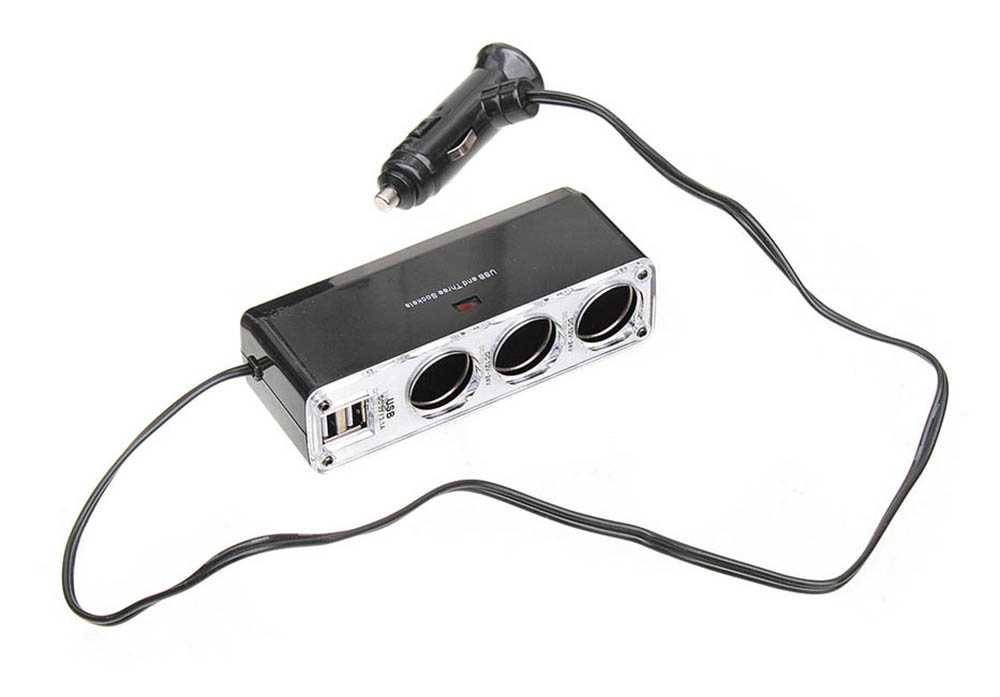 This dated design has been given a new lease of life by beefing up the two usB sockets (max combined USB output is 3.1 amps) so the unit can charge most tablets. But in other respects, it shows its age. A top-mounted Led indicates whether it’s live, but forget niceties like illuminated sockets. While three 12V sockets are included, the maximum output is a measly five amps. We suspect this is due to the supply cable, which is a little on the short side at 60 cm. 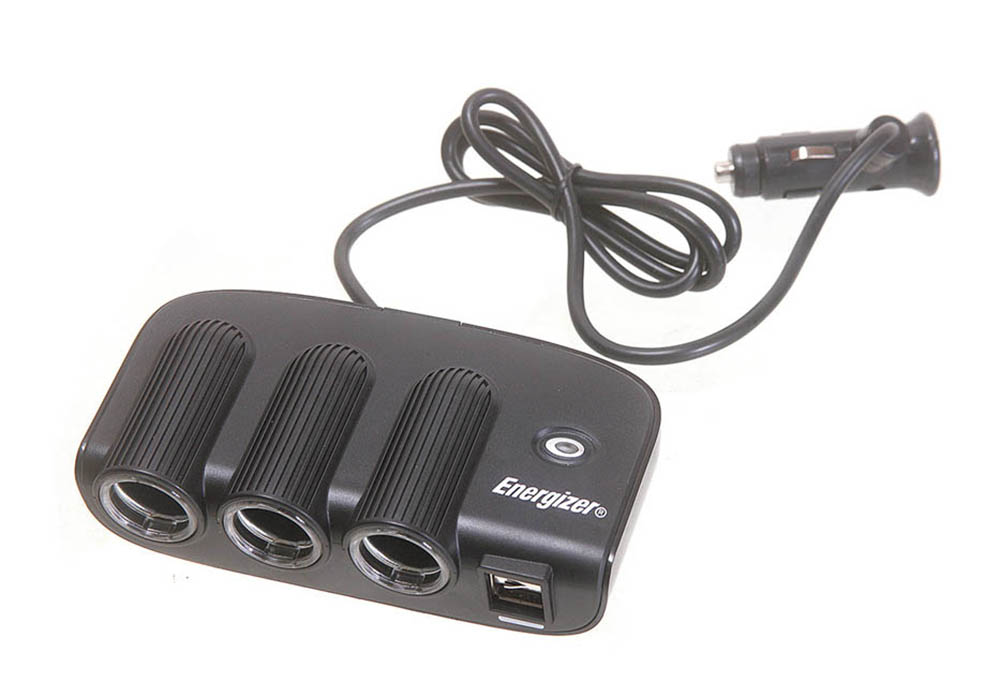 The 50505 is a previous recommended product and is still a great all-rounder that covers the basics well. The high-output 12V supply means the three sockets aren’t restricted to low-power items only. It’s the same story with the usB outlets: one throws out one amp max, the other outputs a tablet-friendly 2.1 amps, while an Led confirms the unit is live. A one metre cable allows flexibility when positioning, but it’s needed because there’s no way of securing the 50505 in place. 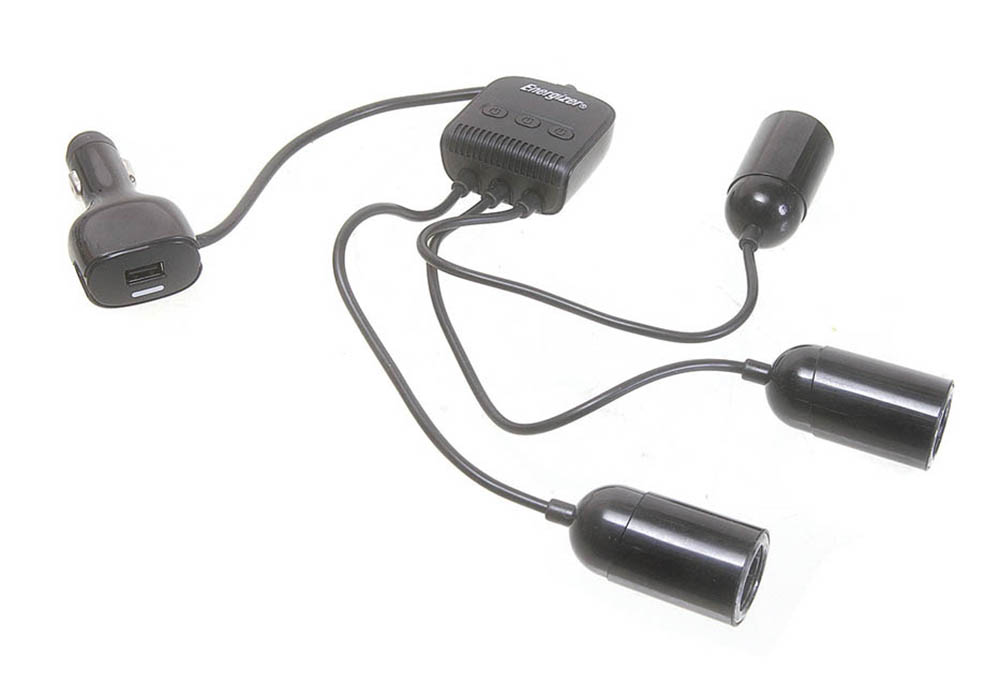 EnergIzer 50503’s layout works well in cars lacking in power sockets. The 20 cm cable between the power plug and the main box makes the unit easy to stash around the centre console. The three sockets are at the end of 22 cm leads, so they can be routed to either front or rear seats. Individual switches on the central box let accessories be turned off without having to unplug them. But the tablet-friendly USB socket is on the back of the power plug, which reduces practicality. 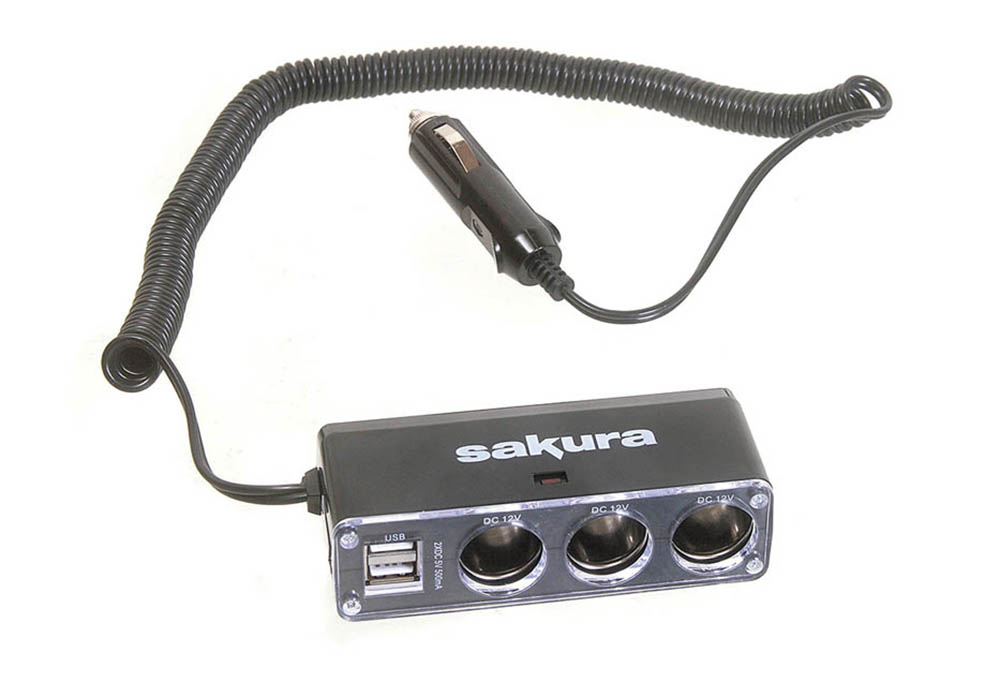 Lifetime cars’ triple socket is an old design brought up to date, and this is the original version. It has two USB outlets limited to half an amp each, which rules out charging most tablets. Even phones and frugal gadgets will charge slowly. Things aren’t better with the 12V sockets, as the peak combined output is restrictive for a three-outlet adapter. But it’s easy to use, an adhesive pad secures the unit in place and the lightly-coiled power lead easily stretches to more than a metre. 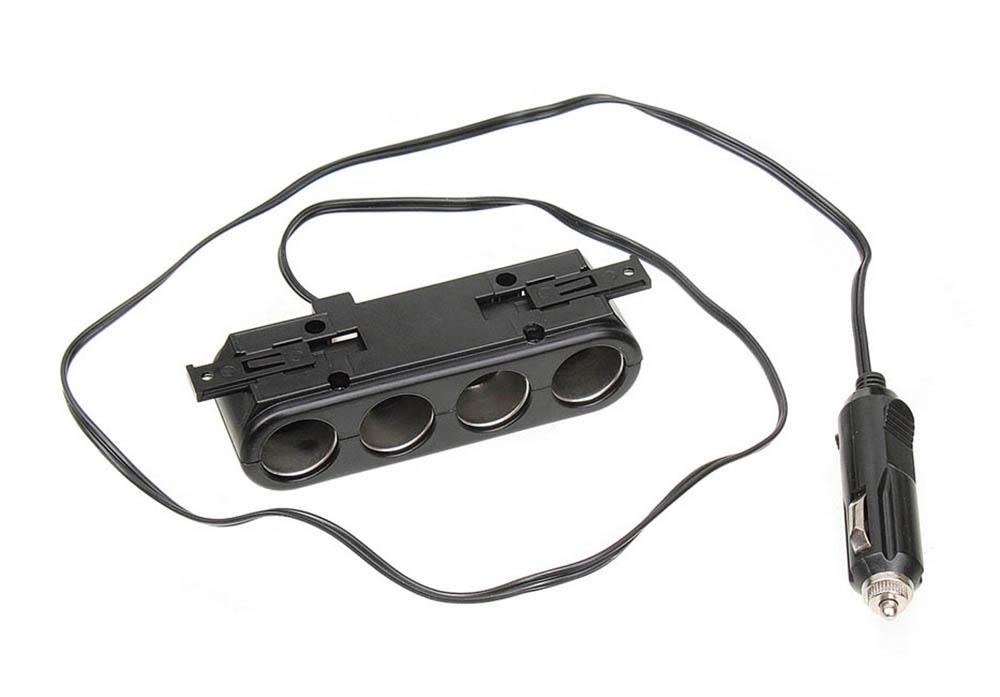 All Ride multi socket with plug

On paper, this is perfect for running several 12V gadgets. Yet the low maximum output is restrictive for two outlets, let alone four. The problem seems to be the thin power cable; at least it’s a metre long. This allows some degree of positioning flexibility, while the unit also has slide-out tabs so it can be screwed into position (if you buy screws); none are supplied. Other moans are the lack of USB outlets and the live indicator being out of sight if the securing tabs are used.