Neat devices convert battery voltage DC to 240V AC to charge all manner of kit in-car. Dave Pollard finds out which is best

We’re relying more and more on our portable electronic gadgets, all of which demand constant power or charging. A power bank is one answer, but it won’t help with larger items and this, too, could go flat.

For more versatility, an inverter, which converts 12V car power to 240V electricity, is extremely useful today. It is even more handy when spending longer periods away from a 240V supply, such as expeditions or camping. It can also be used to power hand tools, or to provide campsite lighting, especially when used with a leisure battery on the vehicle, supplied via a dual-charge system.

We connected a selection of portable devices, including an iPhone, iPad, Android phone and an HP laptop. We logged whether the USB socket (where fitted) was Apple-friendly. Then we added a couple of items of garage equipment in the form of a 24-LED lead light and an 18V battery charger. We recorded how they coped, measured the fan noise using a decibel meter app and voltage when powering a 60W bulb.

Larger inverters need to be secured or stored so they cannot become a flying missile during an accident. Land Rovers have plenty of locations for inverters, but always ensure adequate space and airflow so the heat they generate in use will be safely dissipated. 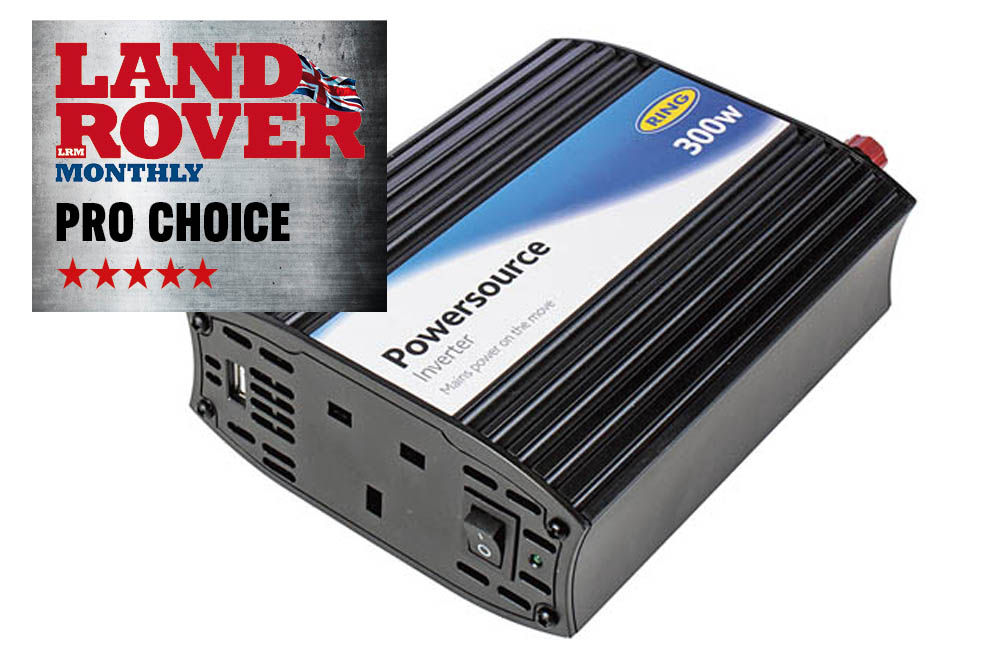 Ring’s RINVU300 inverter receives our Pro Choice award, but the competition is close at the top. As ever, the fan comes on instantly and was only slightly quieter than the Bestek’s. Throughout the tests, this inverter remained stable except when we added the laptop and charger, when the RINVU300 slowed a little before continuing. We liked the lightweight 496g, 93cm long leads and the Apple-friendly 1A USB connection. But another USB port would be a good addition and it should be straight through, because at the moment, it’s necessary to power up – and get the fan noise – to use the USB. 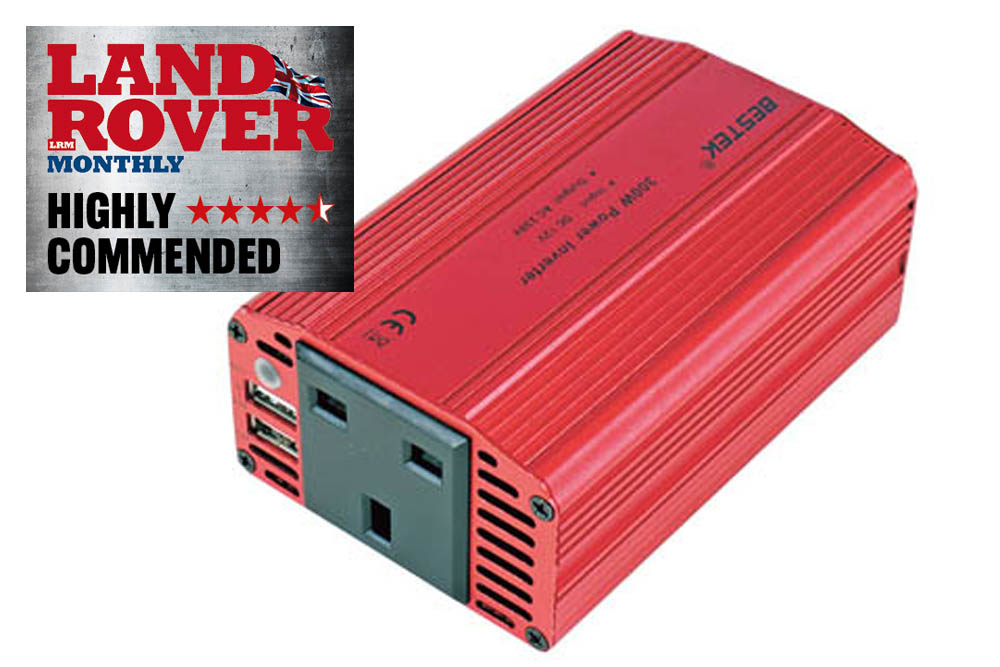 As with the Ring RINVU300, the Bestek fan is always on and a noisy 16dB above the ambient level. We liked the twin 2.4A USB sockets, which were straight through and so worked when the unit was switched off. It produced 211V with the bulb and handled all our test products. The Bestek stumbled a little at first as we added more gadgets, but it ultimately came up with the goods. Its stylish red finish, plus the compact 12cm size and light 465g weight, mean this unit is a contender for your cash. 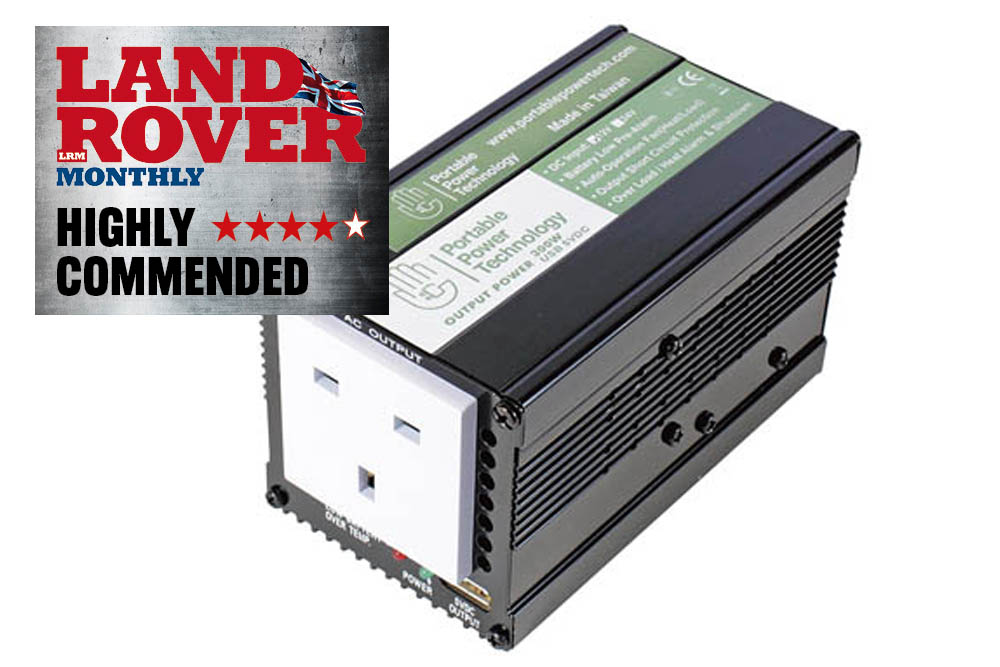 This well-made unit weighed a mid-range 614g and was the only one to have both 12V socket and crocodile clip connections, making it very versatile. But both leads were 72cm and could have been longer. The single, Apple-friendly USB was rated 2.1A and the two-year warranty inspired confidence. It powered our devices, despite a voltage on the bulb of just 195V and the fan stayed silent, suggesting it was always within its limits. 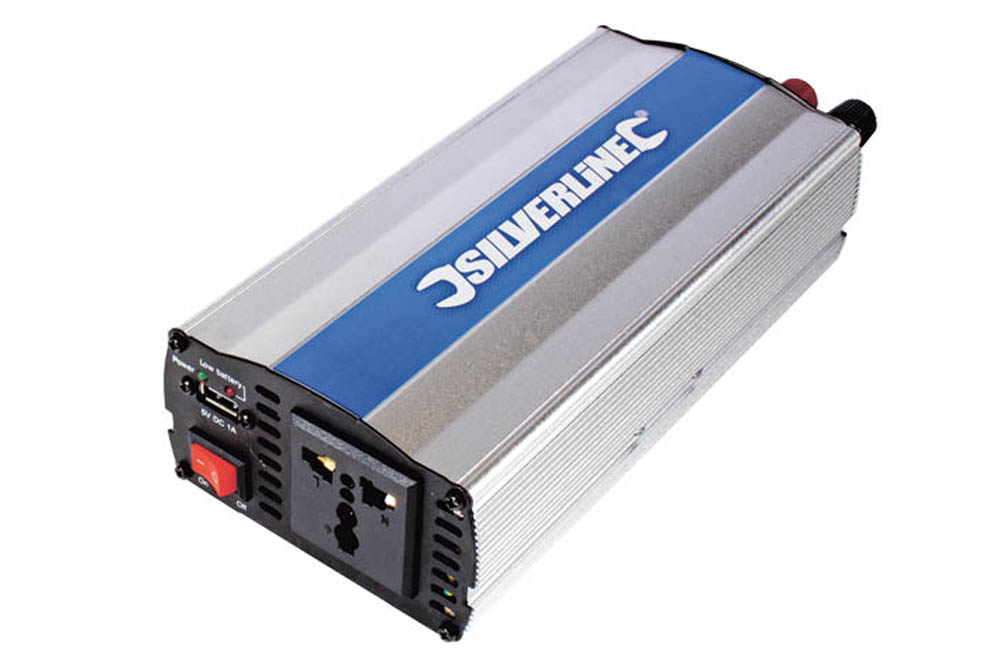 The Silverline was the heaviest inverter on test by 200g, at 975g, and had the highest claimed maximum output, at 700W. Annoyingly, the crocodile leads were the shortest here, at just 66cm, and it was surprising to find that the single USB port didn’t work with Apple kit. When powered up, the 263764’s fan remained silent all the way up to the laptop, when it cut in a little. The fan spun a touch more when we added the charger, but even then, it added just 5dB of noise to the ambient level. A contender if you need a big output and can live with the weight and the leads. 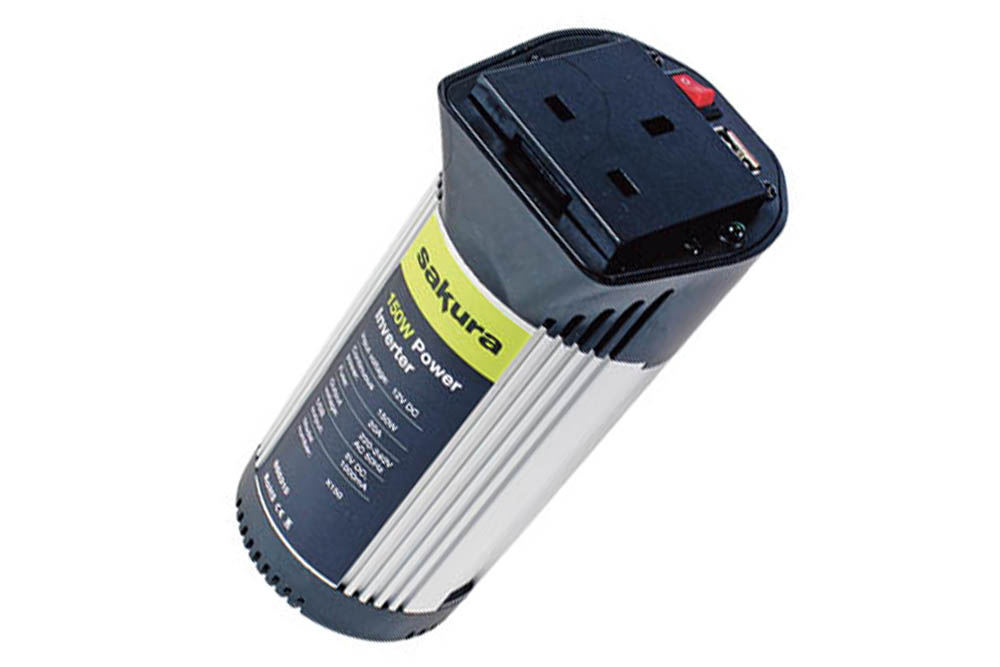 Sakura's inverter is designed to sit in a cup holder, as with the E:Can. However, the SS5310 differed in several ways from the Ring product, not least its much lower price and slightly increased diameter. In addition, the Sakura had a longer lead, a rocker on/off switch and the USB socket was handily straight through. Oddly, where the E:Can produced 193V with the light bulb, the voltage with the SS5310 was a huge 259V. As expected, the Sakura was too low-powered to work the charger. The fan stayed off with gadgets requiring less power and only cut in when we connected the laptop, yet it added just 11dB to the sound level. 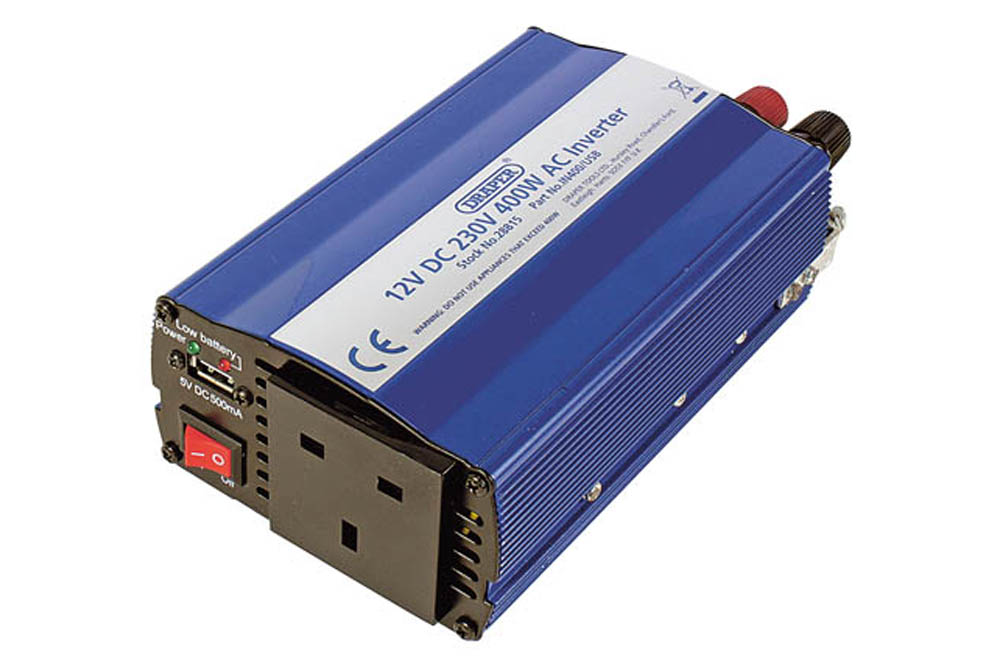 The first Draper entry came second only to the Silverline in both the maximum claimed wattage and weight, tipping the scales at a hefty 777g. In design and layout it’s fairly conventional and it connected directly to the battery using its excellent 105cm leads, which were the longest here. The single USB port didn’t like Apple. It was silent until we added the laptop, when the fan cut in, and when powering the charger, the fan worked harder still, with an ultimate noise increase of 20dB. Overall, though, there’s not much to complain about except for the unit having the highest price on test. 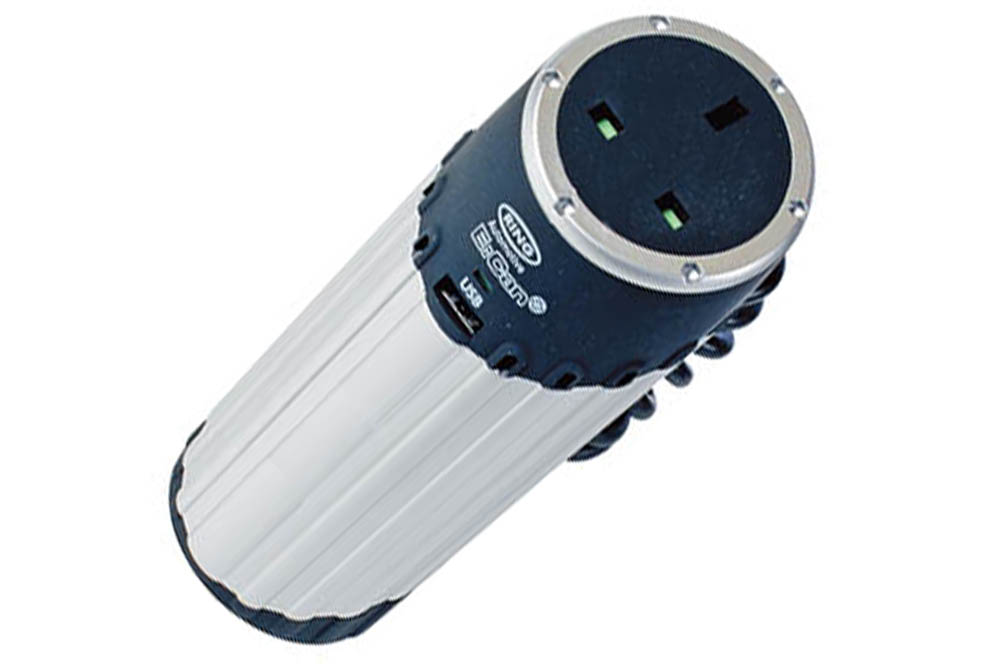 Ring’s E:Can was the lightest inverter on test and has been around for a while, so is showing its age. There was no on/off rocker switch and the fan started as soon as the unit was plugged in, although it was fairly quiet, with a noise increase of 10dB. The lead was the shortest here when stretched out, and because it was coiled, it created plenty of tension and in some cases, pulled the E:Can from the cup-holder. The USB worked with the Apple devices and it powered them and the laptop, after a little hesitation. Not surprisingly, the Ring product couldn’t power the battery charger. 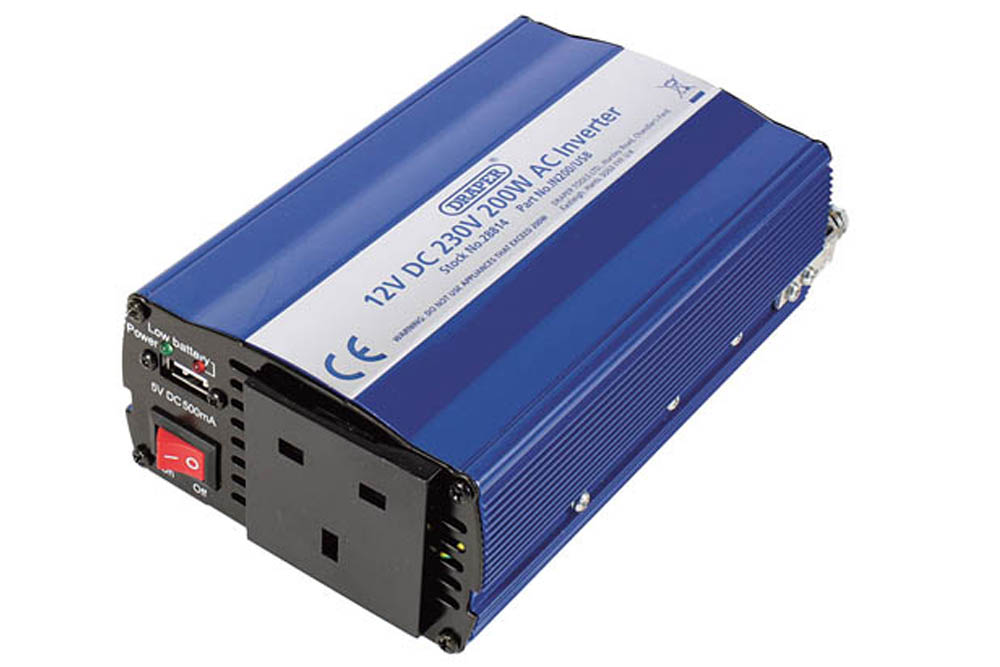 This unit looks similarly stylish to its big brother in deep blue, but the smaller sibling only connected using a lighter adapter and featured a single USB which wasn’t suitable for Apple products. The Draper weighs in at 722g, so it’s no lightweight, although the fan remained silent for the lower-drain items. It started up when the laptop was added, lifting the sound level by 20dB. Despite producing 255V on the light bulb test, it couldn’t hack the charger as well as the laptop. This was no great surprise, however, and the performance doesn’t match up to the price.

The Ring RINVU300 just stays ahead of the Bestek, although the competition is stiff, with the Portable Powertech 300W taking the second Highly Recommended position.