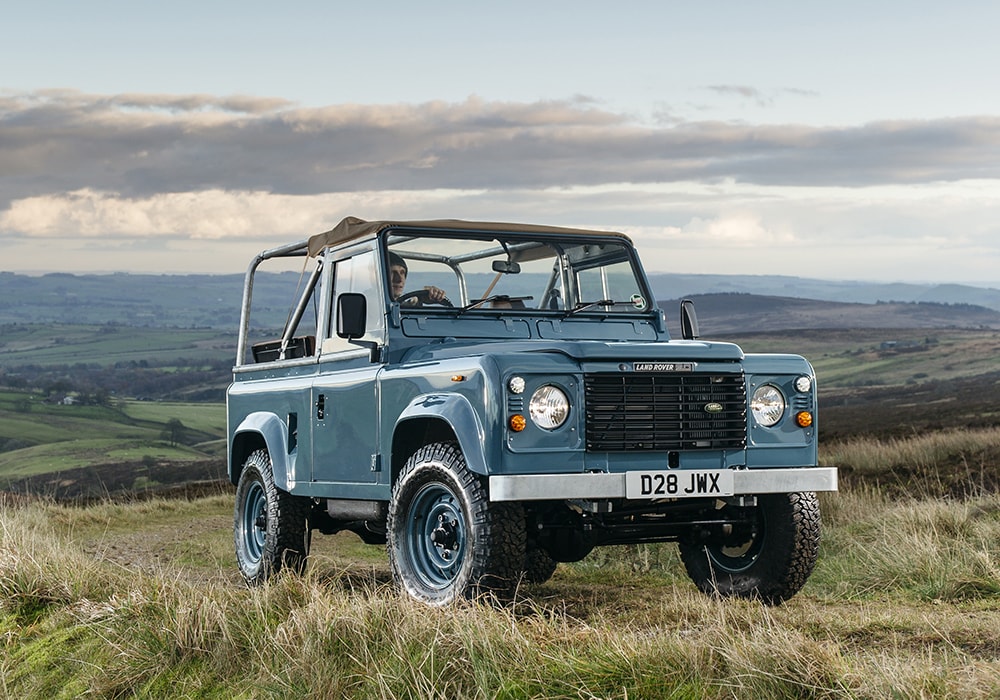 How a simple, OEM plus theme makes a cracking Defender : credit: © Alisdair Cusick

Lockdown needn’t have been all doom and gloom. Alisdair Cusick looks at a dream Ninety built during the Covid-19 restrictions of 2020

It is November 4, 2020, and there’s a strange mood hanging over all of England. Across the country, people are rushing about, hurriedly sorting all the jobs they need, to keep them and their loved ones contented at home for the next month. In London, the Prime Minister is, this very afternoon, seeking agreement from the Members of Parliament to pass another lockdown order, due to start at midnight tonight. After 12 noon, the country is under national restrictions once again.

Further north, unaffected by all this hustle and bustle, two people are high up, in the glorious open scenery of the Peak District moors, looking at a beautiful 1986 Ninety. Whilst the rest of the country is uniformly occupied with the imminent second lockdown, LRM is here to sneak in the latest cover shoot at the eleventh hour, neatly dovetailing the new restrictions. For whilst the rest of the country may be about to shut down, our cover star was built during the last lockdown. 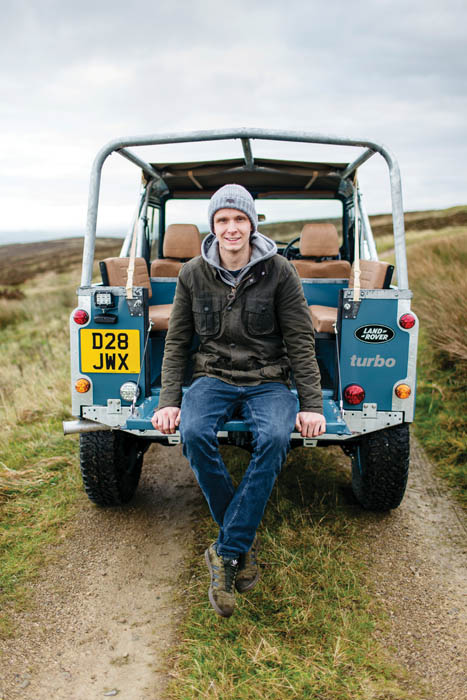 The plan was just to tart it up, and sell it on but Nick admits he's not very good at that

The man behind it is Nick Weatherby, from Staffordshire. A joiner in his family luxury coach conversion business, he already had one Ninety, an ex-military one. He didn’t particularly want another Land Rover, which is why when a phone call from a friend about a local Ninety for sale wasn’t on his radar, certainly not in a virus-induced national lockdown. Not interested, he declined, hung up, and carried on working. Mind casually wandering, he thought about it, realising he’d pass it on his way home. “I ended up nipping in, buying it – and giving the seller a job at the same time,” says Nick.

A relatively tidy car, the Trident Green Ninety already sported a recent 300Tdi and replacement bulkhead. The plan was just tart it up and sell it on. “I’m not very good at that,” admits Nick. “If I start something, I like doing it right.” He’d only driven it a couple of times, before one evening it went into his garage and the roof was removed. “I thought I’d start cleaning bits,” says Nick. Come the weekend, the car was down to a rolling chassis. The plan was just to get a half chassis, make a repair, and rebuild the car to sell. Previously owned by an engineer, the car had received some repairs in the past – a crossmember, many welding repairs –  but as Nick points out, with a bare chassis, you can see everything. 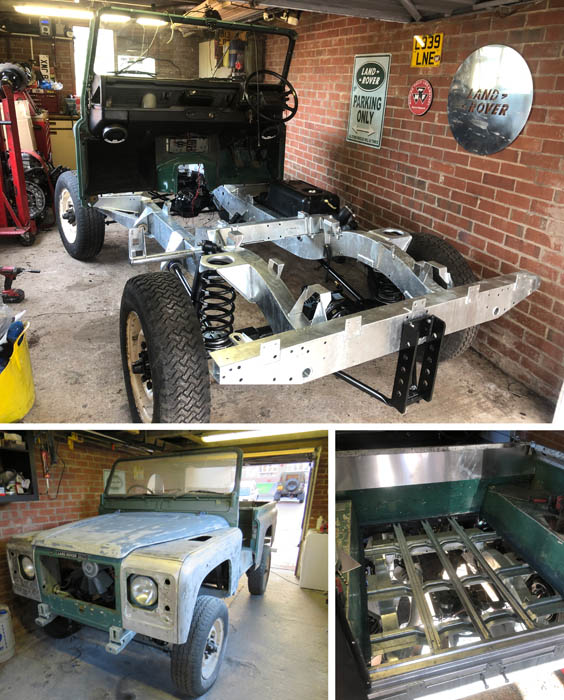 Roll on a few weeks, and Nick was at XD chassis, collecting a new galvanised frame for his car. “A couple of weekends later, and the car was sitting back on its rebuilt axles again,” says Nick. Not one to waste time, he’d stripped both axles, after having them blasted, welded in new diff pans on the rear and replaced a few brackets, before painting them in epoxy and rebuilding them. New AP calipers and EBC discs and pads up front, the rear axle was on original-spec drums with fabricated copper brake lines all round.

When it came to the health of the ex-Discovery 300Tdi, a brief drive confirmed everything he needed to know. “This is a good engine, it was so sweet I didn’t have to do a lot,” insists Nick. “I just can’t make it smoke, it is brilliant.” Knowing this, remedial work was merely crank seals and belts, plus normal service jobs and a repaint. “As far as I know, the Ninety is on its fourth engine,” he says. Coincidentally knowing the previous two owners, Nick knows the earlier owner stripped it on his drive, trying to put an early Transit engine in. The car ended up having a 200Tdi, which was how it was bought by Nick’s seller. “That ended up snapping the crank, and so this 300Tdi went in only about a year ago,” says Nick.

Running gear is a relatively straightforward task, cleaning back, changing seals or replacing and refinishing components. Above that is where the personal choices come in, and where Land Rovers begin to take on the flavour the owner chooses. In this case, Nick went for a factory inspired theme, with a few Series twists. “I made all my mistakes with my other Ninety: lifting it, big wheels – a terrible idea,” he admits. “We go to a Land Rover show now, and I get drawn to standard cars, so that’s the way I went: OEM where I could.” 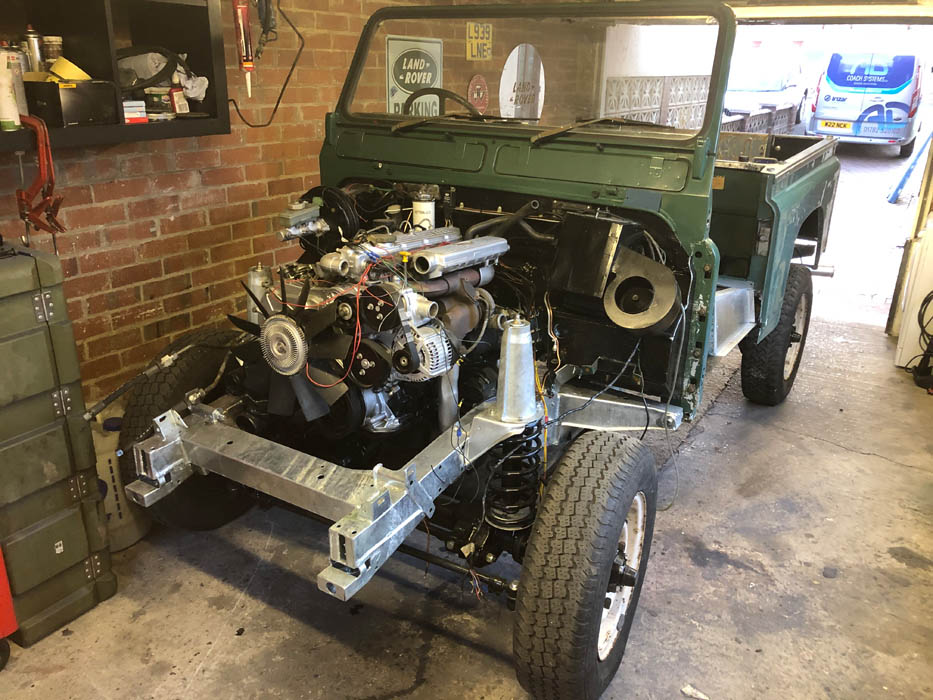 Going the new chassis route, Nick was forced to consolidate the drivetrain, for you can’t get a 300Tdi Defender chassis to fit an LT77 gearbox, off the peg. Knowing his 300Tdi was a good one, to keep things simple he decided to change his gearbox to an R380/LT230 setup. This meant the drivetrain bolted straight in, but the under-bonnet area and gearbox tunnel would need tweaking, as the R380 sat further forwards than the current LT77. Choosing a used R380 from a Discovery, Nick fitted new seals and an Ashcroft Defender stick kit, found replacement body parts from a Td5, then fabricated a surround panel for the bulkhead.

If behind every great Land Rover engine is a great gearbox, then above that sits a great bulkhead. What did Nick do there? The one saving grace with the build was the bulkhead was a recently repaired Land Rover item. “It was a godsend, to be honest,” reveals Nick, for both time and budget. It was lined with Skinz sound deadening on the engine side of the bulkhead, painted, and bolted on. The visible interior panels were left bare, looking similar to a Series. 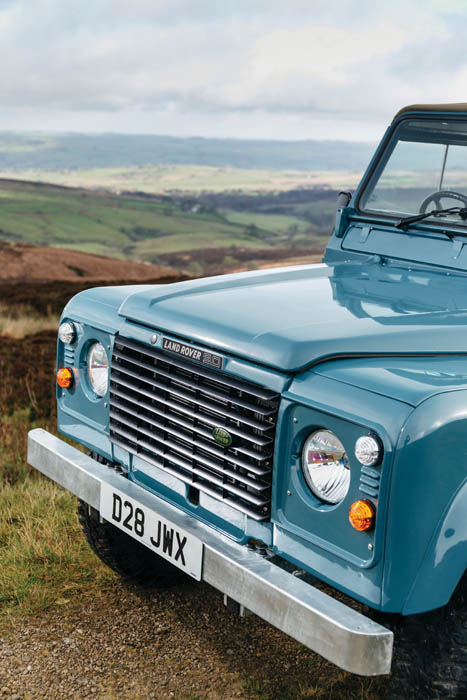 Bodywork, Nick acknowledges, was rough. Having had chequer plate wing tops, the fronts were peppered with holes, which Nick patiently filled with low-temperature alloy welding rods. The rear tub needed a new floor, crossmember replacements and lots of dents knocking out. Early Ninety doors in solid condition are rare beasts, so the car got new ones from SP Landrover, with correct lift-up handles but split windows to suit the canvas top and give a Series-style look. Like the bulkhead, doors had soundproofing added.

After doing all of the repairs, panel beating, and rubbing down ready for spraying in epoxy primer, it was flattened back. “I spent weeks on the bodywork,” he says. Paint is all about preparation work, but for the final finish, a body painter friend at Paint Palace did the job, in 2K paint. “I couldn’t have baked it,” says Nick. Unsure about the of-the-era Trident Green colour but wanting to keep it original, Nick was eventually drawn to another factory-standard Ninety colour: Marine Blue. Fortunately he loves it! 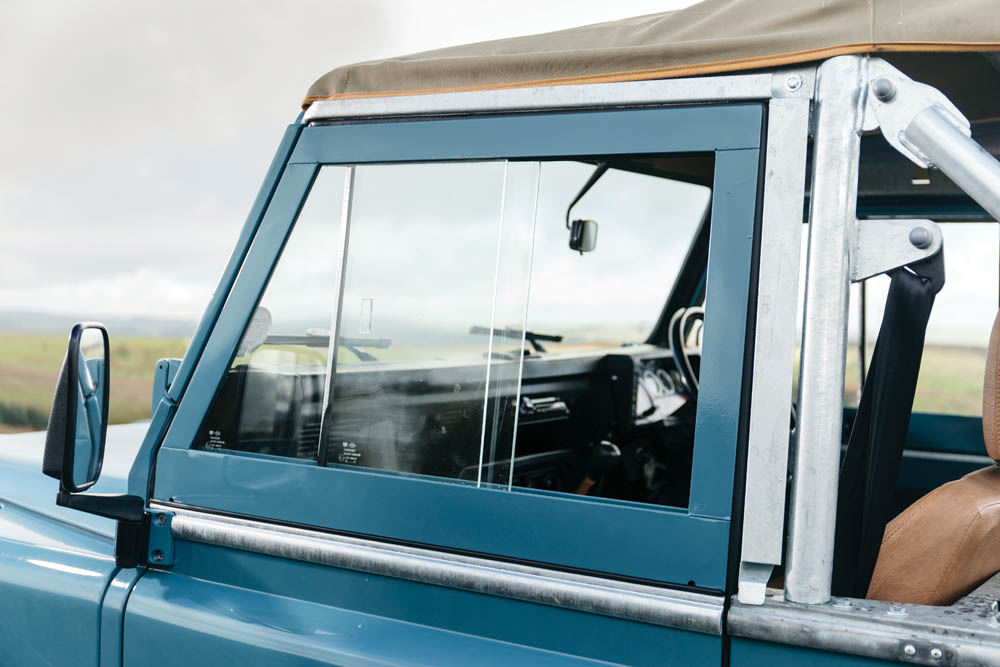 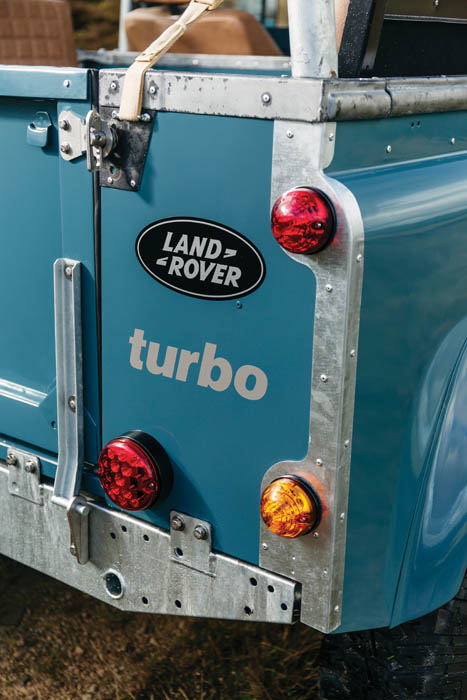 Body cappings were stripped of paint, and left in their patinated galvanised finish, which Nick thinks is more authentic. What may appear to be a roll cage is in fact a beefed-up set of hood sticks. “I like hood sticks on a Series, but I think they look too skinny on a Defender,” says Nick, who commissioned heavy-duty sticks with extra side braces by Whitbread 4x4. He admits the bikini hood, from all Wheel Trim doesn’t really work now – a bikini top should angle down after the cab, whereas Nick’s hoops mean the canvas flows horizontally rearwards, creasing a little in the process. 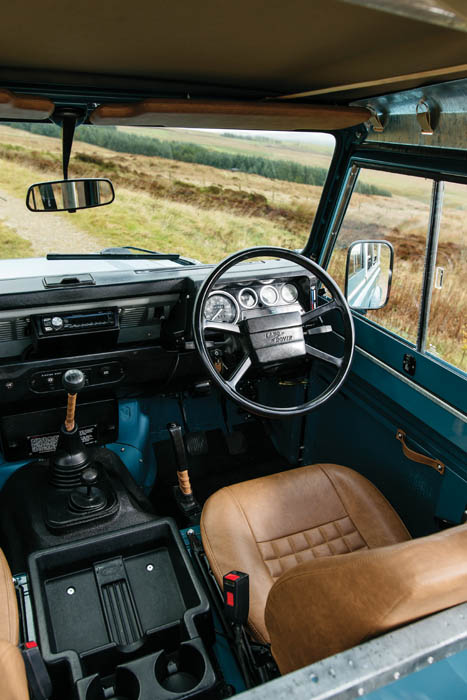 Bare bulkhead and doors give a Series look, but hide extra soundproofing

Interior work ran to replacing the existing front seats with some ex-military items, retrimmed along with rear seats in a tan vinyl by a trimmer connection through his coachwork. The same vinyl was then tastefully used for a few highlights like grab handles, sun visors and gearbox trim. 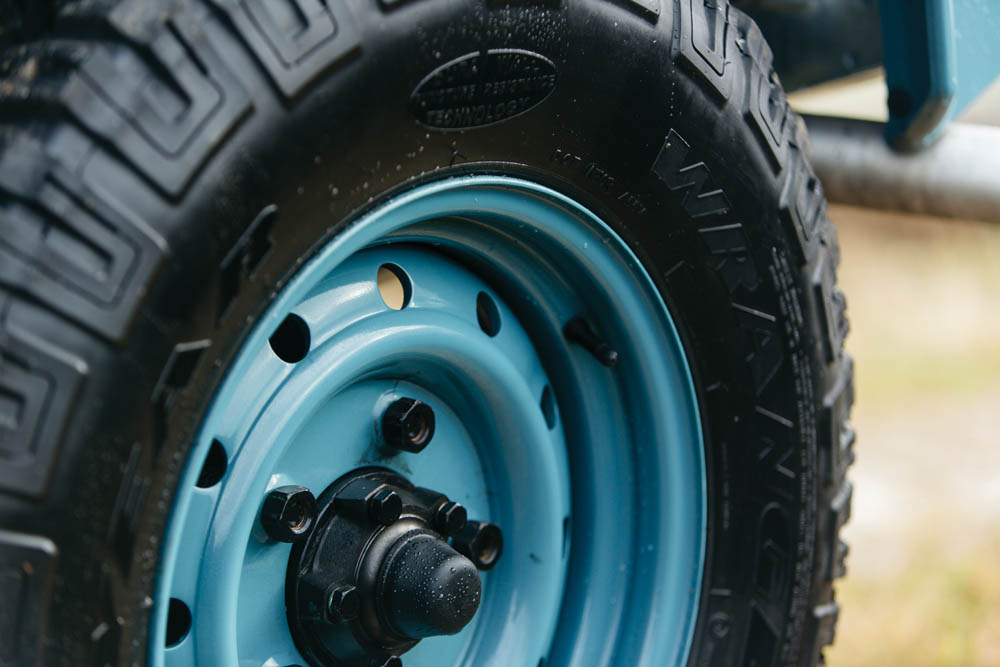 Marine Blue Wolf rims were shod in 235/85 16 Goodyear MTRs. “With those tall, skinny tyres, from the back end it looks like a real Land Rover,” he says. 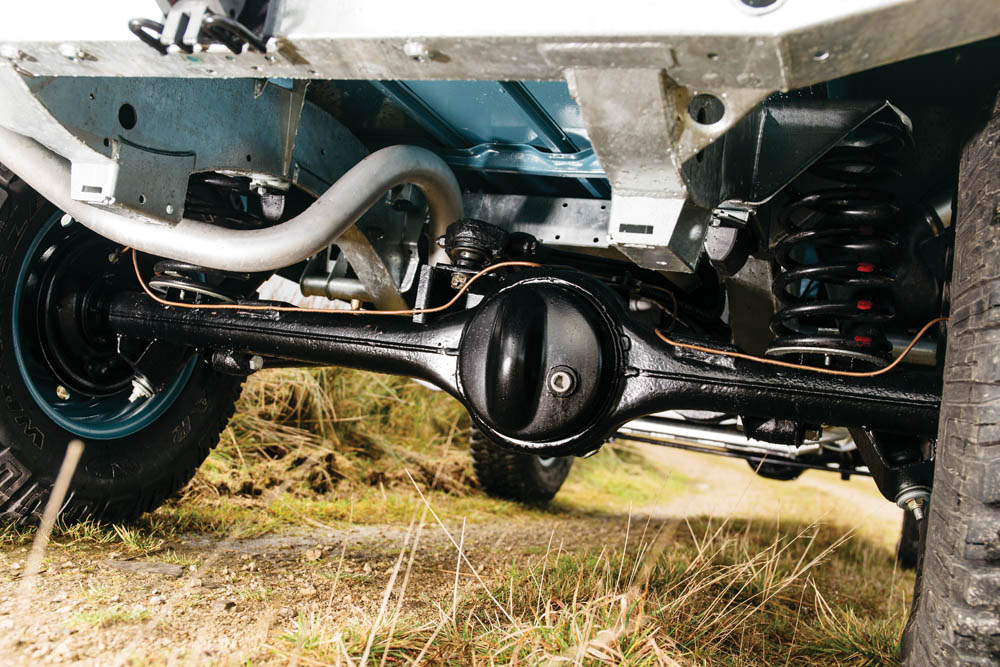 Underneath workmanship is as clean as the bodywork 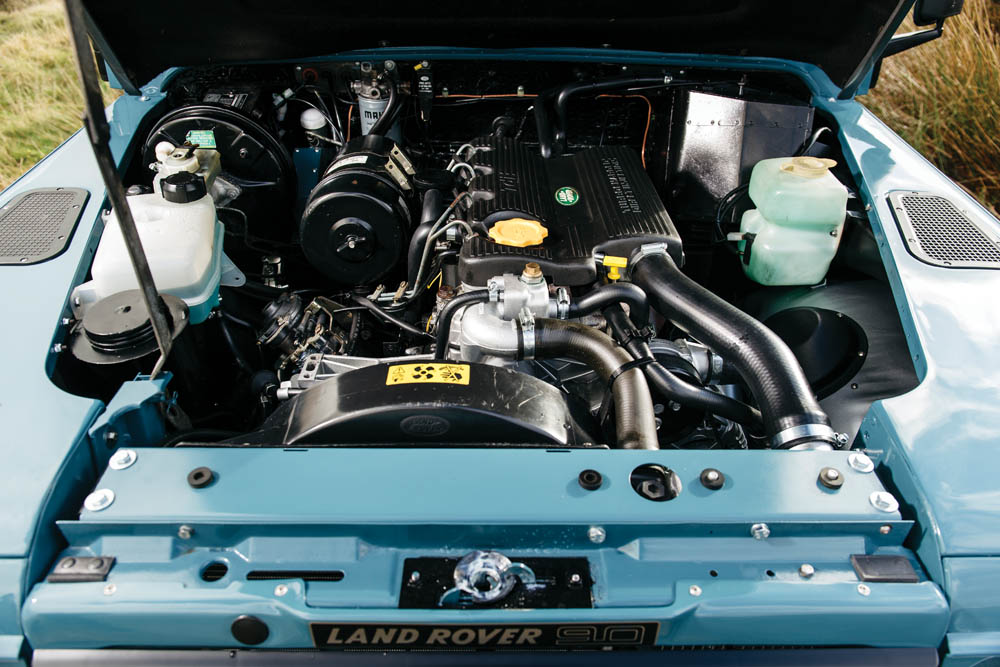 Working evenings after work and most weekends, Nick reckons it took about four months, all in, to finish. That this was done during a time of lockdown, with business supply chains stretched – in some cases, collapsing – is no mean feat. Most parts were ordered from LRparts, who Nick says were brilliant, getting everything he ordered, as he needed.

The question is, what did he make of it when done? His only problem was a faulty clutch master cylinder, sorted by simply ordering another. “It drives nothing like any land Rover I’ve driven before,” he enthuses. “It’s tight, goes in a straight line and stops in a straight line. I learnt from my mistakes previously. Keeping things standard is the best way – they did things for a reason,” says Nick. That said, exclusions can be made in the interest of improvement as proven. And to that end, Terrafirma bushes and a 300Tdi clutch pedal and L.O.F pedal spring, which he rates highly in traffic, were also added to the list of modifications.

Though it was intended to be a project merely as something to do at home and punt on, he’s now decided to keep it. “I would like to do it again, but I think I’d end up with the same car, as I’ve done it how I want it,” he says. On the bleak, open moorland, the Ninety cuts a sharp figure. Neatly balancing factory appearance, look close you can see touches of NAS 90 and Series, but from afar, it just looks right. More so as we tootle around a suitable track for photography. 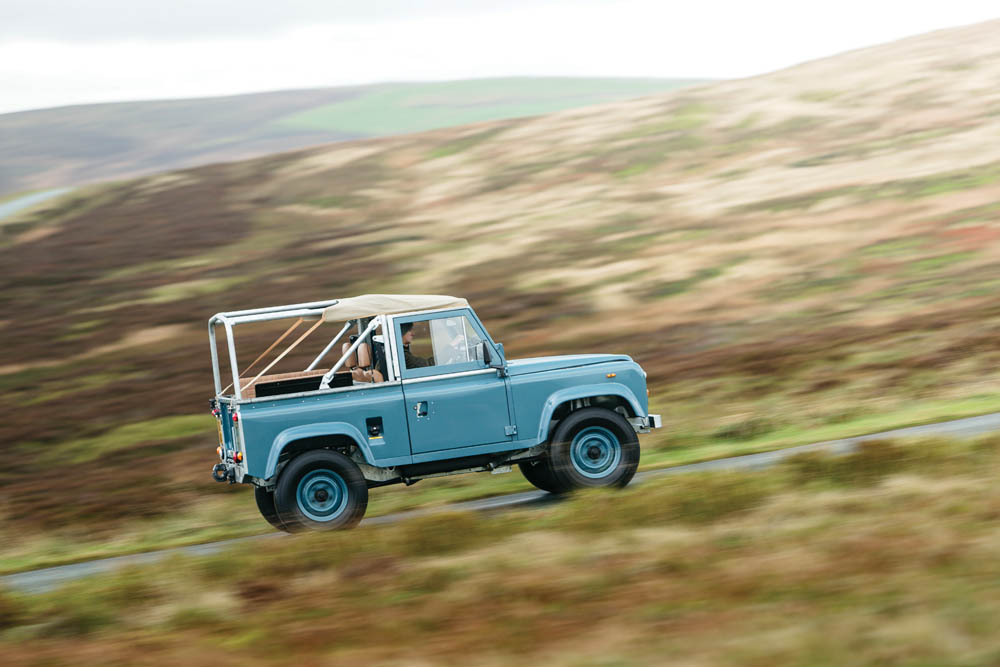 After years of higher, faster, louder, perhaps the takeaway here is that in 2020, if you want to make a car grab attention, make it look standard. Nick’s build shows how a simple, OEM plus theme, well executed, makes a cracking Ninety. He built this when, under law, we were told to stay in.

If there’s more of that to come, maybe there are some positives to lockdown?

Click on our Classics section to see our pick of the best restorations, plus much more...