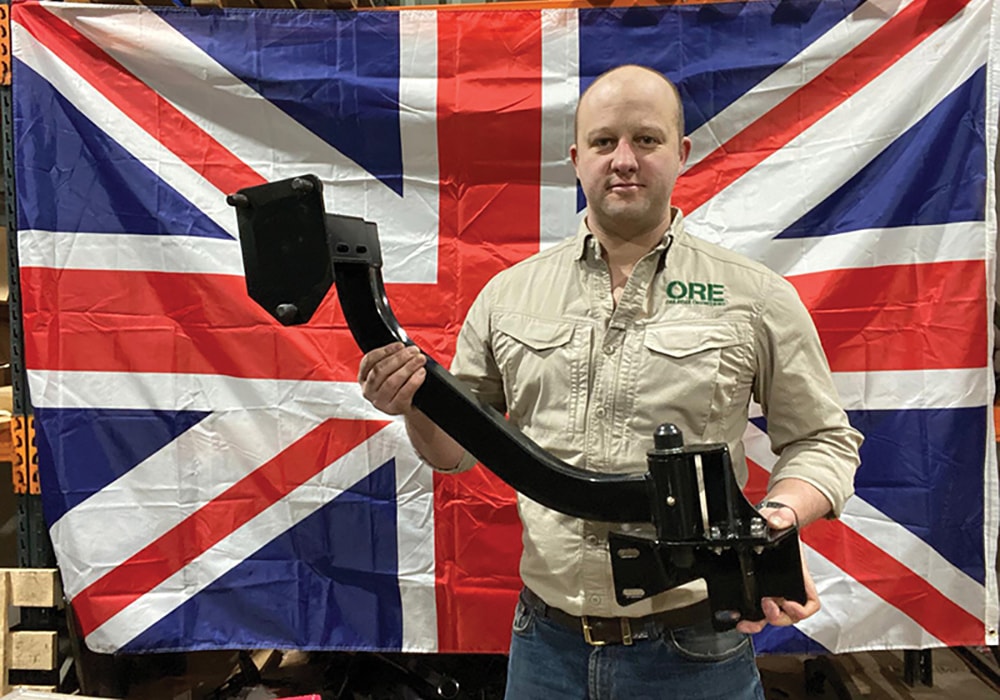 Chris McCormack, co-founder of ORE4x4, is making it his mission to raise awareness and generate support for small British manufacturing businesses with the ultimate aim to set up a consortium focused solely on the Land Rover market.

It all began when ORE was contacted by a fellow enthusiast, Nathan, on Instagram regarding what seemed to be an overseas competitor trying to replicate their wheel carrier. Further investigation confirmed that the individual posting the photos of a very similar design was associated with a known retailer and the post was later removed.

Chris was so astounded that someone had bothered to contact ORE to highlight this particular post that he later called him to say thank you and sent him one of their wheel carriers as a token of his gratitude. It turned out Nathan had been following the development of ORE’s product since their very first prototype post back in December 2017, and he said that it was sad to see the time and effort gone into developing such a unique, proven and popular product only to have someone else try to copy it.

Unfortunately the issue of counterfeit parts is hardly breaking news – it is a serious and widespread problem in the aftermarket sector, which is why ORE is introducing a reward scheme, whereby they will give away one of their products to anyone that highlights similar instances where so-called copycats appear to be imitating their unique design. Further details of how it will work will be posted on their social media channels, so be sure to follow @ore4x4uk.

In addition, Chris and the team aim to set up a British Manufacturers Consortium. Its purpose is to identify and promote all the British manufacturers within the aftermarket Land Rover industry and also spread awareness for how much time, effort and passion that these companies put into their products. Chris’s hope is to get as many firms on board as possible so fellow enthusiasts can see all of their unique approved products in one place. Manufacturers will have to demonstrate certain criteria to be approved and Chris wants the group to be run by committee so it’s fair and cannot be perceived to benefit or be associated with any one particular brand.

In this exclusive interview with Chris we get to the bottom of his passion for championing British manufacturing in the aftermarket Land Rover sector.

Have you run your idea past any companies to gauge their reaction yet?
Obviously the idea of the consortium is still in its infancy but from the companies I have spoken to, they’ve all thought it is a fantastic proposal and they’re really interested. Uproar 4x4, GRP4X4 and Design & Development Engineering Ltd have signed up. Like us, they know how much time and money is spent bringing a product to market after various iterations of prototypes and the level of quality but also customer of care and support afterwards. They’ve all seen an increase in counterfeited products over the years and are keen to try and help stamp it out together.

How easy is it to get legal protection for your business and/or products such as provisional patents on ideas and registered trademarks?

It’s not for small businesses in that it’s hugely expensive and time-consuming, and even then there are ways around a design patent and some people will expose those loopholes, while others will violate it and challenge you to enter into an expensive lawsuit. Obviously a totally unique idea that can’t be easily replicated is what you need to do but when you are creating aftermarket solutions to a product that already exists, but ultimately doesn’t serve the purpose of a customer’s particular needs, that’s very different. It can be easily copied but made ‘different’ by it being a few millimetres bigger or smaller.

A lot of customers, of course, won’t know that you’ve spent 18 months developing a product – like our wheel carrier for example. However, for smaller parts that don’t require as much time and effort – such as door hinges say, there’s nothing to stop them buying one, and taking it to a machine shop in China or even Europe to reproduce them in big batches at a lower price and then sell them on – either as their own or your product as a third party seller. While I’d love to challenge them all, as a small business owner the last thing I need is a lawsuit which requires thousands of pounds and a legal team.

How else can you protect yourself from handling copycats?
Use a non-disclosure agreement (NDA) when you discuss details of your product with employees and also set something up like our reward scheme to help build brand awareness and thus gain exposure for your products. Getting fellow enthusiasts to call out copycats on social media and then reward them with your products is an effective deterrent. I also recommend having legal insurance as they’ll be able to advise and guide you in how to deal with companies that do try and imitate your products.

In your opinion how far does offering superior service and building brand loyalty prevent customers from jumping ship when they see a cheaper alternative?
From our end, once a customer has had what we call ‘an ORE experience’ – that is they’ve seen the product and the effort that goes into it, they remain loyal. So for example, we’ve got some customers that know we’re developing rock sliders and would rather wait and buy from us than go to someone else. We’re becoming renowned for our quality and service, but we can’t ever stop people from going elsewhere and taking a punt on a much cheaper product if for example we’re out of stock, but they may well have regrets when it falls apart and they can’t get past a call centre.

We’ve spent many hours jumping through hoops to get our Made in Britain (MIB) approved accreditation, it’s something we are extremely proud of.

To that end, why should people avoid counterfeit or cheaper parts from other suppliers?

You can obviously cite reasons such as the parts under-performing, wearing out prematurely, or worse still outright failing and it then becoming a financial and safety issue for the consumer, and that’s where we have the upper hand. We carry public liability insurance – so, if God forbid, our wheel carrier falls off and goes through the windscreen of a car behind it, we’re covered. Of course, we’re confident it won’t because of the engineering that goes into our products but also because we go the extra mile, like we worked with local universities in terms of structural analysis, as we did for our unique coating system – copycats certainly won’t have done that that.

Another obvious reason is to support British manufacturing and small companies that ultimately love what they do and develop great products – at eye-watering development costs and thousands of man hours – for fellow enthusiasts.

We are very passionate about what we do and that’s why we like to give other Land Rover fanatics sneak previews of the processes we go through. The automotive aftermarket is a vital part of the UK economy, and we must do everything we can to protect it, as well as providing Land Rover owners with choices over how they personalise their vehicles.