Defenders to drool over at Nene Overland : credit: © Dave Phillips

These days there are theme parks for seemingly everything, yet nobody (so far) has come up with Land Rover Land for fans of the green oval. But if you’re looking for the place where you can find all things Defender, we can thoroughly recommend a day spent at specialists Nene Overland.

Nene Overland’s HQ, just off the A1 near Peterborough, is a one-stop shop for owners who want to explore the possibilities of Defenders. Whether you’re looking to buy one or want to consider the options for your own, here you’ll meet the experts to make your dreams come true.

Maybe you fancy a mighty V8 engine conversion for your existing Land Rover, or transformation into a winch-equipped off-road beast – or perhaps a home-from-home camping set-up for overland expeditions – Nene Overland is the place to come.

No wonder some folk are calling it Destination Defender.

Nene Overland currently has a great selection of Defenders on site, waiting for new homes. But this isn’t just a Land Rover garage; you can also talk to experts who can expand the potential of your own vehicle. In fact customers from all over the world converge on this Cambridgeshire mecca for all things Land Rover.

Nene Overland is open for drop-in visitors six days a week (8.30 am to 5.00 pm weekdays; 9.00 am to 1.00 pm Saturdays; Sundays by appointment only) but a phone call in advance is recommended so that you get to meet the right experts to discuss your requirements.

1. Defenders for sale
There are usually around 60 Defenders for sale at Nene Overland, ranging from standard farmers’ diesel trucks to classy and powerful RIVOLVE creations, most with their trademark muscular big V8 petrol engines under the bonnet.

We all know that Defenders are the most versatile vehicles on the planet and Nene Overland are the specialists who can turn your dreams into your ultimate bespoke wagon. And the best thing is that these dream machines are created here, on site.

Check out the latest list of vehicles for sale (including photographs and full technical spec) online at neneoverland.co.uk/vehicle-sales. 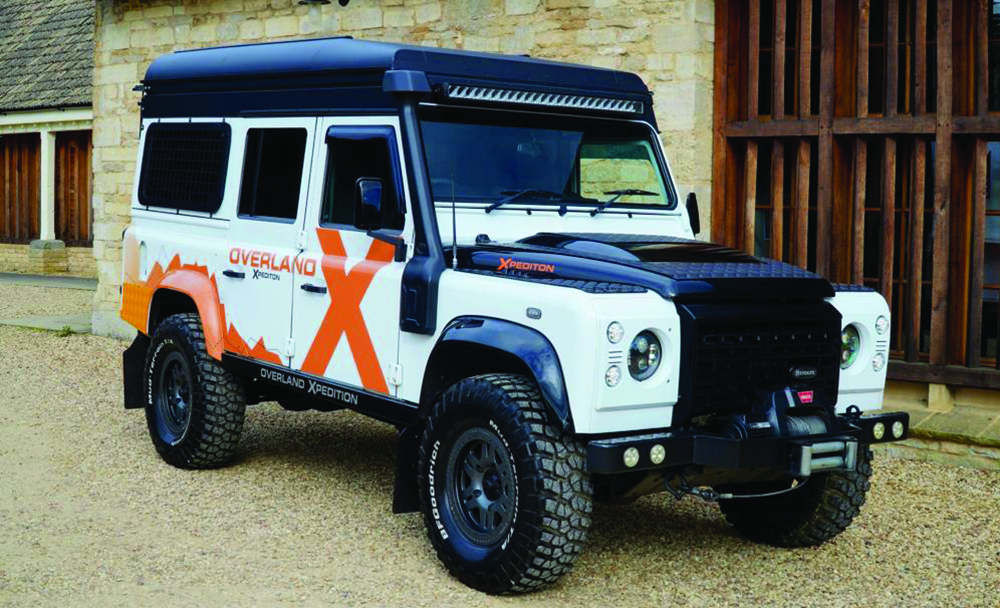 Maybe you’re an off-road fan who wants to make your Defender more capable in the rough; or you have your heart set on a vehicle-dependent overland trip where your Defender will become your home. Either way, this is the place to come to turn those dreams into reality.

Would-be expedition leaders are particularly well catered for, with a range of rooftop and pop-up tent options, as well as custom-built off-road trailers. Better still, they have the craftsmen to transform your Defender into a home-from-home, complete with all the ingenious mod cons that make living on the road a real pleasure. Nene Overland is a primary dealer for Frontrunner.

Thanks to Nene Overland owner Andrew Harrison-Smith’s extensive experience in the off-road scene, the company has also perfected bespoke suspension systems for whatever terrain you’re likely to experience when you set off on your adventures. There’s no reason why your Defender shouldn’t be your home on wheels for thousands of miles across continents as well as very capable indeed, off-road.

If the Nene Overland team was ever to appear on Mastermind, the specialised subject would be pumping up the power on Defenders with big V8 engines. Or, rather, how to get those engines and gearboxes to “talk” to the rest of the vehicles’ computerised management systems in this increasingly electronics-reliant era. It’s a complicated job that Nene boss Andrew freely admits took years to perfect.

A common conversion is the ex-Corvette 5.3-litre V8, which Nene’s technicians have paired up to work nicely with a standard Puma gearbox. But they’re not resting on their laurels: they have now paired up the even more powerful 6.2-litre GM V8 to an eight-speed automatic gearbox which somehow fits into the Defender engine bay.

And that’s not all. “We are now offering a supercharged version, too,” says Andrew.

To make the most of that power, each vehicle is fitted with a bespoke big-bore exhaust system, created on site. It does the job, sounds good and looks good, too, in stainless steel. 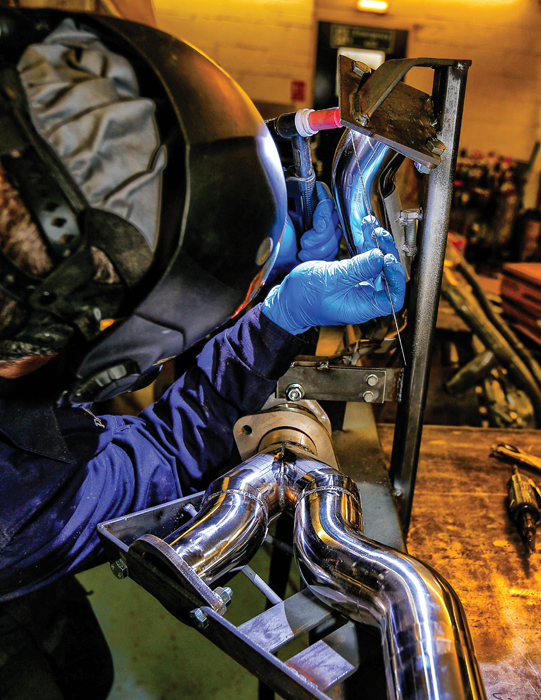 The sort of folk prepared to shell out big bucks on an American V8 lump aren’t going to skimp on the rest of the vehicle, which is where the RIVOLVE brand comes into play. It’s Nene’s name for high-end bespoke build and, in case you’re wondering, boss Andrew chose it as a brand name partly because it is becoming increasingly difficult to come up with a name that doesn’t result in indignant letters from JLR’s solicitors but mainly because it hinted at the evolution and revolution of creative input that sets RIVOLVE aside from its competitors.

What is certain is that Nene Overland’s RIVOLVE creations certainly stand out from the crowd.

As an aside, a very high proportion of RIVOLVE customers opt for soft tops on their Defenders. “We took loads of orders for soft tops during the Covid lockdown,” reveals Andrew. “We’ve got ten on the go at the moment.” 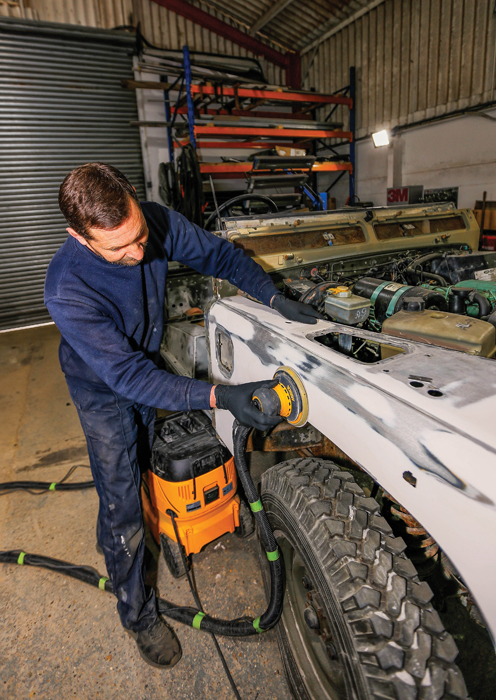 Nene Overland’s bodyshop business used to be based a few miles away, but today it has been brought on-site and offers full or part-refurbishment, repair and re-finishing to any aspect of your Land Rover’s body or chassis.

Says Andrew: “Our traditional craftsmen have over 40 years experience, supported by painters and traditional panel beaters. Metal fabricators are experienced in aluminium, mild and stainless steel, and can even make one-off parts if required for your vehicle.

“We regularly work with all manner of wood products and our on-site vehicle trimmers can deliver just about any combination of works to give you a high quality, durable and long lasting quality,
look and feel.” 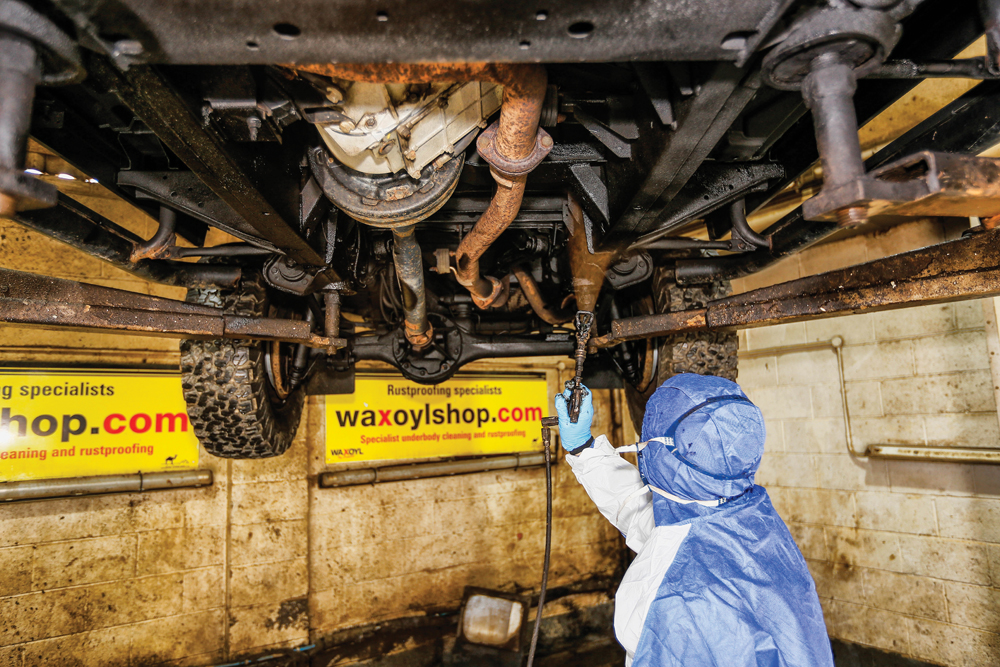 Waxing lyrical: where Defenders get the ultimate protection

Land Rover enthusiasts know only too well that their favourite vehicles are prone to corrosion – sometimes spectacularly. Nene Overland has been fighting rust since 1988 and these days has its own department for applying Waxoyl rust prevention treatments to any vehicle that might be susceptible to corrosion.

They recommend treating the underside of your vehicle at least every five years –more often if you live near the coast or drive in winter on roads treated with salt. In fact, annual inspections are recommended, just in case.

A Waxoyl treatment starts with a visual inspection and steam cleaning, where areas of corrosion can be located and repaired before application of the rustproofing –
all with the vehicle jacked high off the ground so the operator has full access to every nook and cranny of
the underside.

7. Service and repairs
Although Nene Overland is synonymous with all things Defender, all Land Rover models are catered for in the company’s large and well-equipped workshop, whether for routine servicing or repairs.

There are also a growing number of customers who come to Nene Overland for restoration work, often on older Series vehicles as well as early Defenders that are beginning to look tired. An advantage of coming here is that all the restoration skills, including the advanced bodyshop, are on site.

Plus, there are owners who like the RIVOLVE concept and want their own standard Defenders upgraded to the exciting new spec. “We have a growing number of clients who want something bespoke, built just for them, often involving chassis-up rebuilds and V8 engine conversions,” says Andrew. “There are a few companies that will tart up your own Land Rover so that it looks good, but haven’t got the engineering ability that we have here on site. We advise you what’s best for you and your Land Rover.”

It all started with a Subaru pick-up

The man behind Destination Defender is Andrew Harrison-Smith, who started Nene Overland in 1988 – thanks to a Subaru pick-up truck. 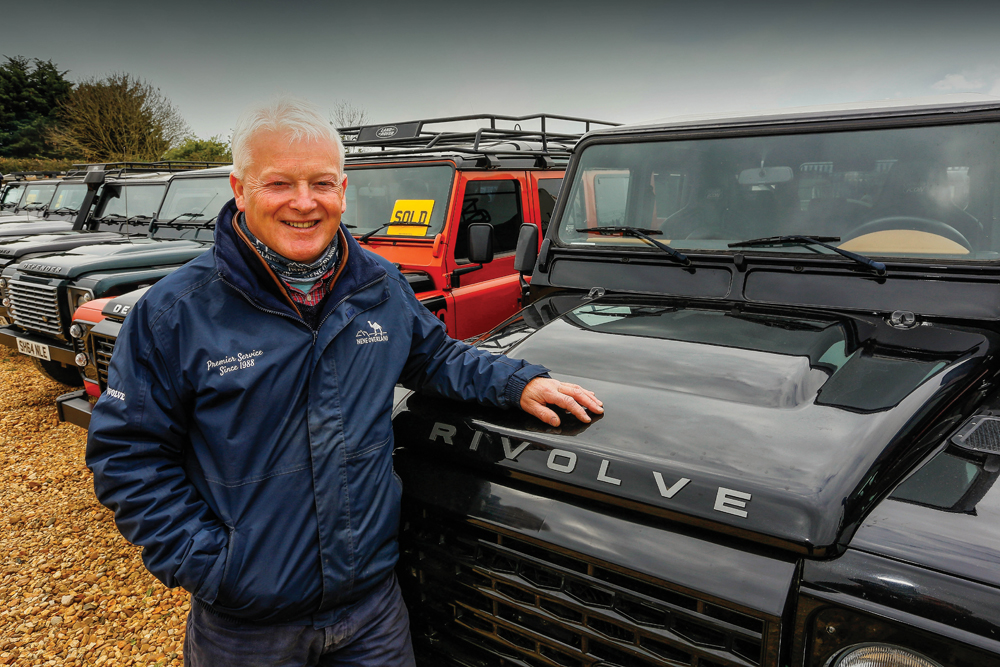 “I was running a 600 acre farm and realised I needed to diversify,” he explains. “I invested in a Subaru pick-up, tidied it up and drove it for a while before selling it to another farmer, for a profit. I then bought a Series IIA 109 truck cab advertised in Auto Trader for £800, got it running well, used it for the summer and sold it in the winter for £1800. So I bought another Land Rover... And that’s how it all began. The original business was called Nene Leisure 4x4, because the River Nene runs through the farm, but I love travelling so I changed it to Nene Overland.

“Through the mid-1990s the business grew and I realised I needed to give it more attention. A farmer friend who wanted to expand his acreage took over the running of the farm, which freed me up to concentrate on Nene Overland and I went from five or six Land Rovers in the yard to 20 or more and I saw very early on that there was a niche market for early Defenders and older Series Land Rovers.

“I’m from a  farming background, so I’ve known Land Rovers all my life and I have always been passionate about them. In the late 1990s I got heavily involved in off-roading and the winch challenge events that were so popular at that time.

“I’m personally less involved with the off-road scene these days, because it has become very elitist. To compete in the international challenge events you need a very tricked-up vehicle – £100,000 or more and that’s before you even think of shipping it abroad to where the events are taking place.

“These days, off-roading is divided into the top end and the bottom end, where enthusiasts drive old Discoverys around quarries. There doesn’t seem to be any middle ground any more, which is a shame. I’d like to see it come full circle.”

Nene Overland were also at the forefront of the LPG conversions so popular with V8 owners at that time and, in the early 2000s, Andrew expanded Nene’s workshop operation and, a decade later, took on the franchise for Hannibal rooftents and got involved with overland conversions as well as bodyshop work. 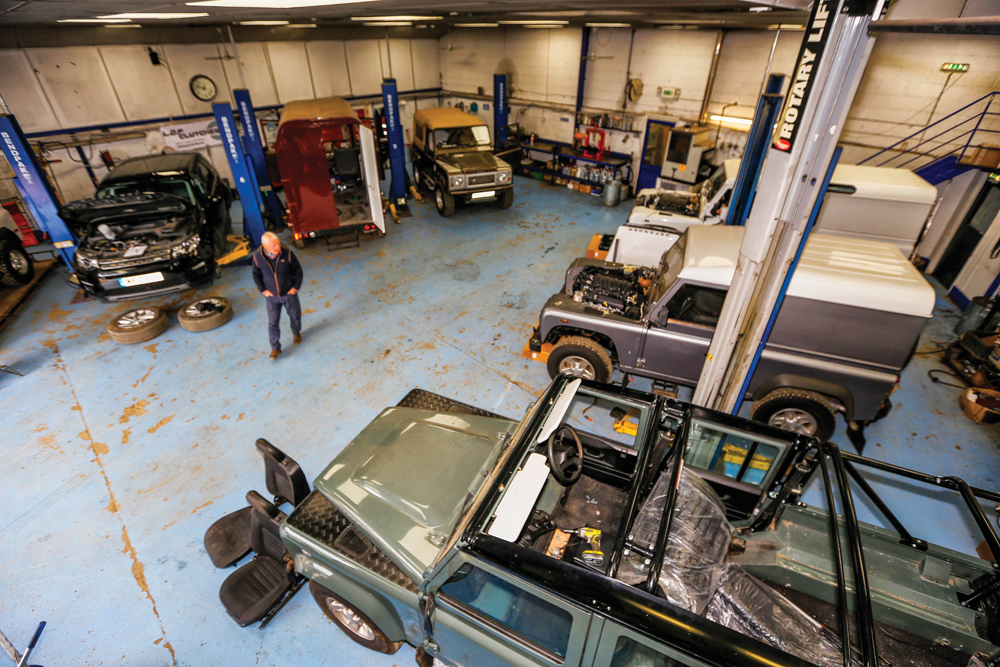 Andrew was also quick to recognise the growing enthusiasm for original Defenders, establishing Nene Overland as a key player in the bespoke conversion of the iconic models, including the fitment of big V8 petrol engines and auto gearboxes for clients who wanted the ultimate Defenders.

Many thought the popularity of old-style Defenders was just a passing fad that would fizzle out once new Defender came into production, but the opposite has been the case and Nene Overland’s order books are full for the ever-popular RIVOLVE models with their big Chevy engines – and tons of attitude.

Andrew says a large part of the success of Nene Overland has been his insistence on recruiting expert staff, who could relate to customers and their love of Land Rovers. Today he employs 23, headed up by service manager, David Jenden, and parts specialist, Bob Webb, but the team, also includes experienced welders, technicians, sprayers and spannermen who know Land Rover models inside-out.

“Yes, we are constantly working on £100,000-plus RIVOLVE projects for wealthy enthusiasts, but we never forget the ordinary enthusiasts and owners who just want a patch welded on their chassis, and their vehicles expertly serviced at sensible prices.”

Nene Overland is based at Manor Farm, AIlsworth, on
the outskirts of Peterborough, Cambridgeshire PE5 7DL,
and just off the A1 and A47 trunk roads.

Peterborough station is on the East Coast main line, with regular services from London and the North, as well as the Midlands and East Anglia.