The enforced lockdowns of the Covid-19 pandemic have seen an upsurge in Land Rover projects, with some retailers selling out of parts as the Landy community got spannering. The Turnbull family in south-west London was no exception, with the first lockdown giving them the incentive to finish off a Series IIA restoration that they’d started in 2014.

It had been the brainchild of dad Harry, who reckoned it would be a great way for his son March, then aged 11, to rebuild his own Land Rover in time for his 17th birthday in March 2021. But the 1968 SIIA – bought unseen on eBay – was in a worse state than they expected and, with March away at boarding school, it looked as though the project might not be finished in time.

But fate intervened in early 2020 when the first lockdown was announced and March returned home. He was really supposed to be studying from home, but that half-finished Land Rover in the back garden was just too much of
a temptation. Mum Katie and sisters Skye (18), Libbie (14) and Tess (12) also helped out, as Harry and March explain . . . 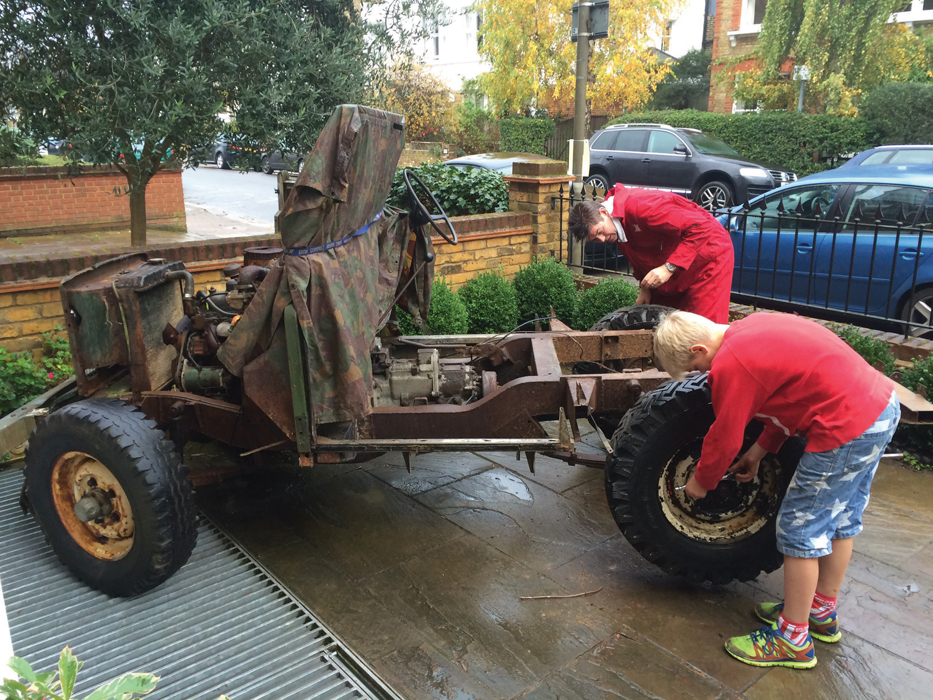 March was just 11 when he started out on the project

How did you get first involved with Land Rovers?

Harry: I grew up on a farm where old cars, bikes and tractors were the norm. My first Land Rover was a Series III 109 with a capstan winch and a generator under the passenger seat. Others followed, including a 300Tdi 110. After that came a 2001 Td5 110 County Station Wagon –a great car, easy on long journeys with six bikes, a roof box and everything else the family insisted on bringing.

March: I have always enjoyed anything mechanical. I started like many people with Lego, then Technical Lego. Dad has always done DIY, so we were always having eBay searches and buying old lawn mowers, a petrol go-kart, scooters - the aim was to buy, mend and sell but it never seemed to work like that… 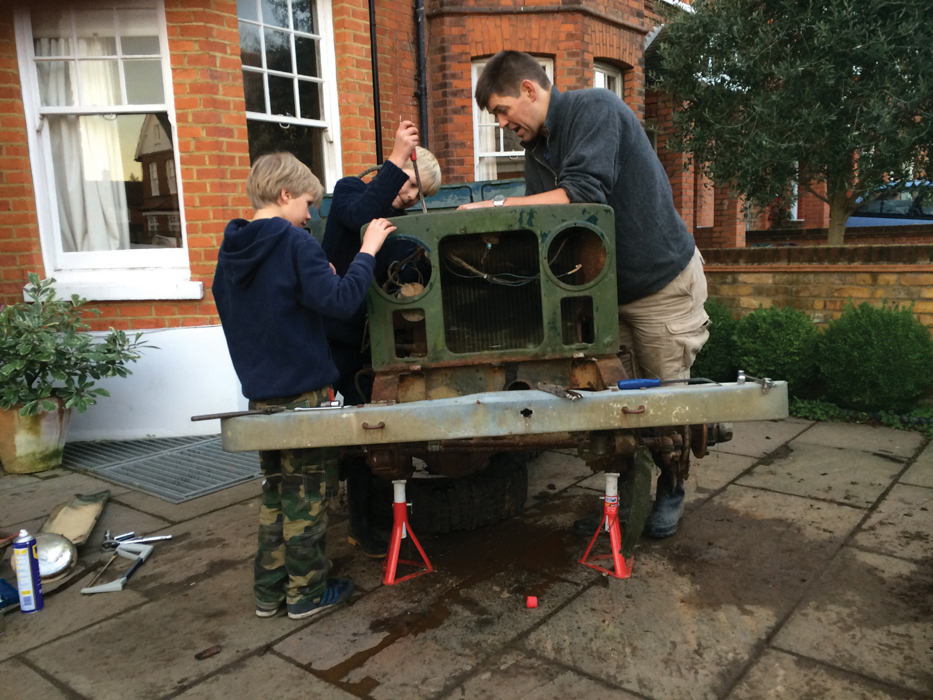 Father and sons hard at it

Tell us about your project vehicle…

Harry: The whole family loved our 110, so I wanted something that was fun and interesting for a project that we would all enjoy. A 1968 SWB Series IIA was perfect. I bought it on eBay for £691 plus £100 for delivery from Christchurch. The owner promised me he'd had it driving “recently”.

It was delivered on a cold November afternoon with three flat tyres and weeds growing out of it. We had to tow it off the trailer with the 110 and shunt it onto the drive, bumper to bumper. I can only assume that “recently” was at least 20 years previously!

March: I didn’t know what to think as this green mossy thing was dragged off the trailer. Very soon though I realised that taking it apart was fun: we quickly seemed to be making a difference – it was getting smaller!

But after finishing the chassis, everything started to go very slowly. Dad was busy with work, and everything was cleaning, rubbing down and I got bored with nothing going back together. It was a bit of a low point.

Sorting the axles, painting them, and buying the new springs was a big moment and everything started to move again, and it felt like we had something real.

The bushes were a real problem: we couldn’t get the new ones in, but eventually I found a video of a guy using the thread from a scissor jack with a plate welded on the end – so easy with the right tool.

I liked welding, but found the chassis difficult when welding thick metal to thinner metal, so I was really avoiding the bulkhead, which was rotten. Eventually, I just went for it. We had bought repair panels from YRM and that really helped. The golden rule is: measure twice, cut once! 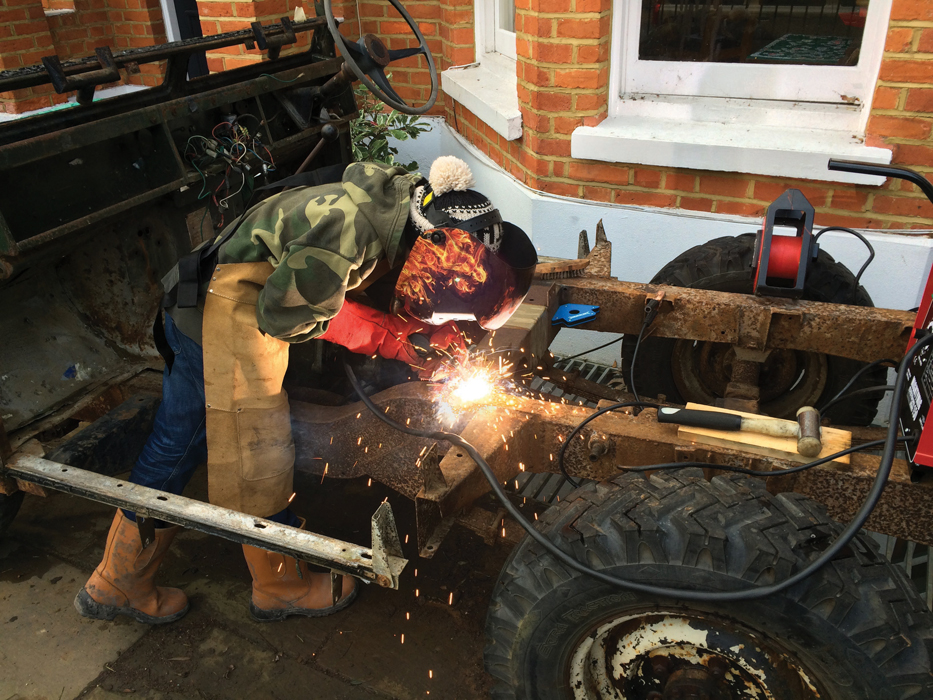 Did its poor state make you more determined?

Harry: The chassis and bulkhead should never have been saved. However, that was part of the learning process. We were there to learn to Mig-weld and understand how the car was built. March lost his mojo for a while but we had plenty of time – we started when he was 11 and planned to finish by his 17th birthday.

March: Once the bulkhead was done, I thought I could see the finish line. It only took me two days to take it apart when I was 11, so how hard could it be to put it back together? What I didn’t realise were the hundreds of bits that had corroded away: door seals, brake lines, wiring harnesses . . . plus the difficulty of aligning doors and locks and hinges.

I didn’t trust Dad on painting, but he was OK when it came to rubbing down and preparation. We did everything under a tent in the garden, which I don’t think helped as hot/cold/wet/dry and bits of trees and bugs adversely affected the paint finish.

I did originally want bright orange (and still do) but was persuaded by Mum and my sisters that something more muted might be good. We spend quite a lot on paint (epoxy primer, filler primer, coach enamel) and used a lot more than we expected, but that may be because we were spraying it too thick. But we got there and I think it looks brilliant – Keswick Green and Atlantic Green. 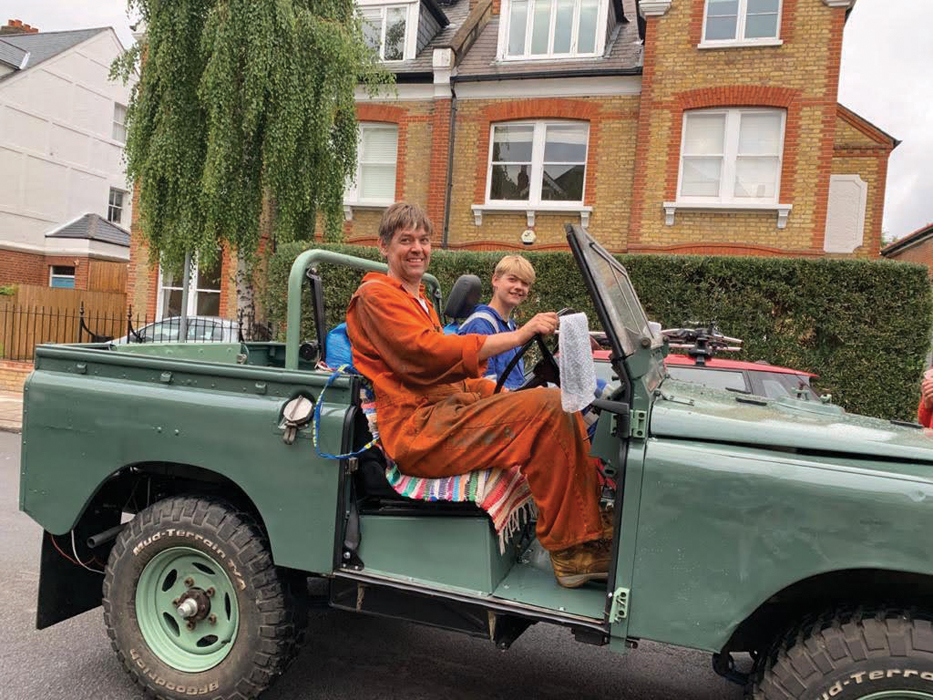 How much did you spend?

Harry: March and I did a deal:  I would buy the parts for the Landy and would keep an honest spreadsheet of all the costs, but all tools needed would come from a “special account” that we didn’t need to discuss! So I now have a very nice Mig welder, compressor and a few other tools that might not otherwise have found their way into the workshop. . .

The total cost for the Landy and getting it through the MoT was £4500 – or £5500 if you include the Puma seats, canvas seat covers, new hood and sticks and a few other bits and bobs that weren’t critical to the build.

Will we get our money back? I doubt if we’ll ever know, but this project was as much for the journey as for the cost. Besides, it’s not for sale. 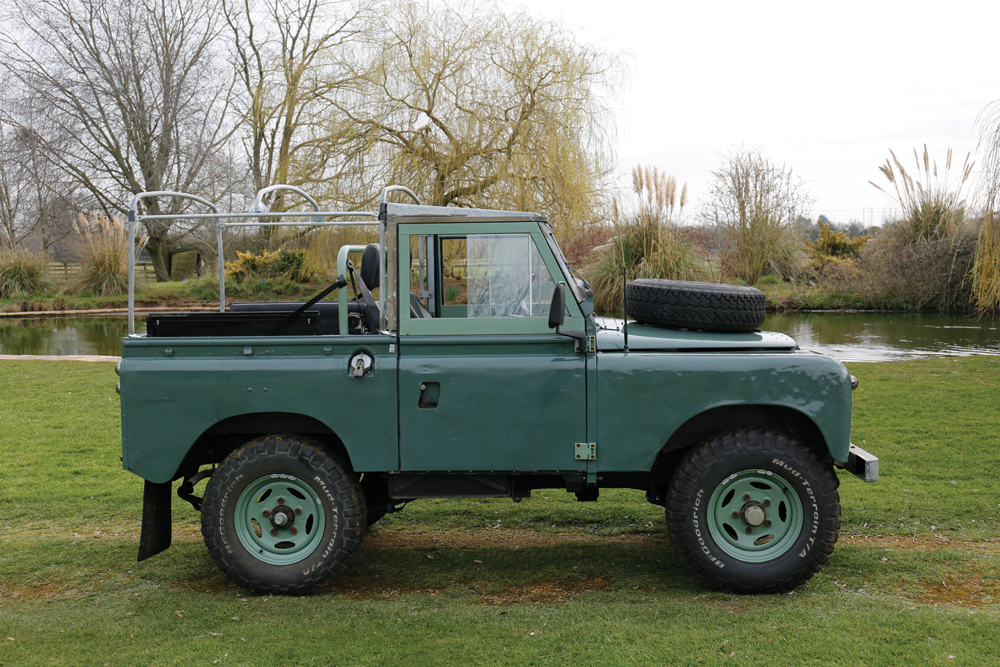 It turned out be a cracking-looking restoration

What was the family’s reaction?

March: We all like projects. For a long time we had a lawn mower from the 1950s; we built our own climbing frame, rebuilt a go-kart, guinea pig cage and many more – some weren’t very successful but most worked OK at least for a while.

On our project Series IIA, Tess (my youngest sister, now 12) oversaw nuts and bolts (old and new), while Skye (18) and Libbie (14) mostly ignored it to start with. Mum hated the grease stains on hands and clothes (and the sofa and the pillow cases), but a five-litre pump dispenser of orange Swarfega and coveralls reduced the problem (a bit).

Any times you thought of giving up and playing Play Station with your mates instead?

March: I’ve never really been a Play Station person, maybe because we never had one. Dad’s view on tech was that if you can’t mend it, you can’t have it. That means all four of us can now change screens, batteries and microphones on mobile phones.

The start of the project was very exciting but there were times I thought of giving up - when the chassis and bulkhead felt overwhelming and I needed a big push to get through them. Dad was quite good at this.  The wiring was very daunting at first, but OK once I got into it. It really was volts on one side, a bulb or whatever and then an earth.

I started boarding school in March 2015 and the school had a great workshop, which really helped me with techniques for brazing and welding. I think the project benefited from my GCSE science and my GCSEs benefited from a bit of practical application. 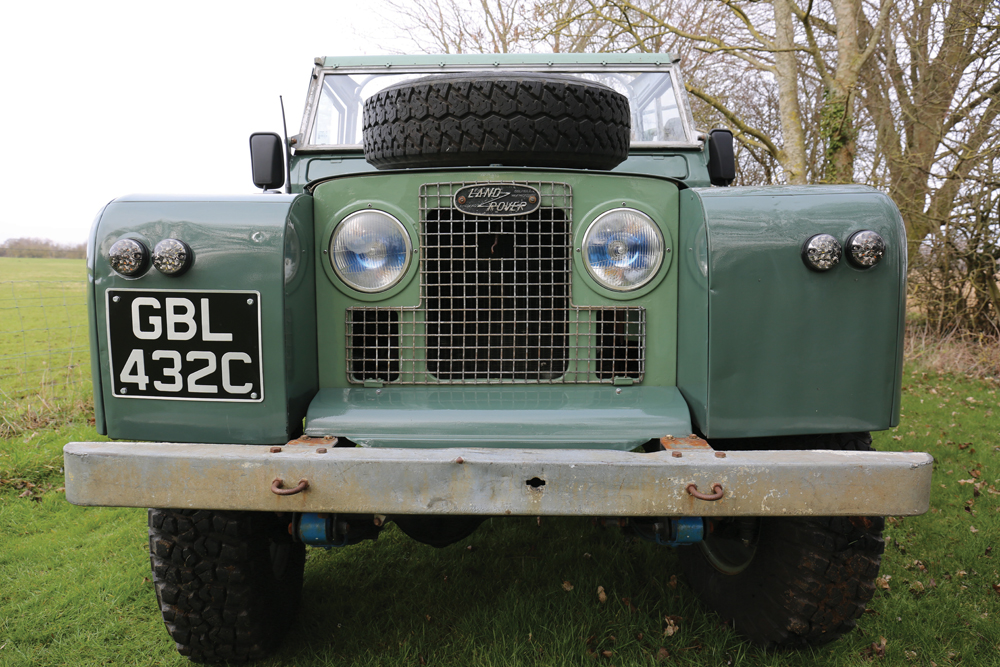 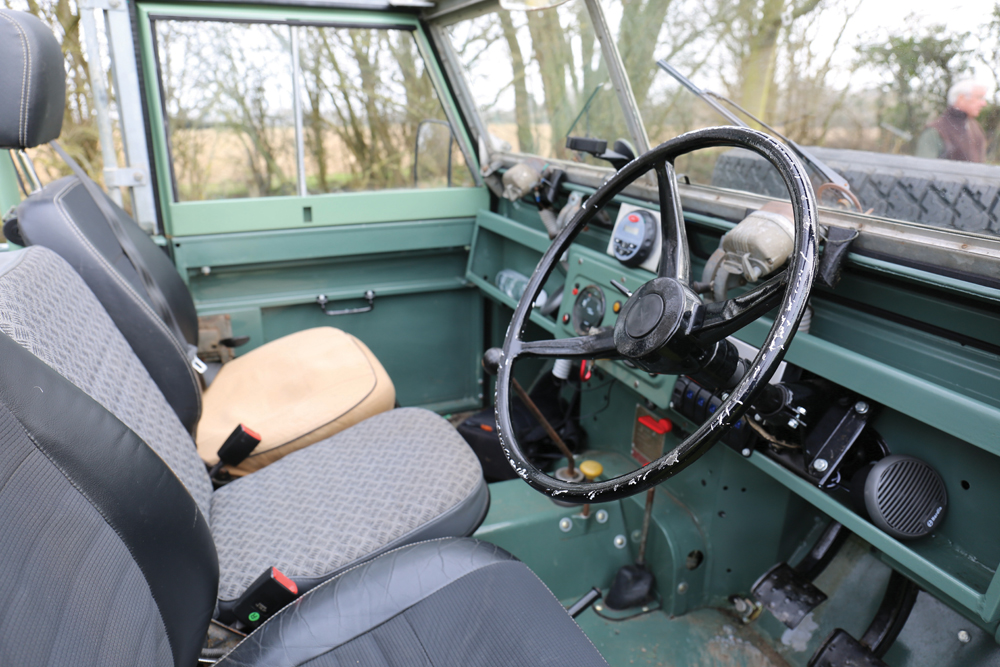 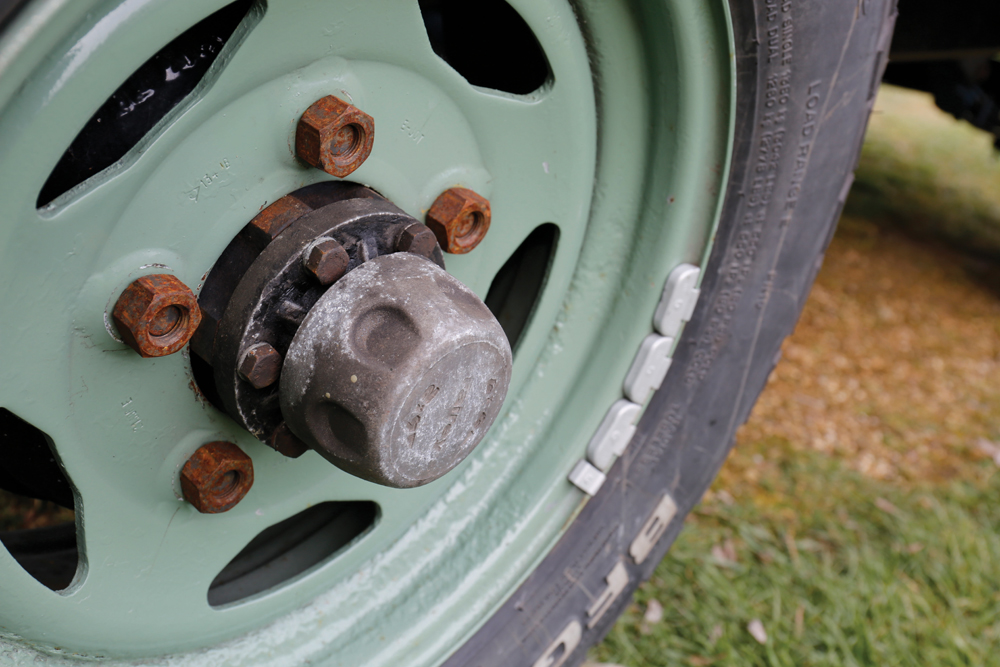 Did you rely on any reference books?

March: Dad had a load of books already. Richard Hall’s Series II book was brilliant; we also had three Haynes manuals and all the electronic LR Workshop manuals. I used Pinterest to get inspiration and there were a few really helpful You Tube channels, too.

What were the toughest parts?

Tell us about lockdown…

March: School shut in March but teaching carried on (I was supposed to be doing my GCSEs) but the sunny weather was a bonus for paint drying. And I was aware that in a year’s time I would be learning to drive and wanted it finished (the original base plan)!

It was a great project and focus during Covid. The extra months gave me the space and time needed to finish it off.

(Sister) Katie: The family guinea pig must have thought it was all very strange as the Landy was rolled on and off the lawn; any one of the six of us would help, lift/move/hold/support some part of the car while March would be doing “something”. . .

March: When we took it for its first MoT there was oil pouring from the rear diff. We had to swap the diffs and fit the old freewheeling hubs on the Friday night before driving it to Cornwall on the Saturday for the annual summer holiday. Dad forgot to order the soft top, so we drove there topless – which made it cooler and a more memorable trip (in hindsight). 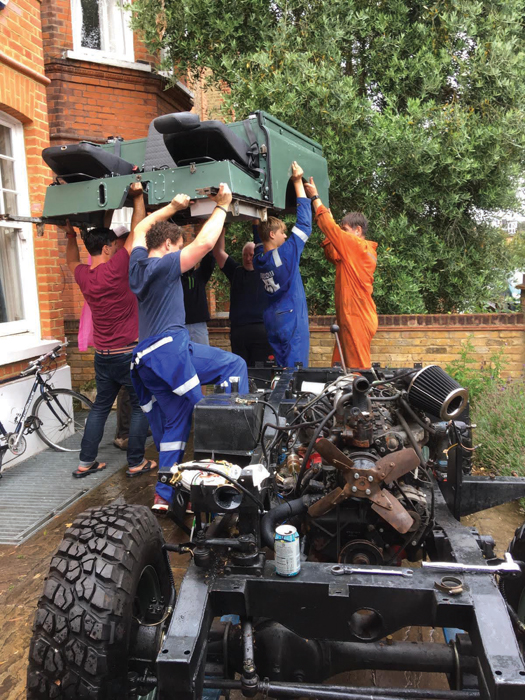 Friends and family all mucked in when required

What bits did you enjoy most?

March: July 25, 2020 - just after Lockdown 1 had ended and we moved it from the back garden to the front of the house – that was the best. All the family and many friends from our local community were involved. My little sister Tess did all the filming, while Mum and my other sisters organised and my uncle took charge of the barbeque. Cousins wielded spanners and local dads did the heavy lifting, drank beer and ate pizza. It rained nearly all day. The aim was to keep the sections as big as possible but still be able to get them through Mum’s new kitchen. It was a case of strip, remove, lay on lawn, carry on.

We managed to leave the springs on the axles and by lunch we were completely stripped and the engine/gearbox, chassis, axles had been carried through the house to the front drive, ready for reassembly.

After lunch it was all about rolling chassis, getting the body parts through the house and bolting in place, lots of lining stuff up, then wiring. We got there eventually.

We started at 8.30am and Dad drove it off the front drive at 6.20 in the afternoon. I did a lap around the block with just my Dad and then another one with my whole family (after filling it up with petrol)

I think it only hit home how cool it was after everybody said it was AMAZING that I had built a car. Some even cried!

Harry: March said later: “I don’t want to be defined by the Landy”. Too late, I think! 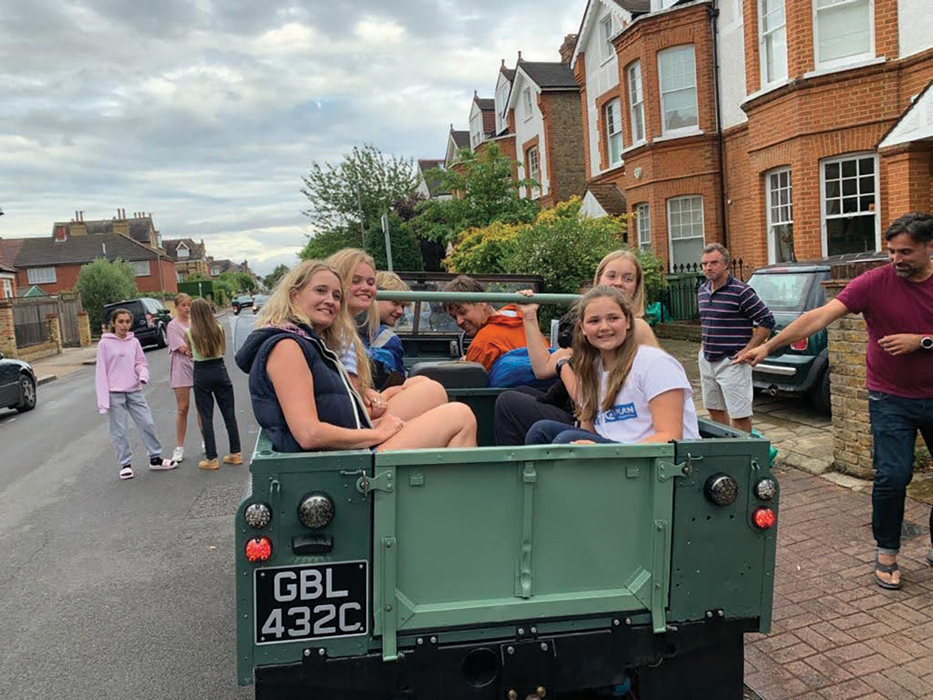 Where do you go from here?

March: It was very satisfying to finish the project, but I’m eager to do more work on it. I’m planning to design and build a spare wheel carrier as as an A level project and I’m considering an electric conversion based on a Nissan Leaf engine for the future. I’d also love to do a Defender 127 or 130 and then drive it round Europe after my A Levels.