The next train arriving at Platform 2 is . . . A Land Rover. Eric Hayman illustrates the role Land Rovers have played on the railways over the years

Land Rovers are the world’s most versatile vehicles, so it comes as no surprise that over the years many have been converted to run on railway tracks.

Road-rail vehicles are nothing new. In the 1950s a Scandinavian rural bus/train service ran along railway tracks from station to station, then by road to serve remote village.

Nowadays, all manner of construction plants have hydraulically-deployed steel flanged wheels to let machines drive along, and even operate, while on normal railway track.

So not just the best 4x4 by far, but 4x4x4 feet eight and a half inches as well. Happy road-railing.

1961: Publicity stint
With their obvious abilities as all-purpose vehicles, Land Rovers were soon adapted for use on the rails. In 1961 around 150 members of the press assembled at Knowle station in the West Midlands to witness a Series II (2868 UE), fitted with a 2.25-litre diesel engine and railway wheels, pull out of the station towing 20 flat trucks loaded with Land Rover vehicles.

It was a publicity stunt that both showed the versatility of the Land Rover, as well as highlighting the company’s export drive, for it was from here that Land Rovers were loaded onto railway flats for transport to the docks. 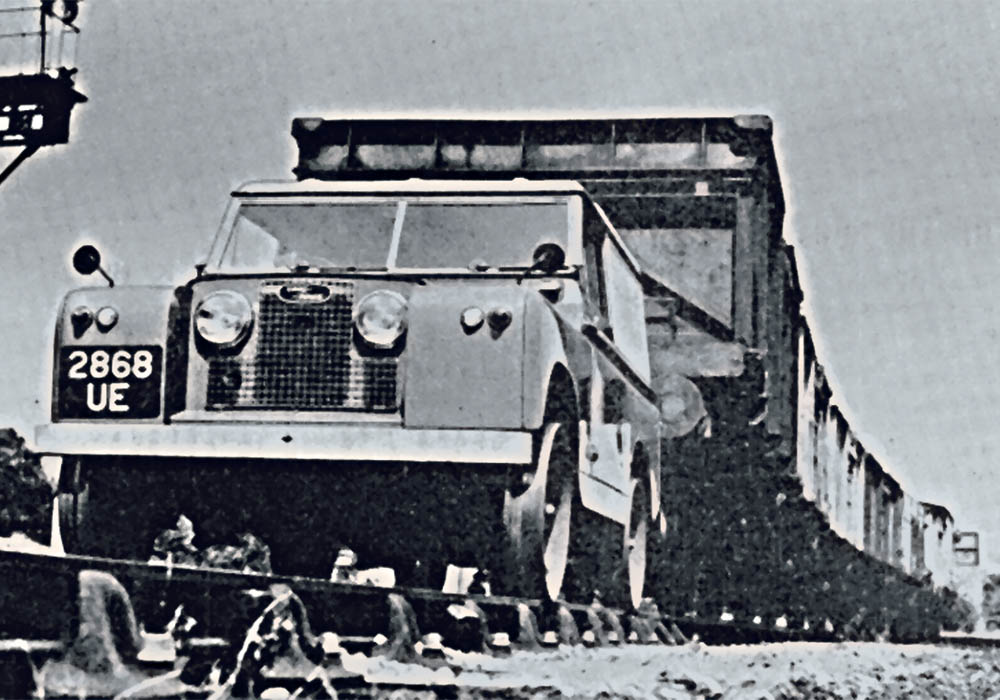 1962: Commericial uses
Land Rover’s Special Projects department soon saw the commercial possibility of railway use for their go-anywhere vehicle. Associated Locomotive Equipment – a subsidiary of the Worcester engineering firm Heenan & Froude – was loaned at least three to adapt. One was fitted with steel rail wheels, one with thin solid rubber-tyred rail wheels, and the other had hydraulically lowered and raised steel rail wheels to act as guides while the road wheels, on a widened track to align with standard gauge rails, provided traction.

The latter was 6064 UE – a Series II LWB truck cab with tilt. In 1962, British Pathé filmed it being driven along a road to Knowle and Dorridge station, where it was lined up over a siding and the hydraulics operated for it to take to the rails.

At first it was used by BR’s Eastern Region signalling department, but in 1965 it moved to the Keighley & Worth Valley Railway. Unfortunately the volunteer-run heritage line could not afford to buy it, so 6064 went back to Land Rover. The rail gear was stripped off and it was sent to the proving ground at Eastnor Castle as the groundsman’s vehicle. Later sold off, 6064 UE is now in the hands of Land Rover and railway enthusiasts Hazel Penrack and Ed Newman, who hope that it may once again ride the rails. 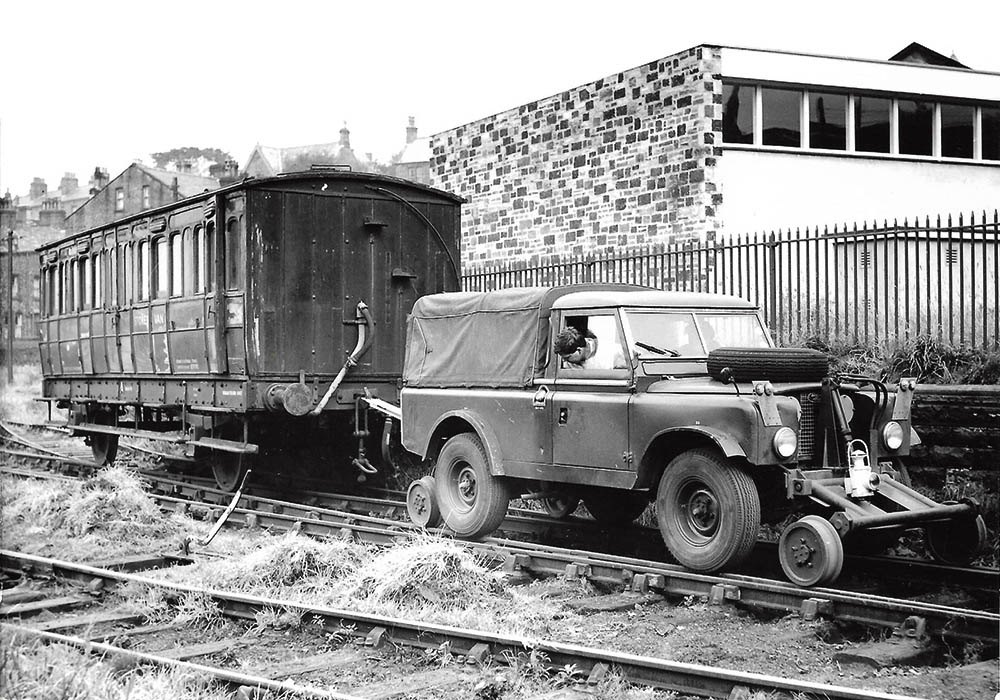 1963: Longmoor military railway
The Longmoor Military Railway in Hampshire had a Series II full tilt SWB with its road wheels replaced with steel flanged railway ones. At the front it had the typical military double-height bumper, which may have served as buffers to shunt railway trucks.

The round disc on the right front wing was the yellow bridge plate. In active service the plate would have carried a figure in black to indicate the weight of the vehicle when fully loaded.

25 DM 51 was was due to be converted back to road wheels at the end of August 1963. The railway trials were successful, except that – not surprisingly – it would overheat when travelling in reverse. 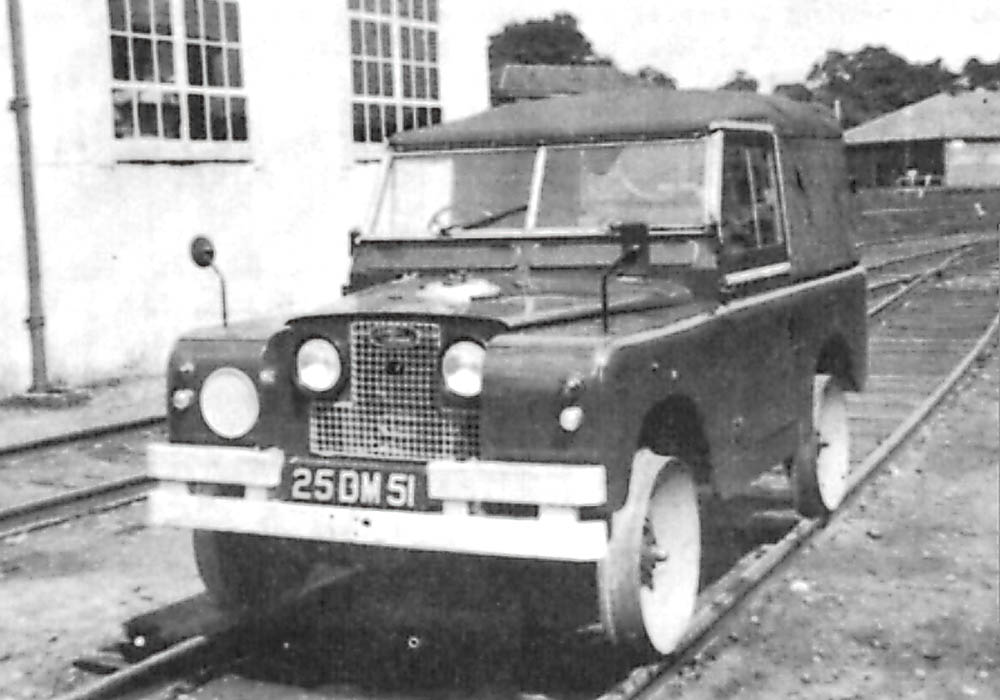 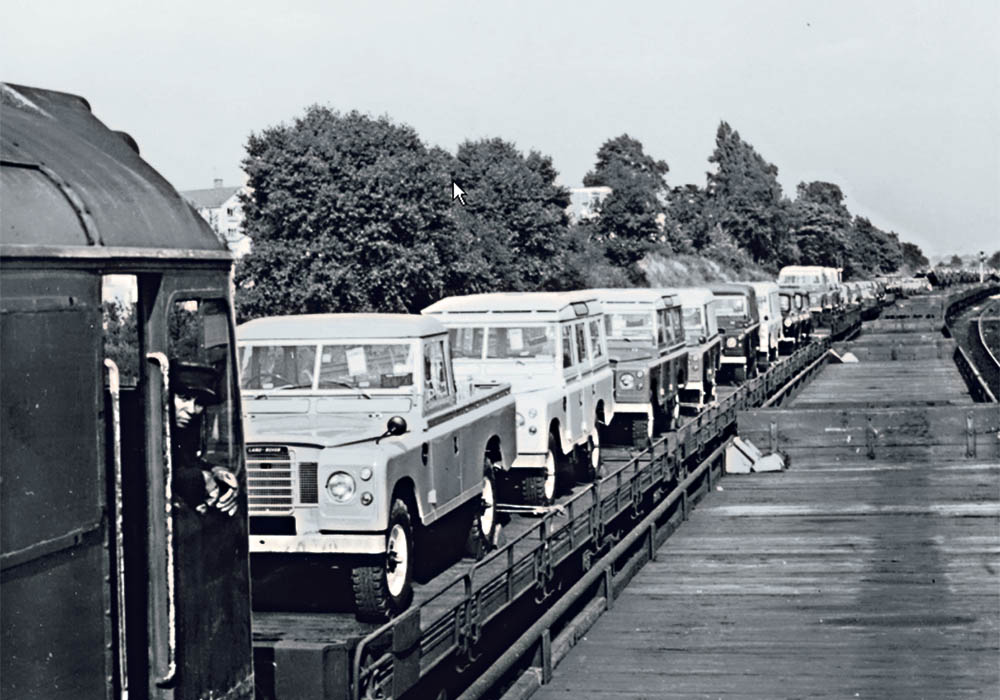 When the Series III was introduced in 1971, Land Rovers destined for export were still being taken to the docks by train, lashed down on open railway flat wagons.

1989: Ready for road and rail
In 1989 there was a Railfreight exhibition at Cricklewood, London, where two bi-modal shunting tractors were on show. The Unilok (below) and the Trackmobile (left) had both road tyres and railway wheels. Changing from one to the other was achieved by hydraulically raising or lowering the appropriate wheelsets. 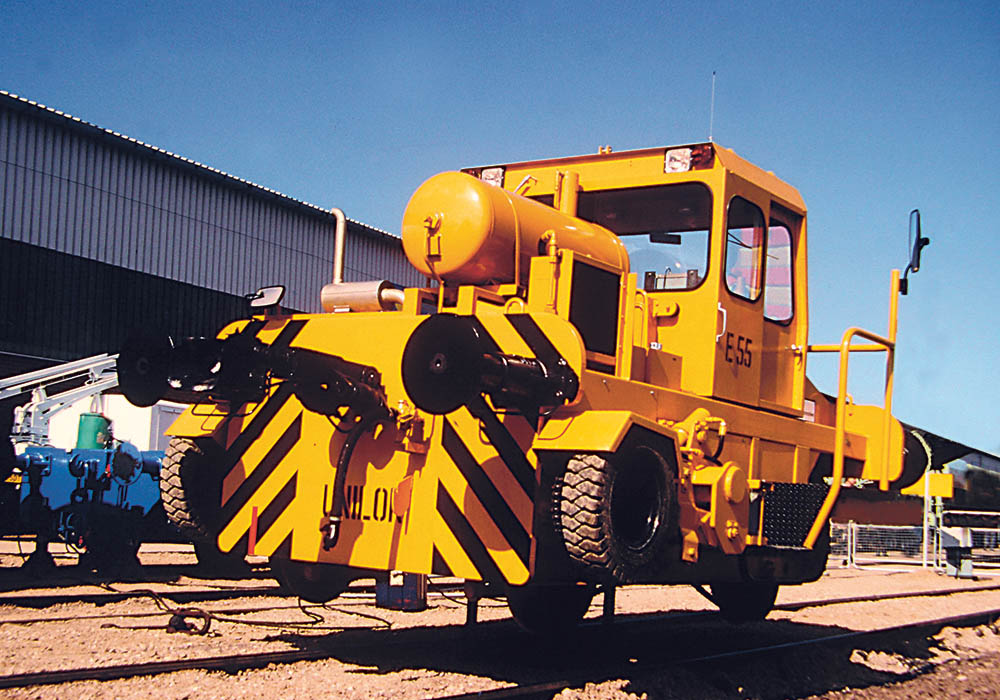 Behind the truck cab is a custom-made pick-up body with an Italian-made Jolly GL 1205 RB hydraulic crane. At the front and rear of the Defender are the railway wheels, which can be lowered to sit on the track and act as guides, while the road wheels rest on the rails and provide the traction. Hydraulic legs at the rear can be used to act as stabilisers when the crane is in use. Sighting poles help the driver align the flanged wheels with the track.

With a 1998/1999 registration plate and the railway number XLR 8123, the vehicle is a survivor from the six Defenders that Balfour Beatty originally converted for road-rail maintenance. 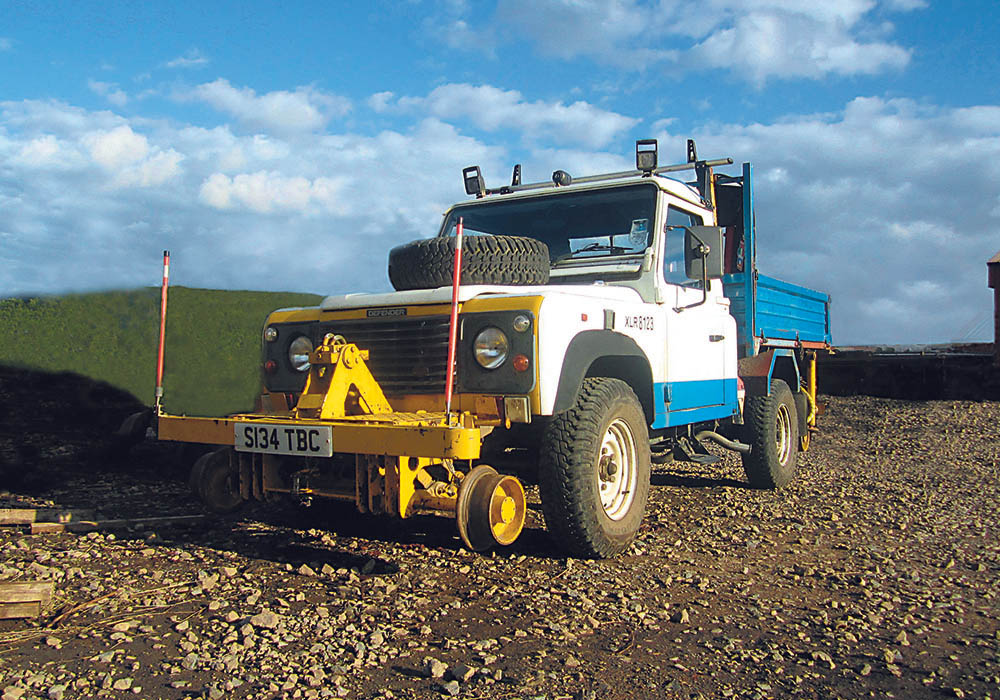 To ensure good traction on both dry and wet railway track, the road tyres carry 80 per cent of the weight, with the rest borne by the rail wheels. Single- and double-cab pick-ups have modular hard-top canopies that provide secure weatherproof storage for tools and other equipment. A roof rack over the cab carries the spare (road) wheel and other items.

There is an LWB Station Wagon just as at home on a railway track as a mountain one, with high-mounted work lights front and rear. A single cab LWB chassis with a high box body is another variant.

There are also two-, four- and six-wheel road trailers that need just two railway wheels and can be pulled or propelled. The six-wheeled trailer can be used to transport and leave in situ a box body that provides work site welfare facilities. Others can carry mini-diggers, or even weedkiller and deicer tanks for on-the-move spraying. Lightest of all are easily hand-lifted tray trailers for extra load capacity. All are designed for haulage by Defenders. 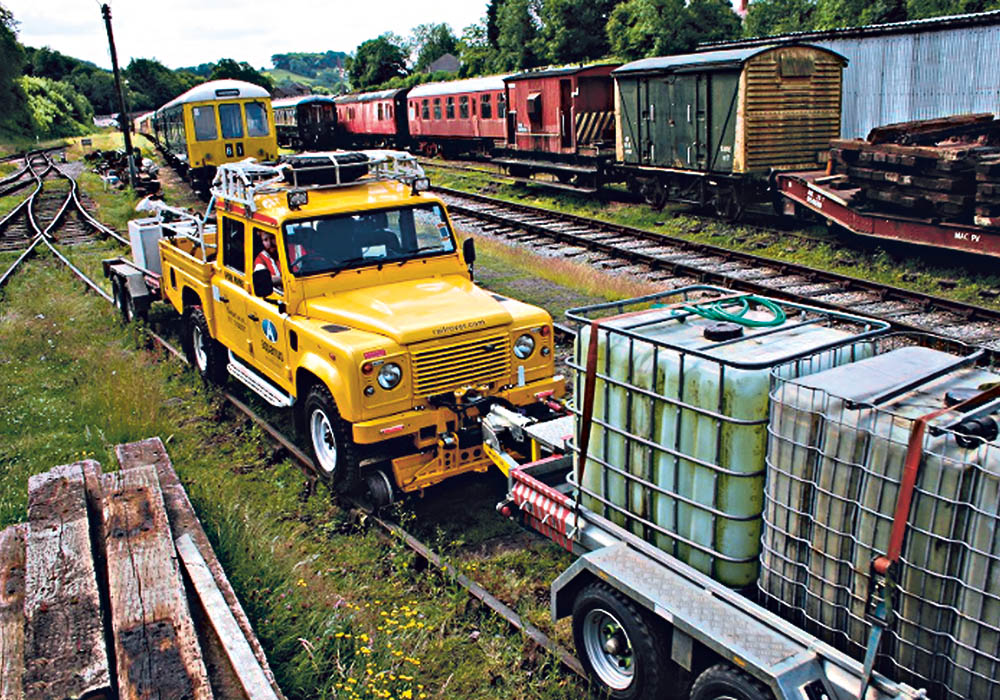 1989: Discovery 1 launch
Owner of Aquarius – James Platt –was involved in the road-rail version at the 1989 launch of the Discovery. The road-railer ran on the South Devon Railway, in police livery. The work was carried out by the Worcestershire firm of Bruff, which in the 1980s produced other bimodal track maintenance vehicles for British Rail. 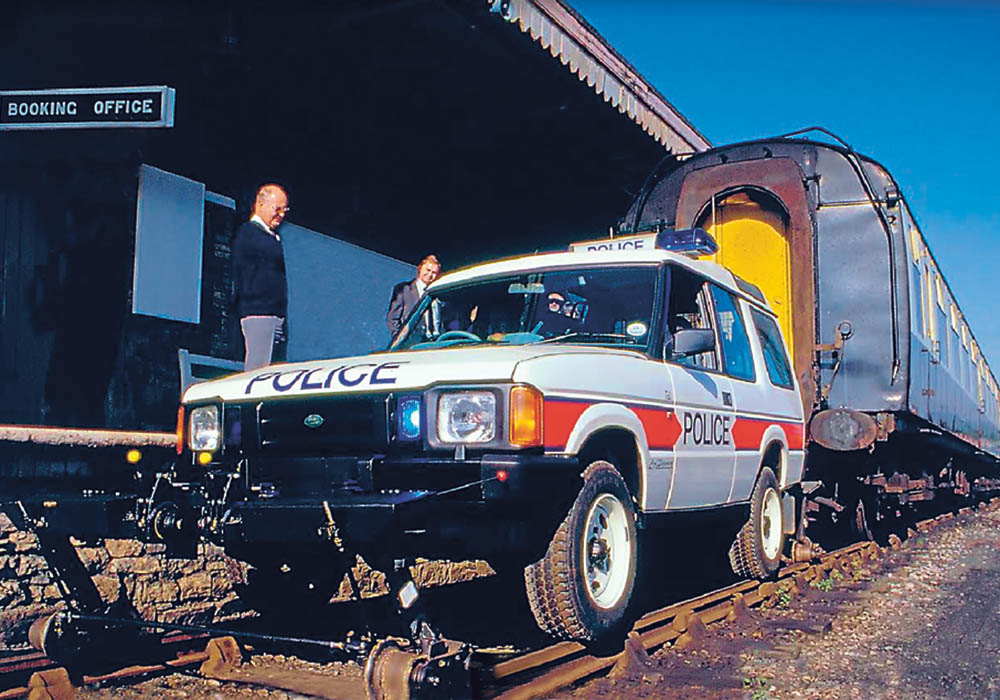 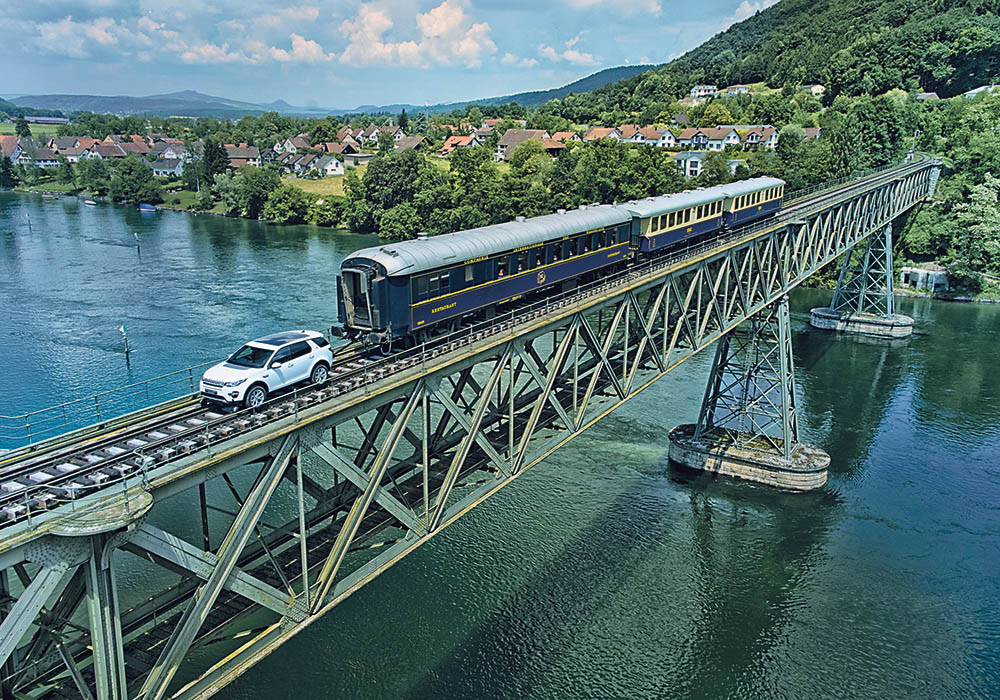 2009 conversion
This 2009 conversion to the circa 1966/67 Series II LWB pick-up is used on the Statfold Barn Railway in Staffordshire. It is mounted on two foot gauge railway wheels. Chain drives run from the rear axle to sprockets on both outer ends of the railway wheel axle. The front is supported by a four-wheel unpowered bogie replacing the standard Land Rover axle. The design is by owner Graham Lee – seen driving in the photo – in conjunction with Joe Nemeth Engineering in Gloucestershire. Nemeth specialises in miniature locomotive building and repair. 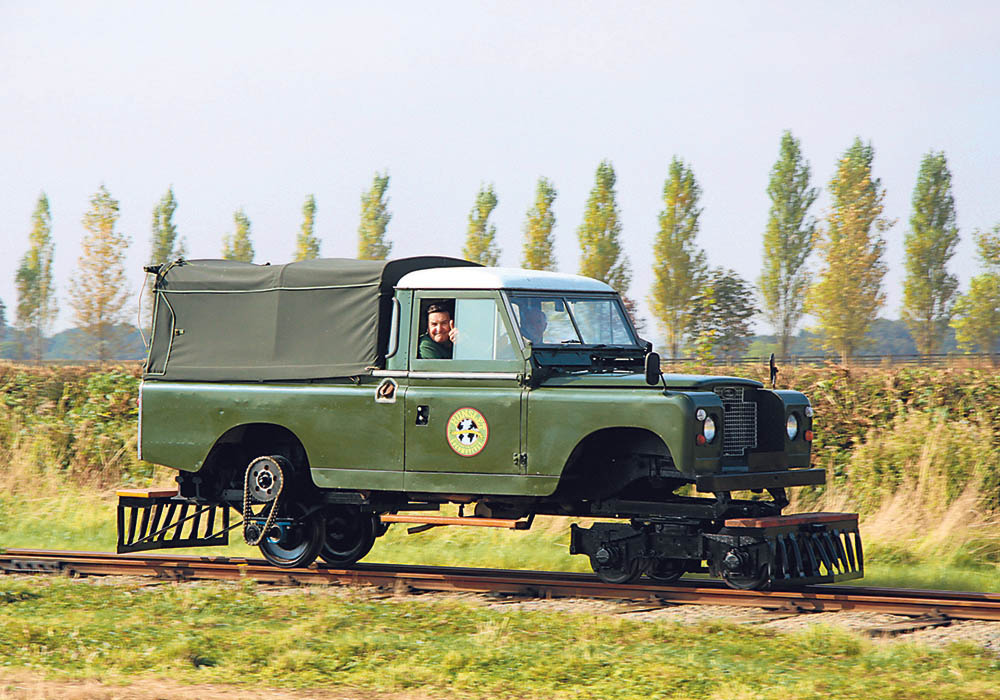