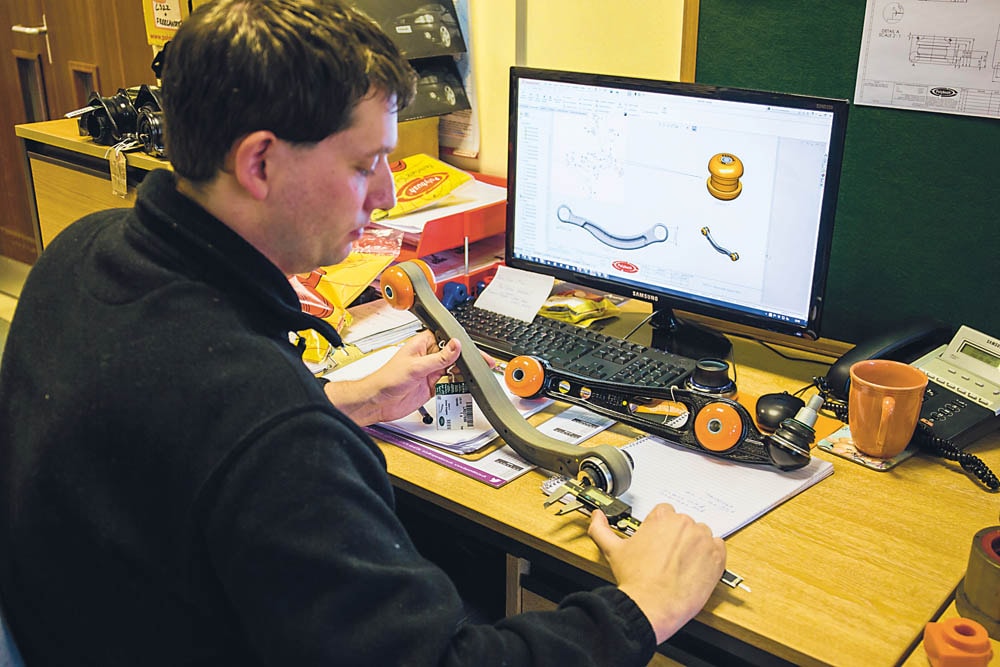 When I was invited to Polybush’s Wrexham factory to see suspension bushes being made, I expected to see polyurethane entering one end of a high-tech machine, with nicely packaged suspension sets popping out of the other end. The process is certainly high-tech in a scientific way but, in practice, each Polybush is created by hand from start to finish. And there’s no white-coated quality technician at the end of the line – every bush passes through so many experienced hands and is checked by so many eyes that it’s hard to imagine even the slightest defect reaching the end of the process. Of course, this makes manufacture hugely labour-intensive, but the company sees this as the best route to their ideal product.

Polybush is a family business whose profits continually support development of new products, and will soon enable an expansion of the premises and new equipment to help cope with demand. But the almost cottage industry approach won’t be changing. And it’s rather fitting that these aftermarket bushes for our Land Rovers are handmade and British, just like our Land Rovers used to be. As Land Rovers develop, Polybush also moves on, still supplying bushes for the older beam-axle models, but also for the later independent suspension Freelanders, Discoverys and Range Rover L322 and Sport, while bushes for current Range Rover and Range Rover Sport 2 are under development and about to be trialed.

As users of Polybushes, we Land Rover enthusiasts are in good company. The brand also caters for Bentley, Aston Martin, Lotus, Triumph, Jaguar, military and competition vehicles, plus industrial applications. 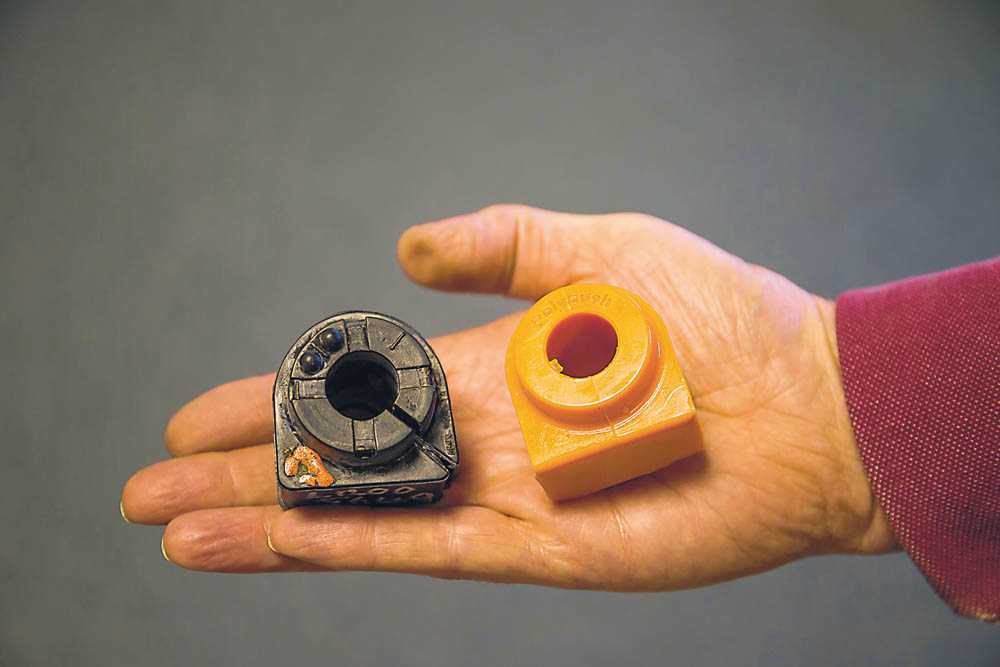 These Freelander 2 anti-roll bar bushes (original Land Rover in black, Polybush in orange) demonstrate the dimensional similarity. Despite equivalent hardness, the Polybush is an easier fit

Engineer, Mathew Wilbrey, designs Polybushes to exhibit equivalent, or better, performance than the original Land Rover bushes, while fitting accurately to original Land Rover suspension components. The molecular structure and its electrostatic forces within the polyurethane is formulated for each application, with the bush’s hardness (a measure of its ability to deform elastically and return to shape) being graded in accordance with the industry-standard Shore A Hardness scale.

Prototype bushes are cast in liquid form into steel moulds, which are designed in-house and manufactured in Polybush’s machine shop. They are test-fitted to a vehicle to confirm performance and ease of fitting, after which design adjustments are made where necessary. As we know, bushes join two suspension components that move relative to each other, so the external shape of the bush is also considered to avoid hindering the movement of the adjacent component. 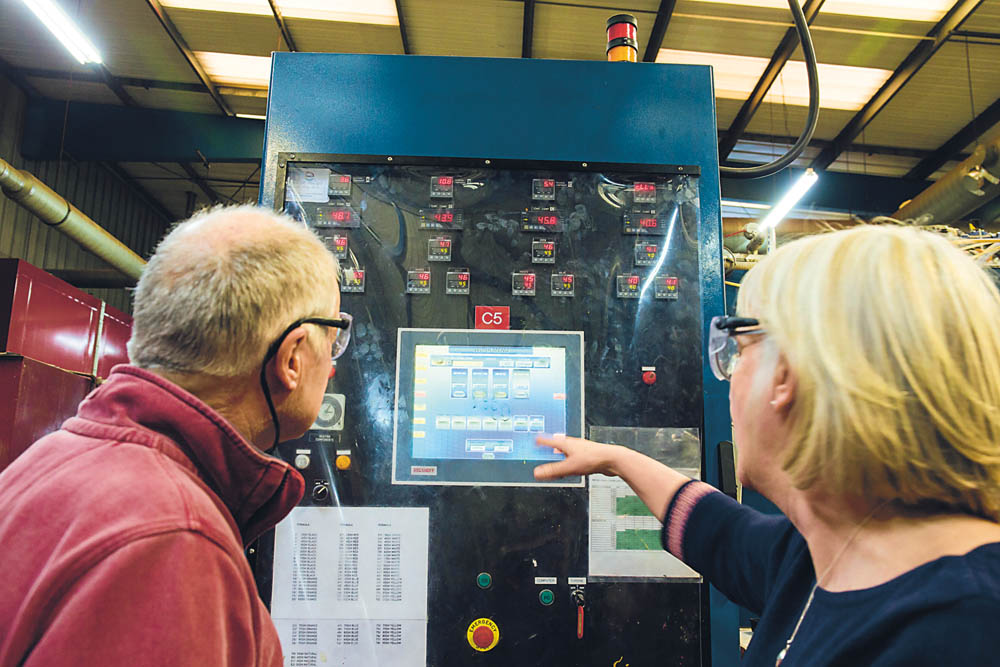 Polybush’s Hayley Smith explains the workings of a computerised mixing machine programmed to deliver the precise formula for suspension grade and colour.

Mixing the formula: Polyurethane is mixed in one of several £160k computerised mixing machines, and this is the first step to achieving the required hardness of the finished material. Pigments are added here, giving the familiar blue, red, orange or black colouring, and the machine removes gases from the mix to avoid porosity in the final product. With compositional accuracy ensured, the process now becomes hands-on, as operators draw off the liquid needed to fill the individual moulds. 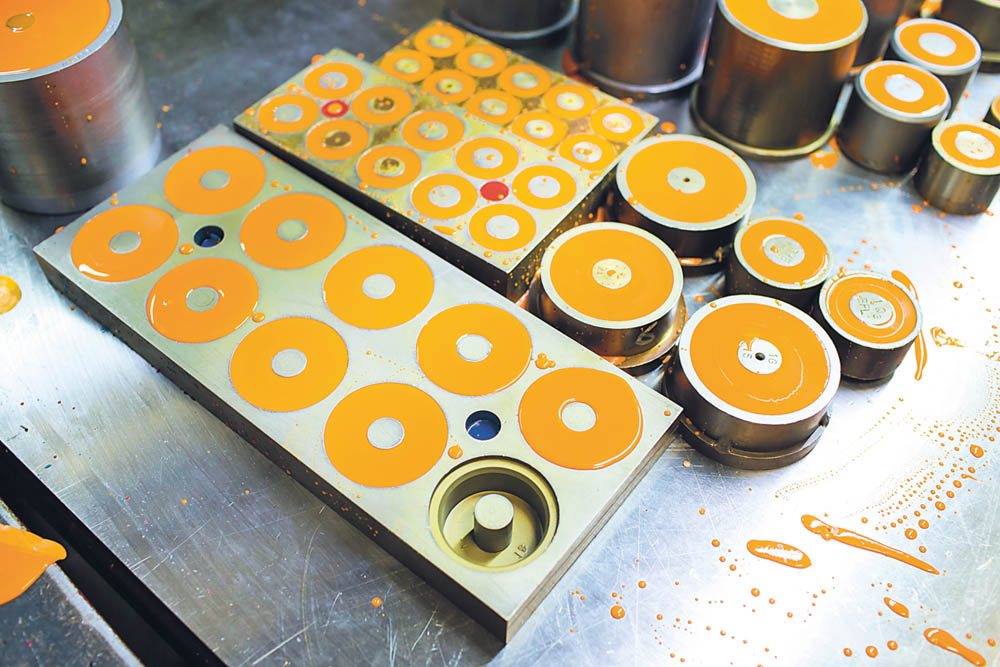 The bushes are made in small batches, each one cast by hand into the preheated steel moulds placed on the heated table.

Casting the bushes:  Each Polybush is formed in a steel mould into which the liquid formula is poured by hand. The moulds are preheated and laid out on heated steel tables, ensuring temperature remains constant during pouring and setting. When solidified, the new bushes are removed from the moulds and transferred to ovens where they are cured for up to seven hours. At this stage, the desired molecular chain in the material is established, giving an irreversible change in the material properties. Thus, during use on the vehicle, the bushes will continually return to their designed shape after natural deformation during suspension movement or after long-term static compression. 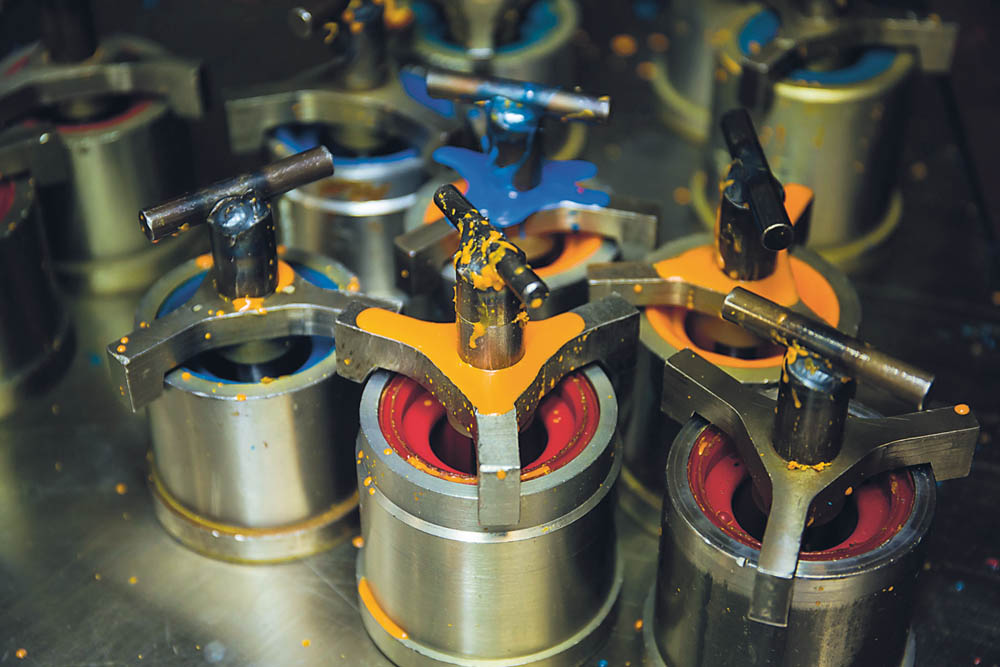 More complex bush shapes demand more complex moulds. These three-piece moulds can be fully dismantled to remove the finished bush. All moulds are engineered by Polybush. 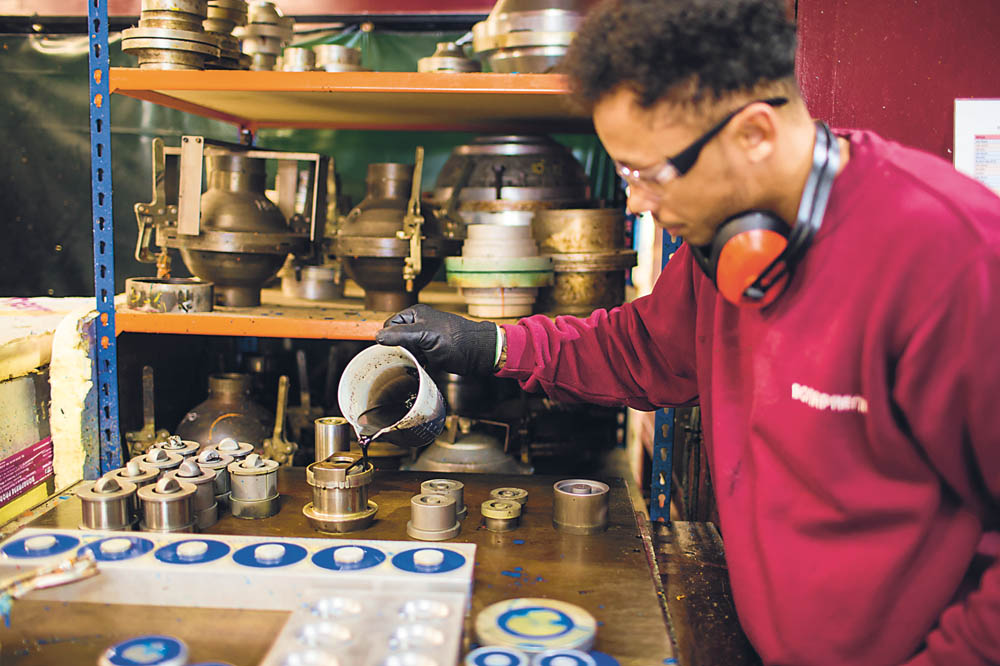 Surface finish of the mould, temperature, pouring rate and a steady hand are critical in producing the perfect bush. A final waft over with a gas torch ensures removal of sub-surface gas.

Finishing off:  As with any cast product, ribbons of ‘flash’ will form where the material has slightly overflowed the mould or seeped through joints, and is quickly removed by skilled hands. Depending on their shape, some cast items endure shrink-back during cooling, usually affecting the finished length. To counter this, bushes are cast slightly long, with the excess (including the shrink-back) trimmed off. Finally, the individual bushes are collated and packed into vehicle sets, ready for dispatch. 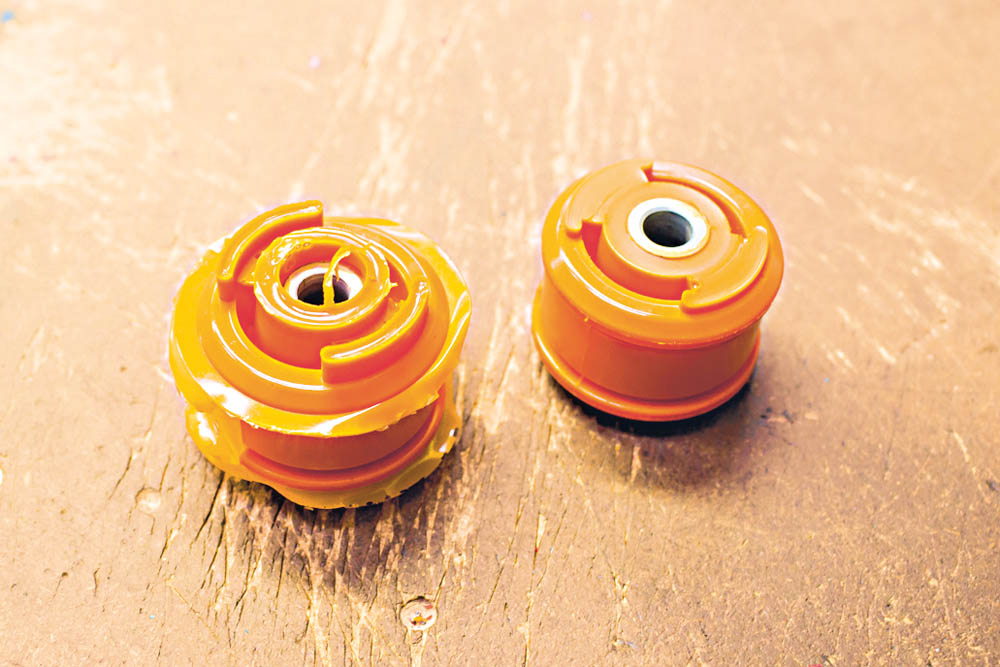 The bush on the left is straight from the mould with flash and shrinkage in the extended top. Right: a similar bush after trimming and flash removal. 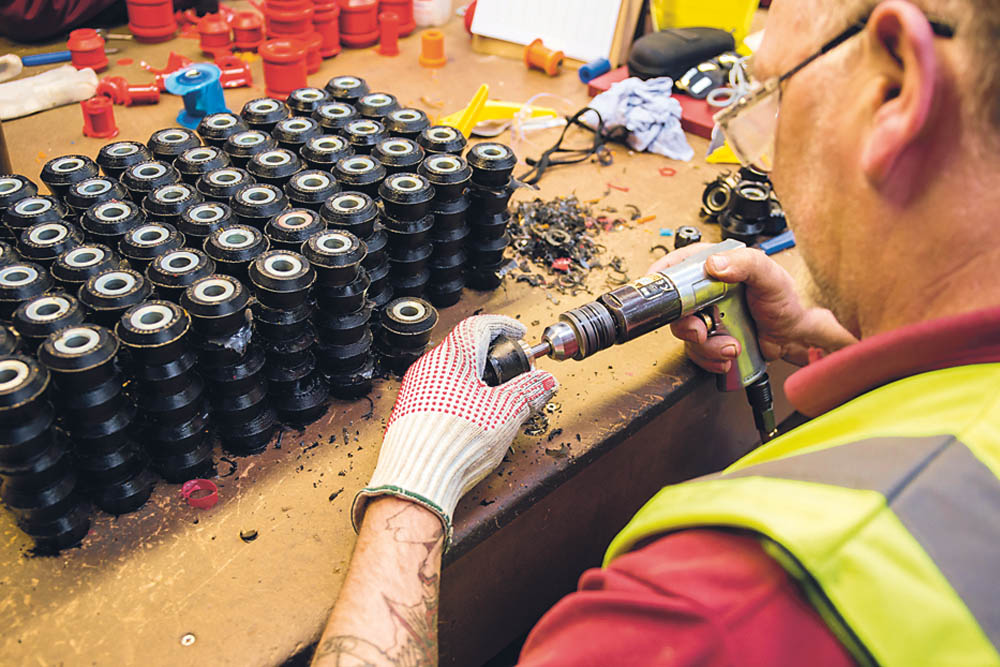 Each individual bush is inspected before trimming off any flash and excess material using hand tools, then re-inspected. 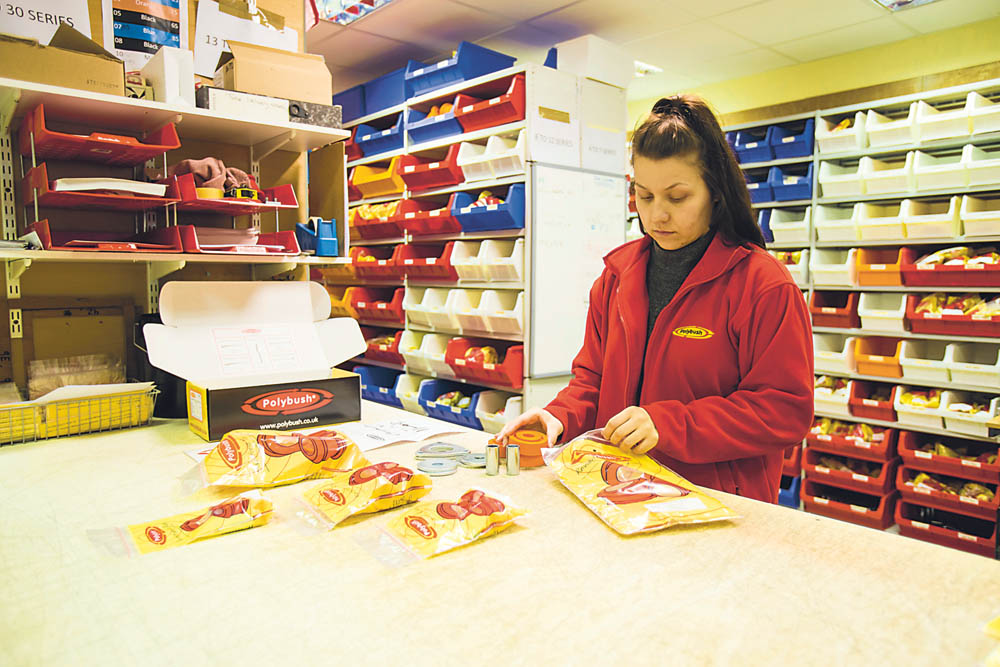 Alex Bryan demonstrates the final stage of collating the bushes into vehicle sets, ready for shipment.

Polybushes are well known for their colour grading. Blue (comfort grade), with a hardness of 65, gives a feel similar to Land Rover’s own bushes. Red, 85 hardness, is intended for race vehicles where sharp control and response takes priority over comfort. These grades evolved during the era of beam-axled Land Rovers, but modern Land Rovers with more compliant independent suspension have the equivalent of the firmer 75 Shore hardness material to maximise handling precision, as provided by the orange Polybushes.

Ultimately, the choice of grades comes down to the personal preference of the driver. 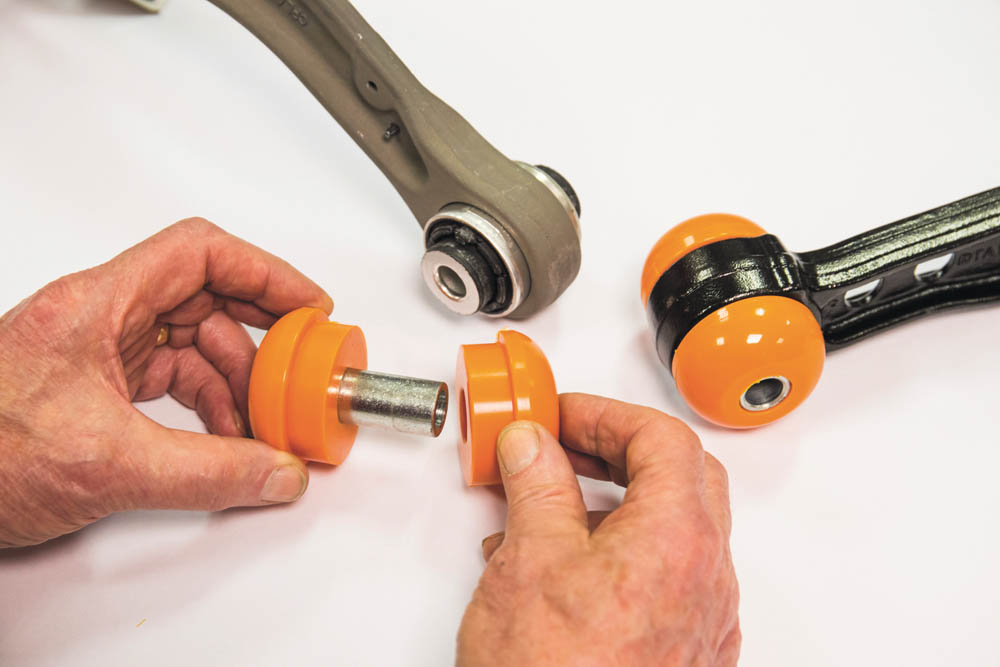 Prototype bushes for current Range Rover and Sport are designed for ease of fitting and minimum interference with the adjacent component, while replicating performance.

Polybush staff are happy to consider producing bushes and kits to suit customers’ needs. These have included an expedition kit giving Defender radius arms a more controlled location at the axles while having extra-compliant bushes at the chassis to suit a particular terrain. For desert applications, defence customers have been supplied with radius arm to chassis bushes bonded to the triangular chassis plate to prevent sand entering between the bush and the plate and causing erosion. 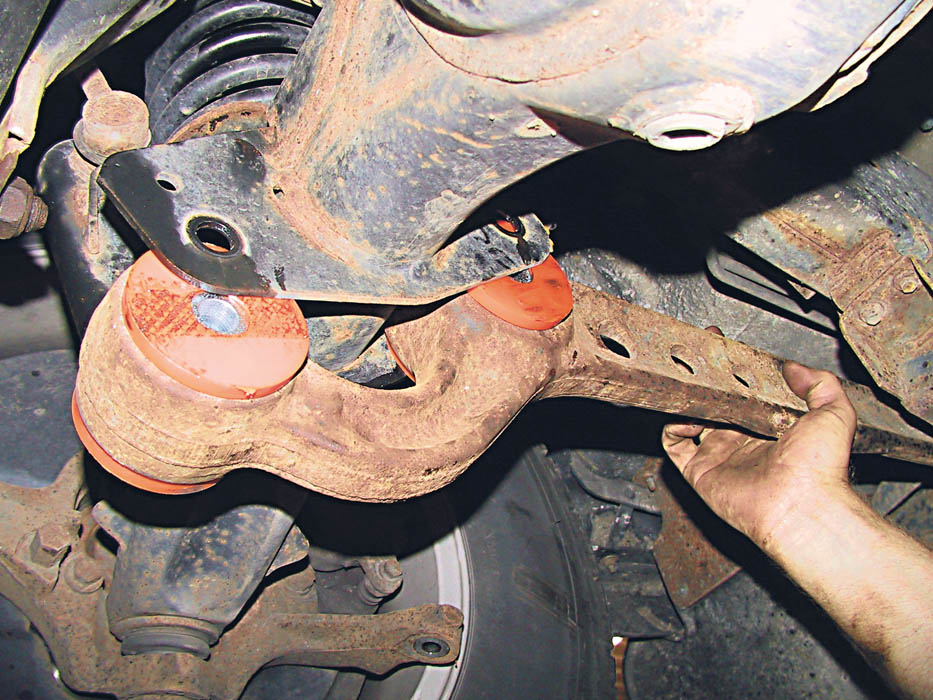 Polybushes are a direct replacement for the original Land Rover suspension bushes. They are easier to fit, saving labour time, and are fuel and oil resistant.

Polybushes are designed for ease of fitting, and many types can be inserted using a vice with appropriate protection. Others may need a hydraulic press (this will certainly be needed to remove some original bushes), though pressing is a quick and simple job. 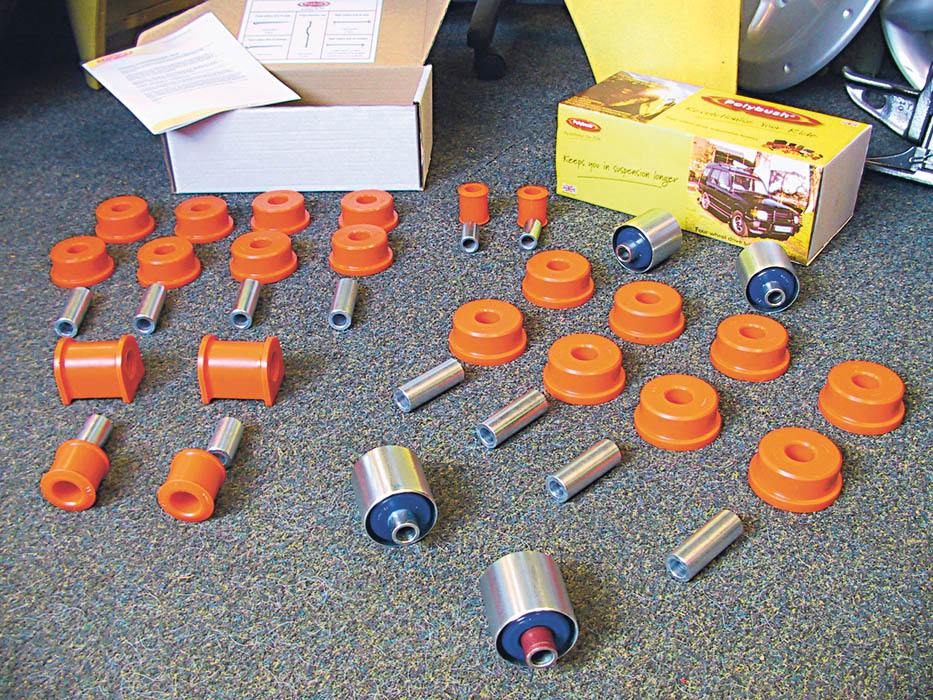 This full suspension set for Ed Evans’ Discovery 2 proved its worth over 50,000 miles, with plenty of life remaining

Are they as good as Land Rover originals?

That’s a question that can’t be answered without exhaustive comparative testing. Fortunately, I’ve done exactly that on my own Discovery 2.

It’s great to see a successful business still making its products by what appears to be old-fashioned methods, dependent on the skills of the operators. But this process is all about ensuring the real secret of Polybush performance – the creation of long-chain molecules held together with just the right electrostatic force inside the material. A lovely blend of science and craft.