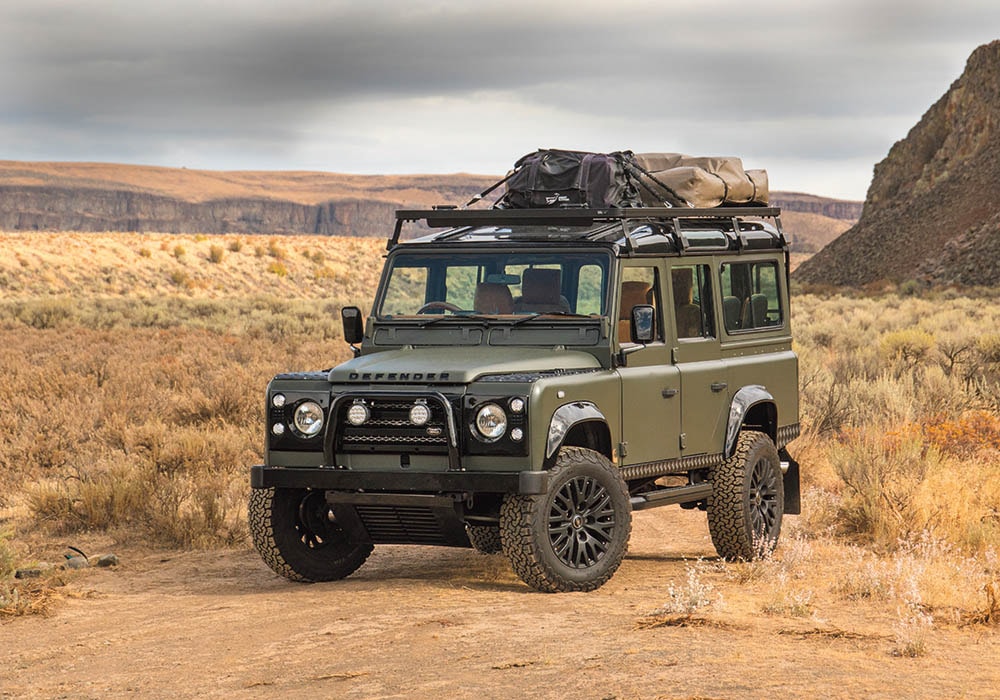 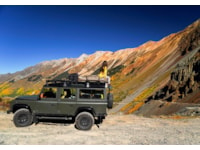 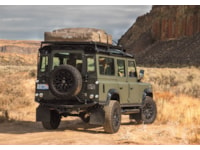 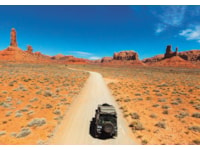 Ron Thomas wasn’t always a Defender guy, or even a staunch fan of Land Rovers. But he loved the idea of a good adventure and one day while travelling in St. Thomas, U.S. Virgin Islands, he glimpsed the boxy lines of a Defender 110. He thought it was simple, classy and oozed cool. In fact, he was so impressed, he took a photo, thinking that one day it would be a stylish and cheaper alternative to his full-size truck.

When the timing was right he called Tower Auto Sales, who specialise in exotic imports, to check their inventory. There were a few in stock, so Ron and his wife took a road trip to Pittsburg to kick some tyres.

They told the salesman they were just looking, but by the end of the day they were en route home from Steel City in separate vehicles.

With plans to do a major refit, Ron confessed that he bought the crappiest one they had. It was a 1988 One Ten with Defender badging and a 200Tdi. Although the drivetrain worked as it should, the underpowered Landy was deplorably slow. So much so, that he felt the need to raise an apologetic wave to truck drivers that became stuck behind him on the slightest of grades.

He’d heard rumours that Cummins would be releasing a crate version of their 2.8 turbodiesel, a powerplant that has been utilised in commercial equipment for a decade. He tucked the idea of a transplant on his mental desktop. But first, it was time for a cosmetic overhaul.

After stripping the cabin down to the floor, he designed an interior that would fit his travelling lifestyle as a BMX event producer (his previous career was as a pro rider). With the glass and doors removed, the body received a fresh coat of paint before being refitted with new seals. The seats were treated to brown Serengeti leather accented with black trim, as were the door panels and select portions of the dash. Outback, Exmoor fold-down jump seats were installed on custom mounts and the entire ensemble was placed over dirt-resistant black carpet and OE mud mats. 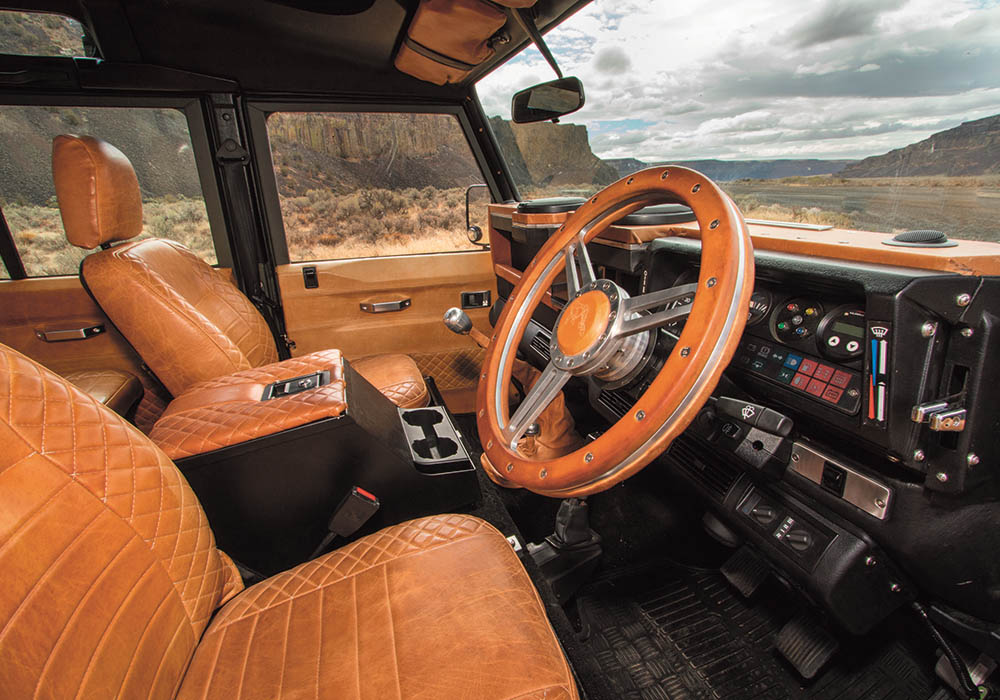 With the interior stripped down to metal, the entire cabin was treated to brown Serengeti leather accented with walnut and brushed aluminium 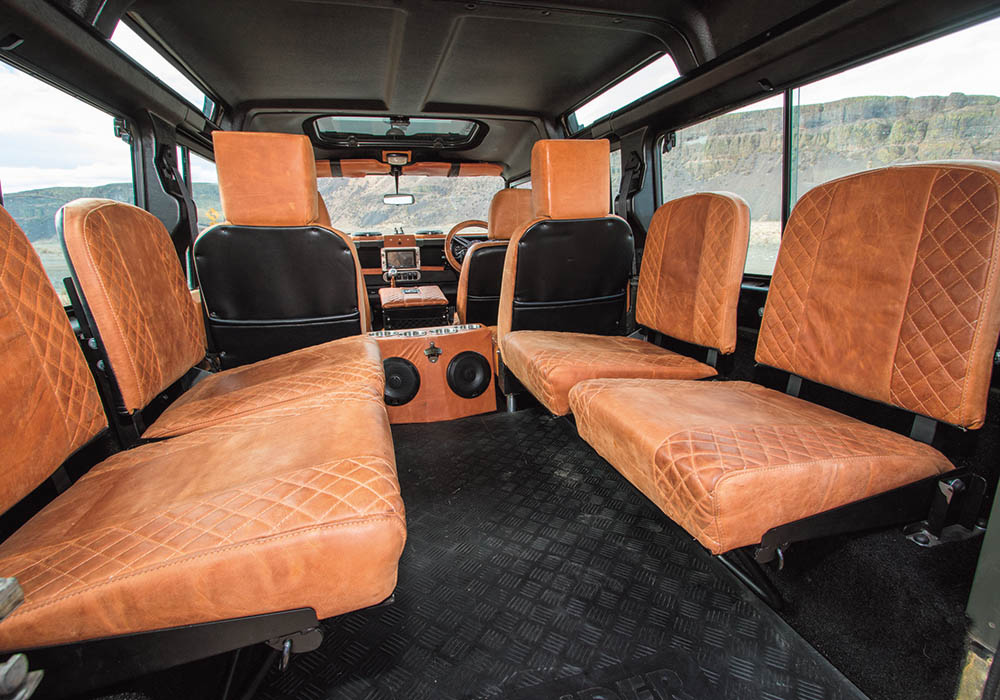 Power windows and door locks were then added, along with homemade billet aluminium hardware (Ron is also a hobby machinist).

As a pseudo audiophile, the sound system needed to rock the house. The result was a mix of Alpine and Pioneer components and 13 strategically-placed speakers to optimise the listening experience.

Rounding out the Defender's interior is a custom console, navigation system and homemade aluminium and walnut steering wheel with a BMX rider doing a back flip off the centre. The final touch was a reverse camera monitoring system. 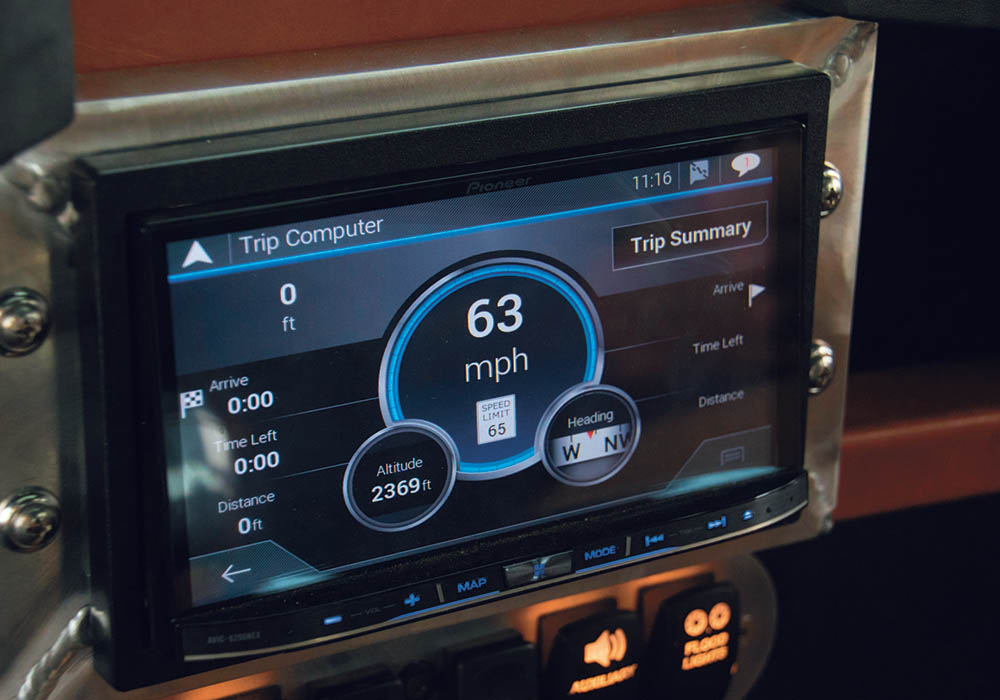 The navigation/audio system, which powers an array of 13 speakers throughout the cabin, is recessed in a custom aluminum cradle 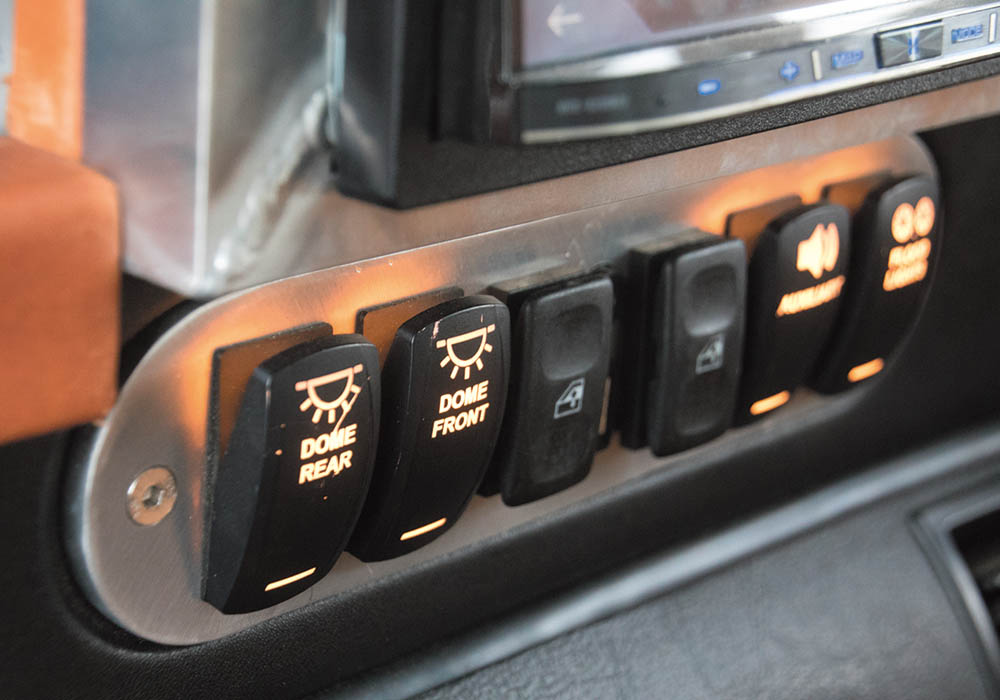 Auxiliary and interior lighting, along with the newly-installed electric rear windows are managed from a bank of toggles on the dash

Intending to spend many nights in the back country, Ron looked to Front Runner Outfitters for the appropriate equipment. He selected their roof top tent and Monsoon gear bag, mounting them on a full-length aluminium roof rack. Meanwhile, auxiliary LED driving lights were fitted to the OE bumper, while a diamond plate panel kit (chequer plate to you and me) and rock sliders from Rovers North protects vulnerable body parts. 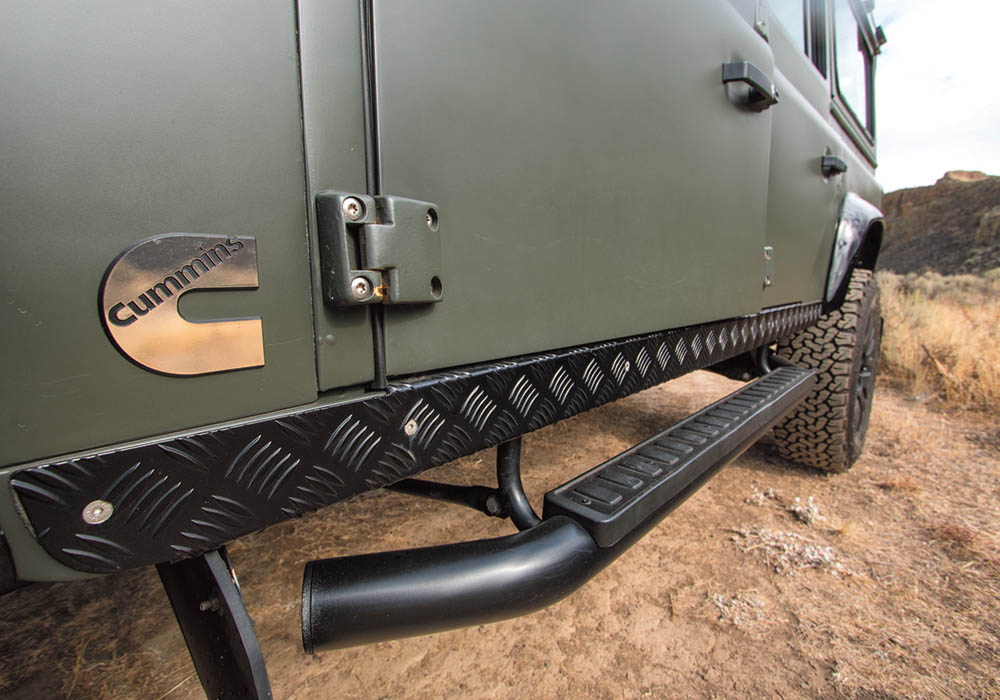 With the interior buttoned up, the future looked bright until the clutch went south during a road trip across Michigan. He figured that while half the drivetrain was removed, he should revisit the idea of updating the engine, so a call to Cummins was made and an order put in for that aforementioned engine.

The coolest thing about the R2.8 Cummins engine is that it includes most components to make it run: pumps, alternator, wiring harness, Murphy gauge, and even a drive-by-wire accelerator pedal.

You just need to add a battery, plumb the exhaust, cooling and wiring and presto! Right?

The challenge, however, was that few R2.8 conversions had been completed, and none in a Defender with an LT77 manual transmission. Not only were there no YouTube tutorials available, aftermarket manufacturers had yet to develop a transmission adapter, engine mounts or any of the other bits and pieces required.

Additionally, Ron had little experience as a mechanic and this would be his first engine swap. The repower adventure had begun.

After prying the crate open and sourcing an engine stand, he took detailed measurements of the bellhousing interface, flywheel and pilot bearing, frame rails and critical engine dimensions. The next task was to purchase 6061 billet aluminium plate in a variety of thicknesses and dimensions. During the next three weeks, his patience and fabrication skills would be tapped extensively.

Emerging from his machining man-cave, he had a custom-milled transmission adapter, flywheel attachment, slave cylinder mount and engine mounts in-hand. When the day of reckoning arrived, everything lined up and bolted together with the precision of a military marching band. 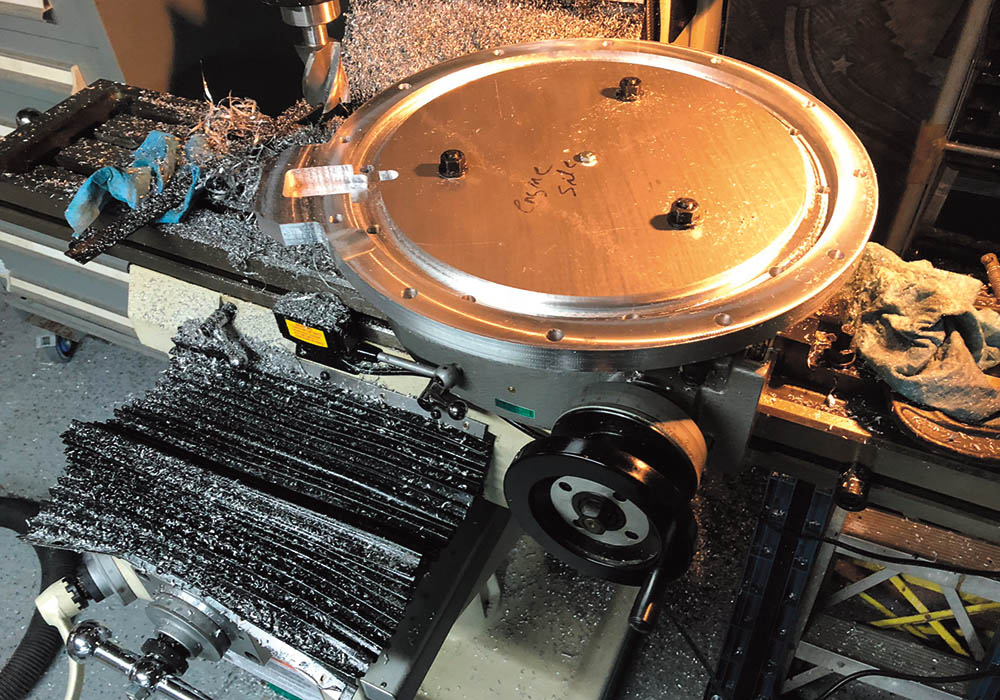 As a hobby machinist, owner Ron Thomas was able to mill crucial parts such as transmission, flywheel, and pilot bearing adapters

With the R2.8 sitting happily in the engine bay, the wiring harness and throttle pedal were integrated into the dash and footwell, and a custom exhaust was fabricated. A Summit Racing radiator and intercooler were installed via a mix of stainless and aluminium plumbing. Air supply was also custom, short of the Specter filter, and a second radiator was mounted under the bumper behind a new skid plate. 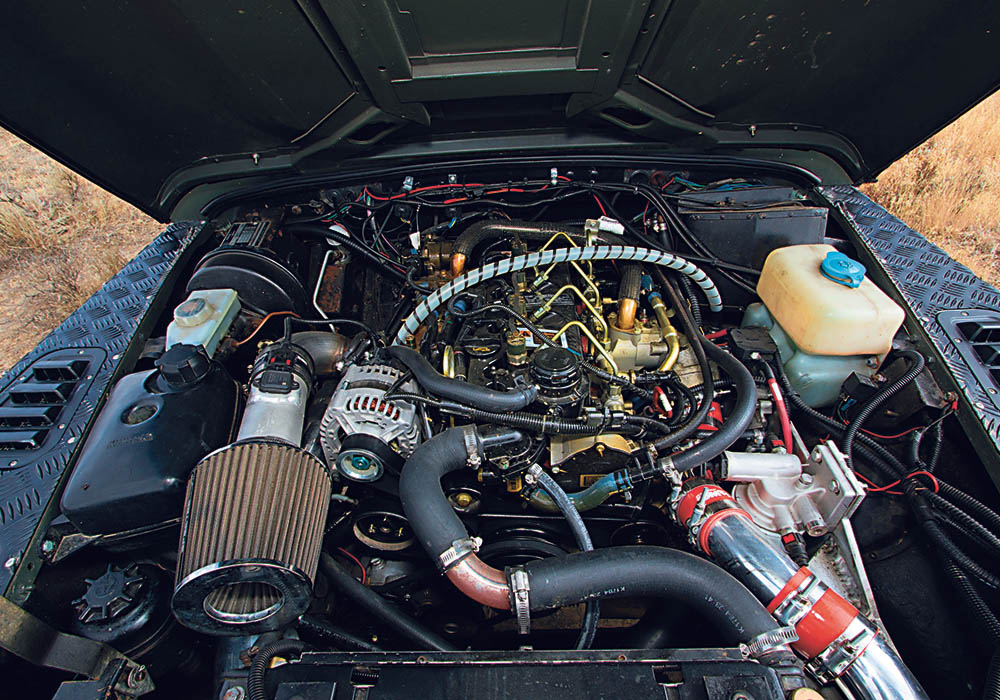 After three weeks in the shop, the One Ten emerged repowered by a Cummins R2.8 turbodiesel. The 161 hp and 310 lb-ft torque it generates is a significant improvement over the original 200Tdi

After ten months of playing in his garage, three weeks of that just on the heart transplant, the Landy was repowered and ready for a proper evaluation.

We caught up with Ron and his wife Samantha on the Cummins Repower Cruise across America’s Pacific Northwest. They said they loved the new interior, camping in the roof tent, and the additional power and grunt the new engine provided on long hill climbs.

No trucker apologies were needed on even steep inclines, and they were averaging 16-18 mpg. By the time they returned home to Detroit they had spun 4200 miles on the odometer. We’d say that’s not a bad test run. Long may they enjoy it. 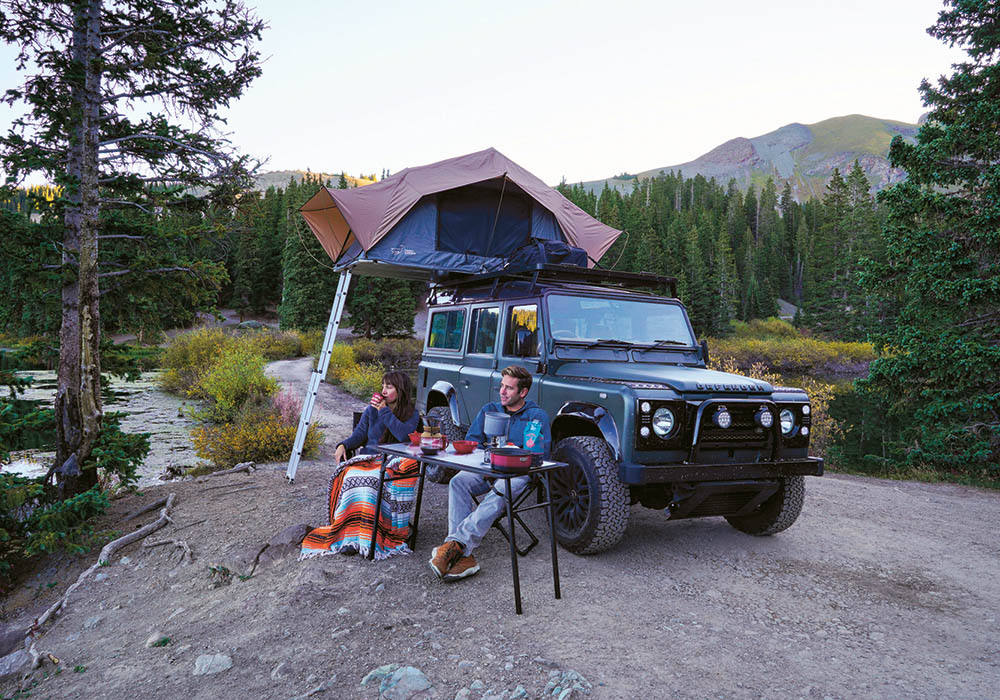 With the Cummins R2.8 transplant completed, Ron and his wife Samantha took a 4200 mile test run across the country