When the oil light comes on, it’s time to switch off and diagnose. Alisdair Cusick shows how to find the causes

Whichever Land Rover you own, it will feature one warning light that we all have to pay attention to: an illuminated oil pressure light means we should stop the engine because it suggests there isn’t sufficient engine oil pressure. Low oil pressure means insufficient lubrication, and no engine will run for long without the friction-easing vital fluid being pumped around its moving parts at the correct pressure and flow rate.

The oil light is operated by a pressure switch attached to the oil circuit. When the ignition is turned on, an ignition feed is sent to one side of the warning light bulb. The other feed comes from the pressure switch mounted on the engine and is grounded to vehicle earth. As soon as the pressure drops below a specified threshold, the switch makes the circuit and sends an earth feed to the warning bulb. That is why, when we start up, the light comes on as a system check; the ignition sends power to the bulb holder, and because there is no oil pressure the switch sends a feed, illuminating the light. On cranking the engine, enough pressure builds, and the switch opens, cutting the earth feed, so the light goes out.

The important thing here is, if you suspect you have an oil pressure problem, never just run the engine to diagnose it because, if there really is no pressure, it can cause severe damage to the engine.

The most accurate way to check oil pressure is to measure it by fitting a gauge in place of the pressure switch (or in addition using a T-piece) and running the engine to get a reading. That way, if you see low pressure you will instantly know if the problem is mechanical. But the electrical circuit can also cause issues, and this is the easiest place to start.

I’m showing this work on my Series I because the simplicity of this vehicle makes it easy to follow what we’re doing. The basic workflow of diagnostics comes into play, simply checking each part of the system in turn, and confirming each is doing what it should.

Here, the oil pressure light worked on start-up but, after a run, would either illuminate with the ignition, then flicker off, or simply just fail to illuminate. If the light doesn’t come on with ignition, something is wrong. With the engine sounding great in the immediate period before shutting off, I suspected an electrical issue. Here’s how I diagnosed it, using a simple workflow. 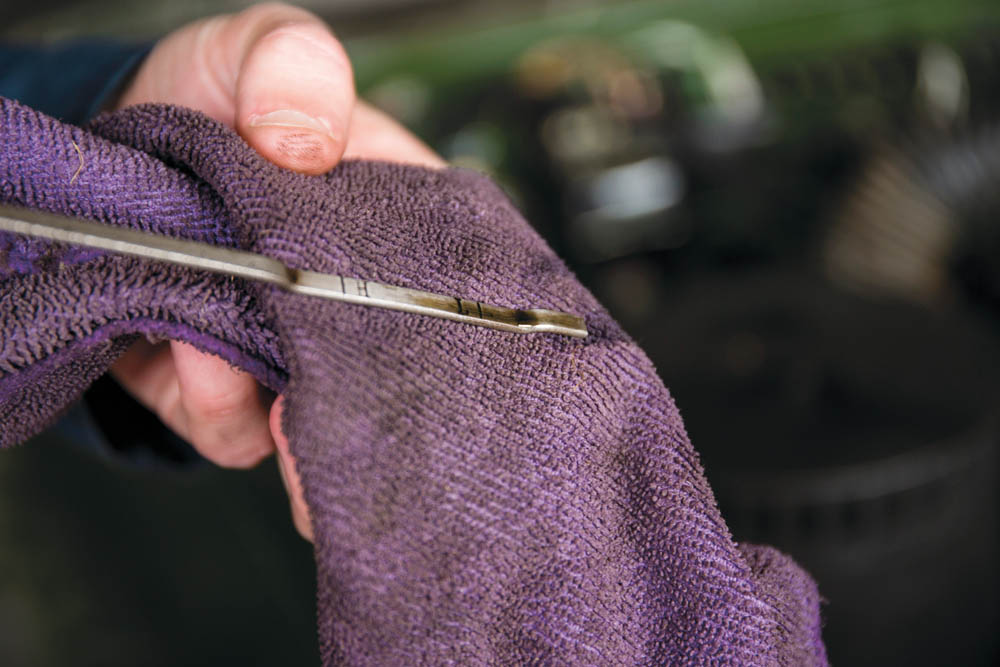 1. No oil, no pressure: The oil pump needs to be drawing oil to build pressure, so start with the basics. Check the dipstick, top up to maximum and check the light again. 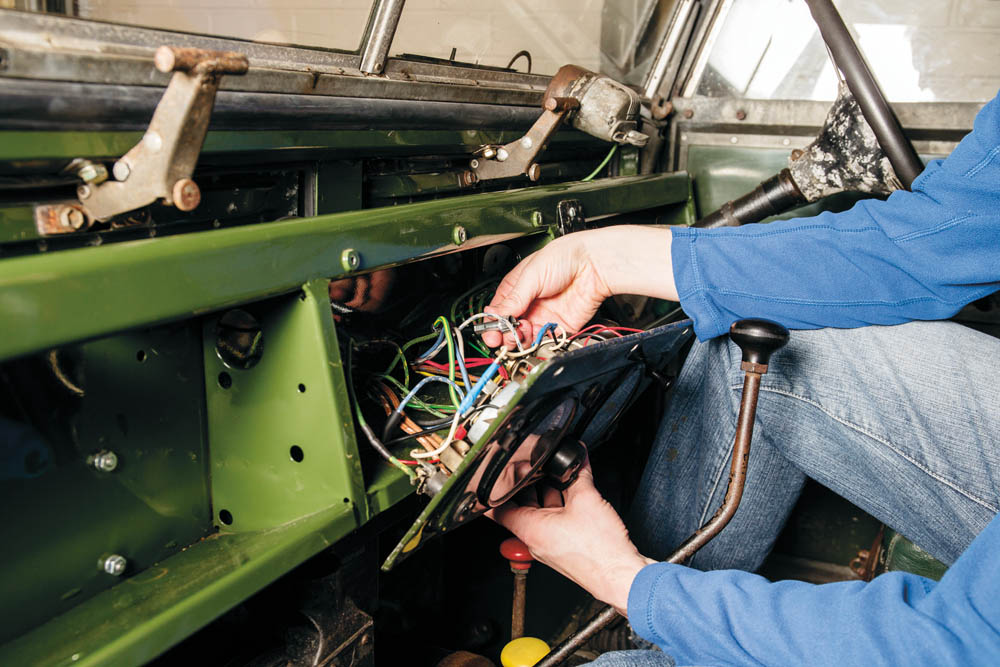 2. Bulb check: Next, check if the bulb has blown. I’m taking the dash out as we need to get to the bulb holder contacts next. 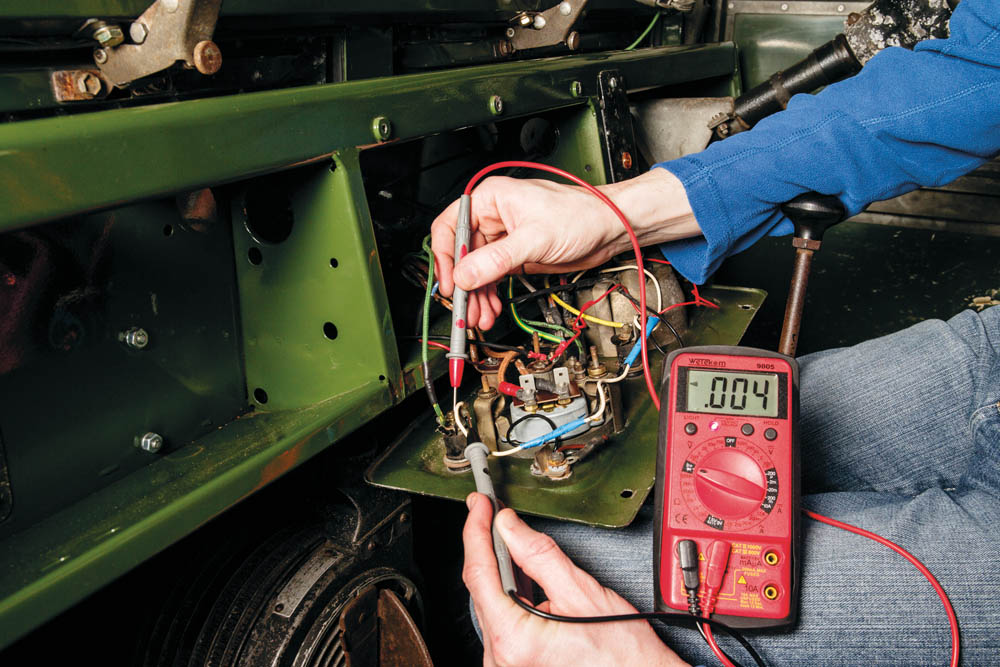 3. Measure once: Using a multimeter, check for continuity across the bulb holder contacts.
Take care not to cause a short anywhere in other wiring. 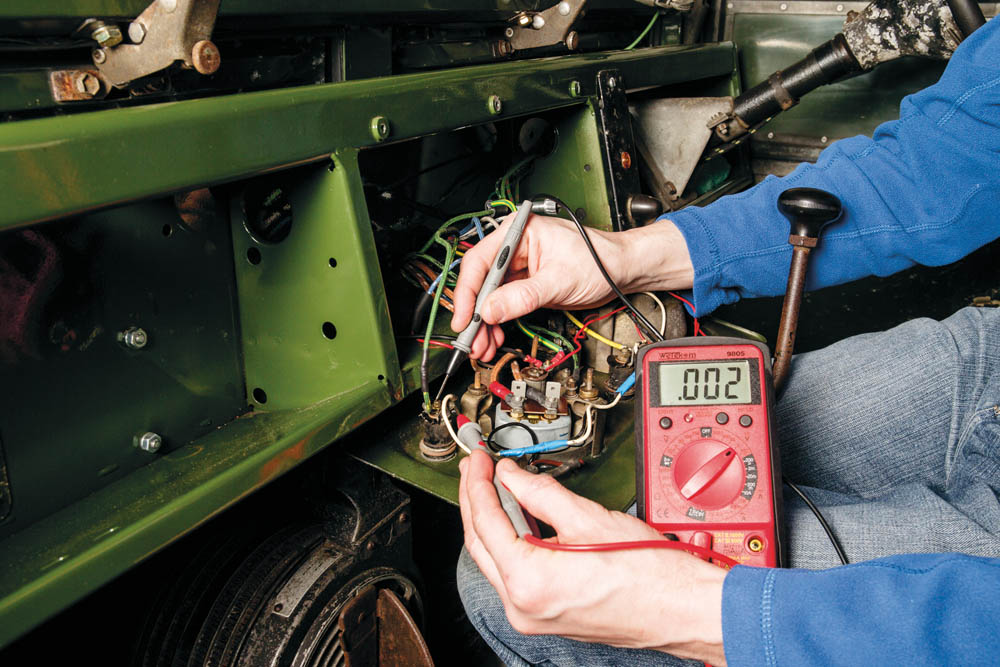 4. Measure twice: Set the meter to measure 12 volts Direct Current (a solid line with dotted line underneath), and look for 12 volts across the holder contacts with ignition on. 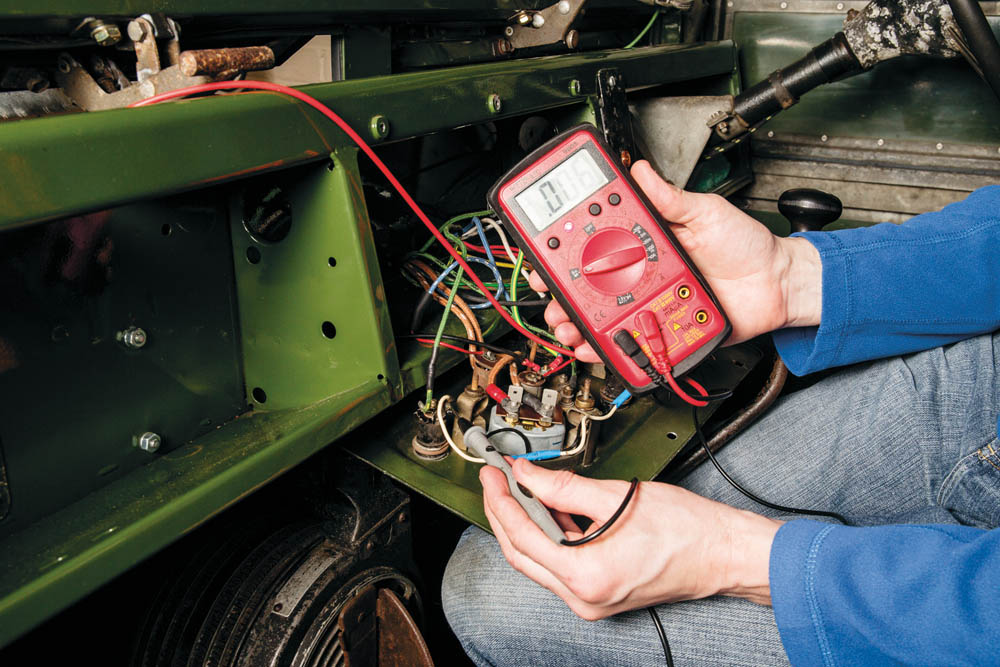 5. Broken wire?: Meter set to continuity, now confirm the wiring is okay between the bulb holder and the wire on the back of the oil pressure switch, under the bonnet. 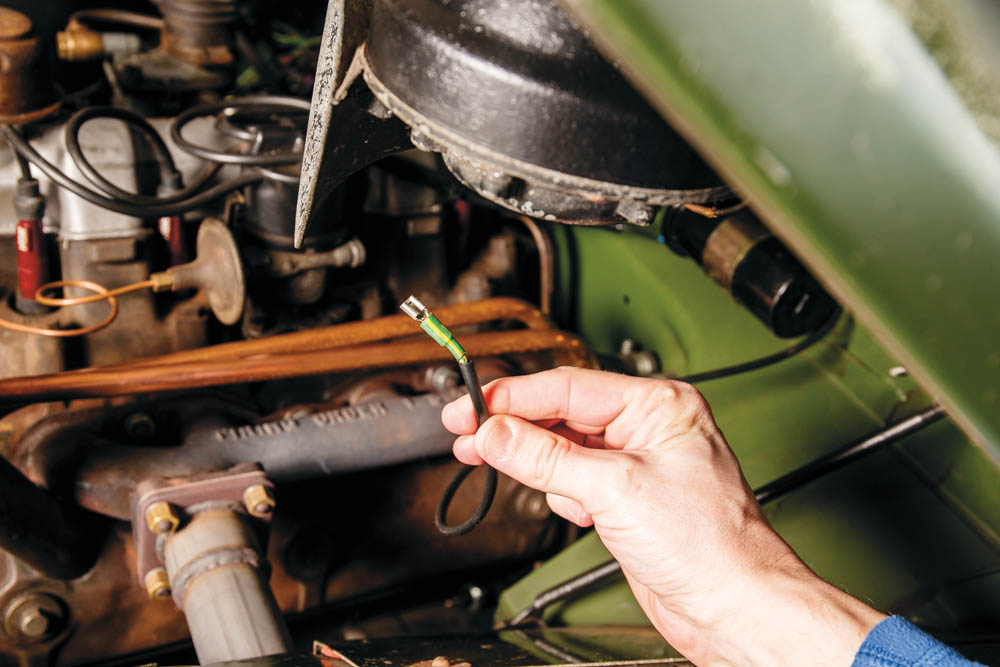 6. Earth calling: Take off the wire at the back of the pressure switch. If the oil light is still on when the ignition is on, you have an earth wiring issue. 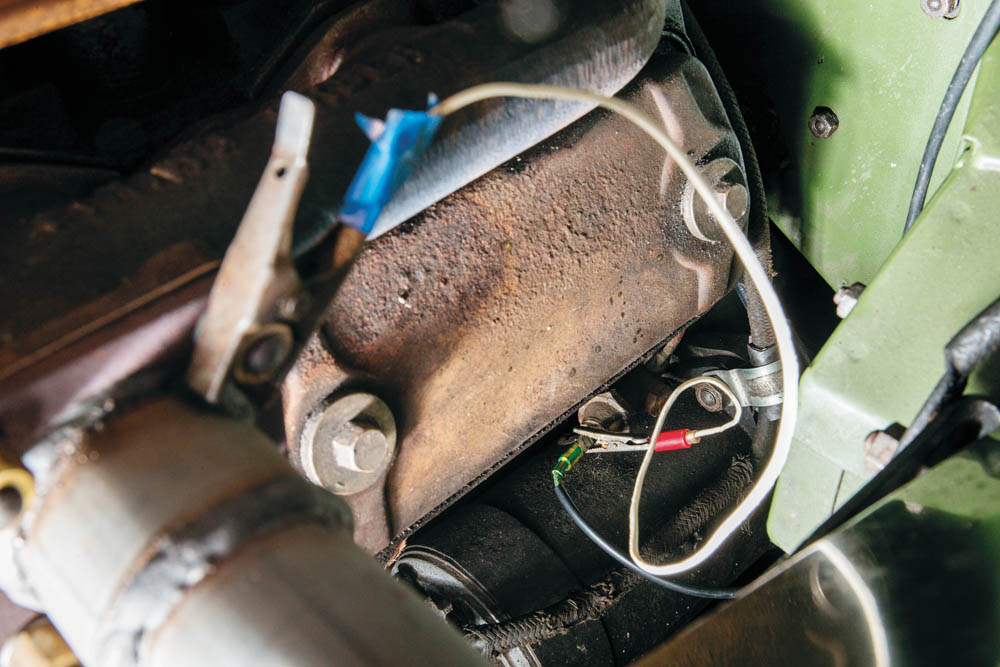 7. Beat the system: Connect a jumper wire between the back of the switch and the engine. If the light now comes on with ignition, you’ve confirmed the switch has failed. 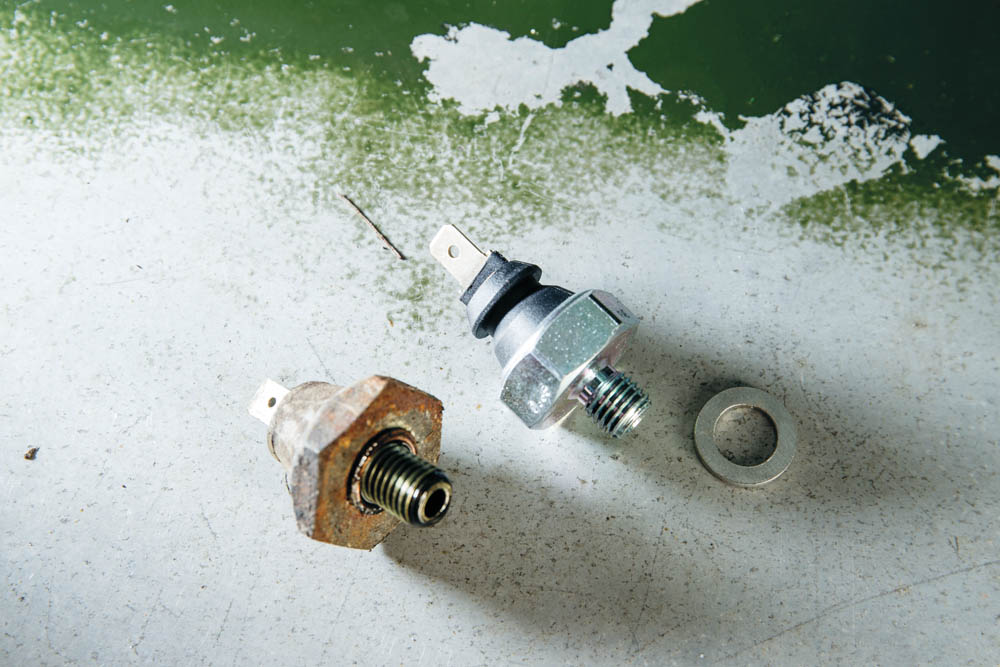 8. Check threads: Old and new pressure switches. Confirm correct thread as metric or imperial, likewise thread action, which can be parallel or tapered. 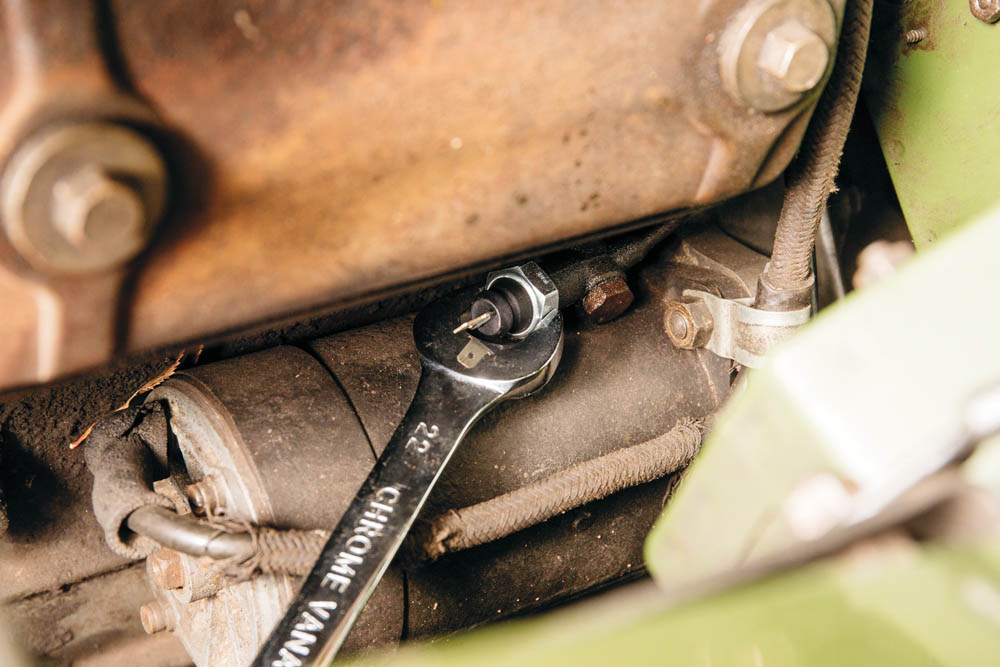 9. Mixing it up: Old part came off with Whitworth spanner. Perversely, new switch had 3/8” (straight) BSF thread but uses a 22 mm AF spanner to fit. 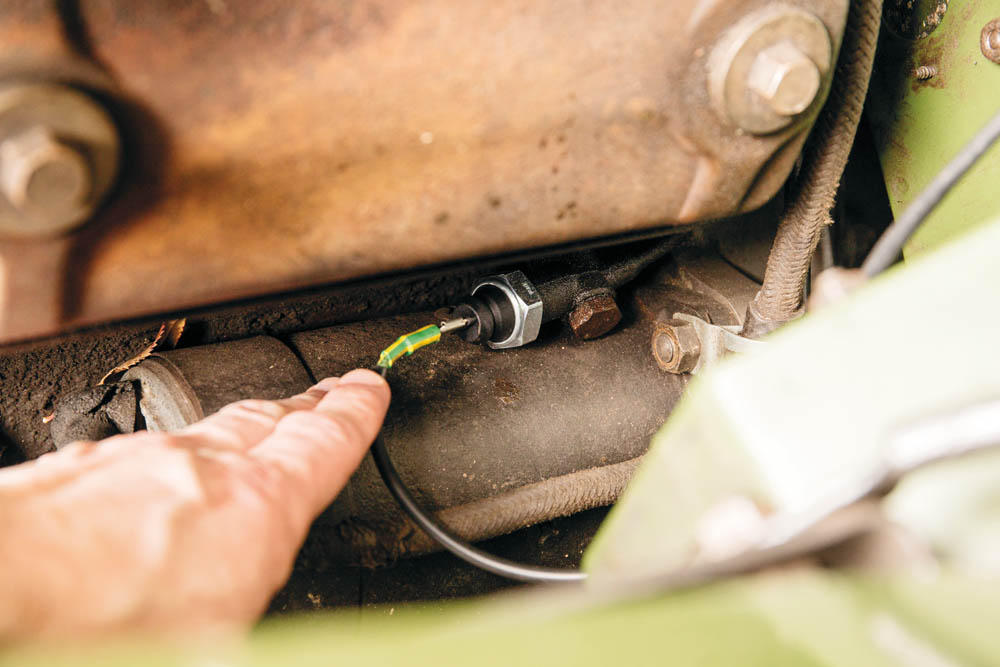 10. Refit feed wire: Refit the feed wire. Check cable routing to avoid hot exhaust, or chafing against anything sharp, which will cause an earth short. 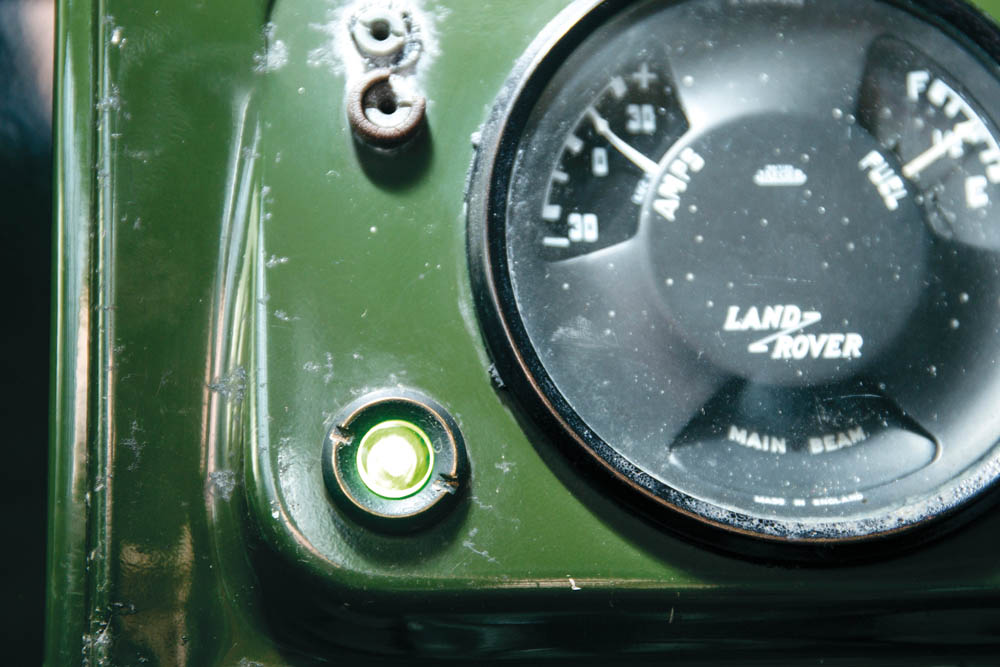 11. Ta-da: One fully functioning oil pressure light. Start the car and it should go out. You’ve now confirmed the electrical side is all okay.

What if you still have problems?

If you’ve followed our flow chart and the electrical circuit is given the all-clear, your problems are narrowed down to being mechanical. The light will be coming on with ignition as it should, but flickering or even just coming on with a running engine. Using a pressure gauge on a running engine is the way to check for certain, but there are still some DIY checks you can do. Diagnostics now gets a bit engine-specific, but broadly, the suggestions stand true.

Firstly, it may just be a clogged oil filter, or poor quality one. Quality oil, of the correct grade, and the best filter you can source is the first job if you’re in doubt. Next, things get a bit more tricky. Remove the sump to look for a clogged oil pick up pipe. Clean the pick up pipe of crud (and clean the sump). Whilst you’re there, inspect the oil for any evidence of white metal, such as silver streaks. Bearings are made from white metal, so if you’re unsure, remove a bearing cap from the crankshaft whilst you have the sump off, and inspect.

Beyond that, it could be a failing oil pump, or simply a worn engine. Either way, if you’re not seeing any oil pressure, accurate internal examination is needed. Oil pressure works by resistance, which is created by tight tolerances between bearings and shafts. Wear in those items allows extra oil flow, reducing resistance, therefore pressure.