The Land Rovers assemble at Fort Grey before the convoy heads off towards a few of the island's green lanes : credit: © Ollie Stenning @stenningphotography.co.uk

When LRM’s clubs editor, Dave Barker, suggested featuring Guernsey Land Rover Club as Club of the Month, members were eager to promote its activities to enthusiasts on the island and further afield. After all, it was a rare opportunity to see many familiar faces again.

Guernsey being a relatively small island of 25 square miles, it was no easy task for the club to organise a 40-plus Land Rover convoy without causing mayhem, but soon afterwards on a Sunday morning they were meeting up on the slipway of the historic Fort Grey, on the island’s south coast. 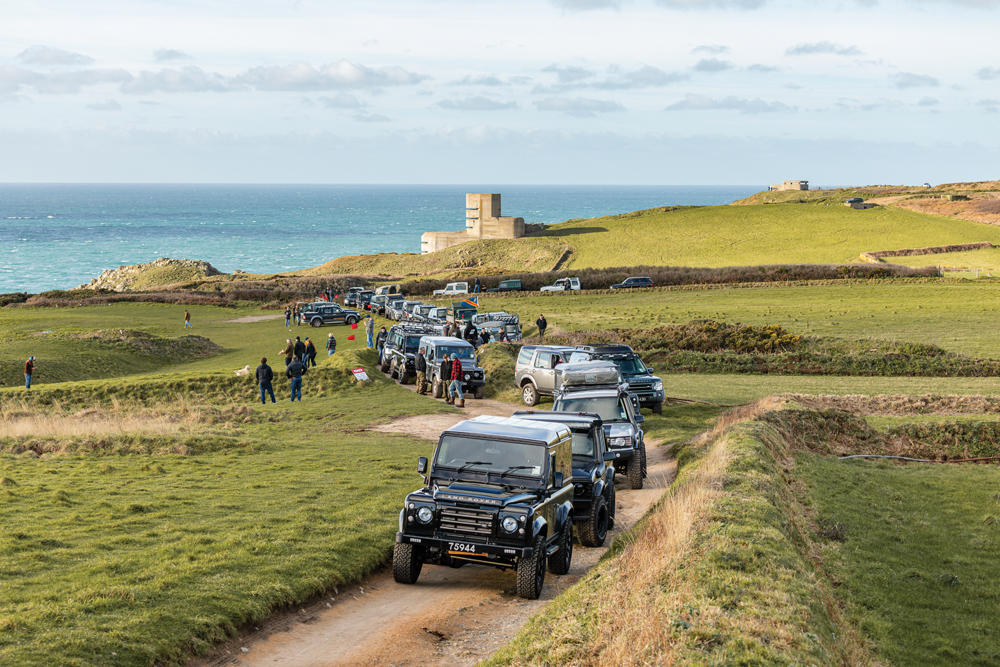 A wide and varied range of Land Rovers had gathered, including standard Defender 90 and 110s, Discoverys of all models and ages and even a Disco 1 pick-up. Range Rovers Classic two- and four-doors featured, as did a P38A and Range Rover Sports, while Series II and III (including a Lightweight) models were represented, too. This selection was a good representation of the Land Rovers to be found on Guernsey.

From the Fort, the convoy drove two miles to the Pleinmont headland, along one of the few greenlanes on the island before a photo stop at the infamous WW2 German naval observation tower. The convoy then headed for the club’s private off-road course, where members were keen to get muddy on the club’s first social off-road meeting of 2021, and photographer Ollie Stenning was on hand to capture the action. 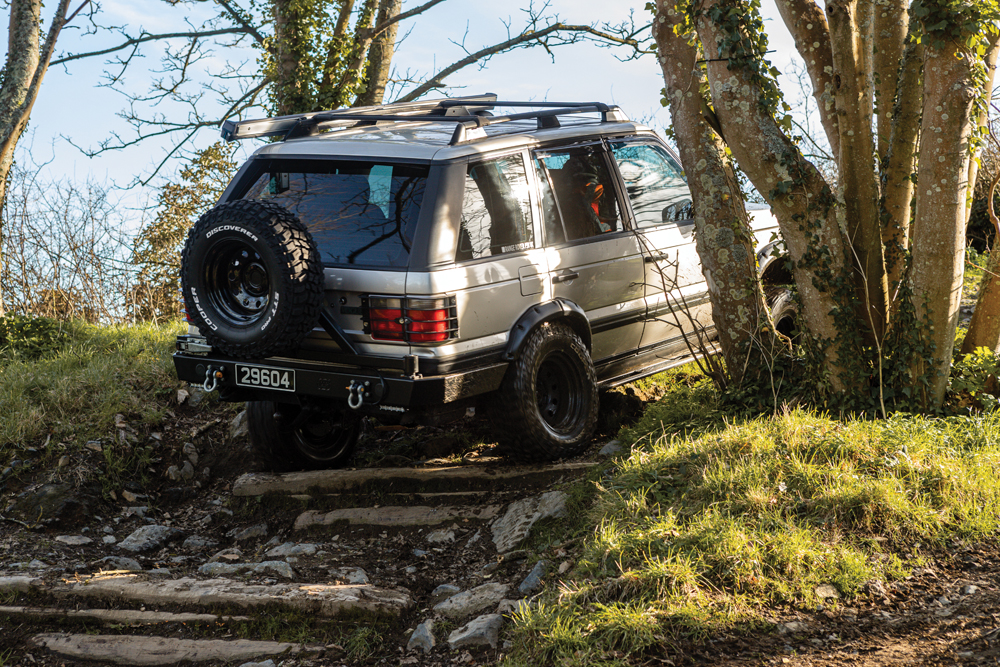 Owner Arnaud Lemoigne: I have a passion for Land Rovers and a real love affair for the P38A Range Rover. I have owned countless models over the past 18 years, from basic SE, Autobiography, ex-Metropolitan Police, manual V8 to Vogue spec – and all V8s, of course!

I acquired Frank back in June 2019, when it was advertised for spares or repair due to a head gasket failure. I decided to keep it on the road and the owner kindly gave me his pride and joy, which I still owe him a case of fine wine for.

A top-end engine rebuild was achieved on my driveway with the help of a close friend. I then decided to make it my ideal off-roader/overland vehicle. After carrying out extensive research on websites and forums, I soon realised this was going to be a challenging experience.

I started the modifications with a plus 2 inch shocks and springs kit, plus 2 inch Defender blocks and 265/75/16 tyres fitted to 8x16 ET32 offset steel wheels, in extended wheel arches. Extended panhard rods and bump stops were fitted as well (both custom made).

I then found a Polish company (MP Off-Road Service) who manufacture beautifully-designed P38A HD protection. They also supplied me with a front winch bumper, rear bumper and wheel carrier, tree sliders, fuel tank guard, shackles, and so on.

I felt the front end was looking bare, so I asked a close friend to custom build a bull bar, and also opted for a satin black vinyl wrap to the inner part of the bonnet. It now looks awesome!

In February 2020 I experienced a ten-day trip across the Yorkshire Moors, Dales and Lake District. Next trip on the agenda is driving across the Pyrenees (2022), but sadly due to Covid-19 we are yet to make concrete plans.

I hope this inspires other P38A owners with ambition to pursue their dream overland build. Frank is nowhere near perfect and is forever an ongoing project! 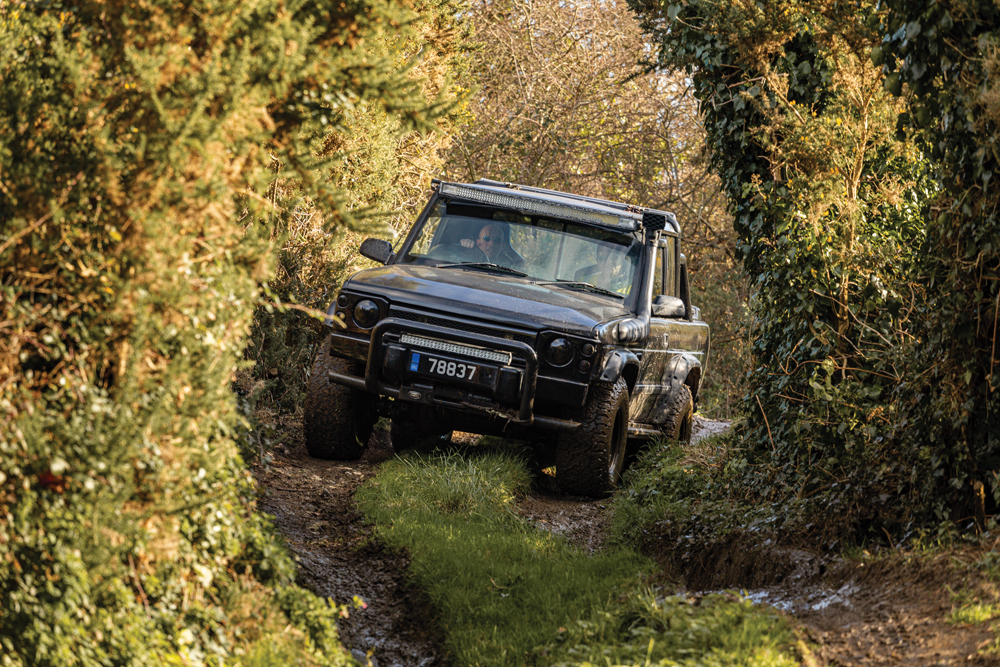 The  Disco 1 pick-up tackles the tracks with ease

Owner Mark Stonebridge (GLRC president): I’ve been into Land Rovers since tinkering with my grandfather’s Series III when I was five, then building my first V8 Hybrid at 16.

I bought this Disco 1 about eight years ago, it was a mint 300Tdi ES with all the optional extras from new. Mechanically it was sound with only about 100k, so the question was what to do with it. I saw an article about a Disco 1 pick up using a Longranger kit and Project Pepe was born

I wanted to build something functional, reliable and as corrosion resistant as possible. In April 2018 I invited some mechanically-minded friends over for a few days to celebrate my birthday and help.

After stripping everything down to the inner body it was clear a lot of repair work was needed. The decision was made to build a new frame for the rear, the rusty inner body was removed and the rear floor raised by 45 mm to accommodate a rear winch.

The frame was sent away for galvanising, while I started on the wiring. I wanted to go back to basics and remove anything not essential that could cause problems in the future, including ABS, airbags, electric seats, electric windows, alarm/immobilliser and central locking, to mention a few.

I also replaced the front inner wings, fitted a galvanised frame, fibreglass wings and pick-up bed made from 5 mm chequer plate, and welded in the rear bulkhead.

Corbeau reclining seats and Momo steering wheel were then added and lower seat mounts welded in, the steering column dropped by 10 mm, the handbrake repositioned between the seat and gearbox tunnel and a new handbrake mounting plate welded in.

Next job was to fabricate the bull bar, roll bar, light bar, rock sliders, bumpers and winch mounts. The rear winch is particularly useful when pulling boats and jet skis out of the water.

After a paint job just over a year, Pepe was taken for an engineering report and re-registered as a pick up. Since then, it has had a ARB rear locker, new gearboxes, engine rebuild, gas-flowed head, VGT Turbo, bigger intercooler and uprated fuel pump, as well as some cosmetic extras such as Disco 4 side vents, Defender headlights, carbon fibre cab floor, roller shutter/side rails from a Ford Ranger and a rear tailgate from an L200. 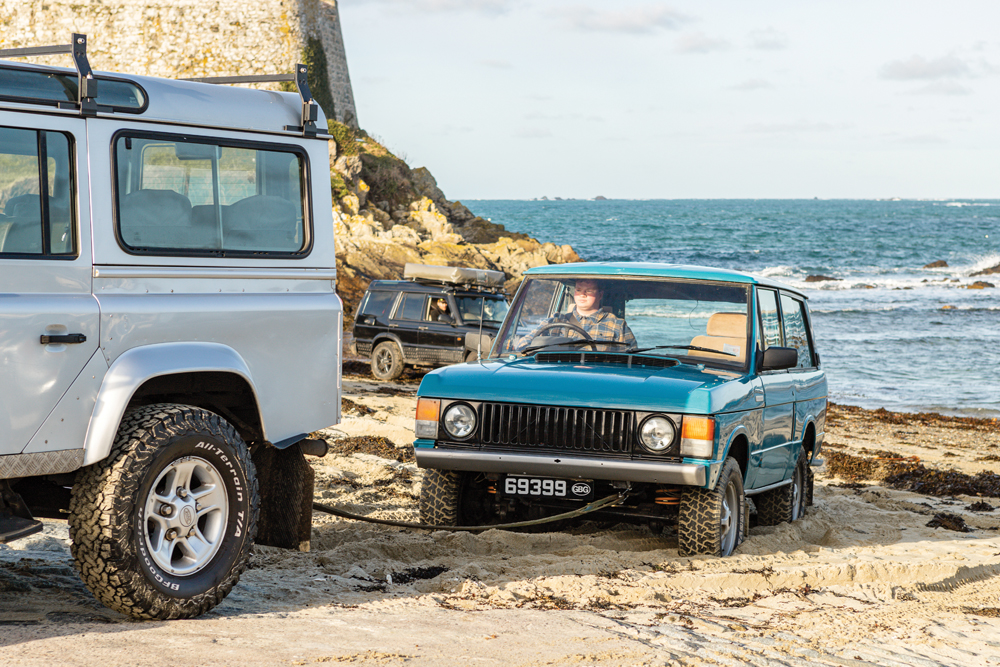 Robbie gets a helping hand off the beach

Owner Robbie Lucas:  I got into Land Rovers when I lived in Wiltshire and a friend invited me to go off-roading with him in his Range Rover. When I moved to Guernsey, I had a Defender, but decided I wanted a Range Rover like that first one back in Wiltshire.

I eventually found this one, which was the exact specification I wanted – standard and original, but could be used on and off- road. Apart from having front and rear fibreglass wings and aftermarket Ramair air filters, it’s very much standard.

My future plans for it include reinstalling the rest of the original interior. 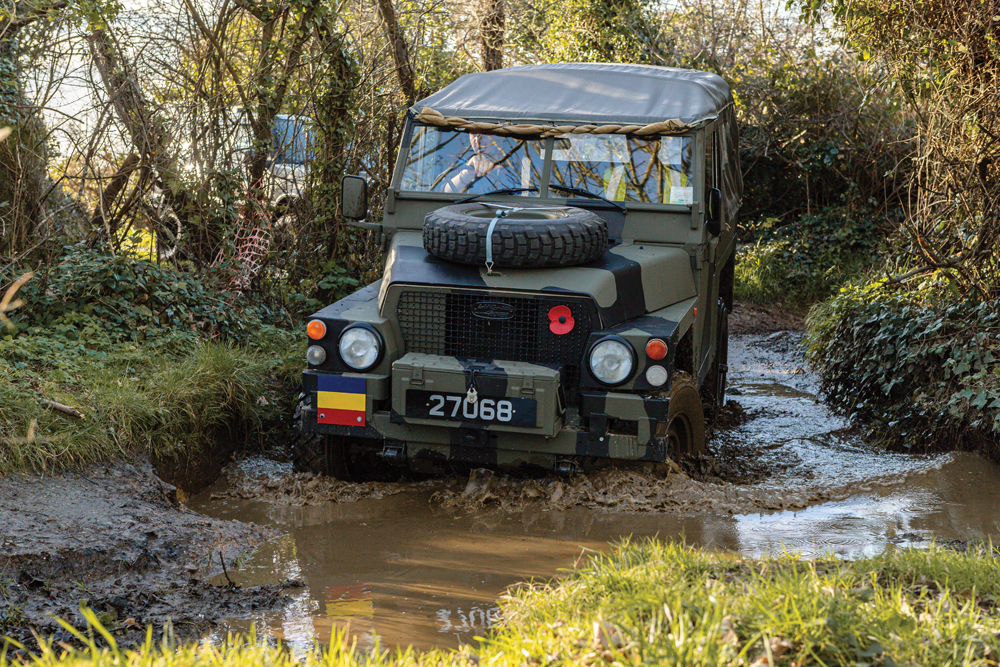 Camouflaged in the trees, this Lightweight seemed right at home

Owner Nathan Machon: 52HG25, was originally a 1978 Lightweight FFR (Fitted For Radio) 24 volt variant but it has at some point been converted to 12 volt and had all the radio equipment removed.

When I purchased the vehicle it was olive green, with Discovery steel wheels and a large amount of civilian switch gear and dash alterations. Since then it has a lot of these issues corrected including minor mechanical and electrical work and a full repaint in two-tone NATO IRR green and black – how it would have been in service.

There are still a few inaccuracies, however they will as time and money allow be corrected along with the reinstallation of some radio equipment.

The merlin records for this vehicle indicate it spent most of its time within the ownership of the Corps of The Royal Electrical Mechanical Engineers (REME) which is how it is displayed now. 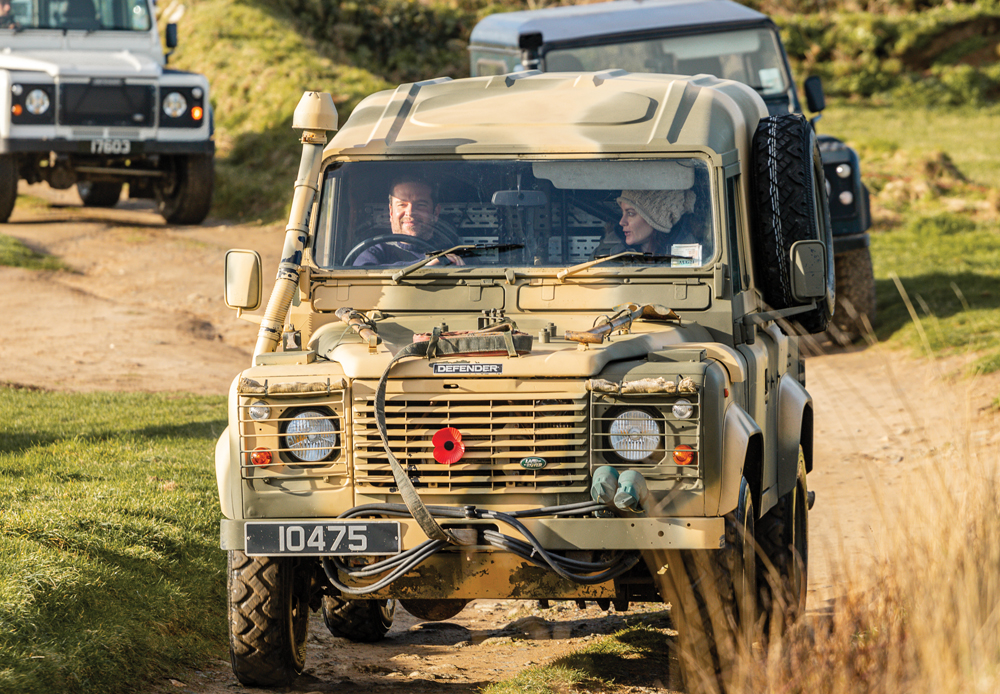 My Defender Wolf 90 (KA87AA) was originally a TUL (Truck Utility Light) soft top general service (GS). It was converted to a hard top for practicality and security; no other major changes have been done since being cast from service.

The vehicle is now in a two-tone NATO IRR green and sandstone paint scheme as used by the British Army in Canada, Cyprus and Kenya training areas.

There is little information on where this vehicle served but it is believed it was issued to the RAF during its time in service. I purchased it back in May 2014 as a soft top and it was used as a daily runner whilst doing a rolling restoration.

Today it depicts a late 2000s REME Flying Fitter wagon, which would allow REME tradesmen to quickly deploy to any breakdown or equipment failure location, thus allowing a rapid turnaround and getting the item back into the hands of the user as quickly as possible.

How I fell in love with Ken’s Landy 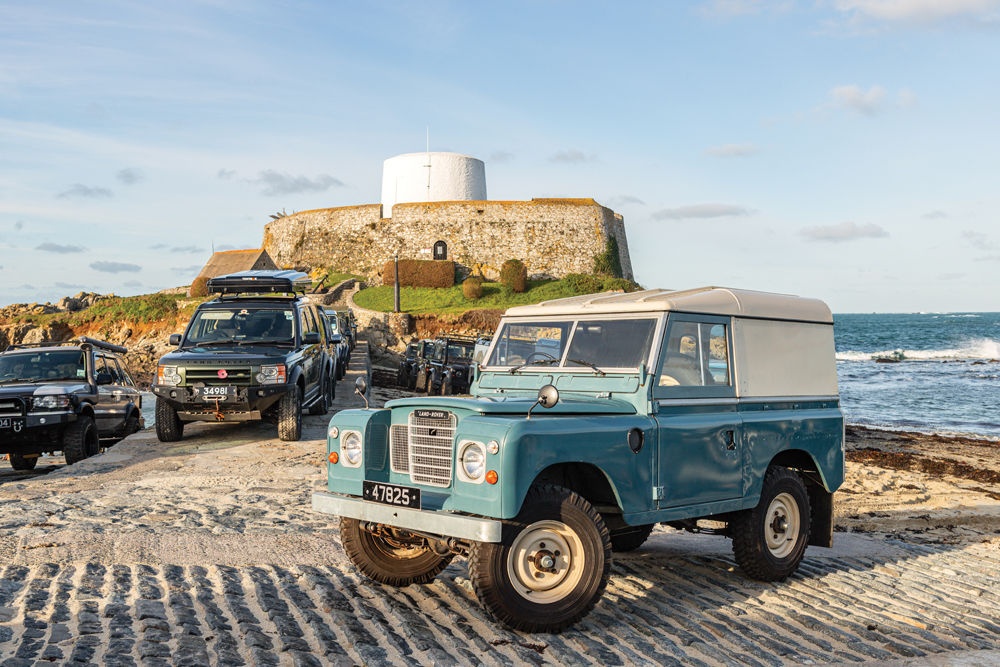 As a child growing up, I have fond memories of a family friend, Ken, driving his beautifully-kept Series III, which was the genesis of my love of Land Rovers. Some years later he offered to sell me the SIII, knowing my attachment to it.

I was just 17 and still learning to drive and unfortunately at that point in my life,
it was not to be and I turned down the chance – something I always regretted.

In 2005, we were fortunate to be able to use Ken’s Landy as my wedding car. It had been polished specially for our big day and looked fantastic. However, shortly afterwards he sold it on.

Over the years I always wondered what became of this particular Series III, which soon turned into an obsession, with years of searching sale ads and the DVLA website. Then, after 15 years, in February 2020 I discovered a recent advert from a Land Rover specialist in North Yorkshire who had recently sold the Series to a lovely chap called Rick. Following many conversations with the owner and some lengthy negotiations, I somehow convinced Rick to sell Ken’s Landy to me.

After waiting several months due to the lockdown and Covid-19 restrictions, I finally had the Land Rover shipped over to Guernsey. I was like a small child at Christmas when it arrived, certainly a special moment to be reacquainted with Ken’s Landy and it still looked just as immaculate as I fondly remembered it. It is standard and original and my future plans for it are to treasure it and hopefully use it to teach my daughters to drive and – who knows – one day even use it as their wedding car, too. 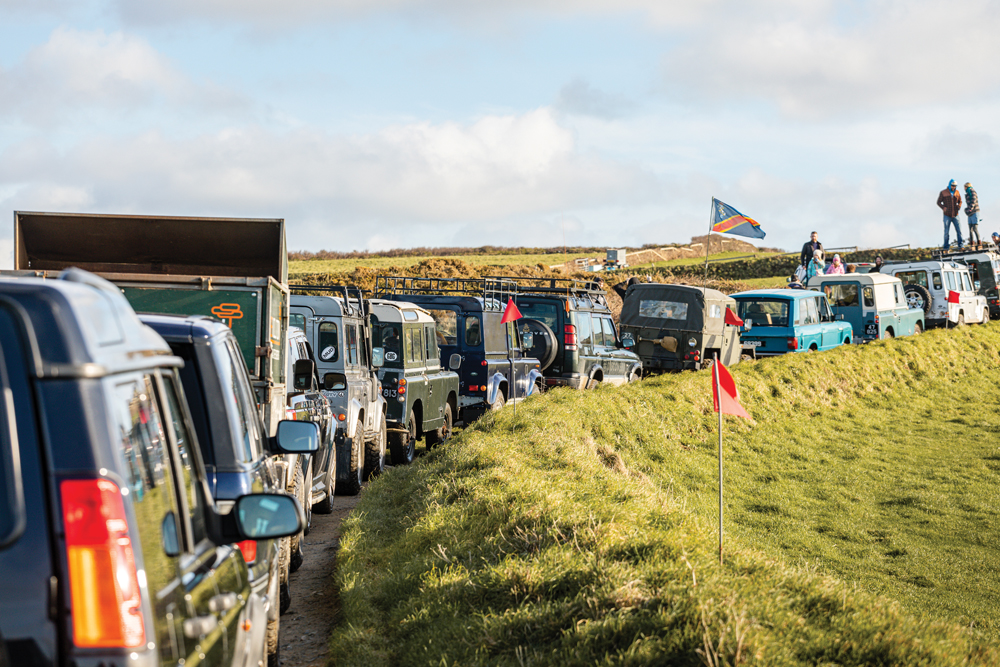 The club was formed in 1998 when the local Land Rover garage organised a drive around the island to celebrate Land Rover's 50th anniversary. Over the next ten years, the club grew rapidly. At that time there were five off-road sites on Guernsey, but with the increased demand for building on the island, off-roading became more difficult. The club currently has around 50 members and two off-road sites.

The club also tries to do its bit for the island, by helping to collect litter from beaches, planting trees and driving essential workers during snow and icy conditions. It also supports a local charity that helps people with learning difficulties.