The Landy Man of Glastonbury He might be an award-winning farmer and the creator of the Glastonbury Festival, but Michael Eavis is a Landy man through and through. In fact, he owns 30 of them. LRM Editor Patrick Cruywagen interviews the man behind the greatest musical festival in the world

The Landy Man of Glastonbury Images 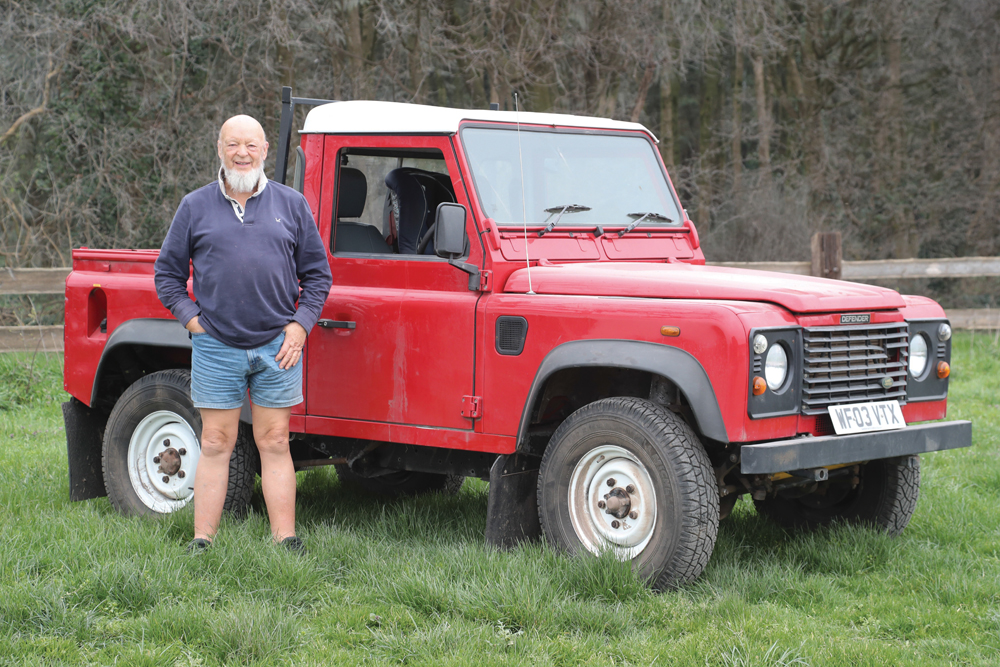 You join the Merchant Navy at just 15 years of age, and then lose your dad at 19, so you return from the seas to take over the family farm. Are you happy with how things turned out?

Well, yes, I am. While now it might look as if I didn’t put a foot wrong, that is not the case! It has not been easy, there have certainly been lots of ups and downs, but in the long term, everything has turned out okay. 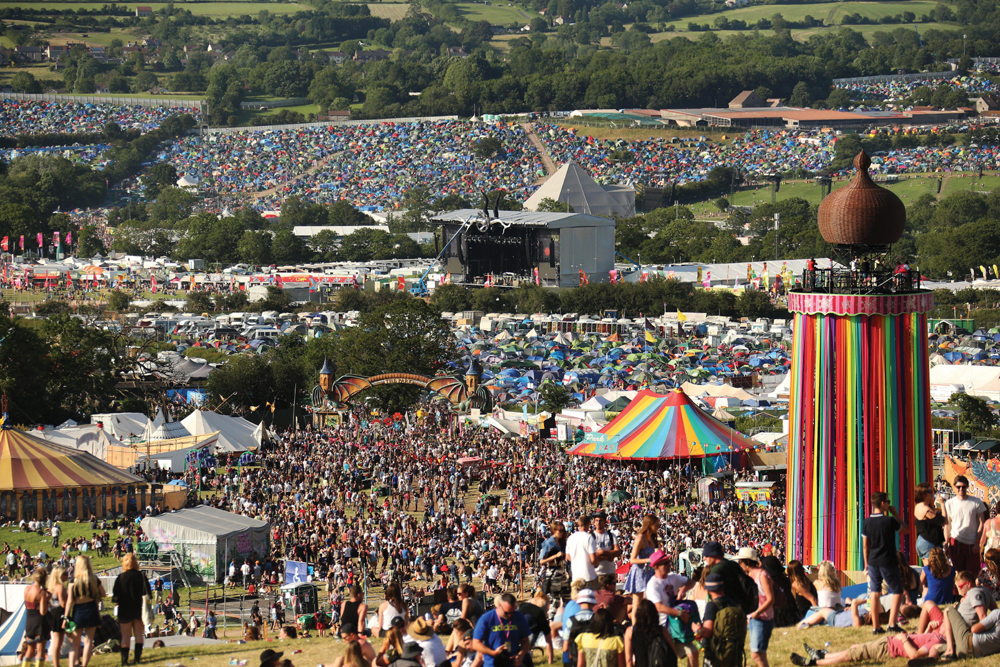 You lose money when hosting the first (1970 and 1971) music events on the farm. Then in 1979 you decide to give it a proper go. Peter Gabriel and most of Genesis are set to play. You need cash and take out a £15k loan and give the title deeds of the farm to a bank manager in Bristol. Was this the biggest risk you ever took in your life?

Yes, I think that it was the craziest thing I ever done in my life, actually. I could have lost everything but I wanted to give it a proper go, because I knew we had something that was going to work.

I really could have lost the farm in 1979, the whole shooting match. I saw the bank manager who lent me the money the other day, actually. He tried to talk me out of it at the time as he had to get authority from Bristol because it was such a lot of money. He said: “You’re absolutely crazy, there’s no future in what you’re doing. Just stay with the cows and what you know you can do.” He’s about 99 now I think and he said to me, “Michael, I’m so ashamed of myself. I had no faith in you, did I?” 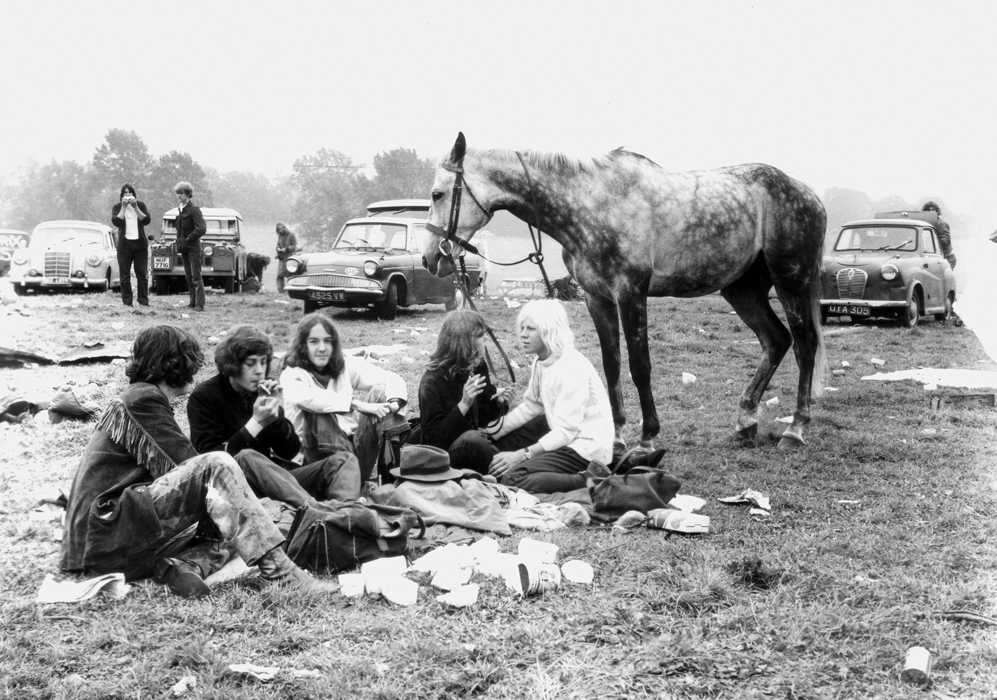 On page 18 and 19 of your book Glastonbury 50 there is a double page spread picture of the first festival taken by Brian Walker. There are some people smoking in the foreground, and a horse with some old cars behind them, including a Land Rover Series IIA [see opposite]. What goes through your mind when you see an old image like this? Some very unusual people turn up in those early days. But I found them quite attractive. They made me laugh and it kept me interested. Bear in mind that I was going down to the Taunton market every Sunday morning before then, so it was a total change of clientele for me, really! But I did enjoy those people.

I found it so refreshing. I think that’s what kept me going, actually. I do miss some of those people, but a lot of them are still coming to the Festival and are working for us. People like Joe Rush, who helps us put on one hell of a show. He arrived with the so-called peace convoy which was sent down from Stonehenge in 1985. The police actually brought them along to me, and I got to know and like them. So I’ve got to thank the police for that, really! 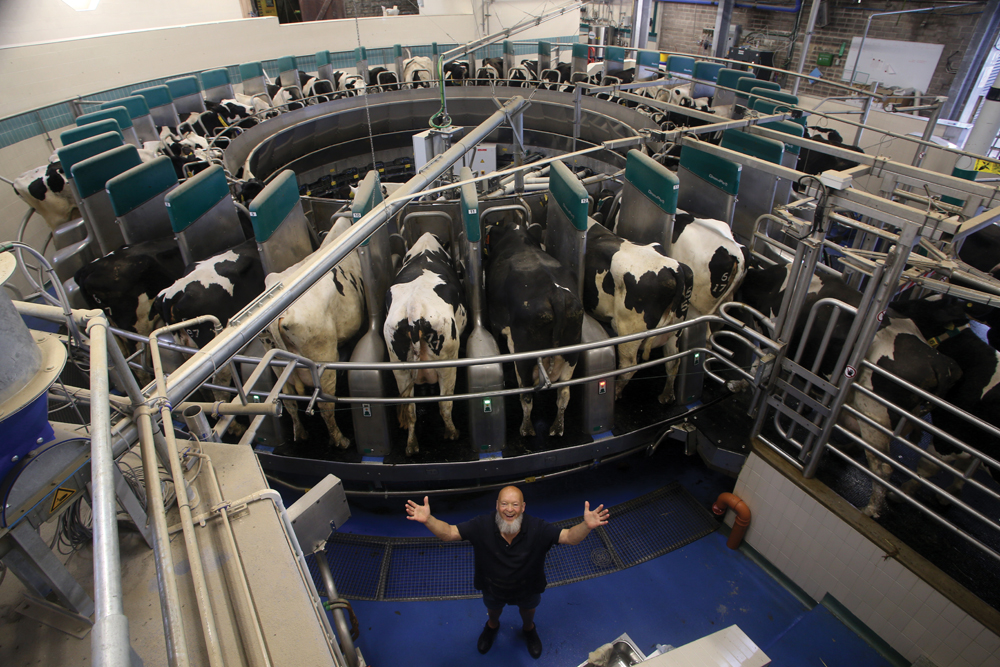 Worthy Farm is at its heart a large-scale dairy unit

Farmers and Land Rovers have always enjoyed a great relationship. Do you remember your first Land Rover experience?

I purchased my first Land Rover in 1975 for only £150. I think I was the third owner. It was a truck and I used it to pull vehicles out of the mud at Tor Fair in Glastonbury. I charged them a fiver a go, and do you know, the fivers very quickly paid for that old Land Rover!

What role do Land Rovers currently play on your farm? How many do you own now?

We’ve got 30 of them, you know, which is quite a lot. We use them for the Festival. It’s actually cheaper to buy them for around £2500 each than hire them in every year, because if you hire them from a Land Rover company, you’ve got to pay for every scratch and every mark.

The farm managers both have one each, and I’ve got a Defender 90 V8 which is a bit fancy, really. It is a 50th Anniversary Edition. There were only 400 made, and I’ve got number 300. It uses quite a lot of petrol, so I only use it for special occasions. It’s very fancy and attractive. People often ask me where I got it from, but you can’t get them any more. 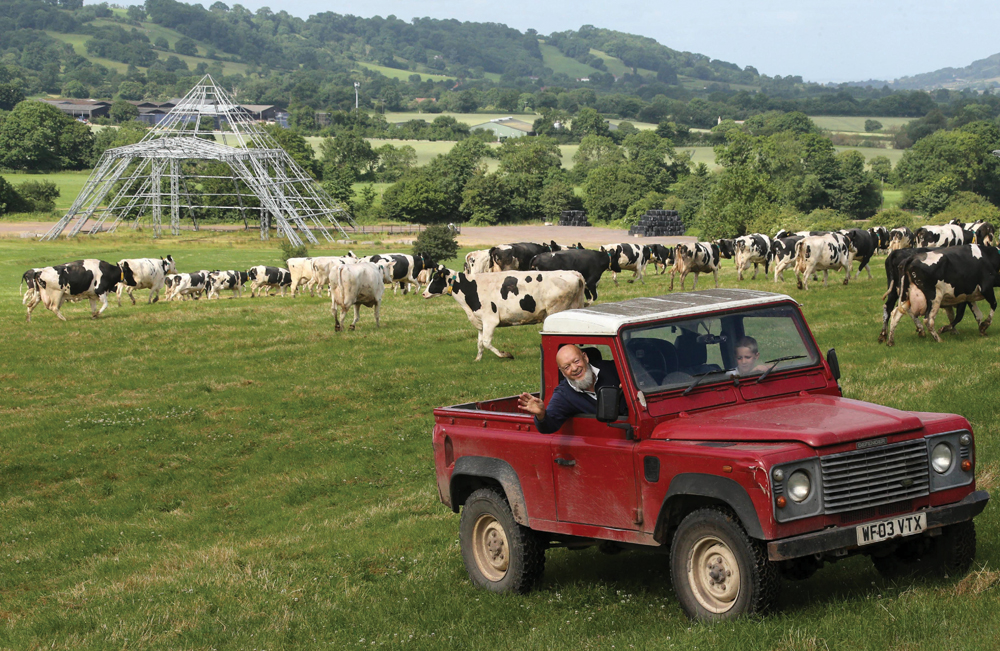 Michael checks that the cows are not on the pyramid stage

Land Rovers are very well built and you never ever get stuck in them because of the 4WD system of course. Although I took Chris Martin [from Coldplay] around the farm about four or five years ago, and we got a bit stuck. I got Chris to push me from behind and he got absolutely plastered in mud, thanks to the fast-spinning tyres! He did manage to get me out though and I do think he enjoyed it. Land Rovers are a part of our life here on Worthy Farm.

In November last year the Somerset Daily announced that you are converting four old Defenders to fully electric ones. These conversions are not cheap. How important is it to you to try and run a festival with net zero carbon emissions?

It would be lovely if we could, wouldn’t it? They’re converting an automatic electric one for me right now. I think that in about 20 years from now we’ll be all-electric, which is just marvellous.

A week ago Jaguar Land Rover announced they will produce six new all-electric models in the next five years. In the future you could be transporting the performers in an all-electric Defender to the Pyramid stage…

Well, I do hope so. Although I reckon we can only afford one of them!

Your red Defender 90 pick up is pretty famous at the Festival. You must have some stories to tell of stars who have been given a lift in it? 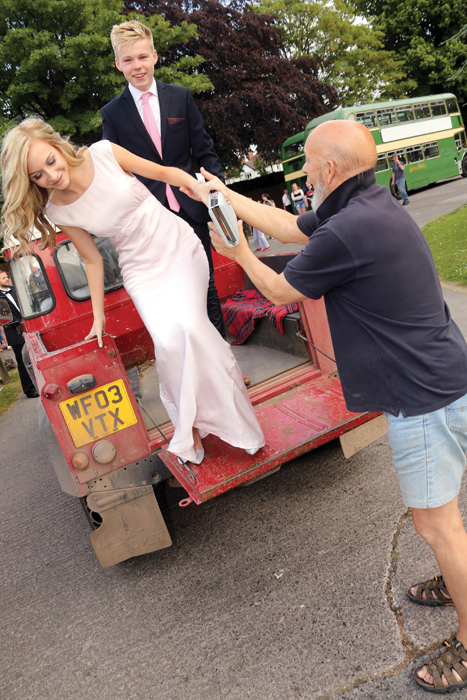 Mia Hiscox, 16, who's been to 13 festivals, was driven to her school prom in Michael's 90 over

In 2014 you took Mia Hiscox to her school prom in you red 90 pick-up. At the time Mia had already been to 13 Glastonbury Festivals. There must have been some pretty fancy cars dropping the other kids off?

How did you know about that? I do remember it. She really wanted me to come with the red Land Rover, not the posh one. Other people had hired Bentleys and all sorts of fancy cars, and I turned up in this old Land Rover. It made for good pictures. I was really pleased to do it. 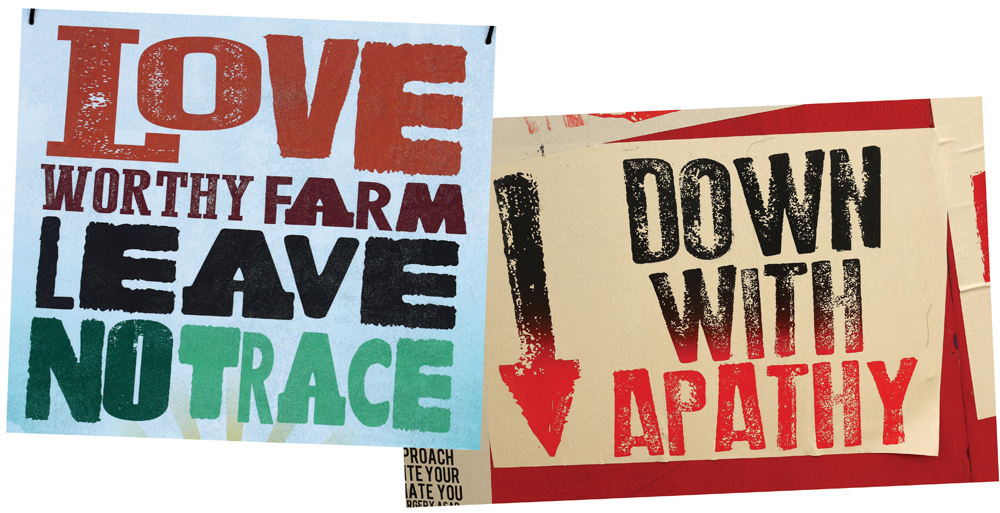 The thing I admire about you the most Michael is that the Festival is about so much more than music, the social housing project in Pilton and the opportunities you have given performers from disadvantaged backgrounds, are just two of the positives to come out of what you do. This must give you an incredible amount of satisfaction and pride?

It does. Particularly the social housing. That was the great dream of mine to provide that. Because council houses were sold off in 1979 and through the 1980s – blame Maggie Thatcher for that – and no more were built, so there was no council housing in the village. People who couldn’t afford to buy a house had to leave to live in Shepton or elsewhere, and we lost all the working people that the village needs to make it tick.

So I really wanted to recreate a situation whereby the working people could actually live in this village at a very low cost, with reasonable rent and not having to mortgage themselves up to the eyeballs. And so that’s what I’ve done. We’re doing another 23 houses hopefully this year, which will bring it up to 55 in total. It’s such a lovely thing to have been able to do. There’s plenty of land around and it can be done at reasonable cost. The government pay for the building of the houses, and we provide the stone from the farm, and don’t charge for the land. So the whole thing becomes feasible. 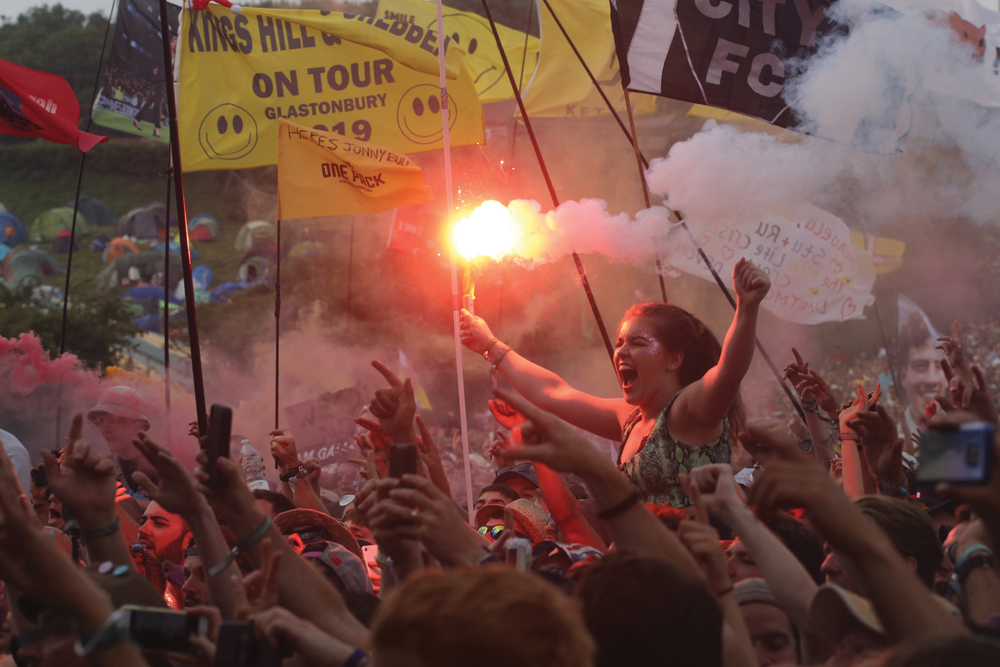 You are a very brave man getting on the stage and singing with Stevie Wonder and then later with Coldplay. What is it like being on the Pyramid Stage at a packed festival?

Well it’s okay but with Stevie Wonder I was singing the wrong tune. It was terrible. I was doing Happy Birthday with him at our 40th anniversary festival, but they did Stevie’s version and I was doing the traditional one. He did change the key for me during the song so that his band would fit in with what I was singing, bless his heart. And he gave me a lovely mouth organ afterwards as a present. He said he’d only given three of them away, and the other two went to Paul McCartney and Barack Obama! How about that!

Coldplay was much better, though. I sang that really well, I think. The crowd were rapturous. You don’t really see the people, though. You just see the darkness and the lights of their phones. 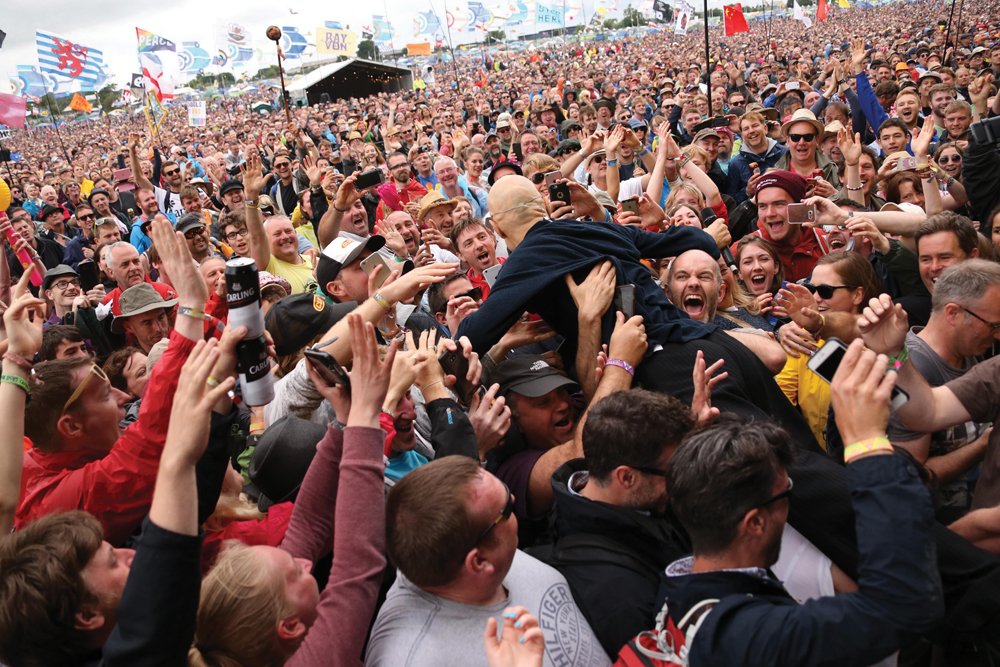 Yeah, I enjoyed his stuff at that time. That set in 1979 just captured the moment for me, really. It was absolutely brilliant. There are things every year that stand out, though. It goes on and on, and we’re not finished yet! 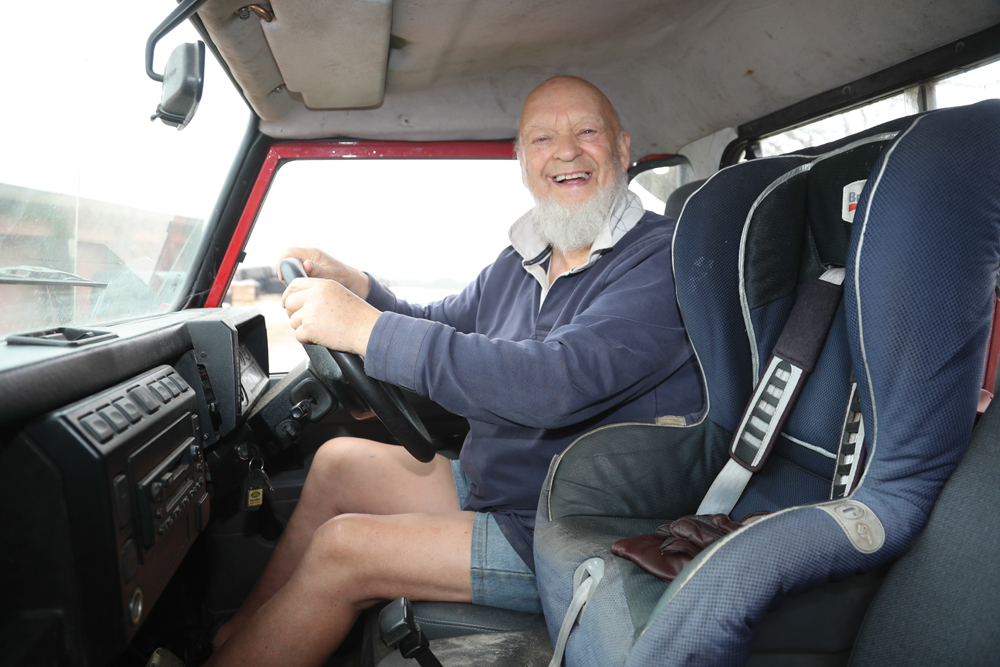 Final question: old Defender or new Defender? Or is the answer the Defender that is the kindest to our planet?

I haven’t seen the new Defender yet. I am looking forward to the all-electric one, I must say. We’re generating our own electricity on the farm now from the cows’ slurry with the biodigester and the solar panels. The cows are really doing the business with the milk for the cheese and the methane for the electricity.