The devil is in the detail A six-wheeled Range Rover pick-up... now that's not something you see everyday and it seems that nothing's been overlooked in Longranger's 4x4 carefully-executed project

I’ve met Clinton Trump before. Way back in 2008, I photographed and wrote about Longranger 4x4, the company he runs from a base of operations in rural Wiltshire.

During that visit I examined a number of fascinating creations, from the description-defying ‘Thing’, to the 156in wheelbase monster from which the company takes its name. I was shown the supreme off-road abilities of the Longranger snub-nosed, bob-tailed Discovery pick-ups, and remember getting well and truly soaked in the process of taking some of the more adventurous shots for the article.

So when Clinton invited me back to see a special build that they'd just completed, I jumped at the chance. Almost 12 years ago I found myself fascinated not only by Longranger’s attention to detail and commitment to the whole build process, but specifically by Clinton’s approach to design, which seemed to, somewhat bafflingly, satisfy both form and function in a uniquely elegant fashion.

A 6x4 Classic Range Rover ex-fire tender conversion, you say? This should be interesting. 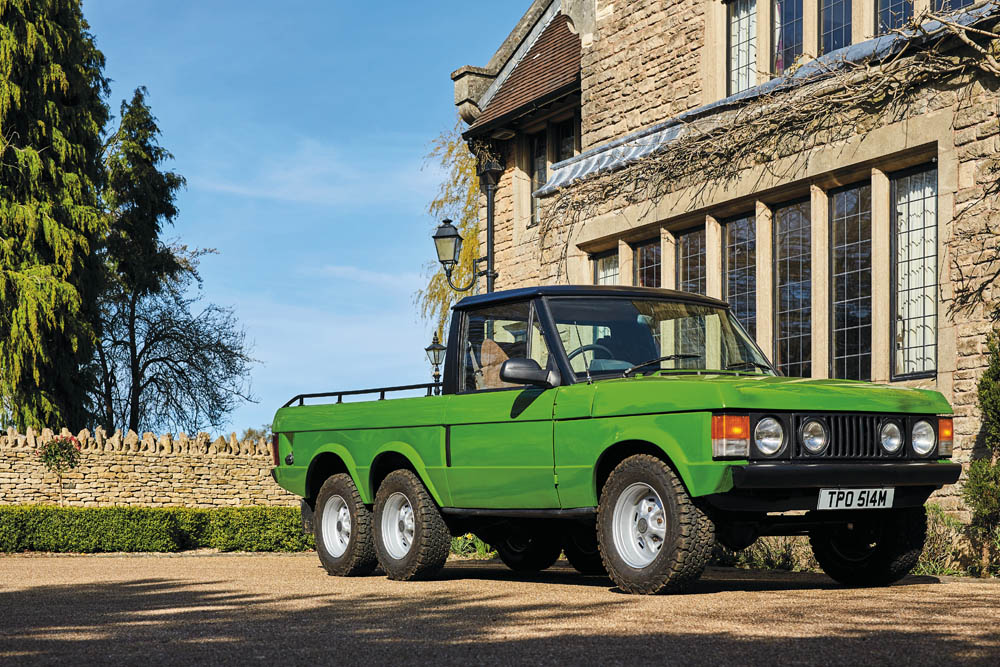 Parts have been updated where necessary, for example the Disco Td5 door mirrors

Before I’m shown the truck itself, Clinton explains a little about the reasons for the project, the provenance of the vehicle, and why he made some of the many design decisions which required consideration before and during the build.

It came from a client who had sourced it online, and having seen Longranger’s work, thought it an ideal fit for Clinton’s previous experience. Upon arrival it turned out to be bright red and fitted out as a fire-fighting unit for use specifically on airfields, and when I asked about its state upon arrival, Clinton, along with a sidelong glance, said ‘‘well, it ran’’, and after a pause, added, ‘‘just’’.

Further investigation revealed that the majority of the fire fighting kit had previously been stripped out, and the truck used as a builder’s van. Gone were the water tanks (originally built to hold a 1000 litres), the hoses, and various other fire-fighting paraphernalia, including the front-mounted water pump unit, which although not present, had left a sizeable hole in the bumper.

As I’d already established, the truck, although rather unconvincingly, did actually run, so my next question was the obvious one… 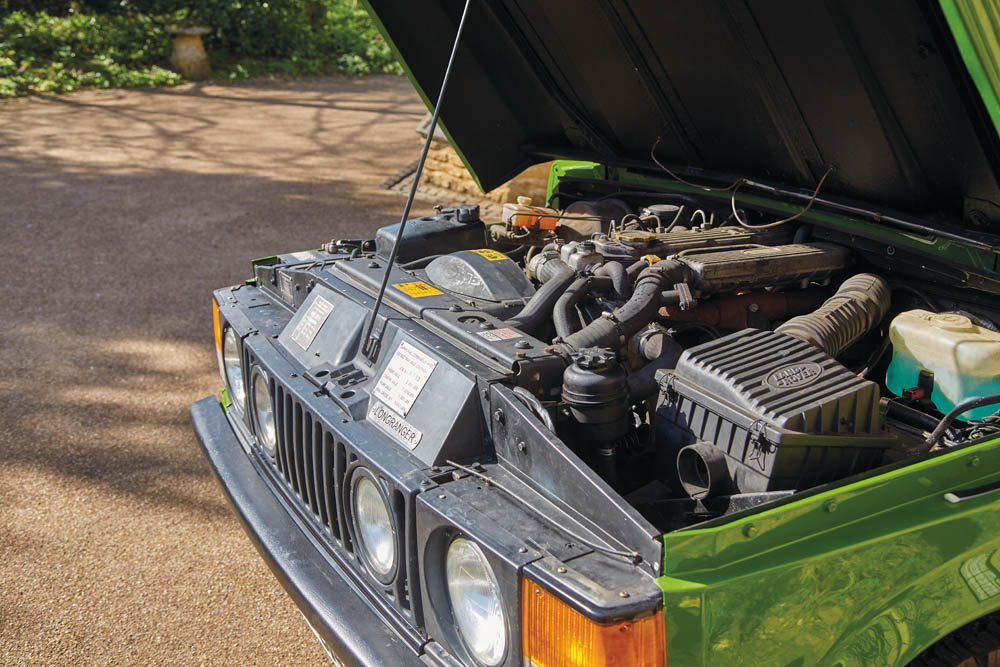 "No, definitely not the original engine,’’ was the reply. ‘‘It had a retrofitted 3.5 V8, cobbled to a gearbox that didn’t fit.’’

This actually turned out to be something of an understatement. The gearbox was so wrong, being an LT77 (and considerably different in size from the LT85 which would originally have been fitted) that the top had been hacked out of the transmission tunnel in order to make it fit, leaving a big chunk protruding into the cab.

‘‘There were Coke cans patching the exhaust, the transfer box was mis-matched and everything gave the impression of having been done in a hurry,’’ he adds. And all this was apparent before the truck was even on the ramps!

I’m beginning to understand the scale of the task that Clinton so gleefully undertook. He assures me, however, that it’s the problem vehicles that he finds most gratifying. ‘‘The more there is wrong to start with,’’ he explains, ‘‘the more potential there is to make improvements.’’

Granted. Although I’m not quite sure I’d share his enthusiasm if I were faced with such a daunting task.

So, with enough information for me to understand the basics of the build, it’s time to see the finished article. 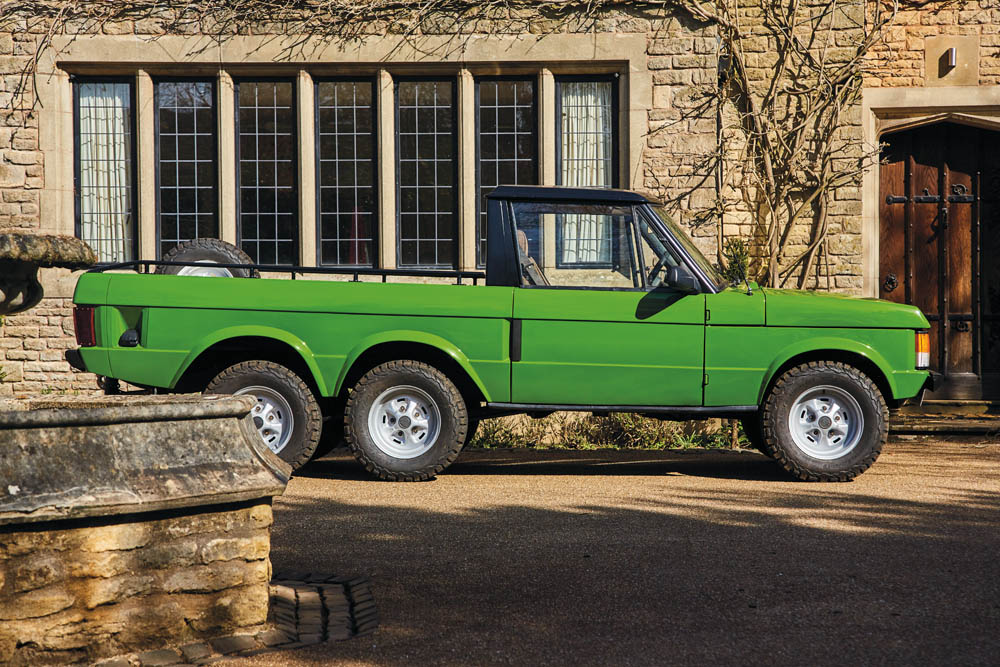 It certainly is a sight

It’s a bright, summery day, and having seen Clinton’s work before, I have no doubt that whatever I’m about to see, it won’t be boring. I’m not, however, quite prepared for the visual impact of the brilliant-green six-wheel beauty that emerges, gleaming, into the sun. It’s a Classic Range Rover, of that there’s no doubt. All those familiar lines are there, but so is a great deal more.

I was expecting a 6x4 and I’m well aware of what that inevitably means for the wheelbase and overall length (an additional 36 inches between the rear axles), but the size of the vehicle and its presence is still a surprise. Inevitably, perhaps, it’s similarity to the familiar Classic really highlights the parts which aren’t so recognisable. Most obviously, of course, the extra wheels, and the fact that it’s a pick-up.

Clinton had shown me an image of the truck as it had arrived at the workshop, and while it was clearly already a pretty unusual beast, it was a country mile from the final vehicle. I’d also been shown some images from an original brochure featuring comparably modified Rangies, and it dawned upon me, as I examined the truck, that this wasn’t just a conversion – it was a homage to those seventies Classic Range Rovers (or just Range Rovers, as they were known back then).

Most of the panels on this reborn version are clearly not the ones from the fire tender. The wheel arches are subtly more flared, the wheels a little deeper, and it wasn’t a pick-up until recently. 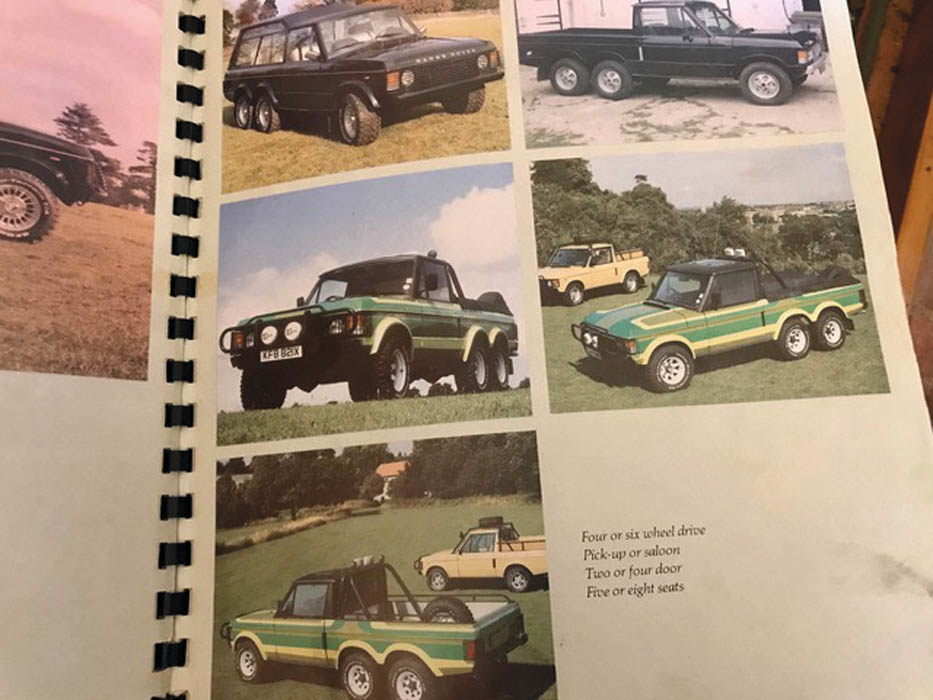 He shows me an original brochure which clearly features our vehicle (albeit arguably in a rather more ’70s colour-scheme). I mention as much, and Clinton rather smugly points out that the paint is in fact, Warwick Green, an original Range Rover factory hue from the era in which this vehicle first rolled off the production line.

While we’re on the subject of colour, Clinton tells me that, during the stripdown and evaluation process, he discovered no less than seven resprays, mostly red, but also including one of day-glow pink. Pretty sure it wasn’t factory spec during that particular stage of its history!

Back to the present, I wonder how Longranger created what so closely resembles the custom Range Rovers that Clinton had shown me in the Glenfrome brochure.

Clinton looks smug, once again. Turns out Longranger have a secret weapon. His name’s Paul, and he worked for Glenfrome at their peak. By good fortune, Clinton had, some time before Paul’s arrival, purchased the legacy moulds used by Glenfrome for the custom panelling required for the 6x4 design. Together with Paul’s previous experience, and on-site fabrication facilities, this means that accurately recreating the original components is possible entirely in-house. This allows Clinton, as he points out, to ‘‘quality control the whole process from start to finish’’.

That’s why it looks so authentic. It is authentic. This isn’t a copy, it’s a faithful, modern version of the 1970’s vehicles. 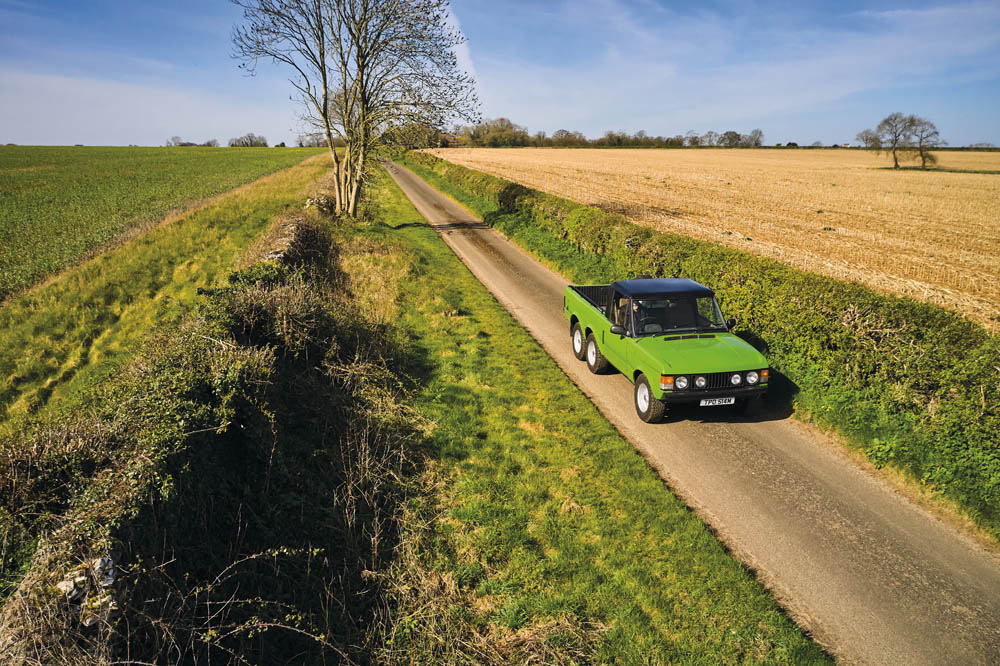 The Warwick Green paintwork, an original hue, glows in the sun

Looking at the finished article, it’s easy to see that Clinton hasn’t abused the power of a restorer. This shining, polished Range Rover could be from 1973, the original year of its registration. Incredible pains have been taken to keep the restoration and conversion true and in-keeping with the heritage offered by Carmichael, Glenfrome and the Range Rover marque.

Only close inspection reveals details that have been updated, where absolutely necessary. The door mirrors, for example, are from a Disco Td5, and the bed side rails have been created from scratch to reflect, but improve upon, the originals. It has central locking, no physical door locks, no badges and simple additional spotlights in the custom front grill. It all comes together to create clean, uncluttered lines and a very pleasing overall aesthetic.

The wheels (all seven of them), are bespoke. Original Range Rover Rostyles re-rimmed in-house with tubeless 7 inch rims to accommodate the 247/70/16s that perfectly fill the new wider arches.

Following our previous chat about the less-than-perfect engine/gearbox arrangement, I’m keen to know what Clinton used for powertrain in the final version. ‘‘It’s a 300Tdi paired with an R380 gearbox. The transmission tunnel is from a Disco to address the previous ‘hole with carpet over it’ solution, and the engine, while a power pin has been fitted to compensate for the additional weight, looks as standard as the day it was built. A deliberate move, Clinton tells me, and another nod towards authenticity. No blue hoses or polished chrome here. Which is refreshingly nice to see, and looks absolutely right under the bonnet of this retro-machine.

‘‘From the outset we wanted this to be a resto-rod project,’’ Clinton explains. ‘‘It is a classic vehicle, and we didn’t want to conceal that, but celebrate it. We’ve updated some elements, but tried very hard not to disrupt the overall feel of the original.’’ 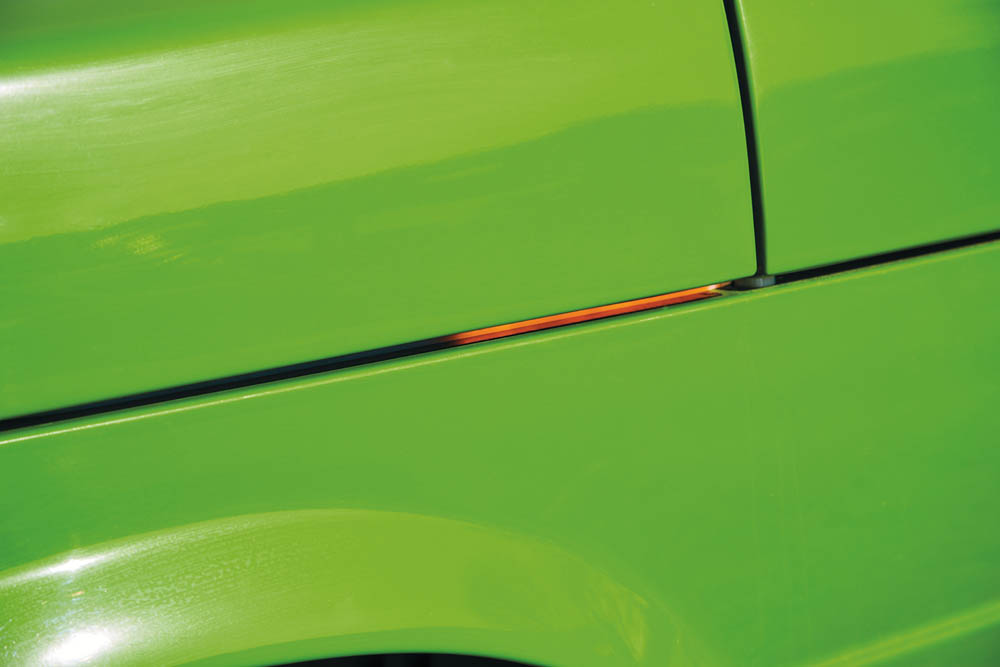 He gives the example of the concealed side indicators, completely absent from the original, but hidden cleverly between the bonnet and front wheel arches, and only visible when used. I hadn’t even noticed them, despite a pretty detailed initial examination, which is testament to the lengths Clinton has gone to in his pursuit of design purity.

I could talk for a good while longer about further aspects of this vehicle. I could mention, for example, the fibreglass cab (exterior and headlining) that is another Longranger bespoke product, or that the corner rear fibreglass light units are custom mouldings of classic Range Rover rear lights. The devil’s in the detail, and it seems nothing’s been overlooked in the planning and execution of this project.

It’s been a very interesting day, and what occurs to me, having spent some time with the Longranger 6x4, is that while a lot of clever, subtle and lovingly crafted elements come together in this vehicle, it’s the fact that most of them are sitting quietly behind the scenes that makes it special. Restoration is a balancing act, and in this case, carefully judged authenticity makes it a winner.

Following an early rebirth from Range Rover to fire tender, this phoenix has well and truly risen from the ashes of it’s previous existence. It is a thing of beauty and I, for one, absolutely love it.

Time for a History lesson…

The truck in question was originally converted from a standard Range Rover by coach-building firm Carmichael, into their Commando Firefighting vehicle, designed for use on airfields, and following their early seventies blueprints.

This intended deployment explains its 6x4 configuration; four-wheel drive was considered adequate due to an operating environment which consisted almost exclusively of level grass and tarmac.

And why six wheels? As mentioned previously, the original specification accommodated tanks capable of carrying a 1000 litre (or a metric tonne) payload. Add this non-static load to the inevitable hurry at which it was often required to work, and it isn’t difficult to see why the extra axle was a desirable inclusion. The rear body, made from heavy fire-resistant china-clay fibreglass also added a lot of extra weight.