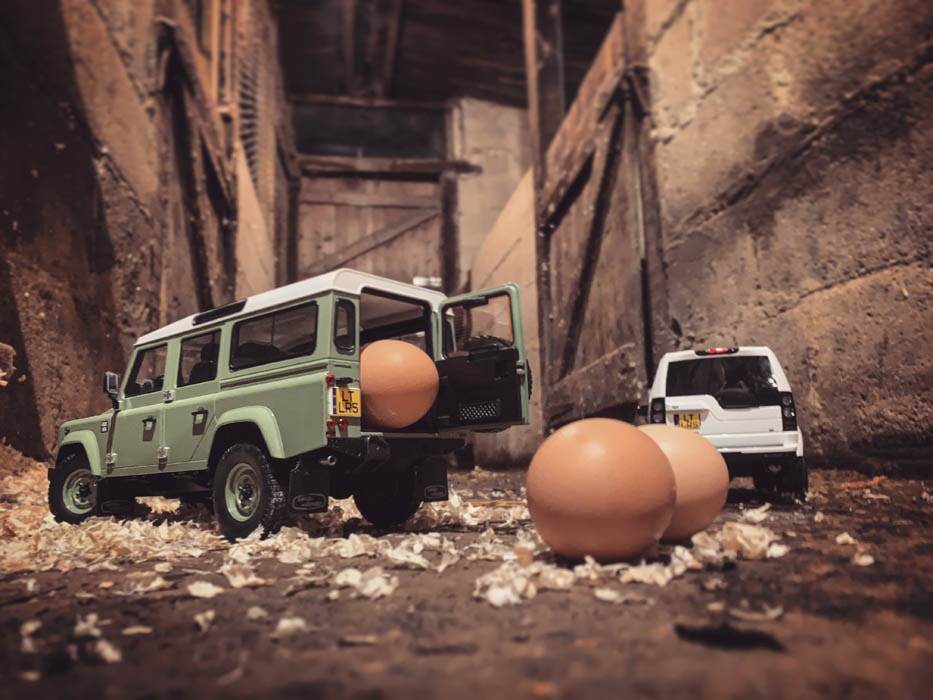 Land Rover fan and Instagrammer Liam Cant is like you or I – he loves 4x4 adventures, but just on a smaller scale!

If you’re fanatical about Land Rovers, but can’t afford to buy one yourself, what’s the next best thing? For 30-year-old Liam Cant from Attleborough in Norfolk, it’s combining his love of the great outdoors and Green Oval badged miniatures and capturing them on camera having their own thrilling adventures off-road.

By day Liam is a maintenance engineer in a sheet metal factory, but during his downtime he photographs miniatures using his iPhone. What started out as doing something creative for his own pleasure in August last year has turned into something a whole lot bigger (or should I say smaller?), thanks to some media attention.

Liam takes up the story: “The BBC ran an article on their regional news online section, and in one weekend I went from having 500 followers, which took me over six months to build, to over 2600. It’s blown me away. Even Land Rover asked if they could use my photos on their Instagram feed.” 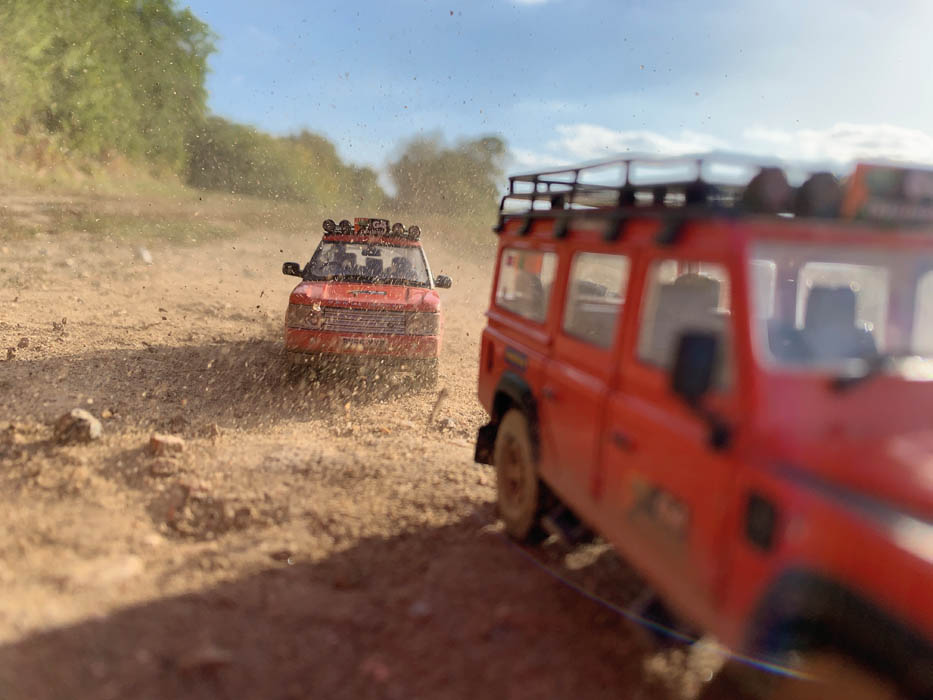 When Liam first started the account he was mainly followed by people who also did model photography, but now it is fellow Land Rover fans. He tells us that they’re very supportive and it’s a real honour to have so many people appreciate and support what he does. That said, so far Liam has chosen not to put a face to his work – he enjoys the anonymity of it all and after all it’s just a bit of fun. “I don’t want it to turn from a hobby to becoming a chore. A few people have asked if I would sell canvases of my images, which I’m very touched by, but as I say I do it for my own pleasure and it’s just a bonus other people get enjoyment out of it, too.” 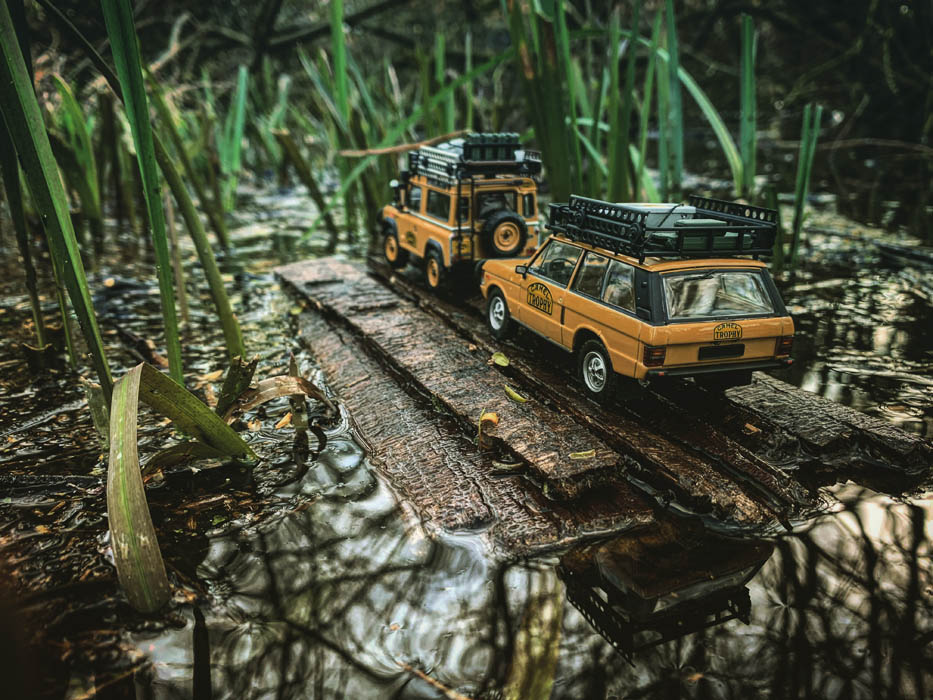 Back to the original spark that ignited this burning passion in Liam. When he was around 11 years old, his parents had a 200Tdi Discovery, and as soon as they got it they fully immersed themselves in the lifestyle that came with it. “I loved that car, but I also really enjoyed going to the shows and greenlaning in it. When they sold it, all of that stopped and I got quite upset. They subsequently bought other Land Rovers and Range Rovers but it wasn’t until I was 17 and started to learn to drive that I got back into them again.

“A friend of my dad’s had an old 90 and he got in touch to say would we like it for £600. My dad and I spent the summer holidays getting it back on the road. We welded the chassis and painted it red, and then for some reason painted the body beige! It originally had a two and a quarter engine and we did a gas conversion but then swapped it out for a 200Tdi engine. We also fitted disc brakes to the rear, a new canvas hood and a three-seater bench for the front. 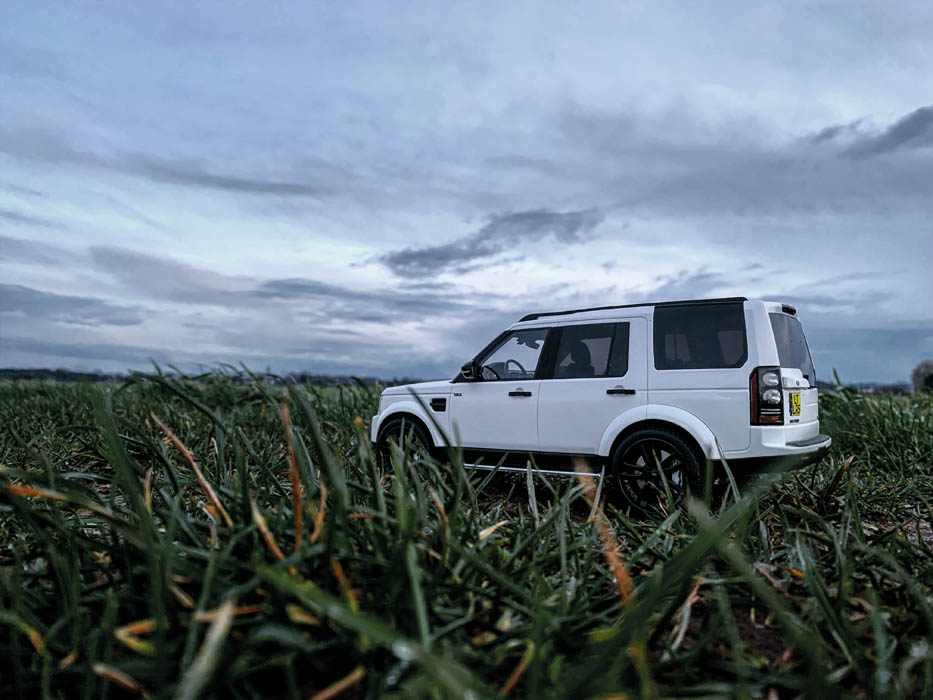 “I eventually sold that and went through various Discovery models but now I’ve got a Rover 75 as I’m not in a position to run an uneconomical car back and forth to work each day. One day I hope to own a Defender or old Tdi Classic Range Rover. While I can’t afford a real one, I thought, well I also love model cars, and I like photography, nature and being creative, so it just made sense to get into miniature photography with the one brand that I enjoy. 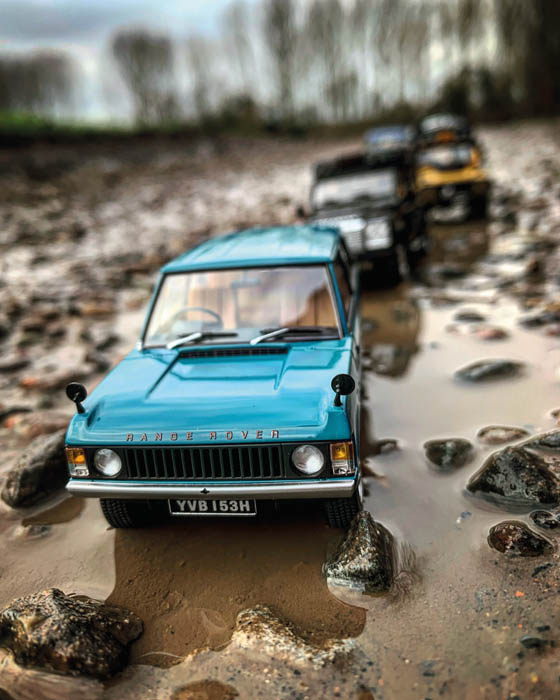 “There’s no other car that would fit in with an outside environment like the Land Rovers do. It’s great because you don’t need to carry around a load of gear – most of my cars are 1:43 so they’re small enough to walk around with and my phone fits in my pocket, too. That’s not to say that I don’t get the odd look or comment while I’m taking pictures. One guy thought I’d fallen over, he was really bemused. When he saw what I was doing he said ‘oh you’re playing with toys’. When I explain to people what I do and then show them my pictures they usually get it.” 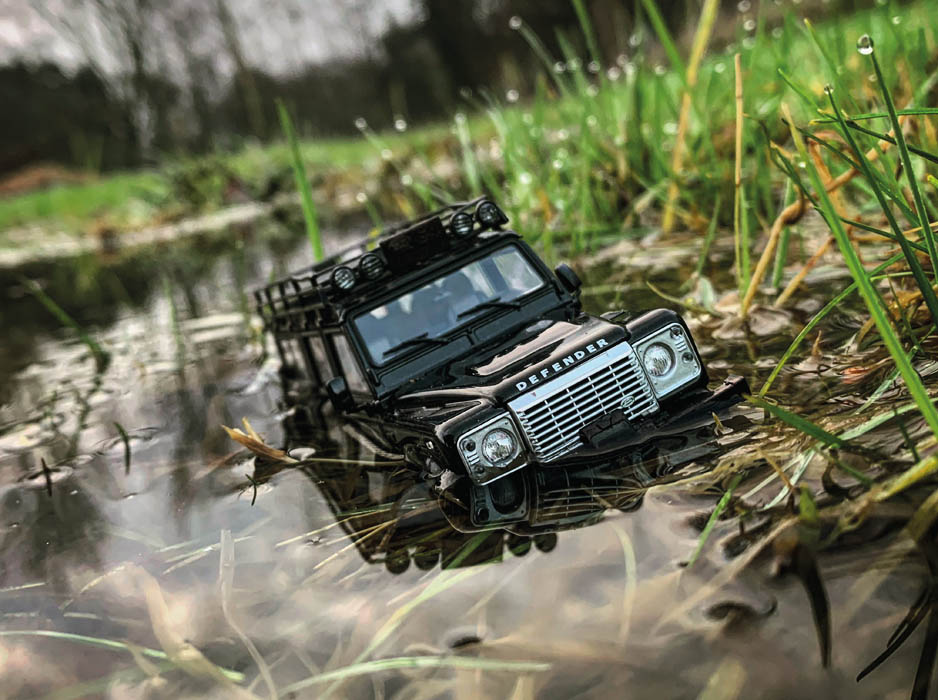 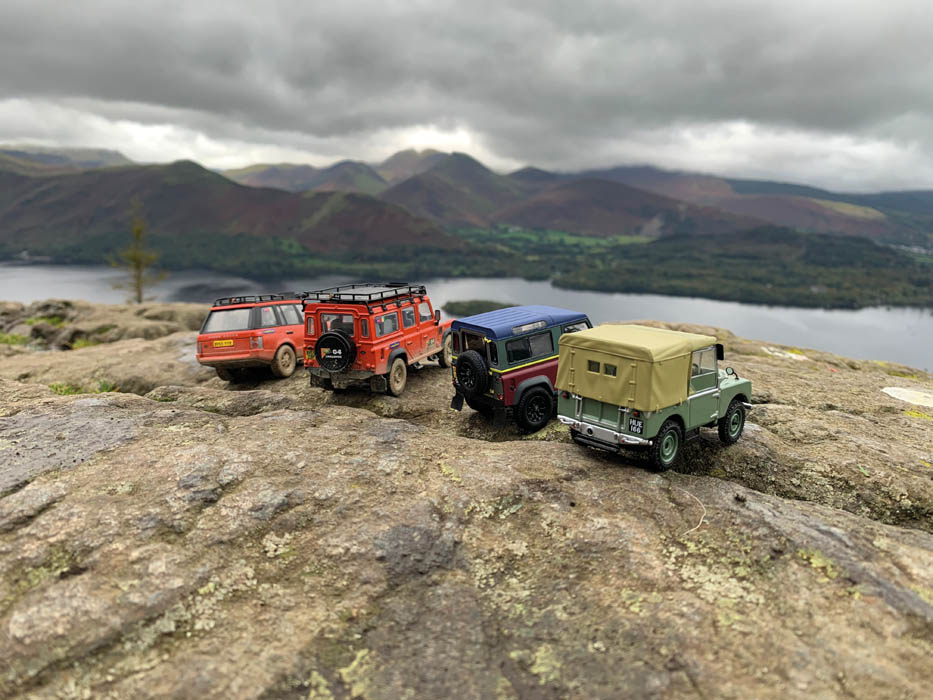 Liam gets most of his miniature Land Rovers from eBay – with the exception of Paul Smith’s Defender 90 1:43 Collector’s Edition, which is his favourite because of the story behind it (Paul Smith collaborated with Land Rover in 2015 to create a bespoke Defender, which features colours inspired by the British countryside and Defenders used by the Armed Forces, as well as details chosen specifically by the designer). “I’d love to spend an unlimited amount of money on them but some are very pricey. That’s why I haven’t bought a camera. I never use Photoshop nor have I read up anything on the art of miniature photography – I just try and get them in an environment where it looks authentic. I like to make it look as realistic as possible or just have a bit of fun with them, like the one where they’re dwarfed by the chickens.” 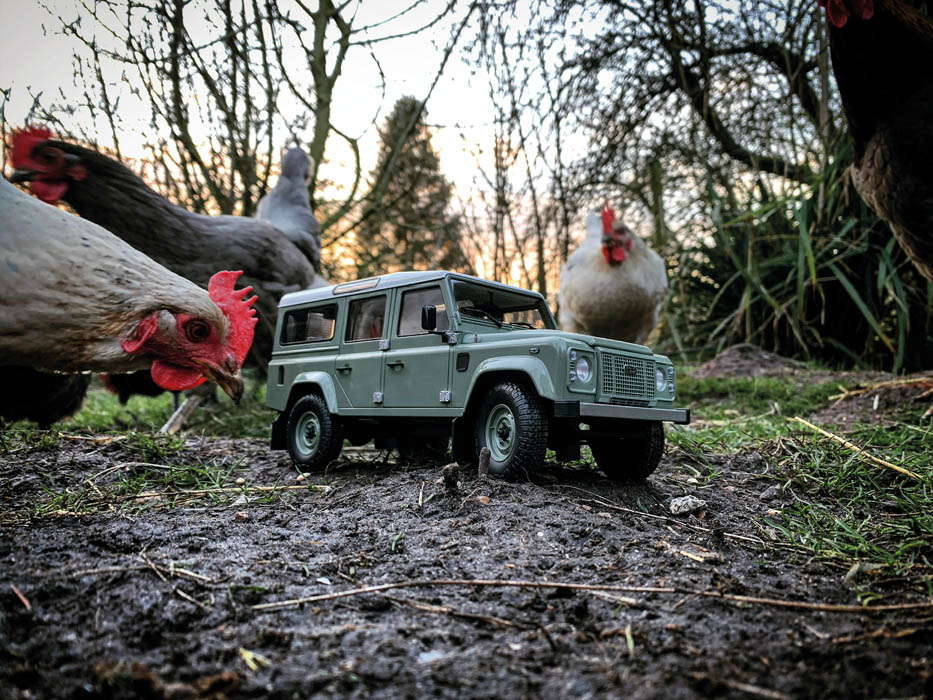 It’s fair to say that despite Liam’s modesty he’s really good at what he does and rather than do it for self-gratification he’s genuinely moved by the fact that others get something out of it, too. “My tip for anyone who wants to get into this type of photography is if you enjoy it, do it. It doesn’t matter what it looks like as long as you take delight in it – do it for yourself and not for others and certainly don’t worry about how many likes you get!” 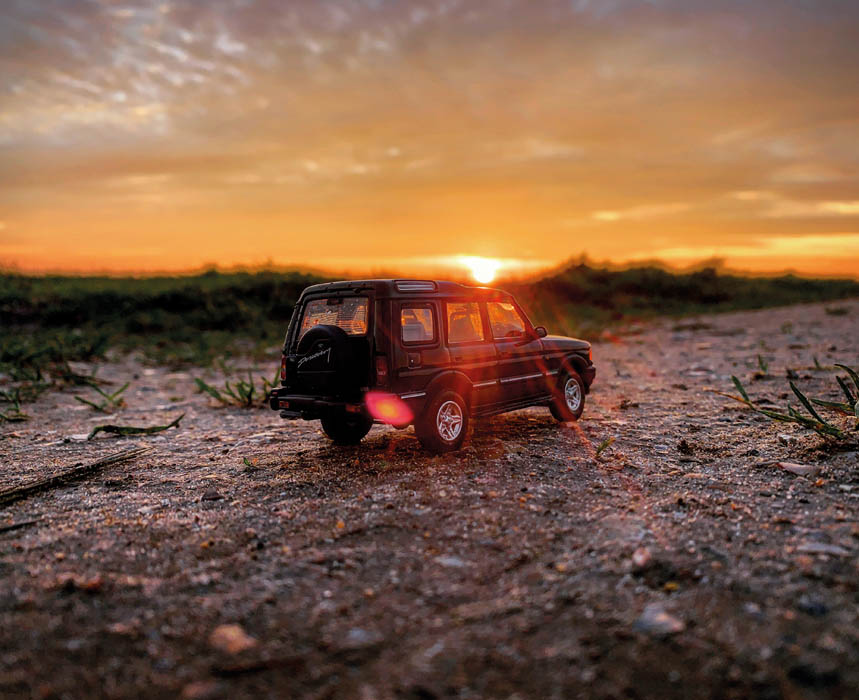 If you haven’t already followed Liam on Instagram, then do – he’s planning an expedition with his miniatures and we can’t wait to follow the story. He’s even taking them on holiday with them! It’s a good job his partner doesn’t mind!