Who says you have to rough it in the rough? : credit: © Melvill & Moon

In 2023 we will celebrate 75 years of Land Rover, the makers of the finest 4x4s by far. It seems likeonly yesterday that I was at JLR’s Classic Works when they shot the special video to celebrate 70 years of the brand. Over the years Land Rover have launched various special editions to celebrate historic milestones. We had the SVX Sixtieth Anniversary SE Defenders to celebrate 60 years of Land Rover. They only produced 1800 of these Santorini Black Defenders in both 90 and 110 versions. These were sold around the world. I remember my school mate Kevin Wright purchased one of them.

Then in 2013 when Land Rover celebrated senior citizenship they showed us the Defender LXV Celebration Special Edition at an event held on the Packington Estate. Guess how many of these they produced? 65, of course. 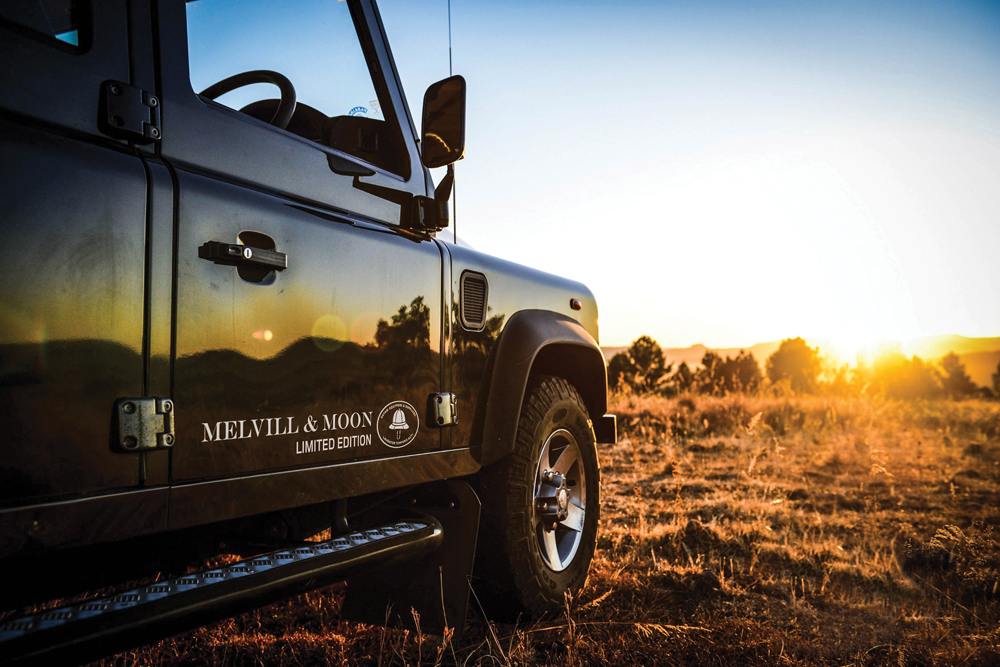 Meanwhile at the southern tip of Africa, the local Land Rover market decided to have a unique 65th celebration of their own. Land Rover South Africa announced that they would be producing 100 Melvill and Moon Limited Edition Defenders, a collaboration between themselves and Melvill and Moon, the makers of the finest safari gear in the world. This small run of Defenders would only be sold in South Africa though I recently found out that one was sold in Botswana and that very same Defender is currently in the Cotswolds in the UK (see page 52).

I ask Rick Melvill, one of the founders of Melvill and Moon how the Melvill and Moon Limited Edition Defender idea came about. ‘‘It happened after a campfire chat with the then MD of Land Rover South Africa, Kevin Flynn, who was and still is a good friend of ours. We then put in a more formal proposal to Land Rover – we wanted something old-school and classic-looking, especially in terms of the external look. Just like a Series I. One of the ideas that they floated about was a bright red or blue Defender while we wanted something like the Queen’s green with a white or tropical roof, which would have been fun. It came out a whole lot slicker than what we expected but we were delighted to be doing the project with them. We use our Defenders in the African bush while the folk at Land Rover probably see them as an urban crawler. I’ve driven Defenders all of my life. Even when driving them through a city you think you are on a safari. That is what happens when  you wrap an old Defender around yourself.’’ 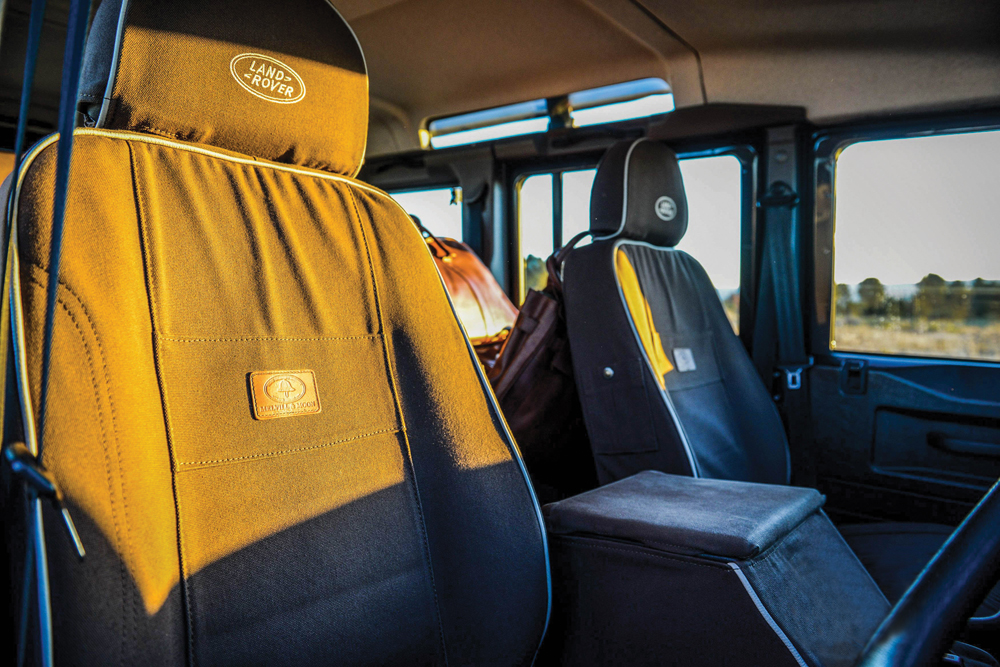 So what set these 100 Melvill and Moon Limited Edition Defender’s apart from a regular one? Let’s start on the outside. Firstly they are a unique colour called Havana and they have a distinctive black roof. I’ve seen a few of them in the flesh and on a dull day they look more charcoal in colour but on a sunny day they have a golden, bronze glow. The wheels are of the dual-finished variety and to complete the urban crawler look they went for the chunkier Goodyear Wrangler MTR tyres. Other unique external additions are Melvill and Moon decals on the front doors and rear of the vehicle. The final external touch was the spare wheel cover which had both the Land Rover and Melvill and Moon logos, plus it stated that this was a limited edition Defender.

Melvill and Moon have been sponsoring spare wheel covers for Defender Trophy participants for many a moon now and I have one on my 110 from the pre-pandemic event which I attended in 2019. 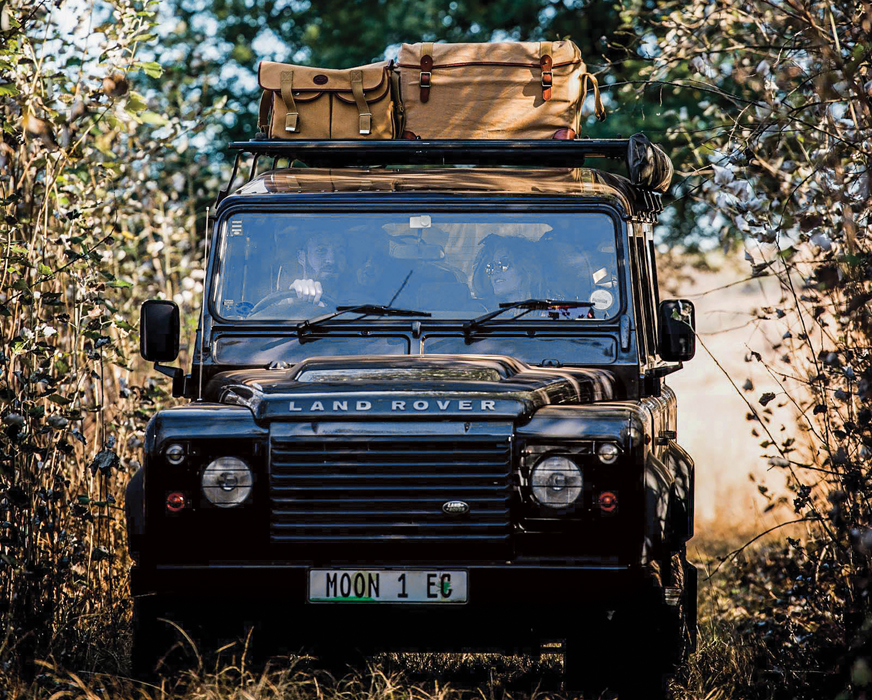 These unique Defenders included classy bags for your safari gear

What really set these Limited Edition Defenders apart from a regular one is the fact that they came with a whole range of great Melvill and Moon products. This included two Roorkhee campaign chairs, one wash basin/wine cooler, one Harry Moon side table with canvas cover , canvas seat covers for all seven seats with a Land Rover logo on the front headrests, the Bulawayo Bag and a medium sized Safari Duffle Bag, Canvas Toolbag, Centre Console Cool Bag, Border Travel Pouch and a Kalahari Cooler. All of these products turn a regular Defender into a classy, safari-ready Defender.

I ask James how they decided on what products to include in these 100 unique Defenders. ‘‘We played around with the space that was available in the Land Rovers and did not want to include any bulky or unnecessary items. Everything had to stay in the Landy when not in use. We wanted the seat covers to be unique so we got a custom chocolate brown canvas made for us. Stitching on the seat covers was Ivory Cream with white piping which further personalised them. We wanted to include products that were needed when you stop to have a picnic or sundowner. Obviously we would have loved to include one of our bars in the line-up but we did not want to promote drinking and driving.’’ 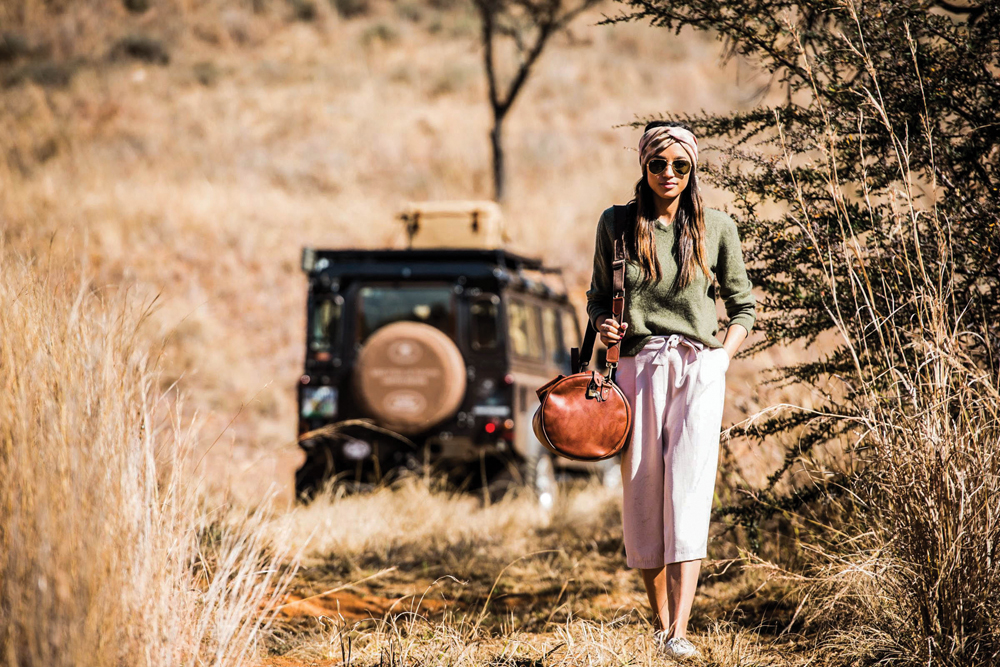 Doing it in style

Melvill and Moon purchased two of the 100 special Defenders  that they produced and you know it is your lucky day if you happen to see one on the streets of Cape Town or Johannesburg. James is quick to inform me that one sad owner did roll his on a trip to the Kalahari and he is not sure if it was fixable. Now with the tenth anniversary of these Defenders just around the corner, I ask him if they have any events planned to celebrate this unique collaboration. ‘‘Our wish is to get as many of the Melvill and Moon Defenders together again. Maybe an overland trip to historic sites such as the Isandlwana or Rorkes Drift battlefield? It could become a regular thing you know. It would certainly be a great way to show the Melvill  and Moon products in action and to get all the owners together. We could start from our factory in the Eastern Cape and make our way to the Natal battlefields.’’

Just imagine that. A massive gathering of Melvill and Moon Defenders at those incredible historic sites. James and Rick try to keep their two Melvill and Moon Defenders as original as possible. During the recent Cape version of the Defender Trophy they damaged the decals so they had to get a sign writer to make up new ones for them. They made a few spares just in case other owners also need a set. 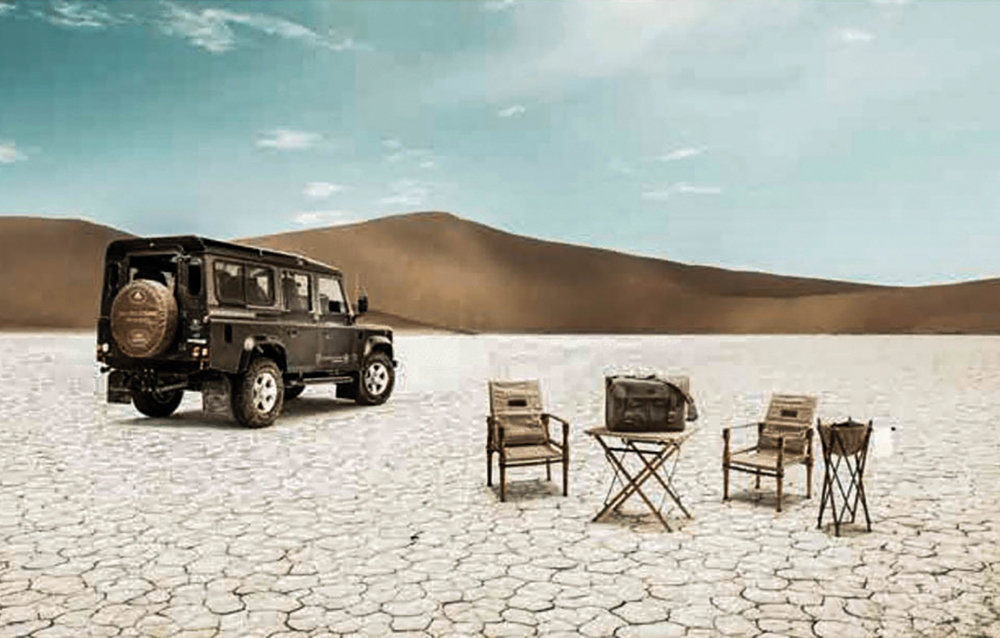 Melvill and Moon are very keen to try and work with Land Rover again in the future. They already make covers for the fairly complicated seats found in the new Defender 90 and 110, and they certainly add a great rustic element to the modern Defender.

Their products are the kind I expect to see at the Burghley Horse Trials or at a polo match.

I ask Rick for his final thoughts on the collaboration. ‘‘It was a highly unusual situation to have a vehicle with shared branding. I often think of the name: the Melvill and Moon Land Rover Defender and it makes me very proud.’’ As an ardent fan and user of Melvill and Moon products I think that it was a match made in Land Rover heaven. 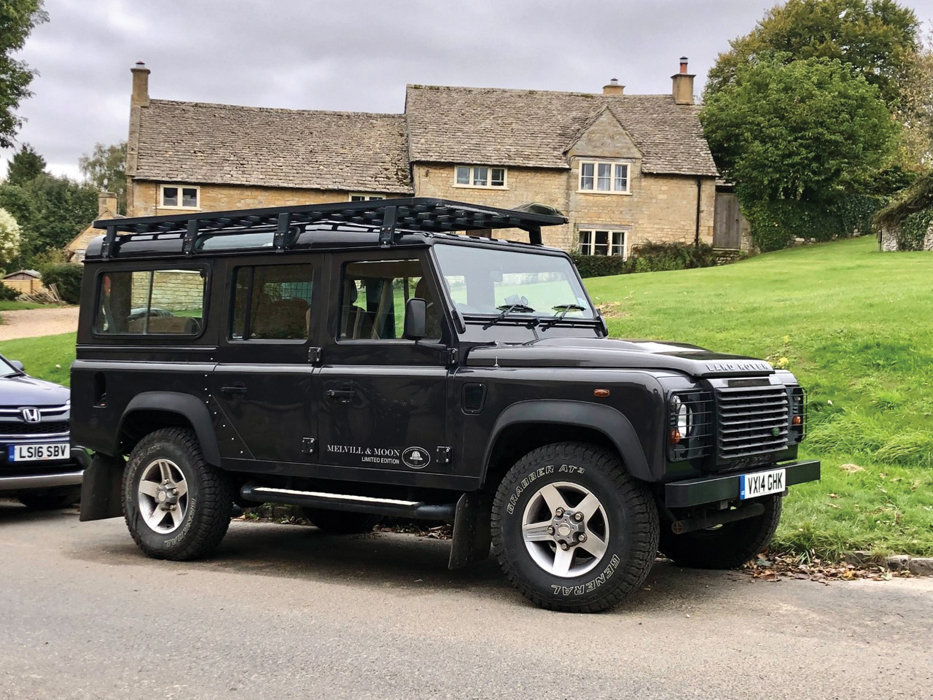 Andy Faulkner, who currently resides in the Cotswolds, owns and drives a Melvill and Moon Limited Edition Defender. We think that it might be the only one in the whole of the UK and I challenge anyone to prove me wrong. Andy worked for the Botswana government from 2010 till 2016 and lived in the capital city Gaborone at the time.

He drove a Toyota Hilux (with Melvill and Moon seat covers on) for a while but then in 2014 he saw the Landy light. In fact, what he saw was a new Melvill and Moon Limited Edition Defender for sale in the local Land Rover dealership. Obviously it cost a few more pennies than a regular one and this probably made it a harder sell at a dealership in the heart of safari country. Andy was smitten and  purchased it, he and his family then proceeded to use it extensively for trips around Southern Africa. They even fitted a roof rack and roof top tent to it.

When the time came to move back to the UK it had to come with them as it was now an important part of the family. Andy had no problems getting it back into the UK as it had been manufactured in the UK and today he has clocked up over 30,000 miles in his rather unique Defender.

Melvill and Moon are a well-established South African company who manufacture and sell a broad range of top-end safari and Land Rover accessories. Their UK division is headed by the energetic Steffi Halm and she can be contacted on [email protected] or see melvillandmoon.co.uk.