The classics of Chitwan When guests from Tiger Tops Tharu Lodge go searching for rare mammals like one-horned rhinos and Bengal tigers in Nepal’s Chitwan National Park, then only a classic Land Rover will do as their mode of transport

The classics of Chitwan Images

There are some places in the world where the sands of time don’t seem to flow at all. Just like a broken-down Land Rover waiting for the AA man in his yellow van who never comes. Cuba is a great example of one such place. During the 1950s and prior to the Cuban missile crisis, Americans visited in their droves. They did not come alone, bringing with them hundreds of large classic sedans with distinctive outlandish tail fins. This period was followed by the US economic blockade of Cuba that lasted over half a century. Which is why if you visit Cuba today, you can be forgiven for thinking you are at a B-grade classic car show in Minnesota.

In last month’s issue of LRM I wrote the first installment on my recent Nepal adventure. It was all about driving a Defender along some of the highest and most dangerous roads in Himalayan Kingdoms. For the purpose of this story I have come down those mountains to the southern lowlands. In fact, I am in a Land Rover time warp of sorts as I check into the Tiger Tops Tharu Lodge where they run a fleet of Series IIs and IIIs. I’m told they also have two former military Lightweights. This excites me more than the once-in-a-lifetime opportunity of seeing a tiger or rhino.

The Chitwan National Park is a half-day drive from the crazy capital city of Kathmandu, which is why it is a popular add-on to any hiking or climbing trip to Nepal. One day you can be trekking up some of the highest mountains in the world and the next you can be sipping G&Ts on the back of an old Land Rover while searching for a leopard, wild elephant or sloth bear.

In 2012 the Nepalese government decided to close all the lodges within the park borders, and so Tiger Tops moved from the World Heritage–listed reserve to Tharu village. To get into the heart of the park now involves the use of a Land Rover and a canoe!

We’re only here for two nights so the plan is to head out on an early-morning game drive. We leave the lodge in a diesel Series III 109-inch. Like any old diesel Land Rover it coughs and splutters to life before put-putting its way along. Joining us on our morning safari is the likeable Jack Edwards, the director of Tiger Tops. I ask him about the history of the family-run business that’s been synonymous with conservation since day one. “Dad started the business after purchasing an old hunting lodge from some Americans.”

The 932 sq km park too has hunting origins. In 1911, when still a hunting reserve, King George V and his son Edward VIII shot 18 rhinos and 39 tigers while on a hunting safari.

Today it’s a World Heritage Reserve with very healthy rhino and tiger populations. In fact, they have not had a rhino poaching incident for over five years at Chitwan. Might this have something to do with the fact that they have a zero-tolerance to poaching and there are several army camps scattered throughout the park?

We pass a few elephants with riders on their backs as we make our way towards the Narayani River. Time to disembark and take a canoe to the southern bank. It’s a misty morning and we can’t see very far. As our guide expertly uses the current to get us across, another Series III starts to slowly reveal itself. It has three rows of canvas seats in the back and no roof. Soon we are speeding off into the dense Sal forest, which covers about 70 per cent of the park. Our guide says it is the perfect place for a tiger to hide. I now know why the park is called Chitwan – it means ‘Heart of the Jungle’.

The park is home to over 500 bird and 68 mammal species. Our guide points out some spotted deer before instructing the driver to stop. There are tiger tracks running across the road. I climb out to have a look. A single paw print is significantly bigger than my hand. As we make our way through a shallow river Jack tells me why they use Land Rovers. “There is no better vehicle when searching for animals as we have to bash through some pretty dense jungle. They work really hard, which is what they were made for and if well maintained they are very reliable.” 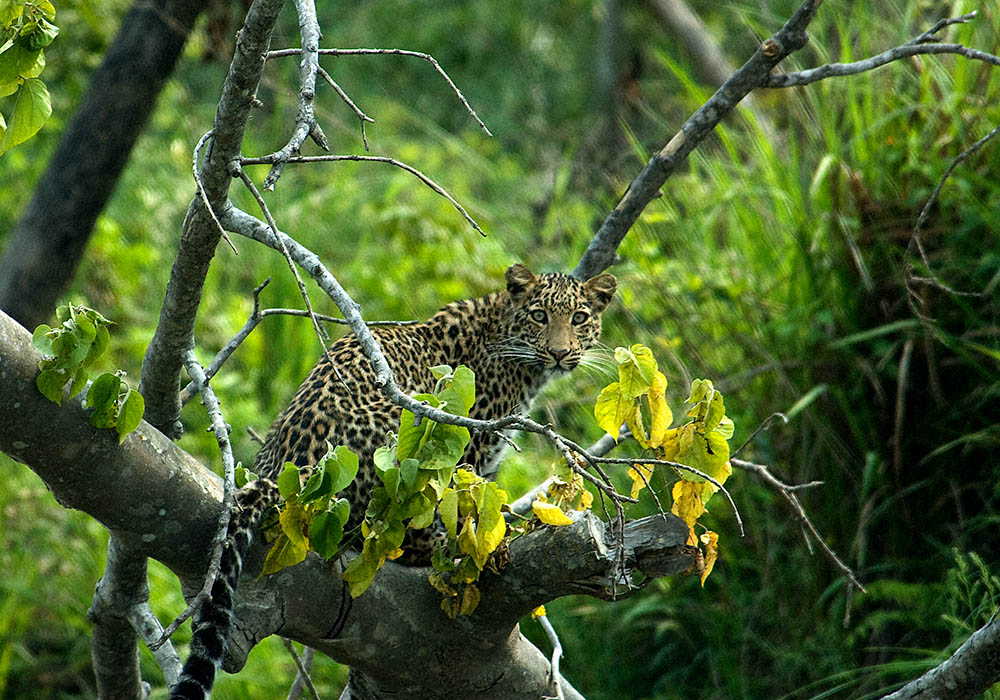 Leopards blend into the jungle environment

The British army has traditionally had a major presence in Nepal thanks to the Gurkhas and they too obviously run Land Rovers. Jack explains the connection. “My father was able to purchase a whole fleet of Land Rovers from the British army when they upgraded to newer Land Rovers. We have a very good professional and personal relationship with the Gurkhas.”

Our Series III makes its way through a clearing and soon we are parked up at Devi Tal lake, a popular birding spot. The diesel drone of our Series III does not seem to bother a nearby Kingfisher who is more interested in finding food. A mother rhino and calf appear out of the thicket on the opposite bank. The rhinos here seem more dinosaur-like than African ones. From the back it looks as if they are covered in a series of armoured plates. No, not chequer plates… 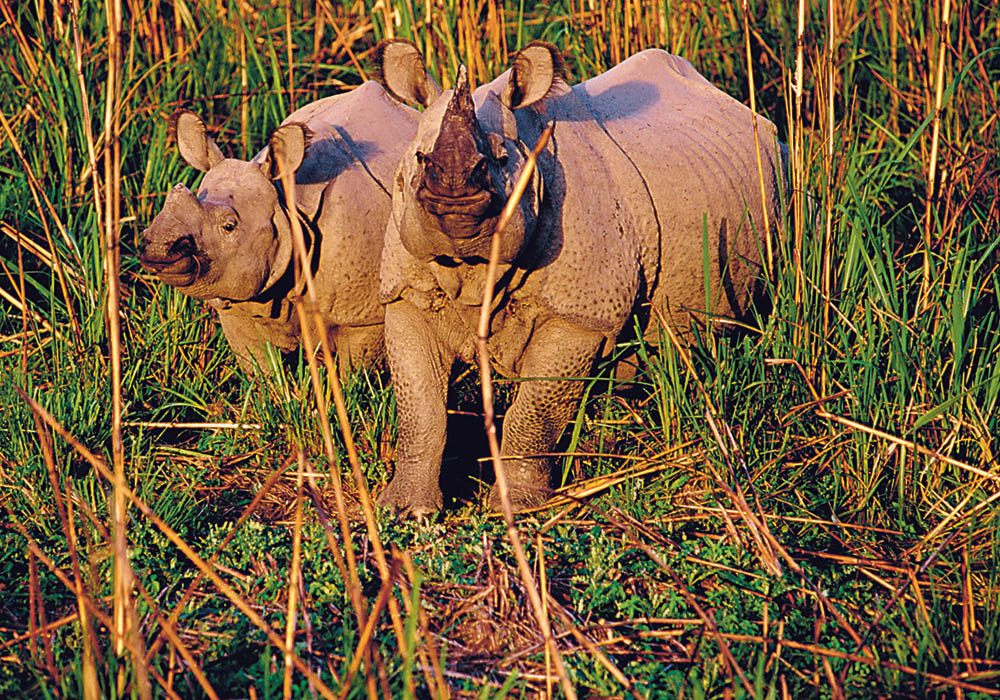 Our Series III moves deeper into the jungle as we continue on our tiger finding mission. The one thing that I have no doubt about is that running a fleet of these Jungle Jeeps (that is what the locals call them) in such a remote location does not come without operational challenges. Jack gets a wry smile on his face when I ask him to confirm this.  “The biggest problem we have is that we are working with pretty old vehicles and they need constant maintenance. Unfortunately import duties in Nepal are extremely high so when we can’t get parts here we have to source them abroad and that takes time and lots of money. Sadly there will come a point when it is not economically viable to keep on running these old Land Rovers of Chitwan.” 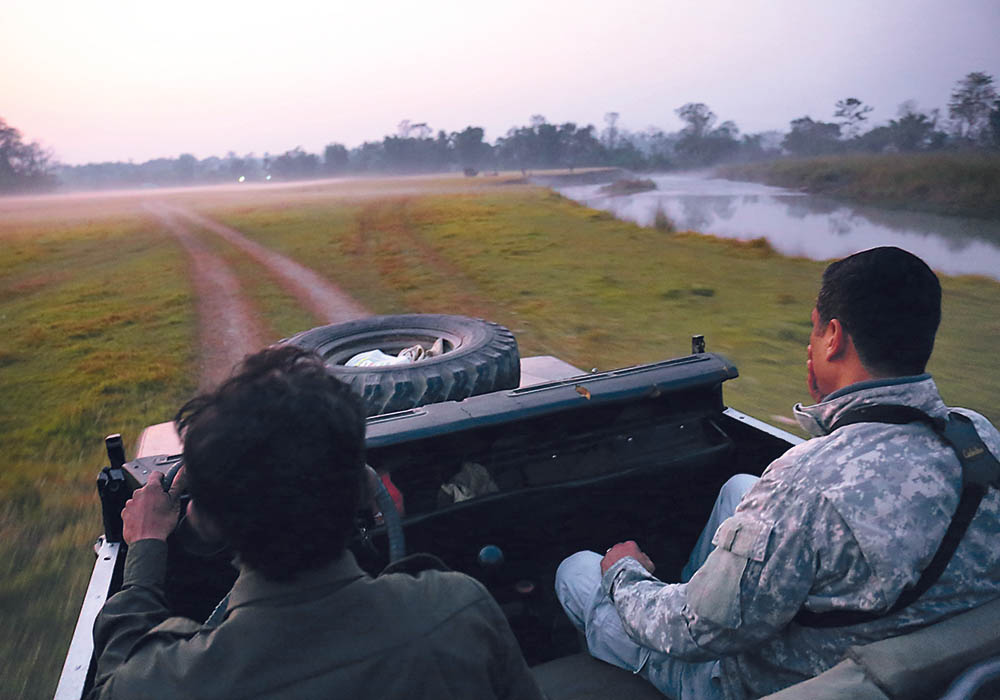 Locals refer to the fleet of Land Rovers as Jungle Jeeps

According to Jack the job of maintaining the fleet belongs to two self-taught mechanics. Ram Thapa is the main  man and has been working for Tiger Tops for 35 years and does the majority of the repair work himself.

So, are the days of the Chitwan Land Rovers numbered? I ponder this thought as we stop for a leg stretch at a spot next to the river where the tigers are fond of crossing. We can see for miles from the elevated river bank. All of us take a turn with the binos but no-one is able to spot an elusive tiger.

What we do see is the critically-endangered gharial crocodile. I have never seen one before and unlike African or Australian crocs it has long, narrow jaws which remind me of a chainsaw. This probably explains why it only feeds on fish.

We quietly make our way back into the dark forest but a monkey shouts out a warning that we are coming. The grass is high thanks to the recent monsoon rains and this makes spotting animals even harder.

Our Land Rover stops suddenly. There is a big male rhino in the middle of the road and he is probably less than 50 metres away. One of the other Land Rovers had a hole in the door from a rhino tusk. Our driver barely looks a day over 18 and this Series III is probably the first vehicle he has ever driven – I hope he can handle such a drama should the worse happen. Fortunately the rhino in front of us does not want to play with our Series III and so we proceed cautiously.

By late afternoon our guide calls off our tiger search and the time has come to make our way back towards the canoe river crossing point. I’m sad that we have not seen a tiger, but nature is not something you can turn on by pushing a remote control button. 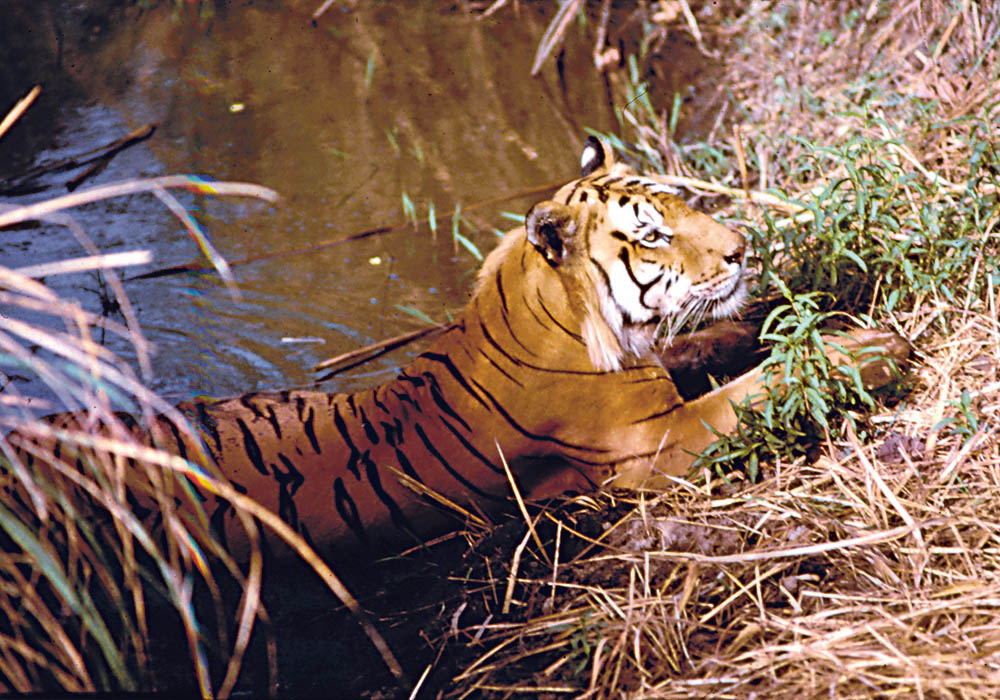 Sadly we didn’t catch a glimpse of the Bengal tiger

As we climb into the canoes Jack emphasises the role of the old Land Rovers of Chitwan. “The Land Rovers have been an important part of Tiger Tops since the inception of the business. We have clients who come back here year after year. Obviously they are coming for the wildlife but I don’t think they would return if our Land Rovers weren’t here. ”

The Land Rovers take a break from June until September during the monsoon rains. The only way to get into the park then is by walking or else on the back of an elephant. Incredibly the elephants have been used to recover stuck Land Rovers.

As we are about to leave the lodge the following morning a new batch of clients arrive on the airport shuttle mini bus. Judging by their hot-potato-in-the-mouth accents they come from a rather posh part of Surrey. They all get big smiles on their faces when they see the classic Land Rovers of Chitwan. I hope that they will still be here when I visit again in the future to try and find that elusive Bengal Tiger.

Tiger Tops Tharu Lodge
The only place for Land Rover fans to stay if visiting the Chitwan National Park. Large, comfy rooms. Food is of the highest quality. For more details see tigertops.com. 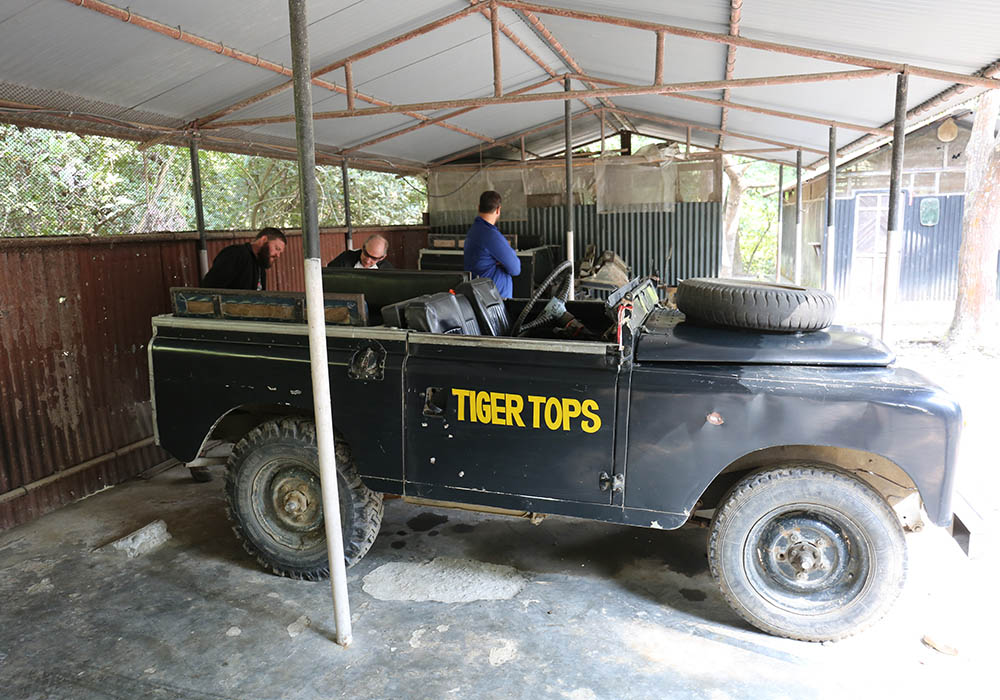