Photographer Richard Waite is used to shooting luxury yachts and villas, which probably explains why his Defender 130 Double Cab with a demountable camper looks so darn good

Home and Away Images

Richard Waite is an internationally-renowned photographer. The London-based snapper completed his photography degree at the Bournemouth and Poole College of Art and Design and since then he has been commissioned by some of the biggest national newspapers such as the Telegraph, Sunday Times and the Observer. He found his passion when shooting for Conde Nast Traveller and House and Garden magazines and today he is highly sought after by people who need images of luxury yachts, beautiful hotels, exclusive destinations and exquisite architecture.

Despite all of the above Richard is at his happiest when visiting faraway places and beautiful landscapes in his Defender 130 Double Cab demountable camper with his partner Carolyn Boult and Wheaten Terrier Betty.

His Land Rover story began when growing up in Folkestone. His architect dad owned a Discovery 1 and at the age of 13 Richard was already driving a tractor on a friend’s farm. A year later he confesses to surreptitiously driving his dad’s car around town at night.

Why a demountable camper? “I rented one when travelling around Scotland and Iceland and absolutely loved it. I just had to have my own,” replies Richard.

Demountable campers might add lots of weight but if they are demountable you can just leave them behind without a care in the world and head off to tackle any off-road obstacle without having to worry about damaging anything or a high centre of gravity.

His search for a Defender demountable camper began around four years ago and he struck gold an eBay. “I found a 2008 Defender 130 with a Swedish-built Skarosser EC8 camper on the back. The camper had been specifically designed for the Defender 130 Hi Cap. Best of all it had only done 1500 miles. It all seemed too good to be true. I just had to go and have a look at it. According to its owner it had been parked up for several years.”

The camper was in South Wales and owned by Nolan Rumsby of NSR Leisure, the UK distributors for Skarosser campers. German company BIMOBIL make a similar demountable camper for the Defender 130 Hi Cap.

“It was exactly what I was looking for at a very competitive price. It was fully insulated so it can comfortably withstand temperatures down to minus 35 C. It also ticked all the other boxes: toilet, shower, fridge, cooking facilities and sleeps four. Not that I would ever want to do that. Two people and my dog are enough to fill it.” 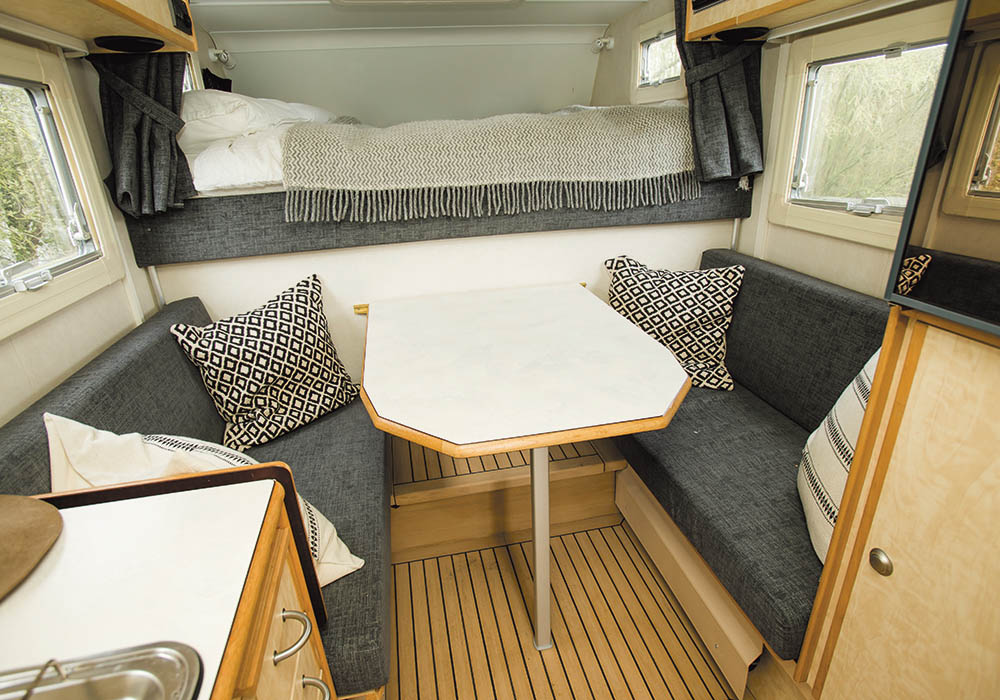 With cooking facilities, 100-litre fridge, 60-litre fresh water tank, toilet, shower and the ability to run on both electric and gas, this camper has everything you need

Since purchasing his dream camper Richard has already done four-week trips to Norway and France in it. He has also done some British getaways to places such as Snowdonia. “I gear my holidays around spectacular locations for photography as that is what I love doing, and my camper allows me to do just that. I can stay on location and be there at sunrise and sunset. I must admit my camper does attract a bit of attention in the campsites and people do come over to have a look and chat.”

I remember photographing a Bitmobil demountable camper on a Defender 130 Hi Cap and the most impressive and labour-intensive bit was the process of demounting. I ask Richard to demonstrate the same process with his Skarosser EC8...

There are four access hatches; one in each of the four corners of the camper, and each has a latch and chain that needs to be loosened before the demounting can begin. Then you can start winding the camper up and free from the pick-up. You cannot wind one leg all the way up, as this would make it unstable, so you have to raise each corner up a little before moving on to the next one.

A good trick is to put a marker where each of the wheels was before driving off. It will help with the lining-up process when re-attaching the camper to the Defender.

It took us 20 minutes to fully demount the camper and about double that to get it fully attached again. There are a few tricks but as with anything the more you do it the better you get at it. 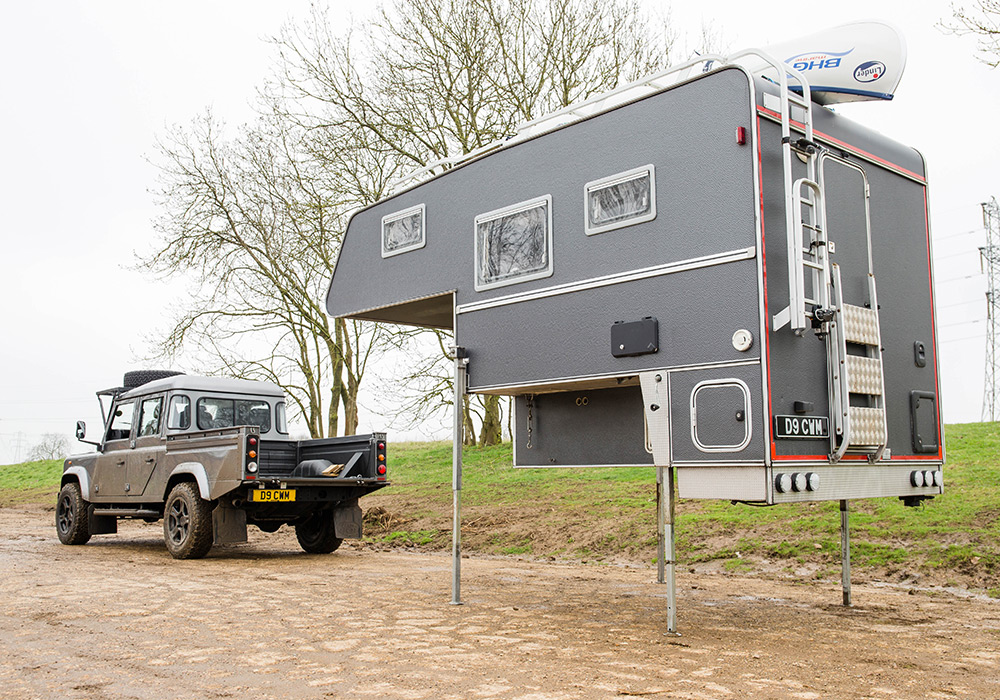 The camper fully demounts in 20 minutes

Lining it all up again when attaching the camper is probably the toughest bit, but it is certainly quicker than packing away a tent and clearing away your whole camping set-up. I can certainly see the attraction of it; my only concern is the weight (the unladen camper weighs 750 kg) and the height (with a canoe on the roof).

As with the purchase of most secondhand Land Rovers, Richard was not entirely happy with his purchase. “I ran it first for a few weeks and then decided what I wanted to change or upgrade. I also wanted to copy the look or ideas of some of the people out there doing incredible things to Defenders. This whole project was about me cherry-picking several stylish upgrades.”

One of the biggest bugbears for Richard was having a blindingly white camper and a grey Defender. “The camper would stand out a mile when parked up; I needed it to blend in.” He took the camper to Wrap Cube in Surrey who wrapped it in a matching colour to the Defender. It was not straightforward, as the camper was too high to fit into the Wrap Cube workshop. So, it was demounted onto wheels and transported into the workshop. Talk about thinking out of the box.

Next stop was the TMD Tuning team. “They were magnificent and changed the look (and braking) of the camper,” explains Richard. TMD Tuning added a Tarox six-pot caliper kit. The camper is a big old lump and when fully laden it probably is not far off the three tonne mark. According to TMD Tuning, by increasing the brake pistons from four to six, there is a 25 per cent reduction in the braking distance. Other additions included a KBX front bumper, DRL rear bumper and TMD anti-roll bars, plus Double din sat nav, reverse camera, Manta wheels, stainless bolt kit, side runners, led lights and rust treatment by The Thatched Garage. 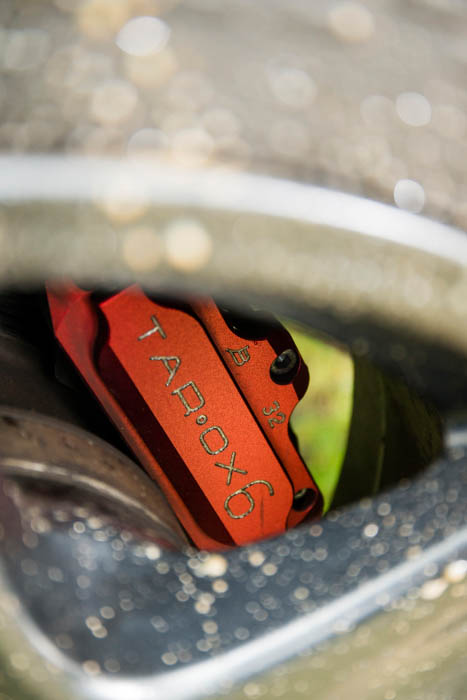 Tarox six-pots help to haul in the extra weight

Completing the chassis upgrades was up to Foleys SV, who installed air suspension and double shocks at the back. That is so that if one of them breaks the second can still do the job.

Now that he had it looking and driving like he wanted, Richard started on the interior. The Teak Man installed a synthetic teak floor. It has a 100-litre fridge, which can be powered by the leisure battery for a couple of days before needing a charge; a 60-litre fresh water tank; and it runs on both electric and gas so the camper never gets cold, even if there’s a blizzard outside. All these upgrades have taken place over the four years that Richard has owned the camper. 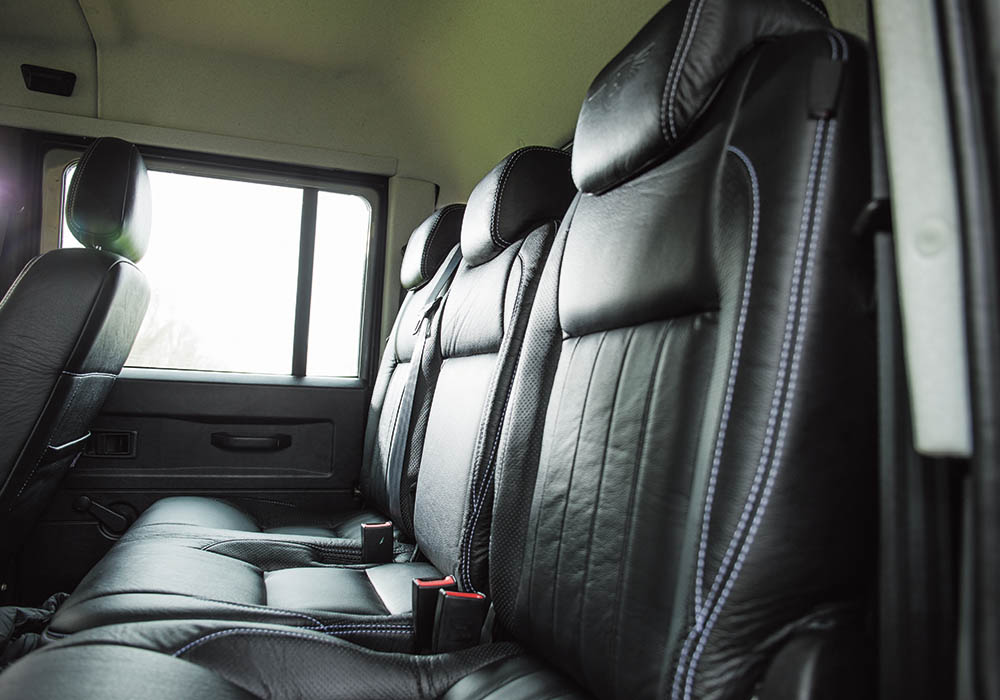 The cab has been treated to a full leather retrim 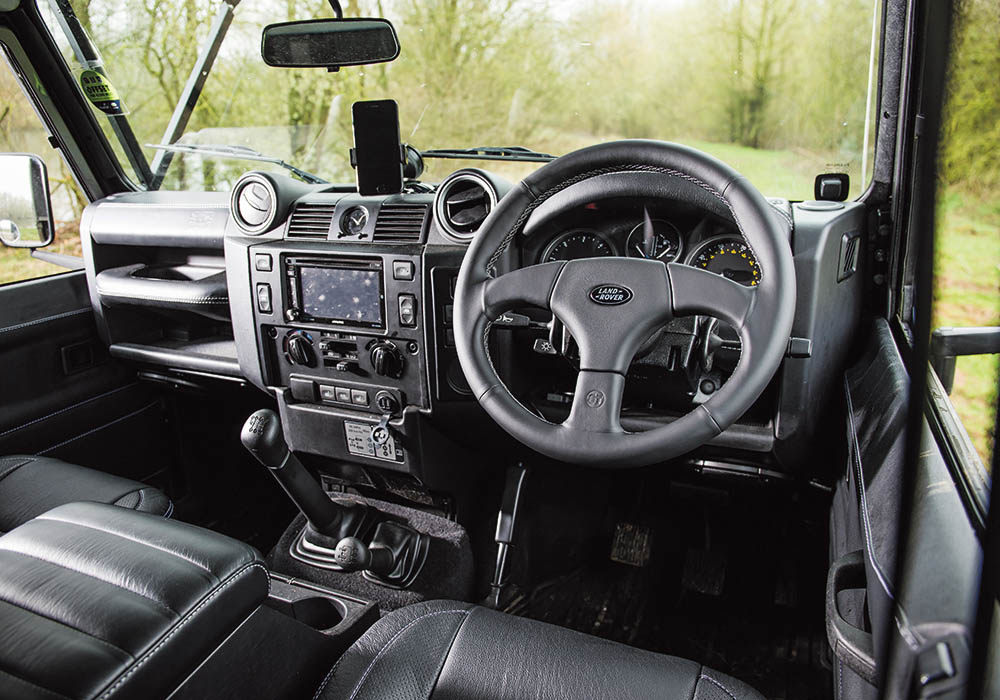 Did we mention that Richard also purchased a Linder canoe from BHG Marine in Lymington? It comfortably carries him, Carolyn and Betty, so now there is nothing to stop him exploring the world by road and water, with the Outer Hebrides the first location on the agenda for this summer. “The great thing about my set-up is that it has everything you need; you don’t need to rely on anyone else.” 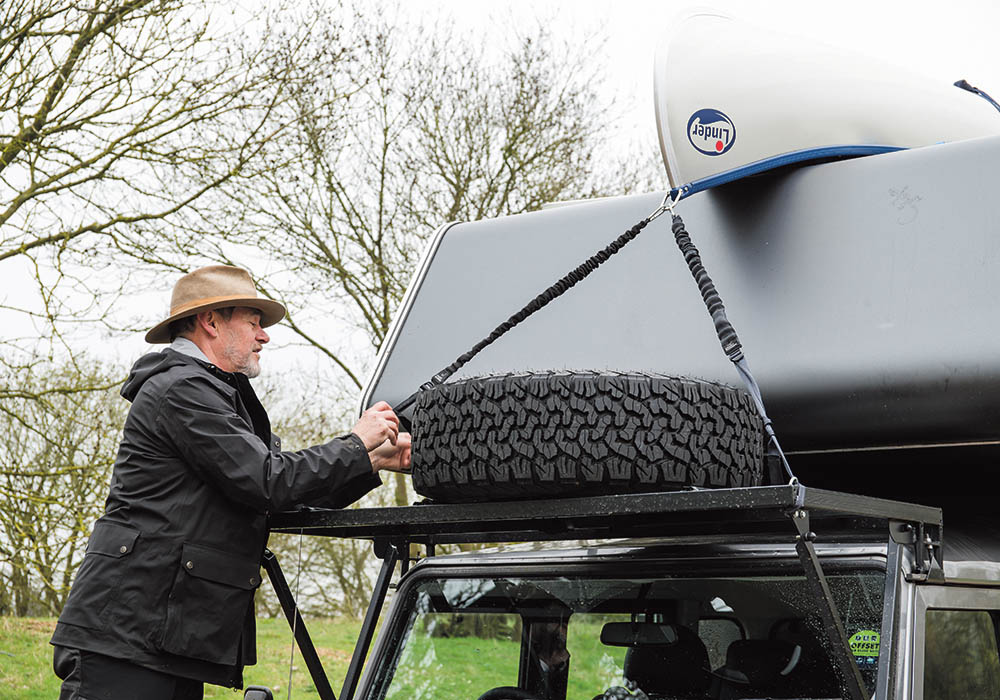 Canoe means this really is a go-anywhere camper

As someone who has done a lot of travelling with work, when he does go away in his camper it is on his terms and without the people who inhabit or own the yachts, hotels or houses that he normally photographs.

“The purpose of this vehicle is not to stay at campsites. I don’t photograph campsites; I photograph landscapes. I don’t mind the quirky or odd campsite but they have to tick my boxes and allow open fires and be dog-friendly.”

Richard’s camper is a thing of beauty, so if you do happen to see it parked up somewhere this summer, say hello and ask him for a peek inside. But beware: a Land Rover demountable camper will soon be on your wish list.