My Land Rover, my lifeline 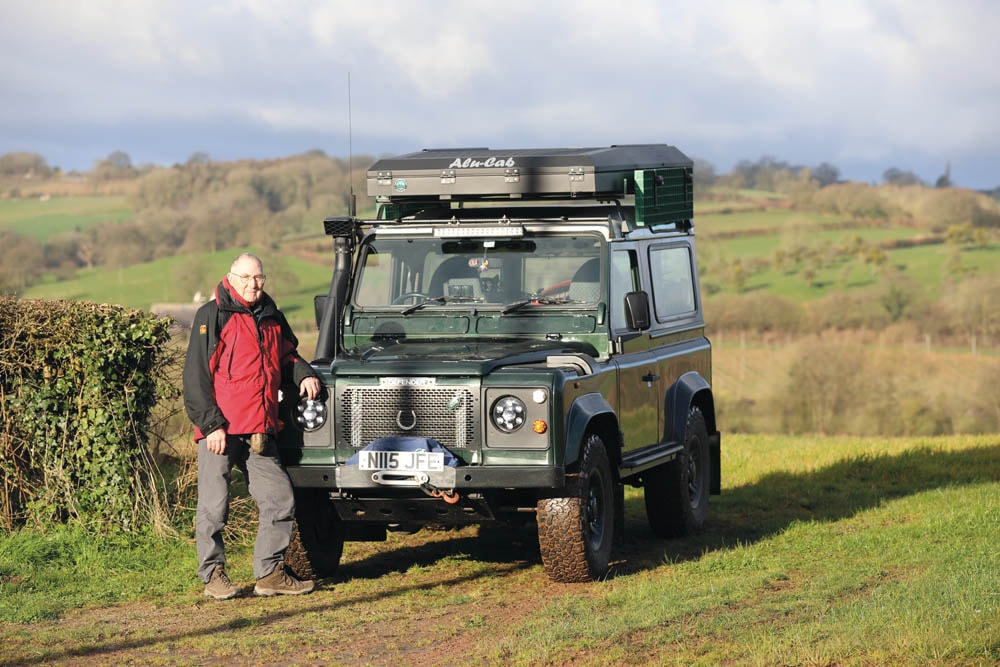 Gary's 90 maintains his independence at the age of 77 : credit: © Patrick Cruywagen

At a time when most of the world is dealing with the challenge of isolation, being alone is nothing new for 77-year-old Gary Thompson, who is blissfully happy just so long as he has his Defender 90 for company.

“My Land Rover takes me where my legs won’t any more,” says the retired leisure industry manager from Blyth, near Worksop. “The outdoors have always been an interest to me, particularly walking and trekking and especially during the 13 years I spent in the north of Scotland. We lived 50 miles north of Inverness and I could walk out of the cottage onto the hills and wander all day with only the wildlife as company. The wilderness, peace and tranquillity was marvellous.

“In my younger days it was the Pennines. I loved the hills and mountains then and I can still enjoy them today because the capability of JG, my Land Rover, is unbelievable and it transports me to such places.” 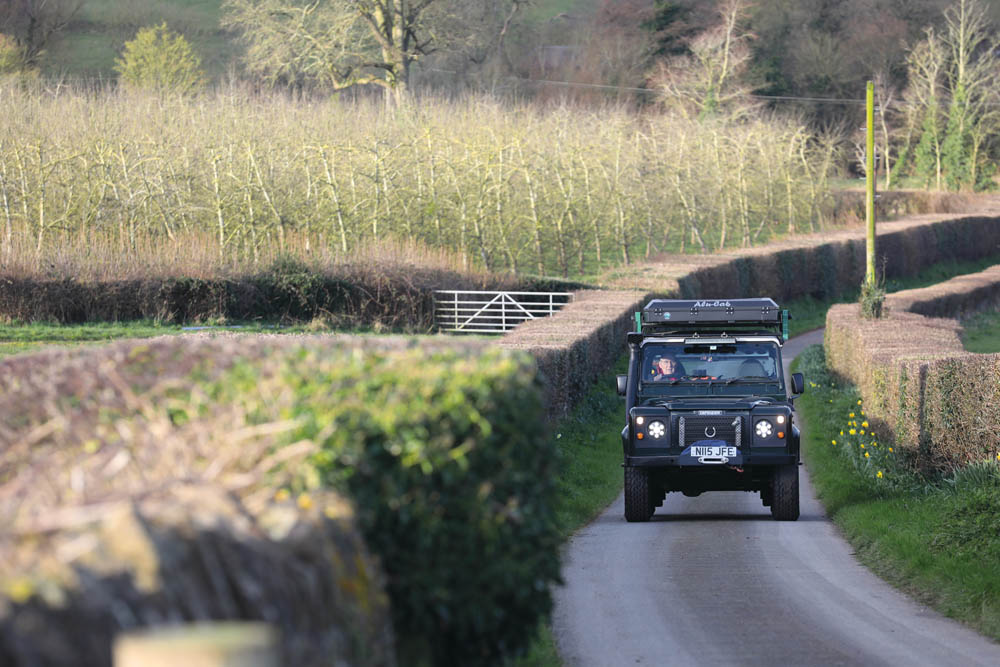 Gary bought his beloved 300Tdi Defender brand-new, in 1995. The ‘JG’ nickname comprises the first initials of his much-missed partner, Janet, and his own.

“It wasn’t my first Land Rover,” he says. “I can’t remember exactly when I bought the first one, but it was a white SWB Safari, with a twin roof; the second a 90 hard top in cream and the third another 90 hard top. Janet and I enjoyed caravanning and always had a Land Rover to tow with.

“When we returned to England in 2016, we had plans to continue caravanning, but after her death in October the same year I found I could not accept the fact that her bed was empty, so the caravan was sold. After a chat with Land Rover specialists LVB of Armthorpe, Doncaster, I decided to update the lights, then further discussions about off-roading and overlanding led me to purchase a soft roof tent thanks to James Baroud at Horizon Vision.

“The bug was caught and in 2017 the improvements really started to take shape. It was developed so that I could maintain my independence and be capable of travelling all kinds of tracks, trails and overlanding trips. I obtained my first passport in February 2018 and my trips abroad started. The majority of these have been with Pilgrims 4x4 Adventure Tours, who have looked after me and my little old 90 extremely well.

“It is modified for off-road driving and overlanding. All mechanical modifications and upgrades since 2016 have been done by LVB, although I did the rear interior modifications myself. I have no favourite modification, but if pushed it would have to be the roof tent. 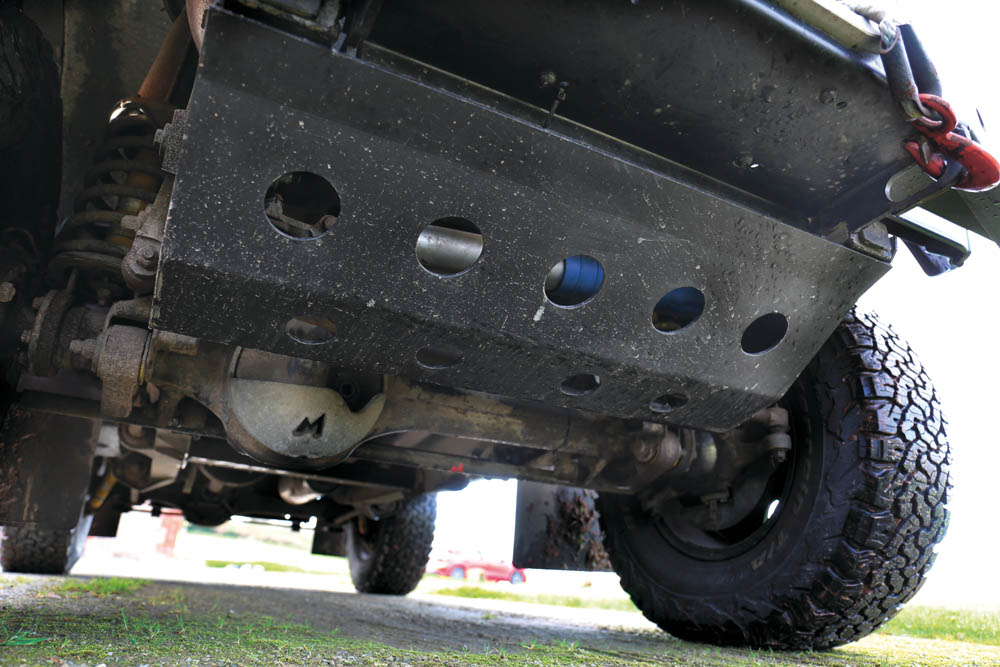 “All the modifications and upgrades have been done to improve the vehicle’s performance, safety (braking) and my enjoyment and trying to keep JG looking like a standard little old 90.”

The extensive modifications are listed below and we agree that they all work in harmony without detracting from the subtle green Land Rover look. Visible exterior additions like the winch, snorkel, alloy wheels, BFG tyres and underbody protection serve only to enhance this Defender’s meaningful good looks. 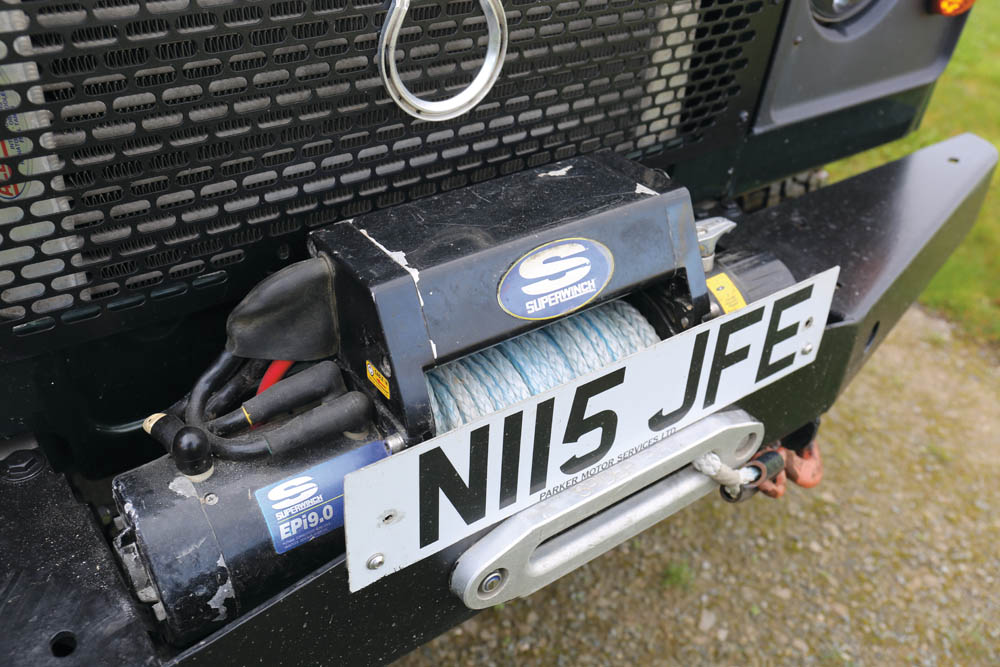 But what about the ‘lucky’ horseshoe mounted on the front grille? “It’s what’s known as a racing plate, and was given to Janet and me by an ex-National Hunt jockey, a long time ago,” explains Gary. “It has adorned our Land Rovers ever since.”

“The only problem I’ve experienced so far has been two faulty alternators whilst coming home from a Pyrenees adventure, when I had to call on help from the RAC, north of London,” says Gary. “Apart from that incident it has been extremely reliable, which is possibly due to my insistence on regular maintenance and servicing. I only carry out simple tasks like changing wipers, checking fluid levels and tyre pressures. The services are done by the pros at LVB.” 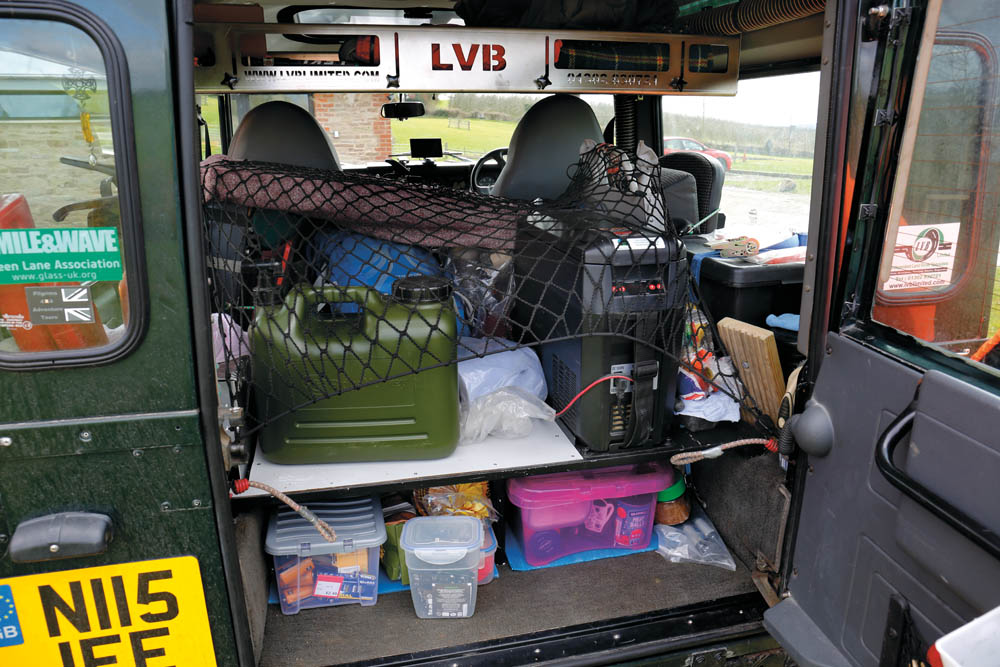 Thoughtful use of stowage space is essential in a SWB

But as previously mentioned Gary did carry out the interior modifications on his Defender. They include removable plywood shelves on the sides that accommodate boxes containing cooking equipment, stoves (two Jet Boils, as well as an MSR fuel stove, for emergencies), MSR water purifier, plus any other items that can be fitted beneath.

On the top is a 12-litre Snowmaster Traveller fridge/freezer, winching equipment, Hi-Lift jack, holdall for clothes, Helinox camp chair, plus all the other odds and ends. There are also more switches and dials in the dash area, thanks to the fitting of a Raptor dash. 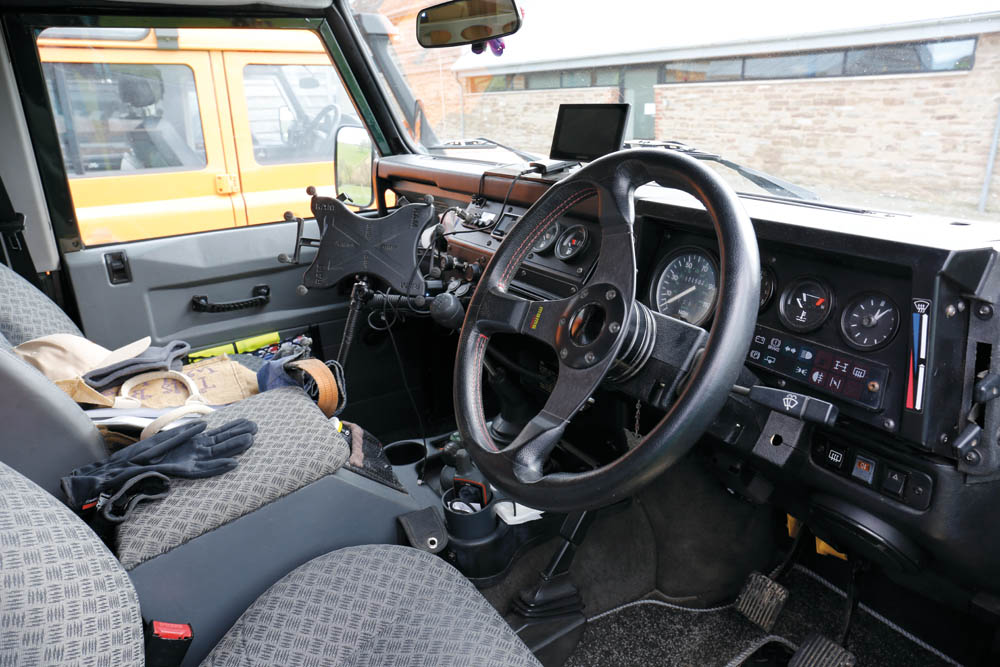 Every modification has been done for a purpose – to make this very special Land Rover the ideal home for Gary while he enjoys his overland and off-road adventures, which he often does alone.

“I have two grown-up sons, but since the loss of my best friend Janet the vehicle has been developed to suit my needs,” he says. ”I know it sounds selfish, but I am a bit of a loner and always have been. What I like best about being alone in the countryside in my Land Rover is the peace and tranquillity, being in remote places and being able to drive in challenging conditions.

“I’ve always enjoyed the outdoors, particular playing football in my younger days. Cycling was also an interest as was walking and trekking. I got into camping by being a member of the Scouts when growing up in Doncaster and a summer camp on the side of Loch Lomond near Balloch.

“Pilgrims 4x4 Adventure Tours have guided me on my learning curve over the past two years so I must say it is them who have inspired me to travel further and tackle the Alps – the best trip I’ve been on in my Land Rover. It was awesome.

“I enjoy any trip but prefer those including off-roading and remoteness. Whether they be in Wales, ferry hopping up the west coast of Scotland, Yorkshire Dales or Pyrenees.

“The furthest I’ve been to date is the Mediterranean coast at Cadaques, in the Cap de Creus peninsula on Spain’s Costa Brava. I don’t really have any ambitions although I would like to take my Land Rover on an adventure in Norway. 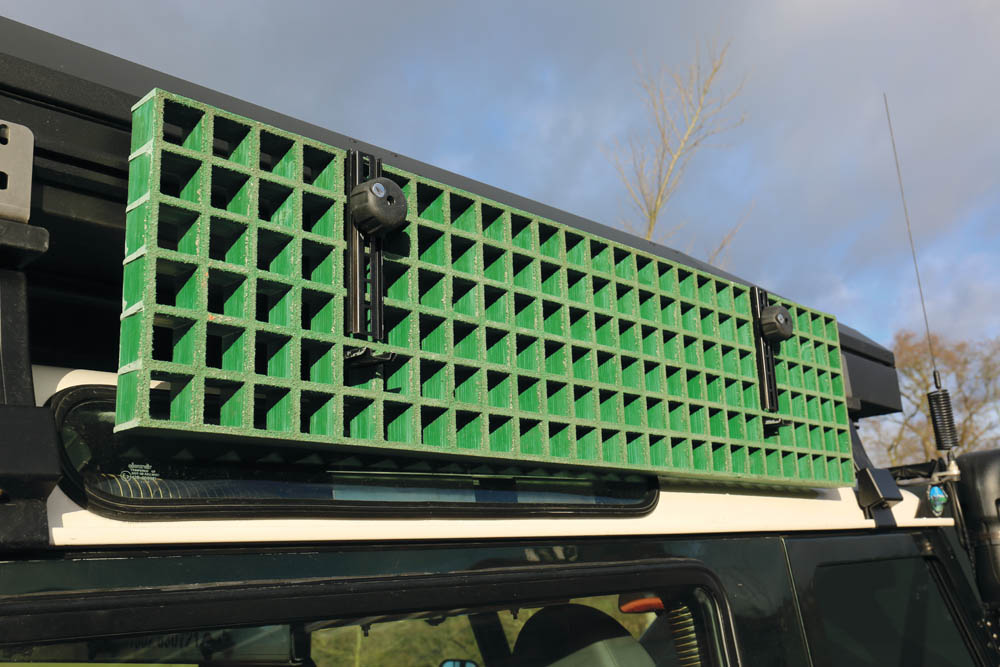 “I do not smoke nor drink, I like my own company, the outdoors and enjoy a challenge and adventure and try to keep myself occupied and busy. I really am a bore, I suppose – early to bed and early to rise. I have no other specific hobbies; I just enjoy my Land Rover and keeping busy. I am basically a solitary person and enjoy my own company, but I’ve made friends through Land Rovering.

“For me, my Land Rover means independence and the ability to continue to see remote places. Wild camping is my favourite part of overlanding the feeling that I am or we are the only person or people there.

“Before my current Land Rover, I owned various other vehicles including Jaguars XJs, a Porsche 911S, BMW 3 Series’ and a Mini, in addition to the Land Rovers I owned at the time. What’s special about Land Rovers to me? My little old 90 can take me anywhere within reason, has no complicated electronics and is British. At my age I doubt if I will ever buy another one, but if I did it would be an old classic – probably a Series I.

“I’m in good health at present, but one never knows what the future has in store. The one piece of advice I would share with others is to respect the countryside and stick to the Countryside Code. Leave it as you find it and, if you go greenlaning, practise the guidelines set out by GLASS, but most of all just enjoy life.” 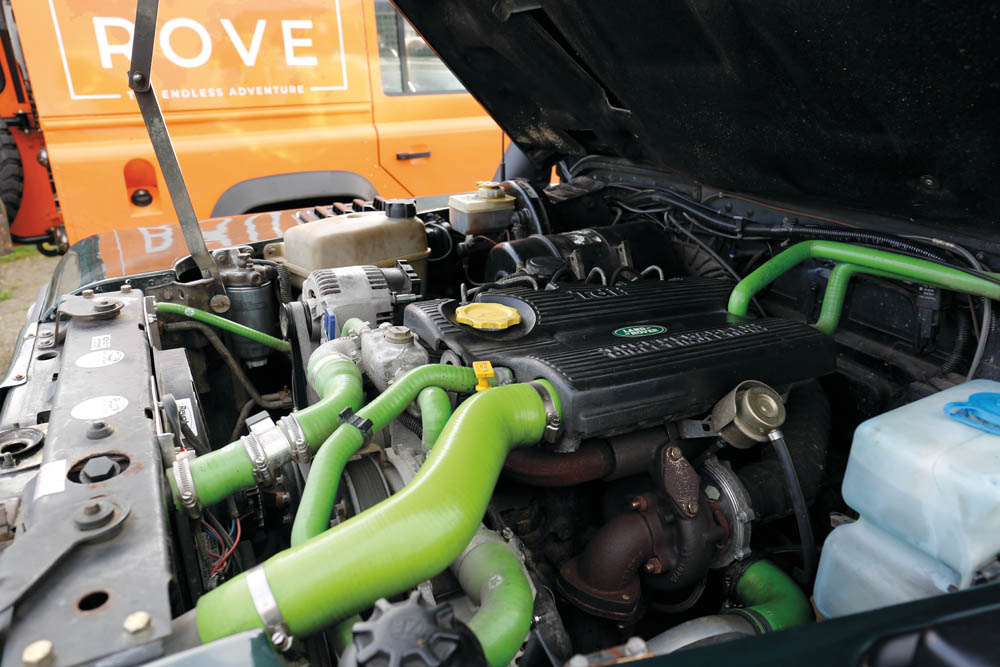