The beast of Meribel 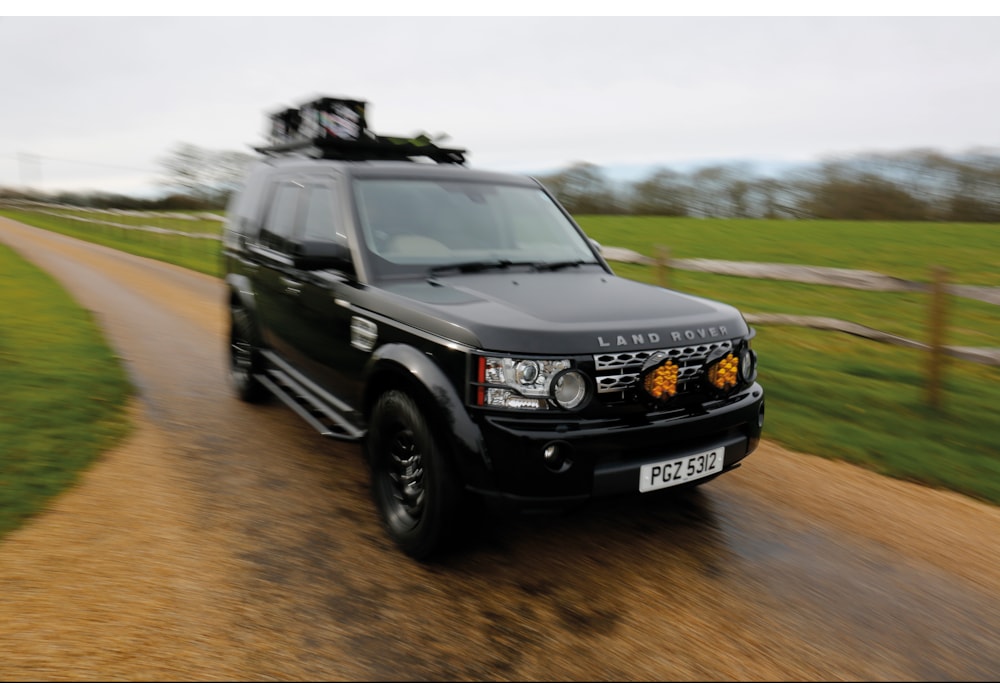 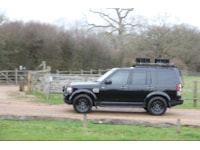 Olly wanted a Discovery 4 5.0-litre V8. The only problem is they were never sold in the UK. So Olly asked Ross Burcham, the extraordinary car locator, to find him one — and he did

I am a Rolling Stones fan, and one of my favourite tracks is ‘You can’t always get what you want’. I often find myself singing it to my son. He does not like it but such is life. As Land Rover enthusiasts we drool over websites, magazines, brochures and adverts dedicated to the marque. We have a permanent itch that permanent scratching will never fix. We are always dreaming of the next purchase or project, or if you are a Land Rover thief in the UK, the next Defender theft.    I would love an early Series I, while my wife wants a new Defender 90 and my son wants a Traxxas TR4 radio control Defender. My son already has every other RC Defender in the world so he is not getting a Traxxas, the new Defender 90 is not out yet and I can’t afford an early Series I. So maybe Mick Jagger was right, you can’t always get what you want.

Let me introduce you to Olly Sedgwick. He is a financier in central London. He works hard and when he plays hard in the winter, he normally heads for the French Alps as he has a ski chalet in Meribel. The only problem is that up until very recently he was a VW Amarok owner. Not a bad option when you need to transport a tonne in the load bay but hardly ideal when you have to carry three kids, the wife and skis in comfort and style.

Olly had purchased his Amarok from Ross Burcham of Burcham Car Sourcing. I ask Ross what is car sourcing? ‘‘Our business is simple. We find cars for people. We don’t carry stock and so we are totally impartial.’’ While they sell all makes of vehicles, Ross himself is a Land Rover man through and through, and tells me that 40 per cent of his business involves green oval badged vehicles. Further proof of his Landy love is his replica of the two millionth Defender. Remember the one with the external map of Red Wharf Bay and the many unique features? Instead Ross has used a topographical map of Snowdonia, a place that is special to him and his family, but other than that they're pretty identical. Also in his personal garage is a former hard-top 90 that was converted into a NAS 90 for his brother. 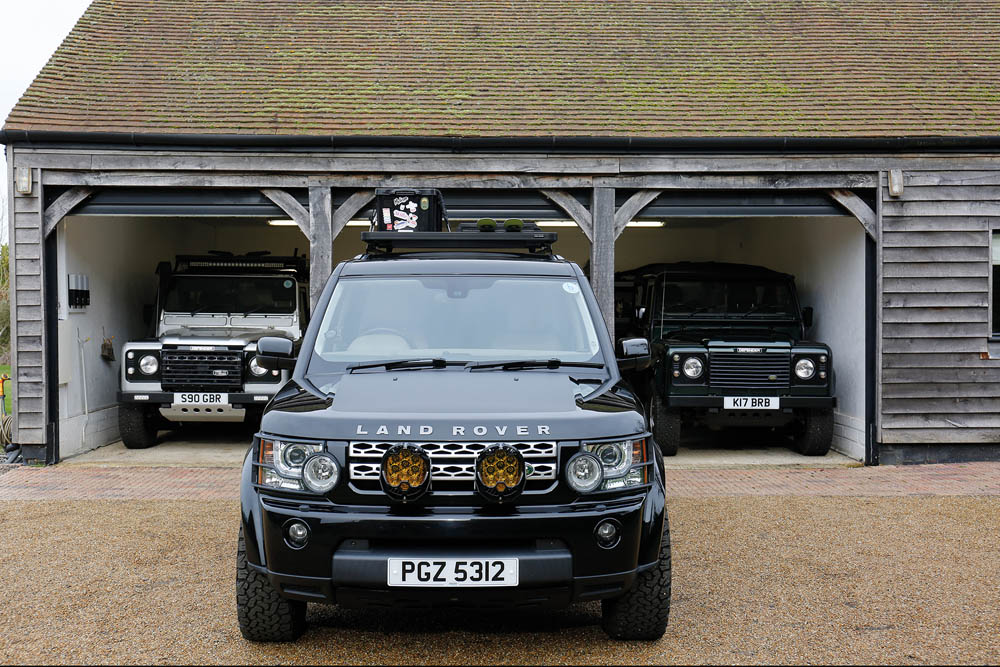 Ross of Burcham Car Sourcing is a Land Rover fan himself – check out his two Defenders. Photos: Patrick Cruywagen

Ross likes a challenge but when Olly asked him to find a Discovery 4 5.0-litre V8, he knew he had a challenge on his hands. Remember they were only sold with that engine in markets such as Japan and South Africa. Ross explains why Olly wanted that specific engine.  ‘‘The engine is bombproof. In fact, I think that it is a little over engineered for a D4 – it is nearly 400 hp in standard format, yet its silky smooth.’’

Just before Christmas of 2019 Ross struck gold. Someone in Ireland was selling a standard 2010 Discovery 4 5.0-litre V8. It had only done 60,000 miles and had just been imported from Japan. The Irish are always up for a deal and Ross obliged.

Sit in a 2010 Discovery 4 and then climb into any 2020 Land Rover product and you will quickly notice how the D4 has dated. As Olly is not your standard customer, Ross set about customising and personalising the Beast of Meribel. As I only get to see the handover to Olly, Ross kindly shows me an image of it standing in front of Titanic Belfast from when he collected the vehicle. Back then the building looked more impressive than the Land Rover, now that Ross and his team have transformed the D4, it looks more impressive than the Titanic Belfast. My architect uncle might disagree with me on that one.

So, what has changed or should that be what has not changed? See the impressive list of modifications below, but for now allow me to touch on some of my favourites. First up is the Front Runner Slimline II Discovery three-quarter roof rack. I have one of these on my Defender and with the wind deflector you don’t hear it. Olly also needed the Front Runner ski carrier and useful tie-down rings. They say the devil is in the detail. Instead of using a traditional wolf box Ross sourced higher standing ones that take a North Face duffle bag. 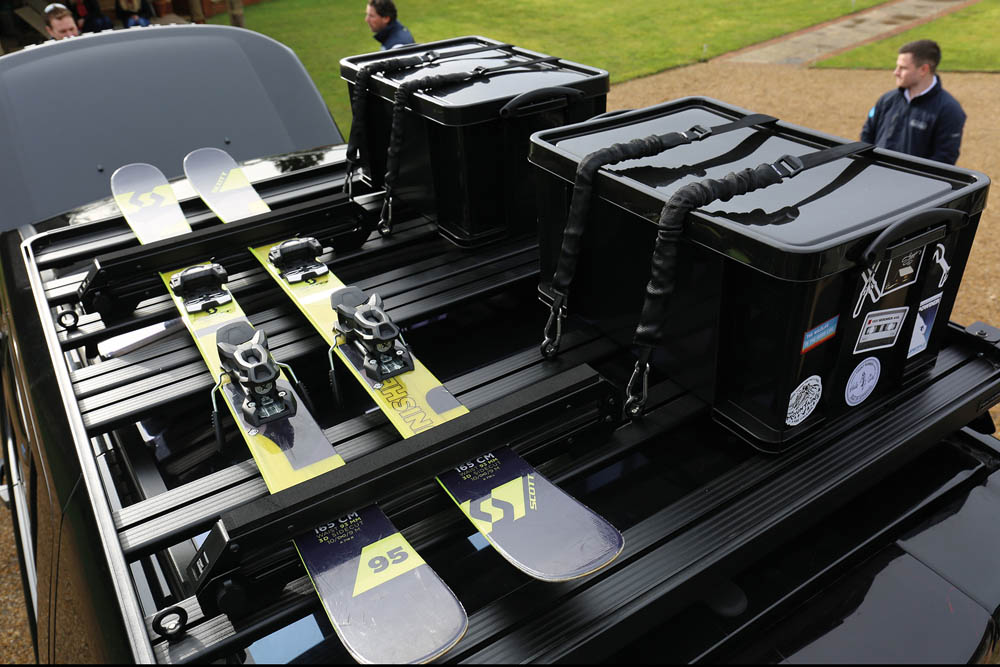 Frontrunner roofrack carries all the essentials

As Ross is all about the personal touch and finer detail, he has plastered the boxes in specially-made stickers that best reflect Olly's various passions such as travel and hitting the slopes. Olly also has the right gear to carry surfboards, stand up paddle boards and windsurf boards on his rack. Last but not least there's a bottle opener on the rack. 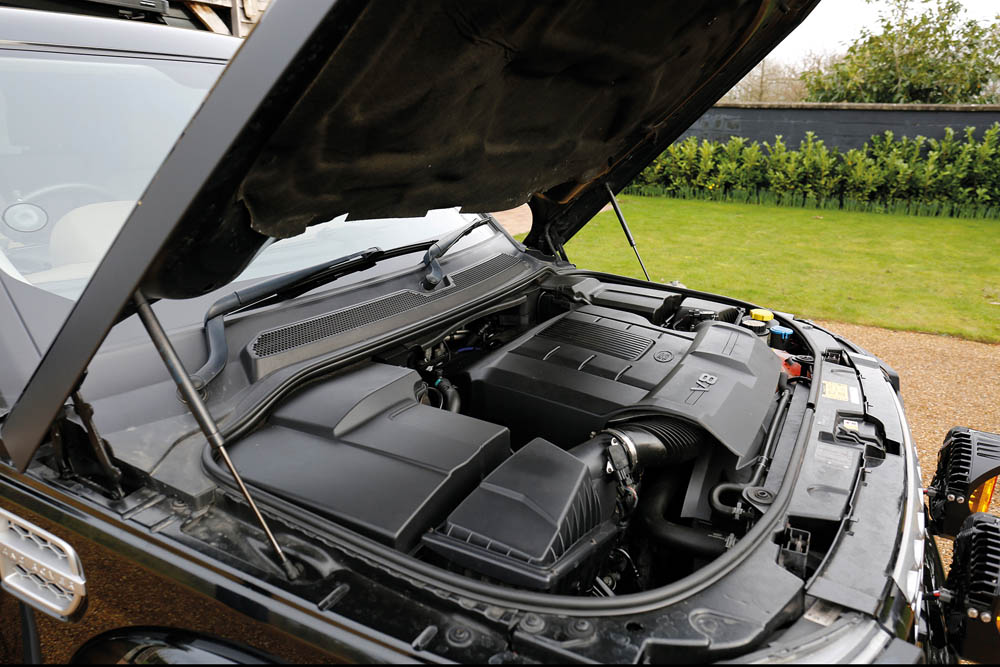 Now, if you have a big V8 engine you want people to hear it, right? This is the Beast of Meribel after all. Remote controlled exhaust valves were fitted without Olly’s knowledge so when he was handed the remote for the first time and his eight-year-old son Ralph flattened the accelerator (yes it was in neutral) it was like ACDC were playing Thunderstruck. I am glad I live in a peaceful English village and not in Meribel. 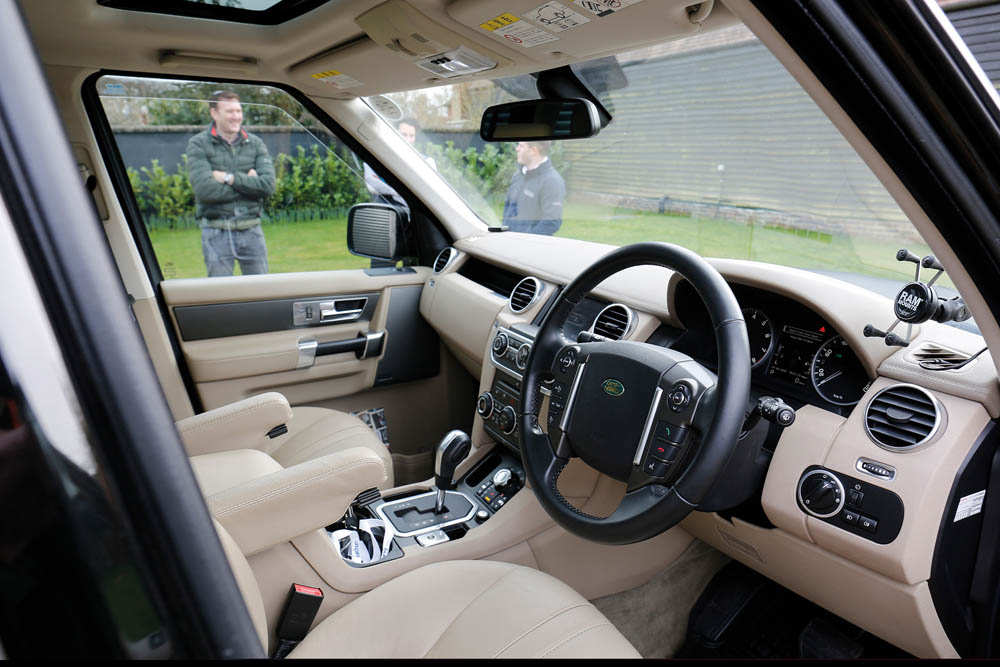 The very plush and comfy interior of an early D4

As for the interior Ross did what was needed when transporting kids and wet ski boots. Rubber mats all round, a decent heavy-duty boot liner and an entertainment system for the kids so that they can watch movies while on the long road to Meribel.

If you’re going to be driving in the French Alps then you need decent tyres and protection. Black Tuffant steel wheels were covered in BF Goodrich All-Terrain T/A LT265/60 R18 tyres. They will definitely do what is needed in cold conditions. Then if Olly needs to power through a snow drift he can call on his Front Runner sump guard while the rock and tree sliders will also help to protect the beast. I find the latter useful for accessing the roof rack though there is a ladder mounted on the top section of the split door.

There are spot lights and then there are Baja Designs spot lights. If they use them on the Baja 1000 race then they have to be good as some of the racing is done in the dark and the dust, of course.

As we stand around the finished product I ask Olly why a Land Rover? ‘‘When I was much younger I did a trip from Alice Springs to Darwin in Australia in a V8 Range Rover Classic. There were six of us in it and we had the adventure of a lifetime in the Aussie bush. I took a bit of a tumble down a waterfall and required a few stitches in my leg but we made it to Darwin alive and happy.

‘‘Originally I wanted a classic Land Rover but eventually I decided to go for something a little more practical.’’ Just about everyone has a Land Rover story to tell and more often than not it’s a memorable one, just like Olly's. 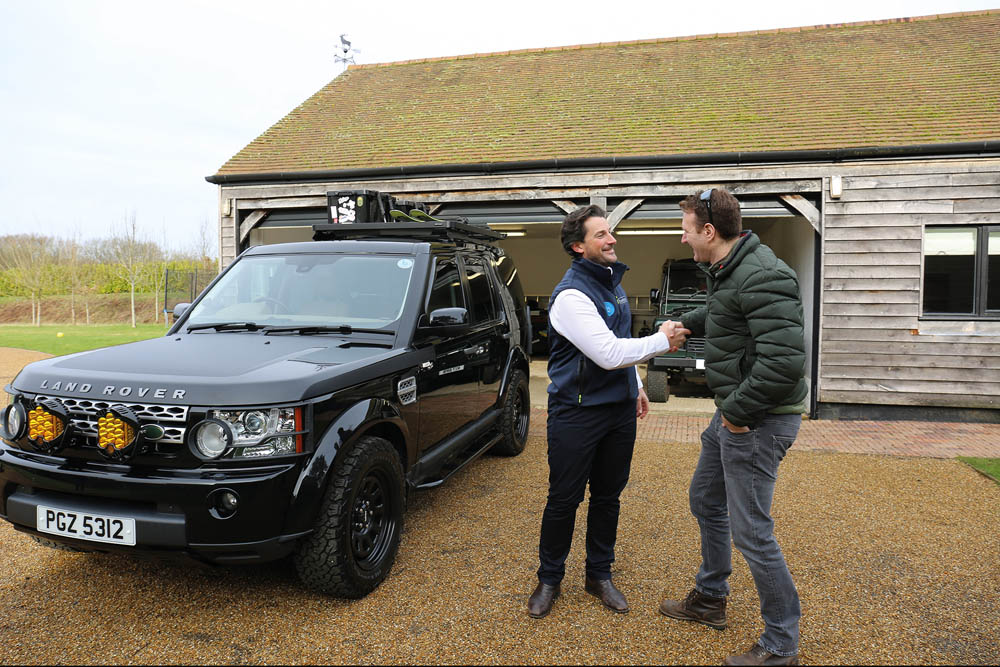 We're surprised Ross wanted to hand over this car

Judging by the smiles on Olly and Ralph’s faces, they are over the moon with what Ross has done. As I walk around the Beast of Meribel for a final time I have to say that I too am impressed. Ross has taken an unusual standard D4 and turned it into a desirable family transporter.

The final two lines of the chorus of that earlier Stones' song I mentioned go a little something like this: ‘But if you try sometime you find, you get what you need’. Well Olly has certainly gotten what he needs and while it’s not a classic I don’t know of any other Discovery 4 5.0-litre V8 in the UK, or one that's this cool. Can anybody prove me wrong? 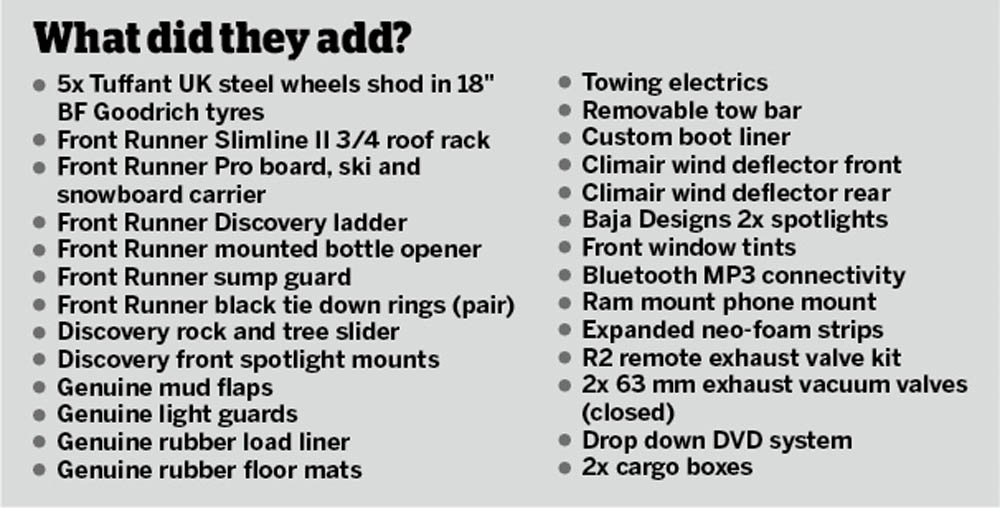 Looking for something a little special or different? Car finder extraordinaire Ross Burcham will find it for you. For more details call 01428 870011 or see burchamcarsourcing.com