Editor Pat gets behind the wheel of Bowler Motor’s version of the new Defender. They had to use a SWAT team to get him out

When Land Rover launched the new Defender they called it the most capable Land Rover ever created. You and I both know that the ‘most capable’ will not be able to challenge for motorsport honours at something like the Dakar Rally, Finke Desert Race or Desert 1000 in its standard format. Enter into the fray Bowler Motors, founded in 1985 and recently acquired by Jaguar Land Rover, this British company has been building magnificent off-road racing machines for major events such as the Dakar Rally and French Baja.

In the past few months I have spent a lot of time off-roading in the new Defender, this included stints in the new V8 (see page 64) as well as my favourite of the lot, the six cylinder diesel. Now I find myself at JLR’s Fen End facility for something top secret and a dare I say it, very different, a first drive of Bowler Motors rally version of the new Defender. 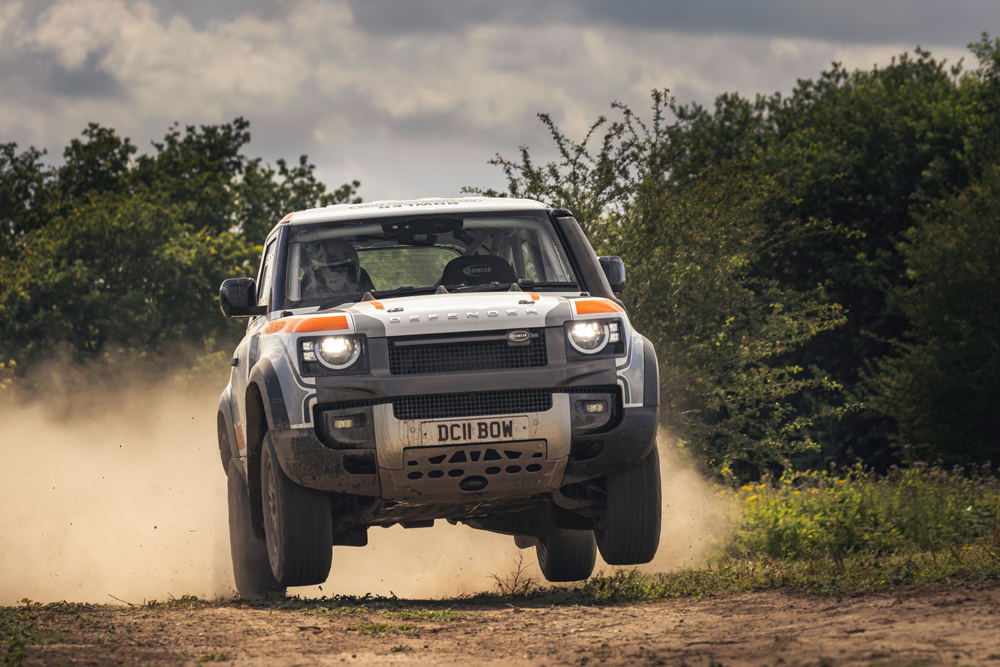 Why have they done this? This Bowler Motors rally Defender will be competing in its very own championship (the Bowler Defender Challenge series) starting in March 2022 and if you have a spare 100k lying about then you too could take part! That is what one of these vehicles costs and this includes entry into the seven event UK championships. If successful could we see similar events popping up in other parts of the world where Land Rovers feature prominently?

As I climbed out of my old 1998 Defender 110 and walked into the pits next to the gravel track I saw Bowler’s rally new Defender for the first time. I must say it reminded me a little of the beefed-up-to-the-max Minis that take part in the Dakar Rally. Except this was a Land Rover Defender of course and it really did more than look the part. Now before you think I bet it has a V8 engine in, think again old chap. Our friends at Bowler used a short wheel base Defender 90 with a 300PS Ingenium 2.0-litre turbocharged petrol engine as the starting point of their creation. According to Bowler their challenge was to try and see how little they could do to the new Defender before it was in some sort of shape to take part in the single series championship. 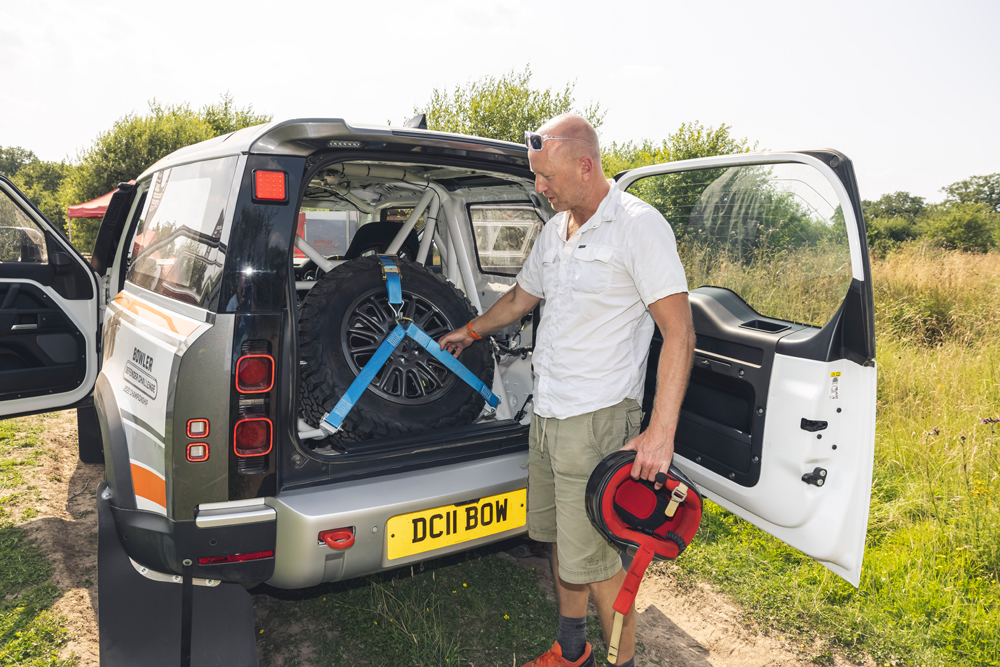 As I took a walk over for some closer inspection it quickly became apparent that this was not at all like the new Defenders I have driven thus far. Let’s start at the front, the two side auxiliary radiators had been removed, there was also a modified front end to increase airflow to the cooling system. Then they had added extra Laser Lamps lights to the front and I bet my old Defender that some new Defender owners will be doing the same. The rear roof spoiler also houses additional lighting which can be useful during night stages. Then they cut 75mm off the bottom of the doors, this allowed for the fitment of the full-length and side to underbody protection inserts. These new Defenders are tough, I recently hit a fallow deer in one and it did not do much damage, now Bowler have made small mods to further stiffen something that is already pretty rigid and safe.

The other major external change were the 18-inch rally wheels shod in BF Goodrich All Terrain T265/65R18 tyres. Each of these Defenders had to be stripped back so that Bowler could install a full FIA-standard roll cage. As for the front and rear subframes they provide additional bracing for the racing suspension set-up. Thanks to the stiffer coils and Fox racing shocks it has an increased ride height of 25mm. All done in the need for speed. 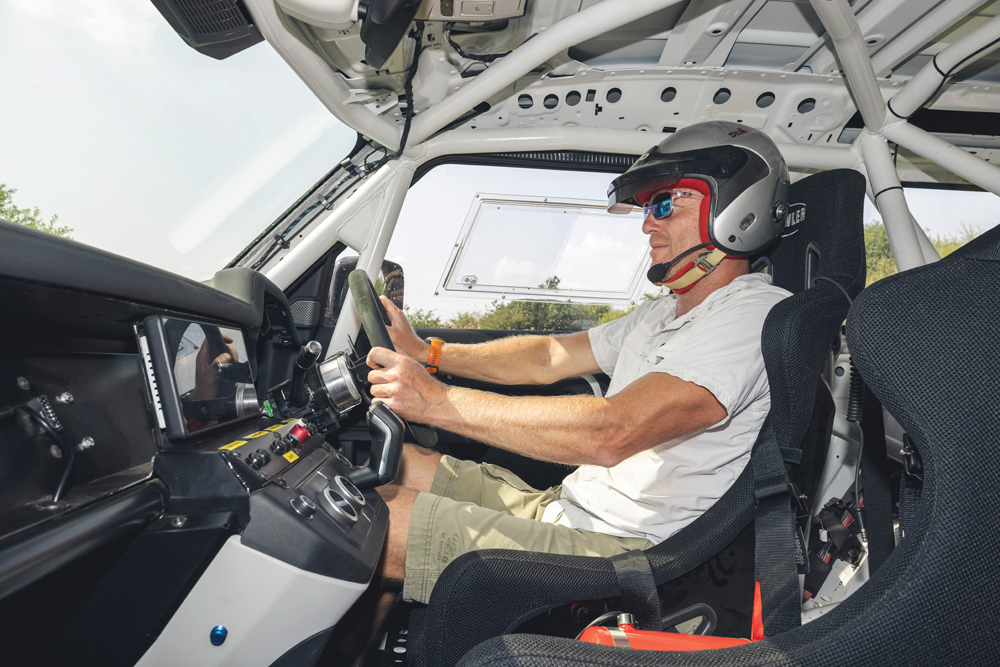 I was so excited and nervous after climbing in to take it for a test drive. I noticed that the gear selector has been repositioned for easier access. There are a few new buttons that will activate things such as the electric cut-offs, fire protection and additional lighting of course. I was told that they did try an Evoque steering wheel when building the prototype but they instead went for a smaller black racing wheel and quality competition race seats.

It just roared to life with the push of a button and I was off, I used the first lap as a sighter lap just to get used to the vehicle. It has column-mounted paddle shifters (not normally available on new Defenders) but I just left it in S mode to focus on staying on the track. 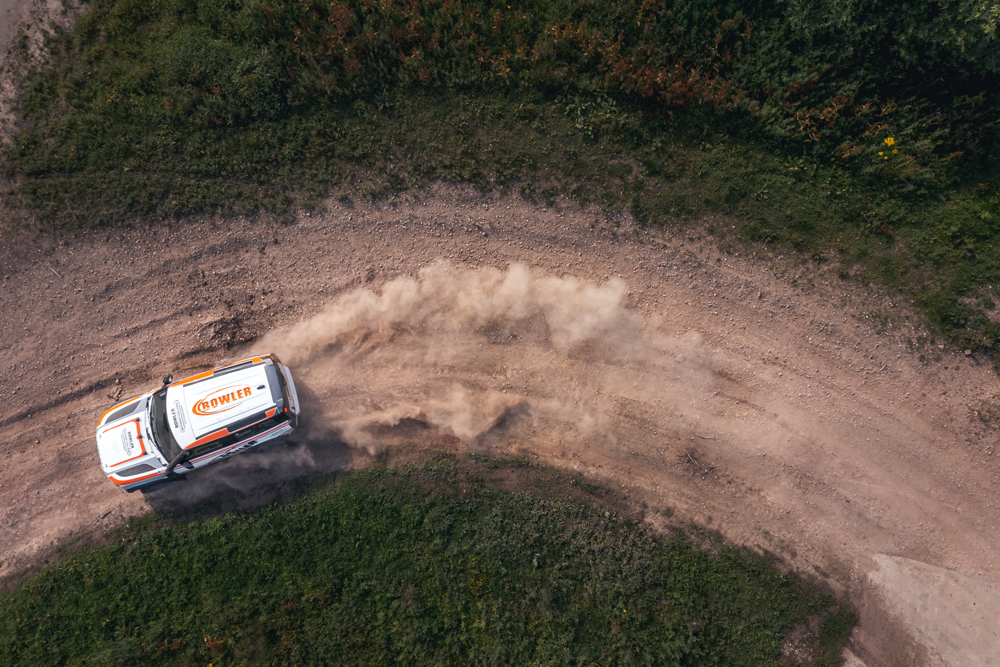 The more time I spent driving it the faster I went of course as I got more confidence in the Bowler and my abilities. On the long stretches I floored the accelerator. Ping. Twank. Goomph. The rubber churned up hundreds of stones as I happily speed along. The handling in some of the tighter, slower forest sections were an absolute pleasure to drive and you could really throw the 90 about while still feeling pretty much in control. Just before the jump there was a very rocky section which too was hit at best speed. The Bowler just chomped it all up. As we took off at the jump I thought to myself that this is better than sex and single malt. After a few laps I was told to return to the pits. I don’t think I have ever had some much fun in a Land Rover before.

That my friends is what Bowler’s rally new Defender is all about really. Having fun while racing and making motorsport accessible to those that have £100,000 to spend. So it does come at a price of course, but whoever buys it is in for some fun times. 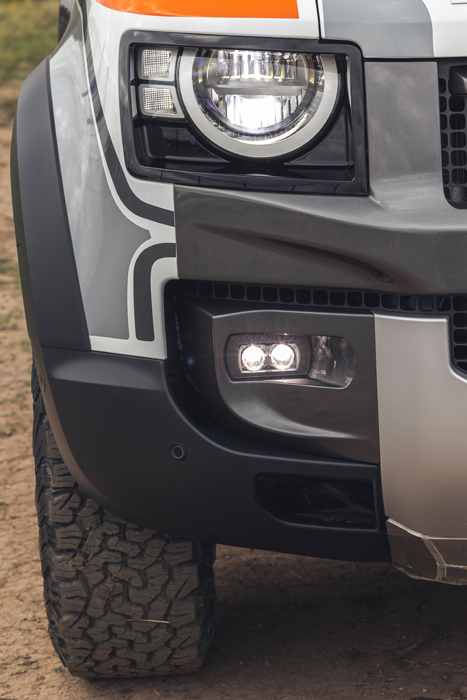 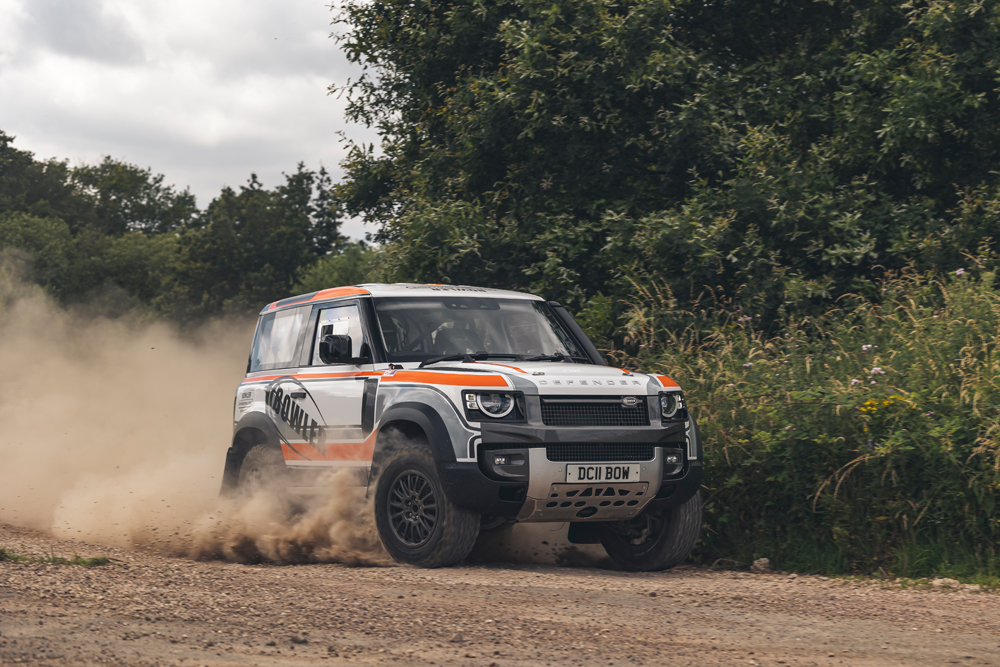 Fancy a go yourself?

Packages for the 2022 Challenge start at £99,500. This includes: a Bowler-prepared Defender Challenge car, entry into the 2022 series and event support. See bowlermotors.com for more.