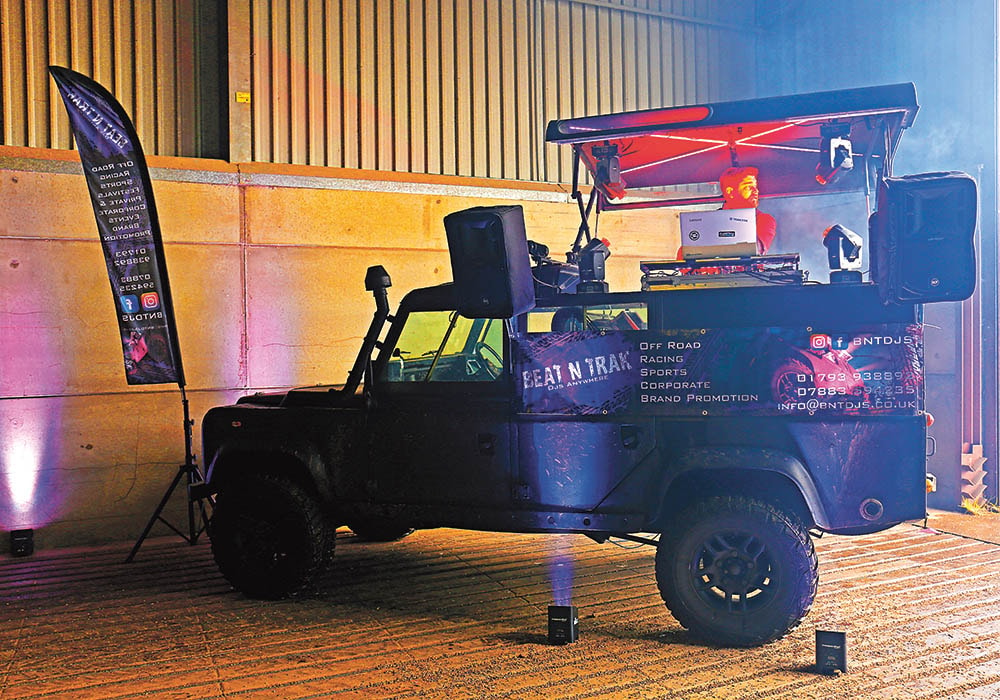 The trend for vintage food trucks are taking the festival scene by storm. They are also fast becoming the must-have accessory at weddings, but what about a mobile DJ service? You do not see many retro vans from the likes of Citroen, Fiat or VW with someone hanging out the back beat matching, mixing and scratching, but surely, the best music venue is one that can go anywhere? That was certainly the thinking behind Liam Elliott’s new business venture – a Defender pop-up DJ booth.

“The benefit of a portable DJ booth is that I can be so versatile. I can play at corporate events, action sports competitions, weddings, birthdays, festivals, you name it – there are not many places I cannot access in the Defender,” says Liam. The 32-year-old has been in the entertainment business all his life – after leaving school he started his own company supplying equipment to bands and nightclubs, which he still runs, alongside hiring himself out as a DJ. 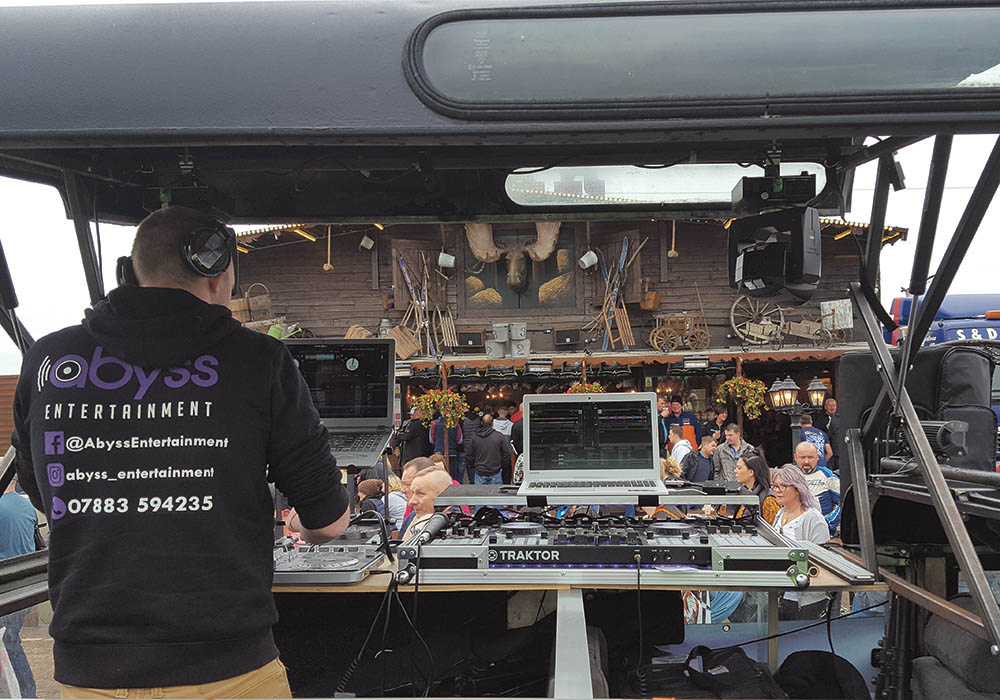 Liam doing what he loves best, mixing beats in the Defender

His other passion in life are Land Rovers, having grown up with them, and the idea of combining the two was not a recent one – it’s been in the back of his mind for a while. He takes up the story: “We were doing an outdoor gig about ten years ago, and I temporarily hung a load of lights from the side of the roof rack on my Defender while we were setting up and the idea suddenly came to me. The only thing stopping me was the thought of cutting the roof off.

“The aim was to get another vehicle to specifically convert, but sadly a couple of setbacks – such as a load of equipment being stolen which wasn’t paid out by the insurance company – meant I had no choice but to use my daily. For a school runabout it is now quite the party trick.”

Although Liam is very hands-on having restored many Defenders in the past (after learning to weld on the family’s Discovery, no less), amazingly he had no real plan before he started the conversion and he did it all on his driveway – much to the confusion of his neighbours! “It was as crude as you can imagine – armed with that sage old advice, measure twice, cut once, I took an angle grinder to the roof. It was a case of thinking this looks like the right lines and then committing. I sourced a spare roof in case I messed it up.

“I guess a degree of planning went into it, but rather than discussing the design with a fabricator and then getting a specialist to carry it out, it was all in the back of my head or various ideas jotted down and placed in lots of files on the computer that I can never find. Most of the prep went into the creation of the box section in the roof, as I still need to use the rear seats it could not interfere with anything, and the hinges for the struts, which needed to be over-engineered to keep the roof stable when it was raised. This is particularly important if it’s windy for example,” he reveals.

Liam made the all-important cut from six inches behind the B-pillars to the tailgate, so the front section of the original roof remains intact. On the inside, two rails run right down the length of the vehicle on both sides to remain structural rigidity. The height of the vehicle with the roof closed is 86 inches but with the roof opened 115 inches, although it is only restricted to that because of the custom-built gas struts – it could go significantly higher. It is quick and easy to operate but Liam plans to motorise it later this year so that the roof goes up at the push of a button for convenience and cool ratings. “We timed the set-up from start to finish when we supported a charity run as we had to DJ at two locations – at the warm-up area and then at the start-line – and it took just six minutes,” he explains.

Inside, the two seats up front and the three behind are now swapped out for a leather, heated set from a Saab, while the two which were each side in the rear have been removed for storage with side panels from a SWB Series II bolted on to add a bit more security. Liam explains: “Effectively we’ve ended up with a commercial model – my mates and I did this to all our 110 Station Wagons – we were doing it long before Land Rover was! There is enough room in the back now for two DJs and two sets of equipment so we can do a back-to-back set. It is tight but only when you compare it to a nice big DJ booth in a nightclub.”

What else has the Oxfordshire-based DJ done? “There are a couple of brackets for speakers on the side, which are hardwired into a bespoke cabinet, along with all the other cabling, which sits in the back, and the interior lighting which is wireless can be changed to match the uplighting  at a set, but most of the other changes are standard Land Rover mods. To that end, the suspension is uprated to Ironman coil springs and Koni shocks and I have fitted a set of mud terrain tyres." 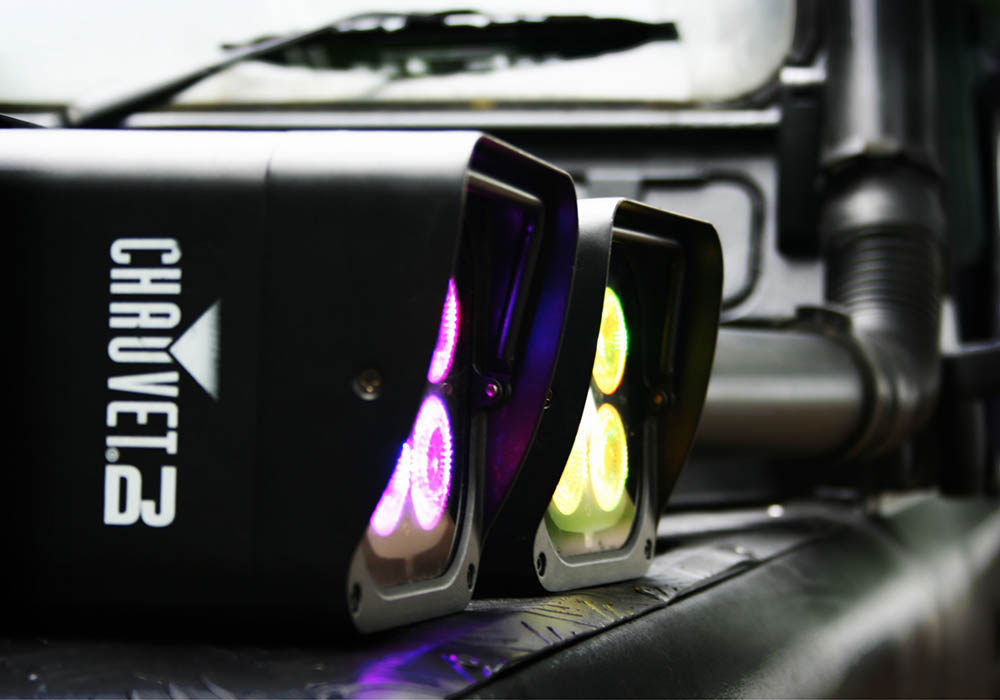 This Defender can illuminate an evening event with smoke, lasers and uplighting

While many people have questioned why Liam did not use a newer model, he says there is a distinct advantage of converting a vehicle he has owned for over a decade, as he knows every single nut and bolt. “I know this vehicle like the back of my hand, and it doesn’t matter if I break a component – that’s why there’s still a spare roof down the side of my house,” he laughs. “I’ve been through about five different engines and the same number of gearboxes, but that’s often down to a broken part and it’s just easier to fit another lump because that to me is a trivial job.”

Registered in 1984, this Defender 110 is now equipped with a 200Tdi (and LT77 ’box) – a far cry from the non-turbo diesel engine that was under the bonnet when Liam acquired it from his step dad for the not-so-princely sum of £100. “It could barely pull its own weight in third, it had no radio, the interior was all torn and the original blue and cream paintwork was peeling off. To be fair it had a hard life. In my hands, it has been constantly changing and it is one of those Land Rovers that will never be finished. It’s a bit like Trigger’s old broom; except that it does have some original parts, but even they’re becoming fewer and farther,” he confesses.

All in all the conversion took Liam just a couple of months although if he was to do it again he thinks it could be done in less than half that time as where it was a case of almost making it up as he went along he knows what he is doing now. “It was a bit of a challenge and people were sceptical – as was I, if I am honest – but once they saw the finished result they better understood my vision. It is a constant evolution and I’m forever trying to stop it from leaking, but I am pleased with the outcome, especially as the only job that I did not do myself was the respray, which is done in U-Pol Raptor,” he explains. The tough, protective bedliner paint, with its satin black finish, is not only practical for events, with people often dancing on the bonnet but it helps to make it look tough, too.

Liam markets the Defender as the ‘coolest and most useful, unique and versatile DJ booth you will every book’, and that pretty much sums it up although it is not easy convincing everyone of its USP. “It is sometimes a challenge getting people to see the benefits of it compared to an ordinary disco. There is a big difference though. Take for example the Hydrogen Weston Beach Race – on the Friday and Saturday, we were playing by the bars and on the Saturday we were on the beach surrounded by 20,000 people – you cannot do that with an ordinary disco. Not only can we go anywhere – indoors if it has access, or outdoors – but we can move to various points over the course of an event, which is really advantageous for say a festival.” 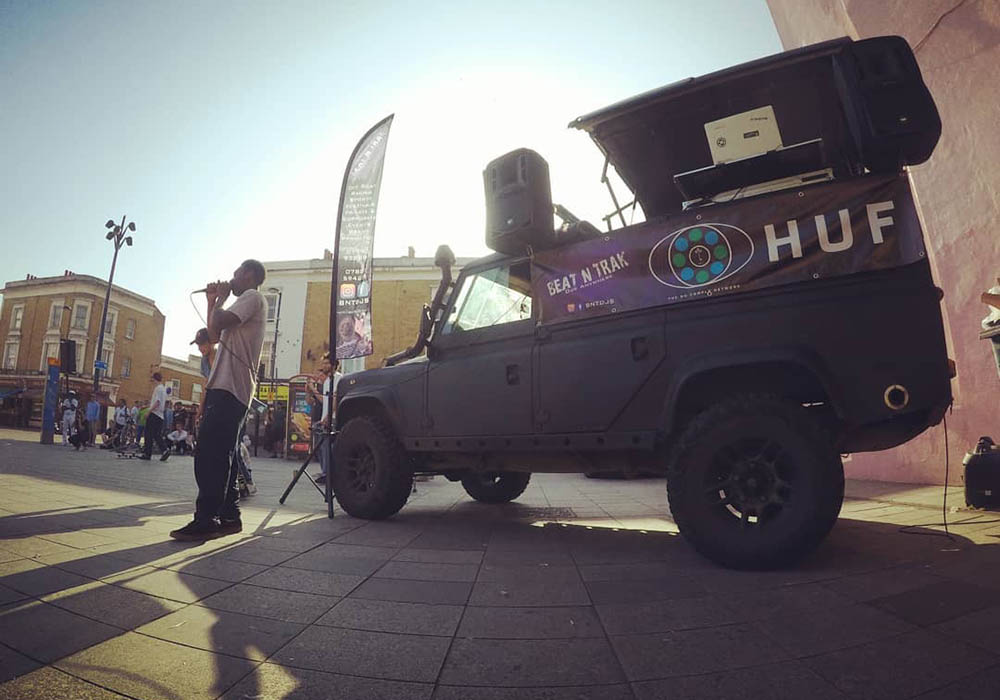 If you're looking for something unique and versatile for your event, this ticks every box

So, how do people react to the Beat N Trak DJs, as his Defender business venture is better known? “You get the people that hang around dancing for ages like they did at the Restricted Forest Festival and didn’t bother with any of the other stages – in fact, we gained the nickname the burger van that wasn’t a burger van that weekend,” he laughs. “Or at family events like the Uffington White Horse Show you get attention from both ends of the spectrum. From young children and teenagers who love it, as they have never seen anything like it before, to the older generation who are Land Rover purists and it reminds them of an old Defender that they once had, and now they have a Series III. You normally always get their life story.

“On the whole, people love us. In fact, the only complaint we’ve ever had was from an older gentleman who couldn’t properly hear the aerobatic display above our music.” And the biggest praise? “Well, that’s easy,” answers Liam. “We get compared a lot to the event vehicles that Red Bull have as a lot of them are based on Defenders, and given how brilliantly executed they are it’s a huge compliment.” We are guessing the second honour Liam, is a feature in your favourite Land Rover magazine? "That goes without saying," laughed Liam. 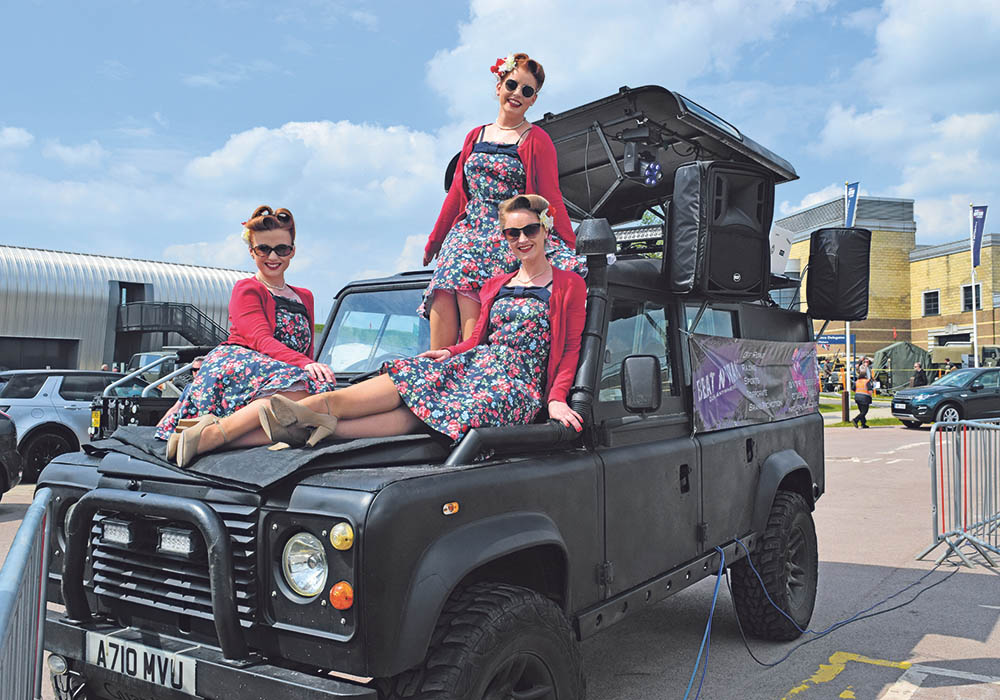 Beat N Trak DJs are a great entertainment choice for any event whether private, public or corporate based. They have three pricing tiers as a guide designed to suit the most common type of public booking and their day rate covers up to eight hours of entertainment. For private bookings or advertising details, please email [email protected] or call 07883 594235, and for more information visit bntdjs.co.uk/.

MOBILE from £650
Perfect for fast and effective pop-up entertainment with the possibility to move from point-to-point.

PARTY from £800
Their most popular service, perfect for busier, all-day events, after-parties and intimate alternative stages.

FESTIVAL from £950
Full-size sound and lighting rig set to run into the night; a unique way to entertain larger crowds for longer times. 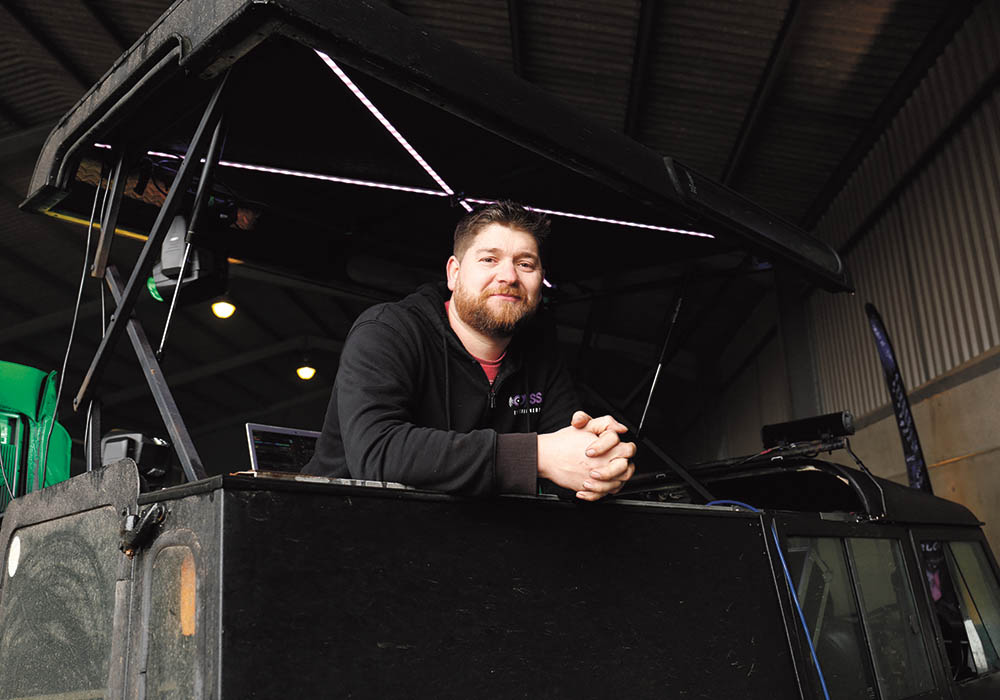