Ninety-eight pairs of deep brown eyes look up as the elderly leaf-sprung Land Rover bumps and jolts across the field towards them. It’s feeding time on the farm and this herd of red deer, although domesticated, still have much of the natural caution of their wild brethren.

They wait until the 1978 Series III comes to a halt before they edge towards the truck, checking out the human occupants. In the cab of the 109 is farmer John Savory (84) and standing on the wooden platform at the back is his son, Richard (55), both familiar faces to the deer, which now trot forward confidently. All 98 are hinds, heavily pregnant, and although they’ve been grazing on rich Norfolk grass all day, they need the extra protein boost from the supplement that Richard is scattering across the meadow.

It’s a timeless scene and one that the Series III has witnessed many times in its 40 years, ever since it began life on the other side of the world.

The Savory family’s Land Rover started out as a CKD (Completely Knocked-Down) kit shipped from Solihull to Wellington, New Zealand, in early 1978. Once it arrived there, it was build up into a long-wheelbase truck cab, which was purchased by John in November that year. 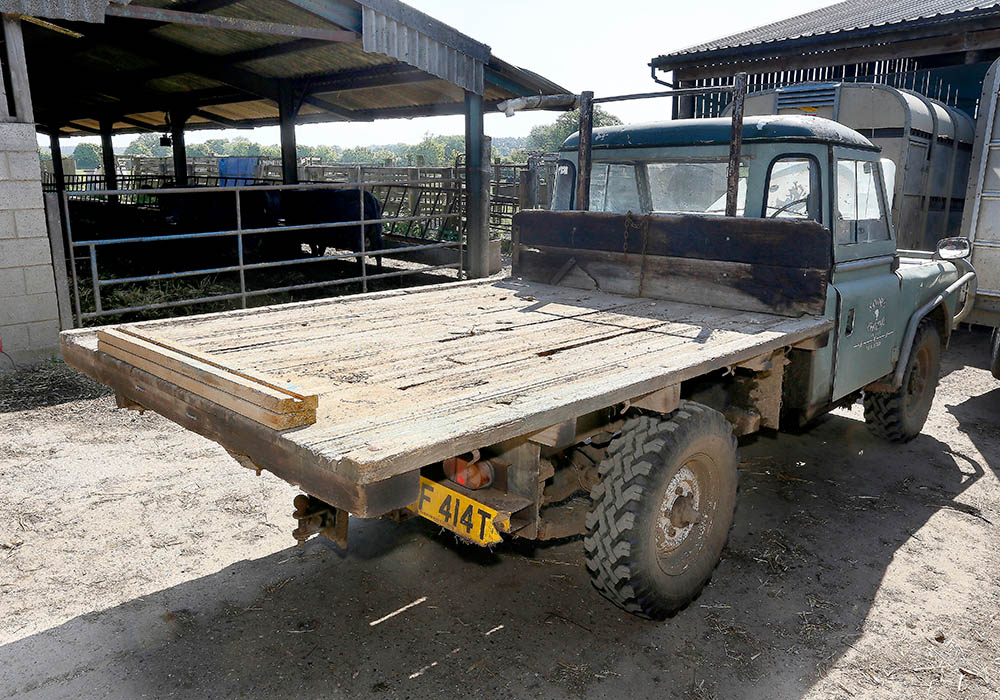 John built it up into a long-wheelbase using wood from his old forest in New Zealand... 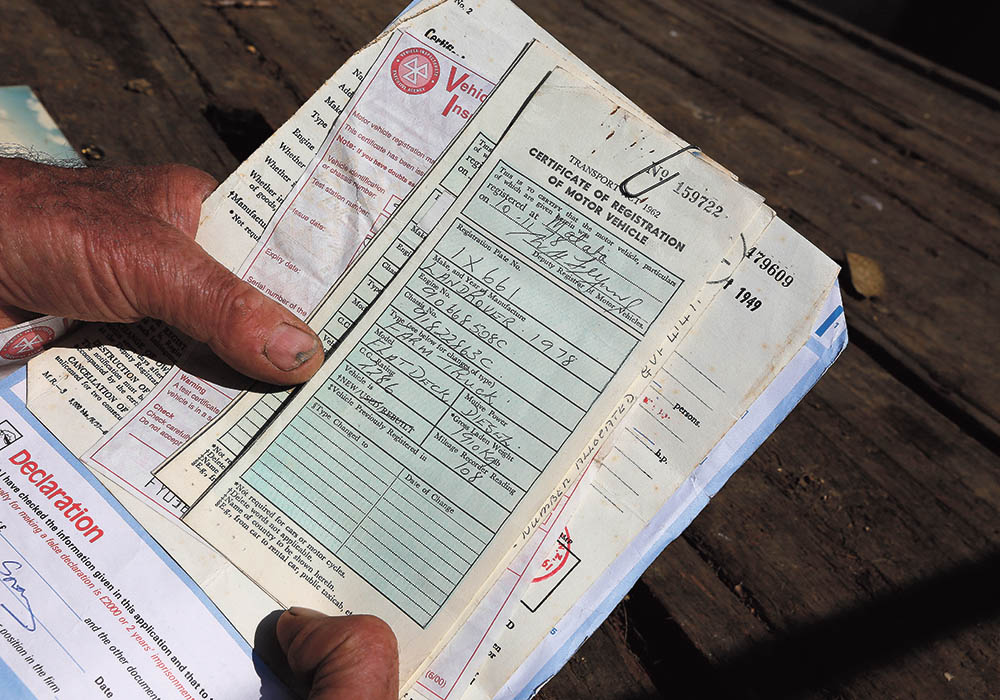 ... having started out life as a kit

“It was very basic but that’s what I ordered,” recalls John. “All New Zealand farmers wanted was a cab and a bare chassis that they could build their own wooden platform on, to carry feed and building materials around their farms.

“I built my own trayback and wooden frame for it from wood I had cut down from my own forest. It was a giant rimu tree, about 100 years old. It’s a kind of red pine, which is much tougher than the pine you get in Europe because it is hard, with a fine grain. All the beams from our house I built in New Zealand were from the same tree.”

Although born to a Norfolk farming family, John emigrated to New Zealand as a young man, in 1954. He started out by helping on a sheep farm, then bought a farm of his own. “I started off with 600 acres and ended up with 1000 acres of grassland and 500 acres of arable fields,” he says. “Sheep were our main business but we diversified into deer farming in the 1970s, because venison was worth a fortune then.”

Their farm was in the aptly-named Bay of Plenty on the east coast of New Zealand’s North Island. The diesel Series III was the ideal workhorse, as John explains: “We’d use it for taking hay around the farm, feeding the animals and carrying fencing materials. I fitted a hand throttle inside the cab to control the PTO [power take-off] which powered a sprayer. I also used it to drive the car itself on tickover, while I stood on the back, throwing food to the animals. I could do that safely because the fields on the farm were vast.

“Wild red deer had been introduced to New Zealand in the early 1900s and found it to their liking, because the population expanded rapidly, and soon they were seen as pests. The New Zealand government had to employ marksmen to cull them because they were denuding the native vegetation.

“At that time the German market for venison was very strong. Catching them wild was a lucrative business because they were worth £1500 each in the 1970s – and that was lot of money back then. We caught five one night, which was enough to pay for me and my whole family to come back to England for a holiday.”

By then, John was married and had four sons, including Richard. Business was booming on the farm and they had 3000 ewes, 800 lambs, 200 Aberdeen Angus cattle and a 30-strong herd of red deer that they had caught wild and were now domesticating. The future looked bright – or it did.

“Wool was still our main business, but in 1988 the market was about to collapse and I decided to return to England,” explains John. “Apart from the family, all I brought back was my Land Rover, some furniture, a microlight aircraft and some rimu wood to make a few doors.

“I drove the Land Rover straight off the docks in London and took it to Norfolk, where it has been ever since.”

John set up a new business as a fencing contractor, but after so many years in New Zealand he couldn’t bear to sell his old farm down under and rented it out instead. He soon changed his mind though when he returned to New Zealand five years later. “My tenant was letting it go to ruin,” he says. “I was heartbroken and decided to sell it.”

Back in England, the Savorys’ new life in the old country was looking bright. They bought a farm in the Norfolk countryside near Fakenham, and built up a flock of sheep as well as a herd of cattle, which graze on lush meadows along the Wensum Valley.

As the family business expanded, the trusty Series III workhorse was always at the centre of things. It was popular with all the family – not least because Richard and his brothers learned to drive in it.

Although the family now have two Defenders – a ten-year-old Td5 110 with a tipper back and a 1989 ex-electricity board turbodiesel 127 – the Series III still works hard on the farm.

John, who has driven it daily for 40 years, admits it is his favourite: “It has never, ever let me down. There has been nothing done on the engine since the day it was built. The engine, gearbox and drivetrain are all original. But it has had a new rear chassis, because it rusted in the English climate. They hardly rust at all in New Zealand, because there isn’t any salt on the roads. 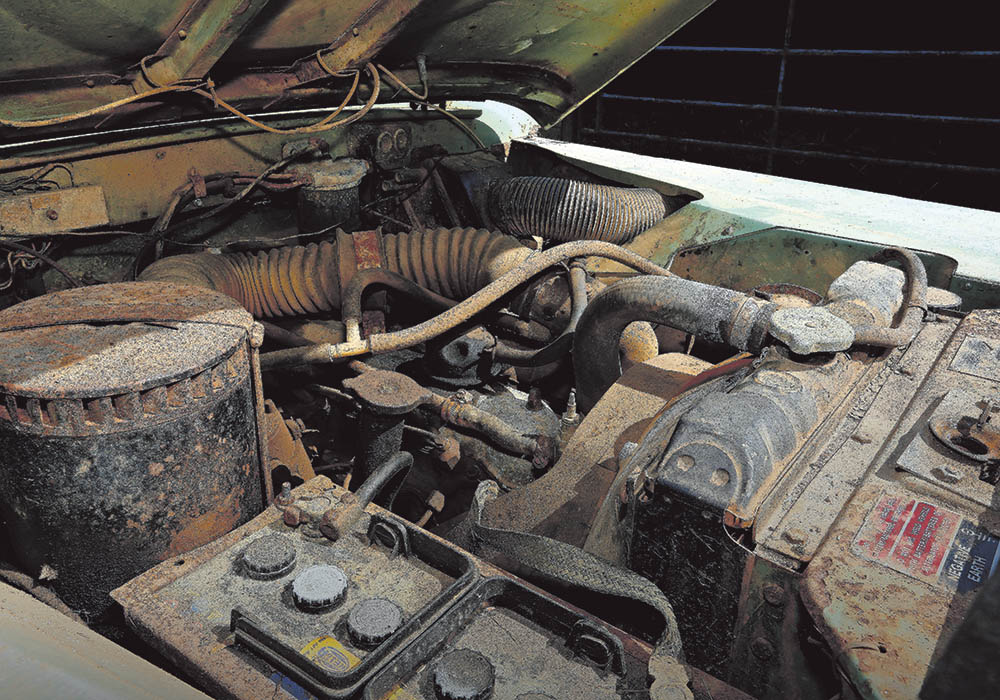 The engine, gearbox and drivetrain are all original

“There was a time when a New Zealand farmer would always buy a Land Rover, and wouldn’t dream of buying anything else. You needed something for the terrain – on our farm it was pretty rugged and more like Wales than Norfolk. But now they buy Toyotas and Ford Rangers, which is a shame. They won’t be around in 40 years, that’s for sure!” 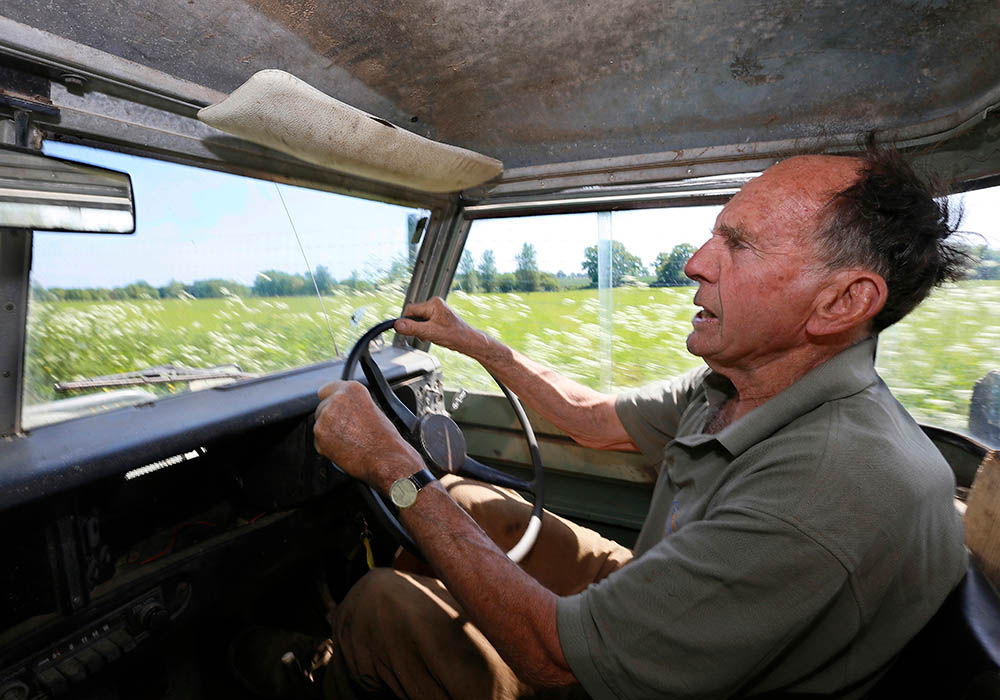 John has driven this SIII daily for 40 years

These days the trusty Series III is a vital part of the daily routine on the farm – especially feeding the sheep and the herd of red deer, which the family decided to breed, using the experience gained back in New Zealand.

Says Richard: “The red deer is the UK’s largest native deer. It has been eaten in this country for centuries, but deer farms didn’t really appear until about 30 years ago. They are quite recently domesticated compared to other farm animals.

“Deer are easy-care animals. They look after themselves. The hinds usually produce one calf a year, and breed for 15 years. They are also very good grazers of grass, because unlike sheep or cattle they nibble from the top down and, let’s face it, they are handsome animals to have on the farm.

“Venison is a very healthy meat to eat. It is low in fat and high in protein, which means that if you suffer from heart disease it is the safest red meat to eat. There has been a huge upsurge in eating venison, both wild and farmed. It used to be exported to Germany, but now most is sold in this country. Most of ours is sold by Waitrose.”

Diversity is the name of the game for farmers these days and the Savorys are certainly at the forefront. Another family business is The Sheep Show, which is run by Richard and his wife, Helen.

“The Sheep Show is a travelling road show about sheep and the story of wool,” says Richard. “We go to agricultural and country shows – 130 different shows each year – and it’s a mix of education and entertainment. We bring along nine different breeds and explain the characteristics of each of those breeds. Some of the show is set to music. It is a big operation that involves travelling the country in four articulated lorries.”

Meanwhile, the faithful Series III leads a quieter life. In 40 years of farm work it has only covered 28,906 miles, which is little more than the distance from Norfolk to New Zealand and back. But being used daily has taken its toll: the seats are threadbare and the paint is faded. Even the distinctive wooden trayback that John built from rimu wood four decades ago is starting to look a bit tired. 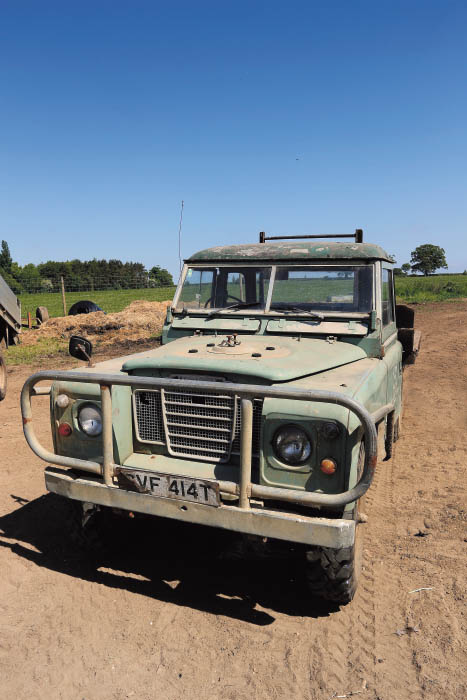 This 1978 SIII bears the scars of its hard working life

“It isn’t registered for the road any more, because we only use it on the farm,” says John. “There’s nothing better for feeding the animals and carting hay around.

“I keep meaning to get it restored and this winter I will. I don’t want it to look like it’s just come out of a showroom, because it was never anything like that.

“It was always an honest, hard-working vehicle and that’s what it will always be. I’m not looking for shiny, just tidy. It’s always done me proud and now I’ll do it proud. You’ll see.”