In 1993 Honda needed a 4x4, but only knew cars. Who did they turn to for help? Alisdair Cusick looks into their solution, the Honda Crossroad

No matter how long you’ve owned or simply been interested in Land Rovers, and think you’ve seen it all, there is always the odd rare car or two that turns up every year seemingly out of the blue. Like 2014, when NCX 231H, the first line-produced Range Rover, was restored.

Then there are the other, perhaps less headline-grabbing cars that appear. When I read about a certain Honda Crossroad in the UK earlier this year, I wanted to know more. It is unusual because though it was made in the factory at Solihull, it was destined for the other side of the world and badged as such; a Honda for Japan. The owner also had two of them, so what were they doing over here?

The seeds were originally sown in 1979, when Michael Edwardes brought British Leyland Motor Corporation into a competitive state against the Far East by signing a deal with Honda. The outcome was the Triumph Acclaim – little more than a rebadged Honda Accord, assembled at Cowley. Badge engineering, but BL got a competitive product, and could learn a great deal from Honda’s reputation for quality engineering. Fast forward into the 1990s, and that partnership spawned the Rover 200, 400, 600 and 800 and many lessons in lean manufacturing.

Whilst this was all playing out on the other side of Birmingham, Solihull had been busily working away. Land Rover’s Project Jay was their hastily worked-up lancet into the rapidly-emerging lifestyle sector, where the Japanese 4x4 products were taking a foothold. As we now know, the stylish, desirable Discovery went on to pretty much define the market. Compared to the boxy, drab Japanese cars, Solihull’s really was the best 4x4 by far.

Jump forward to 1993. By now, Discovery was firmly established as a world-beater that all manufacturers eyed with envy.  As a car maker it was a market you needed to be in, which is precisely how Honda, in a complete reversal of their scenario with Rover, came to approach Land Rover. They needed a 4x4 quickly, so asked for help.

Land Rover’s John Towers later announced that Land Rover was to build the Discovery for Honda, and they were to call it Crossroad. An increase in production from 700 to 900 cars per week was implemented to cope with the extra demand from Japan and other territories. Until then, Land Rover sold cars into Japan through 35 Rover Japan dealers, notching up 1000 sales in two years. The Honda deal sold through the 400-dealer Verno group, to a market larger than all of Europe, estimating 1200 Crossroad sales per year.

To hedge their bets in the sector, Honda signed similar deals with Isuzu, selling the (Vauxhall) Frontera Sport as the Honda Jazz, and the Trooper as the Honda Horizon. In the US, their Acura arm sold the Frontera Estate as the Acura Passport. They also signed with Jeep to sell Cherokees in Japan. What that meant was that if you wanted a 4x4, buyers fell into two camps; those wanting the Britishness of Land Rover, or the perceived reliability of Honda.

The reality played out a little differently. The 1200 annual target was never reached. 1994 was the climax, reaching 620 sales, and by the time the 300Tdi facelift hit them, 1995 sales totalled a paltry 137 cars. Why? Well, you need to drill down to specification and the product. All cars were equipped with 3.9 Efi V8s and ZF automatic gearboxes with aircon and electric windows. Simply, for a vehicle sold so much on image and projections of lifestyle, the mass appeal of Britishness held much greater court than simply the splattering of Honda badges. 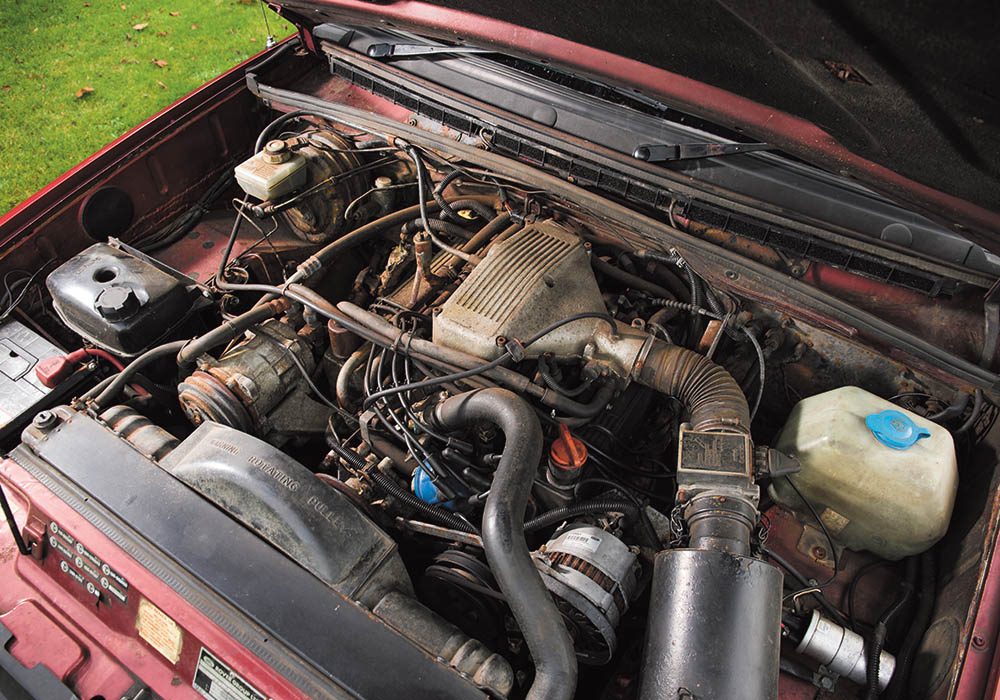 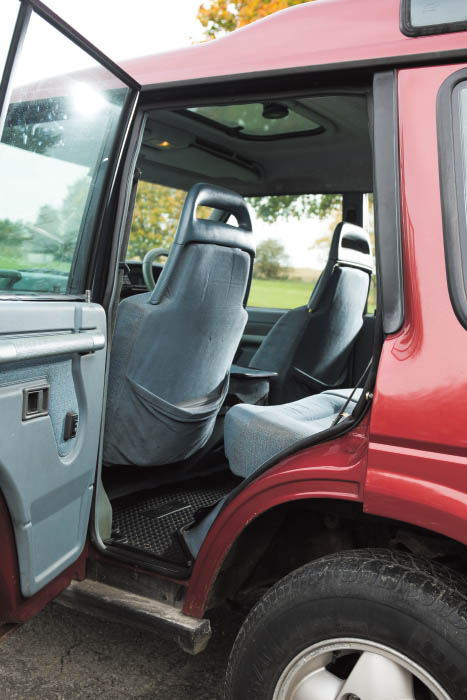 This is where the owner of these cars comes in. Roy Preston is a Discovery 1 superfan, owning no less than nine examples of the model. If anyone should have a Crossroad in the UK, is should be him. Aside from owning not one but two of these models, Roy has an example of every type of Discovery 1.

He’d been an ARC trialler in the 1970s, and in 2003 bought a 1991 Discovery to get back into it. That proved too nice to bend, but it got him hooked on the Disco. “On learning about the 1989 launch cars, I decided I wanted one,” Roy told me. In 2006 he did just that, buying G465 WAC, and later began collating the G-WAC Notes, an online newsletter for fans of early launch cars. “G465 was sold on as it needed work; when I spotted G526 WAC, a 200Tdi, for sale – my late wife needed side steps, and G526 had them, so I turned up one day with the new Disco, complete with steps for her!” Later Roy decided he really should have a G-WAC V8, so found another launch car, G478 WAC, in 2012, which is now undergoing a comprehensive restoration. In 2011 Roy and some other enthusiasts rescued a pre-production five door, with Efi V8, and got that back on the road. “That’s one of five pre-production models, though we know one was scrapped, and have another in the group, a left-hand drive V8.

“To preserve my G526, I bought a tidy 1993 three-door Tdi, which were my winter wheels. Realising then the 2.0-litre Mpi model was becoming rare, I bought one of those in 2014. Then I learnt about the Crossroad, so set to looking for one of those, too,” Roy recalls. He’d found one in August 2017 that had been stolen and recovered, with a broken steering lock. It needed welding, so he arranged that work to be done, hoping to make the 2018 show scene.

“Two weeks before the last show of 2018, I went to check progress, and it was obvious there was very little. I wouldn’t get to the show in it,” says Roy. “As luck would have it, a G-WAC friend spotted another Crossroad for sale, crucially with an MoT. The seller went to extremes to point out it wasn’t a Honda, it was actually a Land Rover, even questioning the DVLA to check. They’d stripped what Honda and crossroad badging they could, replacing the wheel centres with Land Rover ones. To me it meant I could at least show a Crossroad this year, so I bought it, and tried to reinstate what Honda bits I could. I managed to find some NOS Honda wheel centres, but am still looking for a radiator badge,” he says. 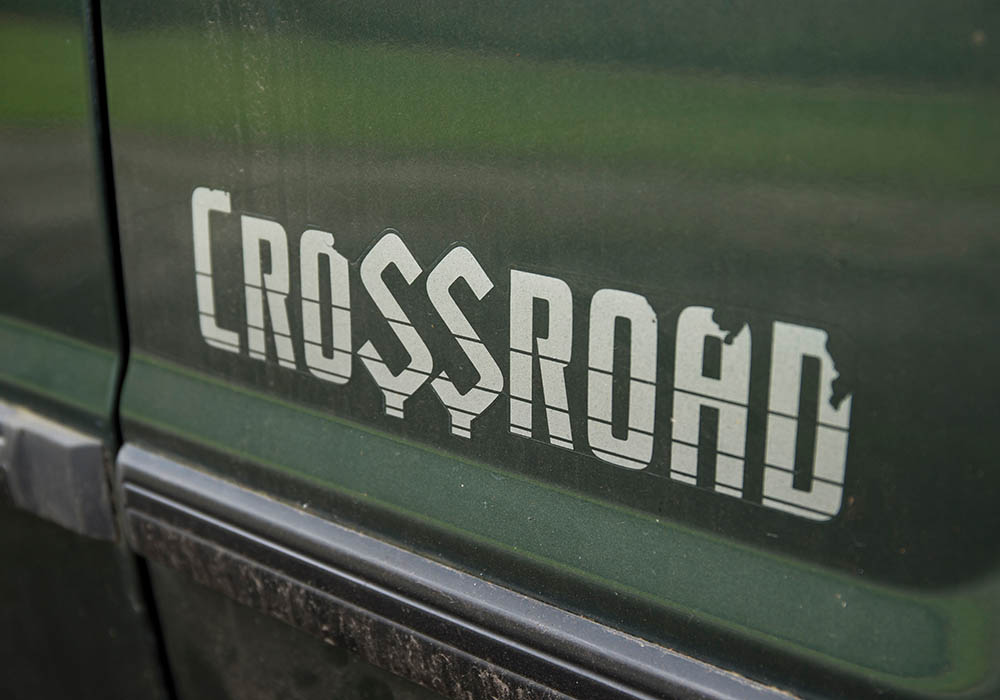 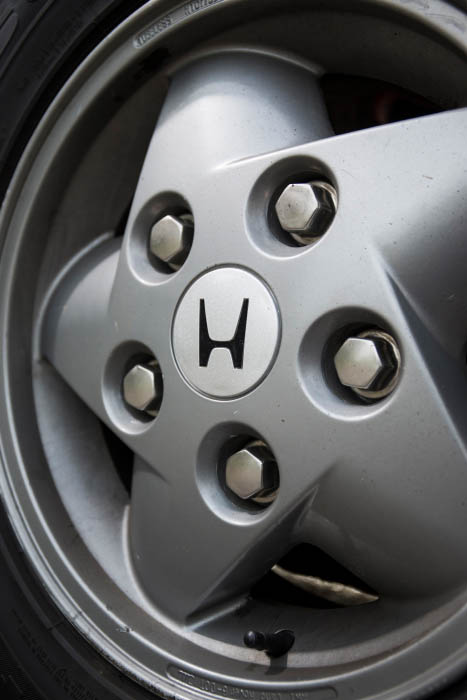 Roy insists I drive said Crossroad (L573 CTY) to the location of our shoot, and I’m glad he did. Admittedly it was a work in progress, riding on appalling lifted springs and rock-hard shocks, it is nonetheless a Crossroad.  What shines instantly is the Disco experience that captivated the market in the 1990s. The open, airy cabin, large steering wheel, smooth V8 and auto is a revelation after today’s complicated buttons and displays, never mind in the 1990s.

It is a great car today, albeit a classic and that is simply down to the bits from Birmingham, not Japan. Honda’s highlight on the car amounts to notably luxurious carpet mats and a nice steering wheel badge. 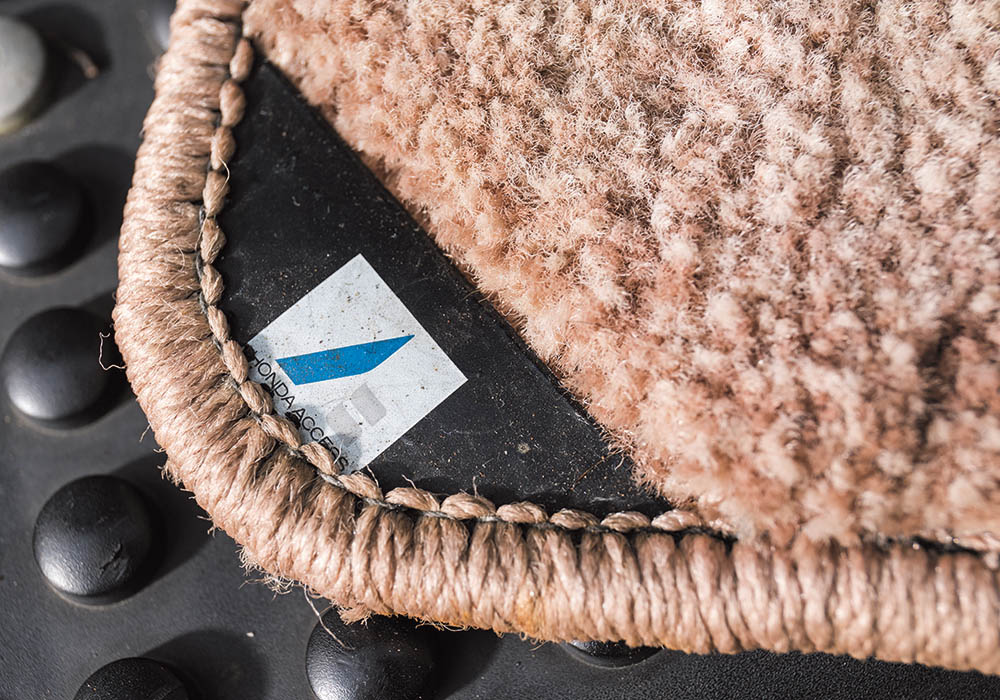 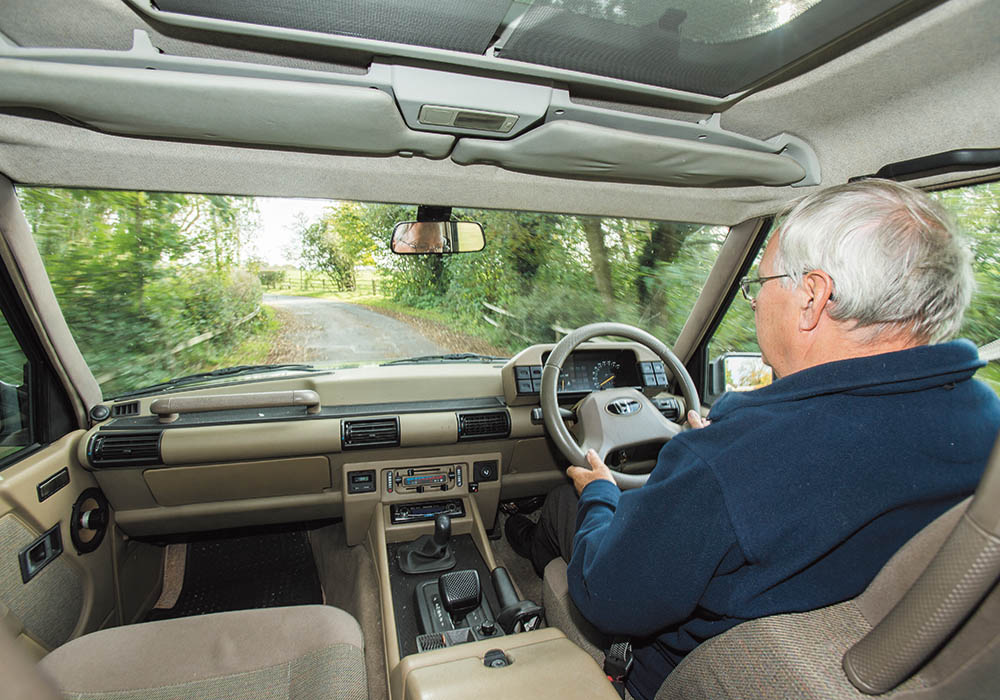 On the road, the only giveaway is the Honda steering wheel badge

At a time when Disco 1s are becoming hard to find, the Crossroad is a great, educated buy. Yes, it is badge engineering, but the best bits are pure Discovery. Many Crossroads went on to New Zealand, but if you can find one to import, it is a great car for the UK collector.

Less corrosion, a good spec, and with a superb engine and gearbox. Want to go super-rare? Look for one of those 137 late, facelift Discos. They’re one of the rarest in the world. Let me know if you find one!

Project Jay preservation Group
Started by Roy and a handful of early Discovery enthusiasts, the PJPG was set up for people interested in saving pre-production or early Discoverys. Of the 86 launch cars, 43 were sold on, the whereabouts of 20 are currently unknown, and the remaining 23 are accounted for.

Originally formed in 2007, when a number of launch car owners met up on the Heritage Run, it has since expanded to cover not just launch cars, but any early Discoverys. Roy collates a monthly email newsletter with early Discovery news, going to more than 200 subscribers, and the group attends as many shows as it can, from the NEC Classic and Restoration Show to all the major Land Rover events.

In January, the club is changing to a more formal affair and charging for membership. Purely to cover costs in running the club and funding the PLI and show materials – membership will be £25 a year. “There’s only 23 launch cars, so we’re not aiming to make a fortune, just cover costs, particularly the liability insurance for shows, but we hope to encourage owners of Jays to keep them on the road,” says Roy. They’re a great group, and deserve your support. If you’re interested in the model, they’re the place to go for information or vehicle leads. Check out southstaffs4x4.co.uk/. 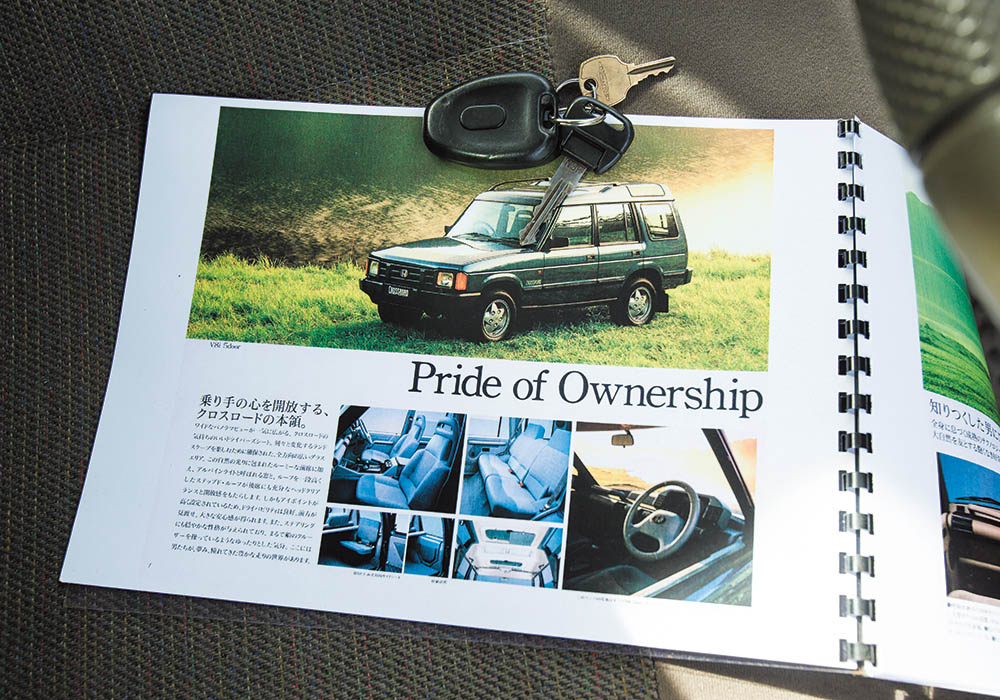 Is mine an early car? 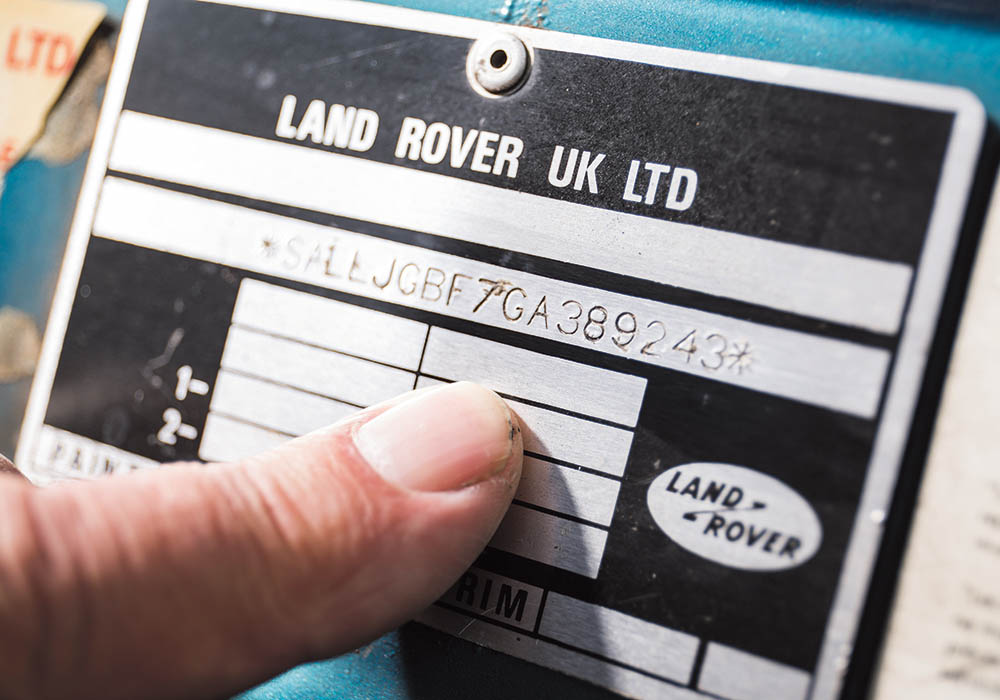 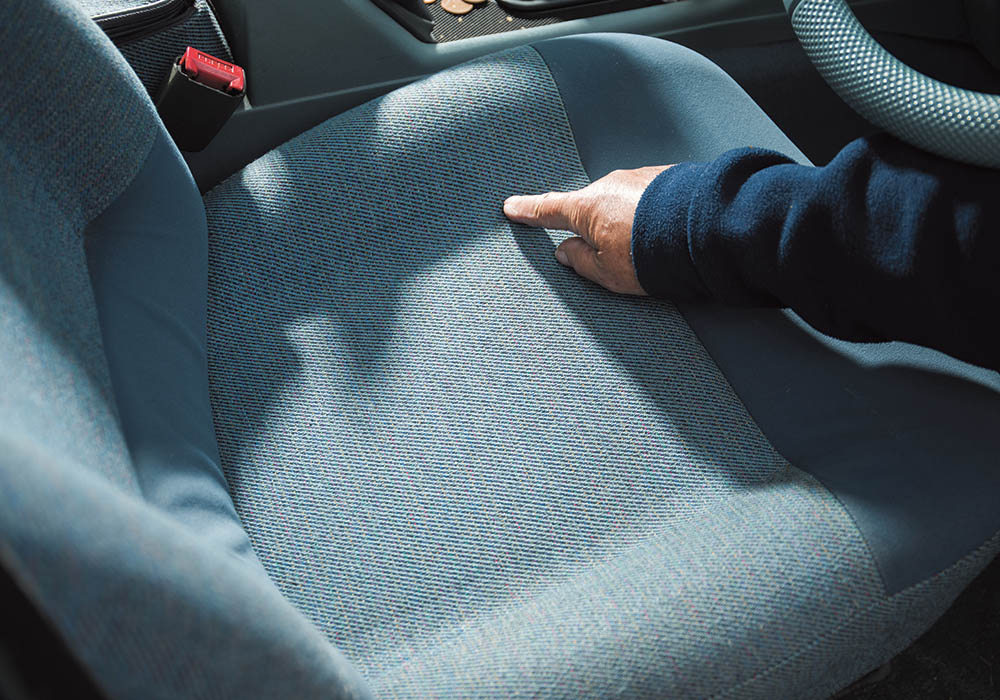 No stitching on the sides of the seat base panel 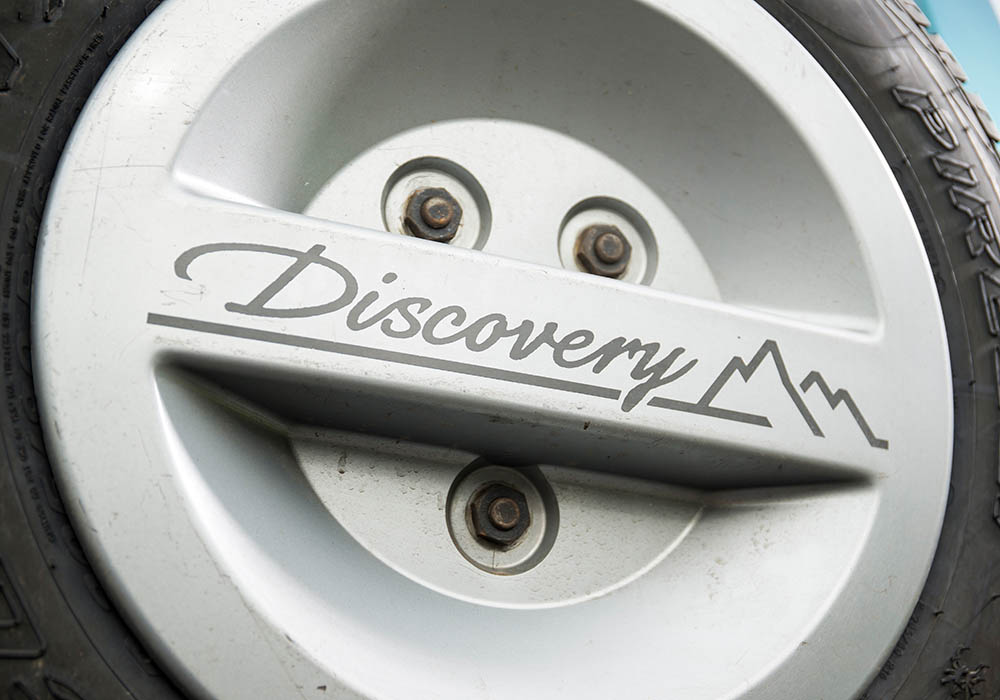 Sticker on spare wheel moulding. Later ones were moulded into plastic 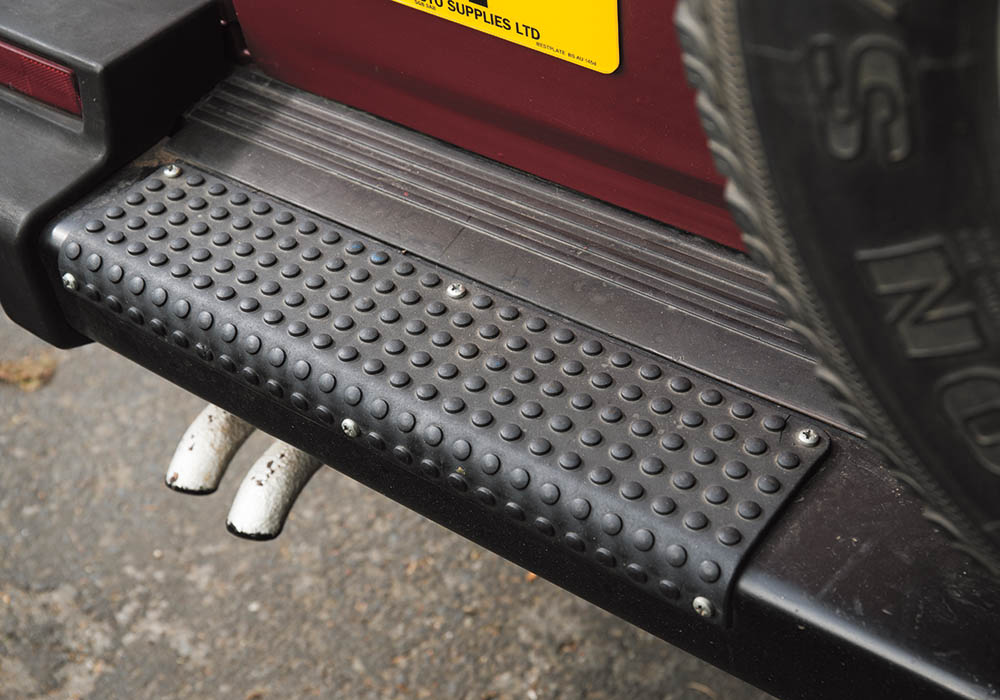 Narrower step plate on rear bumper – later ones were wider 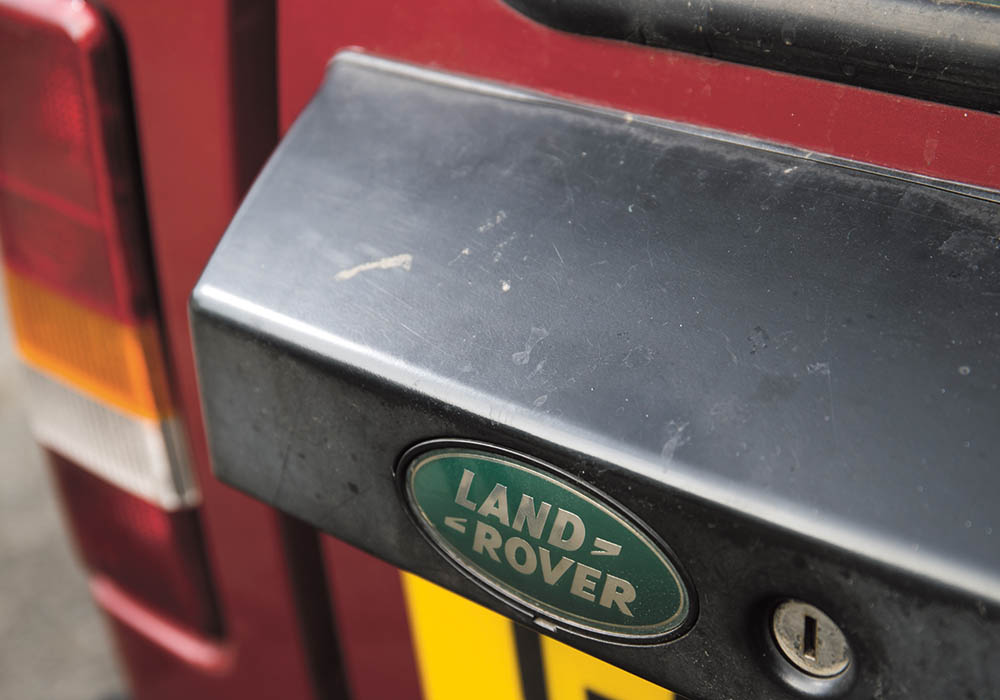 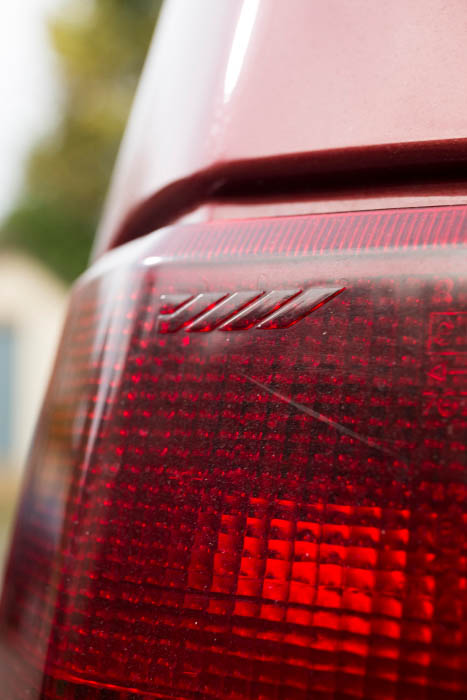