Short wheelbase soft top. Four words that describe Land Rovers in their purist and most fun form. Ever since HUE 166 left the Solihull production line in 1948 (note that the canvas roof was an optional extra back then), the SWB soft top is the classic original Land Rover, and it’s a combination that has stood the test of time. If you want a Land Rover that is good looking, reasonably practical and fun, then short and topless is the way to go.

Of course, the first few decades of Land Rover sales were all about work; until the late 1970s, when the idea of 4x4s being used for fun rather than farming hit the mainstream. Land Rover didn’t wholly know what they were on to when they dipped their toes into the water with the short-lived Cariba concept from the mid-1980s, but they were quick to learn. Although the Cariba remained a one-off, its promise of fun paved the way for the legendary soft-top NAS 90s and the less macho 90SV that was available in the UK only.

David Atkinson from Silverstone-based Land Rover specialists ACHSV agrees. “The vehicle you see in front of you is our interpretation of a Defender designed for fun, but with a touch of luxury. It’s not designed to be practical in the working sense – instead, it’s a vehicle that we built to showcase how we see Defender. It’s something that puts a smile on your face, with a firm nod to Defender’s heritage with some classic British luxury thrown in. We love it!” 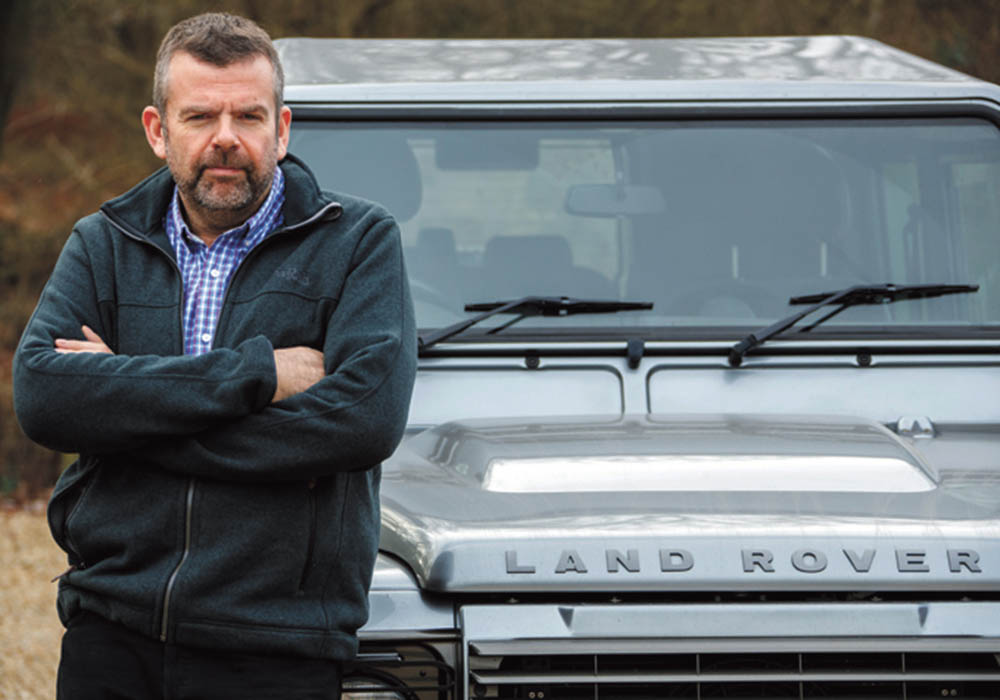 The vehicle started life as an eight-year-old Defender 90 pick-up, which had a relatively easy working life, but nonetheless suffered from some dings and scratches. With its work days behind it, it was time for a little glamour in retirement: the specification was drawn up for it to be a showcase for ACHSV’s Classic programme.

Although the vehicle was generally in good shape underneath, David and his team stripped it back to the bare bones to check that everything was as it should be, before painting and rebuilding it back to factory specification. Inevitably there was the odd patch of rust on the bulkhead, chassis and the usual places, and these were repaired, treated and put back to new.

At this point in the project, David and his wife Kathryn had to decide the final colour and trim of the vehicle.  Designed as a tribute to the original Defender, David wanted to incorporate several iconic elements as respectful nods to the original model, but with a modern colour scheme and luxurious interior.

“The need to produce a soft top version was obvious at this point,” states David. “And we thought we’d have a bit of fun with a bright red roof to contrast with the sober grey of the bodywork.” That grey is Porsche’s Black Grey from the GT3 RS, which David had admired on a few of Stuttgart’s hottest 911s whilst working in his previous business, a high-end vehicle delivery service. It has been lovingly applied by ACHSV’s own paint shop, and the multi-coat finish is nothing short of stunning.

Other nods to the Defender’s past are the two-piece military/NAS-spec doors with recessed pull-up handles, complete with galvanised trim, that continues along the top of the rear tub and down around the back. Although the first coil-sprung Land Rovers left the factory like this, this unpainted metal look wasn’t available after the mid 1980s, and it proved difficult to achieve the finish that David wanted. “When it first came back from the galvanisers, it looked far too fresh for my liking – it just didn’t look right. To make it better we developed a special technique to age it a little, and I’m happy with the result now.”

David and his team also spent countless hours making sure that the front doors shut with the right type of click. You might not think such things matter that much with a Defender, but it must be said there is a certain type of pleasure to be had from shutting a door on a soft top Land Rover that doesn’t so much clang as click shut with a satisfying clunk.

A nice feature that also references the Defender’s past is a neatly-modified front end, which incorporates Series III light surrounds, Defender wings, an exact replica of the Stage One V8 grille and Land Rover badging. I’ve always thought that this was a neat arrangement and arguably one that’s more elegant than the busy Heritage grilles that Land Rover fitted as standard for their end-of-line and 50th Anniversary editions.

Another element that might divide opinion is that bright red tilt. Put together by an ex-Aston Martin Works trimmer, that colour draws on the Porsche colour and trim chart once again, this time using a bespoke red mohair inspired by the 918 Boxster launch car. On the sunny December day of our photoshoot it certainly proved eye-catching, and let’s face it, that’s what this show car is designed to be.

In keeping with this colourful contrast, the sumptuous tan interior also stands out from the grey exterior. Once again, David drew upon his past for inspiration, this time recalling fond memories of childhood journeys in his uncle’s company Daimler, not to mention 20 years working with Jaguar Heritage. There’s no doubt that being surrounded by the smell, look and feel of rich tan leather is something very special indeed, and ACH Classic’s trimmer spent numerous hours recapturing those sensations for this Defender and he got it just right. 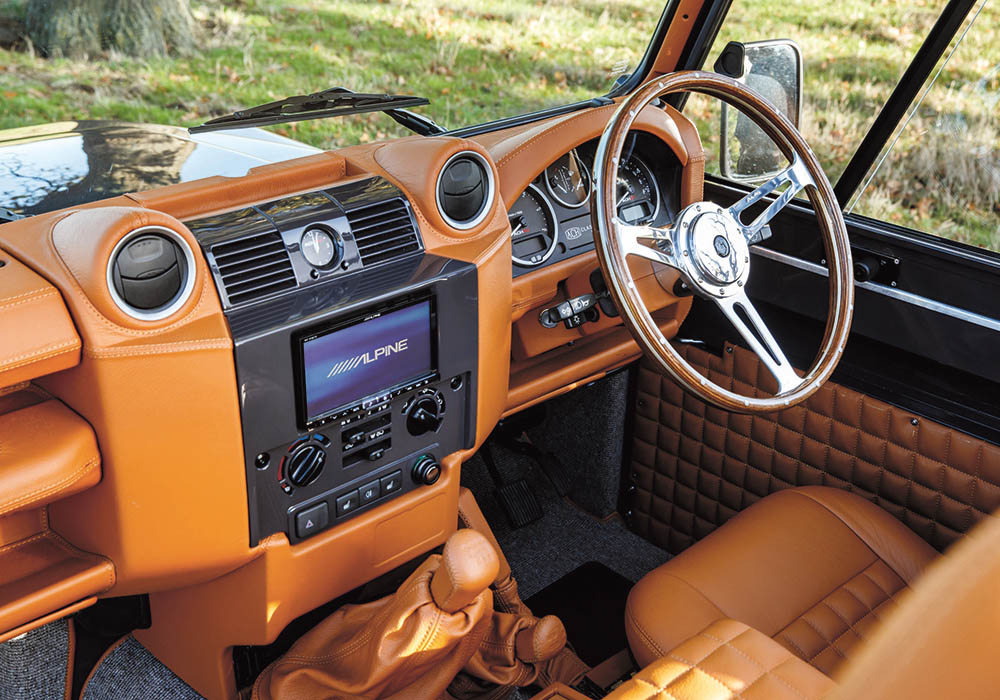 Without doubt this is one of the most luxurious Defenders that I’ve ever stepped into, and it’s a very special place indeed. Virtually every surface that can be covered in leather is covered in leather, from the seats, fascia, gear levers, handbrake and centre cubby box.

Carrying on with the classic British car theme, David had a bespoke chrome and wood-rimmed Moto-Lita steering wheel made, complete with the ACH logo in the middle. Further attention to detail includes ACH Classic and ACHSV logos embossed onto the otherwise standard Defender instrument pack. A nice touch that really finishes off the interior well.

Of course, in this day and age, the typical early ’80s Land Rover stereo system of AM/FM radio, two tin can speakers and – if you were lucky – a cassette player, is just not good enough. In the ACH Defender, there’s a double DIN Alpine head unit that serves as a multimedia player, satnav and digital radio. It’s been totally integrated into the dash by moving some of the switches around, and you’ll note that the missing ones (such as those that operate the electric window and rear demist) haven’t just been replaced with blanks. Instead the whole thing has been flattened off and finished to factory standard, painted once again in Porsche Black Grey. Furthermore, the plastic cup holder has been repainted in exactly the same shade as the leather, and even the clock has the ACH SV logo embossed on its face. 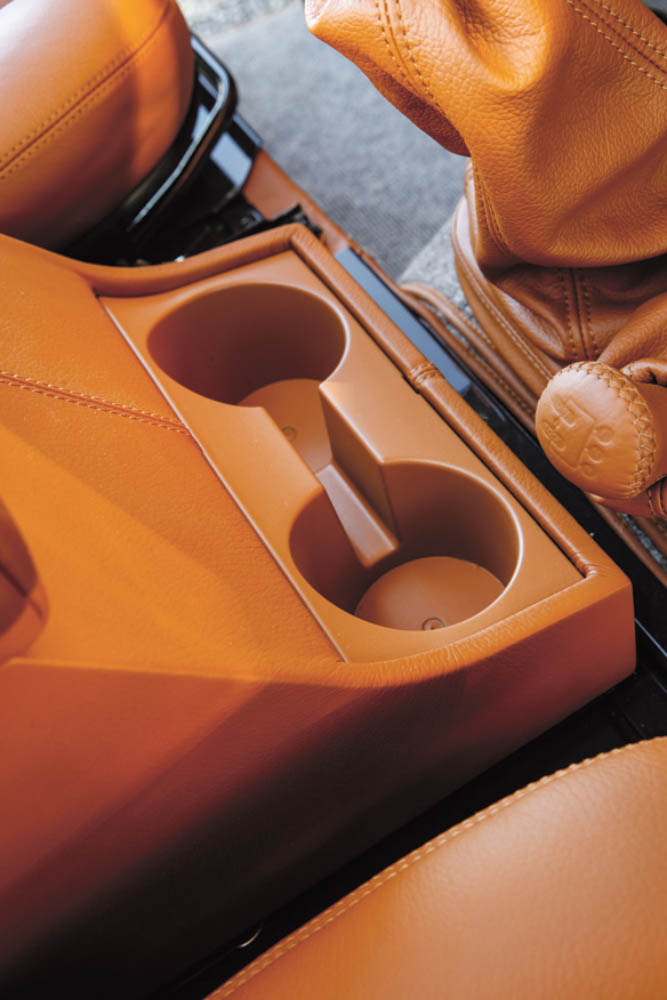 One area that hasn’t had any modification is the powertrain and mechanicals: the vehicle features the standard Ford 2.4 litre Puma engine and six-speed MT82 gearbox as fitted when it was first built. Nevertheless, to keep the overall appearance of the vehicle up, all serviceable components were replaced and the axles refurbished; while the suspension was refreshed with new springs, dampers and anti-roll bars front and rear. Under the bonnet, the rocker cover has been painted Candy Apple Red to brighten up the engine compartment. 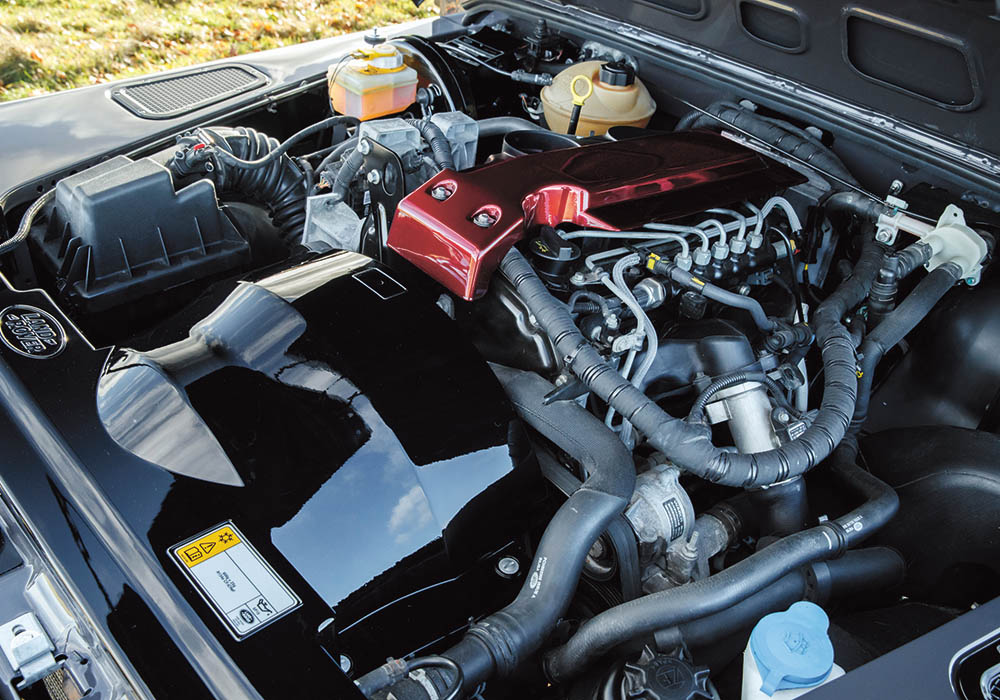 For now, things are standard under the bonnet

“As this was more a project about what can be done with the aesthetics of the Defender, we decided not to get involved with increasing power or doing any other kind of engine or gearbox upgrade,” said David. “Having said that, I can’t help thinking that it would sound very nice sat here ticking over with a V8 burble. Maybe if we have a few days free sometime soon, we’ll stick one in,” he said, a twinkle in the eye!

Wheels and tyres are also OEM. 16 inch Wolf steels shod with the classic Defender tyre: Goodyear Wrangler 205/85R16 MTRs. Like the front bumper, the wheels have been colour coded to the body – a subtle touch but one that finishes off the vehicle very nicely indeed.

Overall, this very tidy Defender 90 is a fantastic showcase for ACH Classic and their exterior and interior modifications, but on further discussion I discover that it’s quite possible that this eye-catching Defender was built for another reason. “This 90 was the vehicle that carried my wife and I away from the church after our wedding last year,” smiles David. “As such, it’s a very special vehicle to us and isn’t really for sale. We’ve been very pleased to receive three orders for similar vehicles off the back of it, and if a customer came along and wanted us to build an exact sister vehicle, we’d be delighted to talk to them!” 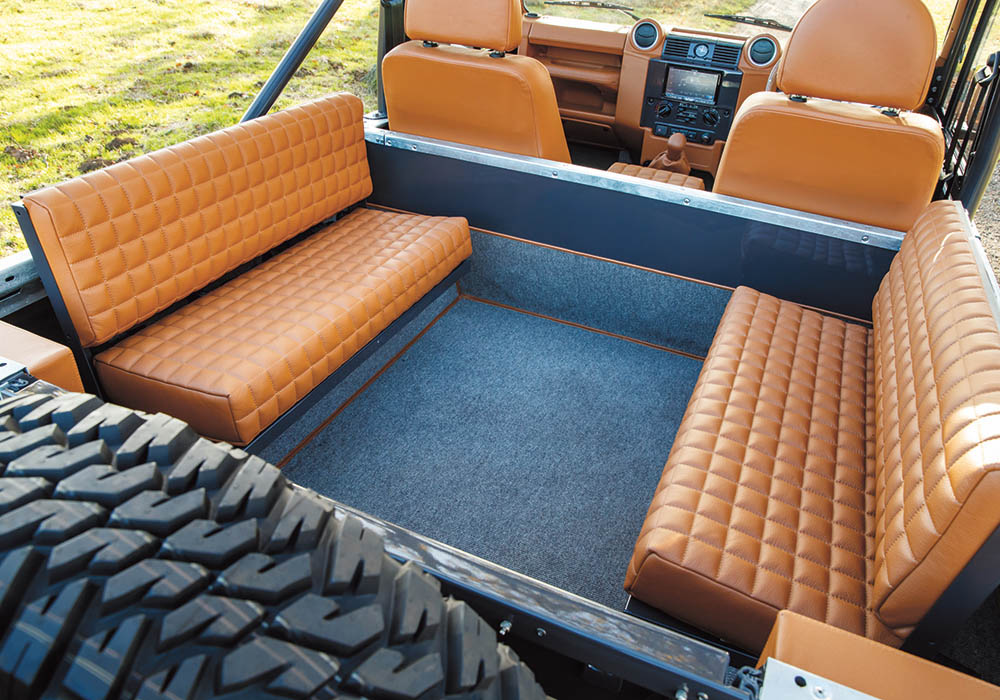 One thing’s for sure, the soft top 90 - be it factory standard or fully converted like the one you see here - makes a great choice for off-road fun days, drives in the country or even as wedding transport, fully topless of course!