No oil slick in the rearview mirror is a good thing : credit: © Michael Porter

Mario Gauci is a furniture importer, based on the island of Malta. Every spare minute this dedicated family man has, is devoted to the other big love of his life, Land Rovers. Mario has owned Land Rovers since he was 16 years old. His first was a Series IIA and this is when he got bitten by the Land Rover bug. This was followed by a Discovery 1 but then the Maltese authorities decided that youngsters driving turbo'd vehicles should pay in excess of Euros 2500 for insurance! This forced Mario to go over to the dark side. He purchased a Toyota.

In 2006, once older and wiser and with a few more pennies in his pocket, Mario returned to the Land Rover fold with the purchase of a Defender 90, which he then spent years turning into his dream off-roader. It was around then that he also joined the Malta Land Rover Owners' Club. Due to its historical relationship with the United Kingdom, you will find more Land Rover per capita in Malta, than in say Italy or Spain. Land Rovers became the island's recreational vehicle of choice as they can go over rocks and drive on the beaches. In the late 1990s this changed and the islanders had to stick to a few greenlanes and annual Land Rover Fest.

At the 2017 Malta Land Rover Owners' Club show Mario stood in front of a 101 Forward Control for the first time. At the time he owned two other Land Rovers: a Defender 90 for off-roading and Lightweight Series III that needs restoring. Up until then the only other place he had seen a 101 Forward Control one was in Land Rover books or in a copy of LRM. ‘‘I was in awe of what I saw, I loved the lines and the crudeness of the vehicle. I immediately fell in love with it.’’ 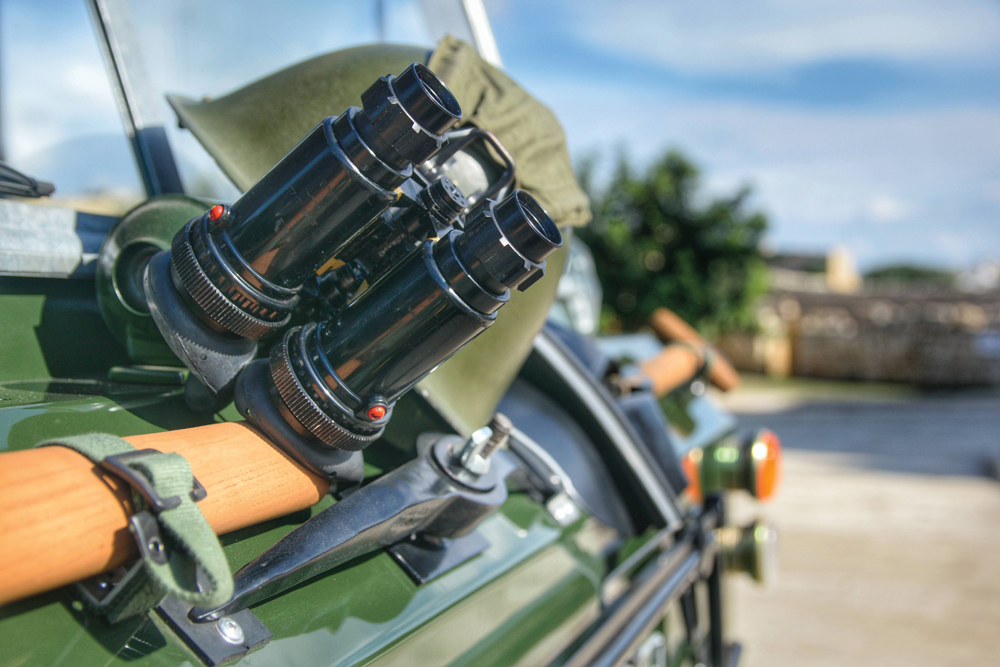 Mario just had to own one and two months later he did. This was precluded by some research on 101s and internet searches to see what was out there before he then made his move. In December 2017 he saw a 101 Forward Control GS 12V on eBay that he liked, but it was in Britain. ‘‘The main challenge with buying abroad is that you can’t physically see it before you buy it, other than that, the shipping bit is pretty easy. We are on an island and everything gets shipped to us anyway. I was lucky in that I bought it from a really decent chap, and when I requested detailed pictures of the engine and chassis he obliged. I totally trusted him as he is a respected member of the Land Rover community.’’

Mario had very clear intentions when he purchased his beloved 101 Forward Control. ‘‘I did not buy this as a fun thing to go off-roading in, it was always going to be a full nut and bolt restoration.

"I wanted to completely dismantle it and start from scratch, but also to learn as much as I could about it.’’ 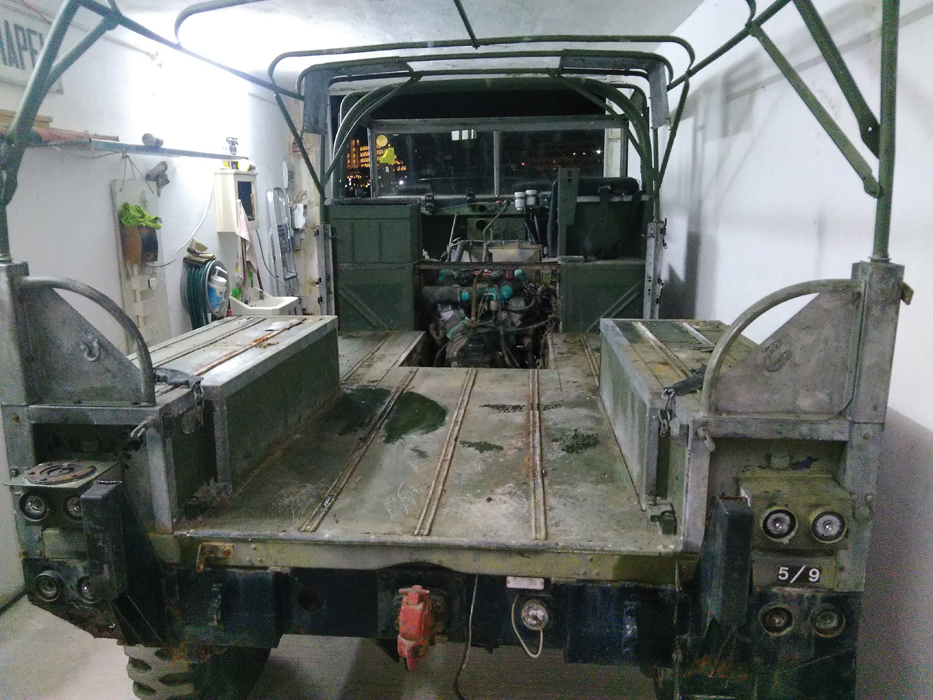 In January 2018 the 101 arrived in a shipping container. Once removed, Mario contacted the local authorities to get it registered as a vintage vehicle. As with most dealings with authorities, this took a bit of time, two months in fact, as they first had to come and have a physical look at it. Then only after it had passed a local VRT (same as our MoT) was it given a black vintage vehicle number plate.

During the last few months of its life in the UK the clutch had seized, then it was left standing, but Mario had seen a video of the engine running prior to the purchase so he knew what he was getting into. He started by dismantling the body, doors and the cab. As he had no local reference vehicle to assist him, Mario took loads of photos (which he gladly showed me) to assist him when it all had to go back together again. 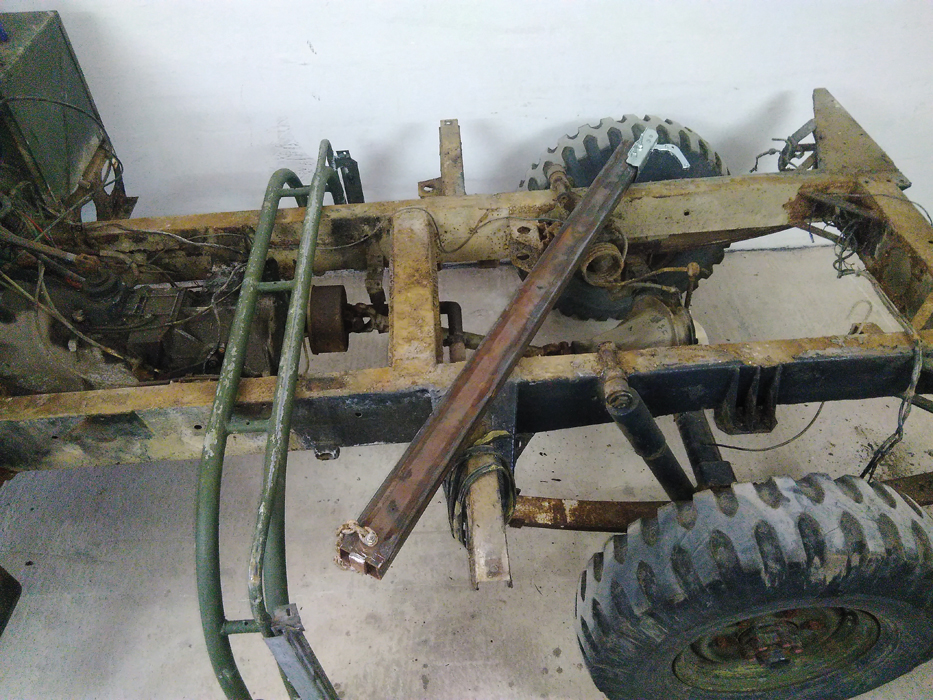 Total strip down in progress

The 3.5-litre V8 engine and gearbox were then removed and taken to a friend who mainly works on ships. 101s tend to handle like ships, so maybe this was not a bad call? ‘‘We did a total overhaul of the engine; I was leaving nothing to chance. One of the rods was bent, but it had not damaged or touched anything else. We were lucky and that it only cost a few quid to replace. So now it is basically a new engine,’’ stated Mario proudly.

Fortunately for this Landy fan, it has much in common with the Series III and lots of the parts match. Whenever Mario got stuck he could call Martin Howdle of Able Engineering (101parts.co.uk). ‘‘He knows 101s better than most so whenever I needed some help I called him. When it came to technical details he was second to none.’’ Mario’s aim was to get it looking like it did when it left Land Rover. He contacted the 101 Forward Control Club and they kindly provided him with all the details of its military service history (see panel below). 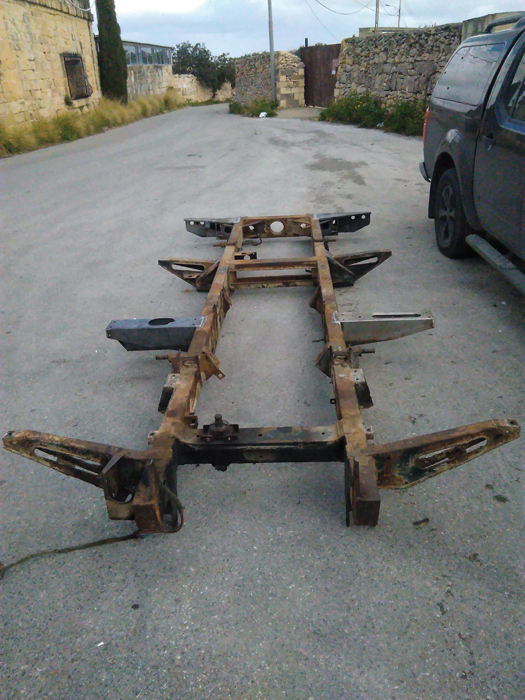 The rest of the Forward Control rebuild was not as straightforward as the engine sadly. While the chassis was fairly solid it would need a new rear crossmember and an outrigger. Fortunately Mario’s friends at Able Engineering had the jig to make new ones for him. Once they were welded in place Mario sent the chassis for blasting and painting.

He then moved on to the axles. Living on a Land Rover-mad small island has its perks; a friend who normally works on trucks, opened up the axles for Mario, he then changed some bits and the bearings. He also worked on the brakes, overhauling the cylinders and putting in new brake lines. The axles were then sent away for blasting and painting. Mario could finally start assembling it all again.

The first big task was to get it to the rolling chassis stage. With the axles in place along with the freshly painted and refurbed leaf springs, Mario replaced all the bushes with Polybush ones. He also fitted new shock absorbers. Brake, fuel and clutch lines were next, followed by a new Autosparks wiring loom. 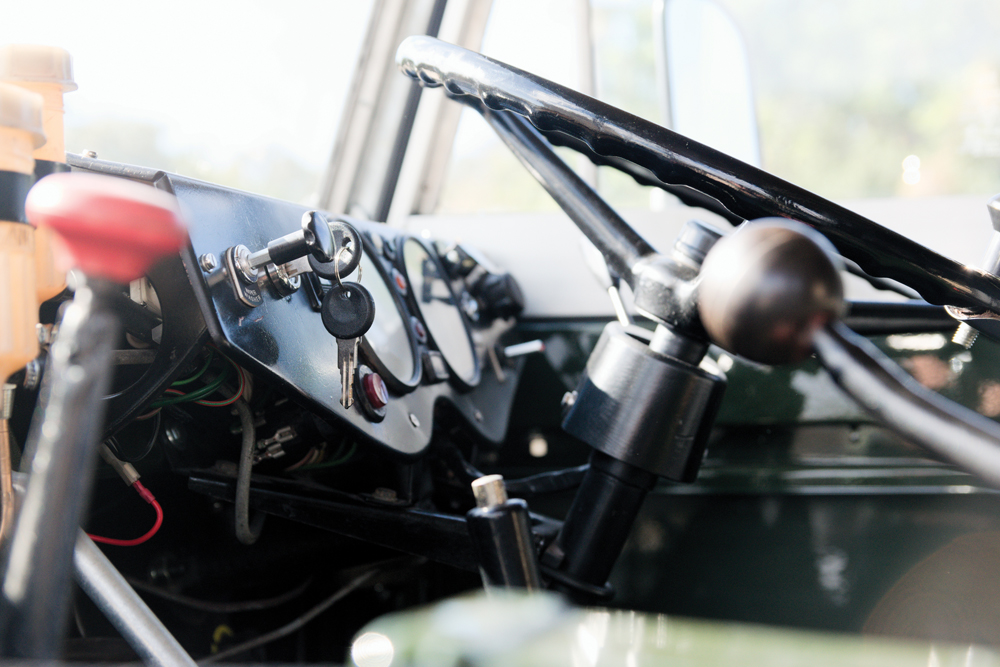 Obviously it had its challenges as Mario explains: ‘‘Once the loom was installed and I indicated right, left or put the hazards on, all four sets of lights came on at once. This caused me several weeks of worry. After a lots of digging I found two wires which had been joined together, should have been separate. I had solved the problem.’’

He also described the dismantling and rebuild of the steering box as ‘fidgety’ because the small ball bearings had to be re-inserted, one by one. Incredibly though, the biggest problem he had was finding a windscreen wiper nut due to its thread and size. He visited every auto and nut and bolt shop on the island without any luck. Eventually he discovered it matched the Morris Mini Minor wiper nut. Someone told him to call Rimmer Bros (who had them in stock) and the problem was solved.

He literally replaced just about everything that he needed to, from the exhausts to the mudflaps. If he could not find a new part, the old one was refurbed, like the old oil cooler. He doesn't recall exactly how many pop rivets he removed but he took off all the cappings and got them shotblasted and regalvanised, too and when a panel needed replacing, he got a sheet of aluminium and used a friend’s cutter together to make them himself. 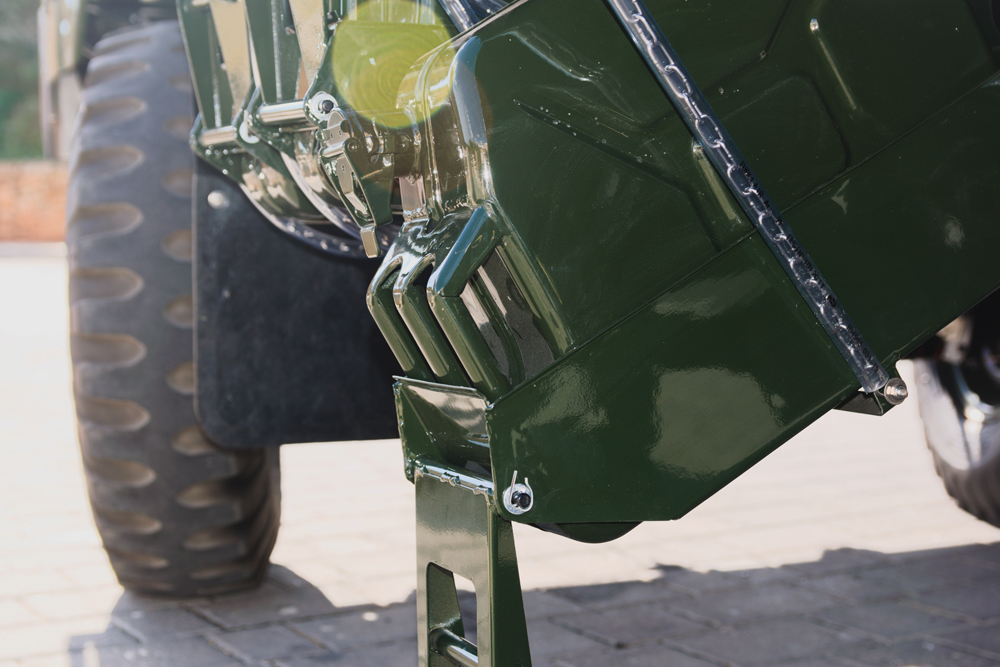 The thirsty V8 has a fuel back-up plan

And talking of the exterior, while lots of people will tell you it should be matt green when Mario peeled back the layers of paint it was gloss green. His research indicates that the military had ordered them in gloss deep bronze green, which they brush painted in matt green once they had taken delivery of them. A 101 FC expert then told him that the heater box should be black and not green, so it's now period-correct.

Mario has also held on to all of the military bits that he removed, most from the load area. These include comms equipment, boxes, cages and a cylindrical storage case. Once he finds more information about them, they too will be correctly reinstalled, but for now – as from March, 2020, Mario had eventually finished the full rebuild of his beloved 101. 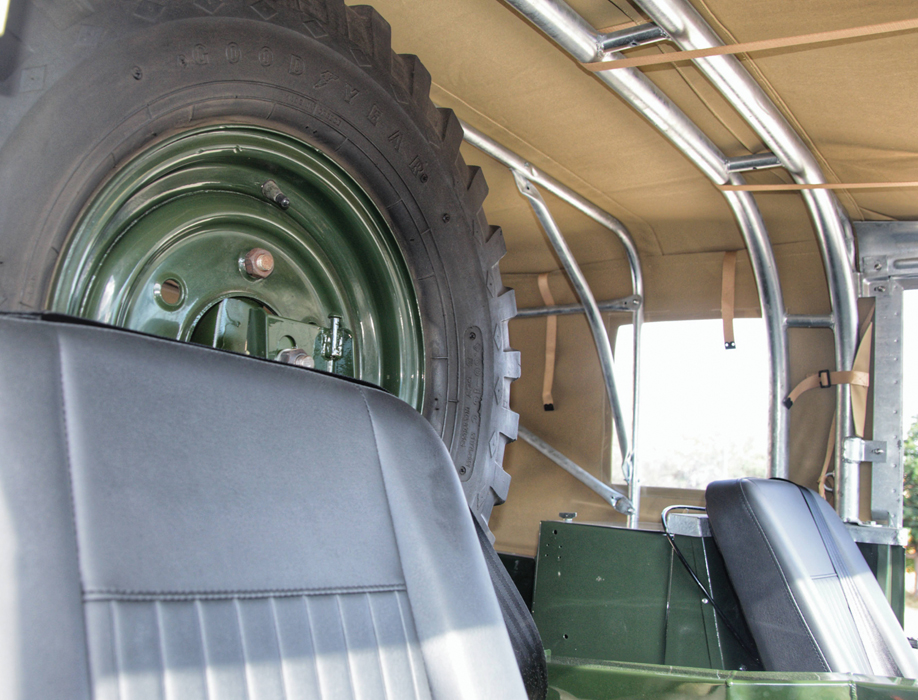 His passion and dedication come across strongly during our hour long interview and I have to conclude that due to his experience, knowledge and contacts, this was not too difficult for him. Every Saturday over those three years he would head to his workshop and spend a full day working on the Forward Control, but it was never a chore. It was his time away from work and other worldly concerns.

Given the pandemic struck just as he finished it, I ask Mario if it has been used much in the last ten months or so? ‘‘For a start the Forward Control does not come out when it is raining. I’ve managed to get it to a few shows, charity drives and Sunday outings. It is a real crowd puller, especially here in Malta, as it is such a rare, yet beautiful thing. 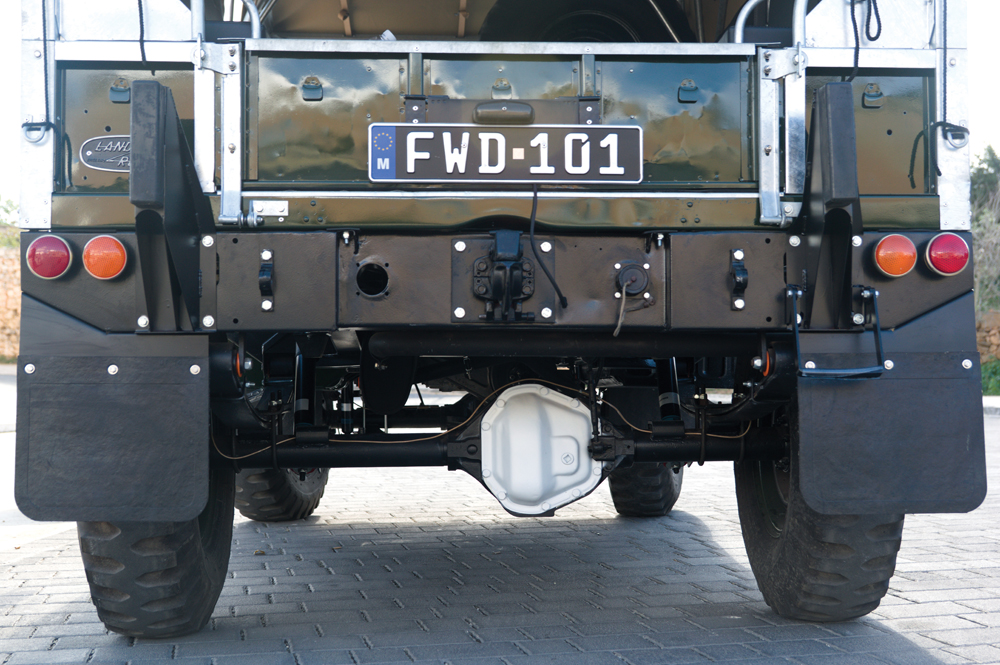 Vintage vehicles on the island have a black number plate

‘‘I know it is not the most practical, it guzzles fuel and it does not have power steering, but I can live with all of that. I have found it more comfortable to drive than my 90, but definitely not easier to park! When I drive it, it makes me happy and everyone else that sees it.’’

Mario has some great advice for anyone thinking of taking on something similar. ‘‘I am not a mechanic or panel beater, just a guy who loves Land Rovers. I like to take things slowly. Then when I can’t do something, I call on others who can.’’

It's a top tip, and if you've got his enthusiasm and dedication we reckon anything's possible. Top job, Mario. 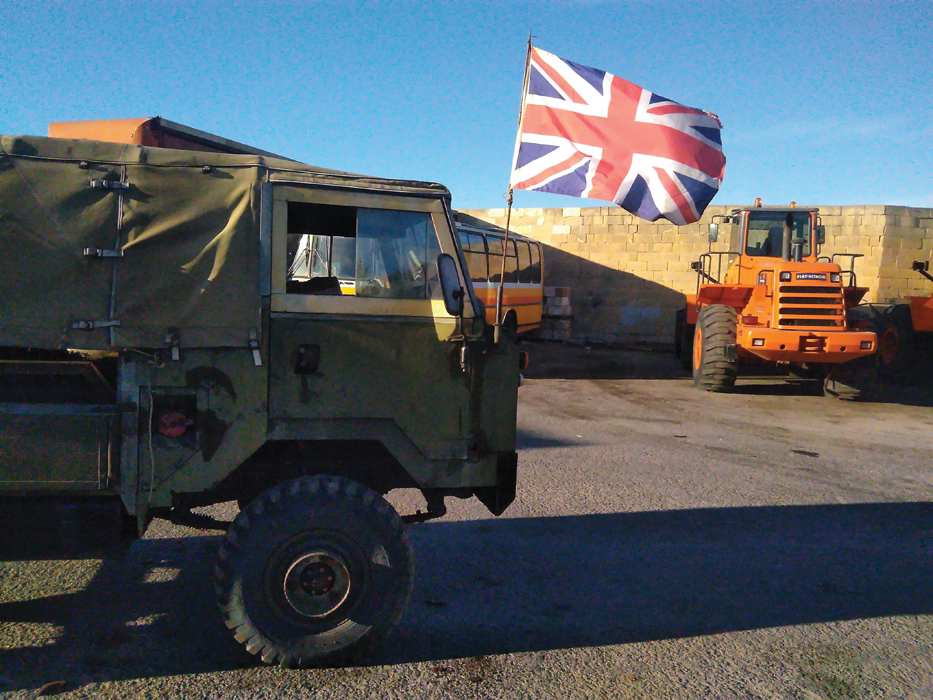 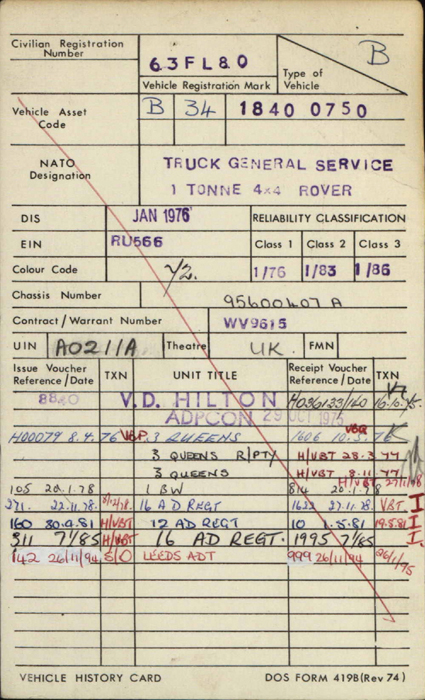 Les Adams, the 101 Forward Control Club historian and registrar kindly provided the following information on Mario’s 101’s days in the military. According to its history card it was built as a gloss bronze green (colour code 72) 12V RHD General Service 1 Tonne vehicle (Equipment Identity Number RU556) and was delivered to the Hilton Vehicle Depot on 16/10/1975. In January of the following year it was taken into service by the British army. After a period of storage it was issued to the 3rd Battalion Queens Regiment on 8/7/1976. It served with this infantry regiment until 20/1/1978. It then went to the 1st Battalion The Black Watch until 22/11/1978 before being issued to the 16th Air Defence Regiment. It stayed with this Royal Artillery Regiment until 30/4/1981, it was then issued to the 12th Air Defence Regiment RA before returning to the 16th Air Defence Regiment until it was struck off and auctioned on 26/11/1994. It’s reg number while in the military was 63FL80.