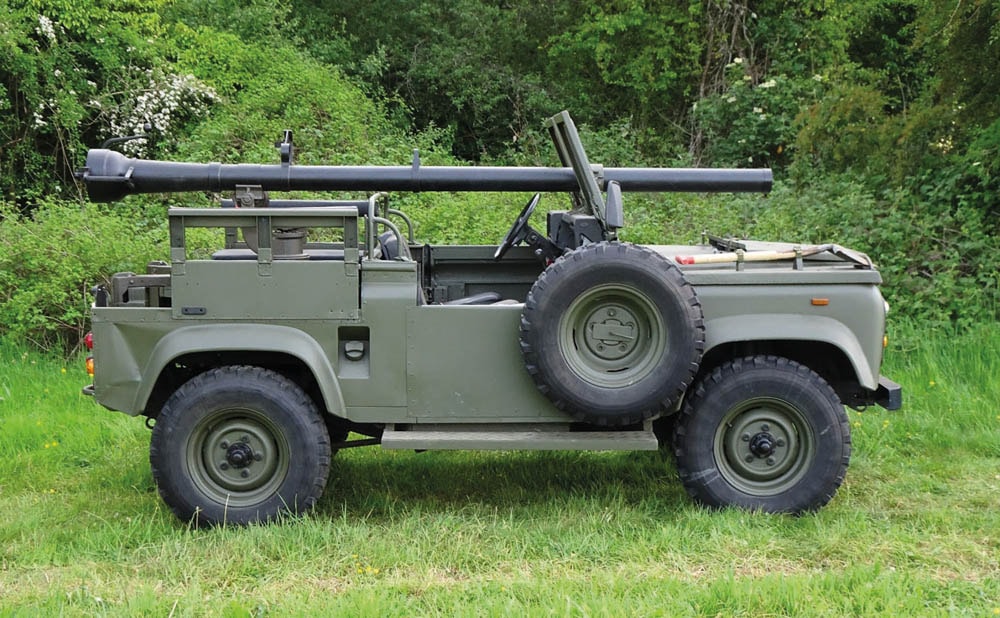 One of the most interesting of the many military incarnations of the Land Rover is the Ninety Gunship dating from the mid-1980s, one of which survives in the Dunsfold Collection. It has always looked rather forlorn and odd because it has been missing the one thing that it was created to carry – a Recoilless Rifle. After years of fruitless searching and a couple of near misses, Dunsfold’s Philip Bashall finally managed to find one. And lockdown provided him with the perfect opportunity to fit it. 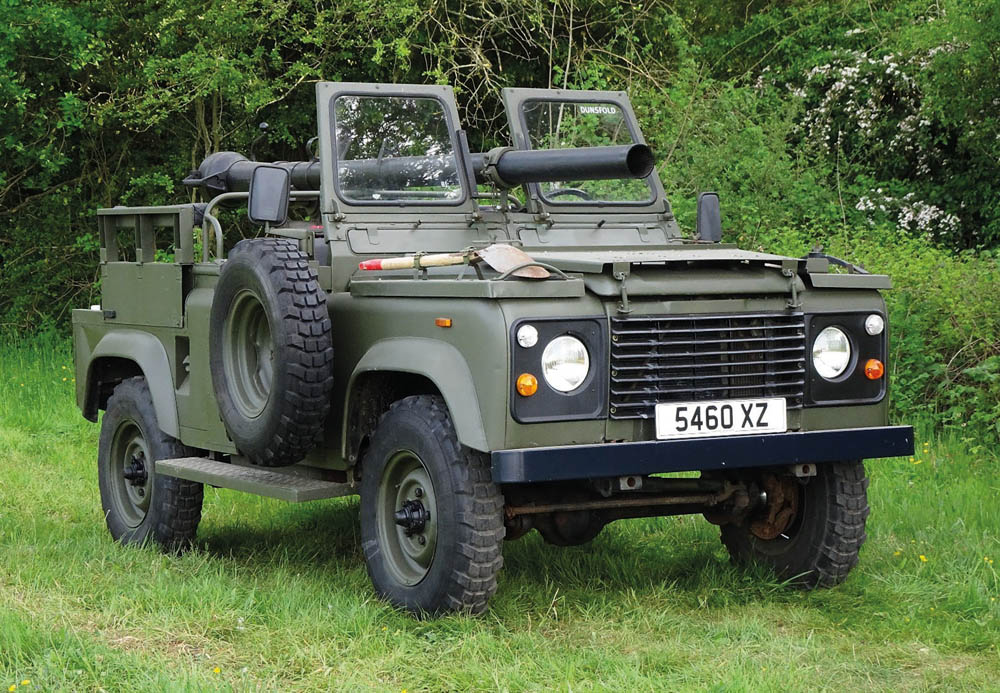 No door on driver's side 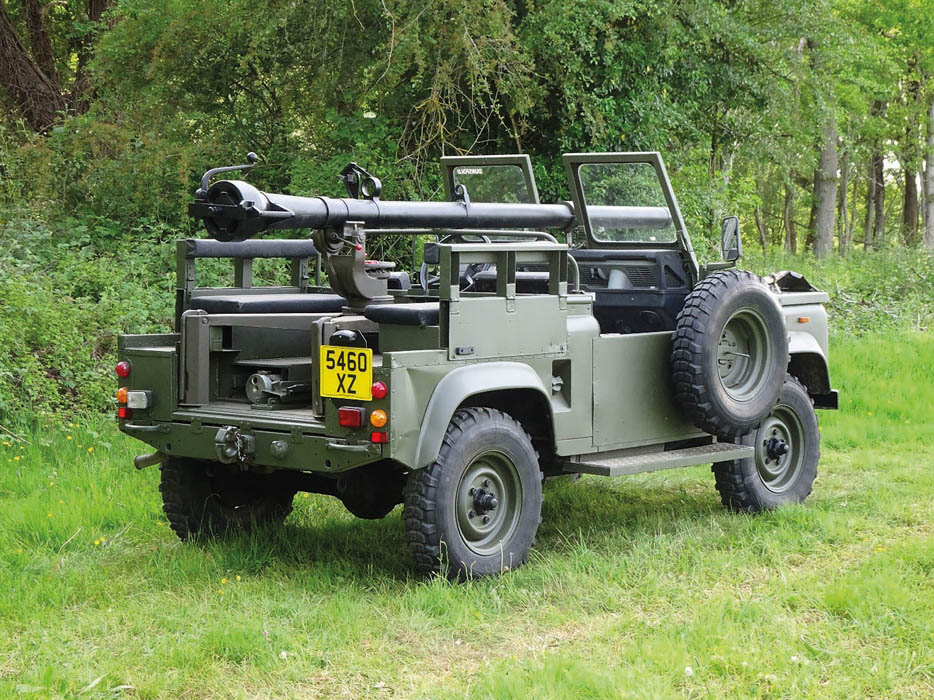 The US-made M40 106 mm Recoilless Rifle was a portable anti-tank weapon that could be fired on the ground from a wheeled tripod mount, but was also commonly mounted on vehicles and, in the case of the Greek navy, on boats. It was introduced into service by the US military in 1955 and saw extensive use in Vietnam and many other theatres after that conflict, eventually being used by the armed forces of almost 100 countries. The US military typically mounted it on a Jeep, the idea being that the weapon would be capable of rapid movement on the battlefield, although batteries of six M40s were mounted to great effect on the formidable M50 Ontos tank destroyer.

Interestingly, although designated 106 mm the bore of the M40 is actually 105 mm. The 106 mm name was adopted to avoid confusion with incompatible 105 mm ammunition that had been developed for the M40’s predecessor, the unsuccessful M27. The M40 was primarily intended as an anti-tank weapon, although it could also be used in the anti-personnel role firing cartridges packed with dart-like flechettes. 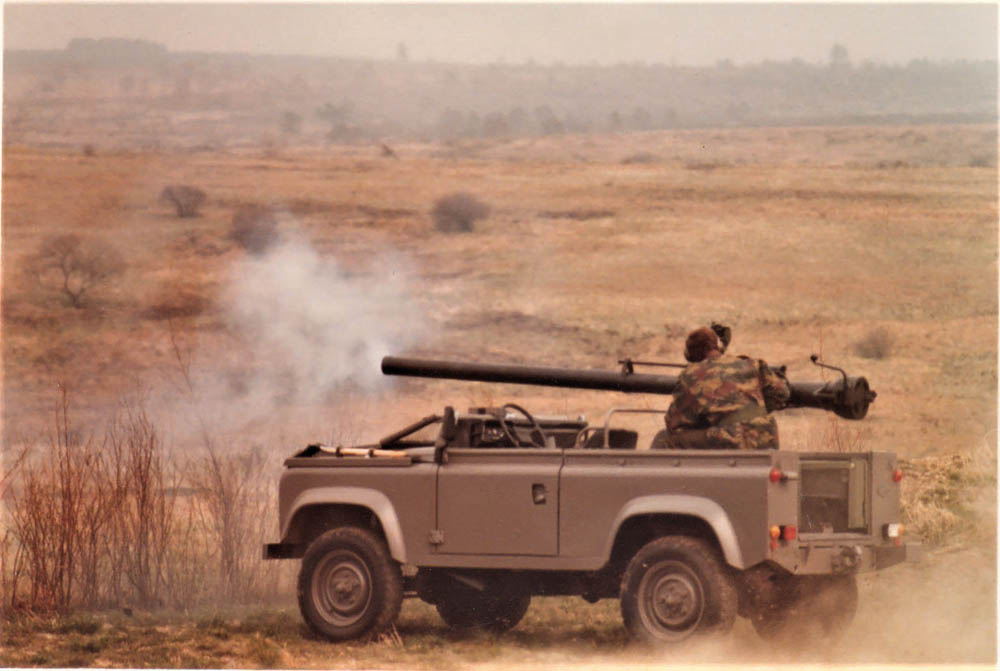 The rifle was air-cooled and fired a single shot. It was designed for direct, line-of-sight firing, meaning that it had to be aimed at a visible target. Sighting was achieved by mounting a .50cal rifle above the barrel on the M40 and firing the rifle at the target using special ammunition that emitted a visible puff of smoke on impact. Once the sighting rifle had done its job, the M40 would be fired and the projectile would impact the target exactly where the sighting round had landed.

“Land Rover had first flirted with the M40 in the late 1970s,” says Philip Bashall. “This was when the ½ Ton 106 mm Gunship was offered for sale based on the contemporary Lightweight, but the first Ninety to be modified by Marshall of Cambridge Ltd was chassis number 10, A154 GVC, which was the penultimate of the 11 prototype Nineties.” 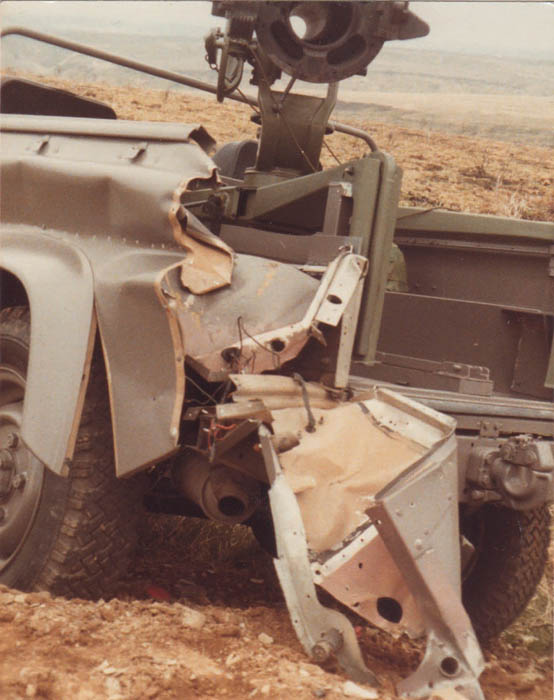 “It was taken to Belgium in around 1984 and fired its M40 Recoilless Rifle for the first time on the ranges there. Unfortunately, one of the shots was taken with the rifle at a high angle of elevation, and the resulting blast blew off the rear corner of the tub! It was rebuilt at Marshall with a modified rear body and according to the records it was delivered to them for scrapping in May 1985. Actually, I think it was still being used by Marshalls and Land Rover as a demonstrator until the early 1990s, and we have photos of it painted Sand at the Discovery family day in 1989 and at the 1990 CSK launch event I 1990. We assume it was finally disposed of by Marshalls in the mid-1990s, when it was replaced by our vehicle, which is a 200Tdi with VIN SALLDVAFF8 HA465579 and dates from 1990. 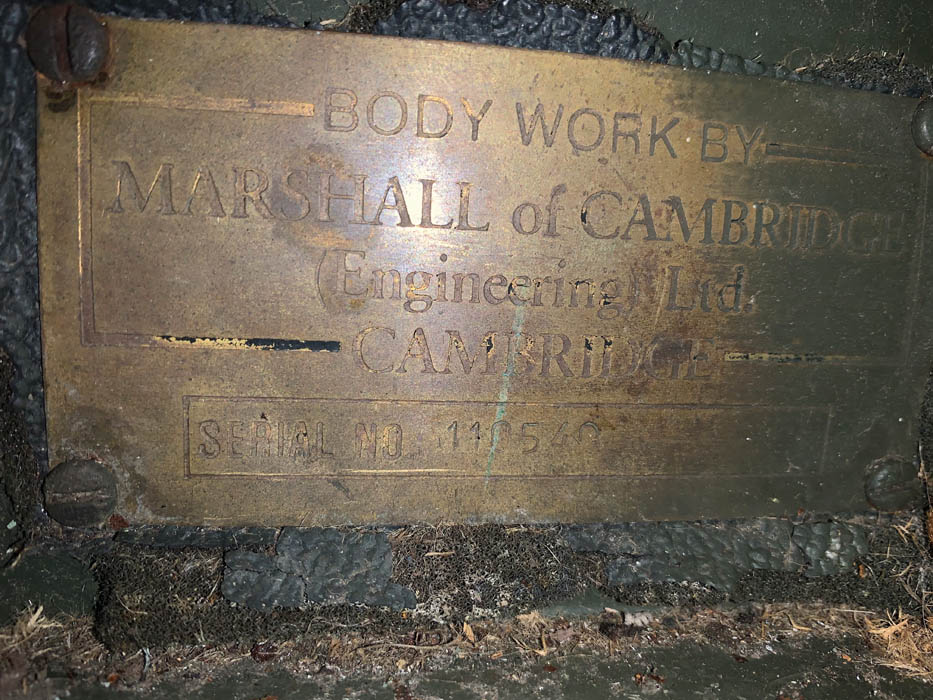 “The modifications to accommodate the rifle were again made by Marshalls and it is mounted on the same tripod used to operate it on the ground. The forward-facing leg of the tripod has a single wheel that fits into a slot in the rear bulkhead, while the two backward-facing legs are locked into position at the rear of the tub by pulling down two large levers. Demounting it is achieved by clipping on a single U-channel ramp at the rear of the vehicle, lifting the two locking handles on the rear legs, and pulling the rifle on the tripod backwards and down the ramp. We don’t know how many Ninety Gunships were built, but close examination of the available photographs suggests that it was no more than two or possibly three, making Dunsfold’s example a very rare Land Rover indeed.

“The M40 on the Ninety weighs 220kg and has a forward-facing arc of fire of 180 degrees with the windscreens folded flat. Each round weighs 27 kg and six can be carried on the vehicle, two in lockers either side of the tub and two under the left-hand rear seat.

“The British Army never ordered the Gunship although they are known to have been used by Singapore and Holland, while Otokar in Turkey offered their own version based on a 300Tdi, identifiable by the fitting of a jerry can on the side and a brush bar on the front. Land Rover produced some fascinating and now quite rare sales brochures, and we have a number of these in the Collection archive. 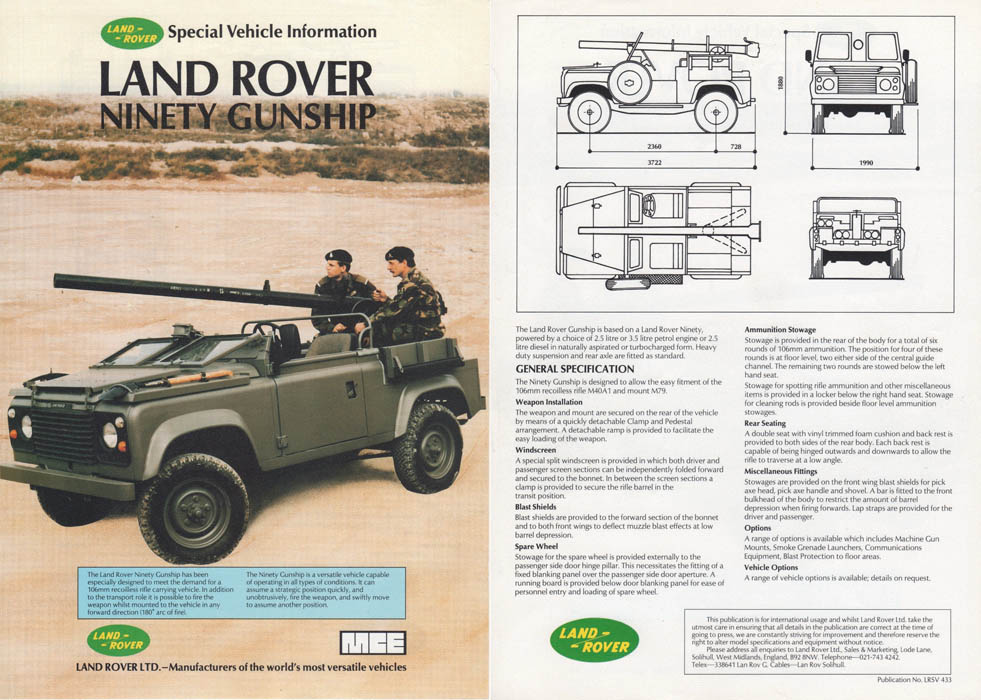 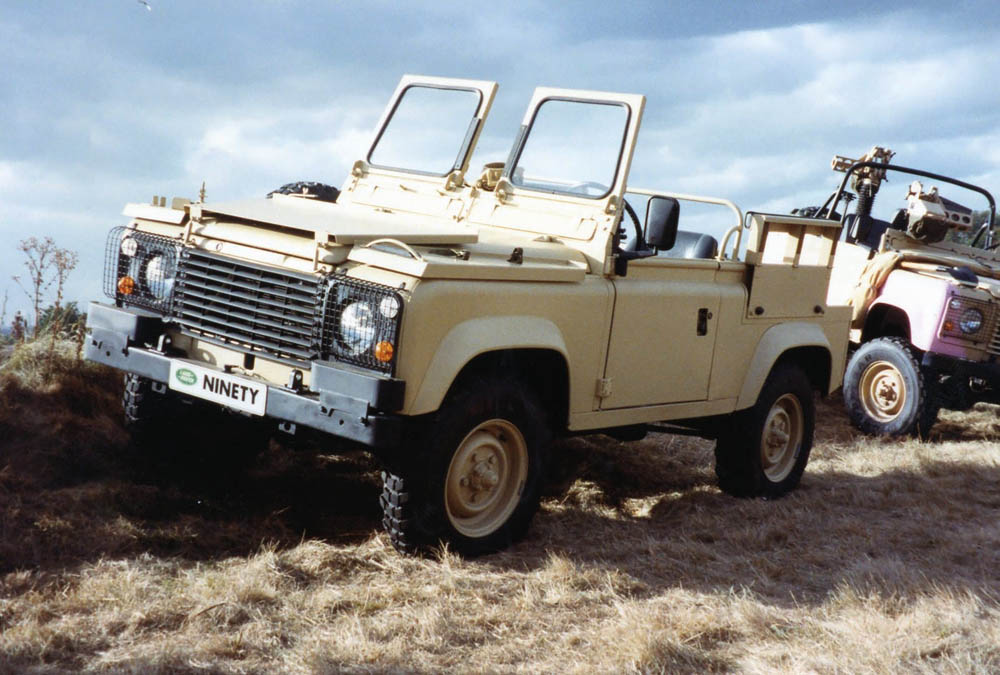 “We don’t know when and in what circumstances Land Rover disposed of the vehicle, but it was first registered in Cardiff in October 1997 with the number R929 RHB. I bought it in January 2013 from the third private owner and he told me that it had been acquired from Land Rover by a specialist, who had rebuilt it after it had suffered a rollover accident while being demonstrated by the company in Peru. Whether this is true or not we don’t really know.

“It is an amazing survivor and something that you would expect Land Rover to have disposed of for scrap, because they would not have wanted it to be released to a private buyer. Over the past few years, researchers have discovered several interesting Land Rovers that were sold by the company for scrap but mysteriously survived intact and were sold on. Perhaps the Gunship is one such vehicle, but we will probably never know the truth. 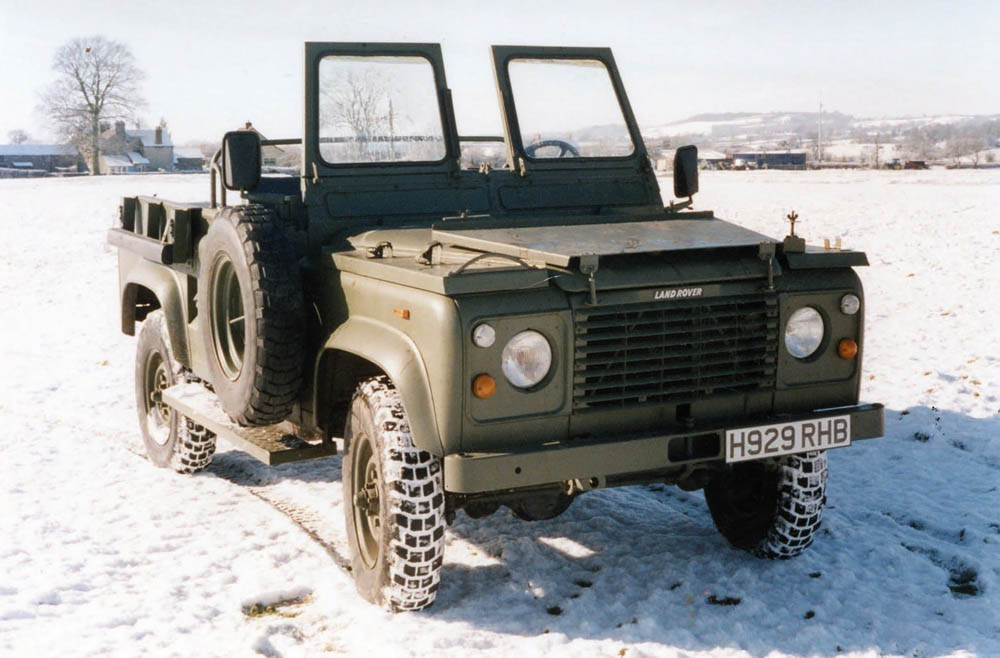 The Ninety Gunship as acquired in 2013 by The Dunsfold Collection

“The last owner removed the non-standard fittings and installed a truck cab and a right-hand door. Thankfully, he retained most of the items he removed. We gave it a light restoration and re-fitted the missing parts, and the search began for a suitable M40 Rifle for it. In the meantime, we managed to source a set of the hard-to-find Michelin XCL tyres.

“Earlier this year we were able to fit the deactivated M40 Rifle complete with tripod and loading ramp. Charles Whitaker, who led the original conversions when he was working at Land Rover, was able to help with contemporary photos that allowed us to fabricate the necessary parts. At last, the Ninety has been restored to its former glory and looks like it means business. I’m now trying to source a suitable .50cal spotting rifle for it. People would often walk straight past it at shows, but there’s no chance of that happening now!”

The Dunsfold Collection relies on the support of Land Rover enthusiasts around the world. You can help by joining the Friends of the Collection or by making a donation. Visit dunsfoldcollection.co.uk