Unlike the Defender model, the Discovery Td5 lacks a fuel filter cover. However a Defender one can be made to fit with a little modification as Trevor Cuthbert shows

This location is very exposed on both vehicles, but Defender is arguably worse because road dirt and water are being thrown directly at the fuel filter by the rotation of the road wheel.

The decision not to fit a fuel filter cover to the Discovery was probably due to the expected use of the vehicle being less arduous than a Defender which often works in off-road situations such as farming, forestry and industry. Conversely, Discovery is most commonly a passenger vehicle used predominantly on road. Also, with the fuel filter located behind the rear right wheel, it is not so directly in the line of fire.

Nonetheless, any of us who are hands on with our Discovery 2 will be familiar with the very dirty and often rusty fuel filter that we’ve had to remove during a fuel filter service. Compare this with the relatively clean used filter that comes out of the engine bay of a Tdi Discovery, and the desirability of a fuel filter cover on Td5 versions becomes very apparent. In fact, since this work was carried out on the Discovery featured here, I have had four further clients requesting the same modification. The job is very straightforward, costs less than £50 and takes only about one hour to complete. 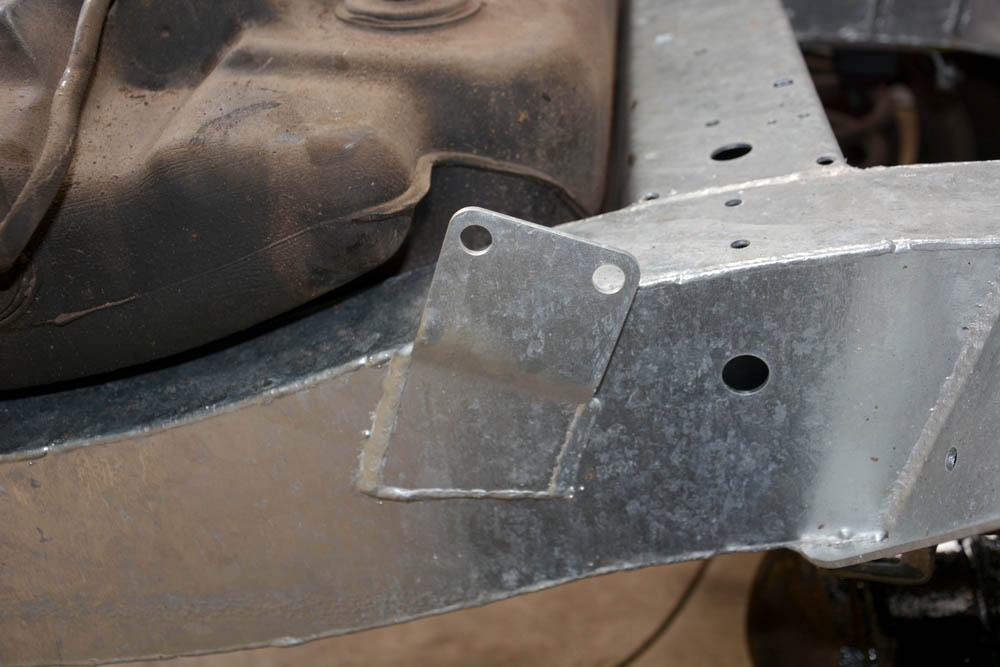 Step 1: The Discovery 2 has this bracket on the chassis to which the fuel filter housing is bolted – exposed to elements just behind the rear right wheel. 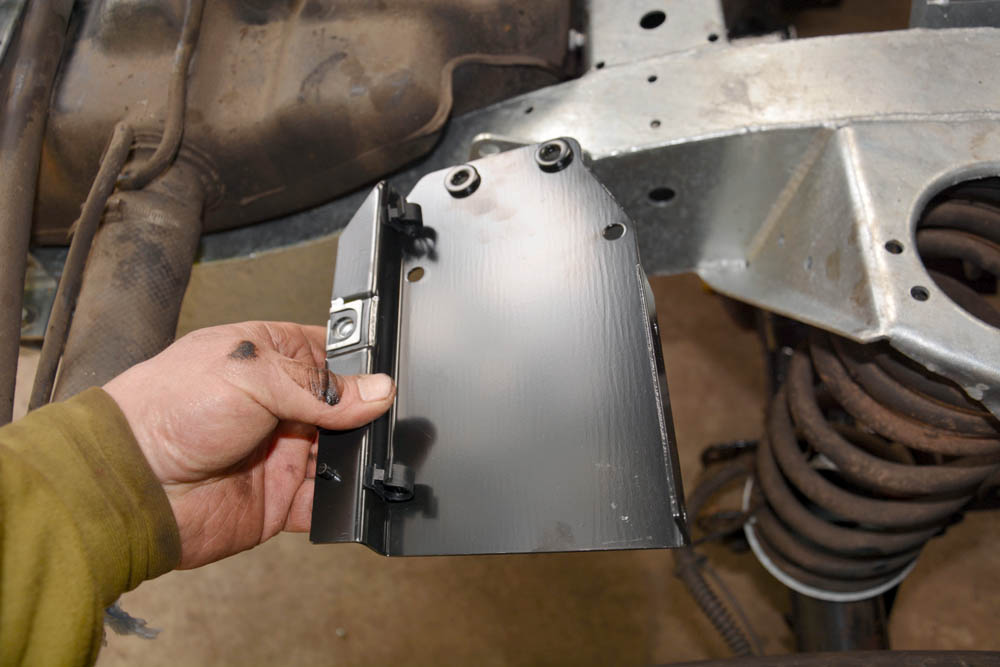 Step 2: This is a new Defender Td5 backing plate that is normally fixed to the chassis by four bolts into threaded holes in the Defender chassis. 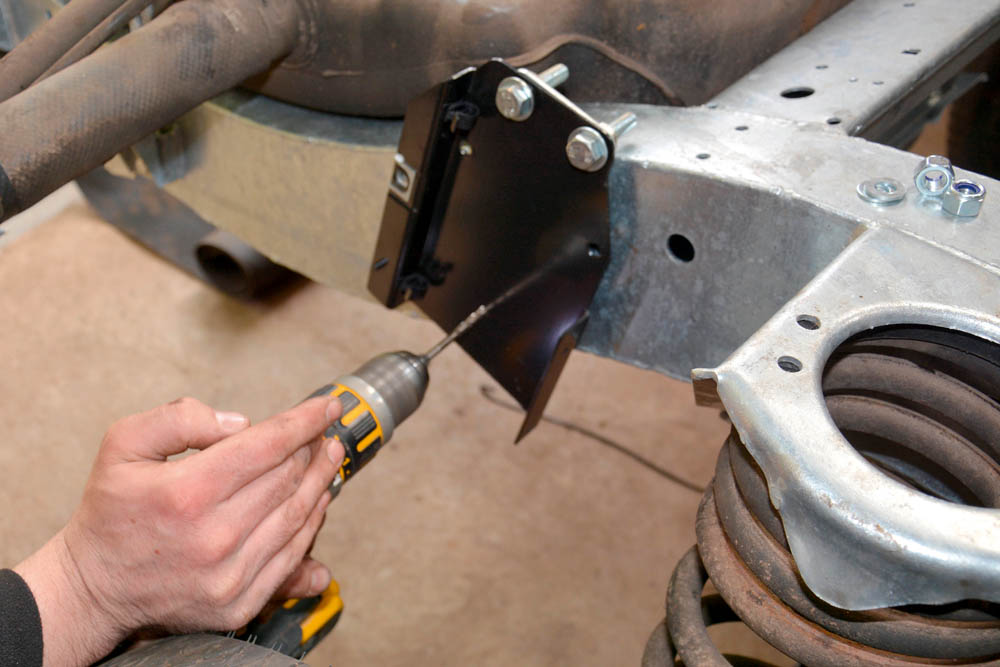 Step 3: The top holes in the Defender backing plate match perfectly with the bolt holes in the Discovery bracket. A further pilot hole is drilled through to the chassis. 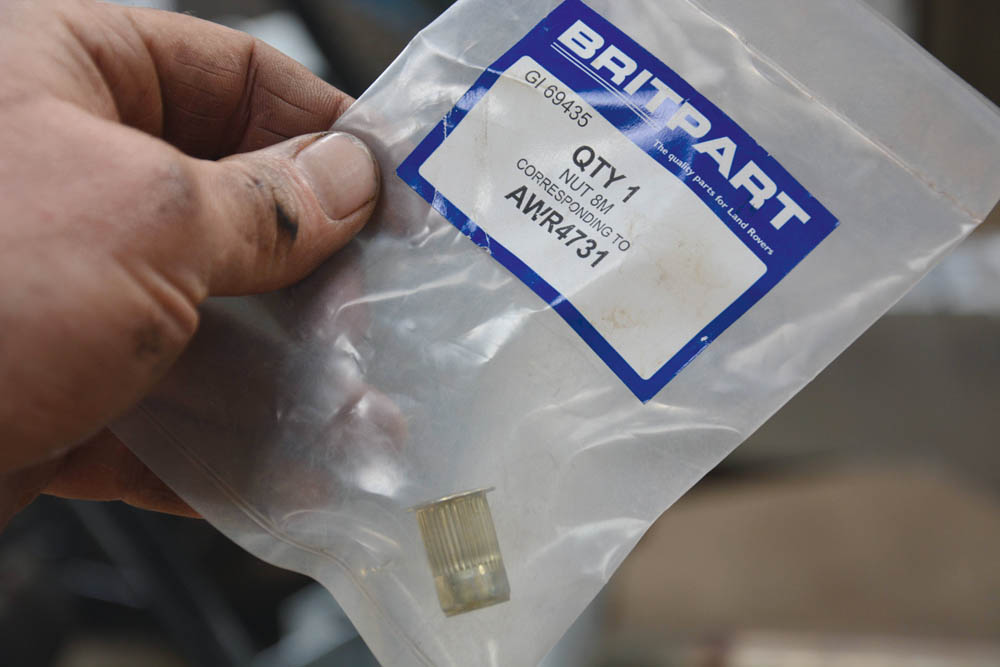 Step 4: An M8 Rivnut is an ideal way to secure the lower area of the backing plate, creating a threaded hole in the chassis for a short bolt. 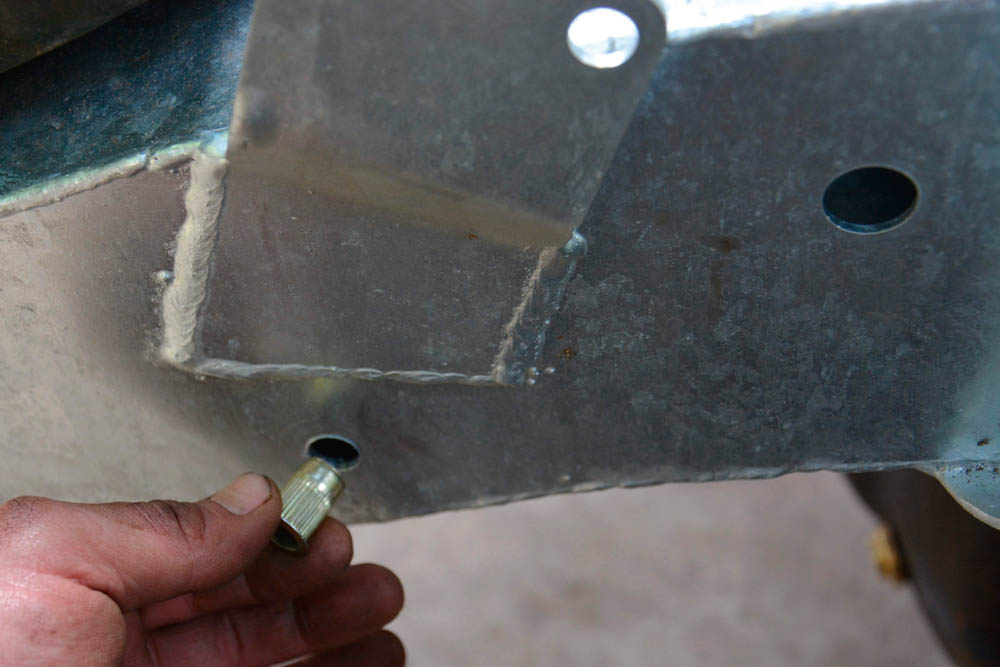 Step 5: The pilot hole in the chassis has been drilled out to 14 mm – just large enough to accommodate this particular Rivnut. 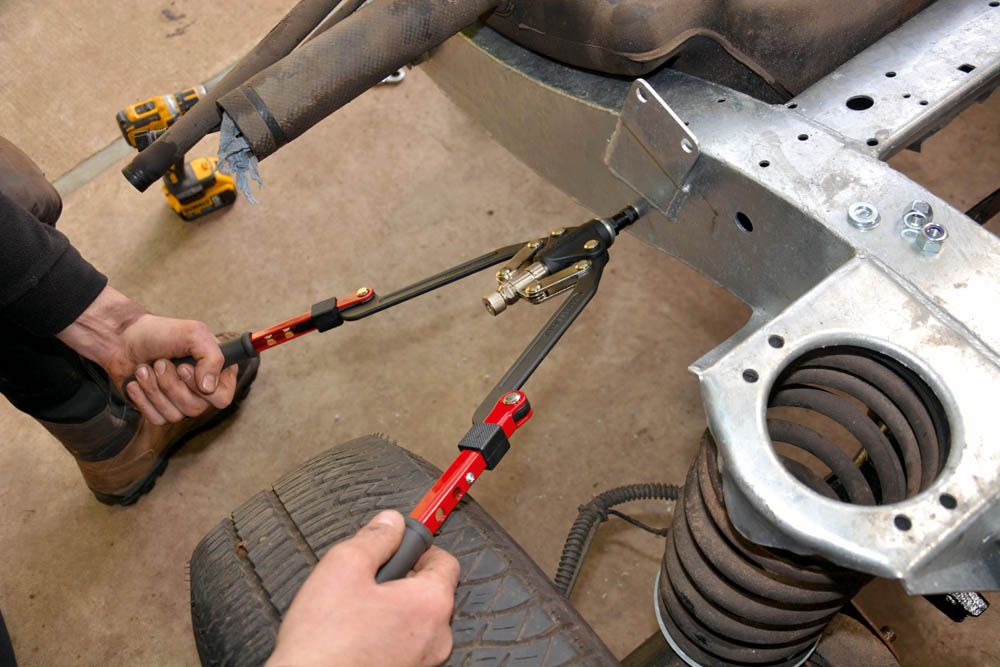 Step 6: Just as with a blind rivet, the Rivnut tool expands the Rivnut inside the chassis, fixing it to the chassis so that it will not turn. 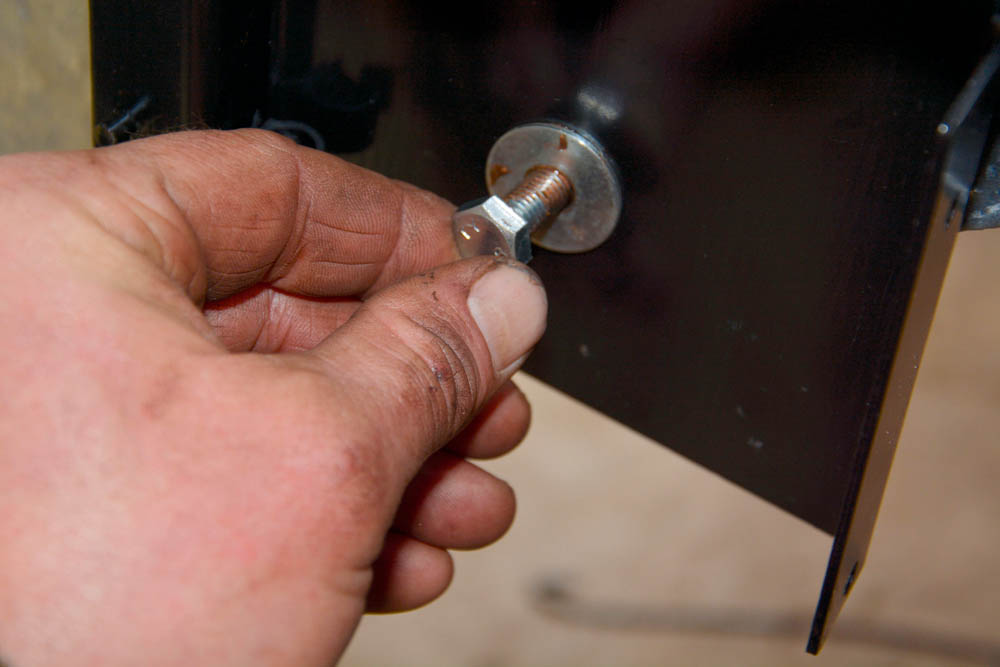 Step 7: With the backing plate in position, an M8 bolt is fitted through to the Rivnut in the chassis. Spacer washers are needed between the plate and chassis. 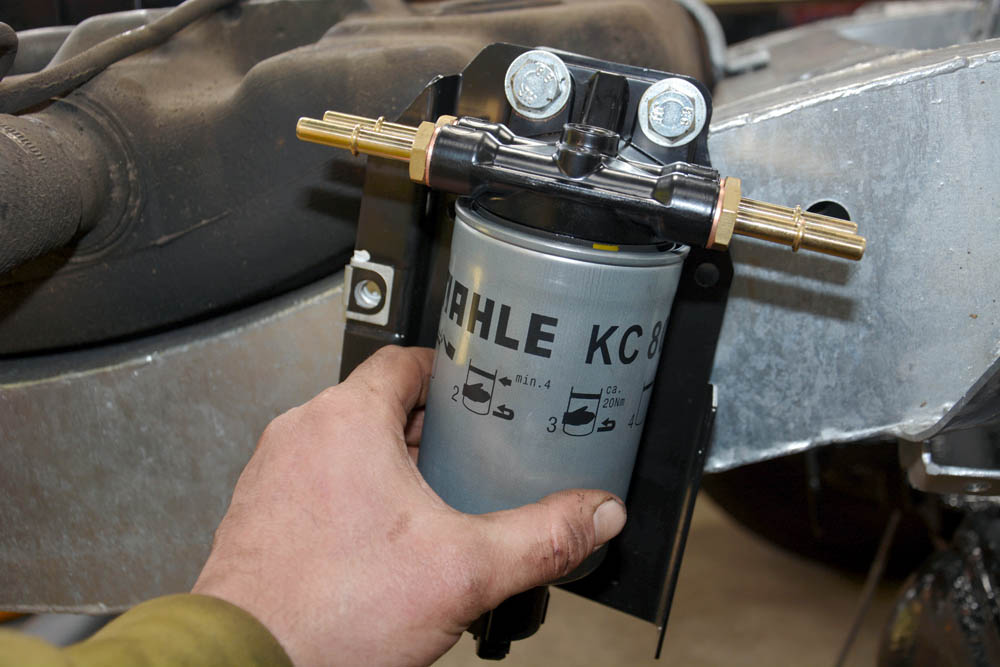 Step 8: This new fuel filter housing and filter is fitted to check clearance with the lower support bolt. It’s actually more firmly fitted to the chassis than before. 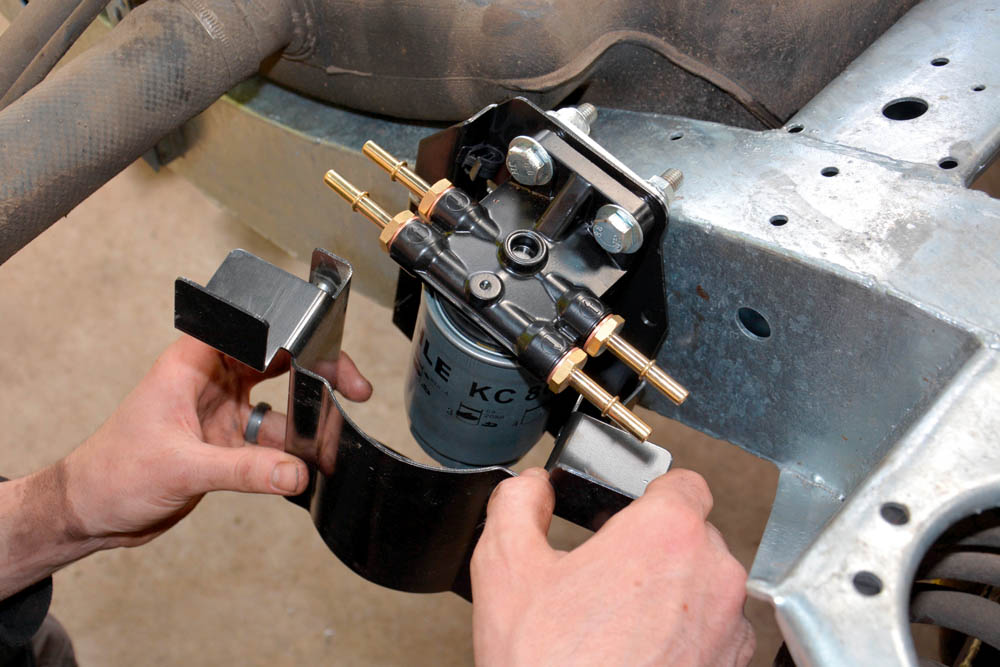 Step 9: The fuel filter cover is offered up to the filter and housing to assess whether the Discovery fuel hoses arrangement will be compatible. 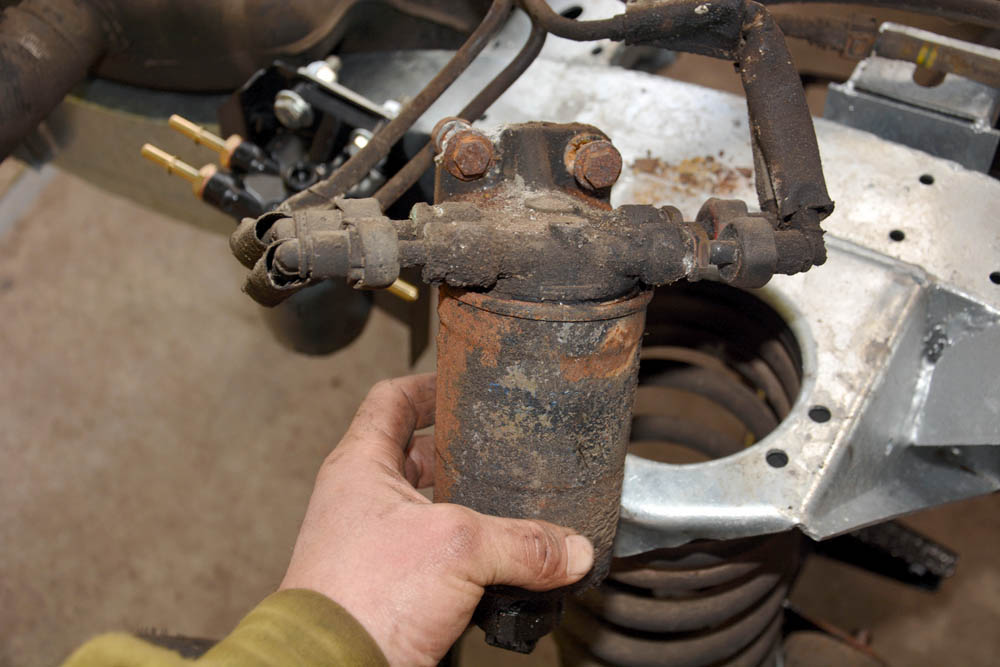 Step 10: There are four hoses attached to the old fuel filter housing, which need to be transferred to the new one in the correct order. 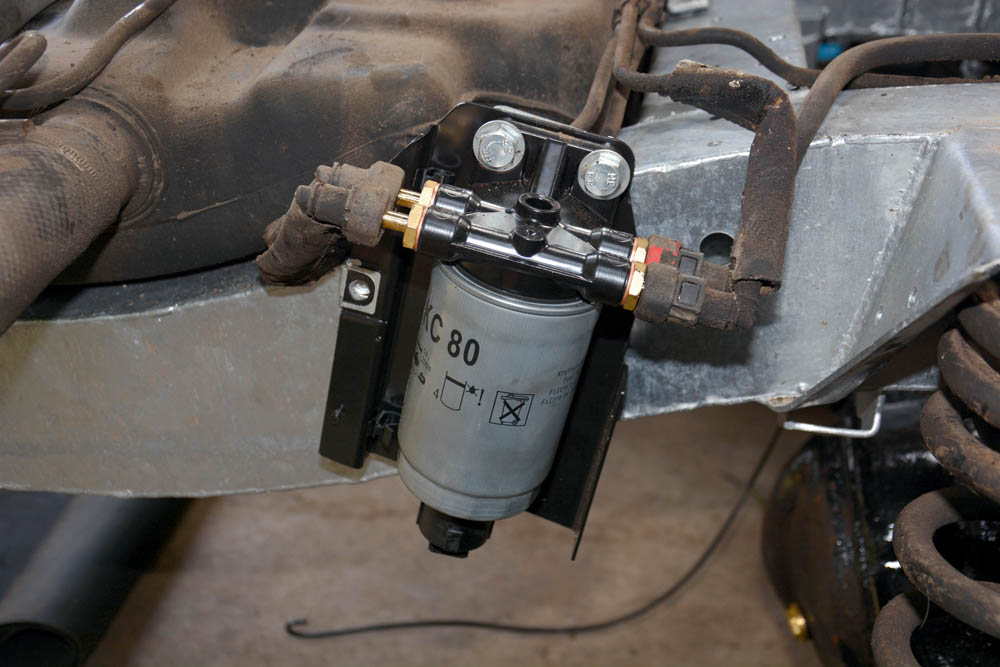 Step 11: The fuel hoses are in place, in the correct order and are routed as they would normally be on the Discovery chassis, ready for the cover to be fitted. 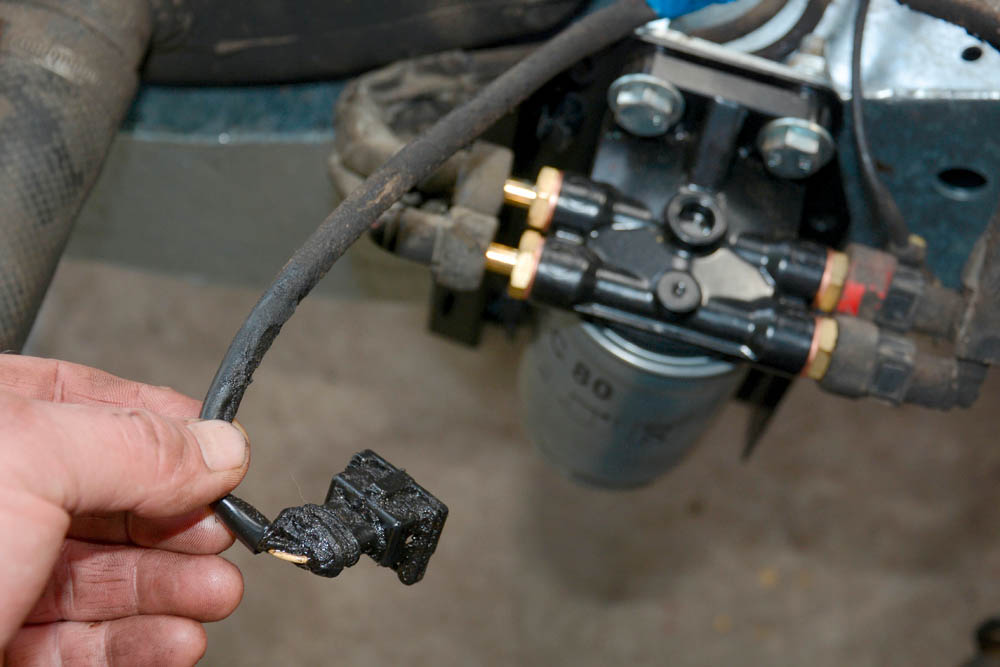 Step 12: There is also an electrical connection to the bottom of the fuel filter, which is for the detection of water in the fuel – giving a warning at the dash. 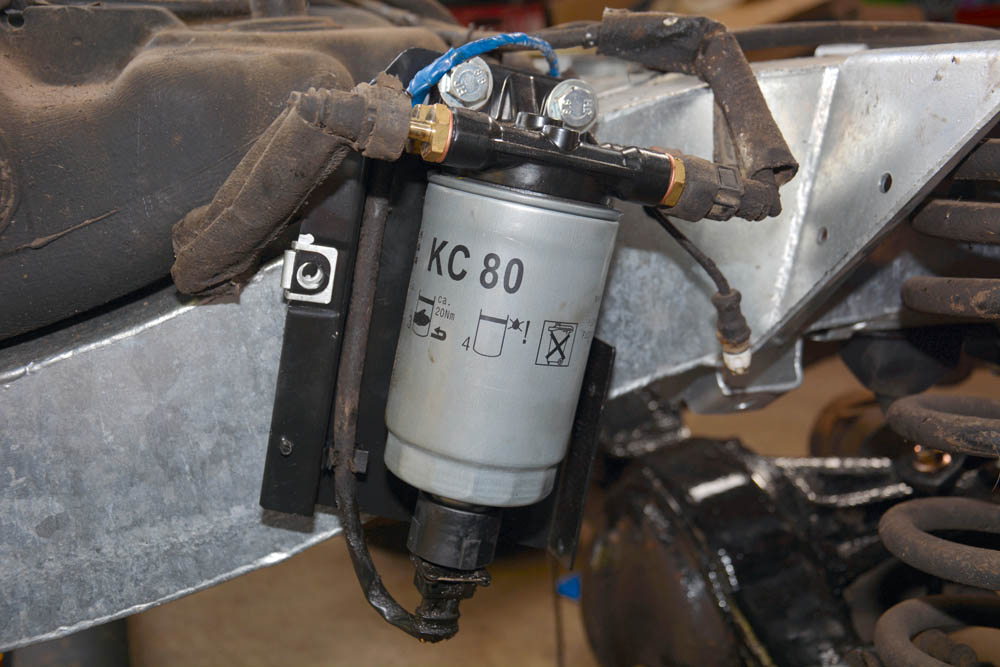 Step 13: The electrical cable for the water detector is routed over the backing plate and the plug connected to the socket on the bottom of the fuel filter. 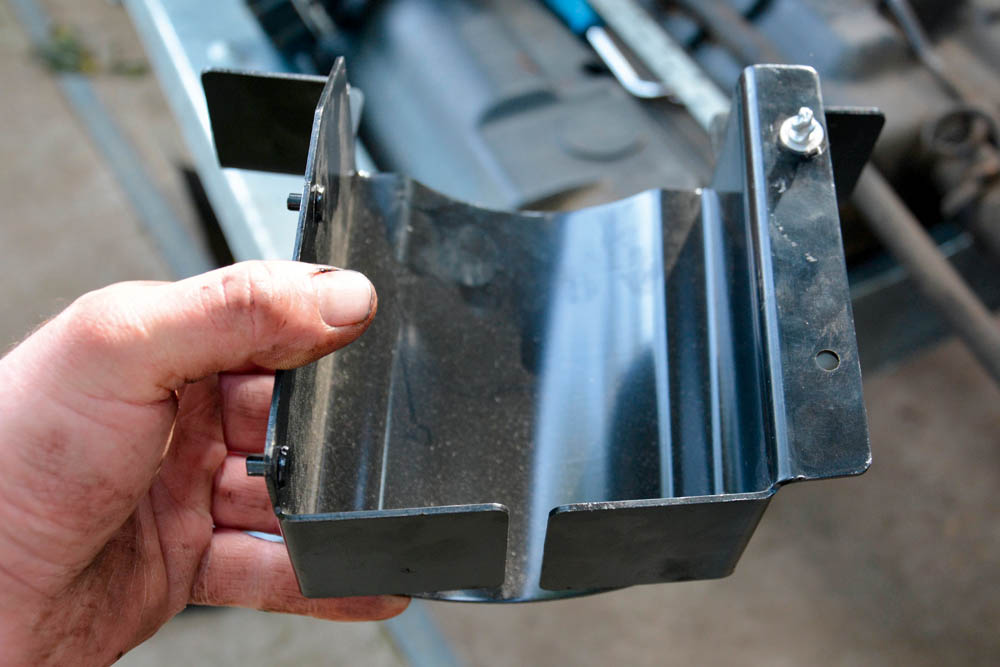 Step 14: The fuel filter cover in standard form is clearly too short to accommodate the length of fuel filter and the electrical connection together. 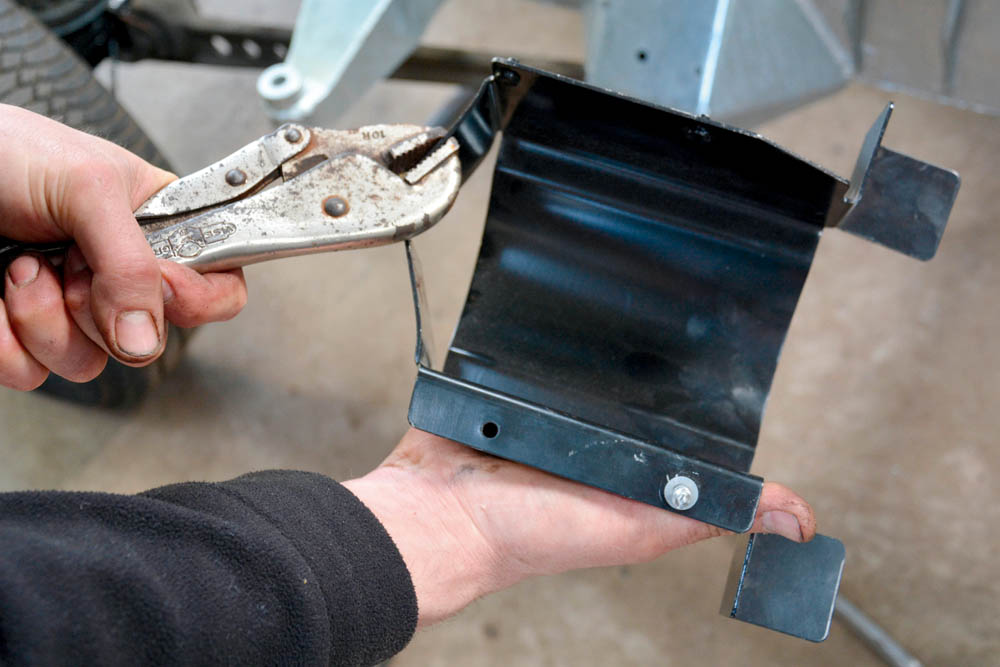 Step 15: Rather than cut the lower tabs off, we opted to bend them downwards just enough to clear the electrical connection, so they remain to provide protection. 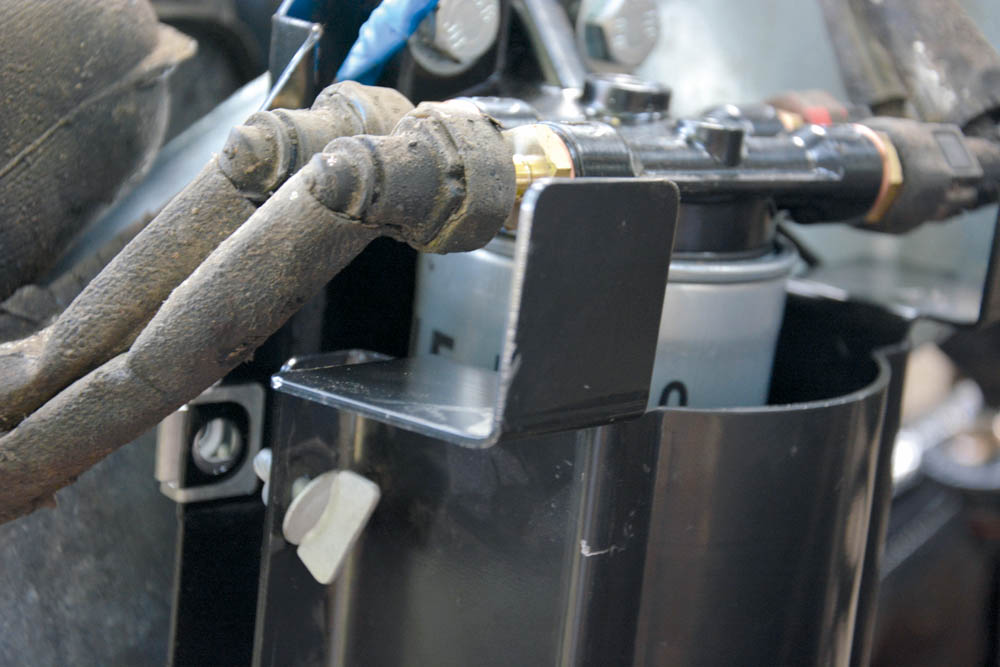 Step 16: The filter cover is again offered up and it is clearly not going to close properly, as it fouls the rearmost fuel hoses. 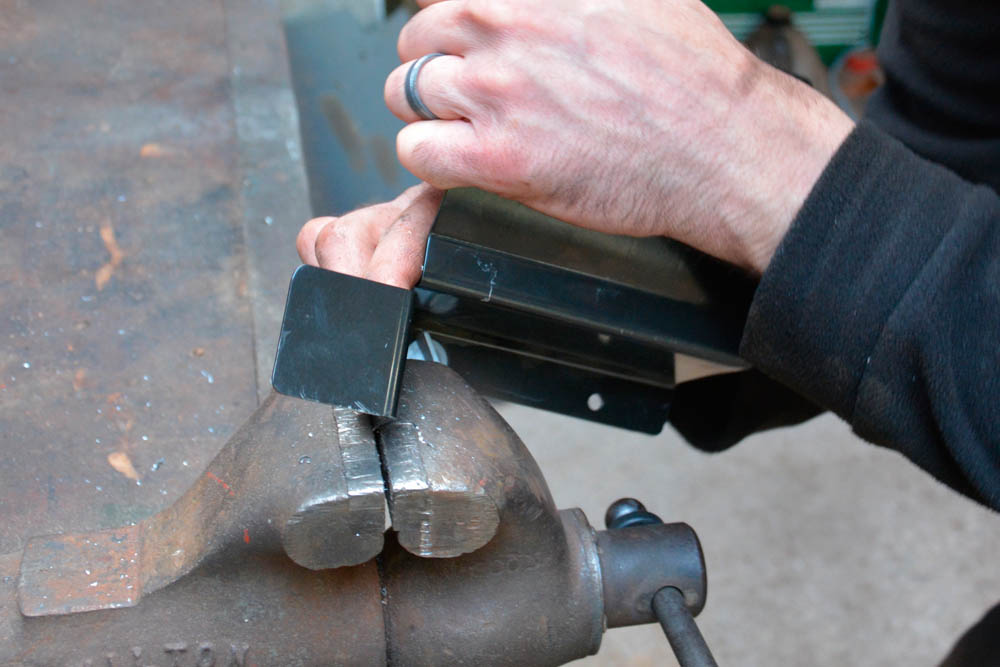 Step 17: The area of the filter cover that fouls with the fuel hoses is bent downwards using the bench vice – rather than cutting the area off. 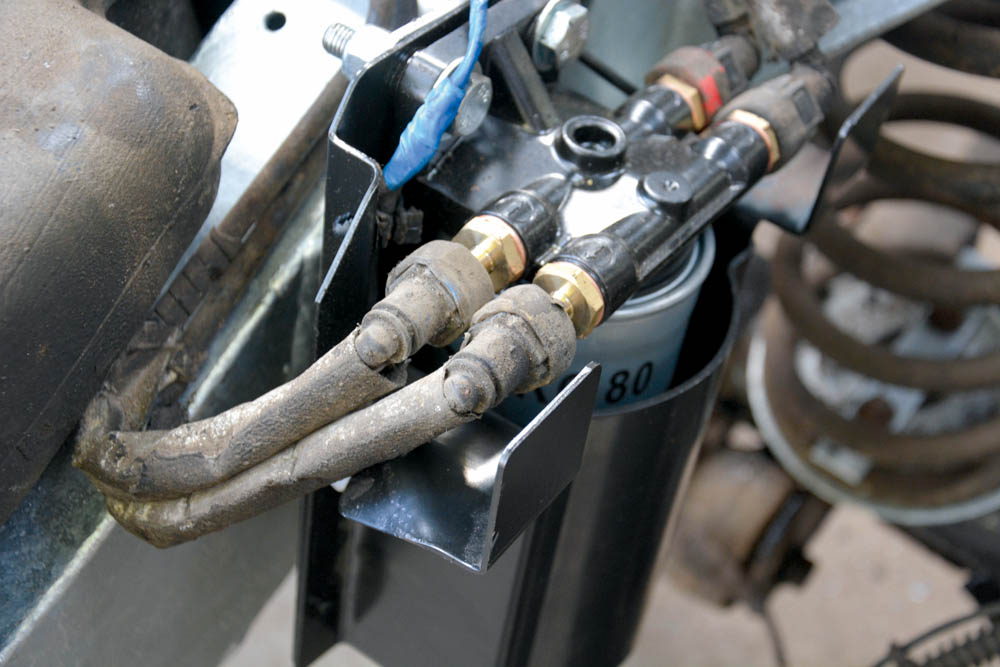 Step 18: Now that the filter cover has been simply modified by bending the tab, the cover fits onto the backing plate properly – and can now be securely locked in place. 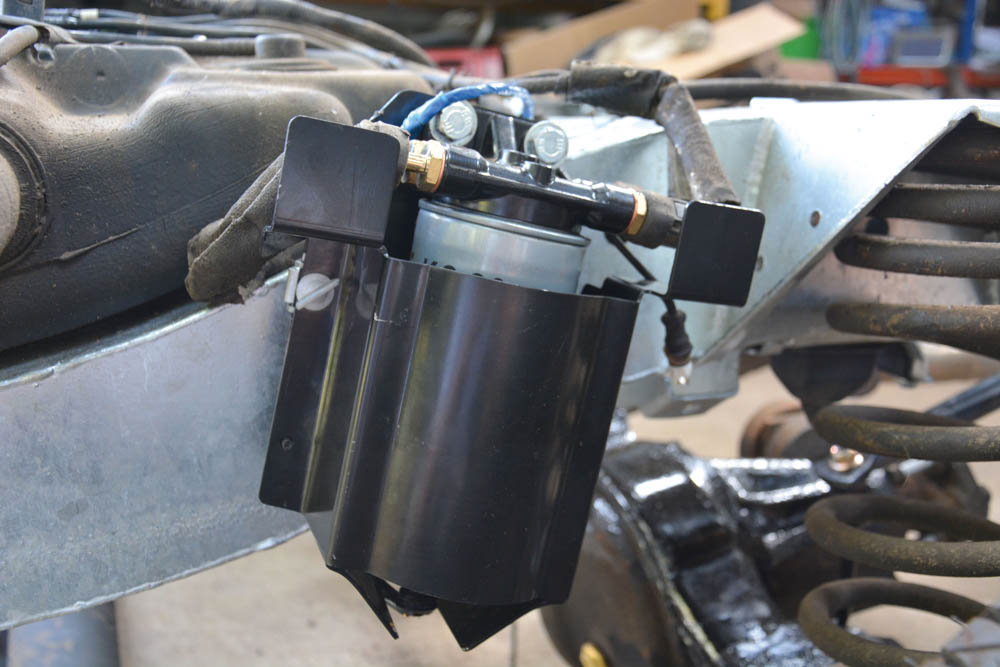 The completed job – a few minor modifications has allowed the Defender backing plate and cover to fit the Discovery and provide some protection for the fuel filter.