They Dreamed. They Dared. They Lived it. We were expecting some big life experiences.”: Petr Fiala, driver of this 1960 Series : credit: © Ricardo Leizer/FOTOP

Imagine the scene. You are eating breakfast in the Dakar Rally paddock in Saudi Arabia where you have just finished competing in your fifth Dakar.

It is January 2021 and for the first time the event has run a Classic category and your fellow Czechoslovakian countrymen is inspired by a Skoda taking part. As you finish your pancakes and sip the Arabic coffee, a thought flashes into your mind… You have a Series II Land Rover at home, not really used it in ten years, but hey, it would be the perfect vehicle to do the Classic in.

Of course, this is just a fantasy, right?

Wrong. This is exactly what happened to Dusan Randysek, and he made his fantasy come true. Not only that, but he also persuaded some of his friends to participate with a Series too. 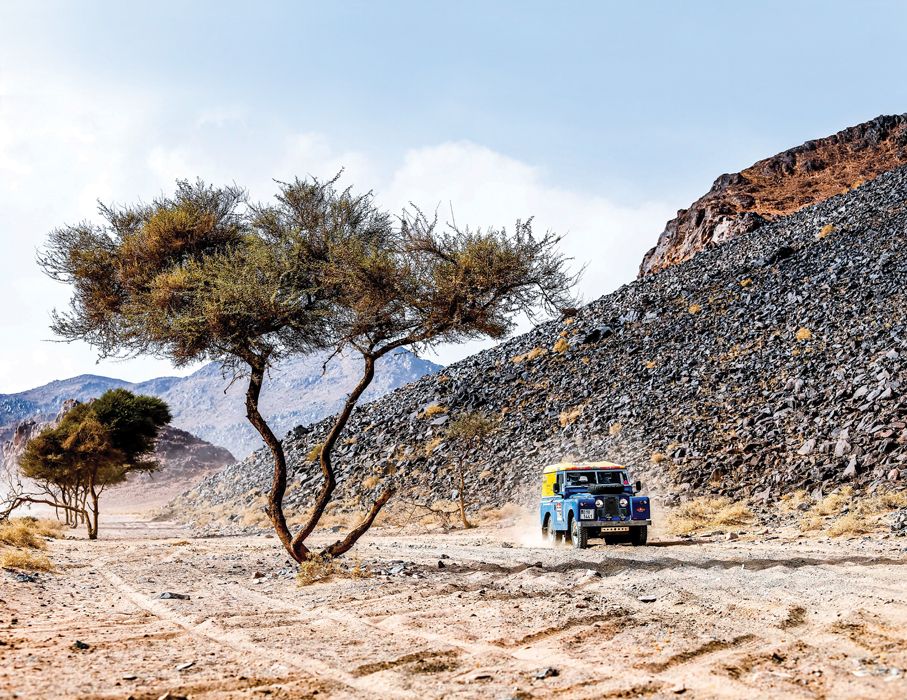 On arrival back in Czechoslovakia he enlisted the help of friend, Petr Fiala, and set to work. Unfortunately, making fantasies come true isn’t as simple as imagining them.

The first problem, which was a fairly major one, was a Series II didn’t actually fit the entry criteria. This required a persuasive letter to David Castera, Dakar director, who was initially incredulous. Too old, too slow, too uncomfortable, this is insane. But on the other hand, if they can actually do it, it would be a great Dakar story. We’re guessing that’s how it played out in Castera’s mind: however he justified it, he gave them the green light.

Another pair was added to the team – together with a Series III, although ultimately this one didn’t make it to the Dakar –and the builds began in spring 2021. The idea was to use as many period parts as possible, and Dusan called on the assistance of the Czech Series II Club to make this happen, along with help from Ondrej Pavelka and his connections to the Series II Club in the UK. 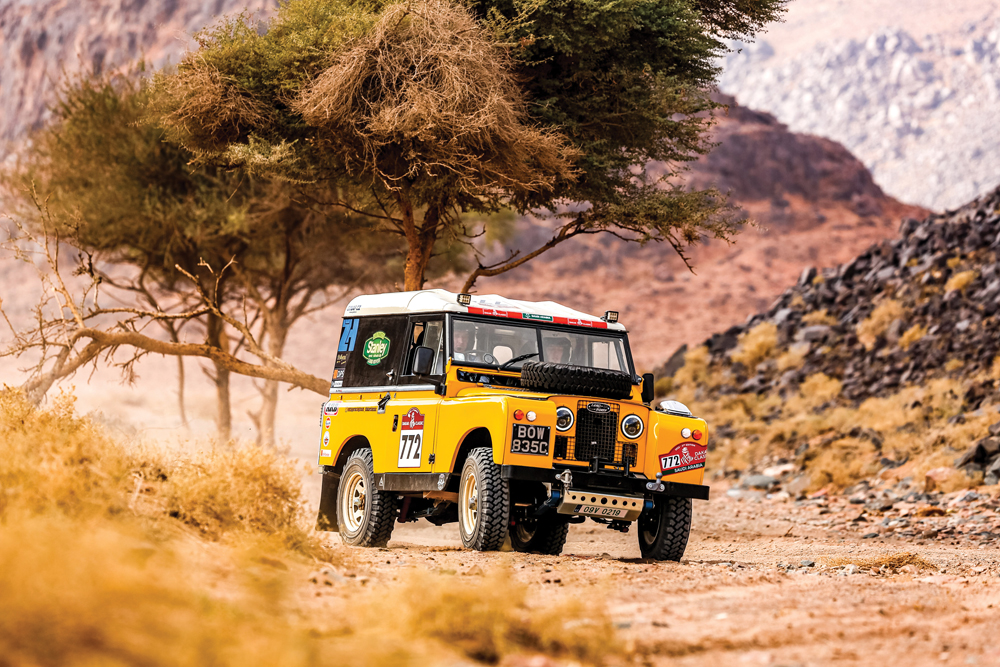 The Dakar Classic isn’t about speed, it is a regularity rally

Sourcing parts from the UK post-Brexit was challenging and caused delays, not to mention there were specific safety requirements that had to be met for FIA rules. A particular problem was that four roll-cages were ordered but due to the fabled uniqueness of each Series chassis, only one actually fitted without extensive modifications. Other parts such as the suspension could not be modified from original under the category rules.

The blue Land Rover, Cecil, was the last to be completed – literally just a week before the cars had to go to Marseille for shipping. The knock-on result was that for the drivers and co-drivers time in the cars and time to test and tune them was severely limited. Aleš Kautský, President of the Czech Series II Club recalls that maybe only 60km of test driving was completed. It also revealed that none of the crews really had any Series II driving experience…

References for what to take in terms of spares for a gruelling desert rally could only really be gleaned from Series II overlanders and 60 years of owner experiences of the cars’ strengths and weaknesses, as this was a completely new venture. Additionally, the budget didn’t extend to a mechanics team so they had to service their own vehicles and carry everything themselves too, including camping gear. 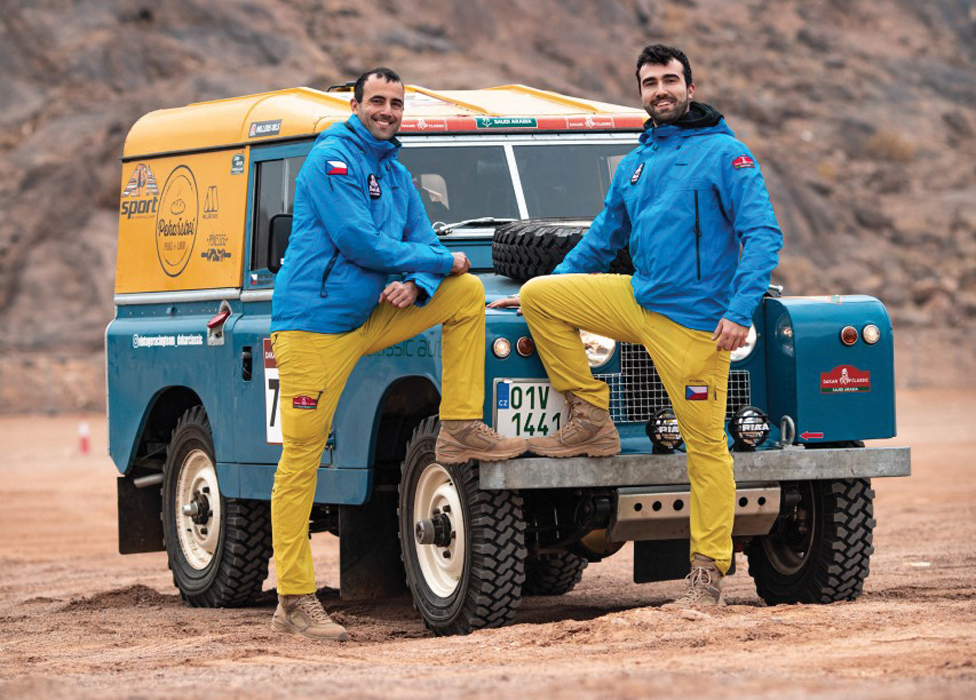 Albert and Stepan Pance with 'Cecil' 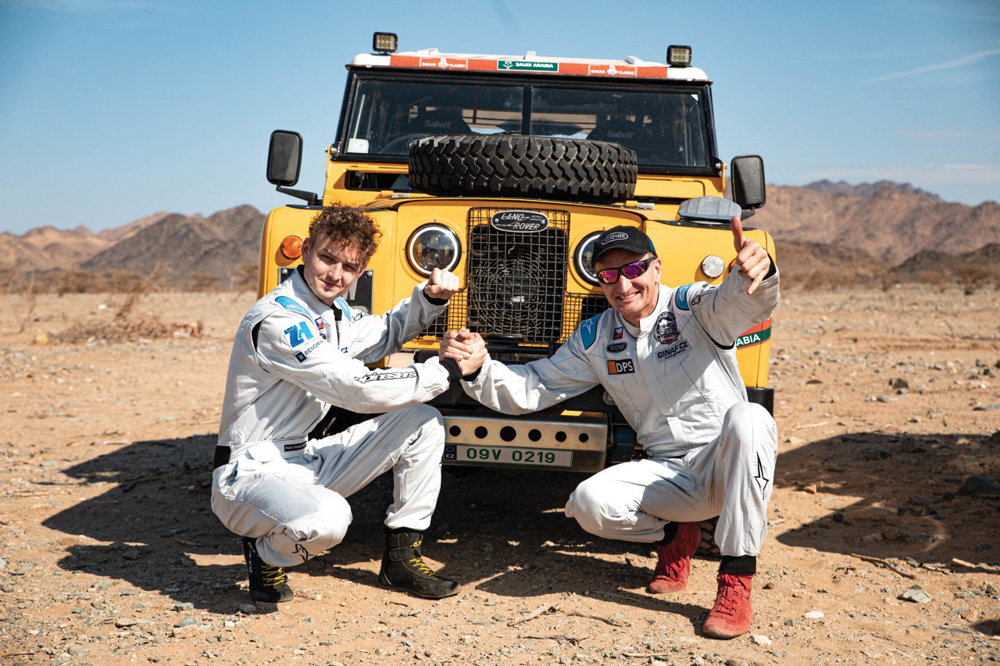 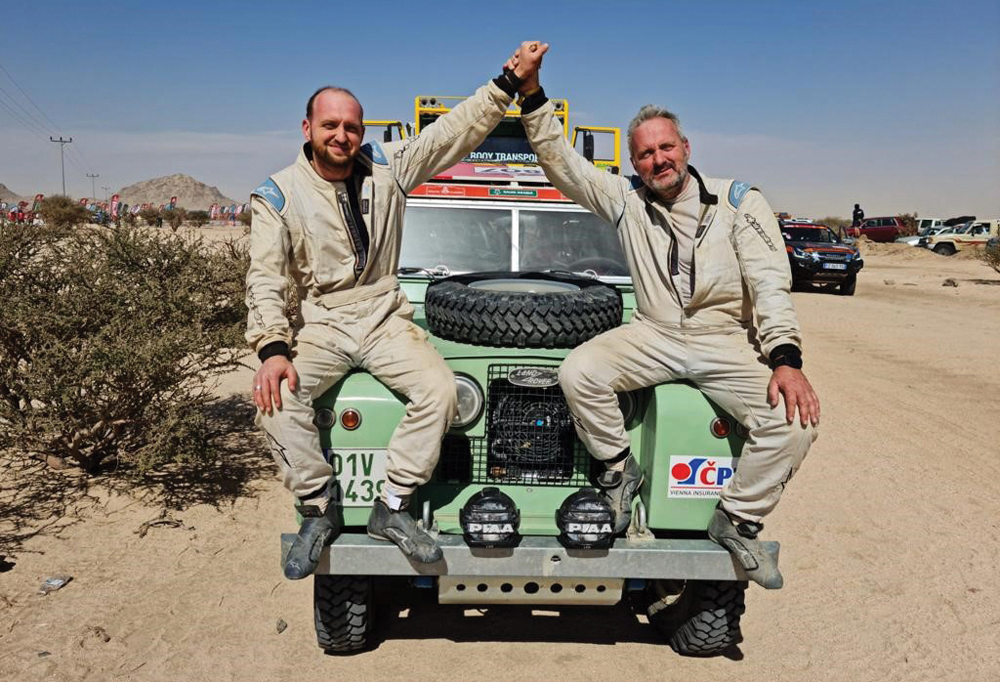 Nearly a year after Dusan had the idea, the three Series II Land Rovers, and their crews, Dusan and his son Frantisek, Petr Fiala and son Tomas, and brothers Albert and Stepan Pance, lined up in Jeddah to start the most extreme rally in the world. Thousands of kilometres of desert driving awaited, together with road sections interspersed with dunes, rocky passes, corrugated tracks, dust, more dust, extremely hot days and perishingly cold nights.

After a promising and solid start to the event, with the eyes of the worldwide Land Rover community on this incredible endeavour, the problems started. Cecil suffered a broken valve spring and they didn’t have spares. After initially finding similar springs from a different car locally in Saudi, which eventually failed too, the Land Rover network mobilised to help. Faisal Al-Osaimi from Landy Care Overland was local and provided parts and assistance, but with breaking springs becoming an almost daily occurrence, Rory Lowther from Off Road Worldwide joined the effort, arriving from the UK with the toughened springs that ultimately solved the problem. 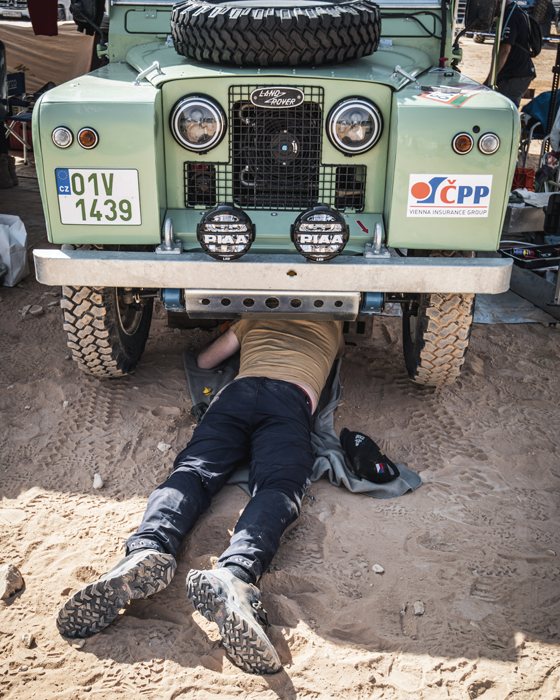 But it didn’t end there. Ladinek, the yellow car, started having issues with the freewheeling hubs. The long-term result was the car being two-wheel drive and, on one occasion, only one-wheel drive when a driveshaft broke! In case you are wondering how that is even possible, by a lucky miracle this car was the only one using an ARB locking diff. The team was carrying plenty of half-shafts so it was easily fixed, but although they had a spare differential they elected not to change it.

Don’t forget that it was the crews themselves that were doubling up as mechanics after the stage, and at some point they needed to sleep, too.

Then Cecil, dubbed by the team as ‘the troublemaker’, added a fuel pump failure to their woes. This called for some creative bush repairs from the crew to try and keep going and at one point they posted a video of themselves using a syringe to feed fuel into the system while driving. Again the call went out for a suitable pump, and once again it was Rory to the rescue after they tried a more modern high-pressure pump which just didn’t work with the old engine. 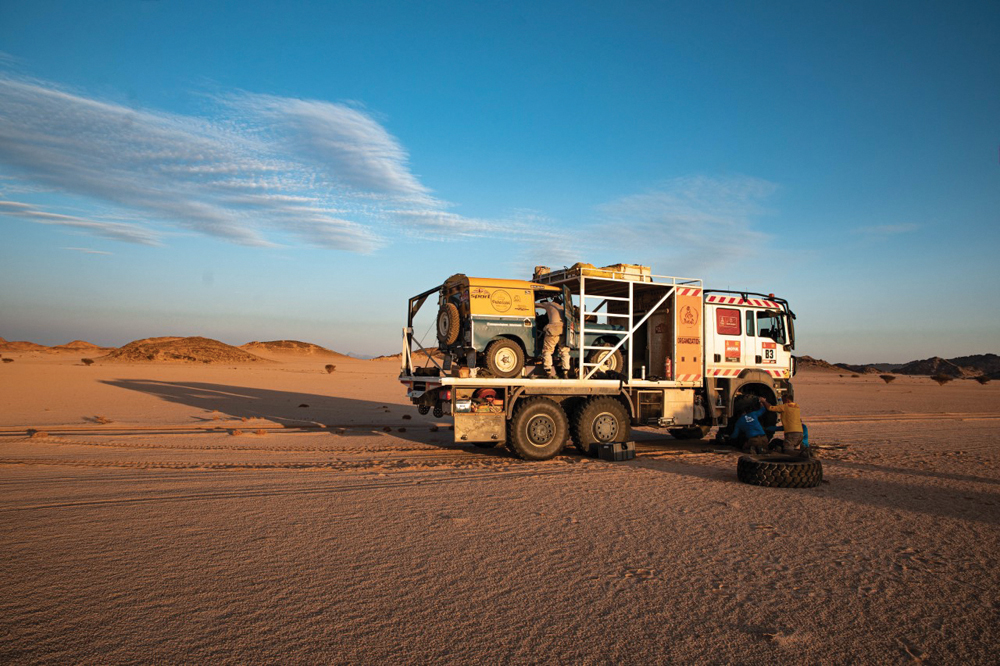 In another cruel twist of fate, on stage eight the recovery truck carrying Cecil back to the bivouac had a puncture which took three hours to fix. By this time, the cars had attracted a huge following and everyone was on the edge of their seats.

By Stage 11 it looked as if the end was in sight and the dramas were over, but Ladinek had other ideas and broke a parabolic spring. He completed the final stage of the rally with another bush repair involving a strap and a block of wood.

But, incredibly, and to everyone’s delight, all three cars from the sixties and their crews made it through the spectacular Saudi landscapes back to the finish in Jeddah. 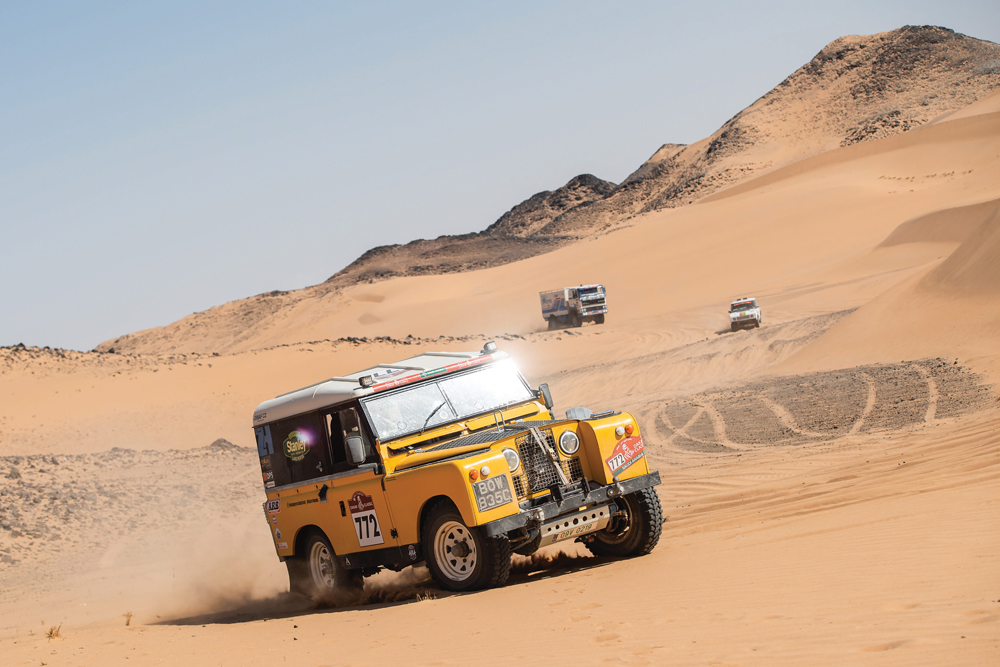 They didn’t win but they did all finish, and in doing so completed a truly remarkable and inspirational feat, against all the odds. Those Series IIs and their team members are now part of Dakar history, part of Land Rover history, and most importantly they have created the most fantastic memories for those directly involved in the racing and for the whole Land Rover community.

As Stepan so wistfully put it, “old cars always have issues, but it’s actually the days when you have to solve problems that stick in your memory.” We couldn’t agree more and that’s why victory mattered not, when there are stories to last a lifetime.

About the Dakar Classic
A new Dakar Classic class was introduced in 2021 for cars and trucks manufactured before 2000. Still run by the Amaury Sport Organisation, the category pays tribute to the pioneers of rally raid.

To that end the event welcomes vintage vehicles that would have competed in the Paris-Dakar, as it was then known, or similar events during the 1980s and 1990s, as well as period-accurate replicas.

While the classics don’t face the same challenges as the modern competitors, they share the same bivouac, start and finish points and run on a ‘specific and dedicated parallel course’ to the Dakar Rally. Also, rather than going flat out against the clock, it is based on a regularity rally point scoring system.