My Land Rover changed my life Given its RAF heritage, an airfield was the perfect place to take these photographs of Tom's high-flying resto : credit: © Max Brown

Tom Davies was told he’d never do anything with his life. This amazing One Ten is his answer. It’s more than a Land Rover – it’s one man’s redemption. And this is his story…

The world can be a cruel place and nobody knows that better than Tom Davies. The 34-year-old service engineer has learning difficulties and has suffered cruel taunts all his life. But he answered his critics by creating his dream Land Rover – the stunning One Ten you can see on these pages. 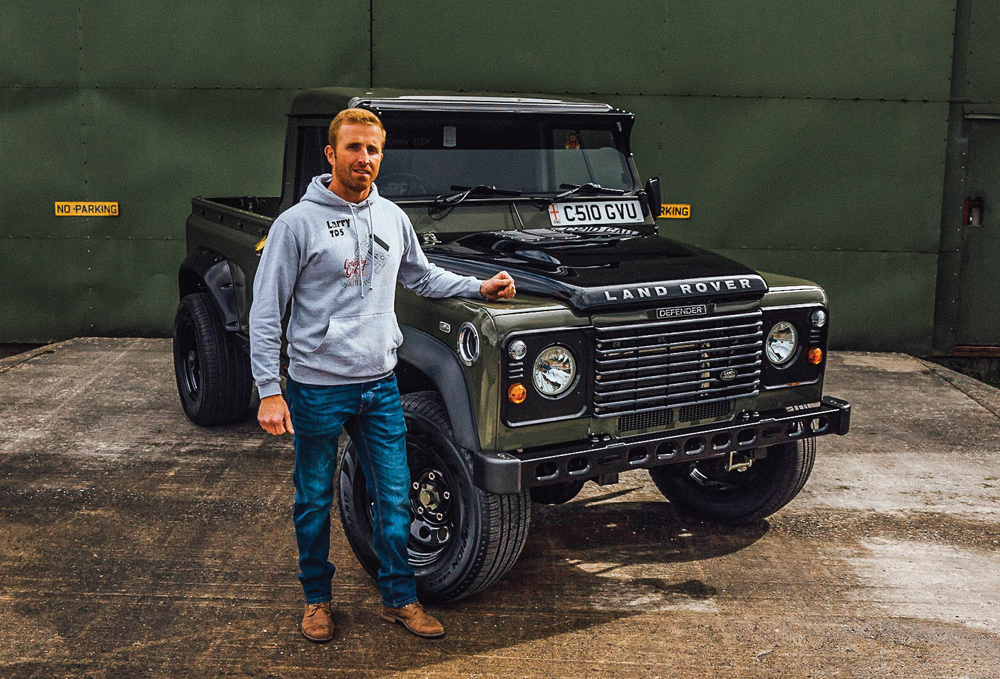 It looks amazing, but this is not just another tarted-up Defender. For starters, there’s a mind-boggling 5.9-litre truck engine under the bonnet. What started out as a battered ex-military One Ten was transformed by Tom out on his driveway in Shrewsbury, in all weathers. It wasn’t easy, but Tom was used to things not being easy. It’s been the story of his life, in fact.

“I have learning difficulties” says Tom. “Everyone has their daily struggles, for me suffering dyslexia led to anxiety and depression. If you ever feel that mentally you’re not good enough or can’t do something – that’s me. My previous boss told me: ‘You’ll never make anything of yourself', but that was a trigger for me…” 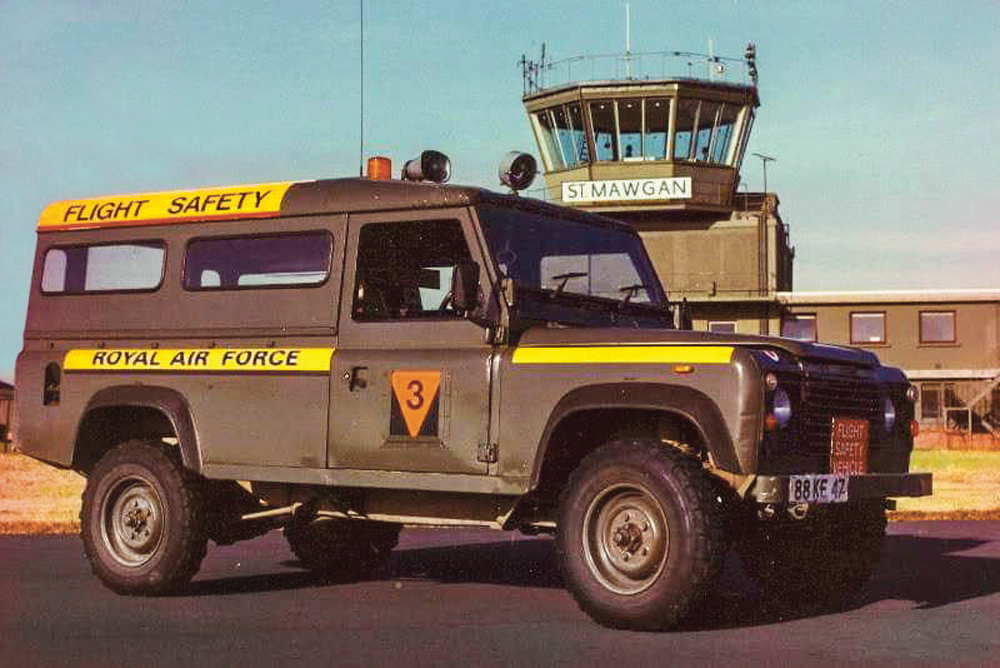 Tom's Land Rover during its early career with the RAF

Land Rovers have saved many a life over the years. The armed forces and the emergency services, for example, put them to work doing just that. But, quietly, Land Rover ownership has saved a few souls, too. Souls like Tom, who was determined to show the doubters just what he was capable of.

“I’ve always been a Land Rover fan,” recalls Tom. “My best friend at school, James Hopley, bought a Defender 90 as his first car and we went everywhere in it. I decided that one day I would get one too.”

Fast forward to 2008, by which time Tom was working as a tractor driver, where he got to appreciate the immense torque provided by the Cummins diesel engine in his Case 5150 tractor. Says Tom: “My mate Craig Bolas and I are always bouncing ideas off each other and one night he showed me a YouTube clip of a Land Rover with a Cummins engine. I decided there and then that I would have to do that.”

Craig began the search for a Defender – and a Cummins engine to stick in it. The engine came first. Craig found a Cummins 6BT engine advertised locally and snapped it up. 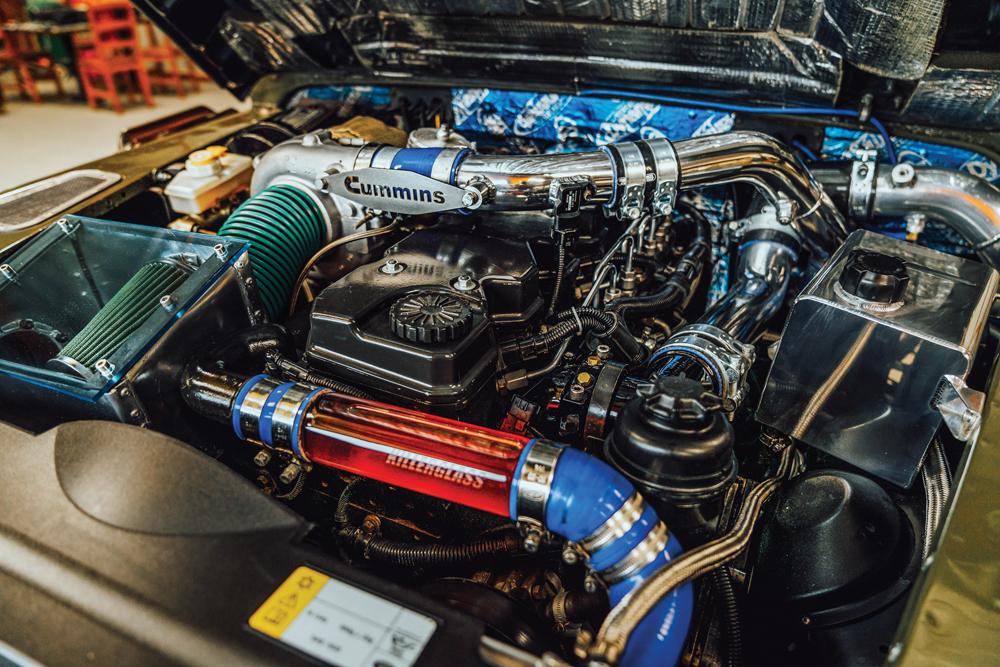 Cummins and goings: this beast is mighty powerful

Cummins was founded in America in 1919 and is famous throughout the world for its big diesel engines. The 6BT engine was introduced in 1984 and originally designed for agricultural equipment, but in 1989 US truck company Dodge teamed up with Cummins to offer the six-cylinder 5.9-litre engine in their heavy-duty Ram pick-up trucks. It soon gained a reputation for power, reliability and durability – with some engines reported to have covered more than one million miles. No wonder Tom wanted one.

With the engine sorted, Tom started looking for a suitable Land Rover to convert to Cummins power. He found it in the winter of 2008, and ironically it was originally a life-saver... 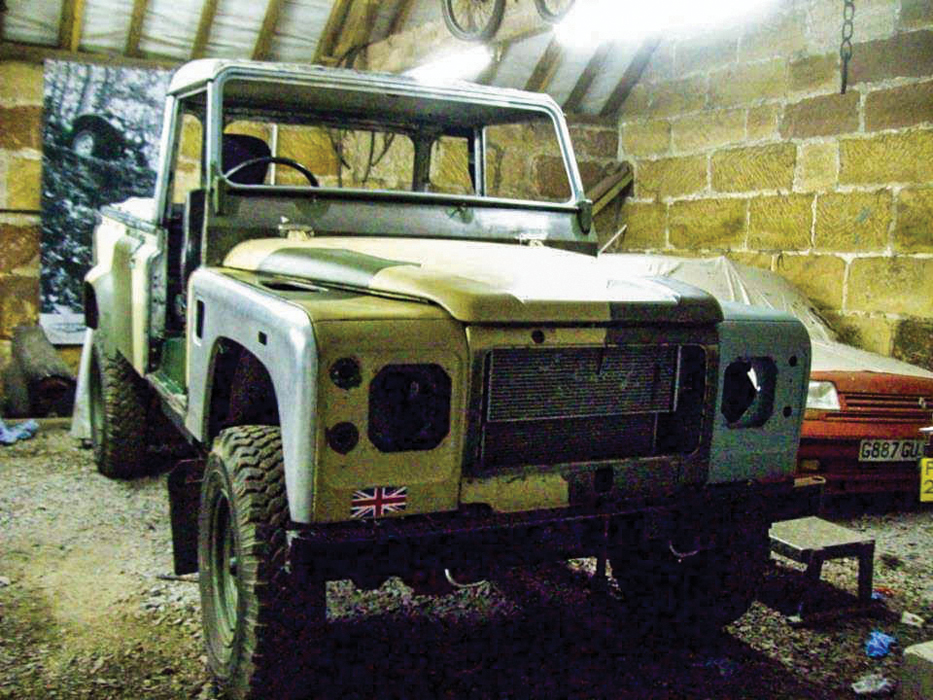 Flashback to the early days of Tom's project​​​​​​

“C510 GVU came up locally. It was a 1985 One Ten that was not in a good way,” says Tom. “It was solid enough, but someone had roller-brushed it with household paint! I do have the full history of C510, as it was originally ex-military and used for bird scaring at RAF St Mawgan in Cornwall, when its registration was 88 KE 47. It was in service until about 1993.

“More recently I went online to find out more information and managed to track down Chris Williams, who used to drive it at St Mawgan. He sent me photos and stories of the Landy when it was in service. It was terrible for me to have to tell him what I had done to it in my ownership, but he was more amazed it was still going strong!” 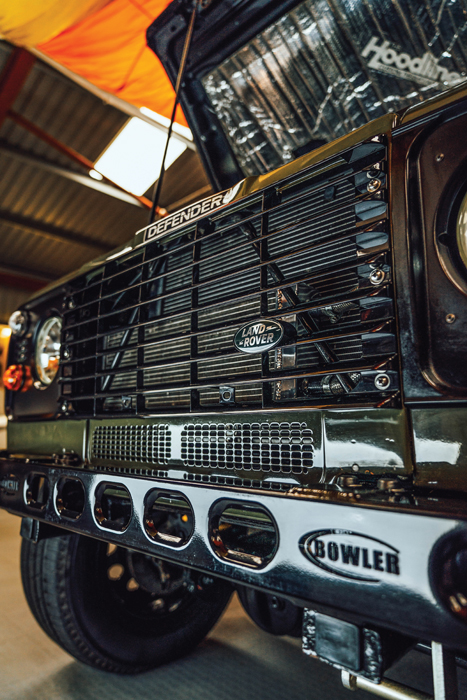 In the 13 years that have followed, Tom has transformed the old ex-military One Ten into a head-turning beauty, with a beast under the bonnet. That work – all done outside on his driveway, don’t forget – included bobtailing the rear to reduce the overhang and converting from van body to truck cab pick-up. “Everything you see I have done myself. Every day has been a school day!” laughs Tom.

One of the biggest jobs was shoehorning a Cummins engine – all 40 inches of it – under the Defender’s bonnet. Amazingly, he didn’t just do it once, either, as he explains: “C510 has had a number of different configuration of the 5.9 Cummins in my ownership, sticking with what I had at the time or could afford.“

The engine that’s in it now was originally fitted in a Jackal Mk1, built by Supercat. It’s a Cummins 2008 ISBE 5.9-litre, which originally had a low-spec rating of 185 hp. I had this engine sat in my shed for over six years just in case the original 5.9 24-valve P7100 engine that I’d fitted gave up! It never did, but I really wanted the refinements of the later common rail engine, as I thought it was time to make the change from mechanical pump to common rail.

“My old engine on dyno testing made 400 bhp with 825 lb-ft of torque. My new ISBE engine dyno’d in at 386 bhp with 825 lb-ft. There’s no smoke, no drama, just silky smooth power! With a few little tweaks I’m confident it too will make 400 bhp quite easily.” 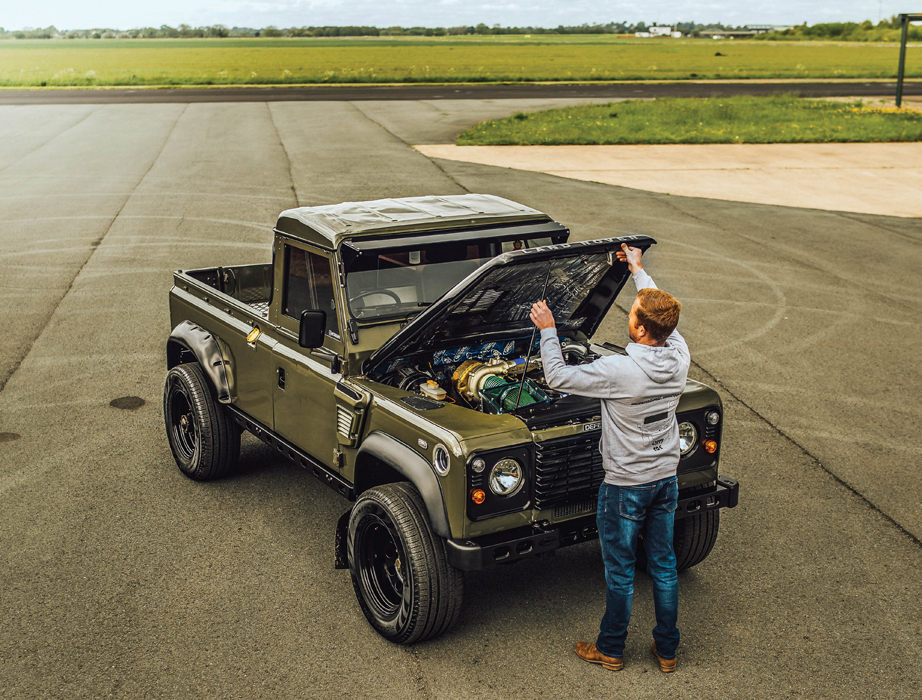 Tom says he has no idea what the top speed is, quipping: “It’s a Land Rover and I don’t want to die!” Nor has it been timed from a standing start, 0-60 mph, with Tom adding: “It’s not fast, due to shifting agricultural gears in the five-speed Dana Spicer T5X ’box, but it has enormous torque and in fourth gear will do 30 mph to 82 mph quickly and easily, with fifth gear still to go.” 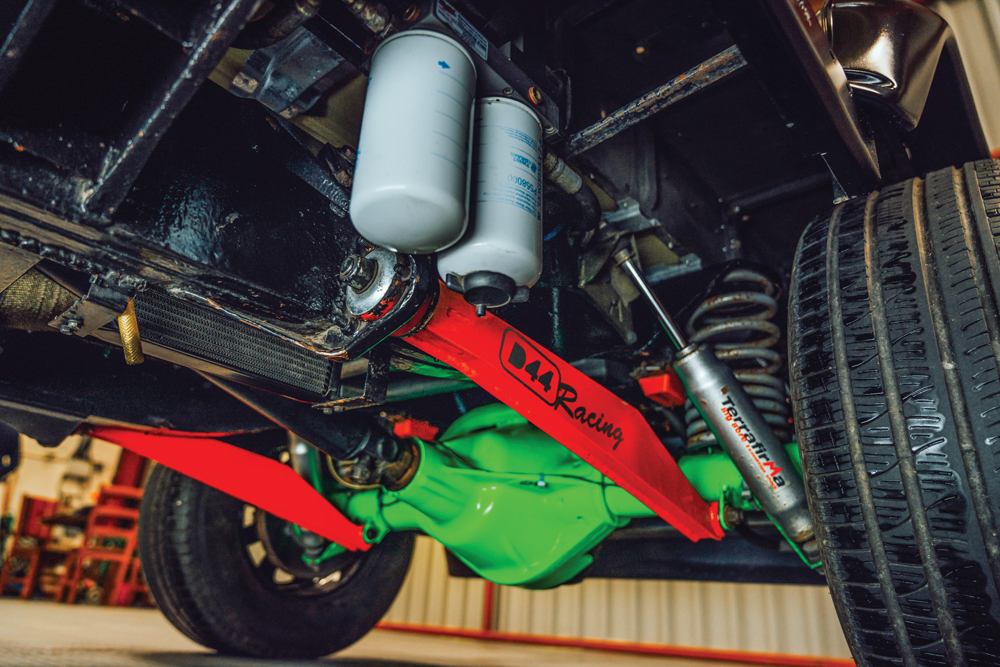 Tom’s truck sits nicely on its wheels, which include custom 10 stud rims at the rear to fit the huge, heavy-duty Dana80 axle, essential to handle the massive torque delivered by that big engine. The front wheels are 17 inch modular. Suspension-wise, Tom has settled for 90 HD springs on the front axle, with 2 inch lowering springs on the rear, to give it that distinctive stance. Even when stationary, this vehicle looks poised to take off. 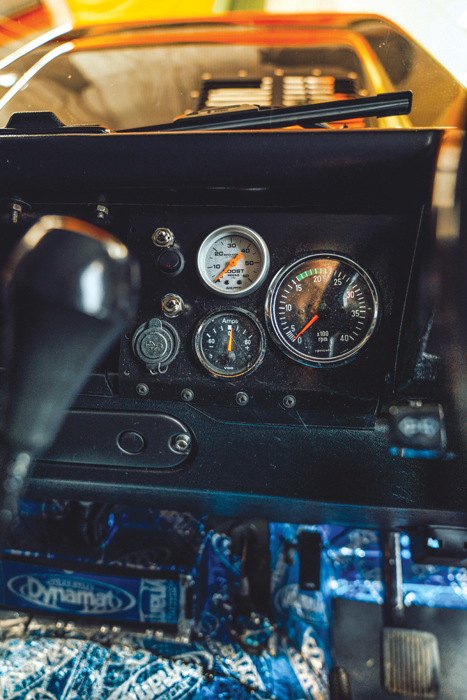 Inside the cab, modifications include a Td5 seatbox and XS-spec seats for creature comforts, plus acres of Dynamat Super Lite soundproofing to cut down the noise. Meanwhile, a Scangauge D vehicle monitoring system with its impressive array of dials provides instant real-time information on what’s happening under the bonnet. Features include 15 built-in digital gauges, five trip computers and a ScanTool that shows trouble codes. It’s the sort of sophisticated system normally found on top-end modern lorries. 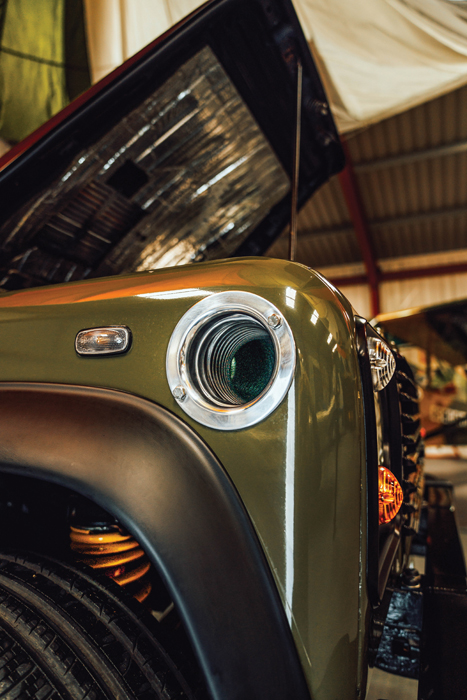 The big hole you can see on the driver’s side front wing is the massive intake for the air cooler. It’s got Wolf military-spec wing vents, too.

According to Tom, the toughest part of the project came three days after he’d had back surgery, when he decided to change the turbo. “I think with this sort of project it’s more of a mental game not to give up on the driveway,” he says. “The fabrication work I did was hard, but the little jobs I did like the Bowler extras were nice and easy to fit. Seeing the whole vehicle develop from wreck to what it is now was the most enjoyable part.

“Do I wish I’d done things differently? Well, I wish I’d gone for common rail in the first place: that’s a no-brainer. I should also have kept it with a van back so I could have slept in there. But no Land Rover project is ever finished and I may build a roof tent rack to fit in the pick-up bed and I have a few improvements to make in the cab. The list is endless.” 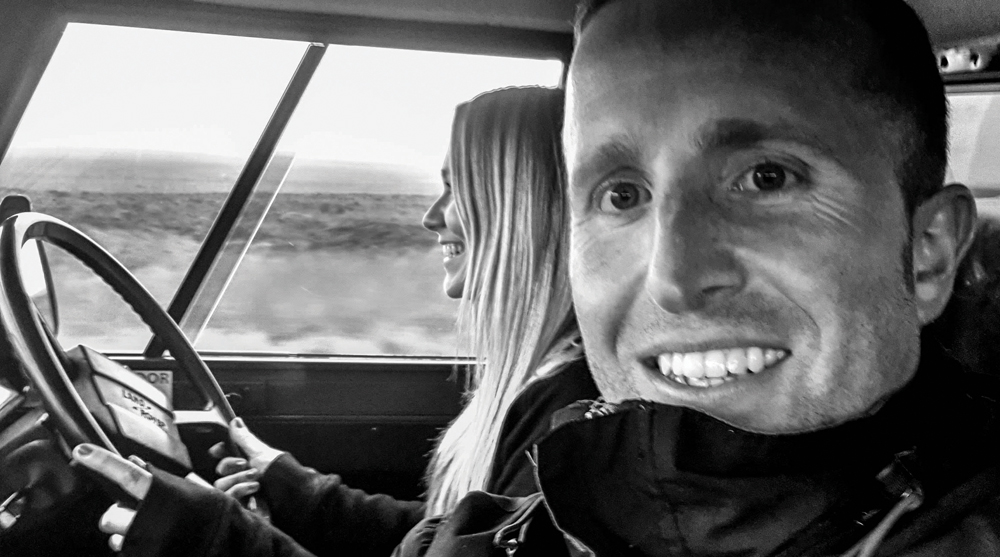 Best friend Simone gets a drive in Tom's amazing creation

Inspiration came in spadeloads from friends and family, including his best friend, Simone Weighell. “Her Td5 Defender 90, Larry, has had a huge impact on my project and I would probably have sold C510 if it wasn’t for her encouragement,” says Tom. “It was a total privilege to let her have a go in the driver’s seat of C510!”

He has also received massive support from followers on social media, where he and C510 have become Facebook megastars. “I have more than 45,000 followers on Facebook and one video I posted has had over 9.6 million views!” he says proudly. “C510 is known worldwide and is recognised everywhere I go. 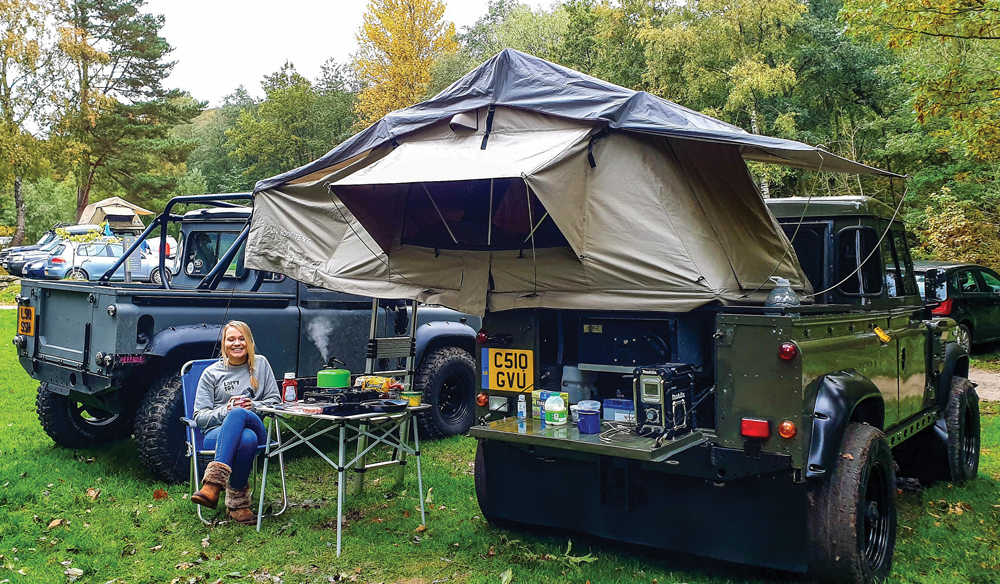 “It is not my daily driver. I take it out selectively – after all, it is C510 and I try to look after it! Having the Cummins engine means I take it not just to Land Rover shows but truck and agricultural events and car meets. People seem to love it and I enjoy going away camping and seeing new places! One day I’d like to do the North Coast 500 or drive it to the Nürburgring.

“I’ve taken it to several Land Rover shows, as well as trips to Darlington, Kirkbride, Skipton, Barmouth and Land’s End. Also Donnington and Oulton Park, just to name a few. 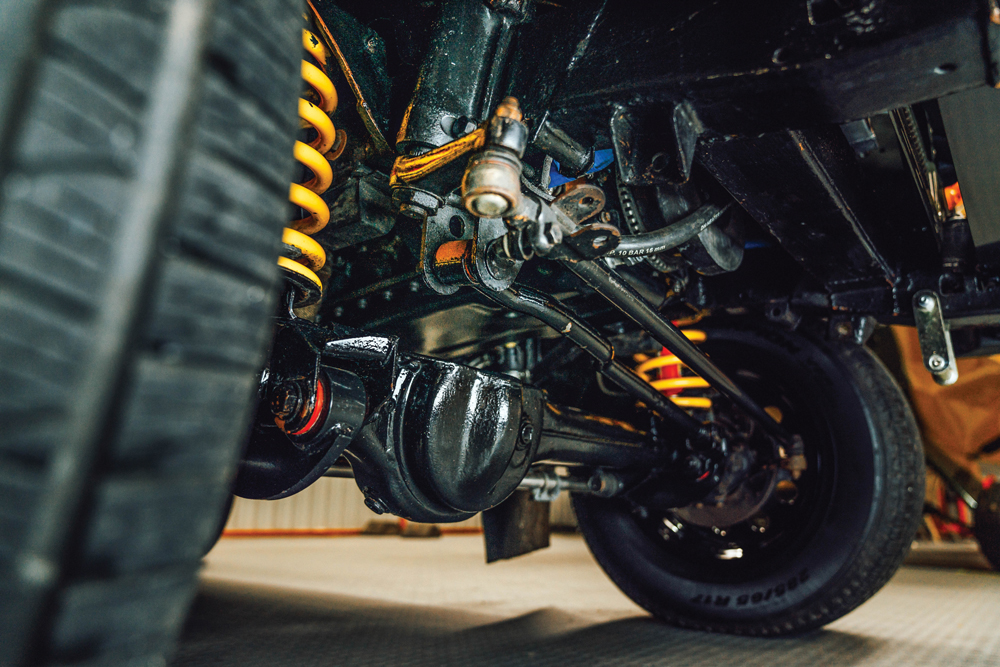 Show goers have plenty to drool over, including these uprated Sumo steering rods for off-road knocks and bumps

“I took it to the Cumbria Festival of Power, around 200 miles from home, and came second in the Light Commercial section. As I was packing my things away to go home, a gentleman walking past said: ‘Is this the one?’ My reply was: ‘Sure is, mate’.

“People say that all the time, but having someone say that makes my weekend. Standing beside C510 with a trophy in my hand means everything to me. Sometimes I like standing back at shows pretending to look at it myself, to watch other people’s reactions.

“But I would never want people to think C510 is about being better than their Land Rover or project. I respect them all, with an open mind, knowing that C510 has taken me over ten years to get it this way. I carry on doing bits when I mentally can, or can afford to. 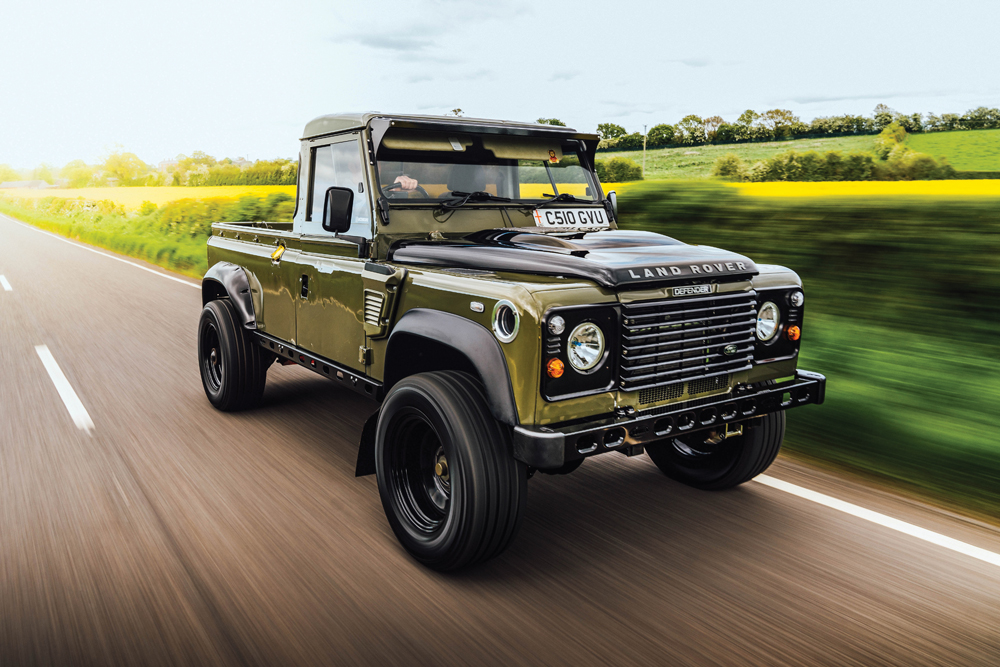 “My Facebook page following has always been a big inspiration. People’s nice comments and asking me for advice is what I really love doing.

“Don’t get me wrong: it attracts hate, too. I know it’s not everyone’s cup of tea and I get that we are all different – that’s what makes us human!

“But if, like me, you have that chassis looking sad for itself outside on the driveway, with bits of engine all over the place that was once C510, take heart – with a dream and a focus that it’s built not bought.

“Some people seem to think C510 is a fancy workshop build but I tell them this is a driveway-built truck because I love to inspire people or help them. If I can do this, anyone can – so never give up!

“I am a guy with learning disabilities. I’ve had people say I would never make anything of myself, but C510 is a reflection of myself and it’s much more than just a Land Rover. I’ve probably paid the price of lying on the driveway in the winter, out in the rain! But it’s part of my life and I wouldn’t change it.”

How to create a head-turner