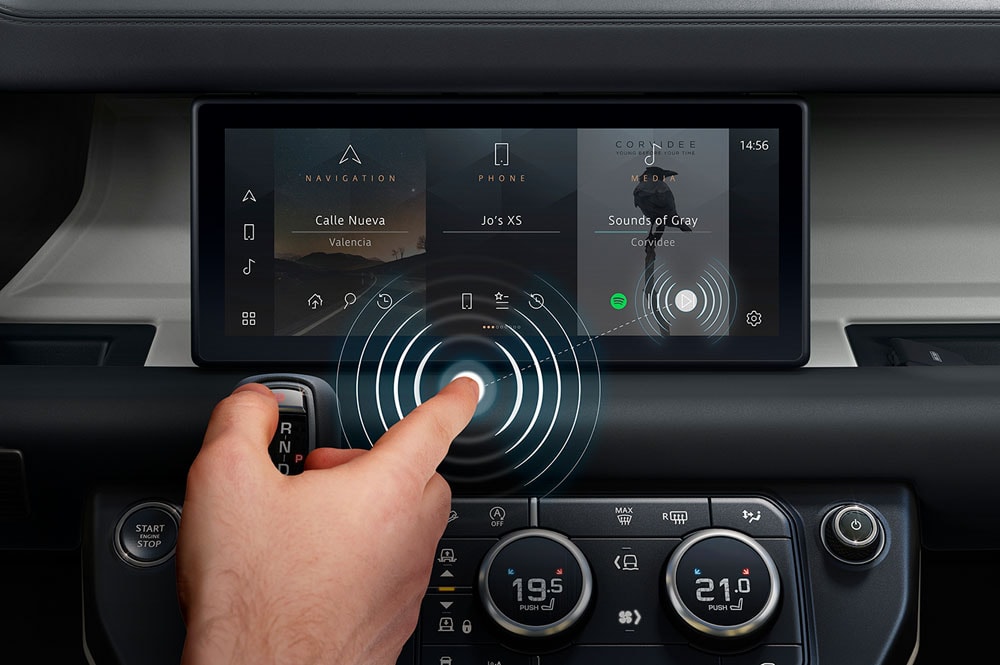 A contactless screen… Sounds like black magic, right? Wrong, those clever bods at JLR have used artificial intelligence and sensors as a way to control its infotainment systems without needing to touch the screen.

The patented technology, known as ‛predictive touch’, does what it says on the tin – it predicts a user’s intended target on the touchscreen – whether that’s satellite navigation, temperature controls or entertainment settings – without touching a button. How exactly? The tech uses AI to determine the item the user intends to select on the screen early in the pointing task, speeding up the interaction. A gesture tracker then uses vision-based or radio frequency-based sensors, which are increasingly common in consumer electronics, to combine contextual information such as user profile, interface design and environmental conditions with data available from other sensors, such as an eye-gaze tracker, to infer the user’s intent in real time.

The pioneering system, developed with engineers at the University of Cambridge, is part of JLR’s Destination Zero vision – a desire to make its vehicles safer and the environment cleaner and healthier.

Once ‘normal’ (whatever that will be) life resumes, there will be a greater emphasis on safe, clean mobility and this system is a step forward in automotive personal space and hygiene by limiting the spread of bacteria and viruses. Furthermore, lab-tests and on-road trials showed the predictive touch technology could reduce a driver’s touchscreen interaction effort and time by up to 50 per cent, reducing the risk of an accident as the driver doesn’t have to take his or her attention away from the road as much.

This software-based solution for contactless interactions has reached high technology readiness levels and can be seamlessly integrated into existing touchscreens and interactive displays, so long as the correct sensory data is available to support the machine learning algorithm.