Is a leaf-sprung Lightweight the perfect antidote to over-complicated modern motoring? Here’s a cracking warhorse that might just fit the bill…

Beauty is in the eye of the beholder, so they say, and if your idea of the ideal Land Rover is a workhorse stripped back to its bare necessities, then an ex-military Lightweight could be the perfect match for you – and none could be more beautiful than this stunning example from vehicle restorer extraordinaire, Terry Hayward.

In an age when all vehicles, Land Rovers included, are getting too complicated, and styled to within an inch of their lives, the leaf-sprung Lightweight is the perfect antidote. More warhorse than workhorse, it was created for the British military to be slung under a helicopter and dropped on the frontline. To make it as light as possible for its airborne role, every unnecessary frill was stripped out. The end result was the “truck, ½ ton, GS, 4x4, Rover 1, FV18101” as the army named it, so eloquently. But any vehicle with a name that takes longer to say than its 0-60mph time is never likely to catch on, so it became (in common parlance) the Lightweight. 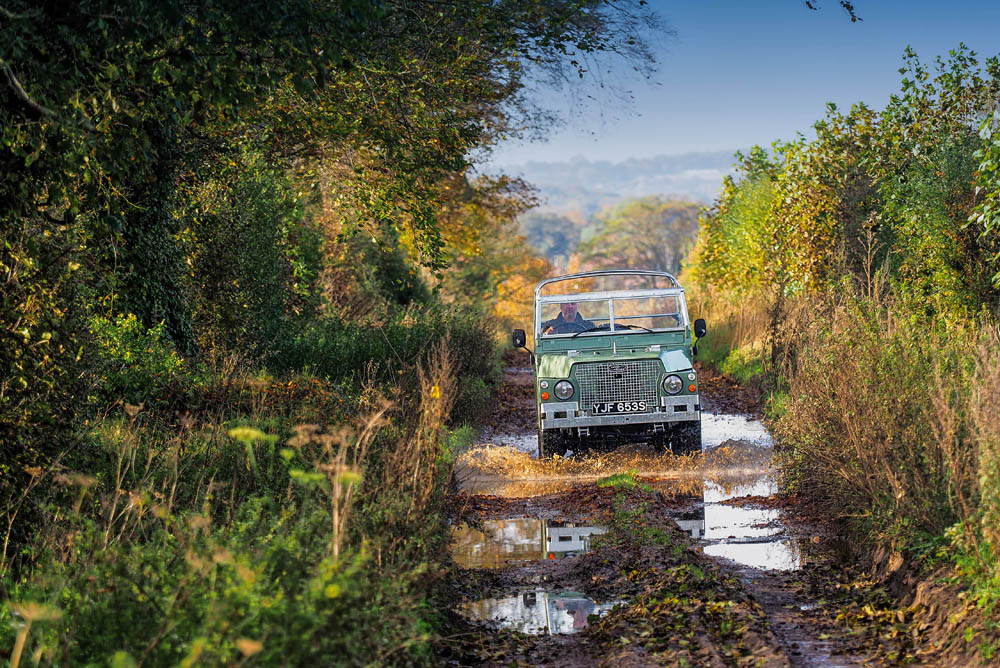 The Lightweight is a vehicle that has achieved a remarkable renaissance among enthusiasts. Back in the late 1990s, when the last of them were sold off by the MoD for new lives in civvy street, you could pick up a battle-scarred veteran for less than £1000. This was at a time when a 4.6 P38 Range Rover would set you back over £50,000. Today, that P38 will most likely be scrapped, or worth a pittance, while the Lightweight in decent condition would most likely fetch £6000. That is some reversal of fortunes, but it is also an indication of which way the wind’s blowing in classic car circles. 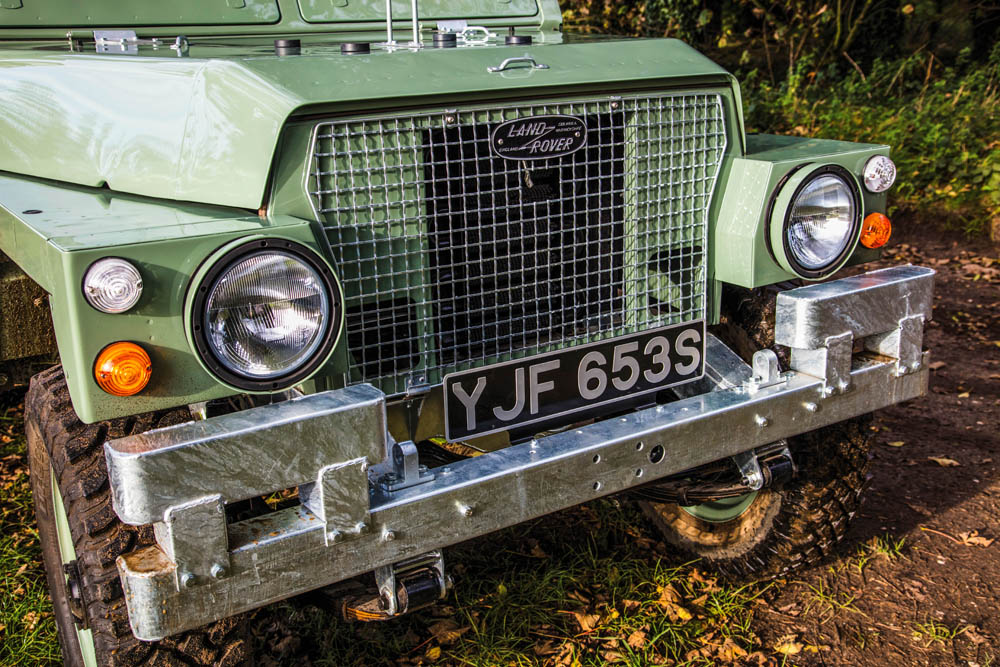 No mistaking the Lightweight's distinctive face

Collectors are, of course, responsible for the remarkable hike in values of old Land Rovers, but that’s no bad thing. At least they are coveted and being preserved, rather than left to rot in the corner of a field or scrapyard. Besides, they are not all destined to be polished within an inch of their lives. The one on these pages has been owned and driven by the same Norfolk enthusiast for several years – and will continue to be enjoyed by that same owner for many more years yet, thanks to Terry’s efforts.“It’s a local vehicle,” says Terry. “It has had the same owner for several years, who drove it for pleasure and enjoyed it, but it was eventually rotten and falling to bits. He asked me to refurbish it to a nice, reusable state. Typically, I’ve probably gone a bit too far, but my excuse is that I’m a perfectionist. I can’t do half a job…” 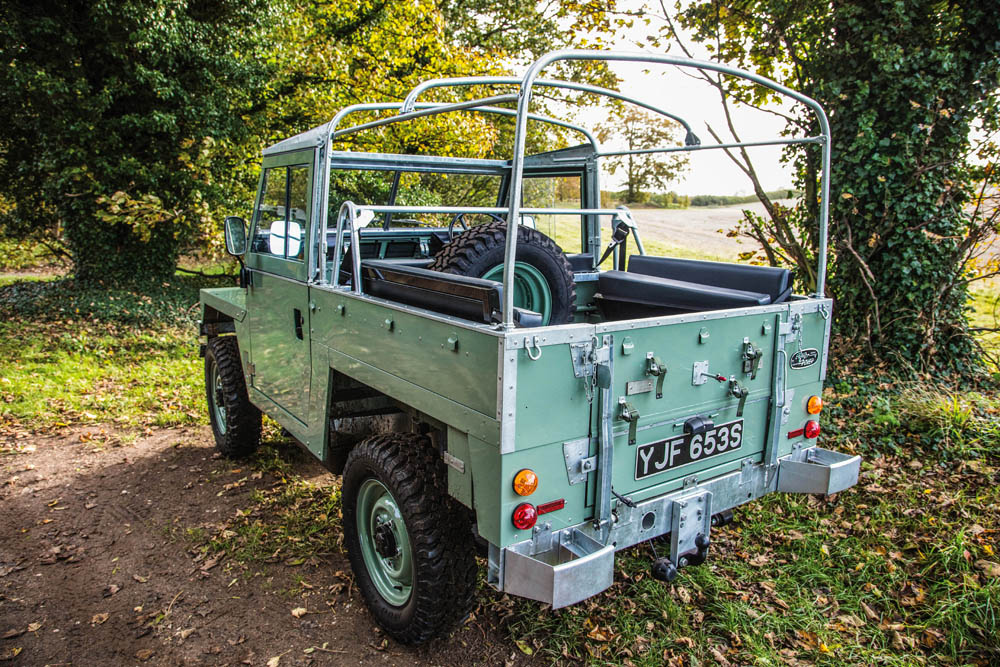 Indeed he can’t. Terry, who runs the aptly-named Hayward Revive company from Fakenham, Norfolk, specialises in breathing new life into tired old Land Rovers. In the case of this 1978 Series III Lightweight, it is leaving his workshop in a much finer condition than it would have Lode Lane, Solihull, 42 years ago. It is better than new.

Terry remembers the day in 2019 that he began work on the restoration: “It was obvious straight away that the original chassis was in a bad way. As I stripped down the vehicle it looked even worse. It was rusted through in several places and was much too rotten to contemplate repairing, so I ordered a new, galvanised one from Richards Chassis. 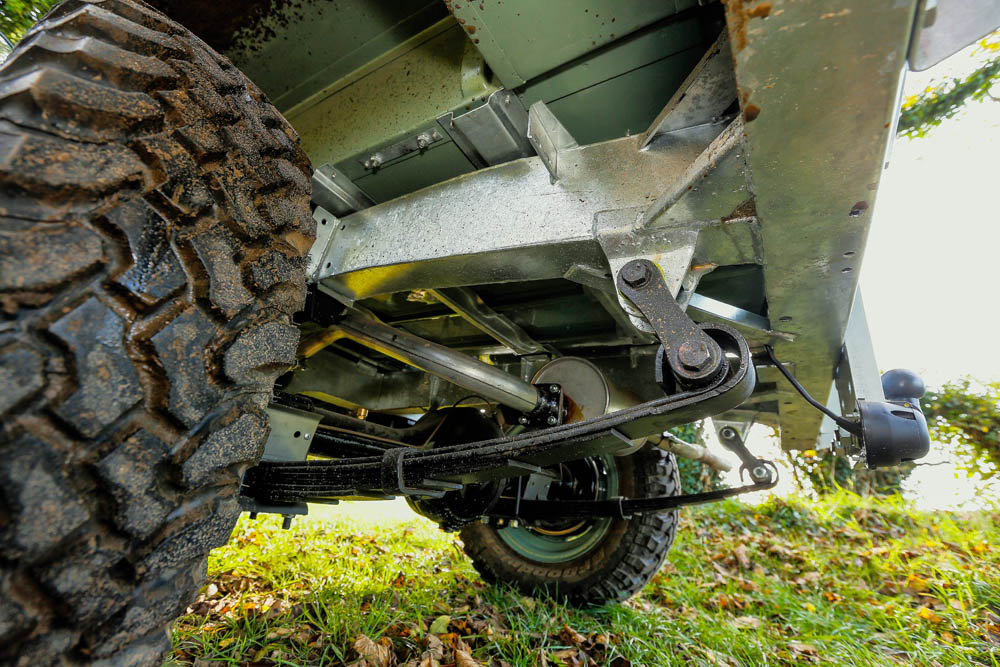 “I took all the panels off, one by one, stripped them all to bare alloy and painstakingly repaired and repainted them. The steel bulkhead was rusty, but repairable with a little cutting out of the worst bits and welding in new metal, so I restored it. I like to preserve as much as possible of the original vehicle. I examined every single part as I dismantled the vehicle and re-used anything that was still fit for purpose. 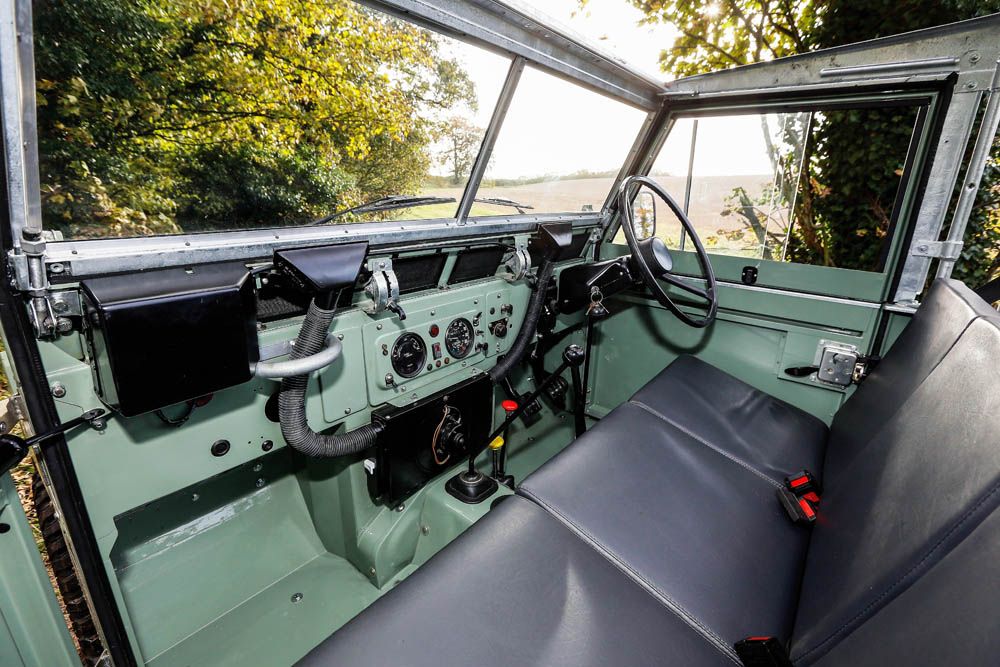 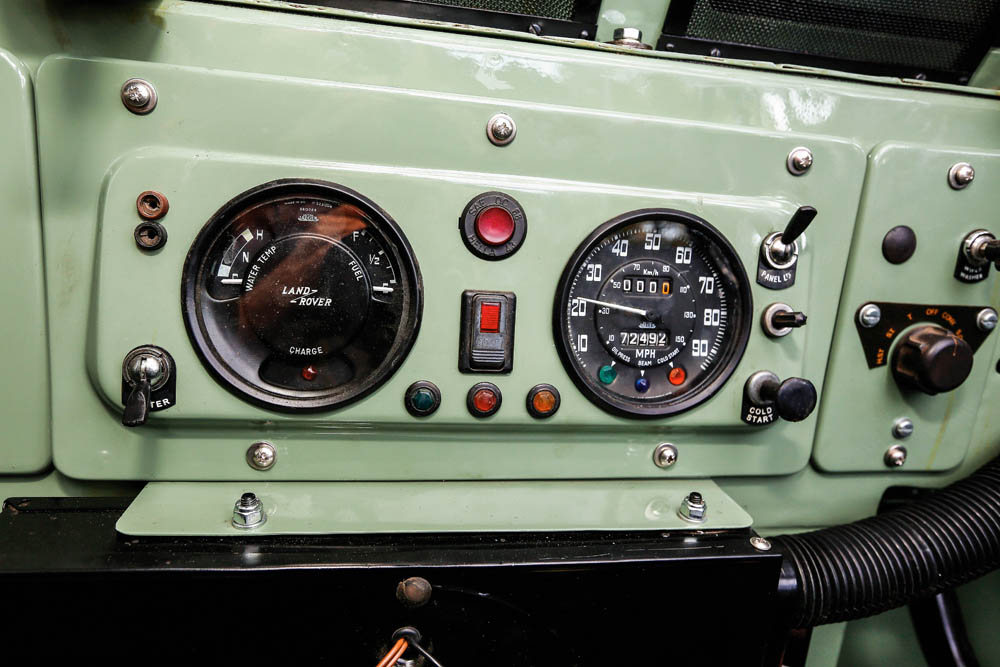 “Electrics can sometimes be a nightmare on old vehicles, but not this one. The original loom was still in place: I thoroughly tested it and it was fine. But the seats – three in the front and two bench seats in the rear – were shot and so I replaced them.

“The tyres were nearly new and good for many more miles yet, but I removed them from the wheels to have them shotblasted back to bare steel and repainted, then refitted the tyres.” 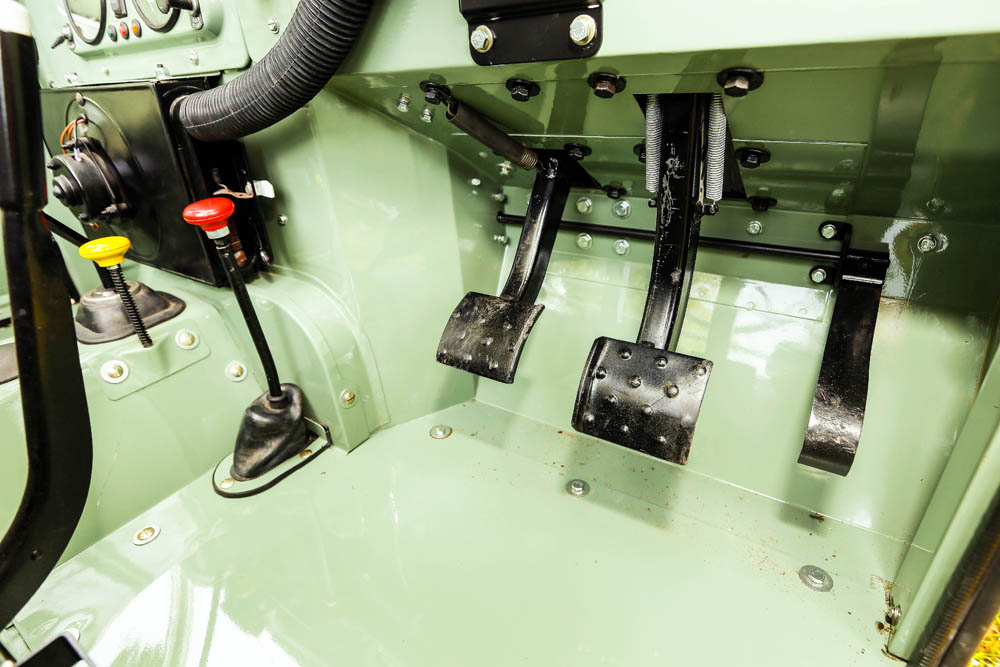 This has to be the shiniest Lightweight footwell in the world

Putting the beast back together again was a bit of a nightmare. “The panels on a Lightweight are very thin and flimsy; they were designed that way to keep weight down, but that means they are really hard to line up. I got there in the end, though. I decided to reinforce the rear panels so they didn’t split in the future.”

I suspect that Terry’s concern about panel gaps is somewhat greater than anyone at Land Rover in the 1970s, because the fit he achieved is as good if not better than practically every Series Land Rover I’ve ever seen.

The leaf springs were cleaned up and re-used and a new exhaust fitted. The cockpit, meanwhile, is all standard. The bare metal dash with its simple instrument gauges is original, although Terry did service them and clean up the dials. There’s no radio, nor creature comforts: not even rubber mats on the floor. No power steering, either, and the owner has thankfully resisted the temptation to swap the original steering wheel for a Momo replacement. And talking of steering, there’s no power steering on this beast. Driving a standard military-issue Lightweight puts the austere into austerity, all right. 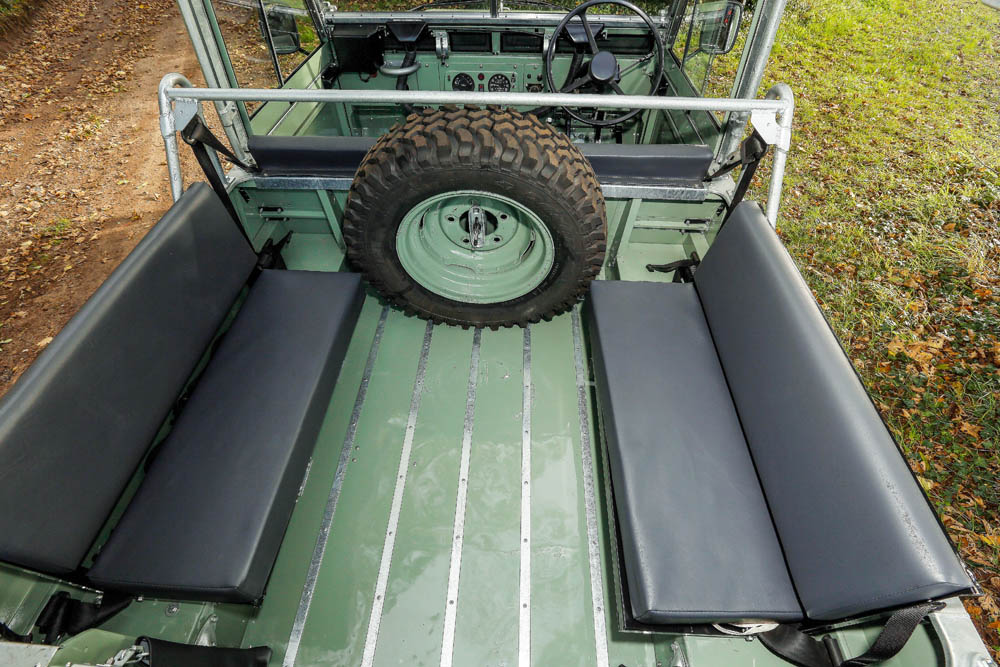 Spare wheel moved from bonnet to behind the front seats

According to Terry, who stripped the paint off the panels, the original finish was standard Land Rover Bronze Green, “with three or four layers of brush-applied Nato green camouflage over the top”. But the owner prefers the light green shade of very early 80in Series Is, so Terry sourced the modern equivalent and treated the whole vehicle to probably the best paint job ever seen on a Lightweight. It really is stunning.

The only other change from standard was the placement of the spare wheel. On a Lightweight it is usually fixed atop the bonnet, which doesn’t exactly aid visibility for the driver, particularly those that are slightly vertically-challenged. To solve that problem, Terry built a custom bracket to stow the spare behind the front row of seats. Very neat it looks, too.

“Hours and hours of detailing followed,” says Terry. But he was thrilled with the end result. I met him when he took it for a test drive along the local lanes and I have to agree. It is stunning.

“It was a six months project if I had done nothing else, but the owner wasn’t in a hurry so it took a year and half, fitted in between other jobs. It was a real labour of love,” he says, with a smile. And I’m sure the owner’s smile was even bigger when he picked it up a couple of days later.

Lightweight: the failure that became a success story… 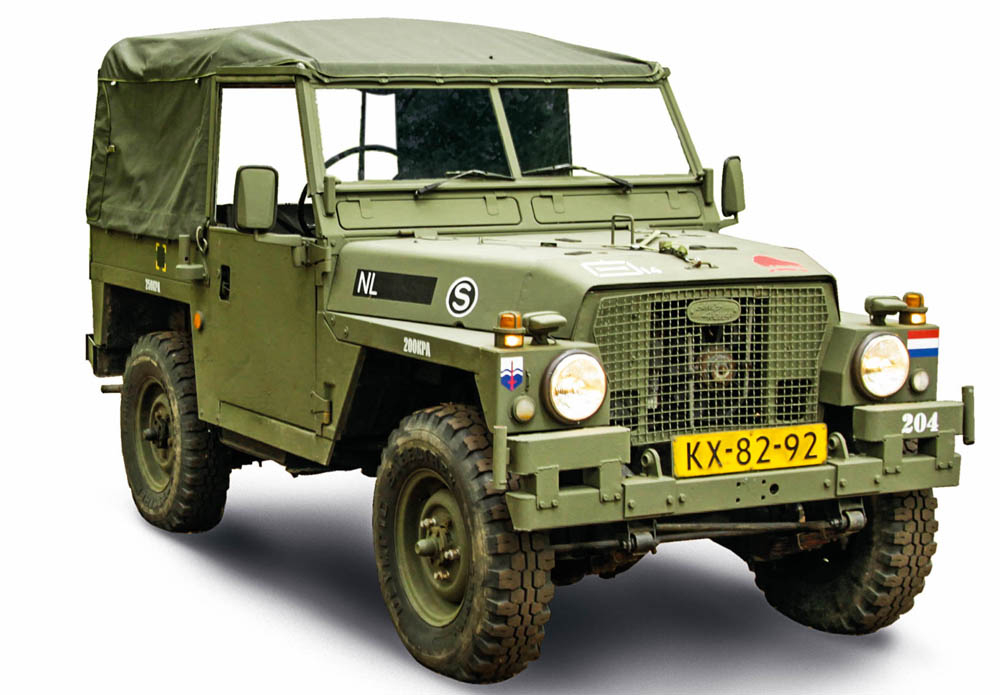 THE story of the Lightweight is one that begins with failure. In the early 1960s, the British military – particularly the Royal Marines – required a vehicle that could be carried by air to replace its ageing fleet of Austin Champs. It needed to be slung under the military’s Westland Wessex helicopters, which could carry a maximum load of 2500 lb (1134 kg).

Solihull took up the challenge. The lightest Land Rover available at the time was the Series IIA 88 inch short wheelbase, which at 2906 lb (1318 kg) was too heavy, so in 1965 work began on creating a lightweight version. This was done by stripping out all nonessential panels and components and making the vehicle four inches narrower than a standard Series IIA. This was done by building shorter axles and half shafts and meant it would fit on a standard pallet. The overall width of 60 inches also meant that two Lightweights could be fitted side by side within the military’s Argosy cargo planes.

Despite these drastic measures, the new vehicle came in over the weight specified by the Ministry of Defence. At 2650 lb (1202 kg) it was still 150 lb too heavy. The addition of reinforcement struts to strengthen the vehicle for military use had put it over the limit. Despite Land Rover’s finest engineers’ best efforts, it had failed to make the grade.

Happily, the MoD accepted the new vehicle anyway, because the Lightweight’s upper panels, doors, tilt and windscreen could all be easily removed (and refitted later), which made it light enough for transportation by helicopters, which were already being improved and had a higher carrying capacity. Most of the Lightweights (also known as the Half-Ton or Airportable) would be transported by cargo aircraft or
rail, anyway.

The first production models were completed on November 11, 1968, and production continued until 1984. About 2000 of the Series IIA Lightweight were produced before it was replaced by the Series III Lightweight in 1972, a few months after the introduction of the civilian Series IIA. The new SIII Lightweight had little to distinguish it from its SIIA predecessor. Unlike the civvy-street Series III, there was no plastic front grille to instantly identify the newcomer (and shock the purists!), but if you crawled underneath you’d spot detail differences to the chassis and, under the bonnet, an alternator had replaced the earlier dynamo. Climb into the driver’s seat and you’d notice a new indicator switch incorporating a headlamp flasher and horn, while the ignition switch was now fitted in the new steering column cowl instead of on the dashboard (which remained metal, by the way). The driver would also have appreciated synchromesh on second gear.

The 2.25-litre four-cylinder petrol and diesel engines remained the same as the Series IIA’s but in 1980 were upgraded from three to five main bearings, for smoother running and better longevity. 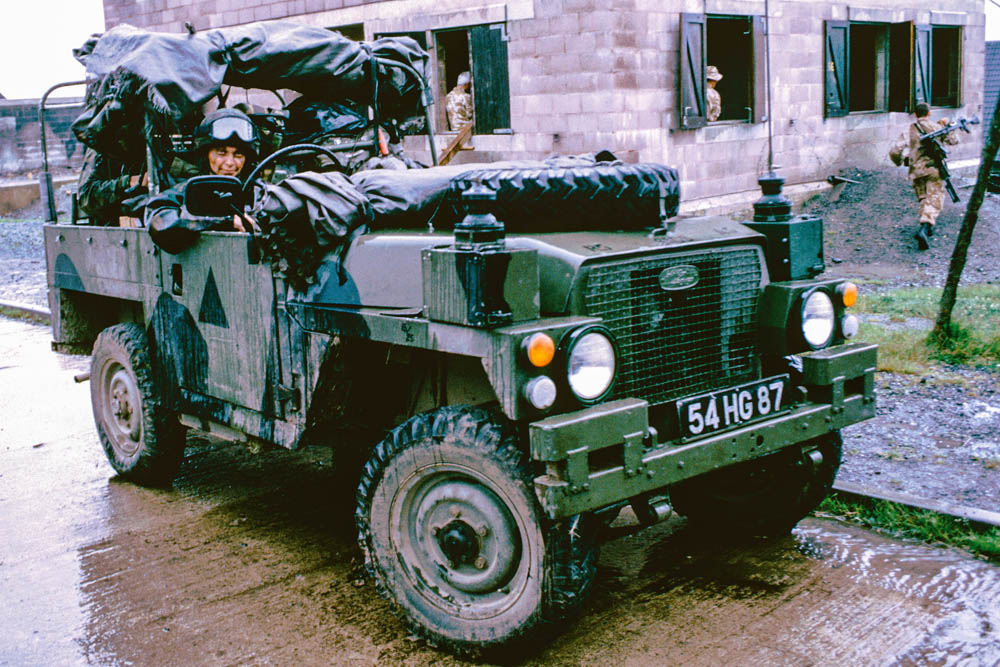 The last of the British Army SIII Lightweights, on exercise with 4 PARA in Wales in 1997

By the time Lightweight production ended in 1984, a total of almost 38,000 Lightweights had been built, serving in the armed forces of more than 20 countries. What had initially been a failure became a massive worldwide success story. For the British military they were a common sight at trouble spots throughout the world from Port Stanley in the Falklands to the troubled streets of Belfast.

They were replaced by military versions of the Ninety and One Ten models. By then a trickle of older vehicles were already being demobbed and snapped up by enthusiasts – a trickle that turned to a flood in the 1990s, when a Lightweight was seen as a cheap and cheerful entry vehicle for Land Rover ownership that could often be picked up for hundreds of pounds.

Since then, the world has moved on and Lightweights are now in demand with collectors and usually worth more than their civilian equivalents. If the thought of no-frills classic motoring appeals, a Series III Lightweight is the ideal vehicle. But they don’t come cheap any more.