Some folk don’t like old Series Land Rovers: they say they’re too slow and smoky. But not Frank Rothwell, who made his much slower and smokier by fitting a steam engine in his Series IIA.

Frank bought a 1967 88in SIIA for £4500, then removed the original 2.25 petrol engine and gearbox and replaced them with a half-size scale replica of the steam engine that drove the Foden steam wagon a century ago. He then spent over 1000 hours installing the kit.

At the age of 67, when many men his age are reaching for the pipe and slippers, Frank is very different. He runs a large company building and hiring portable buildings and employing 40 staff. Not bad for a man who left school at 14 to work on a farm as a tractor mechanic. Then came the 1960s and the boom in motorway construction and he switched jobs to become a bulldozer mechanic, followed by a stint as an engineer in Zambia.

“I’ve owned and run Land Rovers all my adult life,” he says. “When I was on the motorways and in Africa, I literally lived in them.”

But why the steam-powered version? 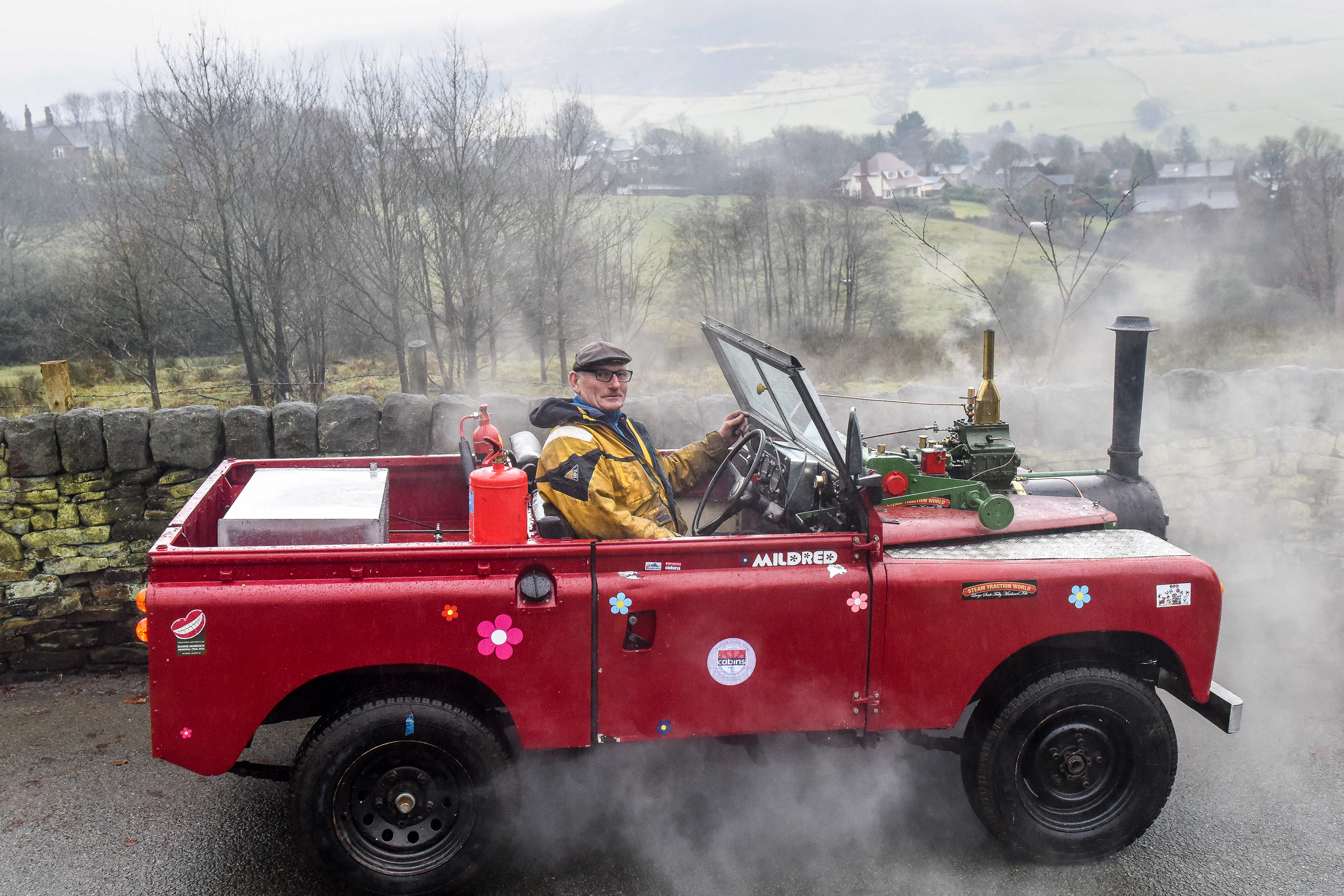 “I did it because I fancied a challenge,” explains Frank. “I wanted to create a modern steam-powered vehicle and the Land Rover was ideal, because the technology is so basic.”

But it wasn’t simply a case of lifting out the old engine and gearbox and dropping in the steam-powered unit. First, Frank had to make sure the chassis rails and crossmembers could carry the weight of the new engine and, if necessary, beef up the suspension. And there was also the little matter of whether the steam engine would fit. To make sure, Frank built a full-size wooden model of the steam engine.

Like a conventional steam engine, found on railway locomotives and traction engines, Frank’s Land Rover has the smokebox and funnel at the front, with the boiler in the middle and the firebox behind that, sitting where the bulkhead would normally be.

The firebox is where the coal is shovelled in to make the heat that boils the water and creates the steam pressure, which drives the two cylinders via the rear axle. The front axle is freewheeling. “It is no longer four-wheel drive because working out how to deliver the power to both axles was too complicated for me,” admits Frank.

Frank has replaced the middle front seat with what he calls “the tender” – the storage area for coal which he shovels into the firebox to keep the fire burning hot. In the back is a 150-litre plastic container with water to top up the boiler.

The steam engine is pretty basic technology, but don’t knock it – it’s what the British Empire was built on and was what made Victorian Britain the most powerful nation in
the world.

Frank from Oldham, Greater Manchester, says: “We all need a hobby and I like doing things that are difficult. I’d already built a 1910 steam wagon and got a real kick out of that so just thought what else can I do? I wanted it to be something unique and recognisable and something that no one had ever done before.

“In the back of my mind I knew it could be done because of my skills, it was a case of having the money and obviously the time to do it.” 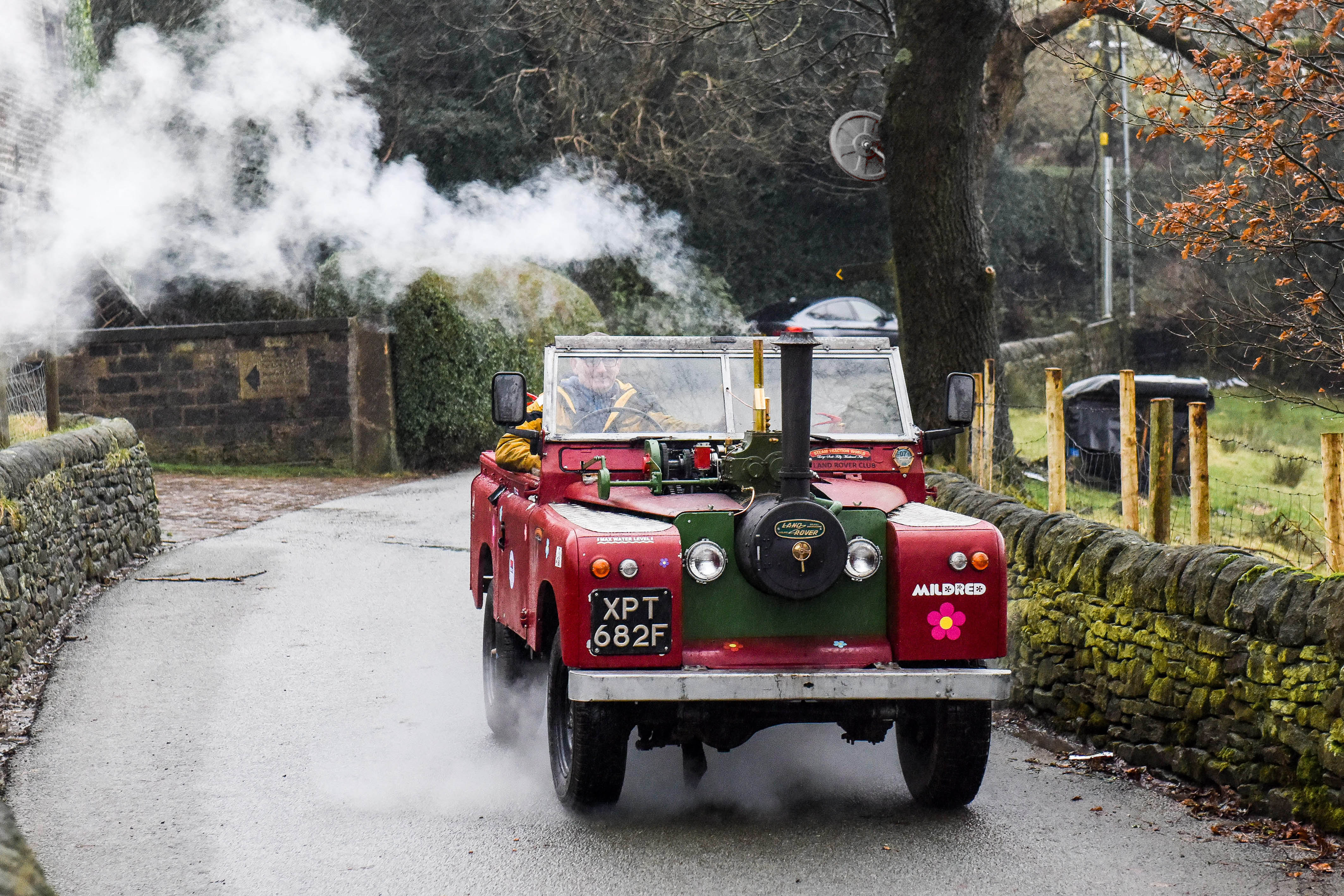 My grandchildren love it; they find it so exciting to ride on and chug along

The quirky 51-year-old motor coincides with another special occasion in his life – as it also marks the year Frank and his wife started dating.

“My wife Judith thinks I’m crazy and hasn’t even had a ride in it yet, but at least it keeps me out of the pub,” laughs Frank. “My three grandchildren however absolutely love it; they find it so exciting to have a ride on it and chug along. I think it’s really good for children of this era to do things like lighting fires and using coal because they have little access to using things like that these days.”

In case you’re wondering, the top speed of Frank’s creation is 15 mph. It has three gears, depending on whether you’re going uphill, downhill or cruising on the level. But you can’t change gear on the move; you have to pull up to do that.

Fuel consumption is a quarter of a hundredweight (33 lb) of coal per two hours of motoring. Happily, steam engines are not subject to emissions restrictions.

The Land Rover has its original drum brakes but Frank has replaced the handbrake drum with a Britpart disc conversion – probably his only concession to modernity.

Franks admits he has spent about £24,000 building his steam Land Rover, but that has not deterred him from thinking big about his next project. “I’d like to do the same again, but in a Land Rover in mint condition, so that it would be up to concours standard for shows. While this one was sound and had passed its MoT without any problems the original owners nicknamed it Mildred because of all the mildew. Put simply, it was in a terrible state and had been used and abused as an off-road trialler.”

But that’s for the future. Right now Frank is making final refinements to his remarkable vehicle so that he can exhibit it at the various steam and automotive shows over the coming summer. He says: “I have made a special plea to Chris Evans and his North West Car Fest event – I would love to bring my Land Rover along so people finally get to see what a proper motor looks like.”

Who knows? He might even be heading full steam ahead to one of the Land Rover shows this year. Watch this space.