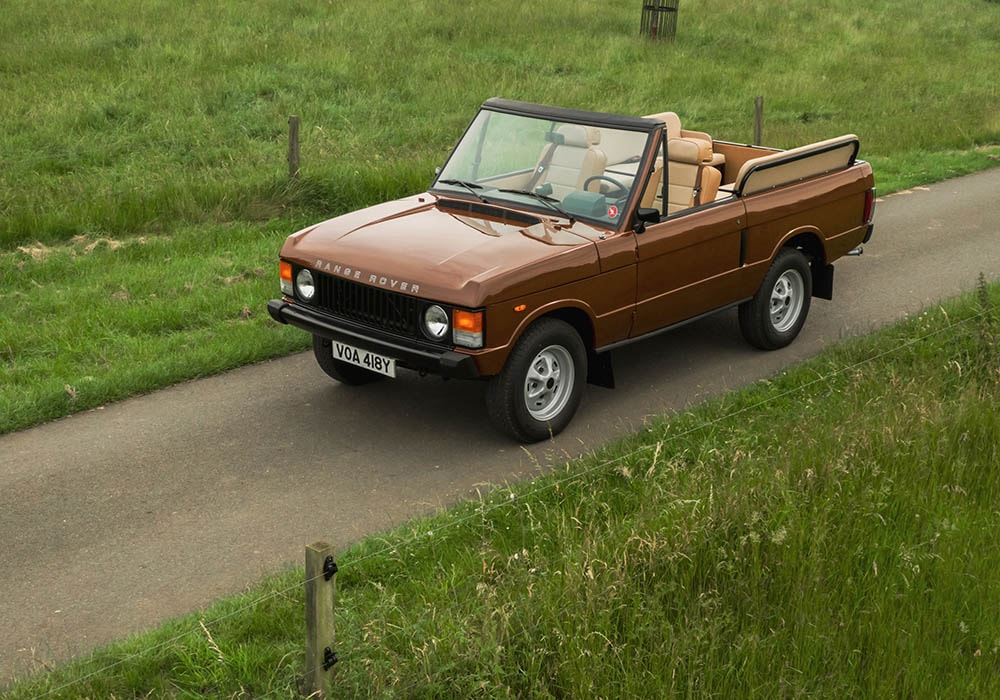 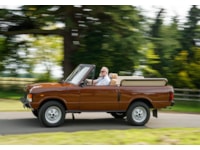 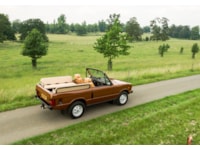 If you were a Range Rover fan in the 1980s it’s likely you’ll remember the opening sequence of James Bond’s Octopussy for one main reason... Nick Dimbleby reports

Picture the scene: the world’s most famous secret agent is on his latest mission. Disguised as Colonel Luis Toro using little more than a dodgy moustache, a reversible suit and those famous eyebrows, Roger Moore has infiltrated what appears to be a Latin American airbase in order to plant a bomb. Unfortunately, having just planted said bomb, his cover is blown and he comes face to face with the real Colonel Toro. He is bundled into a military truck to face his fate.

Enter our sultry hero Bianca (played by Tina Hudson), at the wheel of a rather special Range Rover: a fully open-top convertible with side-facing rear bench seats and large front bull bar, that connoisseurs will identify as a Rapport Huntsman. As Bianca pulls alongside the truck, Bond’s captors are presumably distracted by the immaculate teddy bear trim and the non-standard finisher on the windscreen, and, as their eyes are elsewhere, Bond pulls the ripcords on their parachutes with the inevitable result. 007 jumps on board the Range Rover (thank goodness for the open-top!) and makes his escape.

It’s not over yet however, as – bizarrely – the airbase seems to be hosting some kind of military equestrian event, and as part of the cover, the Range Rover is towing a horsebox with a horse’s tail hanging over the back. As the vehicle is moving, Bond gets into the horsebox and unhooks the trailer (that handy open-top again), and as the trailer comes to a stop, Bianca drives off into the distance with a toot and a wave. Cue to a close-up on the horse’s rear end that electronically lifts up to reveal the Bede BD5 micro-jet that Bond uses to make his escape in a sequence of close scrapes and explosions. You couldn’t make it up…

When you watch that opening sequence from 37 years ago, it’s hard to imagine any other vehicle fitting the bill. The filming of this classic Bond pre-title sequence took place at a disused airbase in Oxfordshire in the early 1980s, with additional footage filmed at RAF Northolt in Middlesex. Despite looking like Latin America, the whole sequence was shot no further south from Pinewood than Oxfordshire.

With such a local shoot, it’s fair to assume that the open-top Range Rover/Rapport Huntsman was supplied to the film production company by Rapport itself for a bit of publicity. Rapport was a reasonably well-established conversion company with a showroom in Mayfair at the time, and it sold a fair number of Range Rover conversions back in the late 1970s and early 1980s. The Russet Brown vehicle in the film was probably a demonstrator or maybe even a customer vehicle that was lent to the film crew before going to its owner. It’s amazing that it’s survived to be featured on these pages well nearly 40 years later… or, er, has it?

In fact, no-one knows where the Range Rover in the film ended up (unless someone reading this knows otherwise of course), but what I can tell you is that it is definitely not the two-door open-top Range Rover that you see here – even though you might think otherwise. The vehicle on these pages is a faithful recreation, made using stills from the film as a guide and – amazingly – a 1:43rd scale model made by the Italian model makers Edicola. It’s identical to the vehicle in the film apart from slightly less angled seat frames, the seat material itself and the lack of a front bull bar. The seat material was changed to more weatherproof canvas to suit the British climate, whilst fitting a bull bar was deemed a little too 1980s for this day and age.

The replica vehicle is the brainchild of Chris Bishop of Bishop’s Heritage, who – like most other car-mad kids in 1983 – had the small Corgi model of the Rapport Huntsman that was made to support the film. That Corgi model survived into adulthood and sat on his desk, until 30 years on Chris decided to scratch an itch and turn childhood dream into reality. After all, it’s said that the difference between men and boys is the size of their toys.

Starting with a low-mileage, period-correct 1982 left-hand drive VIN AA two-door Range Rover that Chris had sourced from France, the vehicle was brought back to Bishop’s Peterborough workshops and – as would have happened with the original Rapport Huntsman conversion – was unceremoniously taken apart. Whereas Rapport would have used a factory fresh two-door Range Rover, the only option nowadays is a previously-owned example that – after 37 years – inevitably had a small bit of rust here and there. The rust was cut out, repaired and replaced, and then the team got the tin snips out to start work on the roof.

The Rapport Huntsman is quite a straightforward conversion, as it is more or less a two-door Range Rover with its roof removed. Of course, the cuts on top of the windscreen and the upper body have to be made good, and here, Bishop’s Heritage made a bespoke metal cover for the upper body and a soft-touch vinyl topper for the windscreen – both manufactured to look similar to the original conversion by using the film footage as a guide.

The rear bench seats, likewise, were constructed using the film for reference, although Chris decided to make the angle of the back more raked than the original and have padding on the side armrest, simply because it was more comfortable that way. There are also six lap belts (three each side) for safety’s sake. Bond wouldn’t be interested in these whilst leaping from truck to Range Rover, but today’s modern safety standards dictate that they should be there. 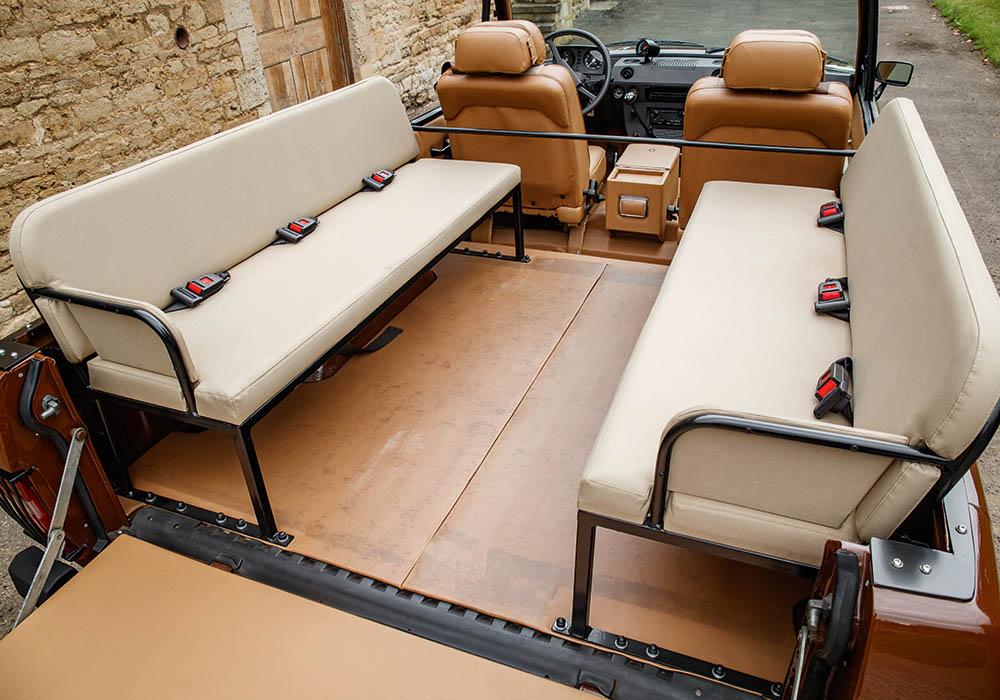 Lap belts were fitted to the custom-made rear bench seats, allowing seating for eight including the driver. 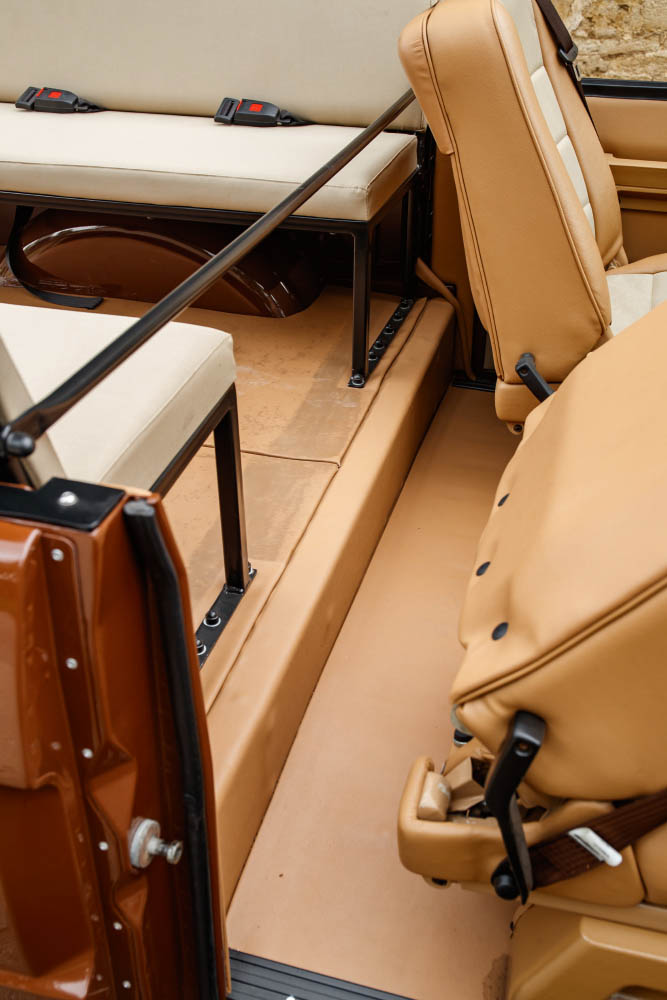 Original Rapport Huntsman conversions often had a spare wheel installed here, but to retain a comfortable driving position, this was deleted for the recreation.

As for the interior, the Bishop’s Heritage Range Rover is a proper open-top, in the sense that there is no roof. At all. This makes things a little more interesting for those of us who live in a temperate climate, and to counter this, Chris commissioned Nationwide Trim to re-trim the seats in Ripstock canvas rather than the standard teddy bear trim as per the original. This makes things a little more weatherproof than standard, although any lengthy amount of time in the rain is to be avoided for the comfort of the occupants apart from anything else. 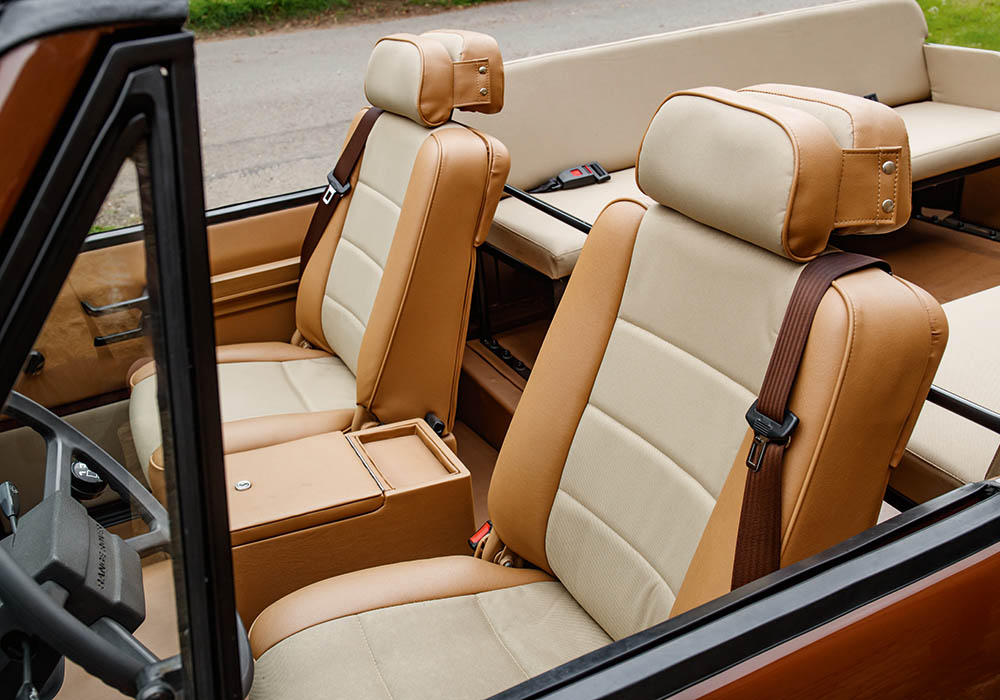 To counter the lack of roof and offer some kind of weather resistance, the front seats are trimmed in same fabric as the rear: Ripstock canvas. 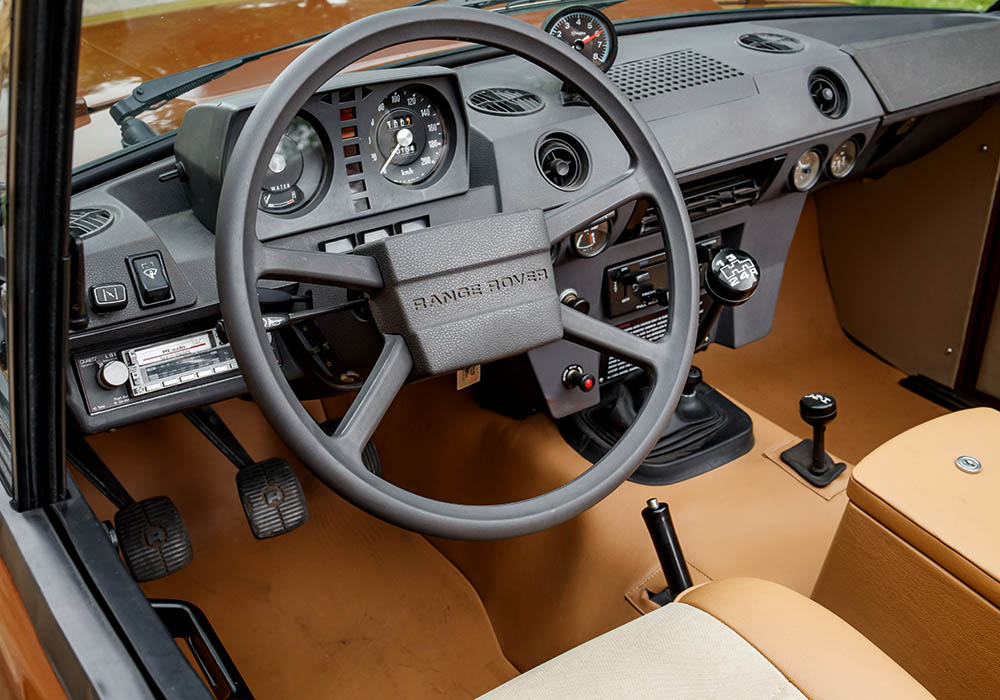 The original Range Rover on which this conversion was based was a low-mileage example from France, complete with rev counter and PYE cassette/radio. 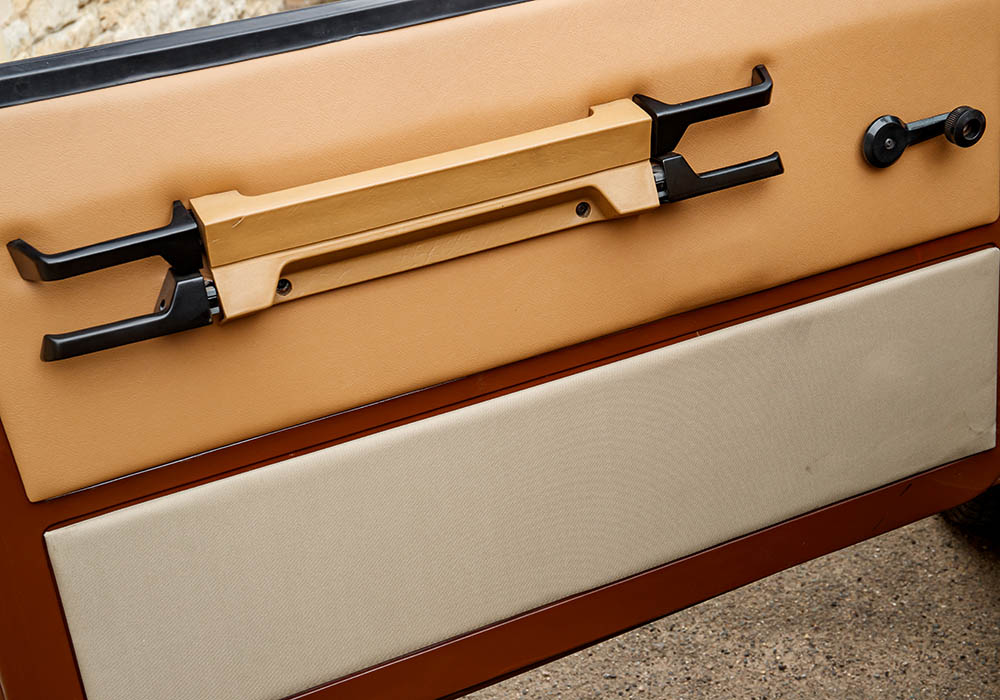 The open top means that the drive is like nothing I’ve experienced before in a Range Rover.  Although it clearly is quite breezy on the move, on the warm day of the photoshoot it really was quite a pleasant place to be. There’s no excessive wind noise and there aren’t any niggling draughts that might otherwise have you cursing the lack of a roof.

Clearly, having no roof or, indeed, any type of upper body structure, means that the chassis is taking the strain when it comes to twist and yaw, and this means that there’s a bit of scuttle-shake when you hit a pothole or drain on the road. It’s not that bad however, and frankly I thought it was going to be a lot worse than it actually is.

Being a low-mileage original Range Rover, the vehicle is as sweet to drive as you’d expect, with smooth gearchanges from the four-speed LT95 gearbox and the 3.5-litre V8 providing a musical soundtrack as we drive down the lanes. The team at Bishop’s Heritage rebuilt the original 3.5 carburetted engine, and it’s a beautifully smooth drive. Provided it’s not raining, the Octopussy tribute Range Rover really is a nice place to be.

Back in August, the Octopussy Range Rover recreation was sold at Classic Car Auctions for just under £60,000 to an anonymous bidder based in the UK. Although we don’t know who that person was, suffice to say that they ended up with a beautiful example of Range Rover craftsmanship that’s a fun and usable classic – provided that the sun is out. It’s also a handy vehicle to have around if you need to escape from a bunch of machine gun wielding Latin American baddies. Horsebox, micro-jet and Bianca not included. 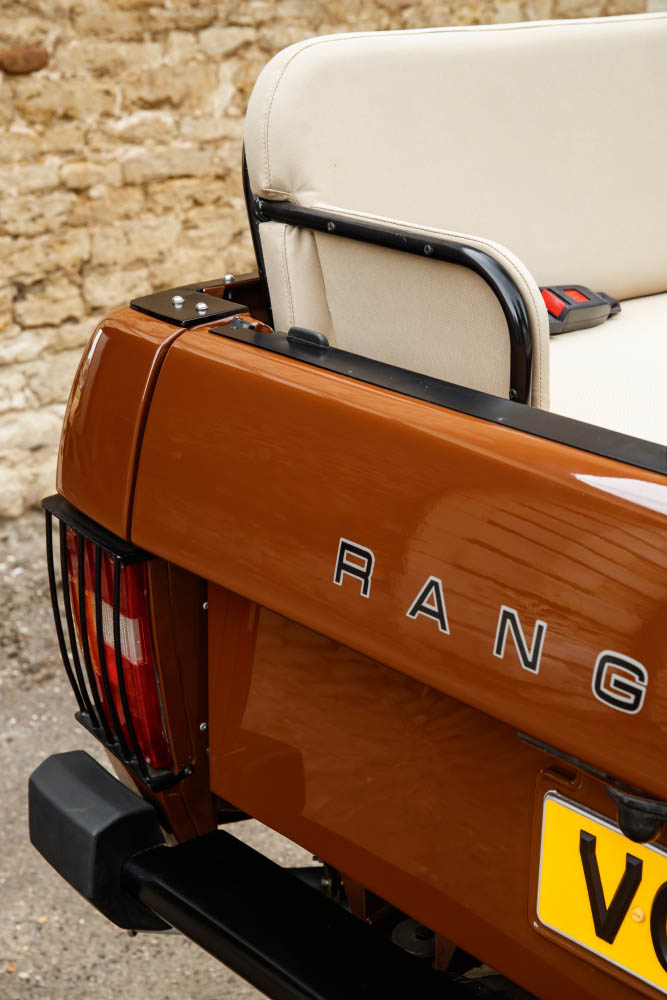 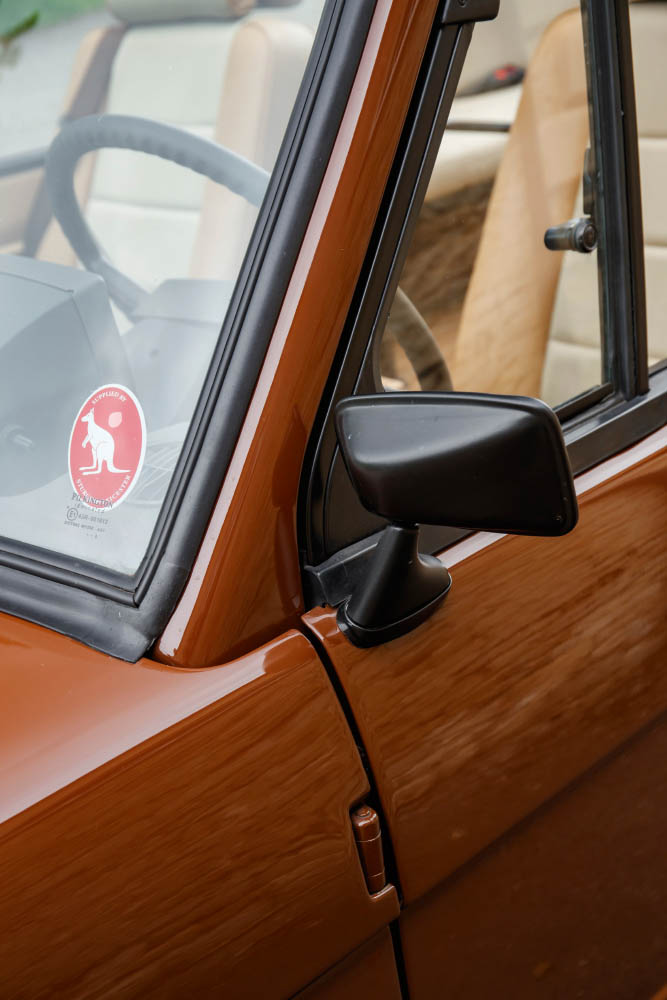 Period-correct side mirrors denote this as a VIN AA vehicle