A Tale of Two Ninetys The decade from the mid-1970s was a fascinating period in the development of the utility Land Rover, and part of the journey led to the creation of these two very special vehicles

This isn’t a story about real Defender 90s or their sophisticated new Defender replacements. No, this is a much more important story because it is about the very first short-wheelbase, coil-spring Land Rovers which, in the fullness of time, went into production as the Ninety and evolved into the Defender 90 when the new brand name was introduced in 1990.

Only one of the two Final Engineering Prototypes (FEP) you see here is truly a 90, because that is exactly what it measures from wheel centre to wheel centre. Ninety inches. The other one was built a month later with a slightly longer wheelbase of 92.9 inches. It was this longer version that eventually went forward into production.

But trying to sell a Land Rover Ninety-Two Point Nine was never going to be a smart move, so the marketing folk decided to stick with Ninety. JLR’s current marketing team followed the same logic when the New Defender short wheelbase model was launched, continuing to call it a 90 despite it having a wheelbase that had grown to a whopping 101.9 inches. 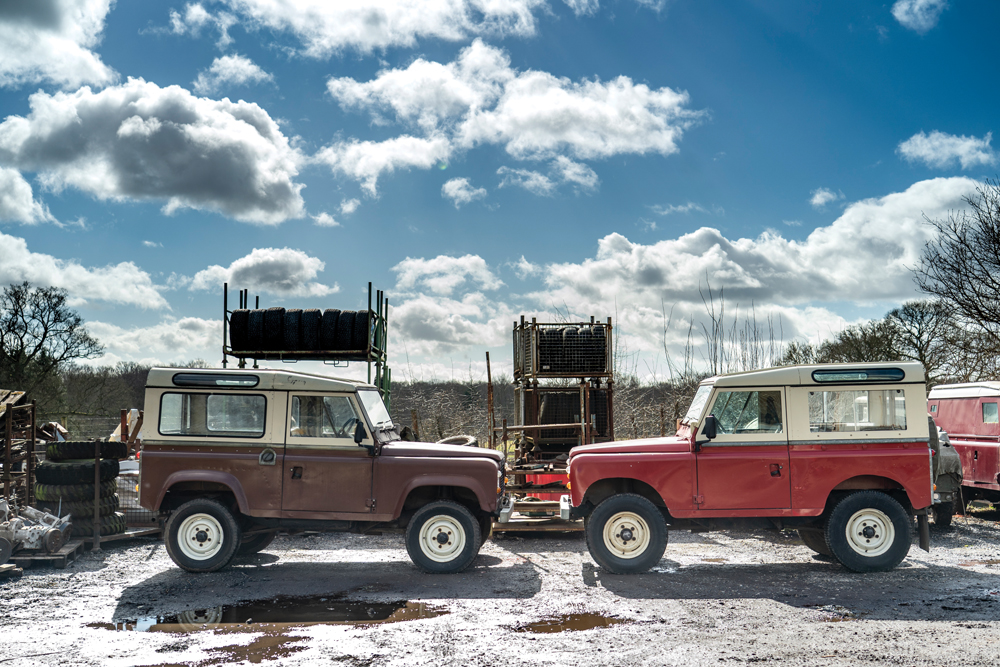 The extra 2.9 inches is noticeable – just!

There was at least one other true 90, built around seven years before the vehicles we feature here, and it was one of the famous Crathorne Mules that were created in 1976. The Mules were the four vehicles that Roger Crathorne was instructed to build to demonstrate the advantages of replacing the traditional leaf springs and drum brakes with the coils and discs that had proved so successful on the Range Rover. And it was the Range Rover that was the starting point for the mules, which were based on that vehicle’s chassis and running gear fitted with cobbled-together Land Rover body panels.

Two of the mules were built onto a standard Range Rover chassis and therefore retained the Range Rover’s 100-inch wheelbase, while the other two were cut-and-shut, one to an extended 110 inches and the other to a reduced 90 inches. Three retained the Range Rover’s 3.5 V8, including the 90, but one was fitted with a 2.25 petrol engine and a remote gearbox. No records of the mules have been found in company ledgers and as far as we know they were not issued with chassis numbers and none were registered for the road at the time.

The initiative to put a utility Land Rover on coil springs was part of a government-funded programme to modernise production facilities and vehicles and was referred to within the company as Stage 2. It is only relatively recently that this name has become more widely recognised within the enthusiast community, and it is also fair to say that there remain many gaps in our knowledge of this fascinating period of innovation and transition. Thankfully, there is a hardcore group of researchers and both current and ex-employees who continue to unearth fascinating new facts and rare period photographs. One of the current conundrums is whether there was in fact a second 90 mule! The true story will undoubtedly come out in the fullness of time. 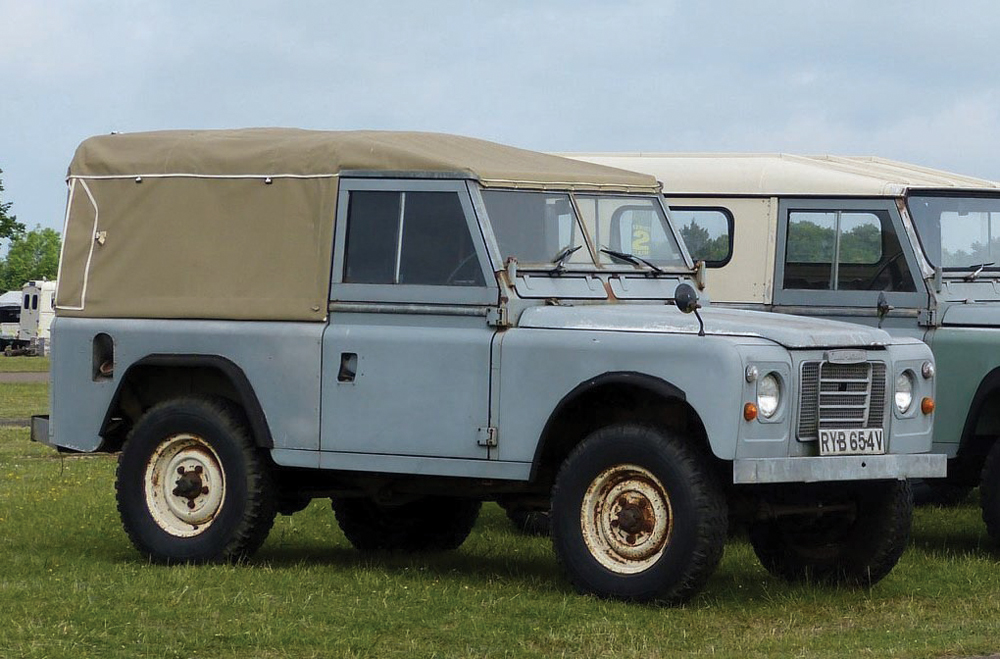 One 90 inch mule survives, and this is because of a peculiar quirk of fate, as related to James Taylor. Dennis Roberts was the finance manager of Land Rover’s Engineering Department and the owner of a second home in Somerset. He acquired a neighbouring cider apple orchard and needed a four-wheel drive vehicle to transport the apples from the top of the hill down to the road. Dennis approached chief engineer Tom Barton to see if he could borrow a suitable vehicle, and Tom offered him a 90 mule on the basis that it would not need to be driven on the road. The mule was duly delivered to Somerset and put to work.

Shortly afterwards, Dennis accepted a job at Ford and the mule languished in his West Country garage before he decided in early 1980 that he needed to formalise things by offering to buy it. Tom Barton suggested a price of £250 and the invoice described the vehicle as a ‘Lash-up Land Rover chassis’. Dennis decided to register it for the road, which is how it came to have the Somerset registration RYB 654V and a mysterious chassis plate that reads 90/1.

The Crathorne mules were followed by a series of coil-spring prototype and engineering development vehicles in 110- and 100 inch wheelbases, and for a while it appeared likely that the latter would be the successor to the 88. The 100 inch prototypes were put forward as contenders for military contracts due to be awarded in France, Switzerland and the Netherlands, but none of these went Solihull’s way, and while the 110 went forward into production there was a change of heart at Land Rover, and the 100 was shelved in favour of the 90. 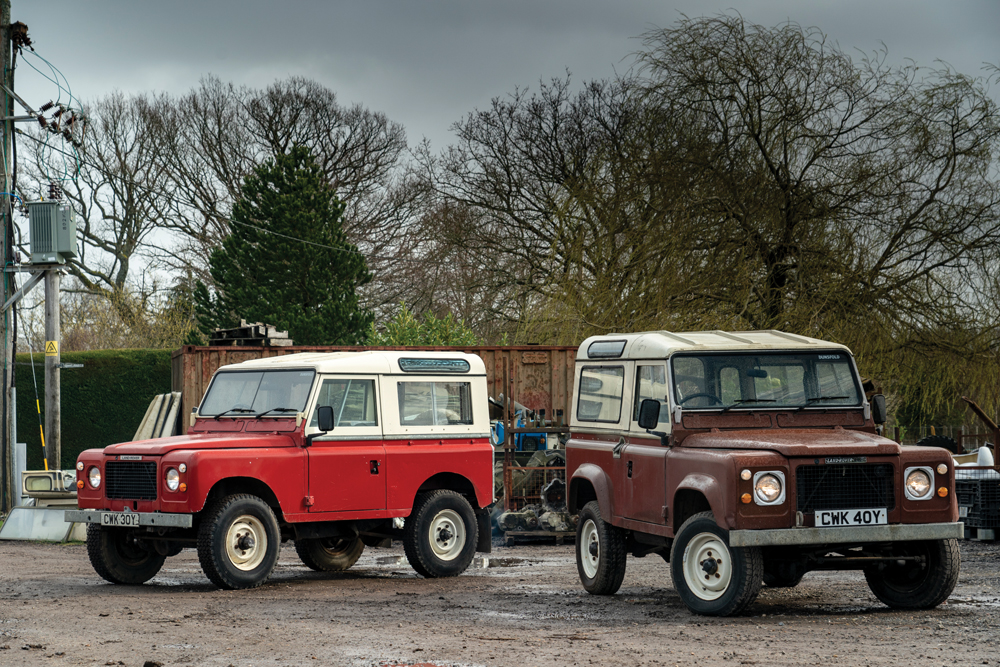 In 1983, 11 Ninety FEPs were built by Land Rover principal engineer Staff Dewson and his team. Work started on the first vehicle, 90-1, which is the red vehicle you see here, on November 10, 1982, and was completed on December 10. It was constructed on a bespoke 90-inch chassis built at the Bordesley Green plant and was fitted with a Range Rover front axle with Stage 2 steering linkage and disc brakes, and a rear axle fabricated from a Range Rover casing with Stage 2 hubs and 10 inch drum brakes. The testing and evaluation programme started in March 1983.

The second FEP, 90-2, which is the brown vehicle, was created by rebuilding CWK 46Y, an existing 110, with a chassis modified to 92.9 inches, and giving it new chassis and registration numbers. It was completed in May 1983. The remaining nine FEP Ninetys were rebuilt from 110s in the same way as 90-2 and with the 92.9-inch wheelbase. They were also given new chassis numbers and were added to the test fleet as they were built, with the last ones joining the programme in September 1983. Testing was completed in May 1984.

Dunsfold’s Philip Bashall believes the 2.9 inch stretch to the wheelbase was driven by what the company’s competitors were doing. “Daihatsu’s Sportrak had a bigger volumetric load capacity than the 90-inch Land Rover,” he says, “so the company lengthened the wheelbase in order to be able to say that its vehicle could carry more than its Daihatsu competitor. I’ve also heard another reason for the change, which was because the 90-inch wheelbase generated an unacceptably choppy ride!”

James Taylor has suggested that the change was made at the request of the company’s chief engineer, Mike Broadhead, who felt the 90-inch wheelbase did not offer significant improvements on the 88-inch it was supposed to replace. Either way, the production Ninety with its 92.9-inch wheelbase was launched in 1984, a year after its 110-inch coil spring big brother. 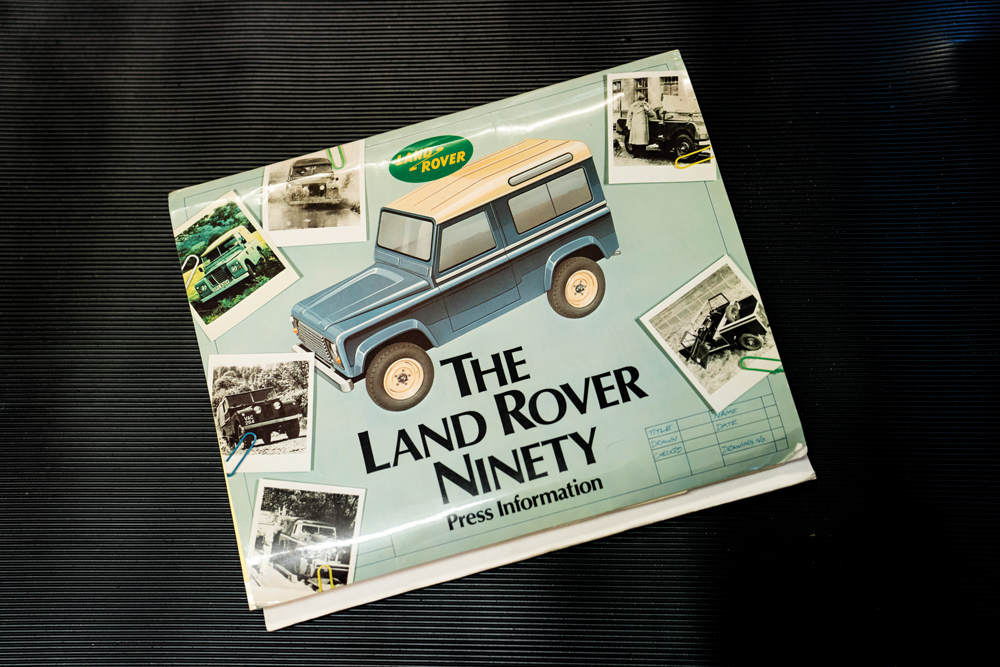 According to unique factory vehicle build reports and test programme records that are held in the Dunsfold archive, the prototype Ninetys were fitted with four-cylinder 2.25 petrol or 2.5 prototype diesel engines, with one vehicle having a 2.5 petrol prototype. Seven were right-hand drive, and four were left-hand drive, and they carried a mix of station wagon, truck cab, hard top and full-length tilt bodies.

Philip Bashall heard some years ago that one survives in Canada that has a V8 installed. The surviving factory records make no mention of a prototype receiving a factory-fitted V8 or of a vehicle being sold to Canada, so this particular rumour remains unproven.

At least one vehicle is known to have survived against all the odds. 90-6, registered FWK 437Y, was disposed of by the company to MIRA at Nuneaton in July 1985 for use as a site hack. In 2019 it appeared for sale on social media and, once it was confirmed to be genuine, was eagerly acquired for preservation by a leading UK-based collector of Stage 2 vehicles. It still has its prototype 2.5 diesel engine. 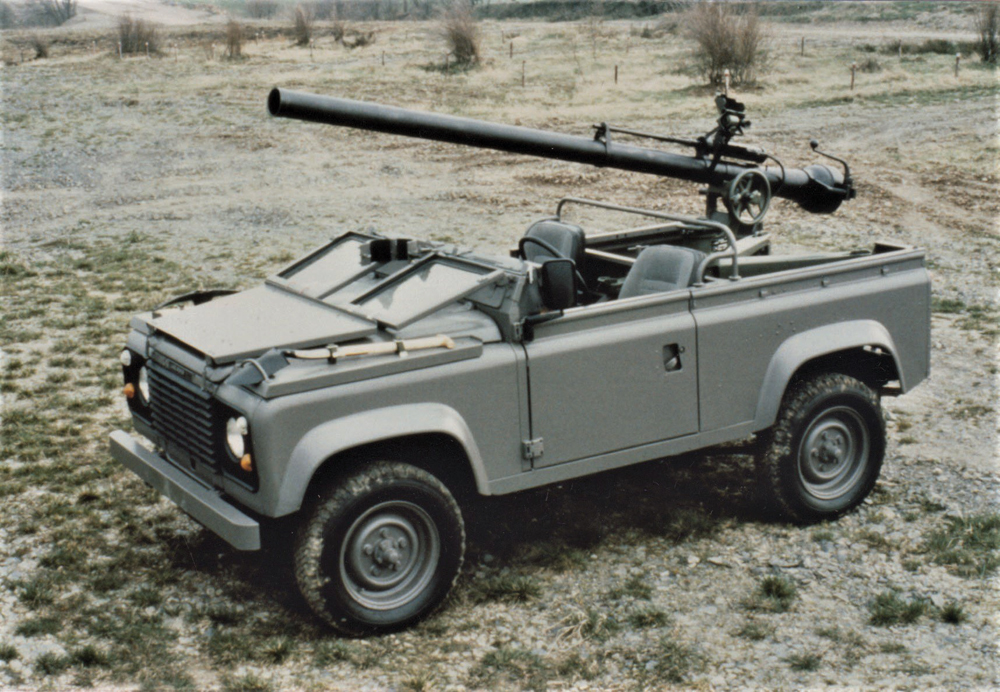 FEP 90-10 was converted to an M40 Recoilless Rifle Gunship by Marshalls of Cambridge in 1984 and used for development work by Land Rover, before being despatched to Marshalls in March 1985, supposedly for scrapping. Philip Bashall believes it was actually retained by them and used as a demonstrator for a number of years before finally being broken up in the early 1990s. 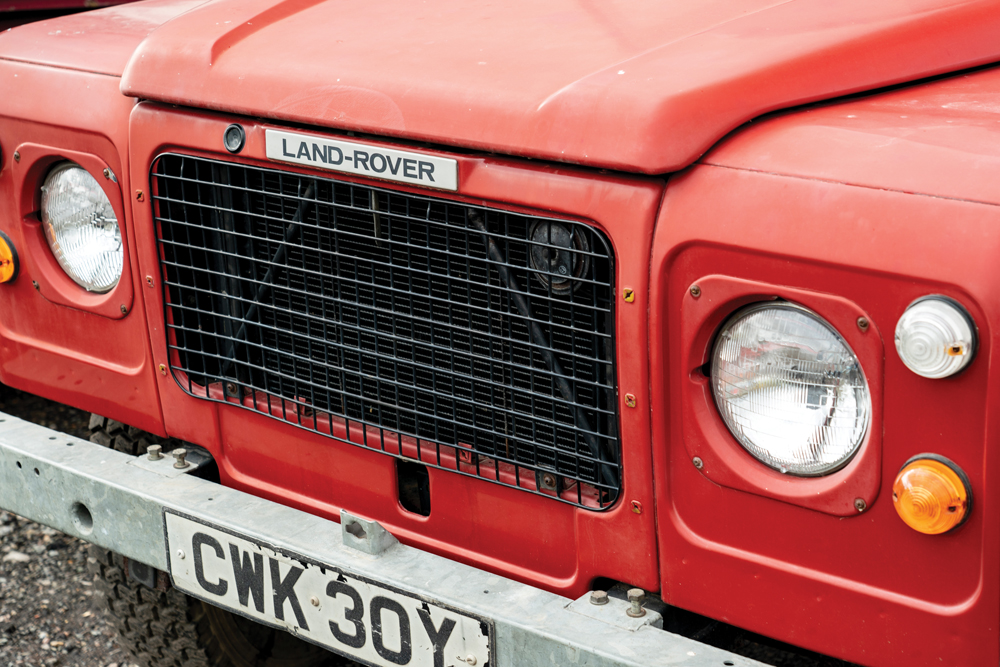 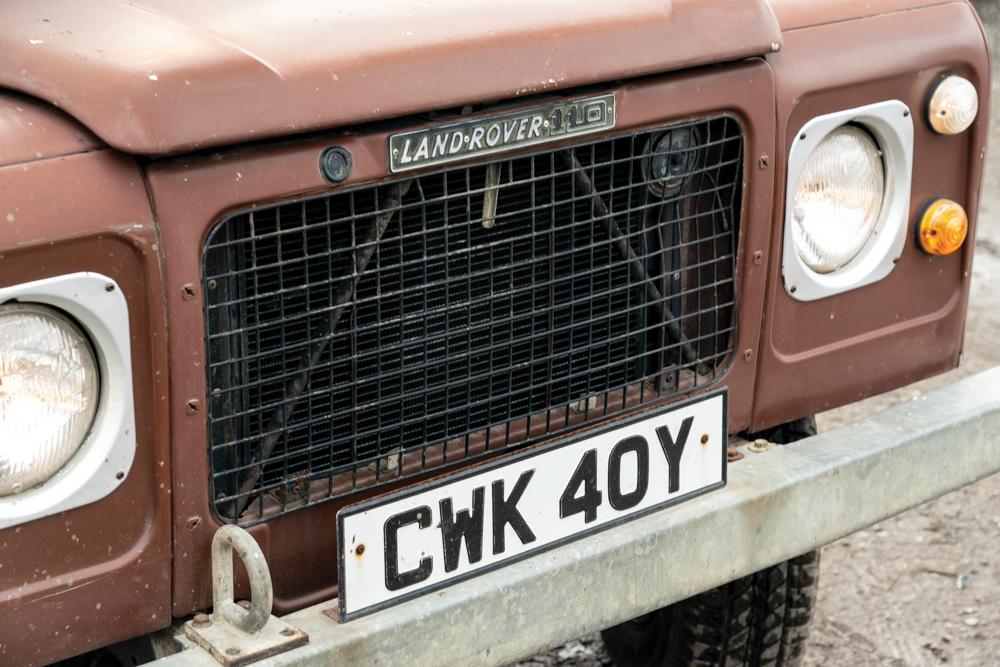 Both vehicles share the Stage 1 grille, although 90-2 has the 110 badge of the donor vehicle

Which brings us to prototypes 90-1 and 90-2, the two vehicles you see here that are now in the care of the Dunsfold Collection. Philip Bashall takes up the story: “My late father, Brian, spotted them in the scrap compound at Solihull on one of his regular visits, and made enquiries about whether they might be saved. Brian could be pretty tenacious, and there were also quite a few very supportive people at the factory who were keen to ensure prototypes like these were saved. It’s important to remember that there wasn’t really an established and structured Land Rover company programme to save vehicles like this at the time. 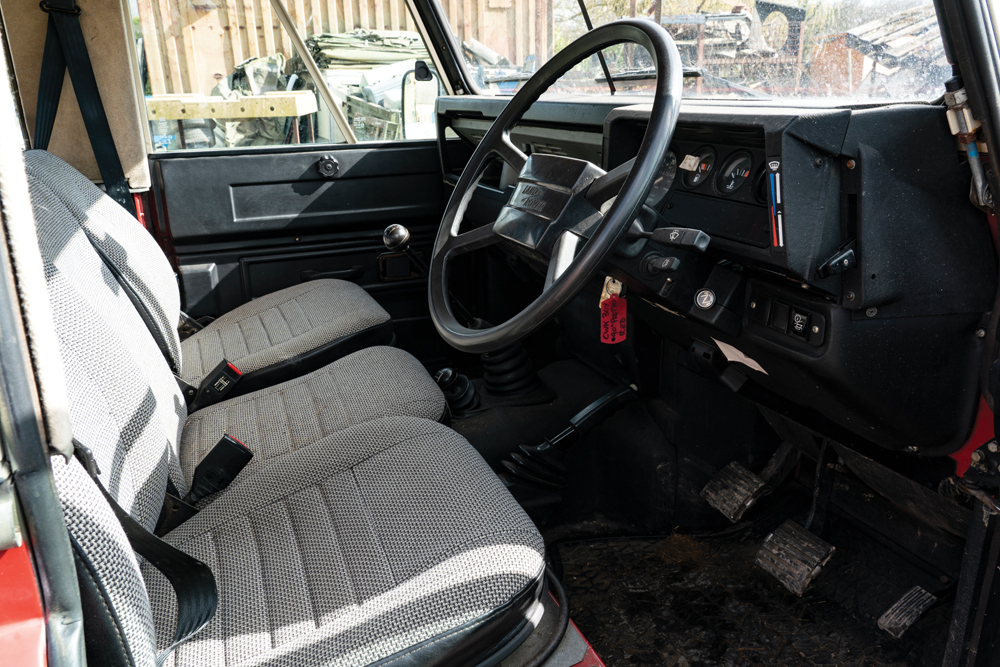 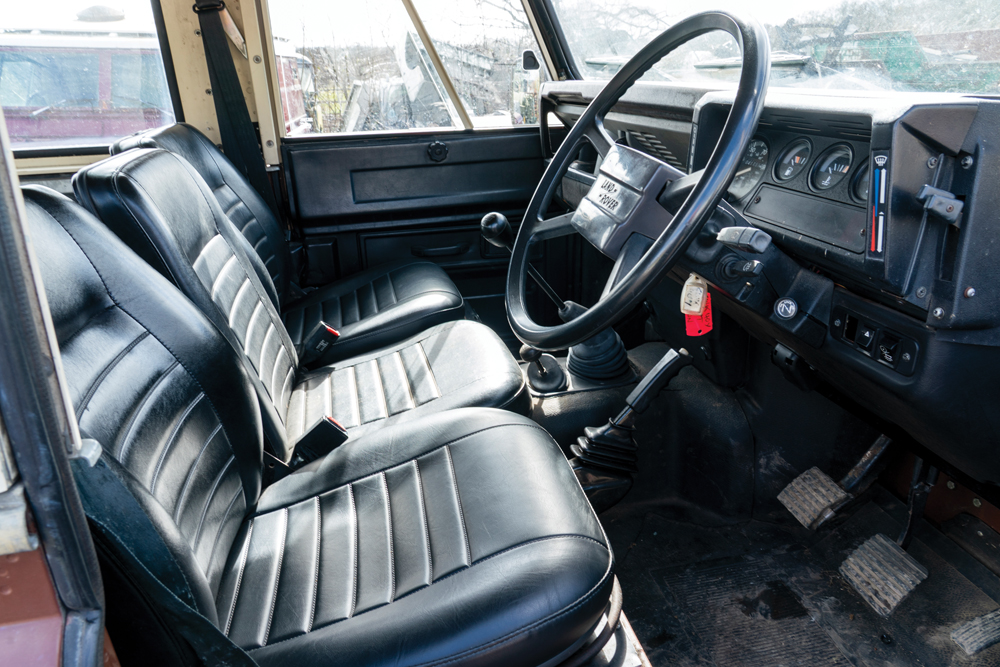 Engineering boss Mike Broadhead arranged for 90-1 and 90-2 to be donated to Dunsfold in 1984, and we later bought 90-3 from the company as well, which was missing its engine and gearbox. As far as we know, all 11 prototypes were over-painted in NATO green and carried stencilled numbers WD 1 to WD 11 on their bumpers, presumably to make them look like anonymous military vehicles. They also had black tape stuck on the inside of their one-piece windscreens to make them look like earlier split screens.

“90-3 was put back on the road with a standard 2.25 petrol engine and it was re-registered with the number ORB 385. We used it for regular off-roading and greenlaning activities for a while, and then it was re-engined in the mid-1990s with the support of Land Rover parts and equipment and one of their retrofit 300Tdi kits. I think we also added power steering at the same time, because the retrofit kit required it. Eventually it was deemed surplus to the Collection’s requirements, given that we had 90-1 and 90-2 which were far more original, and my father sold it to one of DLR’s employees. It still exists and is owned by a young enthusiast who lives close to us in Surrey. He loves it because it was his first Land Rover. 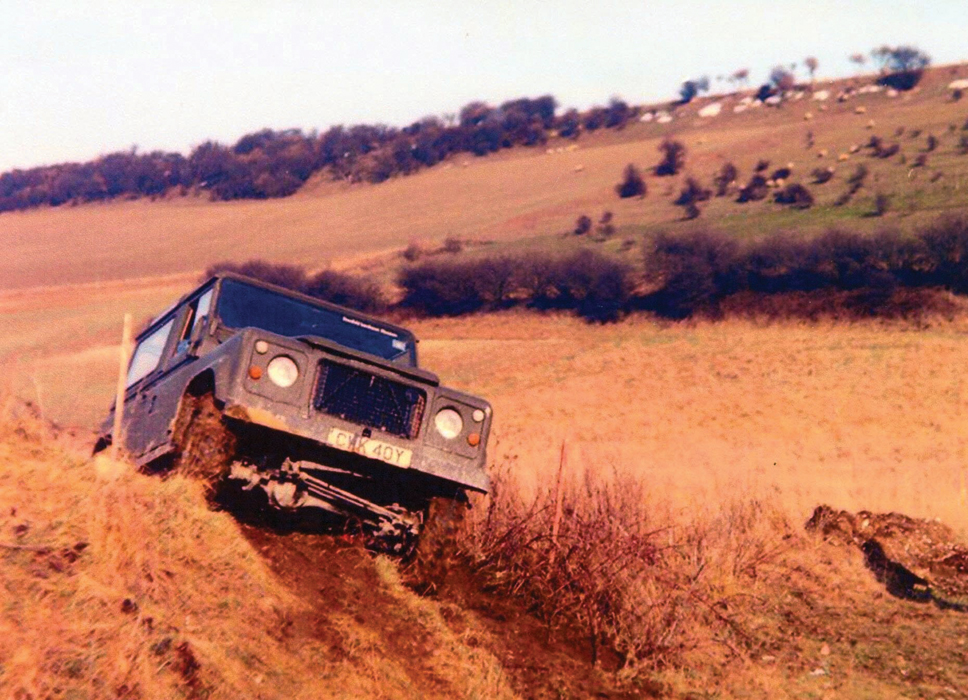 “We used 90-1 and 90-2 quite extensively, and Brian used 90-2 in Southern Rover Owners’ Club trials representing the Collection. In the early days, a coil-spring short wheelbase Land Rover had a real advantage when it was competing against its leaf-spring ancestors! Both Ninetys were eventually repainted into their original colour schemes, as found hidden beneath the NATO green, which had been put on with a roller and a brush! Nowadays we would have left them as they were, and I’m tempted to put one of them at least back into NATO green. The vehicles have always been popular exhibits and have been shown over the years at Land Rover events as far afield as Norway. Closer to home, they’ve attended several factory events and the Eastnor 50th and taken part in the Gaydon Heritage Run.”

Dunsfold’s 90-1 and 90-2 are extraordinarily important survivors from this intriguing decade in Land Rover’s rich history. They are arguably the most important ancestors of the coil spring Ninetys and Defender 90s that were in production from 1984 to 2016. And, of course, it is highly likely that they would never have survived if the Collection had not been there back in the day to provide them with a home and a secure future.