There are more myths associated with it than any other Land Rover, but the Forest Rover undoubtedly has a charm of its own. Pioneering new research by the authors means we can bring you the full story…

For many years, Land Rover enthusiasts driving in the Scottish Highlands could look forward to the otherwise unremarkable junction between the A85 and the A827, between Crianlarich and Killin. This is the location of Lix Toll Garage, an independent Land Rover specialist that had a pair of eye-catching vehicles displayed on their forecourt. Both were Series IIs. One was a bright yellow Cuthbertson conversion fitted with tracked bogies, and the other was a Forest Rover. When the garage changed hands they were sold, and both are now part of Claudio Sabo’s collection in Brazil. 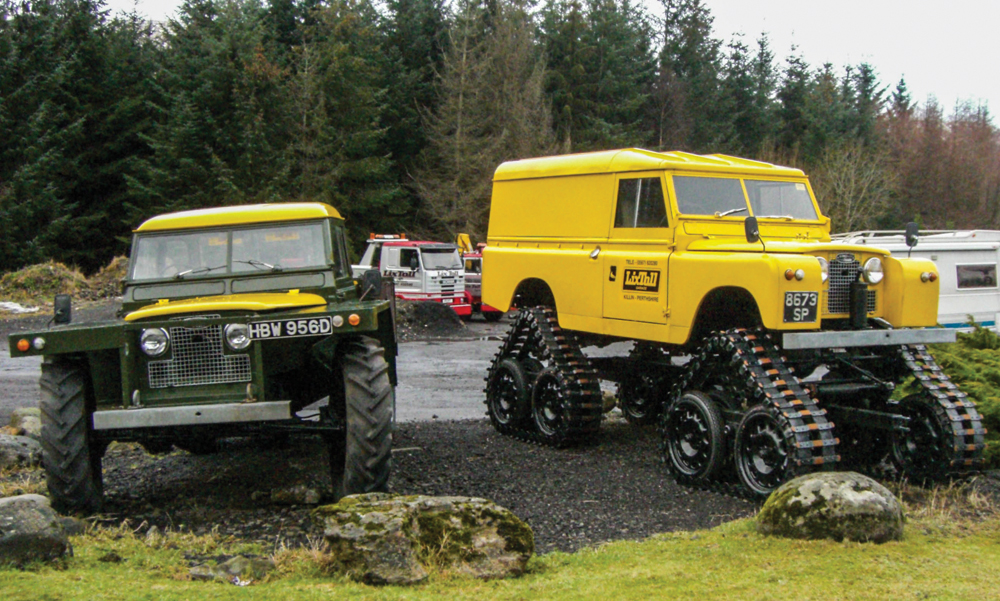 The Lix Toll Forest Rover was one of what are believed to have been just nine examples built by Roadless Traction Ltd of Hounslow in the late 1950s and early 1960s in response to a specific requirement from the Forestry Commission, which had been grappling with the fact that its fleet of go-anywhere Land Rovers wasn’t actually going anywhere at all, when it came to driving over the type of terrain found in forestry plantations. 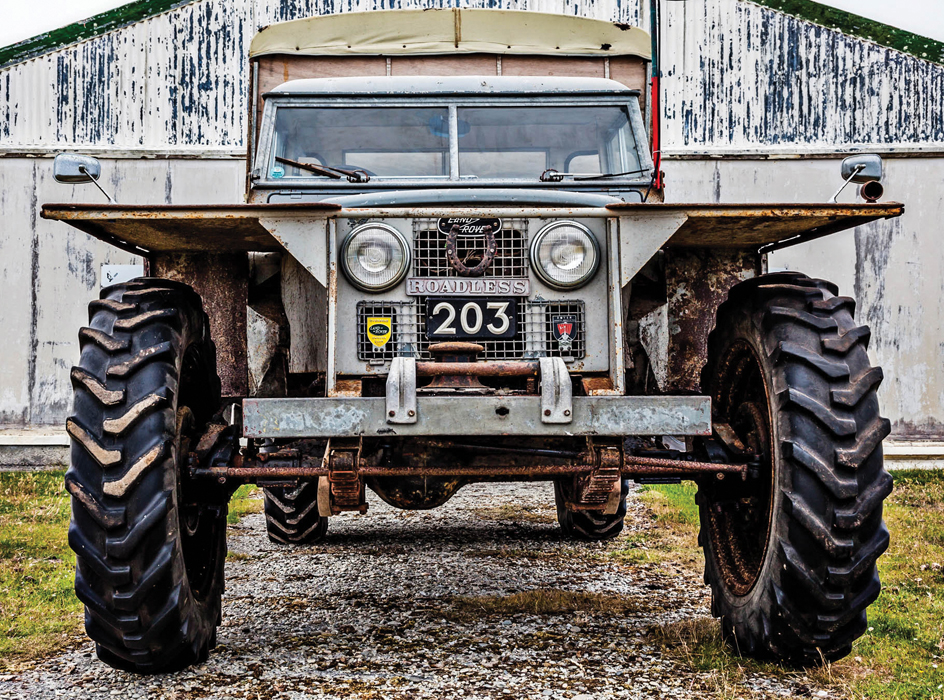 Until 2007, 203 was used for the weekly drive from Salvador to Stanley in the Falkland Islands

Between 1958 and 1959 the Commission appears to have utilised its own in-house development and test vehicle in an attempt to devise something that could do the job. Based on a Series I 86in, it was a fairly basic mule with most of its bodywork removed. It was tested initially with 10 by 20 inch Terratires but these were quickly replaced with ten by 28 inch tractor wheels. Steering was all but non-existent until someone came up with the cunning plan to reverse the convex front wheels, which extended the front track sufficiently to allow steering, but only just. 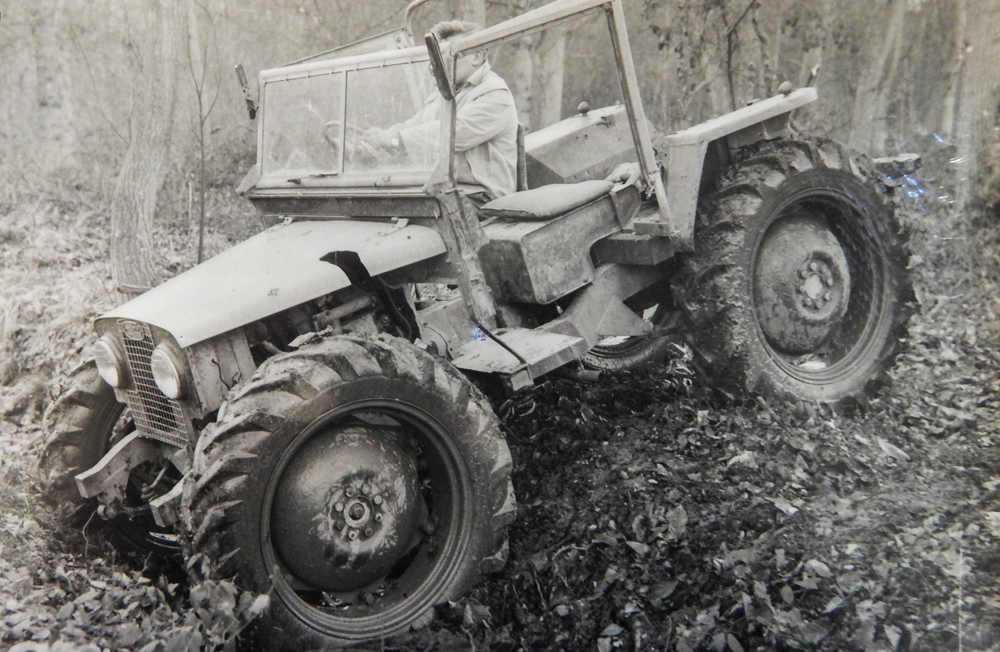 After testing the vehicles at its Alice Holt research facility in Hampshire, the Commission’s Machinery Research Officer, Colonel Shaw, concluded that it would be possible to create a purpose-built Land Rover with high ground clearance that would be able to navigate the ditches, drains and fallen timber typical of the Commission’s plantations; terrain that was proving impossible to cross in a standard Land Rover. 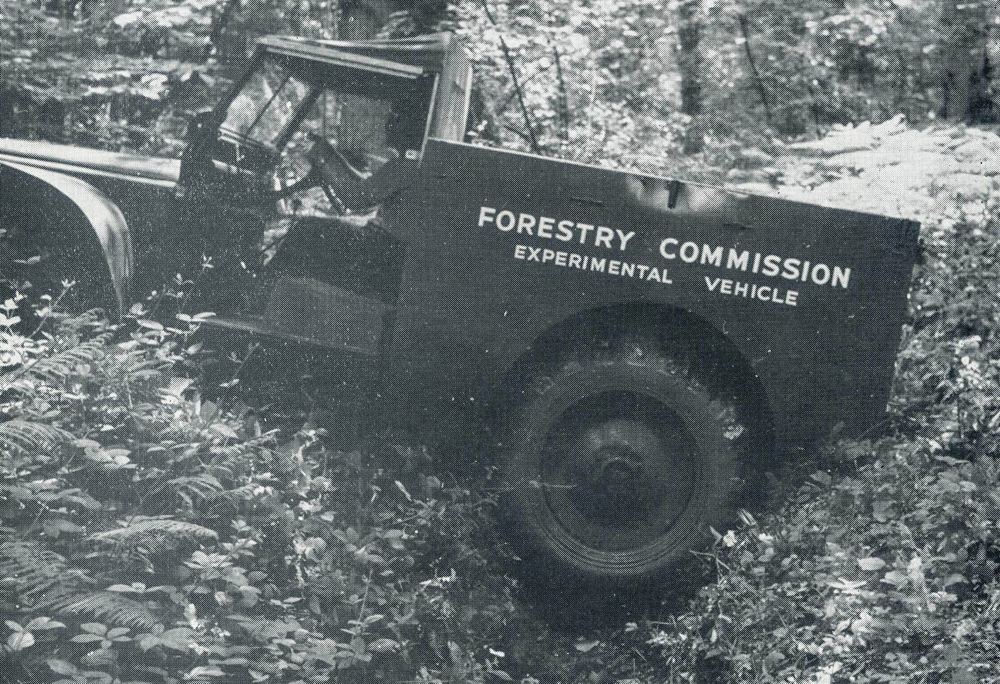 Roadless Traction Ltd of Hounslow was approached to take the project further. The company was founded in 1919 by a group of Army officers led by Colonel Phillip Johnson, a brilliant engineer who had worked on tracked vehicles during the First World War. Between 1925 and the 1950s, Roadless built crawler and half-track conversions based on several makes of tractor, and from 1953 built four-wheel drive conversions largely based on Ford tractors. The company went into liquidation in 1983 but was revived under new ownership, only to close again not long afterwards, at which point production ended.

After a succession of owners during the 1980s and 1990s, the business and the remaining parts stock were acquired in 2007 by tractor dealers John Bownes Ltd, who were the last official Roadless dealer to be appointed back in 1982. 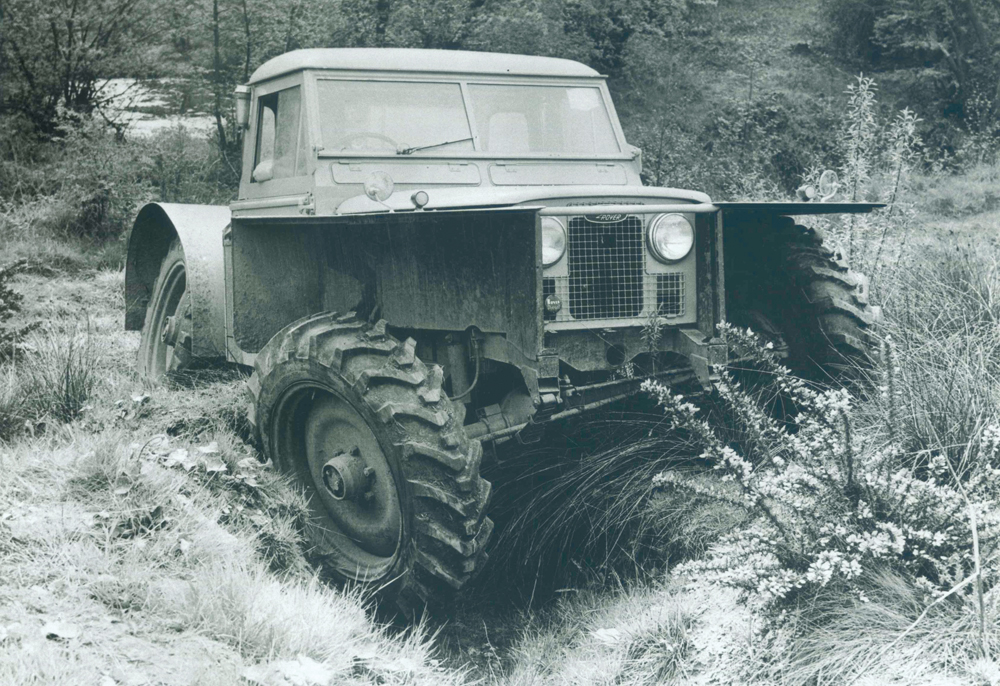 The Forestry Commission’s prototype was, according to announcements made by Roadless, handed over to them, but whether this was the 86in mule is unclear. It’s difficult to imagine it would have been, and an enduring mystery is whether the Commission, having proved the concept to its satisfaction with its much-abused Series I, then constructed a second prototype based on a Series II 109. Roadless stated that they had converted the prototype they received from the Commission and returned it to them, but what eventually reappeared back at Alice Holt was a very tidy Series II 109in with a bespoke ‘fire tender' rear body sign written ‘Forestry Commission Experimental Vehicle’. Roadless described it as their ‘First Prototype’ and it appears to have ended its days as a training aid at Telford Agricultural College, where it was scrapped around 1979.

The original Land Rover gearbox and transfer box were combined with planetary reduction hub axles made by Kirkstall Forge Engineering in Leeds (not Studebaker as is often claimed) and fitted with 10 by 28 inch tractor wheels. The front axle track was 75 inches, 14 wider than the rear in order to allow for steering lock, but the turning circle was still a massive 40 feet! Top speed was around 30 mph on a good day. 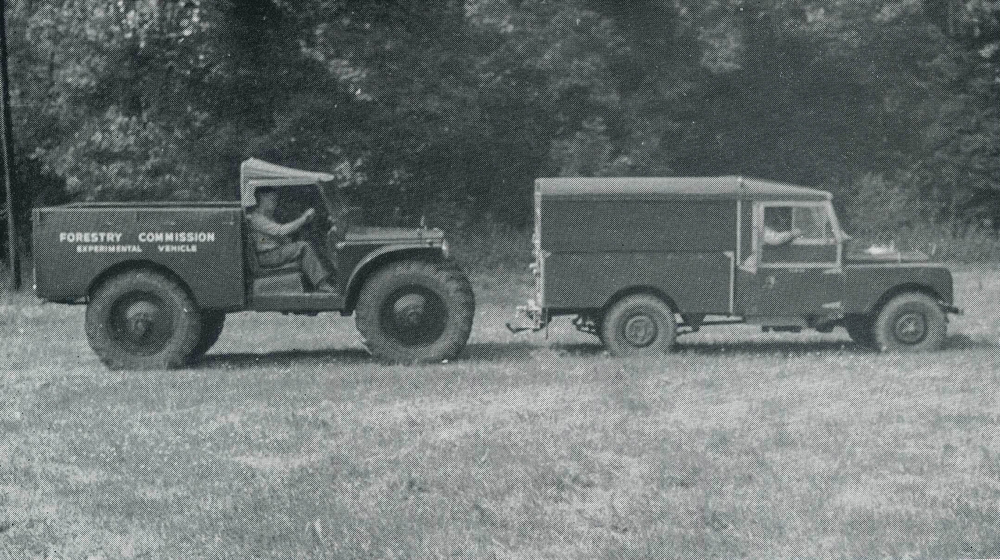 Meanwhile, Roadless had built their own diesel-engined ‘Production Prototype’ based on a Series II 109. The bodywork was extensively modified with large, flat panels replacing the front wings and new rear tractor-type mudguards. It was sent to Solihull where Rover would complete their own assessment prior to giving their official approval to the conversion, a very important final step before Roadless could actually start trying to sell the Forest Rover. It was soon clear that the MIRA test circuit used by Rover for testing Land Rovers was far too easy for the Forest Rover and another course was developed which had obstacles way beyond the capabilities of the standard models.

Tests were also successfully carried out on a Scottish peat bog ‘which local drainage contractors were convinced could never be negotiated by a wheeled vehicle’. Additional tests were completed at Chobham to demonstrate potential military applications too, and the production prototype also completed 2000 miles of running on MIRA’s cross-country course at Lindley. 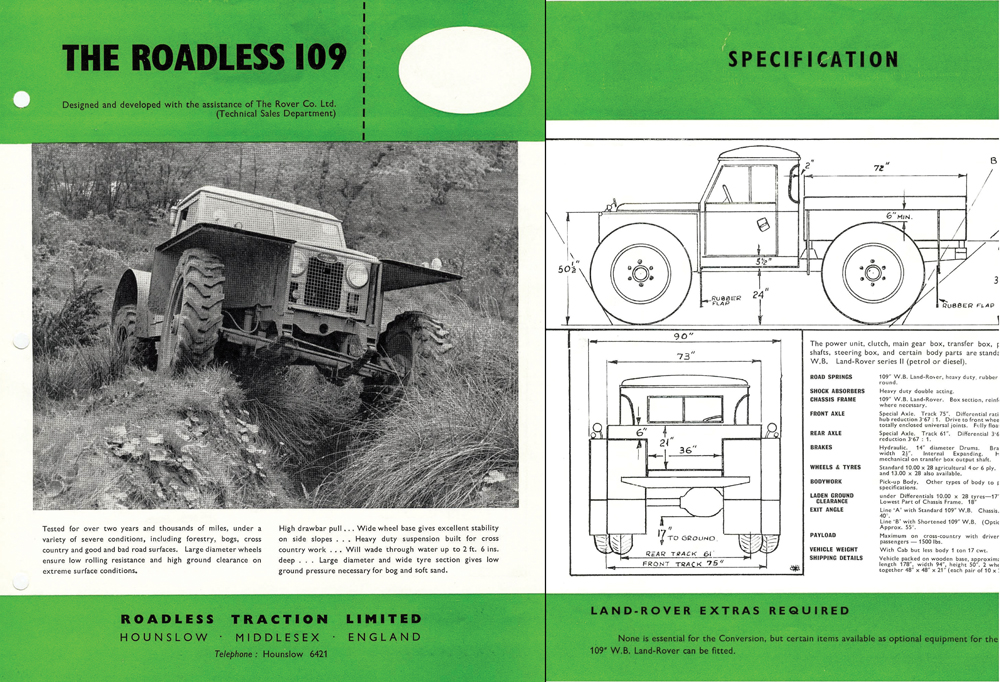 Rover’s blessing was granted after some 18 months of evaluation, and Roadless was able to launch the vehicle in September 1961. It was announced as ‘a vehicle with astonishing performance’ that was suitable for ‘cross country exploration; prospecting parties; military reconnaissance; surveying; hunting, shooting and safari; operations over desert and wind-blown sand; farm use; peat or other similar bogs, where vegetation provides some kind of root mat to prevent the immediate bellying or complete submergence of the vehicle; and with appropriate bodywork as a luxury, go-anywhere vehicle for up to four people’. Additionally, and perhaps as a nod to the dying days of the Empire, it could also be used ‘by Overseas Government Officials touring areas under their control during rainy seasons’. 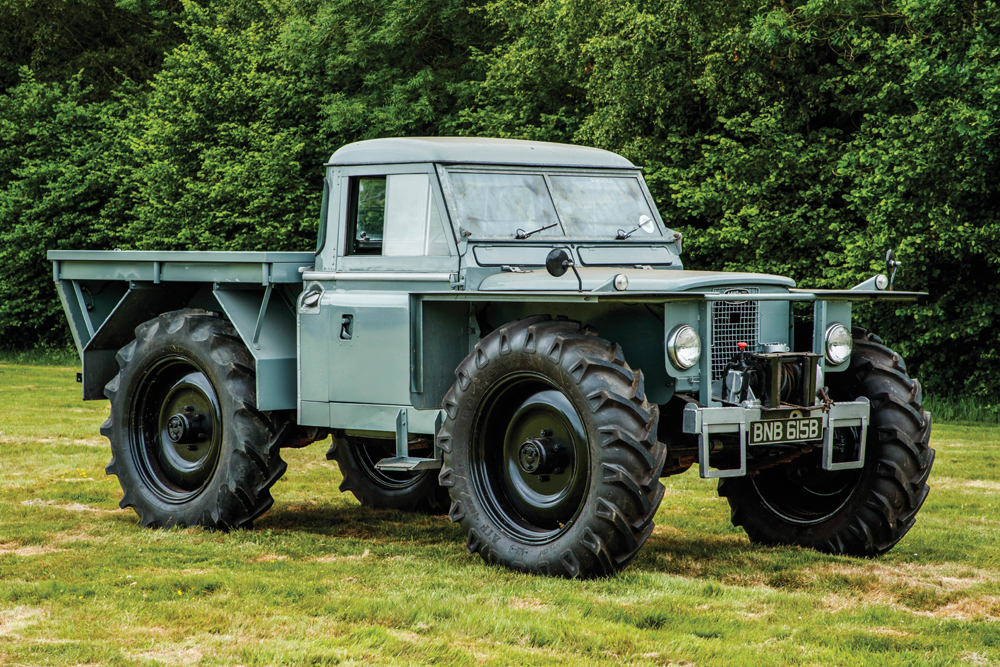 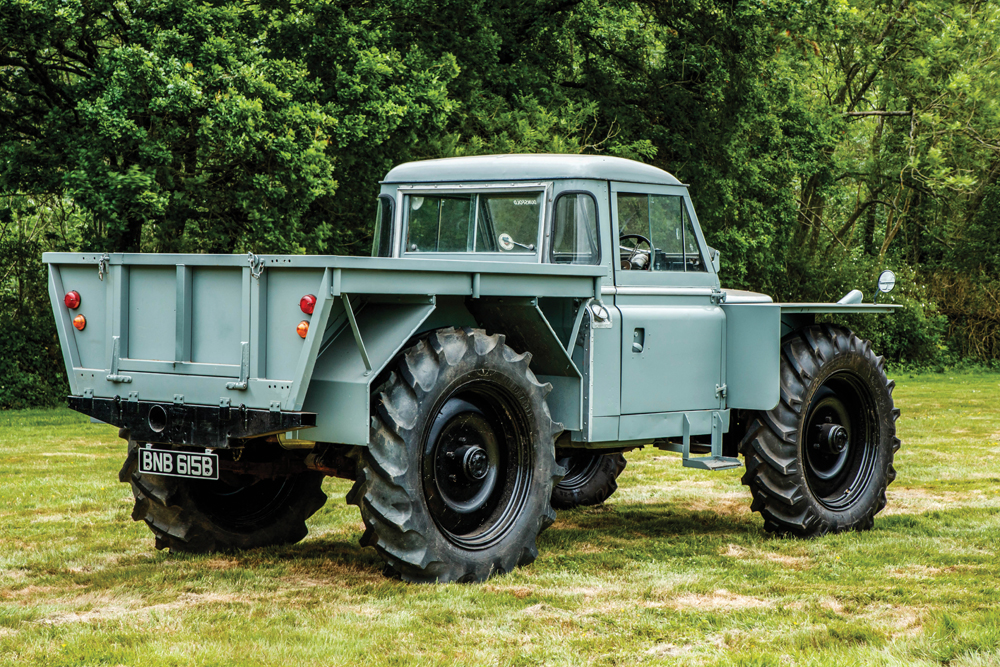 The Dunsfold Collection’s Forest Rover as it is today

There was no hiding the fact that this was a huge and cumbersome vehicle which weighed almost two tons. It had 17 inches of ground clearance under the rear diff – the front wing was over 50 inches high and the door was a colossal 29½ inches above the ground. Fuel consumption was officially stated as 10 mpg and a wading depth of 30 inches was claimed. List prices were £1558 for the 2.25-litre petrol model and £1658 for the diesel version. Pretty expensive, when the list price for an 88 inch with canvas tilt was £640!

Customer orders in quantity did not materialise and with only nine vehicles believed to have been completed it can hardly have been a resounding commercial success for Roadless Traction. It would also be fair to say there are many myths and mysteries surrounding these fascinating vehicles, and despite the efforts of many historians and researchers over the years there are still gaps in our knowledge.

For many years, it had been assumed that as many as 20 Forest Rovers might have been made. The general consensus now is that axles were prepared for 20 vehicles, but the best guess for the number of Forest Rovers actually built by Roadless is nine. There is evidence that axles were built with different ratios and with both drum and disc brakes. Those axles not fitted to vehicles apparently went to the Institute of Hydrology as spares for their two vehicles but, with the exception of a single rear axle that was saved and sold on for use in rebuilding XSY 698, all the others were scrapped. 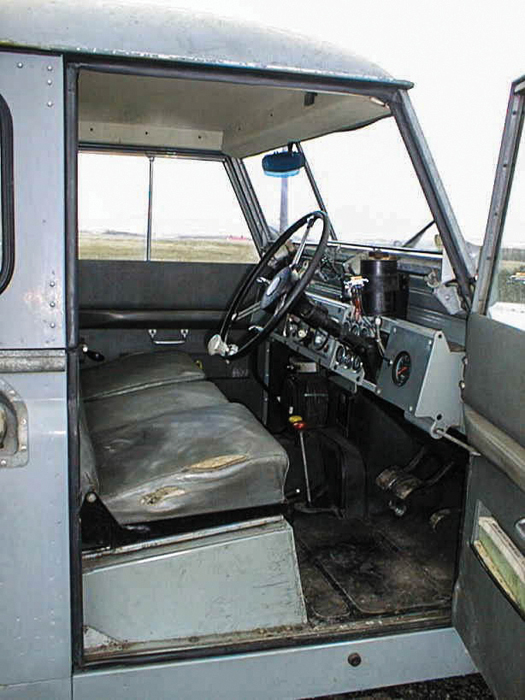 Today, six Forest Rovers are known to survive, in full or in part, which is a remarkable proportion of the number built. One theory is the Production Prototype ended up in Australia with the Snowy Mountains Hydro-Electric Authority, but close studies of the available photographs show that the Australian vehicle is not fitted with Kirkstall axles and is therefore unlikely to be a Roadless Forest Rover.

The only left-hand drive Forest Rover was sent to the United States and subsequently found its way to Canada. What remains of it is now in the safekeeping of enthusiast, restorer and collector Ike Goss of Pangolin 4x4 in Oregon. Ike is planning to rebuild it and has many of the important bits such as the axles, dash and wheels, and has been steadily gathering together other parts as well. He is particularly keen to find the sun gear for one of the planetaries and two of the end caps for the axles, as well as the VIN, so if you think you can help do get in touch.

Another example is known to have been a non-runner on an estate in Perthshire, but nothing has been heard of it since the 1990s. The BBC acquired an example that was registered 313 CXC and this was last seen near Gairloch in Scotland, where it was scrapped. 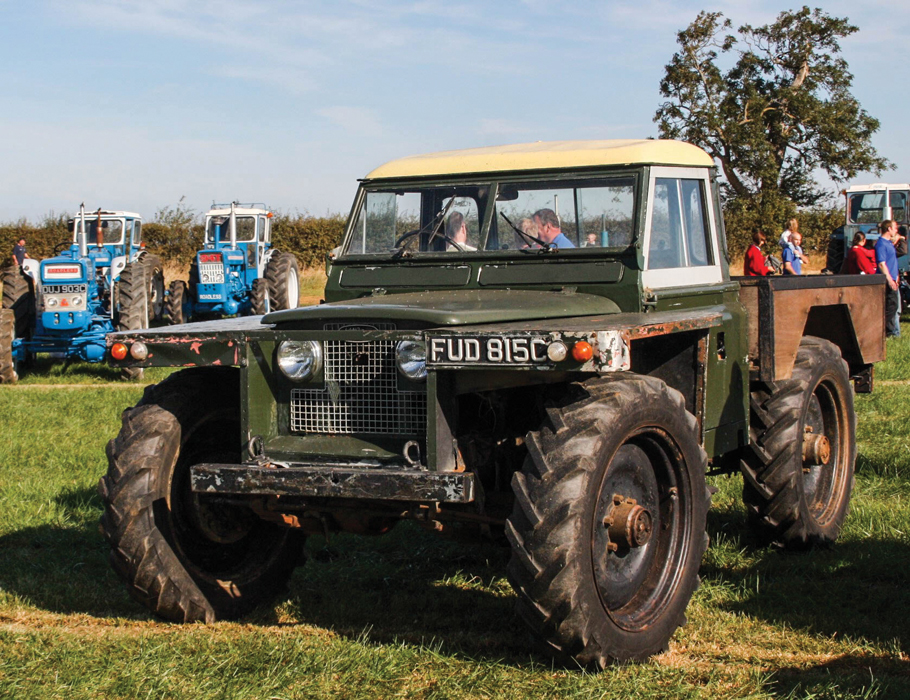 The five vehicles that are known to be intact include demonstrator XSY 698; the Institute of Hydrology’s FUD 815C which is believed to be in Northern Ireland; the Lix Toll example HBW 956D which is now in Brazil; the Dunsfold Collection’s BNB 615B, and the famous Falkland Islands example 203 which is in Nick Pitaluga’s collection.

BNB 615B was delivered new to the Central Electricity Generating Board’s Rheidol Power Station in Wales. It was apparently driven the 200 miles from the Roadless Traction Ltd works in Hounslow to Rheidol by some unlucky soul who clearly drew the short straw! The vehicle spent its time at Rheidol on dam maintenance work and had a Ministry test every year until 1987, when it was retired. It was known affectionately as the ‘Rheidol Bug’. 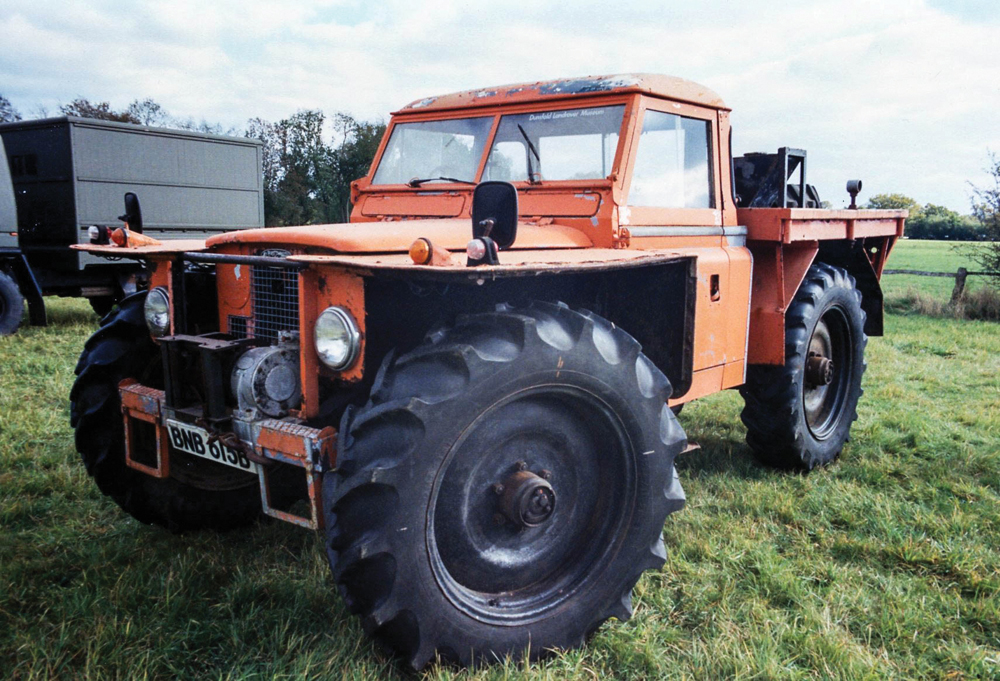 The CEGB decided to offer it on a 99-year loan to Dunsfold in 1989 and it arrived resplendent in its bright orange but very tatty CEGB livery. It had a partial rebuild in 2004 at the REME workshops at Bordon and was fitted with a replacement chassis made by Marsland because the original had snapped in two! In recent times it has received further attention including a repaint into grey livery.

In September 2015, Dunsfold’s vehicle had the notable experience of being driven around the race circuit at the Goodwood Revival as part of the parade of over 50 pre-1966 Land Rovers organised by JLR. The two laps it completed on the day were probably the fastest it has been driven since it was delivered to Rheidol! 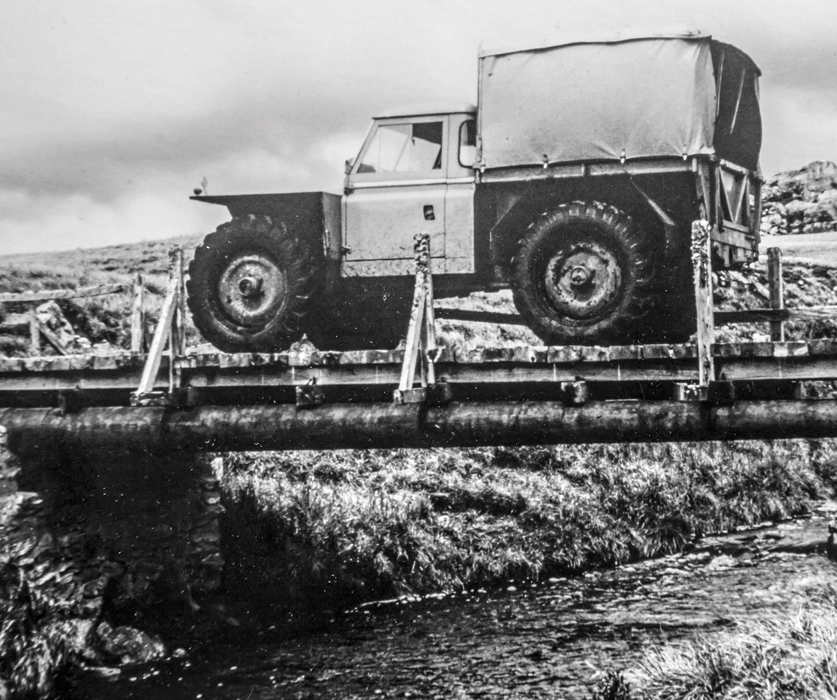 And last but not least, there is the example built to order in 1962 for Robin Pitaluga and delivered to his farm on the Falkland Islands. It was bought specifically for the 72 mile journey from the farm to the capital, Stanley, a journey that in those days took eight hours in summer and up to 14 in winter. It is the only Forest Rover to feature a de-luxe cab and has the optional canvas tilt made by Redvales Ltd of Walsall. Along with the Dunsfold example, this vehicle also had its spare wheel mounted on a massive gate on the back of the body, although Robin stopped carrying it quite early on, in favour of a jack and tyre irons!

It was in weekly use as a working farm truck for over 40 years, finally being retired in 2007. It now forms part of Robin’s son, Nick’s, Land Rover collection at Gibraltar Station, Salvador, and was photographed by Jean and Denis Crankshaw in 2015 for their book ‘Land Rovers of the Falkland Islands’, which is worth adding to this year's  Christmas list. Keep an eye on the Dunsfold Collection’s Instagram and Facebook channels if you want to see The Rheidol Bug in action! 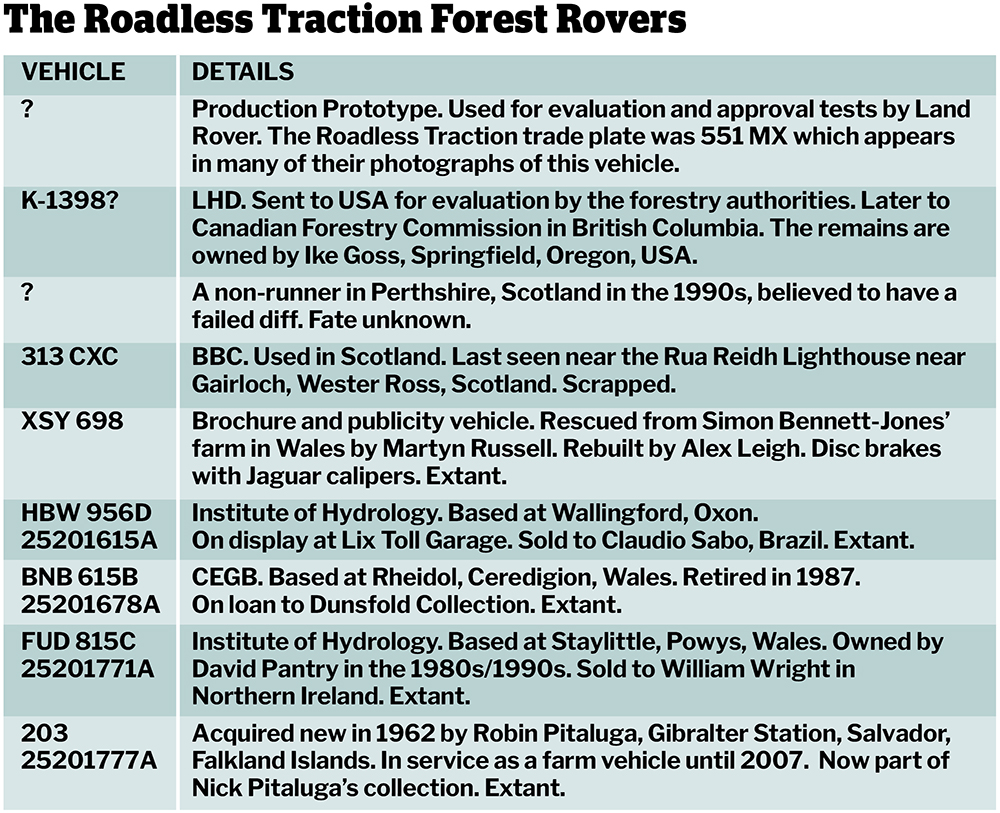