It started with a Station Wagon Nick alongside just some of his extensive collection : credit: © Craig Pusey

Over the past 22 years, Nick Parr has gathered together an impressive and quite probably unique Land Rover collection, and it all began with the happy coincidence of a bonus burning a hole in his pocket and a nearly-new 50th Anniversary Defender 90 on the forecourt of his local main dealer.

“In 1998 I’d just received a cash bonus from my employer for completing 20 years of service,” says Nick, “and by coincidence it happened to be equal to the price tag on a stunning Atlantis Blue special edition Defender. My wife, Lyn, rather helpfully pointed out that what we’d never had, we’d never miss, and so the bonus was handed over and the 90 came to live with us. And that’s how my passion for station wagons began.“I think my interest in Land Rovers had probably begun many years earlier, when my brother was an ambulance driver with the Civil Defence Corps. I joined him on a few exercises and got to spend some time as his passenger, often in a Land Rover. Some years later I remember being outraged that the UK government was planning to sell Land Rover to General Motors. In 1986 a massive national campaign was organised that included a convoy of Land Rovers delivering a petition to Downing Street. Land Rover was seen as quintessentially British and the whole attempt to privatise it by selling it to a foreign company triggered an outpouring of patriotic fervour. The government backed down. Nevertheless, Rover was privatised in the end, being sold to British Aerospace in 1988 in what I always thought was a politically motivated shotgun marriage. The level of public dismay at the planned sale to the Americans seems rather quaint nowadays, with Land Rover having since been owned by BMW, Ford, and now Tata of India!

“I would have loved to have been able to buy a Land Rover to show my support for the Keep Land Rover British campaign, but at the time I just couldn’t afford to do so. I was already a collector of diecast toys and models, so I consoled myself by switching the focus of my collection to the Land Rover. Many decades later I have a room at home that is dedicated to the collection, which now numbers thousands of individual models. I still enjoy adding to it from time to time.

“Looking at the model Series Is, IIs and IIIs, the 90s and 110s, and the Defenders, I always thought it would be wonderful to have a few full-sized versions. In due course, my developing career made me lucky enough to be able to afford to go in that direction. I’ve even been able to acquire some of the actual vehicles upon which the diecast models have been based, such as the 50th Anniversary, the Automobile Association 80in, the 107in Recovery Truck and the Irish 86in Fire Engine.” 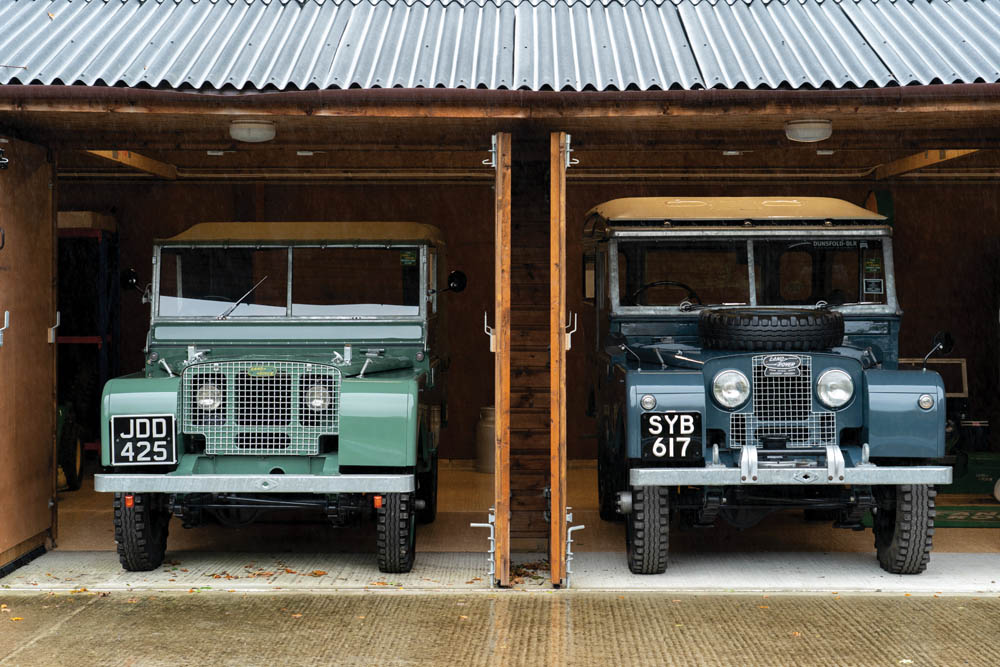 After buying the Defender 50th, it would be another seven years before Nick could add a second vehicle to his collection. It was a Series I 86in station wagon known as ‘Sybil’ that will be familiar to LRM readers of a certain age, having been enthusiastically off-roaded and written about over many years by long-term owner David Bowyer. I should also confess to holding Sybil in high regard myself, having bought it from David in 1992. Coincidentally, it was also the second Land Rover in my own collection alongside my 1990 Range Rover which was known as ‘Syd’, and I got a lot of stick and robust mickey-taking for owning vehicles nicknamed Sybil and Syd! I kept the Series I for several years and enjoyed many off-road adventures in it, before finally selling it back to David in 1998.

“I had admired Sybil for years,” says Nick. “It appeared regularly in the Land Rover magazines at that time, and I particularly remember the article where it was driven off-road to the Billing Show via one of David Bowyer’s famous three-day Secret Wales greenlaning expeditions.

“When David once again offered Sybil for sale I wasn’t in a position to buy it, and it was bought by a Series One Club member in Weymouth. In 2005 he in turn offered it for sale and by then we had the wherewithal to acquire it, although by then it was getting pretty tired.

“I decided to get it recommissioned to the original factory specification and started to investigate the market to decide who I wanted to entrust with the job. That was when my long association with Philip Bashall and his wonderful team at Dunsfold DLR began, and DLR have restored several of my vehicles over the years.

“I was very saddened when I heard recently that DLR had closed and it really felt like the end of an era, but I’m delighted that Philip plans to dedicate more of his time to the Dunsfold Collection. It’s a charity that is close to my heart and a cause that I think every Land Rover enthusiast should support. 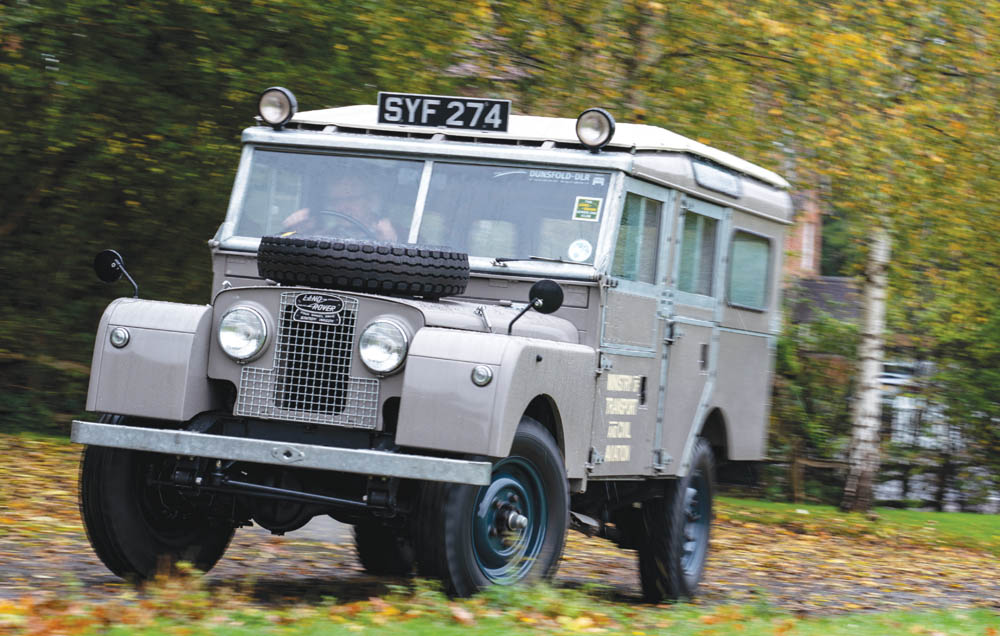 “One consequence of acquiring Sybil was the start of a tradition that continues to this day of naming vehicles in the collection after characters in the Fawlty Towers TV sitcom, so it was no surprise that the third vehicle to join was immediately christened ‘Basil’!

“It was a Series I 107in station wagon that I’d been tipped off about that was languishing in a garden near St Austell in Cornwall. I decided to go down to have a look at it. On the way, I stopped for a coffee and was thumbing my way through the latest edition of the Land Rover Series One Club’s Legend magazine, and there was a story about the two Series I snow-blowers developed by Land Rover for airport runway duties.

“When I got to St Austell, I was amazed to discover that the vehicle I was looking at appeared to be one of the snow-blowers that were pictured in Legend! I immediately called Philip while I was crawling all over the vehicle, and he confirmed that it was one of the snow-blowers. A deal was quickly agreed, and Basil joined the collection. The 107 was also the subject of a full restoration at DLR. 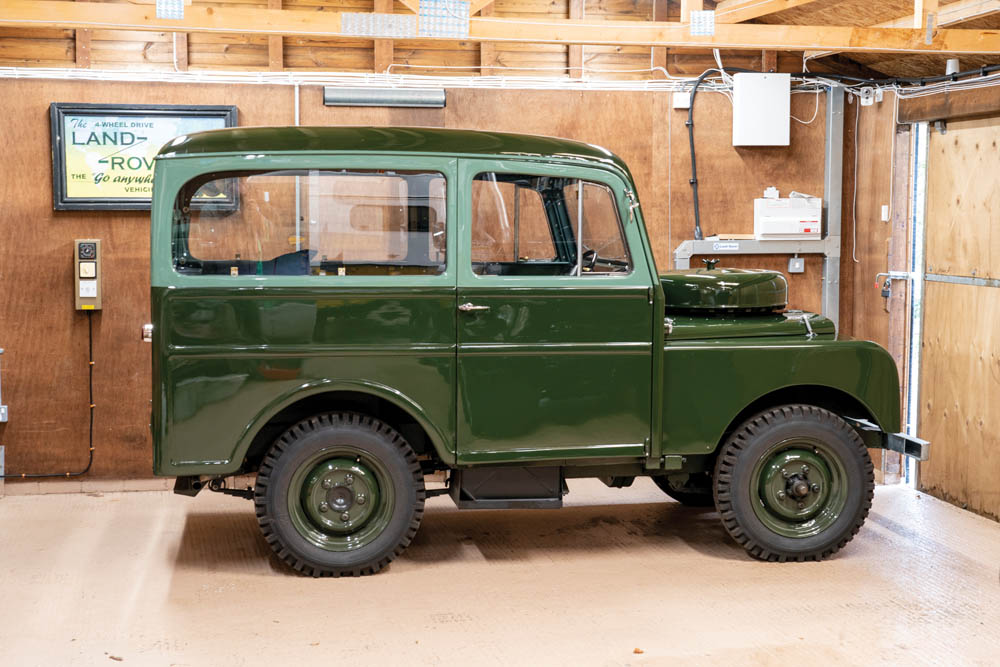 “Another very interesting vehicle that I couldn’t afford to buy when it was first offered to me was the Series I Tickford, which Philip Bashall recovered from a Scottish estate in 2003. At that time, Lyn and I were struggling with our mortgage payments and buying another Land Rover wasn’t feasible, and the vehicle ended up at Stavanger in Norway as part of the huge collection of 130 Land Rovers put together by a guy called Ketil Oftedahl. Unfortunately, Mr Oftedahl later found himself in some difficulty with the local authorities in Stavanger and was forced to dispose of the entire collection at short notice.

“The affair was the subject of huge interest at the time, both in the national press and among Land Rover enthusiasts across the world. Some of the rarer and more interesting vehicles were brought back to the UK and the Tickford was one of a number auctioned by John Craddock and Exmoor Trim’s Julian Gostling. It was in terrible condition but I decided I just had to bid to ensure it was rescued. Once again, the restoration was done by DLR, with Julian taking a special interest in the interior work.” 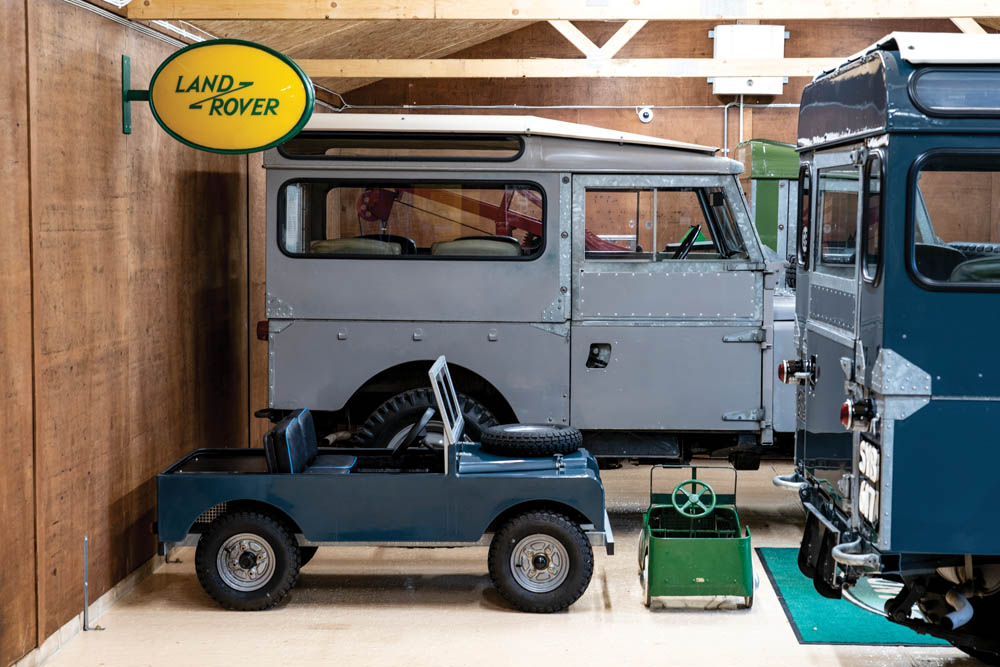 Collection includes this battery-powered miniature (for the grandchildren, of course!)

Nick’s collection now stands at 15 vehicles, and the majority remain true to his love of station wagons, ranging from the 1949 Tickford to a 2016 Defender 110 Heritage that was built in the final weeks of production.

There has been a bit of diversification, though, and the collection also embraces a pair of 1949 80s and a Defender 60th Anniversary SVX, as well as the beautiful Series I 86in Fire Engine, the glorious 107in Recovery Truck which is fitted out with a spectacular array of period accessories, and the 80in Automobile Association hard top which is currently undergoing a full restoration.

The majority have been restored, either by DLR or Nick’s great friend Robert Sargeant in Yorkshire, and one of the 1949 80s was restored by the late Ken Wheelwright, but there are several that remain completely original. 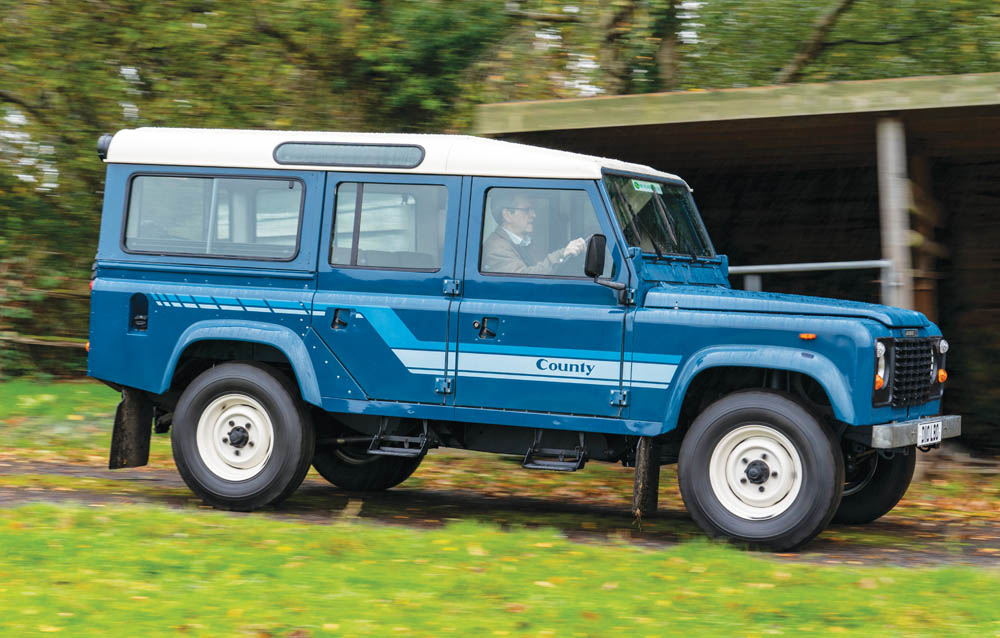 Nick prefers originality and patina but not, he says, once ‘patina’ has become ‘tatina’! Whatever their condition, every vehicle in the collection is on the button and ready to go, and each of them is driven regularly.

“Individually I use them in relays between the house and the farm, and collectively I and a group of friends host regular driving weekends when we rotate whichever collection we are using for two consecutive days of driving. It is immense fun seeing a clutch of your own vehicles out in the lanes all at the same time, and it’s great to drive a friend’s vehicles, while keeping them all nicely exercised. The only time I do not take them out is when the roads are covered in salt,” he says.

“They are all Land Rovers but as anyone who has driven the various models from 1949 to 2016 will know, they each have their quirks and idiosyncrasies, and for me that is part of the charm and the pleasure of driving them.” 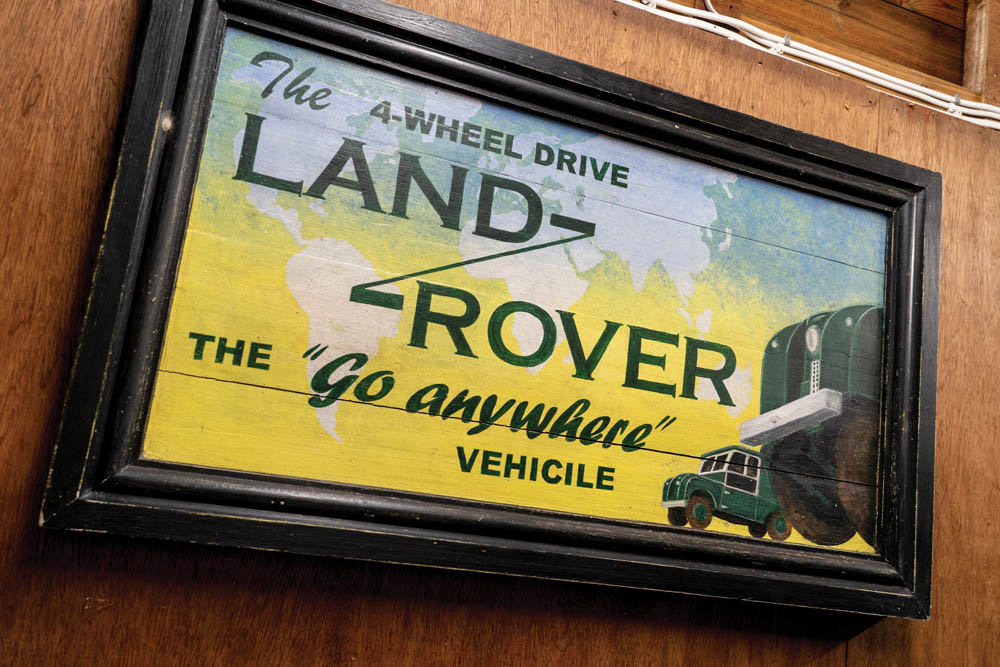 Alongside his vehicle collection, Nick also has some lovely Land Rover memorabilia

Nick is also a very keen historian and spends a lot of time seeking out period photographs of the vehicles in his collection. He also makes a point of contacting as many previous owners as he can and maintains impeccable files on all the vehicles. He does what he calls his own ‘soft servicing and maintenance’ but any bigger jobs are left to Robert Sargeant, who regularly drives down from Yorkshire to work on the collection.

“I think the most important thing that defines why I get so much pleasure from the collection is without doubt the really nice people I have met and now count as great friends, who share in the interest. I am continually learning from many who are experts in their field, both from a history point of view and from an engineering perspective.

“My pre-Covid social life, day to day, at weekends and for holidays, is now defined by these great friendships, both in the UK, across mainland Europe and beyond. Lovely folk who share a passion and care about people and Land Rovers. I’m really looking forward to that lifestyle resuming in 2021!”