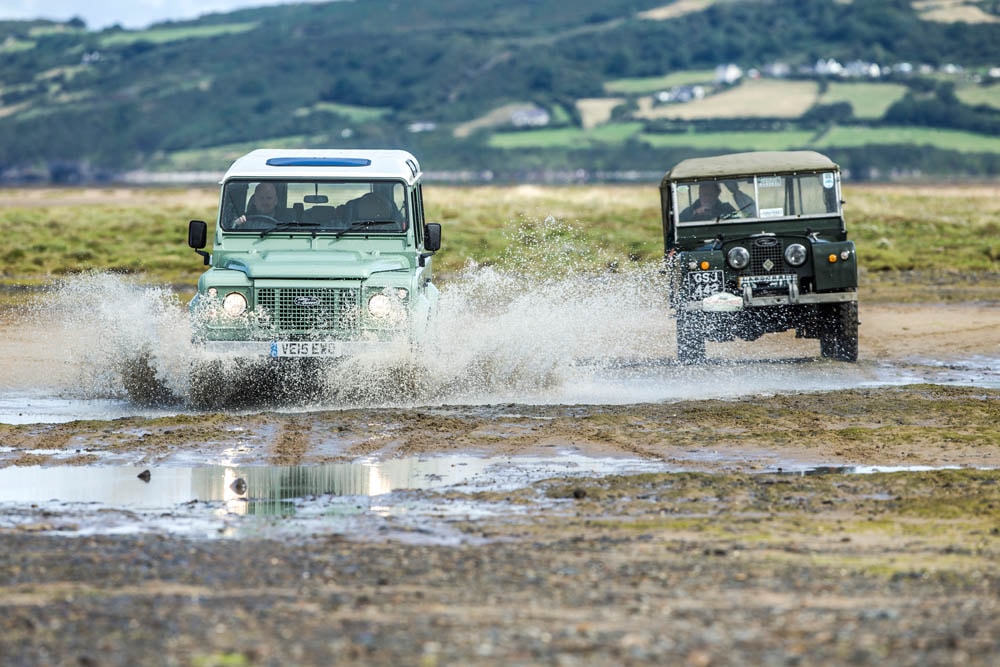 As Land Rover enthusiasts, we take an avid interest in where we have come from and where we are going. My love of Land Rovers began in 2003 when I attended the African leg of the inaugural Land Rover G4 Challenge. For a week I cruised along South Africa’s Garden Route in a bright orange G4 Defender, observing as competitors from all around the world battled it out for glory. I was hooked and not long after this I bought my first Land Rover, a Defender 90, of course.

This was followed by an insatiable thirst for Land Rover knowledge. I read several books such as Born in Lode Lane by Roger Crathorne and First Overland by Tim Slessor and I religiously attended various Land Rover shows, but there was still something missing. I felt this urgent need to go back to where it all began, in Red Wharf Bay, Anglesey. Something rather significant happened there during the Easter weekend of 1947. Whilst on holiday there, the then Rover technical director Maurice Wilks, sketched in the sands of the bay what he thought the company’s new utility 4x4 should look like. At the time he was driving a pretty battered army surplus Willys Jeep and it’s fair to say that this definitely influenced that now-legendary sketch in the sand.

The company needed something to improve post-war sales and this sketch was going to be it: a simple, inexpensive, go-anywhere working vehicle aimed at the local and global markets. Incredibly this was only supposed to be a stop-gap measure for the company. We all know what happened next, a legend was born and today the company continues to go from strength to strength.

Paying respects to a legend

Now that they have stopped producing Defenders at Solihull, I decide to at last get myself down to Red Wharf Bay. I need to pay my respects to the visionary Maurice Wilks. I know that I’m not the first Land Rover fan to do this and I certainly won’t be the last. 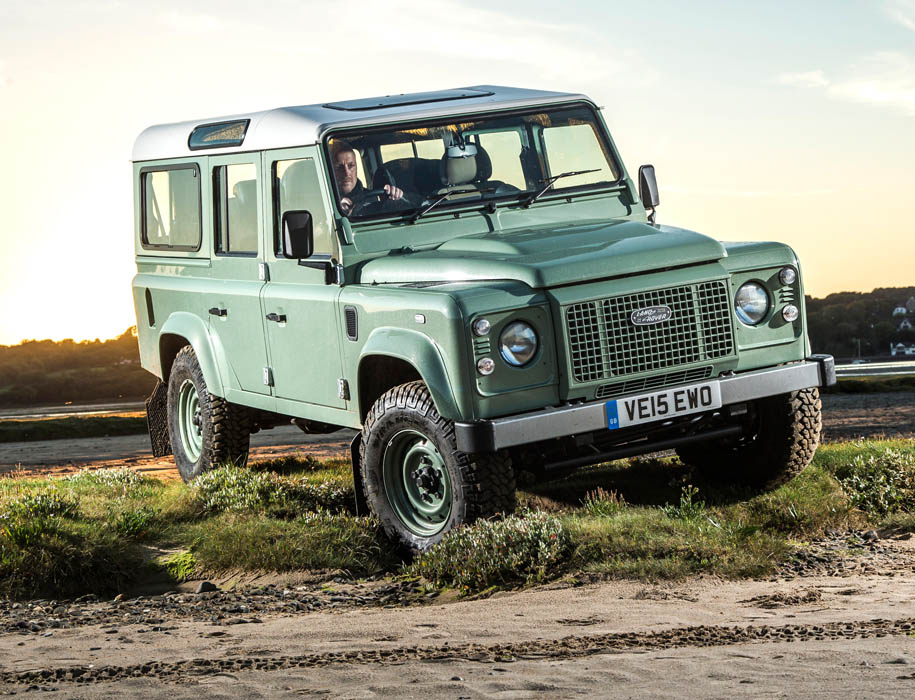 Pat drives across the sands of Red Wharf Bay in a Heritage Edition 110.

I need decent wheels for the trip and Land Rover UK have kindly loaned me one of the trio of final Limited Edition Defender models. These very special (and expensive) Defenders were launched in 2015 to mark the last year of Defender production. Part of the launch event involved drawing a giant one-kilometre-wide Defender in the sand at Red Wharf Bay. This was done using the three new Limited Edition models with some help from a few older models. The fact that my 110 for the trip was Grasmere Green, with a heritage grille and HUE166 graphics, made it the perfect choice for my road trip down Land Rover memory lane. 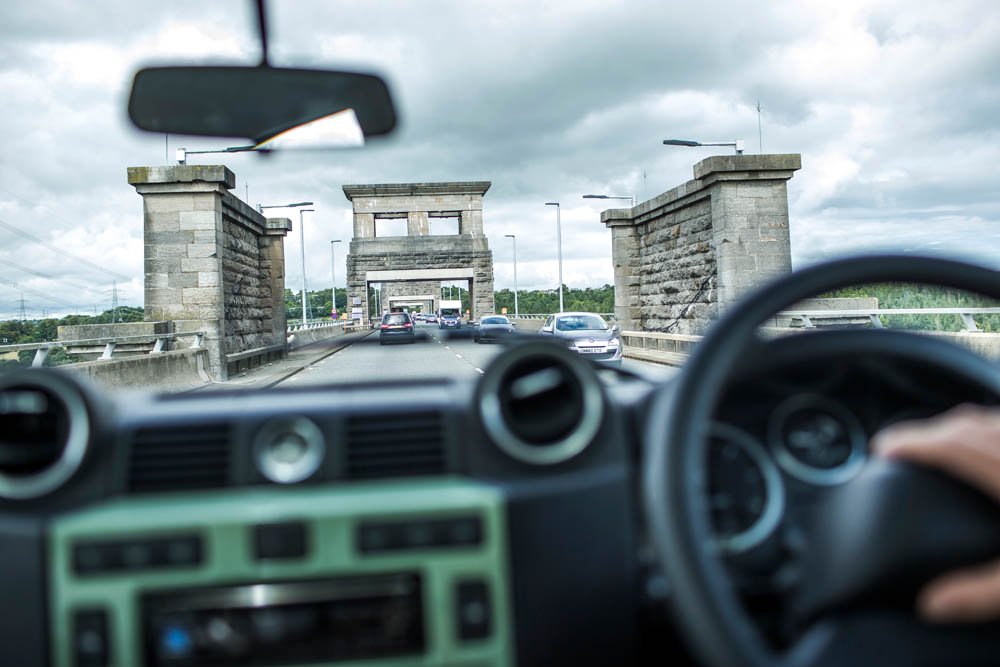 Pat crosses the bridge to Anglesey

The 276 square mile isle of Anglesey is not only the biggest island in Wales, it’s also bigger than any island in England. The fact that most of the island’s coastline has been designated an Area of Outstanding Natural Beauty probably explains why the Wilks family had a holiday home here. I’ve arranged to meet David Mitchell from Landcraft 4x4 on the Red Wharf Bay beach. The one thing I learnt from a decade of remote travel in Africa is that you must use a local guide whenever possible as it will save you heaps of time. 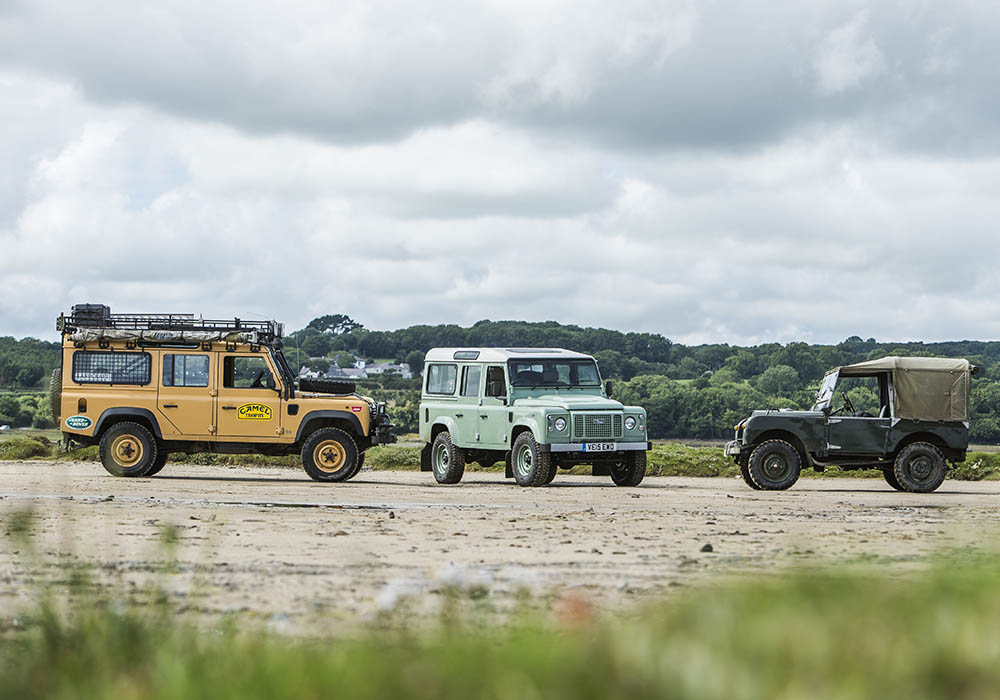 David is already on the beach when we arrive at the predetermined time. He is in his 1998 Camel Trophy 110, the year when the competitors used Freelanders (his particular Defender was used as a support vehicle for the Russian team). There is a trailer hitched to it, on which sits  his 1952 Series I 80in. He has owned it for over three decades and it has never been restored though Dave did give it a lick of paint in 2008 to smarten it up.

This is Dave’s tenth visit to Anglesey for the year; three of these were for photoshoots and TV crews while one visit was with the Land Rover Series One Club. During that little adventure they had 37 Series Is on the beach.

Dave’s blood is Land Rover green and he has never owned anything but a Landy. When we stop next to him he takes out his Ordnance Survey map and on it he has marked 50 Land Rover places of interest in Anglesey. These include where Land Rover products, such as the Defender SVX and Freelander, were launched. Others relate to the Wilks family and these are the ones that I am most interested in. 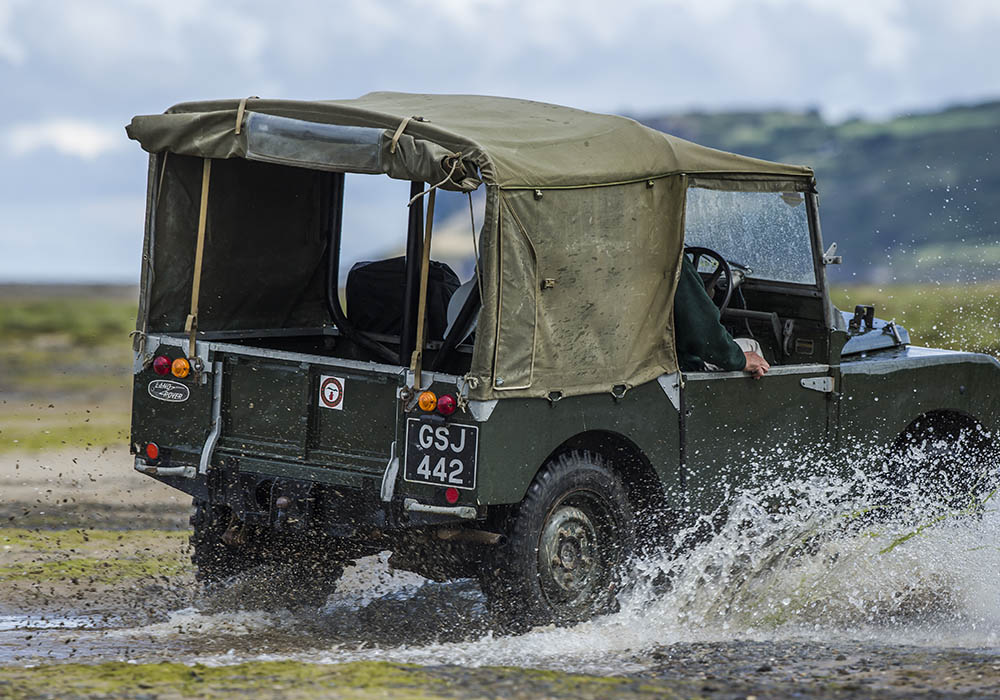 Series I in action

Once we have the Series I off the trailer we head off on a beach convoy drive just as Maurice would’ve done. Though the tide is low there are pools of water everywhere. Dave drives his Series I like he stole it. I admire that because that is probably what Maurice would’ve done. As he powers through one particularly bumpy section the driver’s door flies open as the lever makes a getaway. “Not to worry. When we are done I will go to the nearby Conwy Land Rover dealership and get another one. This Land Rover is still under warranty,” laughs David.

The highlights of Anglesey 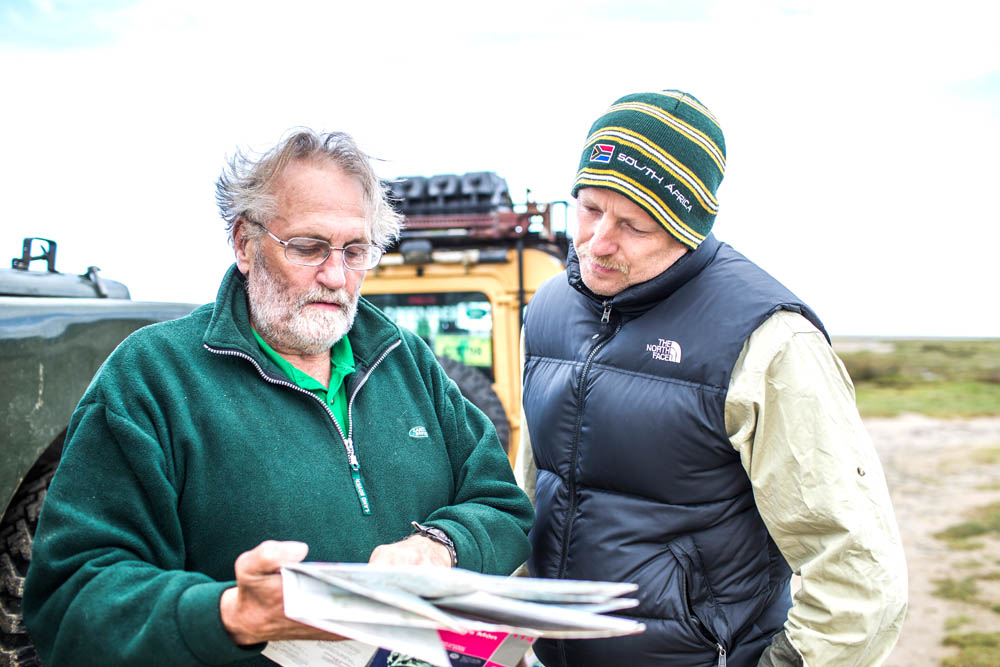 Having bagged a few photos, we get the map out again. Strangers notice our Land Rovers and come over to have a chat. Kirsty Farrell from the Moelfre Coastguard tells us how a club lost a Defender 110 here over the weekend. “They tried to drive from the eastern side of the bay to the Ship Inn. It’s impossible to do, even in a Land Rover, as the boggy bit in the centre will stop you in your tracks. The tide came in and covered their entire Defender with  salt water. A tractor was used to recover it once the tide went out. They won’t forget Red Wharf Bay in a hurry.” That’s another reason I’m glad we have David with us, because the beach all looks the same from here.

I ask David to point out which places we should visit on the map. The Wilks family used to own a farm called Tros yr Afon in Dwyran, which David point out to me as an option, but in the end we decide to give it a miss because the new owner might not like Land Rovers. 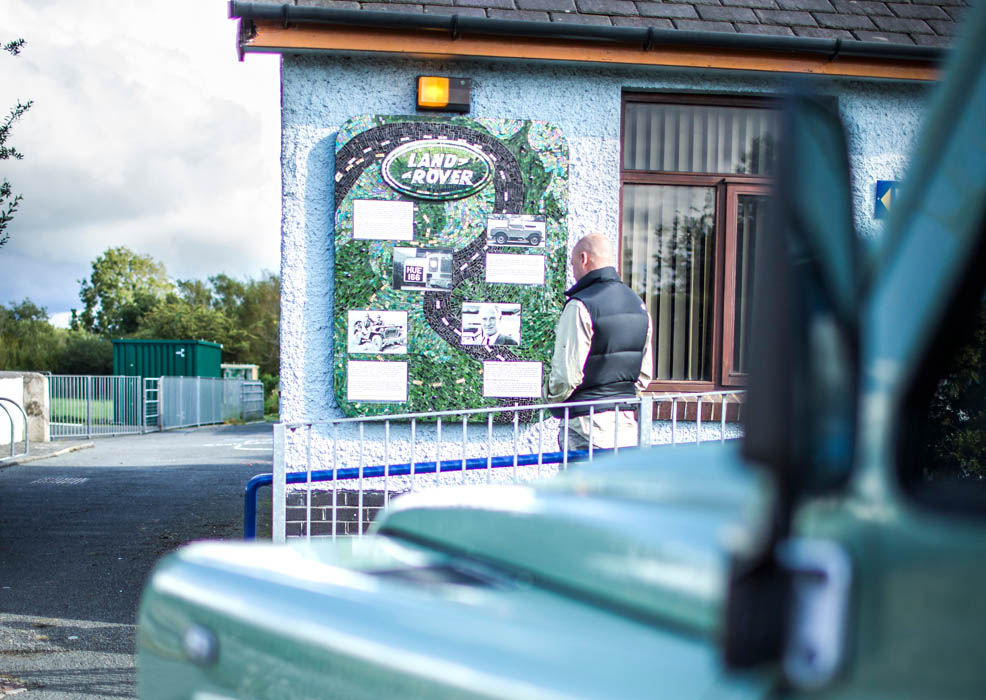 We decide instead to head to the school in Dwyran where Martin Peach, a former Land Rover designer, made and installed a special commemorative mosaic plaque. The thousands of tiny tiles tell the early story of Land Rover and the significant role played by the Wilks brothers and the surrounding area. One section of the panel reads: “The Land Rover (referring to HUE 166) was a huge success and the Rover company started to build them. By today thousands and thousands of Land Rovers have been made and sold all over the world.” A few years ago they produced the two millionth Series Land Rover and Defender, so it would be fair to say that they might have to change that section of the panel to millions and millions. This fitting tribute came about after the headmaster asked a local historian if anybody famous came from the area around the school, and to me, they don’t come any bigger than the creator of Land Rover. 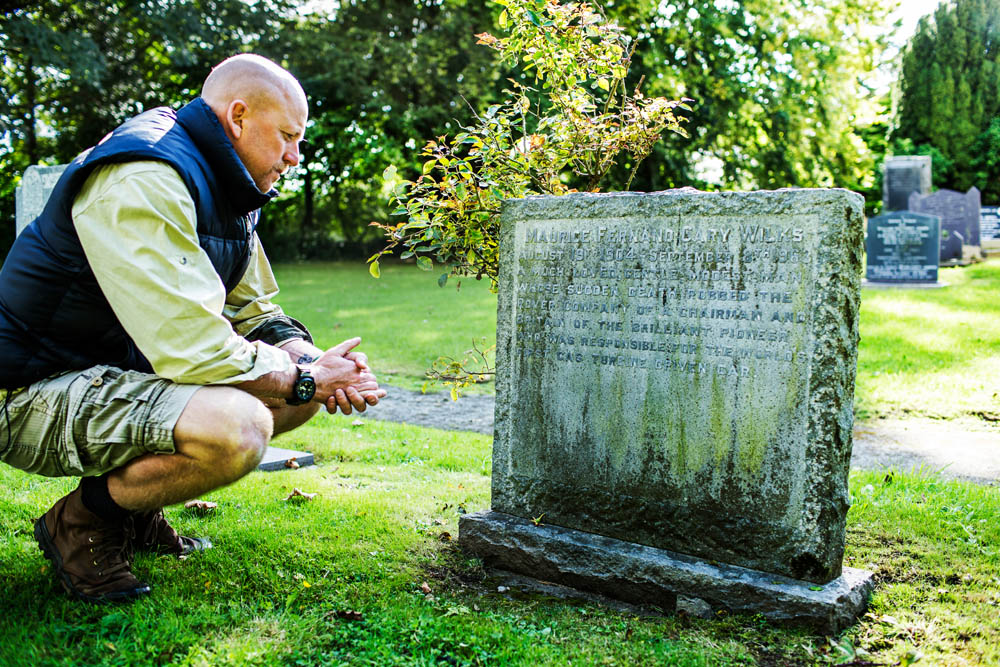 Maurice Wilks’ headstone... If only he knew what he’d started

From here we head to Newborough, where Maurice is buried in an old churchyard. It’s a simple grave with a regular headstone but the thing that I find most surprising is that there is no mention of Land Rover on the headstone. Looking back, it does make sense as Maurice died in 1964 and no one back then knew what Land Rover would grow into. It has to be one of the most incredible motoring stories of all time.

What they do say on his headstone is the following: “A much loved, gentle, modest man whose sudden death robbed the Rover company of a chairman and Britain of the brilliant pioneer who was responsible for the world’s first gas turbine driven car.” I quietly thank Maurice for creating the Land Rover and sit there for a few minutes, in the presence of one of my heroes.

In days gone by one could just head to Stepping Stones from here and make your way down onto the beach in your 4x4, just as the Wilks brothers did. This is no longer the case, but I decide that we need to visit Red Wharf Bay one more time before we leave Anglesey and so we go there to watch the sunset. It is more like a fireworks display as the sky turns various shades of red and then pink. What a perfect way to end a great day.

Our adventure is not yet over. The next morning we take the tar road to Solihull. I was here on January 29, 2016 when the last Defender rolled off the production floor.  What a crazy day that was. Hundreds of journalists and people of importance were all given exclusive access to the production line where we could literally walk next to the final 20 Defenders as they received their final touches. It was a pretty emotional affair.

Solihull is a living and breathing Land Rover history book. It’s also  the final stop on our journey of discovering as much as we can about Land Rover’s interesting past. I park the Heritage 110 at the Solihull Land Rover Experience where instructor Mike Smith is ready to take us around some of the famous off-road tracks. The place is buzzing with Land Rover enthusiasts from all over the world who had either just been or were about to go on said tour. 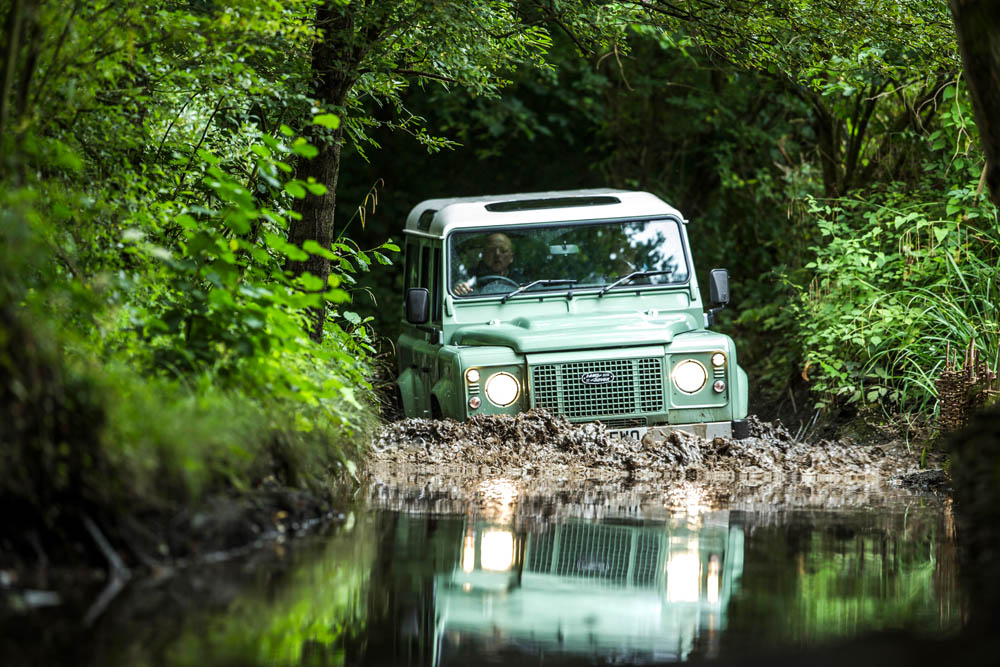 The trip wouldn’t be complete without visiting Solihull’s tracks

Before heading out onto the tracks we take a walk along the original test track that runs above some old Second World War bunkers. I have no doubt Maurice took the odd drive or two along it. Today the track is pretty overgrown and not in use any more. Still it is an important part of Land Rover history and I’m glad that I have taken the time and trouble to come and see it. I have probably driven along the Solihull Land Rover Experience 4x4 tracks about a dozen times and will never tire of coming here. The history and setting are all contributing factors, of course. The long water crossings of the Jungle Track prove to be no match for our Heritage Defender; it just takes it all in its highly-capable stride. Nothing like a bit of traction control to help you along, if and when needed. 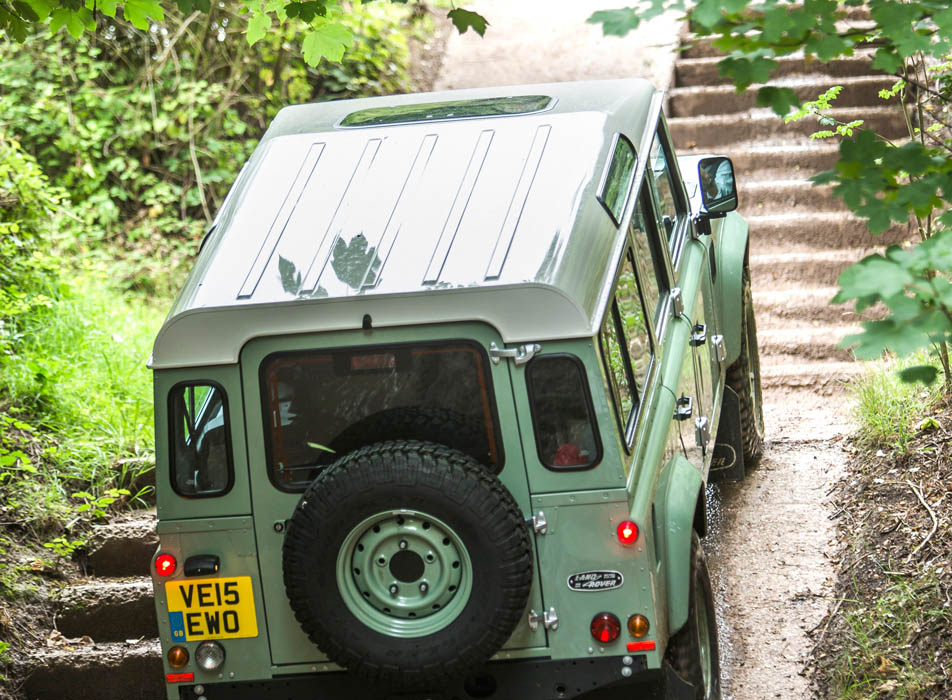 Land Rover Experience Solihull prove to be no match for 110

After about 90 minutes Tom decides to call time for the session and so we return to where we started. Our tribute trip to Maurice is over. I’m sure that after reading this feature a few of you will start to make plans to follow in our tracks. All I ask is that you do so in a respectful and befitting manner. It’s the least you can do for the Wilks family as you say thanks to them for creating such legendary vehicles. 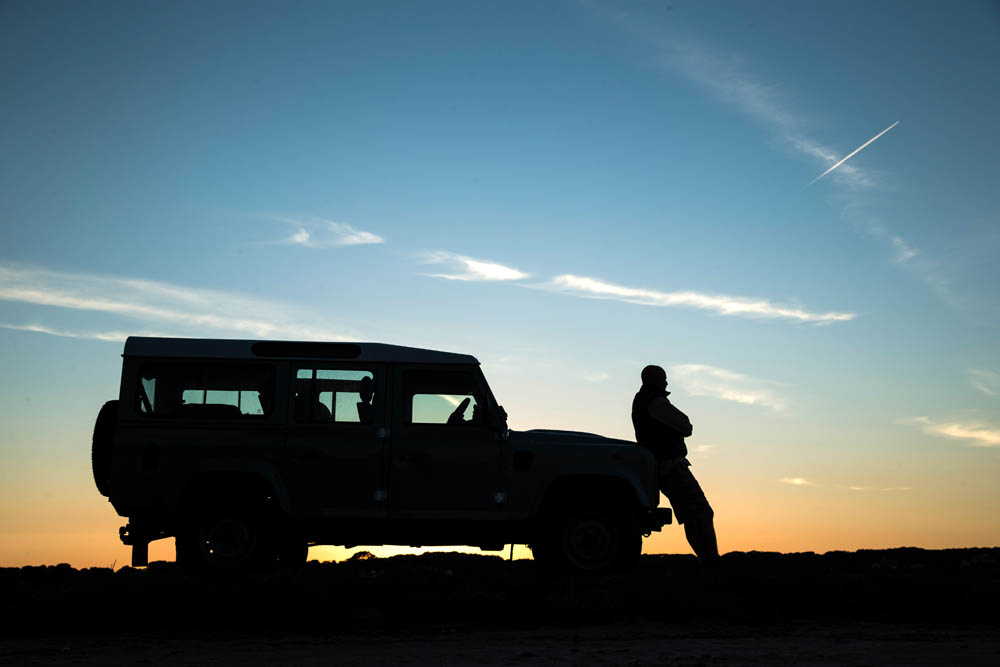 Sunset in Anglesey... Things don’t get much better than this

Conveniently located family-run site. We camped in tents on the lovely grass sites. The staff were helpful and the facilities clean and plentiful. For more details see kingsbridgecaravanpark.co.uk.