Terry O’Sullivan’s 1994 Discovery has already covered over 325,000 miles, and now it’s back on the road he’s determined to see half a million miles on the clock

If you’re a vintage hi-fi and vinyl enthusiast, the chances are you’ll have heard of Loricraft. And if you think the Garrard was one of the best transcription motors ever made, you’ll definitely know about Loricraft’s founder, Terry O’Sullivan. But you might not know that Terry and his wife, Lorraine, are dedicated Land Rover enthusiasts. If you’re not into hi-fi, suffice to say that Garrard of Swindon designed and built beautifully-engineered turntables that were used by the BBC and almost every commercial radio station back in the day. They are highly prized by enthusiasts.

“I’ve always loved Garrards and I founded Loricraft Audio in 1991,” Terry tells me, his passion and enthusiasm obvious to see. “The Garrard factory closed down in 1992 leaving owners of their turntables without any servicing or spares support, and Loricraft became an authorised service agent. In 1997 I successfully acquired a full licence to use the Garrard trademark and I developed a brand-new turntable which we called the Garrard 501. Although we’d been attending UK hi-fi events and shows, we now wanted to promote our products and services internationally, and the obvious place to go was the High End show in Germany, which continues today and is probably the world’s premier hi-fi event.” 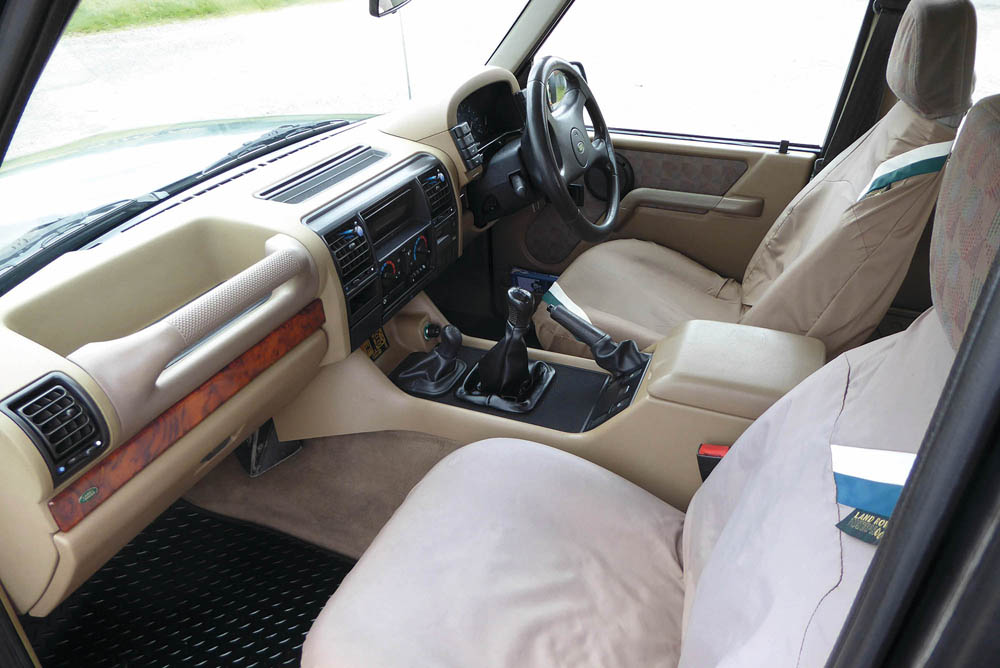 Now I have to confess that I am the proud owner of a Garrard turntable dating from the late 1950s, which is how I came to meet Terry, but we’re here to talk about his Discovery. There’s no stopping Terry when he’s telling you a story, though. In fact, he’s telling me several stories all at the same time and I’m struggling to keep up, but his excitement is infectious. “I booked an exhibition room at High End 1998, which was going to be held in Frankfurt, without really thinking about how I’d get all the show equipment there. I thought I would hire a van but my father, Leo, who was helping me with the business, thought this was a daft idea and told me to get a Land Rover that could tow a trailer. My engineer, Nigel, agreed and he suggested a Discovery would be the ideal vehicle – more comfortable than a Defender and not as upmarket as a Range Rover. Nigel thought the Discovery was classless and would create the right image for the business, so I started to look for one.

“I went to a few of the main dealers and then a neighbour told me about a friend of his who was selling a Discovery. I met the owner, who was a water officer for the Berkshire Fire Brigade, and one look at the immaculate vehicle told me that he was a perfectionist! He had bought it new from Lancasters in Pangbourne and it was first registered on 14 April, 1994. It was one of the first 300Tdi versions off the line and had a full main dealer history and 24,000 miles on the clock.”

Did you know that you can now get access to the entire archive of Land Rover Monthly magazine content with our brand new digital archive? You can enjoy all the issues since the May 2015 till the current one on sale – use the search bar below to find features, reviews and other great content:

“The Discovery was my first Land Rover and I was smitten! I’d had a string of pretty boring company cars going back to 1966, and before then I had a 1937 Austin 10, an Austin 12 and a Ford V8 pilot, all of which took us to Germany on several occasions. My father was dedicated to his trusty Montego Countryman and before I bought the Discovery my car was a Maestro, but after my first drive in the Discovery it was going to be Land Rovers from now on. Lorraine bought a Td5 in 2001 which she loved. She only parted with it in July 2018 when we sold the Loricraft business and retired, but she replaced the Td5 with a Defender Heritage limited edition and at the same time I bought a Discovery Sport.” 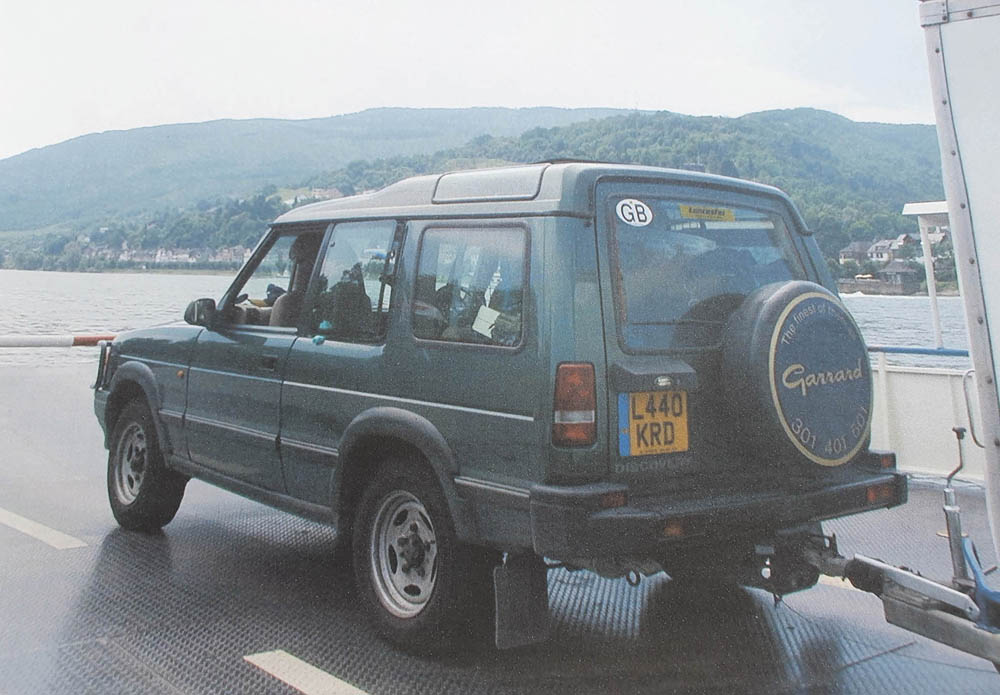 But rewind back to 1998, and Terry had to move fast if his new acquisition was going to be ready for the long drive to Frankfurt. “I bought four new tyres, a tow bar and a set of waterproof seat covers, and hired a four-wheel covered trailer. Then we had to rush around collecting parts and equipment from all over the place, but we were just about ready in time. And then the brakes jammed on the trailer and the car alarm started playing up, meaning a last-minute dash to Hartwells for repairs. We were finally on our way with four of us in the Discovery and a fully-loaded trailer behind, and the journey was a delight.

“The Discovery became my daily driver and our tow vehicle. We made the journey to the High End show every year for the next ten years or so, initially to Frankfurt but then to Munich when the show moved there. We also made frequent visits to Germany to meet customers and equipment suppliers. Plus we had all our UK events and customers to look after, so the miles soon racked-up.

“We’d also go down to Dartmoor regularly. Lorraine had a hobby called Dartmoor Letterboxing. The idea is that you walk across the moors to find the letterbox, which is a hidden container of some sort. There are literally hundreds of them scattered across the moors. When you find one you add your personal rubber stamp or some other indication as proof of your visit.”

This is very interesting, I tell Terry, but what about the Discovery? “Lorraine was a teacher and she’d go down to Dartmoor for extended summer visits and stay in her camper van,” he continues, without missing a beat. “I’d go down to join her for weekends and short breaks while she was there, and I’d always take the Discovery. It was on one of these visits in 2013 that the accident happened.

“I was following Lorraine in her Td5 when a car overtook me and pulled in between us, braking sharply. We collided and, to make matters worse, a following car ran into the
back of me. The Discovery was recovered and taken to a local Land Rover specialist, James Tennant in Okehampton, whom I’d met a few years before and who’d been looking after the Discovery. I can remember James doing his first service on it at 172,000 miles and asking me when the clutch had last been replaced and being amazed when I told him that it was the original. Anyway, James gave it the once over and told me that he thought I’d totalled it, but I asked him to see what he could do. After three days and £268 James had straightened it out to the point that it was driveable and legal. The insurance company sold it back to me and I continued to use it for another year or so until it failed its MoT and the guys at the test station told me I should scrap it.” 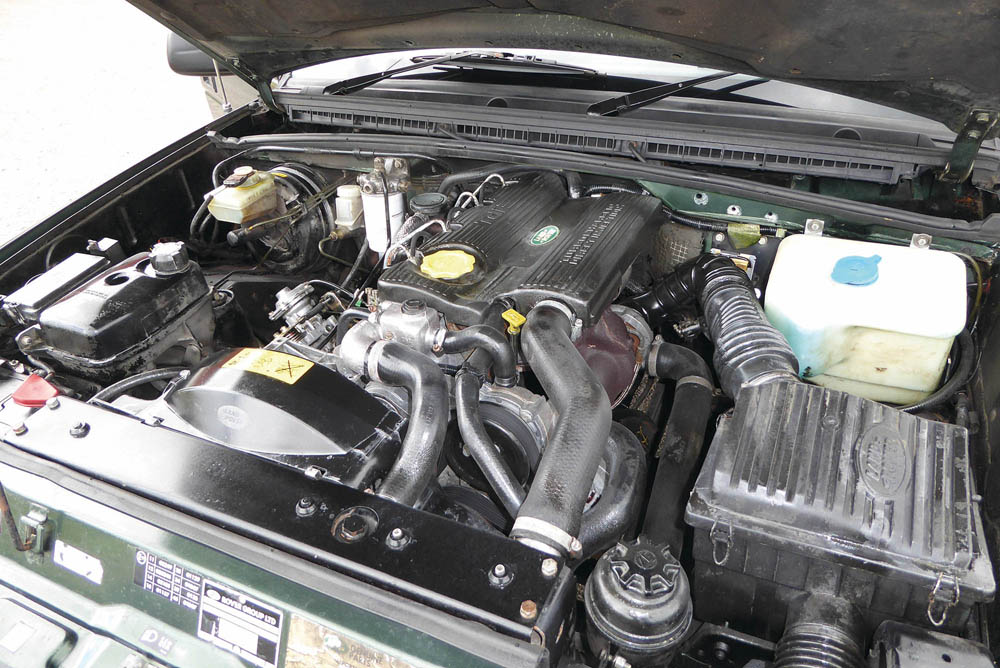 But Terry didn’t scrap it. With around 325,000 miles on the clock, over 300,000 of which were his own, Terry couldn’t bear the idea of losing it. So the Discovery was parked up behind his business workshop on a farm in Wiltshire, and that’s where I saw it for the first time in 2015. Terry’s commitment to it was impressive and he told me when I first met him that one day he would have it back on the road. I didn’t have the heart to tell him what I thought a Discovery would look like after it had spent a few years parked outside with grass and weeds halfway up the body side, and privately I doubted it would ever turn a wheel again. I’m delighted to say that Terry proved me wrong!

“When we sold Loricraft the Discovery needed to be moved,” says Terry. “The choice was again either to scrap it or get it going again. Next door to the farm is a garage that specialises in Land Rovers and other 4x4s and I asked them to have a look at it. They told me to scrap it! Well, I decided to get a second opinion and contacted Bryn Jones at PJ Fabrications in Lambourn. Bryn is highly regarded locally and as well as working on Land Rovers he is well known for making horseboxes and repairing agricultural machinery. 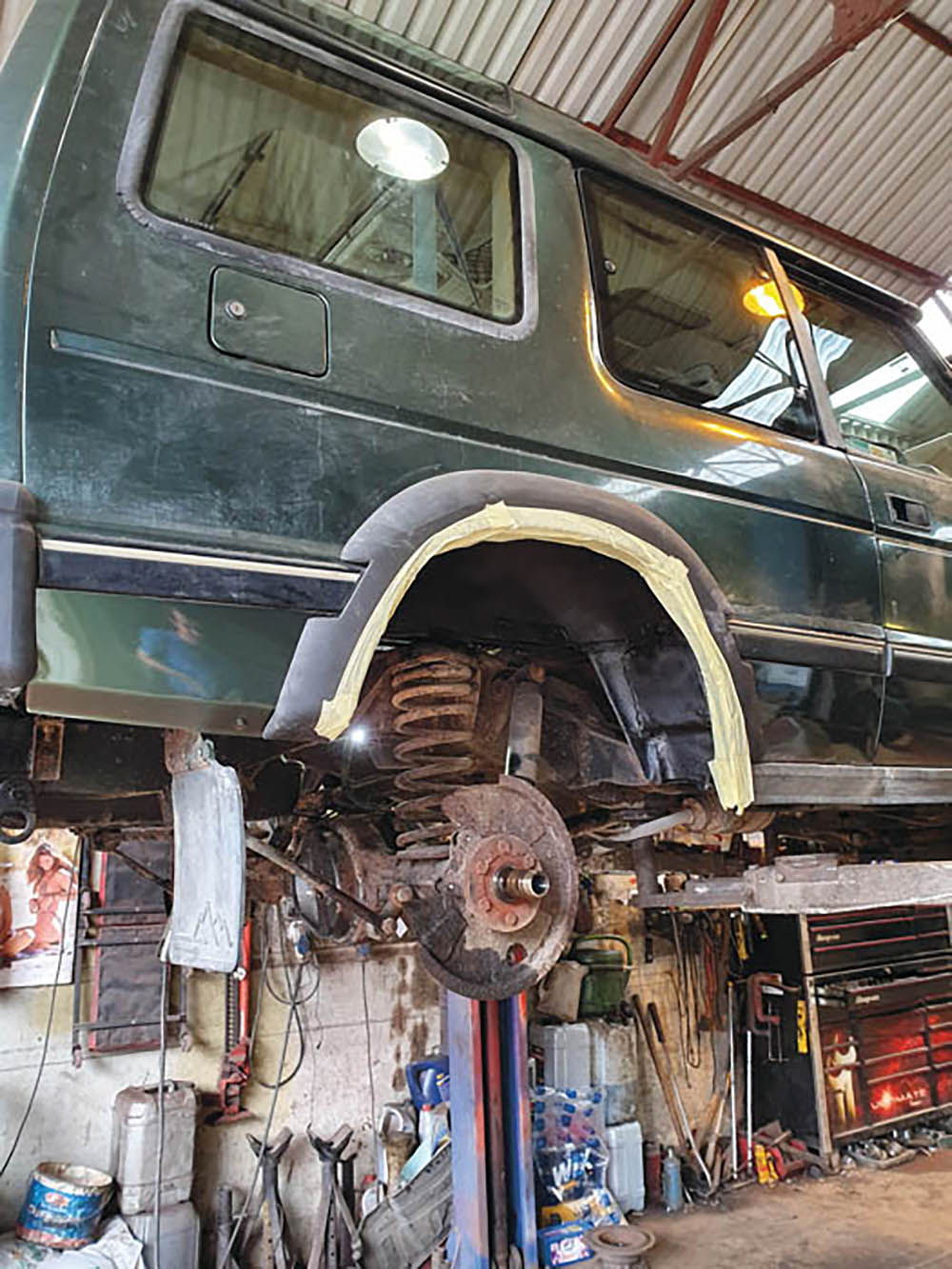 Bryn Jones gets to grips with the brakes

“Bryn came to look at the Discovery and it started at the third attempt! I knew then that I couldn’t allow it to be scrapped. Bryn drove it to his workshops to carry out a detailed examination, and I gave the go-ahead for the work to start. I didn’t want anything like a concours restoration, I just wanted my old Discovery back on the road. I knew the rear crossmember would need to be replaced, and there were several areas on the chassis that needed welding. I wanted to keep the original paint and just replaced and repainted the accident-damaged panels and tailgate. 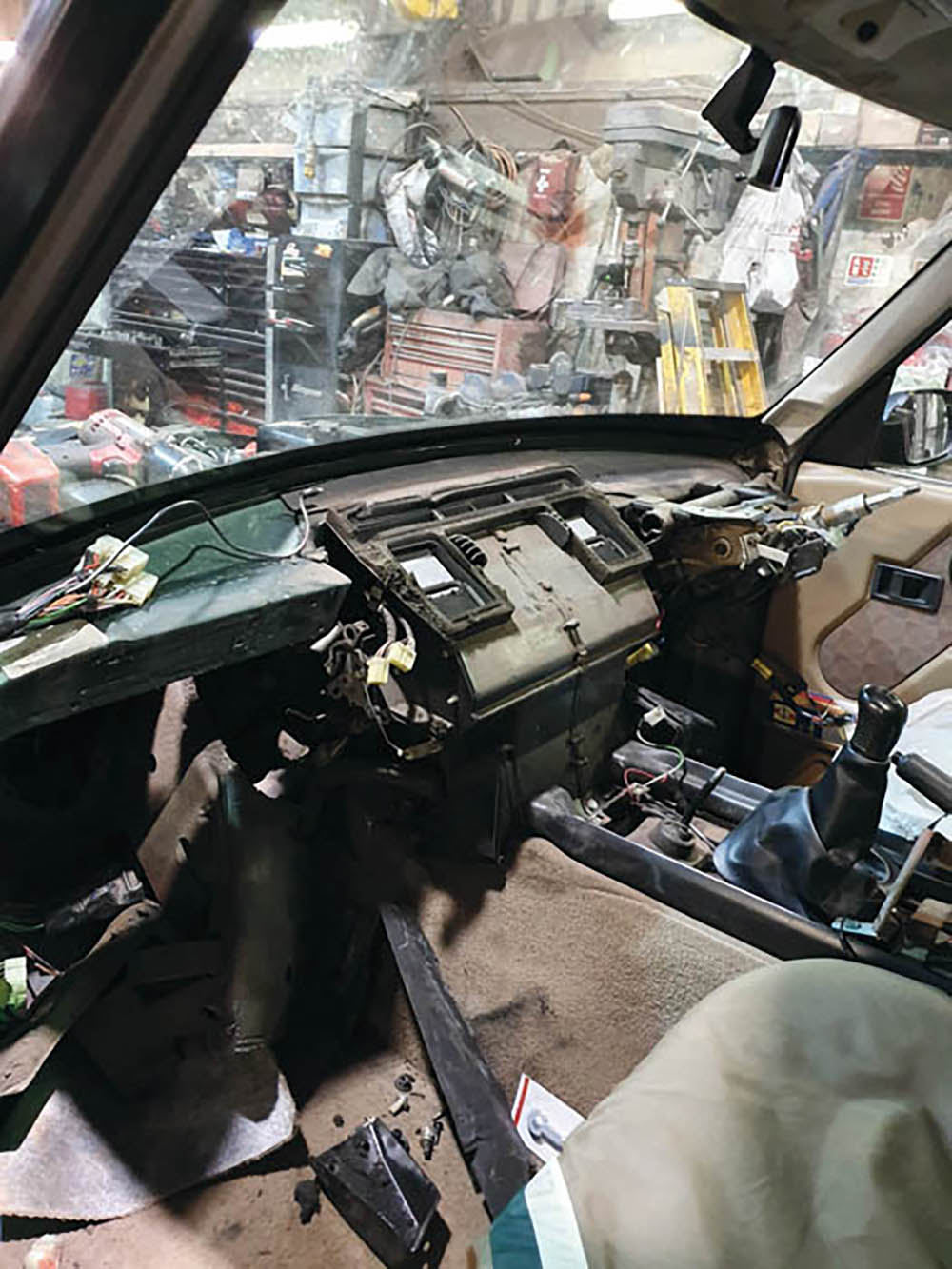 Dash had to come out to deal with corrosion and leaks

“It needed a nearside inner wing, rear floor, new door skins, offside inner and outer sills, scuttle repairs, new brake discs, back plates and brake pipes, bumpers and a front exhaust. The biggest challenge was finding a rear wing panel to replace the one crumpled in the accident. We finally found one in Nottingham that came off a G-WAC. In September last year it passed its MoT with no advisories. There’s still some snagging and fettling to do which has been delayed by the lockdown, but the important thing is she’s back on the road and I’ve enjoyed reacquainting myself with the delights of the 300Tdi.” 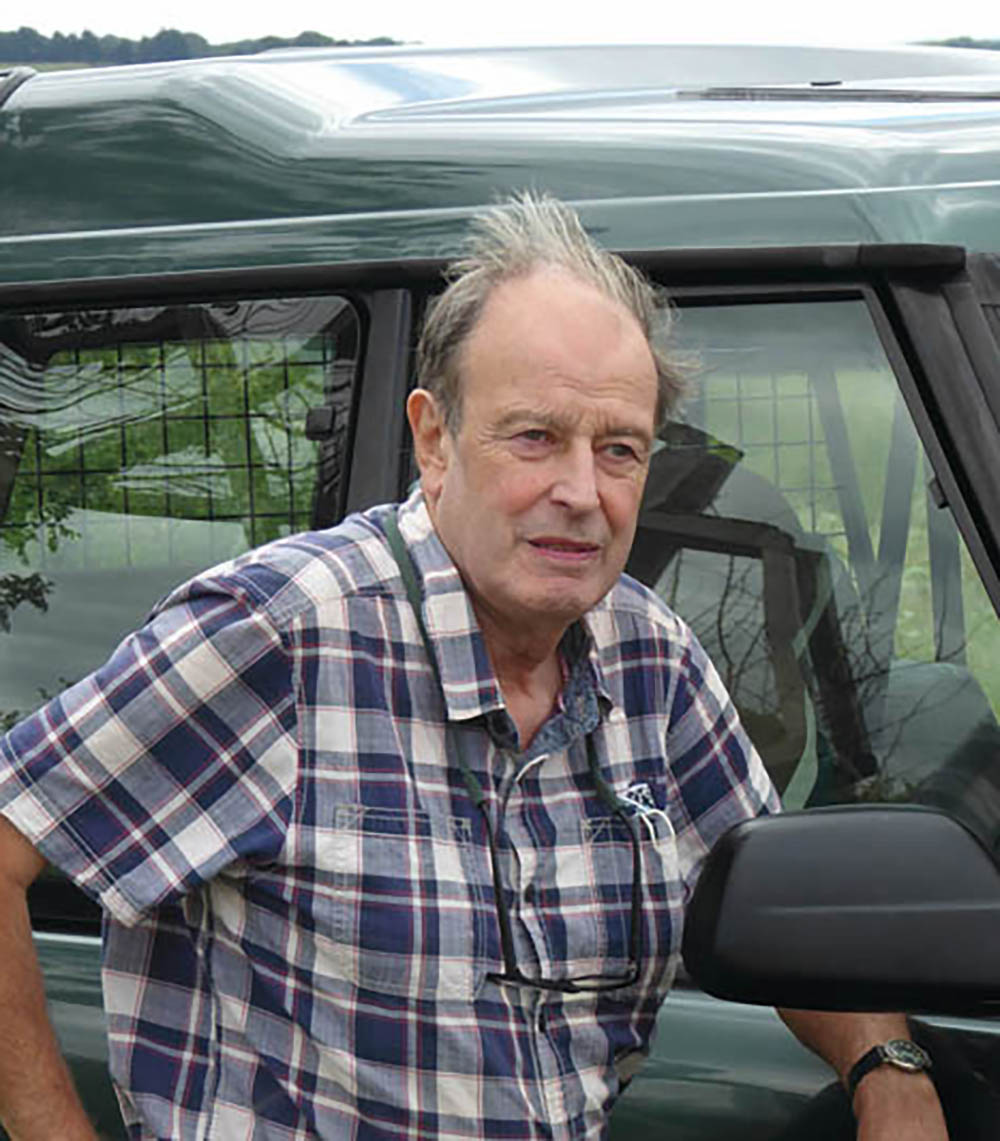 And what’s next, I ask the irrepressible Terry? “Well, I’m 76 now but I’d really like to prove what a wonderful vehicle the Discovery is by taking it to half-a-million miles.” And it wouldn’t surprise me if he did exactly that!