A Drive on the Wild Side 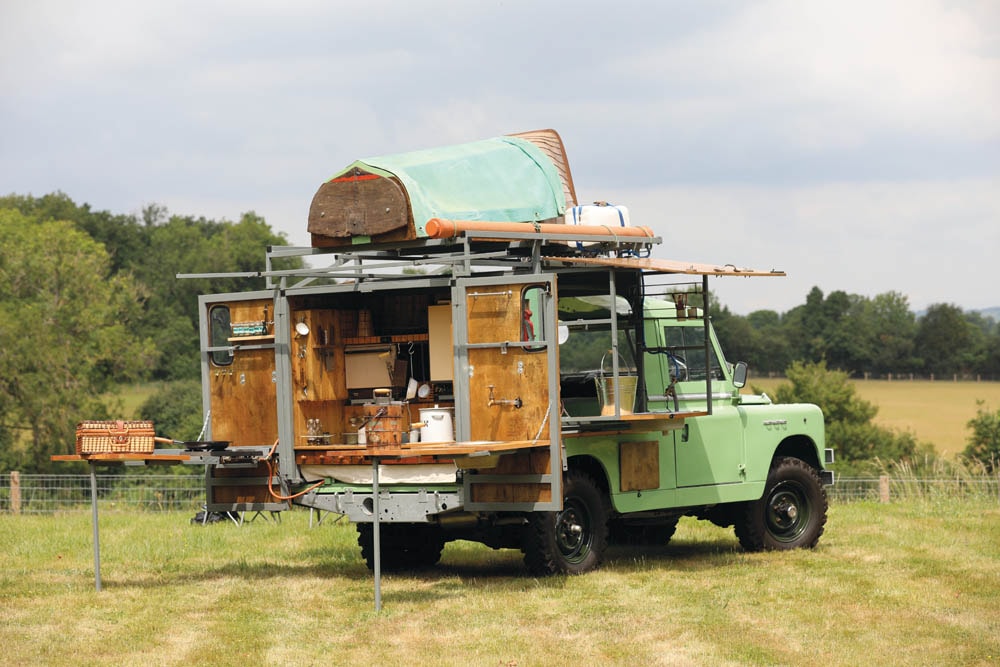 Celeb chef Hugh Fearnley Whittingstall’s Series II 109" Gastrowagon, as used on his TV show A Cook on the Wild Side, recently resurfaced again. Patrick Cruywagen takes it for a short drive and picnic

They call Land Rovers the most versatile vehicle on the planet. Farmers use them to pull ploughs. The fire services used to turn them into fire trucks. I have seen people convert them into campers, bars, gunships and hearses. The opportunities are limitless I suppose, but when I got an email out of the blue asking if I wanted to come and see a Land Rover Gastrowagon, I had to Google what it was.

Forgive me for my honesty but I had never heard of celebrity chef Hugh Fearnley Whittingstall prior to receiving that email. What I did know is with a name like that he probably went to the same school as Boris Johnson and David Cameron. I was right. He went to Eton College and was in Cameron’s year group. The Gastrowagon no longer belongs to Hugh but before I get too far ahead of myself allow me to share some of its history with you. 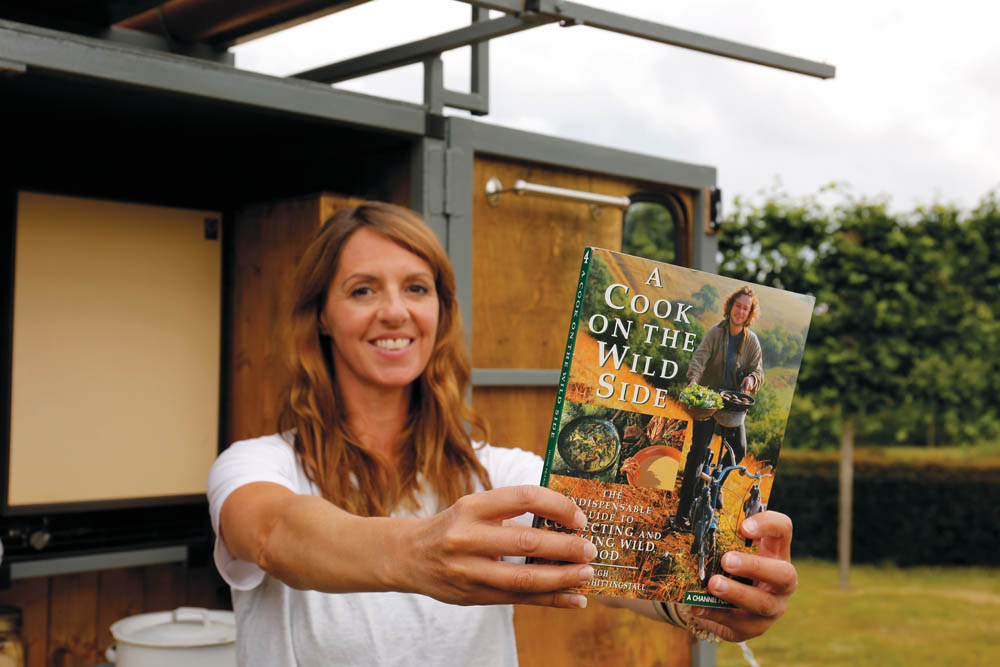 Hugh's cookbook from the TV Series that featured the Gastrowagon

A Cook on the Wild Side, which first aired in the mid-1990s, was Hugh’s first foray into television. He and his Gastrowagon headed into the English countryside in search of ingredients for the show. He saw the British countryside as this massive larder and the Gastrowagon was going to take him there in style. In the second and final series of the show he swapped the Gastrowagon for a canal boat.

Going back to that first Series... The Gastrowagon took him to north-west Scotland where he prepared scallops and sushi. There was also a trip to the New Forest where he cooked a squirrel and searched for samphire. Hugh even  took on the notorious London traffic when driving to Trafalgar Square to find himself  a fat pigeon. You can find some of the first series on YouTube, sadly, unlike the second series it is not on Channel 4 on Demand; but it was pinnacle to launching his TV career and he has since gone on to author several books, too.

What I couldn't find out is who prepared the Gastrowagon for Hugh’s cooking adventures. If you look online it was registered in March 1982 and built in 1965. I noticed on some of the footage that one of the wings must have taken a bit of a bump at some stage. I have it on good authority that after the TV series, life went rapidly backwards for the Gastrowagon, that was until it was purchased and fully restored on a galvanised chassis before being sold on again. 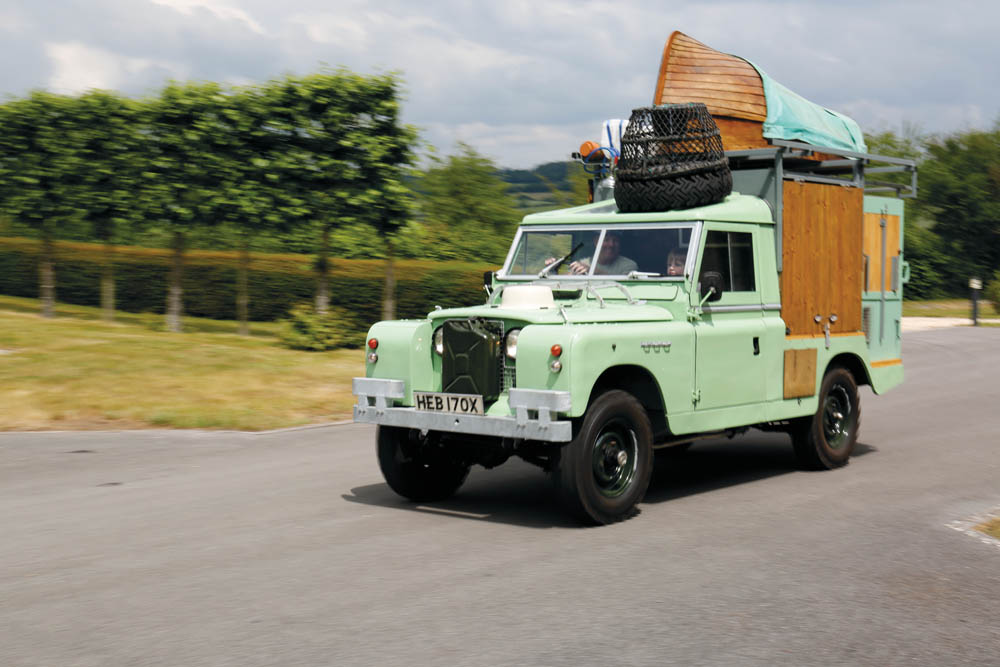 The boat is actually a rooftop tent complete with mattress

Now I find myself on the edge of the Cotswolds with the Gastrowagon. My initial impressions are that it was definitely not restored by Land Rover’s Special Vehicles division. I initially questioned the spare tyre and crayfish net on the Perspex canopy roof. I now know that it lets in more light which is always useful when filming while driving. The reason that I was allowed to use it for a picnic is that the Gastrowagon is up for sale again (see details below).

Spending an hour or two with the Gastrowagon is a little like opening a treasure chest of sorts really. Apparently it was in pieces when the restoration was done and the restorers used old video footage to try and get it just right. Included in the current sale is A Cook on the Wild Side DVD and book. They should’ve also included a DVD player. 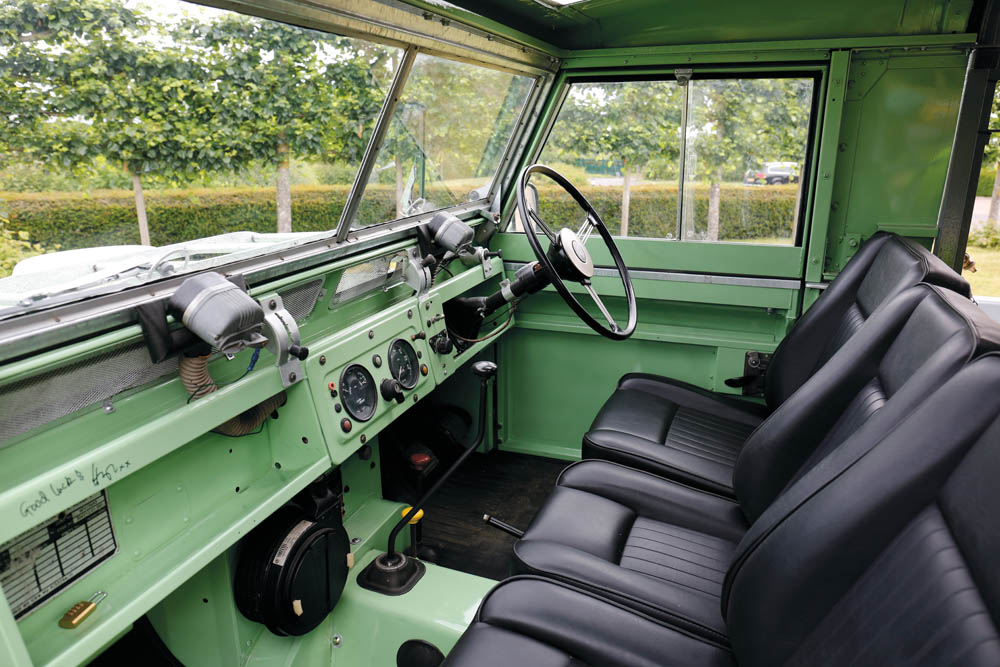 Fresh from it's interior makeover 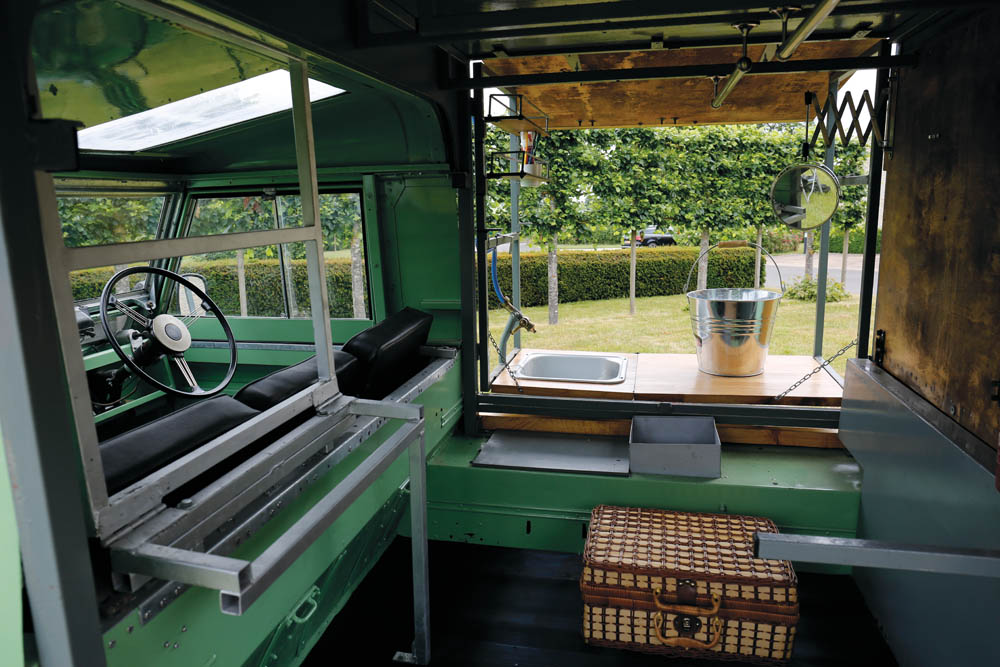 Not one but two sinks, oh and a shower

I read a report by the restorers who say they started out with what was effectively ‘a huge jigsaw puzzle’. As with most restos they completely stripped it down and began with a new galvanised chassis. They claim that all the parts were either replaced and refurbished thereby creating a ‘like new appearance and driving experience.’

Myself and the family start to have a rummage about. I initially thought that the boat on top was for launching and catching fish or crayfish but I quickly realise that it’s like the rooftop tent on mine and for sleeping in! There is even a sleeping bag and mattress  inside. The boat is for show only. Some might call it showboating. 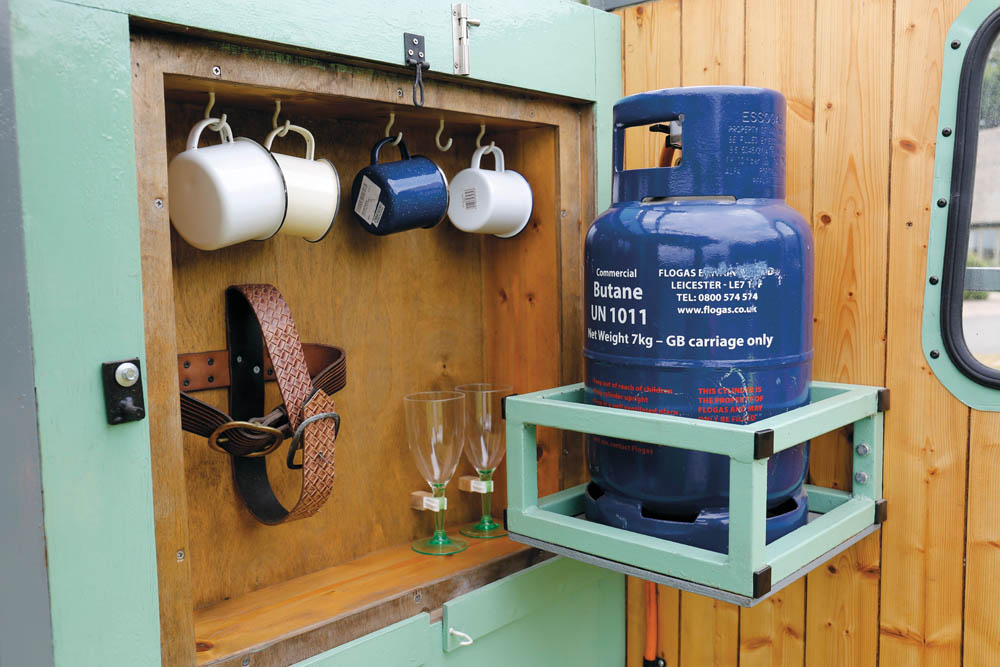 All the cooking is done on gas... Wine glasses and mugs are also essentials

The best way to appreciate the Gastrowagon is to open up the back doors and set up the tables and two-plate cooker. Cooking is done via gas, which also powers the fridge and oven. Got to keep the fish fresh or baked somehow. It all really opens up like one big kitchen complete with a sink, of course. In fact, there are two sinks! I was told that everything works as it should, so when you open the taps water comes out; if you switch on the oven your fish will bake.

Attach the surface extensions that are normally stored on the side of the Gastrowagon and there is more than enough room to peel potatoes or skin a squirrel or ten. When the resto was done, special equipment that was used while filming, had to be specially sourced. This included the Le Creuset cast iron frying pan as well as the vintage ice cream maker that was used to create gooseberry ice cream on one of the episodes. They definitely help to turn it into a classic kitchen. 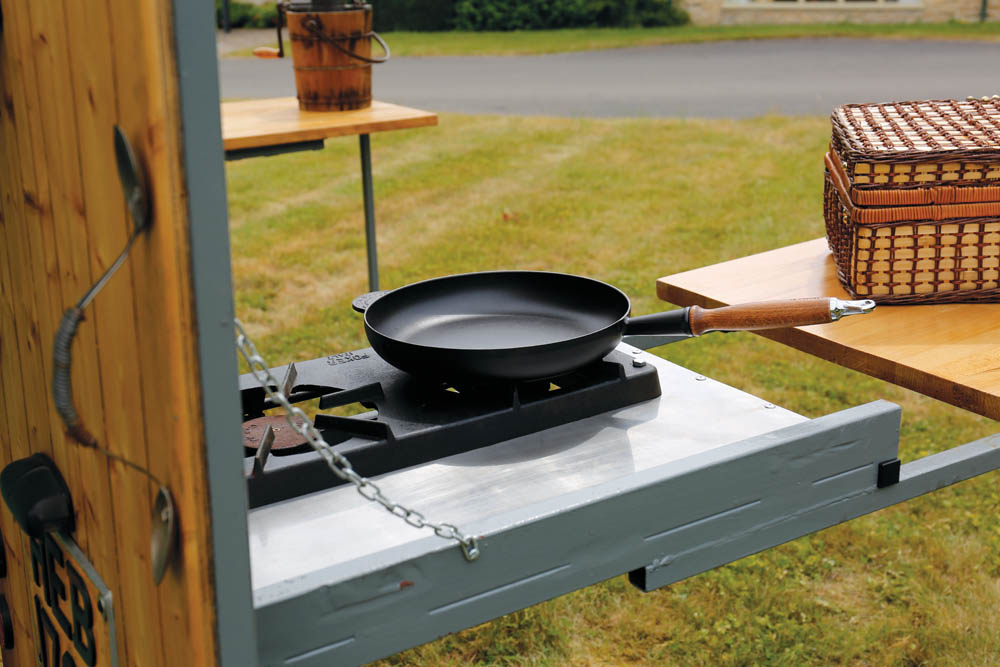 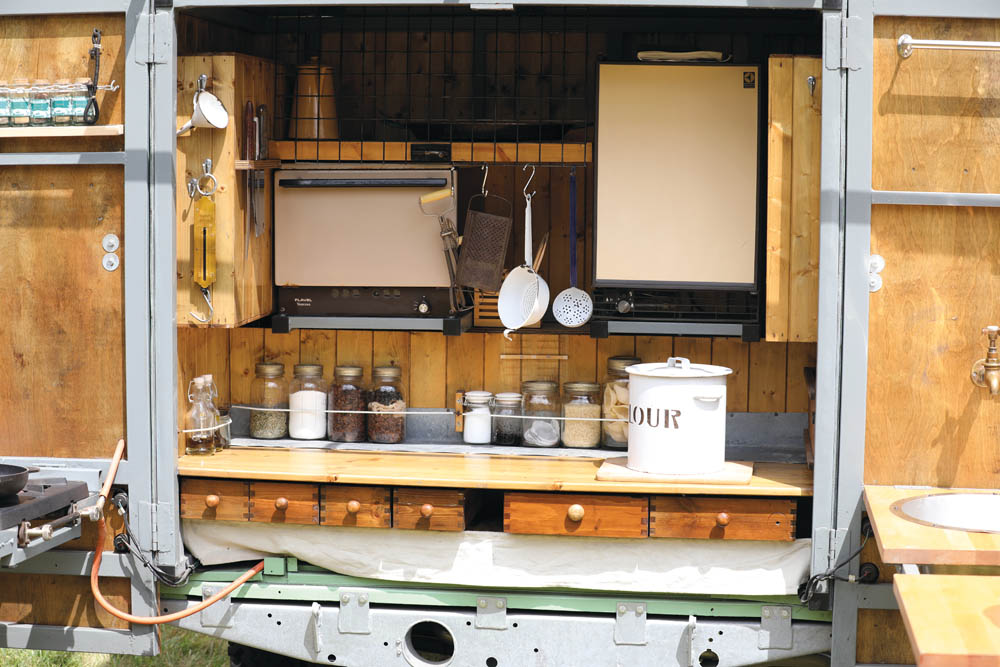 It really is a kitchen on wheels

So, one can easily see why Hugh used it for his TV show as it is like having a kitchen wherever you want it really. My only concern was the rain but there is a canvas awning which one can hook up so rain won’t stop cooking.

As I make my way towards the driver’s seat I inspect the large storage area. There is a shower that works and also a mirror to see if I have any out of control nose hairs.

I can see that the current owner has made an effort to ensure that it was all clean and tidy for my visit. I pop the bonnet and the engine bay is clean enough to eat your dinner off. The 2.25 petrol engine produces 77 bhp so driving it,
with all the extra weight on the back, to Scotland to catch some seafood, is going to be slow going. It is no wonder he swapped it for a canal boat for the second series of A Cook on the Wild Side.

I read somewhere that after the restoration the Gastrowagon was invited to attend the Spring Fair at the River Cottage HQ in Dorset, which is where Hugh filmed and wrote subsequent books and TV series, as his fame grew. Obviously he came over to have a look at the now restored Gastrowagon and kindly signed the bulkhead. 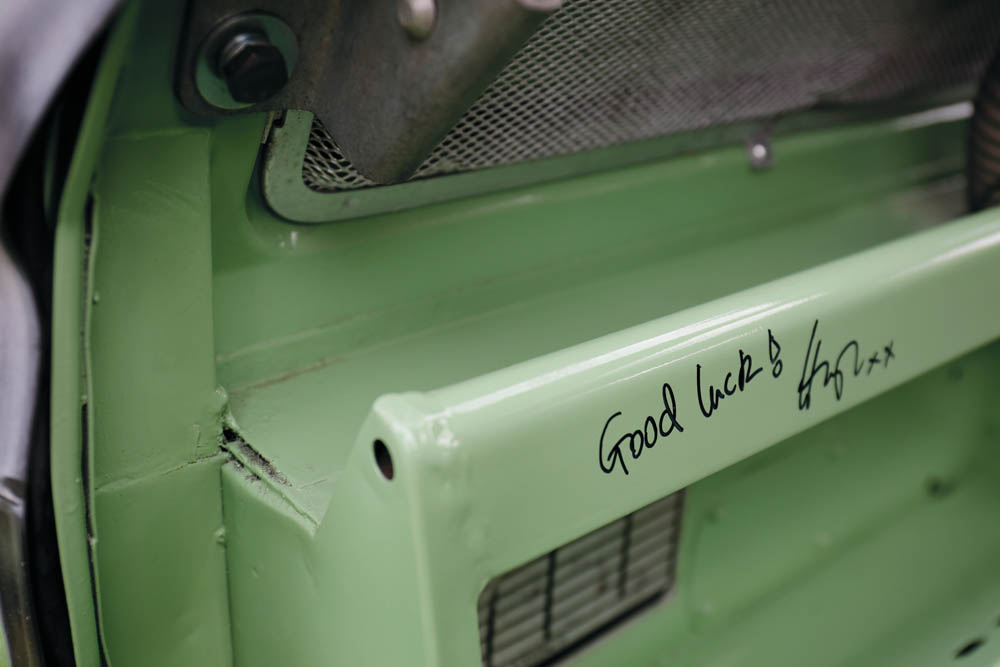 Hugh was kind enough to sign the bulkhead after its resto

I decide to pack all the gear away and take the Gastrowagon for a short drive. I would best describe the restoration as average but it’s a massive bonus that it was done on a galvanised chassis. Some of the finishing could have been better quality but the main thing is that the Gastrowagon was given a second lease of life instead of ending up on the scrapheap, as happens to many vehicles after they have been in a TV series or movie.

My son Isaac jumps in next to me as the Gastrowagon fires up first time. I pull away tentatively because the 109" with all the extra gear is not the smallest and lightest. Once in fourth and on a downhill section we get her up to 50 mph. Isaac is grinning from ear to ear. I don’t want to go faster in something that is not mine and so top heavy.

There is no denying that the Gastrowagon is a piece of British TV history. It certainly played a starring role in Hugh Fearnley Whittingstall’s drive to a successful career. I do hope that it finds the right home. Someone who likes to create fine food while exploring at the same time. Fingers crossed that happens.

To arrange a viewing or test drive of the Gastrowagon please email or call Matt Sharp. His details are [email protected] or 01993 685350