Rarest of the Rare Only two SAS Series I Land Rovers are known to survive, making them probably the rarest of the many Series I variants

The spiritual ancestor of the Series I you see here is not difficult to find. In fact, the SAS Series I was inspired by exactly the same vehicle that led to the creation of the Land Rover in the first place: the Willys Jeep.

In 1941 Lieutenant David Stirling was recovering in hospital from a serious spinal injury he had sustained in a parachute training accident. Stirling had previously been part of a commando unit known as Layforce which had been created by Colonel Robert Laycock with the specific intention of operating behind enemy lines. Following three disastrous operations involving heavy losses, Layforce was disbanded.

Stirling remained convinced that the concept was sound, and in July 1941 was successful in gaining permission to establish a new group made up of small units that would parachute down near enemy airfields in North Africa, destroy as many aircraft as possible and then walk to rendezvous points to be picked up by the Long-Range Desert Group. 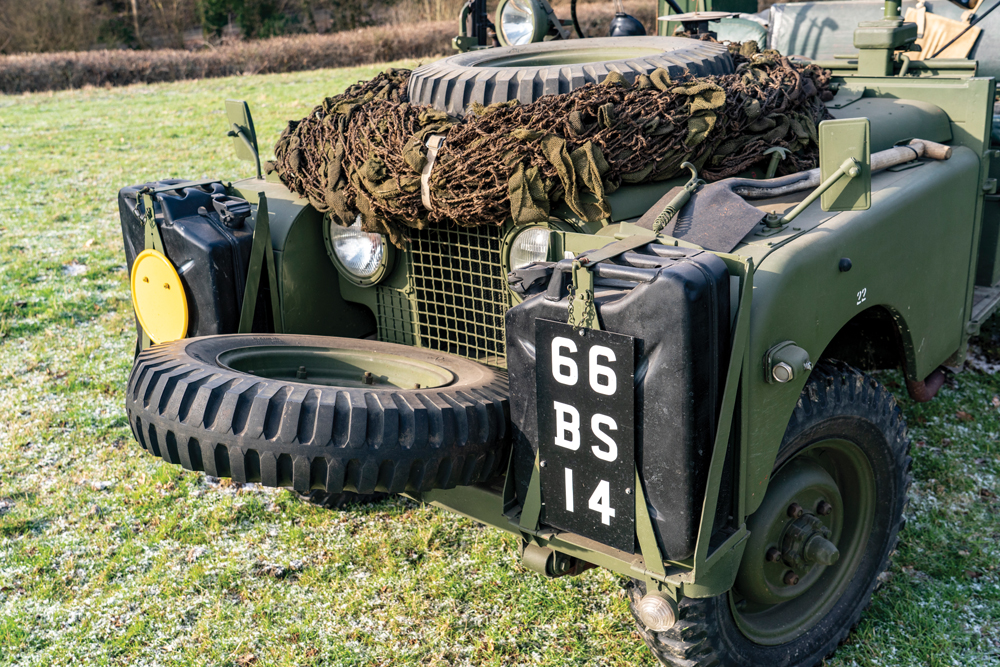 For its first mission, codenamed Operation Squatter, the unit was tasked with parachuting behind the lines in Libya to destroy enemy aircraft on the ground in support of a forthcoming British offensive. The mission ended in disaster, with only 21 of the 55 men who took part returning. Within a month, the unit was ready to attack again, only this time they abandoned the deployment by parachute and used the vehicles of the LRDG to deliver them to their targets as well as returning them to base.

With the success of these motorised attacks, Stirling's thoughts turned to creating his own lightweight and heavily armed vehicles, and the Jeep was the obvious answer. By July 1942, the unit had 15 specially-modified Jeeps in action in North Africa. As the war progressed and the front line moved from Africa to Italy and into north west Europe, so the unit followed, and by the end of 1944 it was operating behind enemy lines in Germany. They had more than proved their worth, but with the end of hostilities the unit was disbanded.

The UK found itself involved in further conflict very quickly, in Korea and Malaya, and the SAS was swiftly reformed. In these theatres the unit continued to use WW2 Jeeps, a few Austin Champs, and locally modified 80in Series I Land Rovers. By the mid-1950s, the unit’s requirements seem to have been formalised and a total of ten Series I vehicles were modified to SAS specifications. 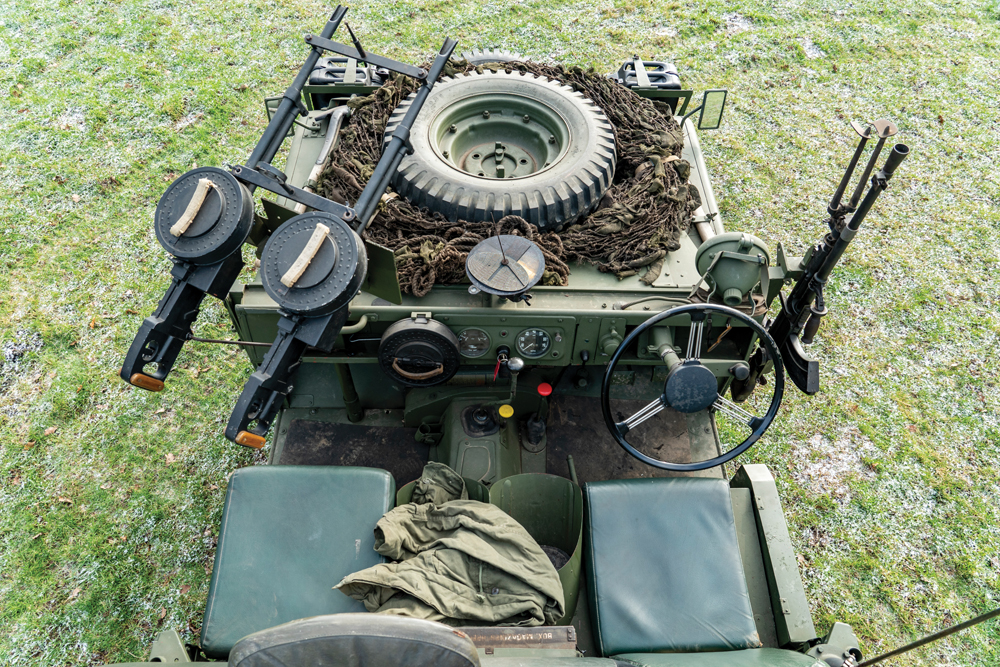 Of these, only two survive today. An 86in vehicle, which was probably one of two prototypes, carries the service registration 43 BR 70 and entered service in November 1955. The first vehicles to be converted had been in military use for some time: they were not new vehicles. The survivor is one of only two 86in SAS vehicles and was struck off charge in December 1967 at MoD Ruddington in Nottinghamshire. It is now preserved as part of a private collection.

The other survivor is 66 BS 14, one of eight 88in vehicles that are commonly considered to be the production models. This particular example entered service in March 1957 and was modified shortly afterwards. It was sold at the Mod Branston sale on May 10, 1967. It was described in the auction catalogue as a ‘Rover Firefighting 4x4 without doors and sidescreens’ and was bought by Mr J Hirst for £170. It is today one of the most popular vehicles in the care of the Dunsfold Collection. 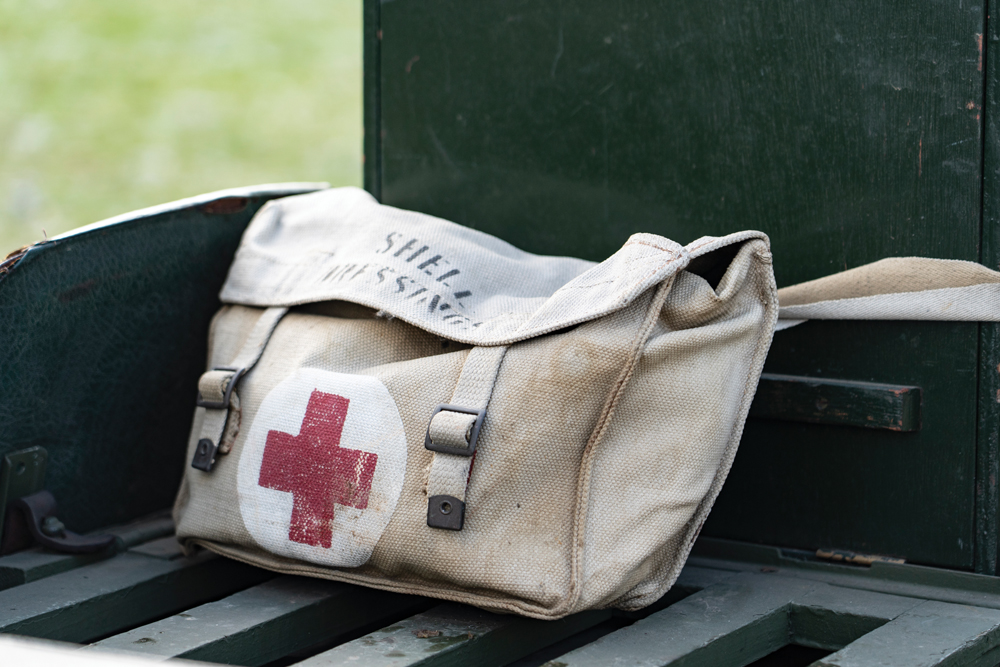 “It is one of my all time personal favourites,” says Dunsfold’s Philip Bashall, “and I think the two survivors are the rarest Series I Land Rovers out there. We don’t know if this vehicle saw any action and its military history is, as you’d expect, rather sketchy, although we do have a few poor quality photographs taken before it was de-mobbed. It is showing 2100 miles from new and I think this is genuine. It drives like a new vehicle and has never been apart.

“It’s basically a standard 88in on heavy duty springs and shock absorbers and running on 6.5x16 Trakgrips or Bargrips. We have in the Collection archive an original Land Rover company document dated February 12, 1957, entitled ‘Notes for Demonstration of Prototype Truck, ¼ ton, 4x4, C.L, Land Rover, SAS at FVRDE’, which was the Fighting Vehicles Research and Development Establishment at Chertsey. We think this relates to the demonstration of the prototype 86in vehicle.

“It is a fascinating document because it lists in great detail the War Office’s requirements and the testing regime the vehicle had been subjected to. It states that the prototype ‘was developed at the request of the War Office to meet a User Requirement for the installation and carriage of Special Air Service operational equipment’. 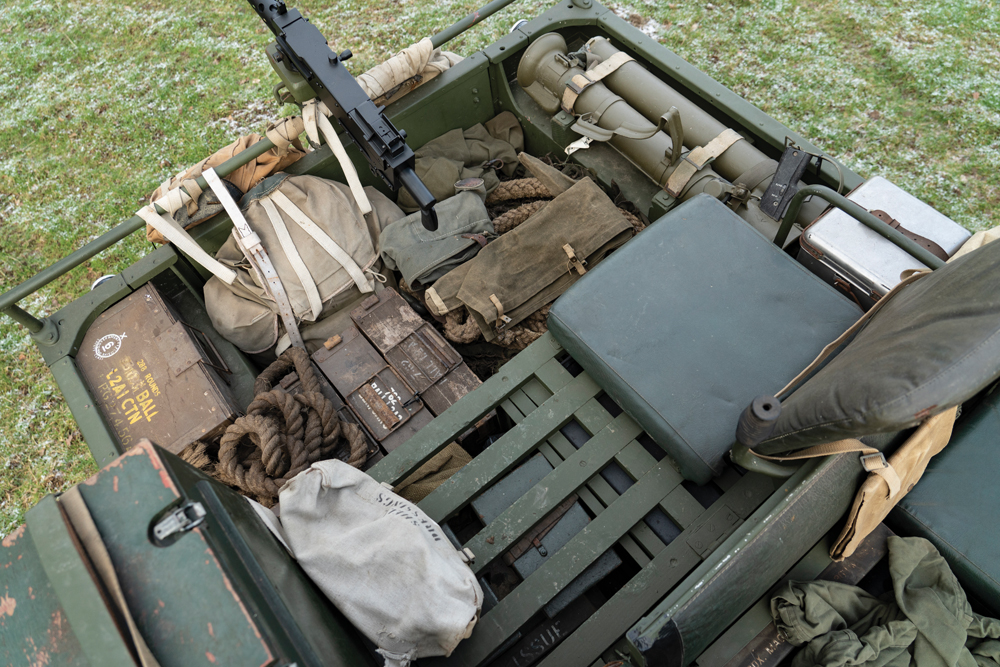 A place for everything and everything in its place. Rear gunner/radio operator’s station

“It’s fascinating to read that Land Rover made a big deal out of the fact that the vehicle had undergone 4057 miles of testing, of which 1001 miles was ‘cross-country’, 993 miles was on ‘rough roads’, 100 miles was on ‘suspension courses’ and 1963 miles was on ‘normal roads’. It all makes for an interesting comparison with modern day testing regimes on vehicles like the new Defender, which covered millions of miles during its development.

“The demonstration guide also states that Firing Trials had been completed and a total of 828 .5” rounds had been fired through the Browning, 2260 .303 rounds had been fired through the Twin Vickers, and 708 .303 rounds through the Bren. I remember hearing somewhere that an SAS Land Rover could fire 5000 rounds a minute using all three weapons. The SAS Series I was no rocket ship: the guide states that the fully laden vehicles drove from 0 to 40 mph through the gears in 24.4 seconds, which was almost ten seconds slower than a standard military 86in!”

There are also two pages listing all the equipment carried in great detail, which would be a restorers’ dream if any of the other vehicles ever come to light. It’s easy to see how the vehicle ended up almost 25 per cent heavier than the standard vehicle. As well as the three main weapons, there were boxes of .5” and .303 ammunition and magazines, boxes of grenades and smoke grenades, a rocket launcher, a comprehensive set of pioneer tools, two jerry cans of water on the front wings, ten gallons of fuel in jerricans, a sun compass, and the personal gear for the three crew members who were the driver, front gunner (who was also the vehicle commander), and the rear gunner/radio operator. The original specification refers to an auxiliary fuel tank containing another ten gallons of fuel, but this does not appear to have carried forward into the production vehicles. 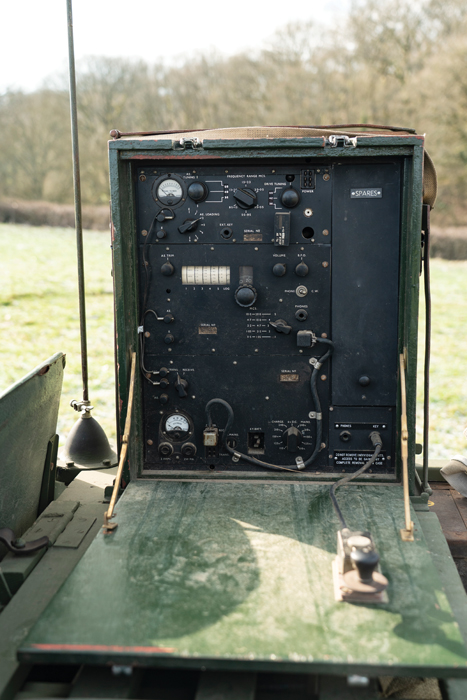 “Joe Hirst, the chap that bought it from the MoD auction in 1967, was a dealer from Andover and he quickly sold it on to a company that specialised in TV and film props. In the 1960s and ’70s the vehicle appeared in an episode of Dr Who and one of the Quatermass films. It was also a star in the 1973 film Digby, the Biggest Dog in the World, where it can be seen driving through London as part of a military convoy on its way to deal with the oversized Old English Sheepdog that has been rampaging through the land.

“The Land Rover was eventually disposed of to RR Motor Services Ltd in Kent, who apparently sold it for £2000 to a dealer in Leicestershire in the early 1980s. Well-known military Land Rover collector Barry Pocock acquired it from them and kept it as he found it for many years, until I acquired it from him in a part-exchange deal. It has formed part of the Dunsfold Collection ever since.

“This vehicle differs from the prototype specification in one important area. The rear weapon is a .30 Browning rather than a .5 inch Browning, and I’ve heard that the bigger weapon proved to be too big for the vehicle because the vibration and recoil shocks when it was fired caused the chassis to crack! 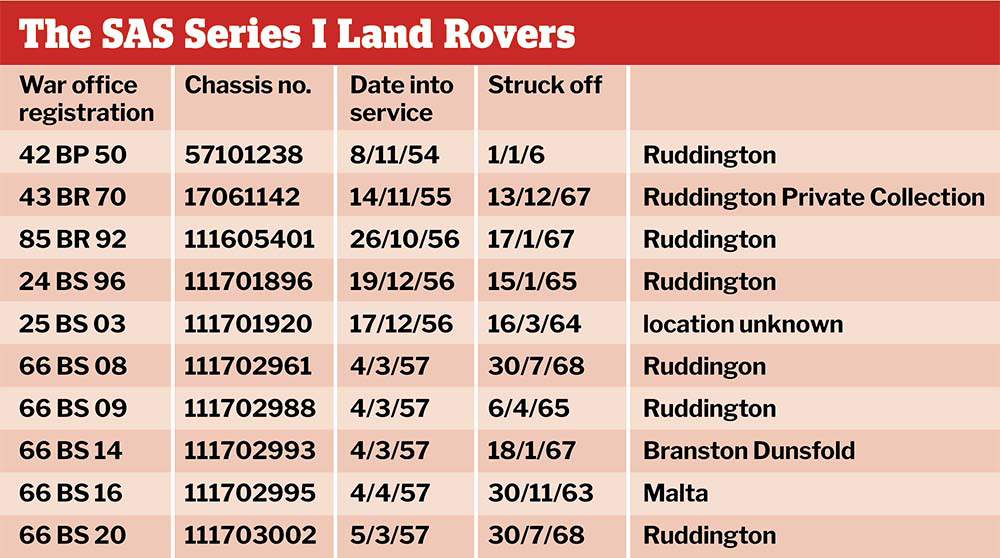 “The guns are obviously deactivated and all are original examples, or rather they were until a few years ago when I was advised that values of the Vickers guns had increased massively. These guns date back to the First World War and proved to be extremely reliable, which is probably why the SAS chose them for their modified Jeeps and Series I Land Rovers. They are quite rare and consequently difficult to find for military weapons collectors, so I removed them and fitted replicas instead. No-one other than an expert can tell the difference.

“We use the vehicle regularly and it appeared alongside the other surviving SAS Series I as part of the amazing gathering of SAS vehicles at the Land Rover Legends show in 2019. We were visited by a senior serving SAS officer whose Gulf War SAS Pink Panther was on display, and he was fascinated by his vehicle’s Series I ancestors.“Our vehicle’s last outing was also in 2019 on the regular Spring Series I Jolly in the Cotswolds. The Jolly is an informal event attended by a group of Series I aficionados and collectors that takes place somewhere in Europe over a long spring weekend. Driving through pretty towns and villages in an old Land Rover bristling with guns was an interesting experience!”