Perfection in their sights Range Rover Holland and Holland, at their own shooting grounds in London : credit: © Alisdair Cusick

The art of British craftsmanship created one of the greatest ever Land Rovers. Alisdair Cusick looks at the original Range Rover Holland and Holland

In 2000, the venerable Range Rover P38A was in its twilight years. The replacement L322 mules were well down the restricted access off-road tracks at Gaydon and Eastnor at the time. The closing years of a vehicle are always eras of the special editions, and the P38A was no different.

Rather than some quickly forgotten garish interior colours and alloy wheels, Land Rover did two much more interesting things. Both of which, to this day, hold attention. First was the Linley of 1999. Billed as ‘the most expensive and exclusive Range Rover ever made’, it was conceived as the ultimate model for the city, and built by Land Rovers in-house customising wing, Special Vehicle Operations (SVO). The model came from Lord Linley, who drew up the specification: black everything, basically, with the highest finish quality. A hand-finished repaint with no less than 12 coats, plus a custom interior, it was intended to be rare, and it was. The rarest Range Rover, ever, in fact. Just six vehicles were sold, at an eye-watering £100,000 each. 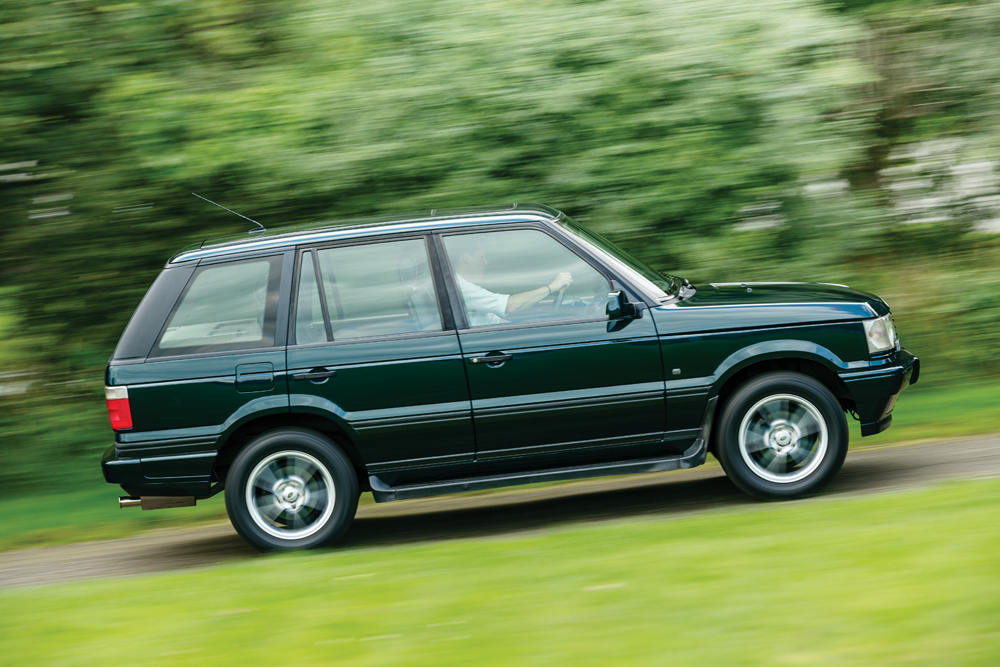 Our focus is on the complementary model of the following year, conceived as a country model. For that, Land Rover teamed up with celebrated British high-end gun makers Holland and Holland. A company renowned worldwide not only for their highest manufacturing quality, but also the exquisite levels of craftsmanship. A Holland and Holland gun takes between 650 and 1250 hours to manufacture. Each model is tailored to the shooter, handmade with components individual to that gun, made by time-served craftsmen. On top of that, models like their Royal Deluxe are beautiful things to look at, with delicate, scrolled engraving, done, you guessed it, by hand, in the factory in Bruton Street, London. So well made are they that you could still use an 1835 Holland and Holland gun today. So you should, with price tags of six figures. For a tie-in to create a model for the country, it was a great fit: Land Rover, like Holland and Holland, holds royal warrants. 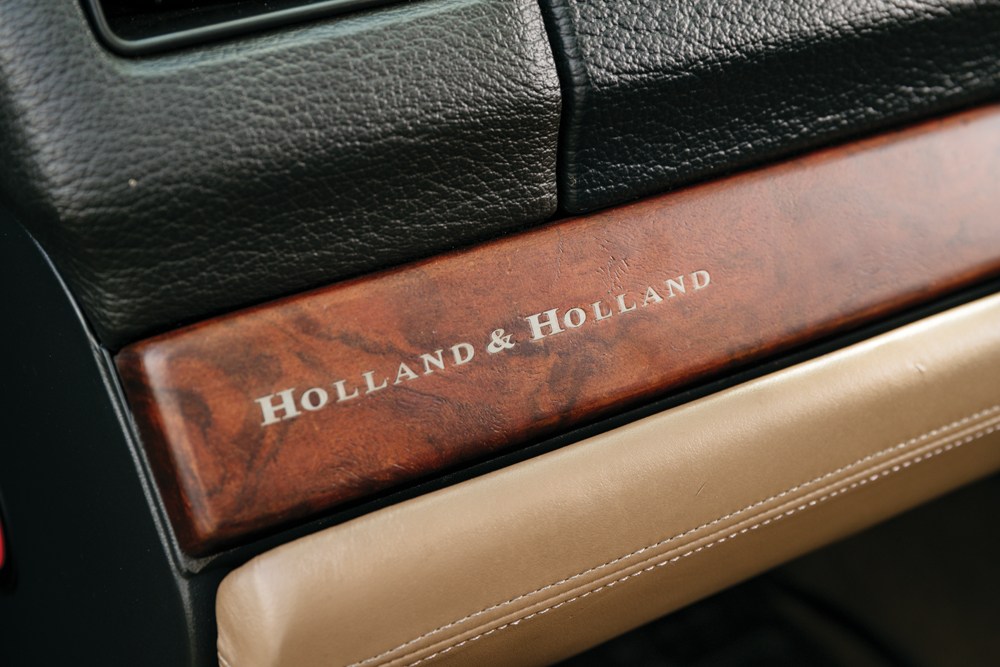 The Range Rover Holland and Holland was based on a 2000 Model Year 4.6 automatic. Mechanically, like the Linley, it was identical to production. Again, equal to the Linley, the cosmetic changes created something that stood head and shoulders above anything before it. 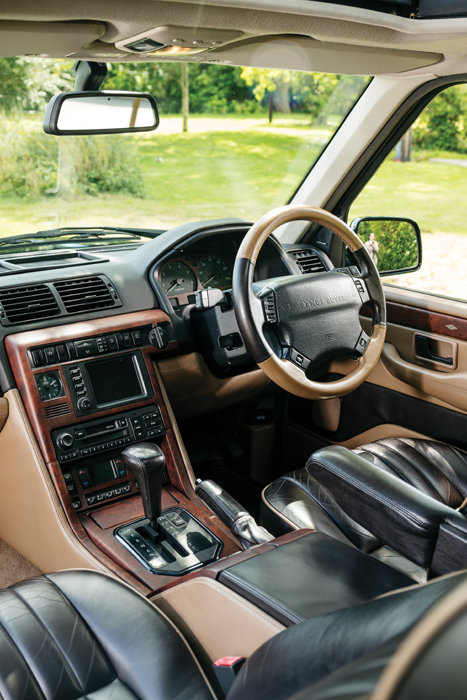 Luxury, yes, but with flavours of the revered gunsmiths' craftsmanship

Exterior paintwork was Tintern Green, a tasteful metallic hue that suited the car. Eighteen inch Hurricane alloys also wore a flash of the colour for extra effect. But it was inside that arguably defines the car. To echo the craftsmanship of the model’s namesake, interior woodwork was walnut, oiled like the gun stock, with delicate, detailed engraved metal decorative inlays. Land Rover employees involved in the project were keen reenactors, and applied their hobby’s same importance of detail to the car. That the interior wood matched a gun, to them, mattered hugely. Brown Bridle leather, with contrasting walnut colour covers the seats, dash and door trims, where it is also textured in wood grain like Holland and Holland luggage. Interior handles were given a gunmetal blue  finish, echoing that of a well-used Holland and Holland gun. Rear seats had picnic tables, and an option was a pair of headrest-mounted TV screens and video recorder, mounted in the centre console. A neat picnic table assembled from the loadspace floor – once you’d removed the tailored, waterproof loadspace cover, that is. If you wanted a gun cabinet, you could have one, made by Car Furnishings, not far from Birmingham’s Gun Quarter. The extra work all took 30 hours at SVO after the production line, and the car was yours for £63,495 without the TVs, £69,995 with. 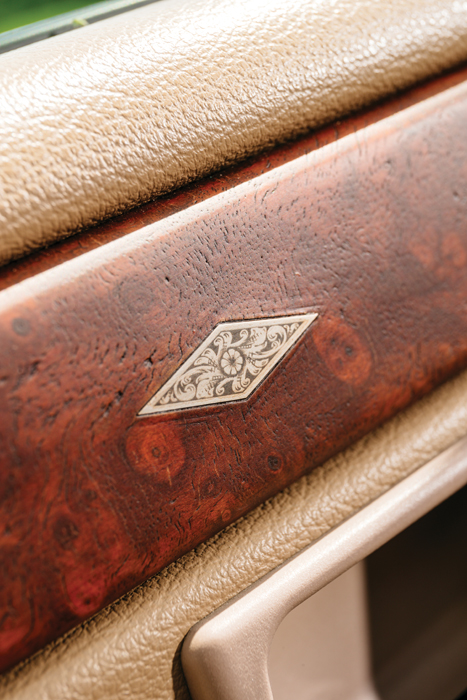 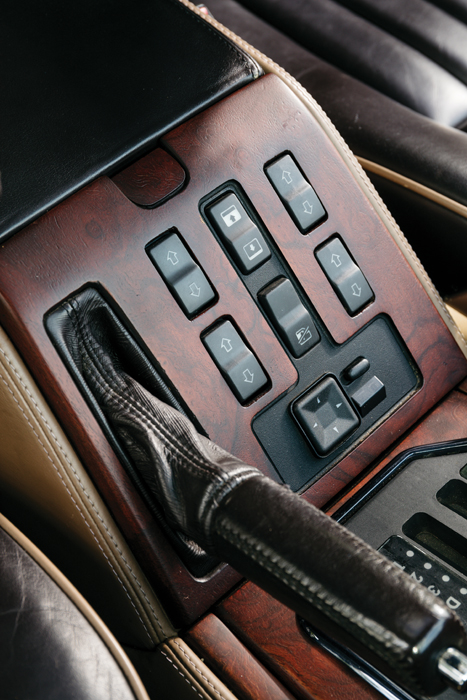 Woodwork oiled as a gun stock 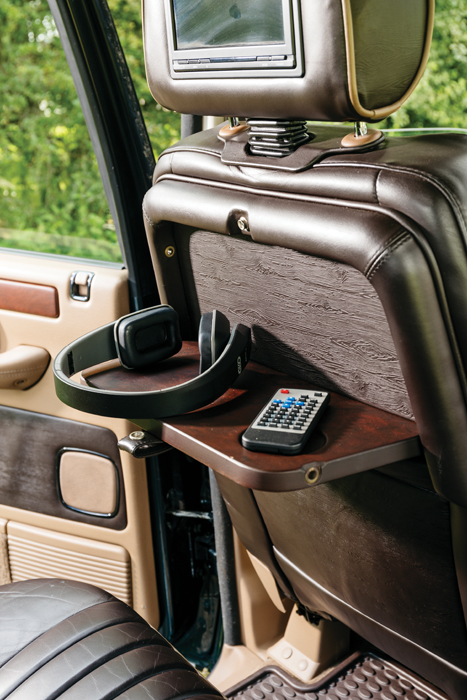 Limited to 400 models, the production run was split as 300 numbered editions in the US, and 100 unnumbered for the UK. Of that 100, it is claimed that seven were left-hand drive cars for the Netherlands, meaning 93 UK cars in total. It was well-received at the time, but 21 years later, how have they fared?

Enter Mike Coulton from Buckinghamshire, who is possibly the first person to give serious restorative attention to a P38A Holland and Holland. A veteran of Range Rovers, he owned a tidy P38A Vogue last year, when something rarer caught his eye. “I wasn’t intending on buying it – I’d just finished restoring the Vogue – and this turned up,” he recalls. “I decided to sell the Vogue and take on this, which needed some love.”

A fan of P38As right back to when he saw them new whilst doing his paper round as a boy, he was enjoying his Vogue. “For me, the Holland and Holland is the ultimate P38A. When it came up for sale – and this one in particular – I had to go for it.” he admits.

The difficult thing with Holland and Holland models, from an enthusiast’s viewpoint, is all the interior trim. All those extra bits so often go missing. This one had everything still and an amazing MoT history. 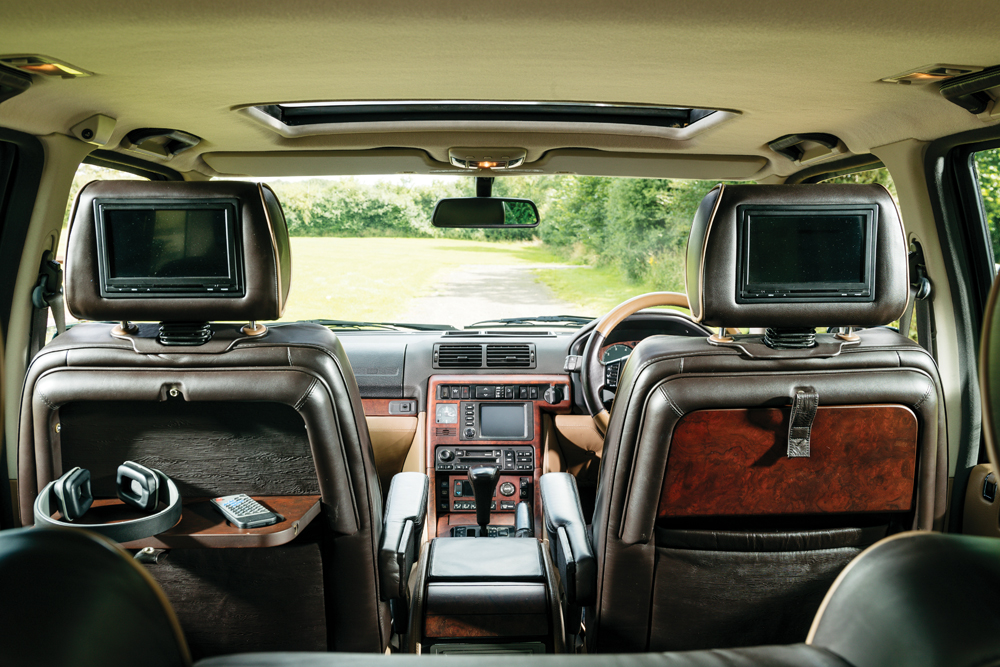 A recreated brochure shot, and a special place to sit

First came a chassis overhaul. Air suspension was refreshed with a new compressor, airbags all round, shock absorbers, plus any bushes or drag links it needed – basically, to get it driving as good as it gets for a 21-year-old Range Rover. Mechanical work came next, and the 119k engine (replaced at 55k by Land Rover) had a few leaks that needed attention, plus a general fettle. The interior work he did himself, re-oiling the wood with gun oil to restore the lustrous satin finish, then deep cleaned the leather. Finally, paintwork – which ended up being everything bar the roof, as so often happens. 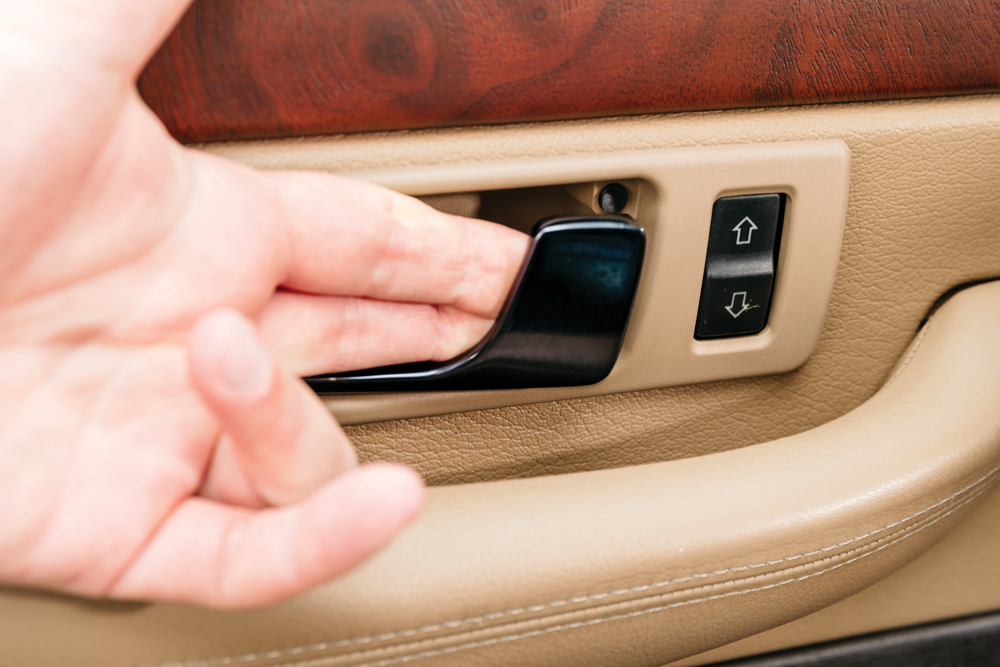 There are two non-standard items on the car: a stainless sports exhaust, and LCD screens and a DVD replace the original system. “Though I’ve got the originals still in boxes, and can be refitted if needed,” he adds. 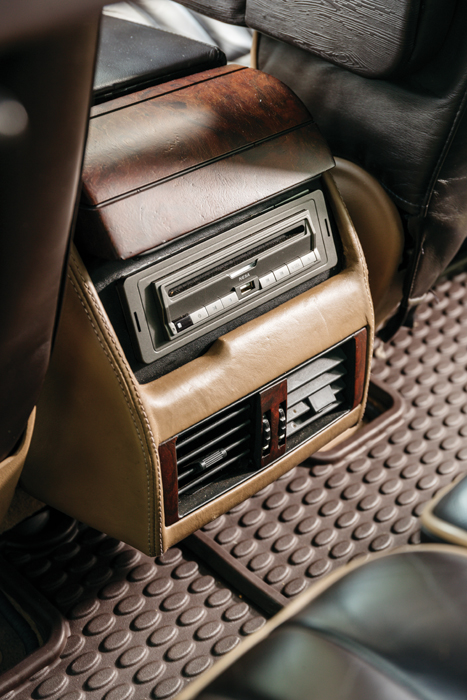 Mike got interested in how many were left, particularly of how many had the TV. “I’ve tracked down 38 in the UK that are still on the road,” he reveals. “I’d love to find more, the difficulty is only about 50 were registered as Holland and Holland, the remaining 50 were registered as 4.6 HSE which makes tracing them difficult.” Twenty cars are quoted as having the TVs. “My register has over 30, so I suspect dealers fitted them as an accessory. 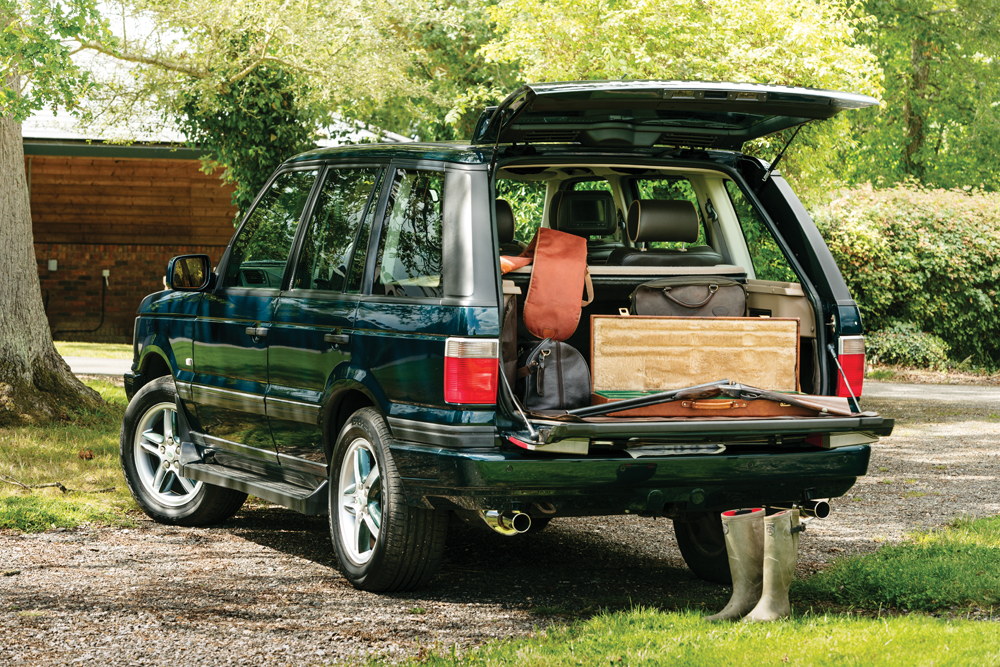 “To the best of my knowledge, this is the first Holland and Holland in the UK that’s seen restoration attention,” he tells me. “I know a few that have been bought to restore; I know of a couple in America that have been restored to a very, very high body-off standard. The nice thing is they don’t really rust. The electrics were fragile, and I think misunderstood. Touch wood, this one’s been reliable,” he adds. 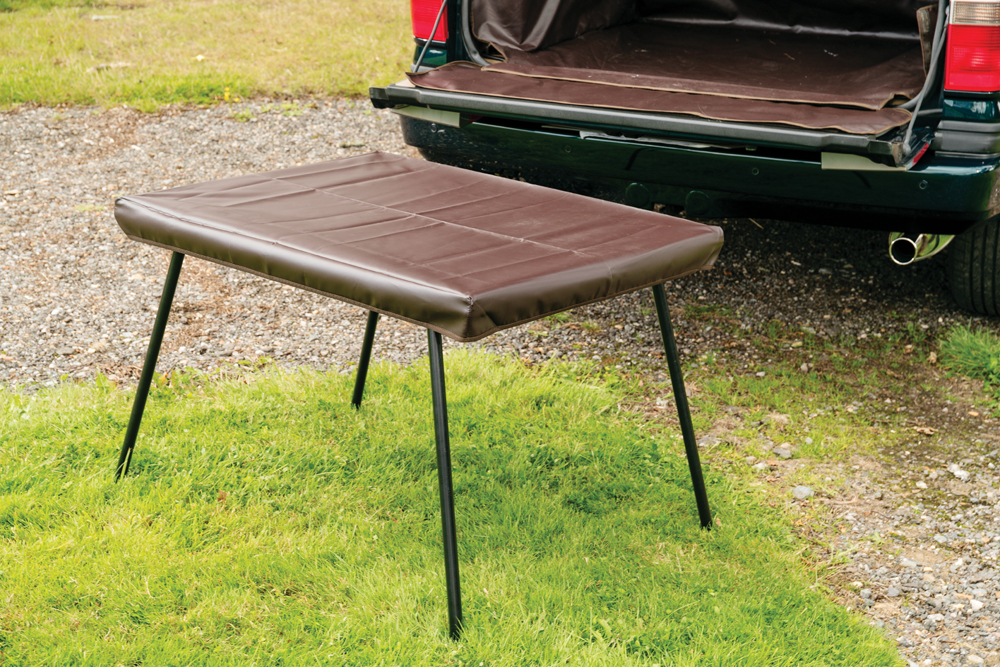 From the brief of the country Range Rover, it is a success. Putting your Holland and Holland guns – typically used in pairs – in the back of a car, you want to put them in a car that reflects the same level of craftsmanship and exclusivity, which this does. The owners who drove them off the forecourts in 2000 have likely moved on from the cars, but the cars remain, and they leave a legacy unequalled by later L322s and L405s. Suffice to say, none have the rarity, or ambience of these P38As.

The unobtainable Linley may be the ultimate, but the Range Rover Holland and Holland stands as a high water mark for Solihull to this day. 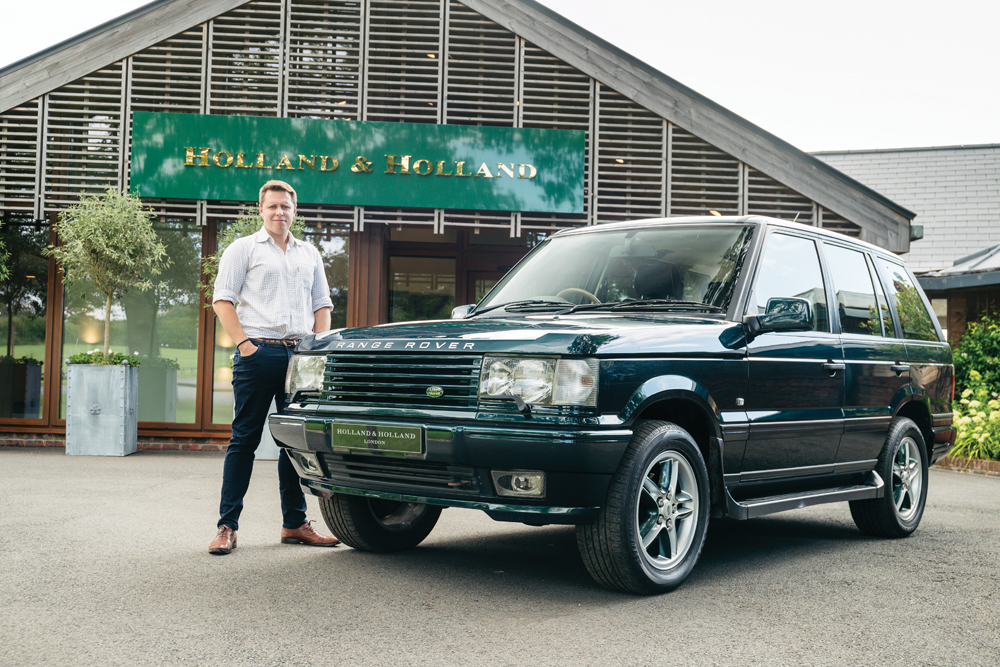 Mike has decided to sell the Range Rover to make way for his next project. So, if you would like the opportunity to own arguably the finest Holland & Holland in the country, please get in touch via the Instagram handle @rangerover_hollandandholland or 07736 305973

If you have, or know of a Holland and Holland, do contact Mike, who will add you to his database.

With grateful thanks to Holland and Holland for allowing us to photograph this vehicle at their London shooting ground. Set in 60 acres of stunning open countryside, Holland and Holland have provided world-class shooting tuition since 1939, and is the premier destination to shoot both shotguns and rifles.

For more information on tuition, gun fitting or gun sales go to hollandandholland.com/shooting-grounds or call 01923 825349