2020 was always going to be an important year for Range Rover fans, but for Gary Pusey 2021 is the year that really matters…

August 24, 1991. The day I became a Range Rover owner. I remember the day as if it were last week. I’d spent a lot of time researching and working out what I could afford, scouring the off-road magazines in those distant, pre-internet days. And now I thought I’d found what I wanted at my local main dealer, Taunton Garages in Somerset. It seemed to tick all the boxes and the price was only slightly above my budget.

Owning a Range Rover was an itch I’d needed to scratch since I was a teenager in the mid-1970s, when I first saw one in London and thought it was the coolest thing. I had to wait a long time, but now the day had come. That 1987 Ascot Green 3.5 Range Rover was going to be mine. I’d made up my mind. This was the one. And I had an appointment to take if for a test drive. 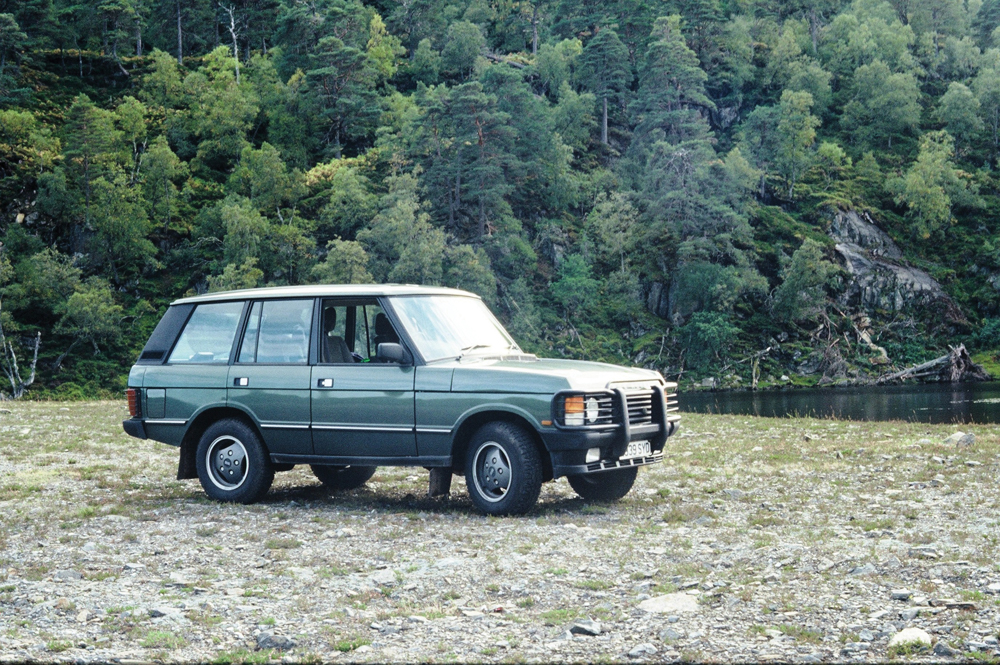 I’m sure the salesman could tell that he wasn’t going to have to work too hard to secure this particular sale. He knew he had me on the hook the minute I turned the key and the gorgeous V8 burbled into life. When we got back to the showroom he played his trump card, casually suggesting that before I made up my mind perhaps I’d like a spin in their 1990 3.9 auto demonstrator? Needless to say, it was no contest! Despite exceeding my budget by a considerable margin, with a scribble of the pen on the hire purchase agreement I bought H939 SYD. I probably wasn’t the first person to go out with the intention of buying something very specific and coming home with something different.

But I was in heaven. The company car found itself unloved on the driveway and the new-to-me Range Rover became my vehicle of choice. Needless to say, it was soon christened Syd, for fairly obvious reasons. I devoured every book I could find on off-road driving techniques, and I took my first drives along the local greenlanes. I knew the lanes were tame because I’d walked them many times, but it was great fun to be driving them in my Range Rover. 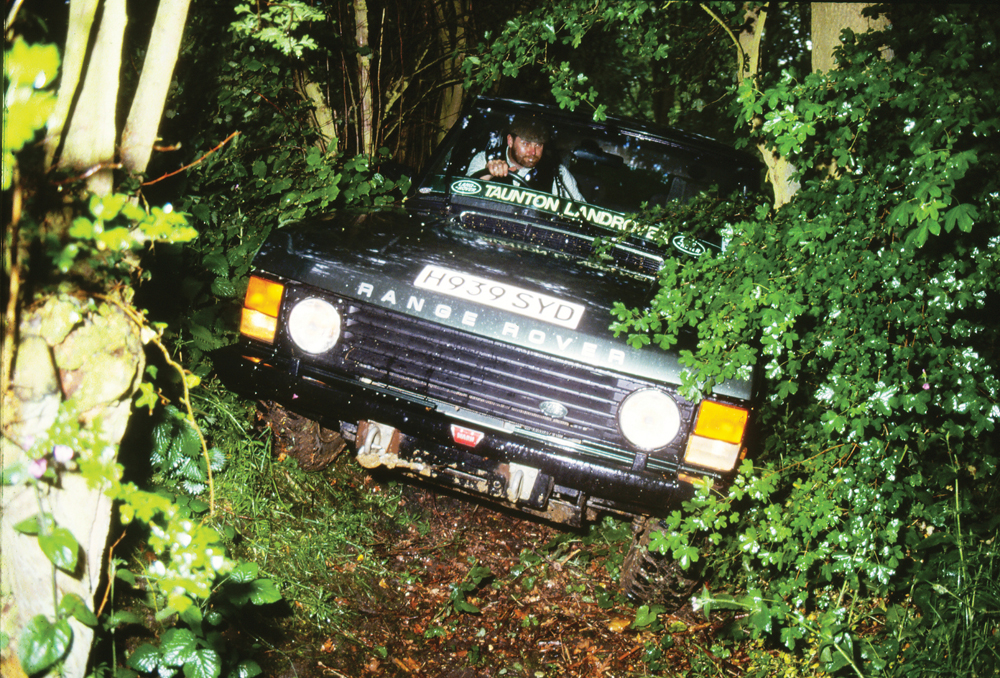 The salesman at Taunton Garages had thrown in a free day at the new Land Rover Experience off-road centre at the Solihull factory site, and that’s where I had my first introduction to serious off-road driving a couple of months later, courtesy of an LRE Range Rover and an instructor who just happened to be Roger Crathorne. I was immediately, utterly, hooked. I needed to get some more of this!

I signed-up to join an off-road Challenge Weekend at David Mitchell’s in North Wales, and there met a very youthful Nick Dimbleby who was photographing the event for LRO. It turned out that Nick lived with his parents just outside Taunton, a few miles from me, and we soon came up with the idea that we should collaborate on a series of articles on the theme of learning to drive off-road, which would involve us visiting many of the growing number of off-road training centres that were springing-up all over the UK.

LRO’s editor, Richard Thomas, who would later become the founding editor of LRM, was delighted to accept the proposal. After all, where else was he going to find someone daft enough to take their nearly-new Range Rover to a dozen off-road driving schools, drive through everything they had to offer, allow himself to be photographed and published in various degrees of embarrassing stuckness, and pay for his own repairs? But it was tremendous fun, and I was really only doing what it said on the tin. And I certainly learned a lot in a short space of time. 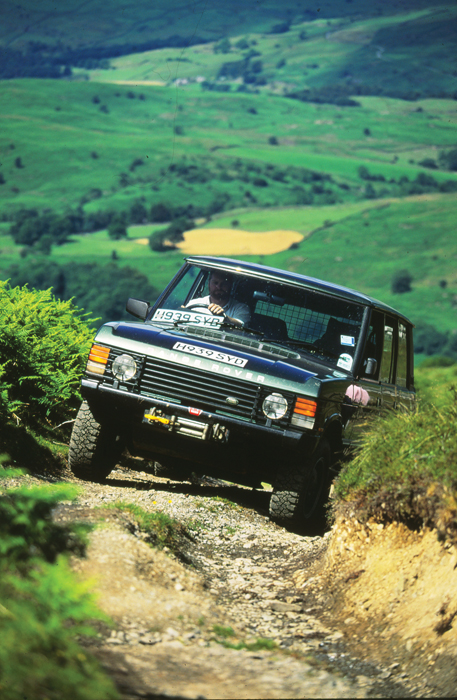 Those off-road driving schools ranged from purpose-built facilities to open hillside, from forestry tracks and muddy fields to redundant quarries, run by experienced pioneers in off-road driving or relative newcomers who’d spotted the increasing interest and jumped on the bandwagon. Each school was different, and every visit taught me something new. The Range Rover acquired some honourable battle scars along the way, but after the first scratch and dent you stop worrying and get on with the fun. And the car looked even cooler with all the evidence that it was being used as its makers intended. Not many were. Even fewer are today.

Syd also evolved quickly in the light of the experience, losing its front spoiler and bumper endcaps very quickly, and gaining a modified rear tow hitch with improved departure angle, a set of BF Goodrich Trac-Edge tyres, protection for the steering and front diff, and a very neat winch installation courtesy of David Bowyer. When the standard exhaust got bent beyond salvation it was replaced by a bespoke, stainless steel big bore that meant I could be heard miles before I arrived. The only thing I drew the line at was hacking at the body panels to fit a snorkel, mainly because enquiries at the factory suggested that to avoid strangling the engine the plumbing would have to be the diameter of a dustbin. 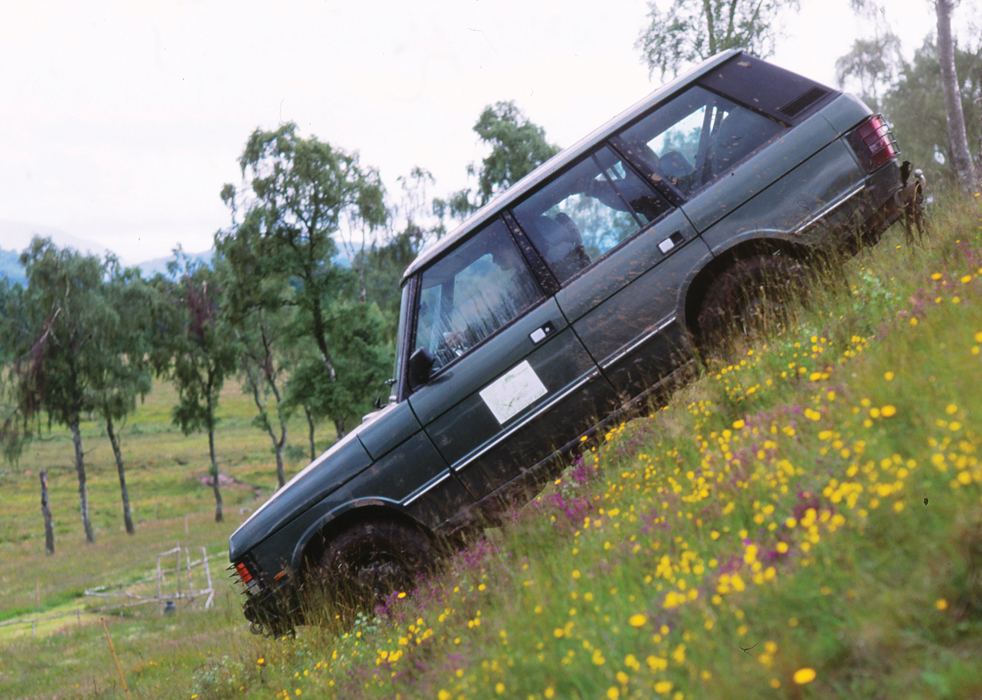 Greenlaning trips became a passion as well, including some competitive events on private ground, but after just one All Wheel Drive Club trial I decided that these weren’t really for me, although I continued to participate with a work colleague in his V8-powered Series I trialler.

Some of the greenlaning trips were spectacular, including David Bowyer’s three-day Secret Wales expeditions, which were tremendous fun, as was a coast-to-coast off-road Trans-Scotland jaunt. Then there was the trip to the famous Val d’Isère 4x4 show, which included driving from Paris to the French Alps off-road, pretty much all the way, and several more Challenge Weekends in North Wales. 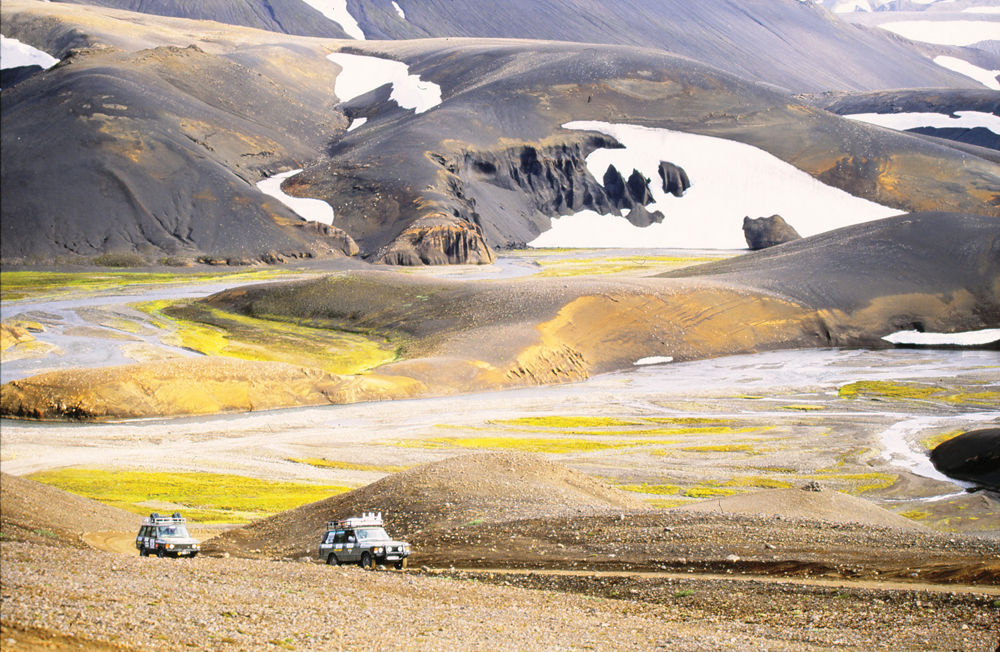 If you do just one overseas off-road journey, make sure it is in Iceland

Without a doubt the pinnacle was a trip to Iceland in 1993 that we organised ourselves, obtaining sponsorship and discounts from airlines, shipping companies, camping equipment manufacturers and clothing firms. Close friend Chris and his wife Roberta took little persuasion to join us with their 1984 Range Rover, which was notable for being a Nissan turbodiesel conversion. We modified off-the-shelf roof  racks with the help of renowned off-road instructor and expeditionist Keith Hart, fabricated our own storage boxes out of plastic bottle crates, and tailored everything to fit in the rear of the two Range Rovers.

Roberta took charge of food and drink, and my girlfriend, Fiona, later to become my wife, took care of the medical supplies. It was handy to have a career nurse on the team. Nick Dimbleby wasn’t going to miss it for the world, and neither was his then girlfriend, Claire. The fully-loaded vehicles were delivered to the port at Immingham, and several days later six of us flew from Heathrow to Reykjavik, courtesy of Icelandair. It felt like a tremendous adventure and the culmination of everything I’d learned since acquiring Syd.

And an adventure is exactly what it turned out to be! The off-road tourism industry was in its infancy back then, and once we were away from the capital we saw very few vehicles at all. We spent the next ten days completing a double traverse of the island as well as driving long stretches of the stunning coastal roads, camping wild every night as the temperature dropped to well below freezing. There were endless river crossings, mostly relatively shallow and easy, but we were surprised several times by deep, fast-flowing water that required care and concentration. If we deemed it necessary, Nick could usually be persuaded to wade out to test the depth. 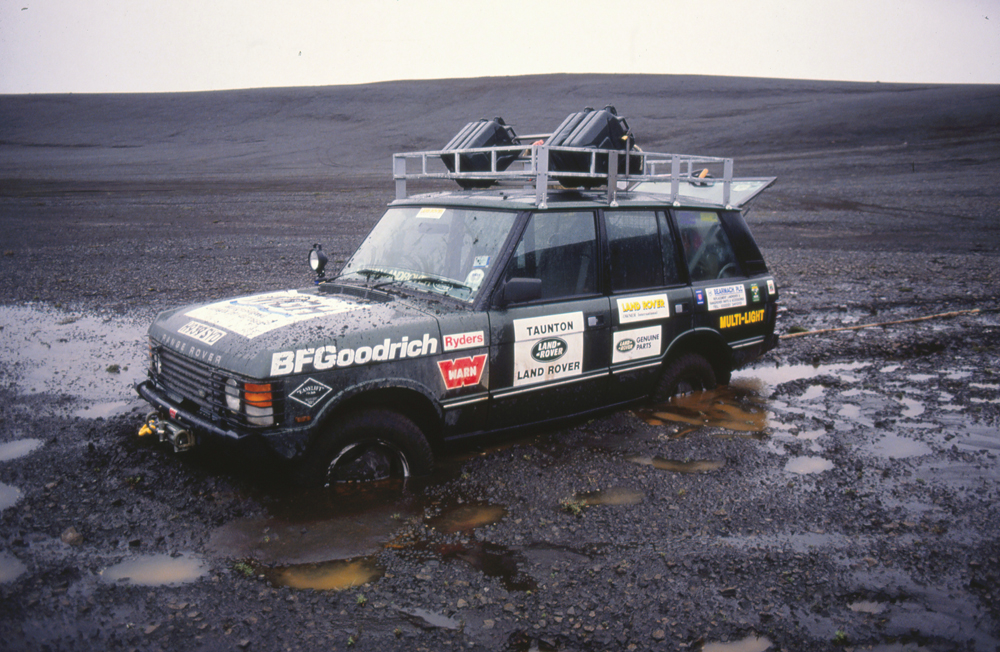 Occasionally it snowed, including on one memorable day when I deviated from the track to explore a distant lake and promptly found myself sinking to the sills in a semi-liquid morass of black volcanic sand. The ensuing recovery took many hours and proved so challenging that at times I wondered if we would ever extricate ourselves. Just before dark it started to snow, and the recovery was completed in darkness and a swirling blizzard. Never was I so pleased and relieved to crawl into a tent!

The brake pipe on Chris and Roberta’s Range Rover rubbed against the chassis and perforated, so he lost braking on all four wheels, something that was discovered quite by chance when I stopped on the track for a routine map check and Chris sailed past me, frantically pumping the pedal. We were struggling through an attempted repair when, as if by magic, two German registered 110s appeared out of nowhere that turned out to be crewed by a team of REME chaps assigned to 7 Signals Regiment, under the command of Captain Mike Reynolds. Mike swiftly allocated a repair detail to us and eventually we had brakes on the front wheels, enough to allow us to finish the expedition and return to the docks at Reykjavik.

By then, Syd’s shock absorbers were shot and the rear diff was grumbling its displeasure at being asked to turn the wheels. Nevertheless, both vehicles made it home safely from Immingham to Somerset. 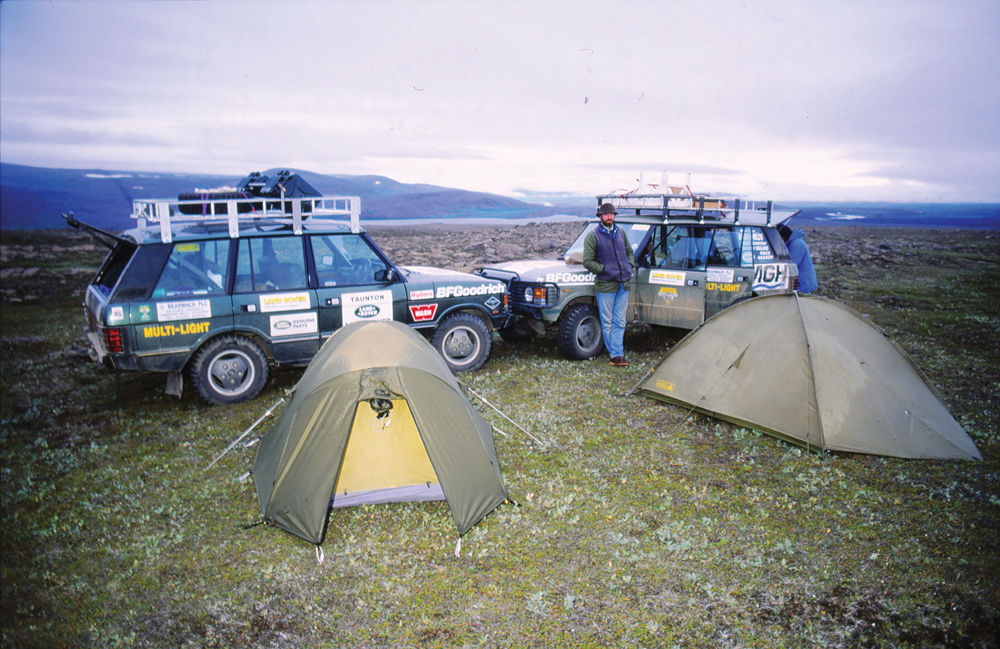 All of these escapades became articles in LRO, with a total of 36 separate features appearing between December 1992 and March 1995, all accompanied by Nick’s wonderful photographs. But by then I was fully occupied with a new job, a house move, marriage and the birth of our first child, and Syd was relegated to trips to the DIY store or the dump. With every passing year, getting an MoT was becoming more and more difficult. And expensive.

Finally, in 2004 and with 107,960 miles on the clock, it was clear that the continual attempts at patching-up and making-do were not sustainable, and the final straw came when the exhaust manifold cracked badly. Protesting noisily, Syd was reversed gently into a crumbling old outbuilding. At that time there was no way a proper renovation could even be considered: there were neither the funds nor the time. The only thing I had to offer was a roof, and my priority was simply to keep the Range Rover tucked away, slow the deterioration as best I could, and hope that one day a resurrection might be possible. More than a few voices told me to cut my losses and scrap it, but Syd was a keeper and, the way I saw it, saving it was the only acceptable option. It would be another four years before the doors on the outbuilding were opened, but that’s another story.