Restoring an old Land Rover can sometimes be a labour of love – David Meek’s 1962 Series IIA is a case in point, as Bob Weir discovered

David Meek is from the small town of Edzell in Tayside and has lived in the area all his life. He is a mechanic by trade and works at the local garage in the High Street, just across the road from his house.

“Because it’s a country garage we get all manner of vehicles coming through the door, including tractors and old Land Rovers, of course,” he grins. “The area around Edzell is hilly and green oval badged vehicles are quite common, particularly the older models.”

David has been fixing up Land Rovers for years in his spare time, and his back yard is full of various projects awaiting attention. He takes up the story: “I’ve got several Land Rovers on the go at the moment including a 1985 110 fitted with a 200Tdi, a 1969 IIA SWB that came from a local farm, and two others that may end up being used for spares or repairs,” he said.

NYJ 499 was able to jump the queue because there is a strong family connection. “Although I knew about the existence of the Land Rover it was offered to me out of the blue,” David explained. “The IIA was originally sold new to my mother’s first cousin Angus Davidson. Uncle Angus was a local farmer who had a holding just up the road in Glen Esk.

David recalls that by this stage the Land Rover was looking worse for wear. “The second owner had done some work to the chassis and bulkhead, but there was still a lot of repairs that needed to be done,” he recalls. “He had also replaced the original petrol engine with a 1963 Rover diesel unit. At least the engine is genuine and is stamped. Most of the original body panels were still there but some were badly damaged.” 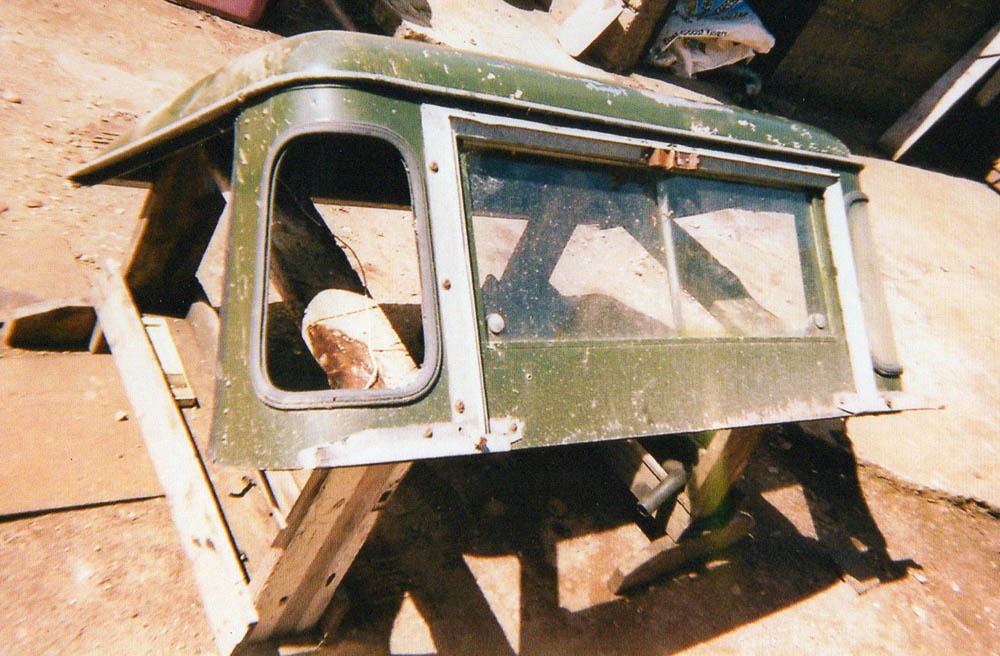 The cab was in poor condition, with several dents in the roof panel

David was fortunate in that he did not have to do all the work himself and could rely on his close friend Brian Greig. “Brian lives in the nearby town of Forfar and is a painter by trade,” David explained. “We’ve been doing stuff together for years. He took care of the paint side of things, while I focused on the Land Rover’s mechanics and bodywork.”

Although they are both experienced restorers, David was a bit overwhelmed by the magnitude of the task ahead. “If the IIA hadn’t come with a family connection I might have had second thoughts,” he recalls. “My other projects on the go were far more straightforward. The vehicle (serial no: 24104059A) was in several pieces, so the first thing we had to do was check to see if all the parts were there. This can be a time-consuming task. Fortunately, I’ve accumulated a stock of spare parts over the years, which certainly came in handy.

“Although we were told the chassis had been restored, the next thing we did was check the unit to make sure the welding had been carried out properly. This was important as any problems could lead to structural failure. It turned out one of the spring hangars needed re-plating, but other than that the work was okay. The previous owner had also replaced the brakes and they appeared to be fine, although I tidied up the pipes and fitted new hoses. I also put new seals in the hubs.”

The Land Rover’s bodywork threw up most of the issues, but David and Brian were up for the challenge. Being in the trade, David also contacted several specialists who agreed to assist with the work. “I need to thank a few people, including my own garage Mackays in Edzell,” said David. “The convenience of having the garage literally across the road, was a big help. Local welder Ewan Mitchell, trading as EJM Fabrications, took care of the rest of the aluminium, as a bit of work was still required on the rear tub.

“For some reason the previous owner had cut the angle along the floor using a 9 inch cutting disc and taken it completely out the tub. This left a quarter inch gap that now had to be repaired using other sections, so that the welds could be hidden behind the panels.”

While the Land Rover was away being repaired, David cracked on with the rest of the work. “Because of my day job, most of the restoration was done in the evenings and weekends,” he said. “I would often find myself sitting at home rubbing down panels in front of the television. At one stage, I even had the engine sitting on a table in the living room! I don’t have a purpose-built shed, so this meant we had to do a lot of the work actually inside the house or rig up tarpaulins in the yard. It doesn’t sound a big deal, but it all took time.”

David’s other suppliers included Engine Resource based a short distance away in Dundee. “The company specialises in supplying and refurbishing old engines,” David explained. “The owner Derick Wilkie was very helpful. I also need to mention Andy Duncan at North Sea Coatings based in Arbroath. The company specialises in electroplating. They re-plated all the Land Rover’s original bolts and brackets.

“I made the B clips. I ordered some purpose-made clips from various suppliers but wasn’t happy with the shapes, so I ended up making them using the original pattern.”

Although David was not looking to take the IIA off-roading, he likes going to local rallies. This meant that the Land Rover’s engine had to be brought up to scratch. “The re-conditioned engine was a genuine Rover diesel that had been bored out to plus 40,” he said. “Although the unit had been taken out of the vehicle, I managed to get it going. It seemed to be running a bit rough, so I decided to investigate.

“When I stripped down the engine I found one of the pistons was damaged. It had been badly burnt and there was a large hole in the liner. The result was that the bore had to be machined out, and new liners fitted. The engine was then re-machined back to the standard size. What with the crank having to be ground and other bits and pieces, the whole job took several weeks and cost around £700.”

While David was busy balancing his budget, Brian was sorting out the paintwork. “We decided to use single-pack paint,” David explained. “We did not choose any specific Land Rover shade, although it is obviously a suitable colour. We ended up using 15 litres of topcoat and painted every panel both inside and out.

“Most paint manufacturers don’t guarantee colour matches. This means that one tin of paint can differ slightly from another with the same colour code. I also changed the goal posts a little because I originally wanted the Land Rover’s wheels to be painted in white, then decided to use green. This meant we had to go out and buy more paint.”

This also meant that the tins of paint were from different consignments, a potential minefield that can easily trap the amateur restorer.

“We were determined to get an even colour, so Brian used a technique that is common among professional painters,” said David. “We poured all the paint into a large bin and mixed it all together. This resulted in the colour being consistent. We then put the paint back in the tins and applied it to the Land Rover. This technique seemed to do the trick, and the colour is the same shade throughout the vehicle.” 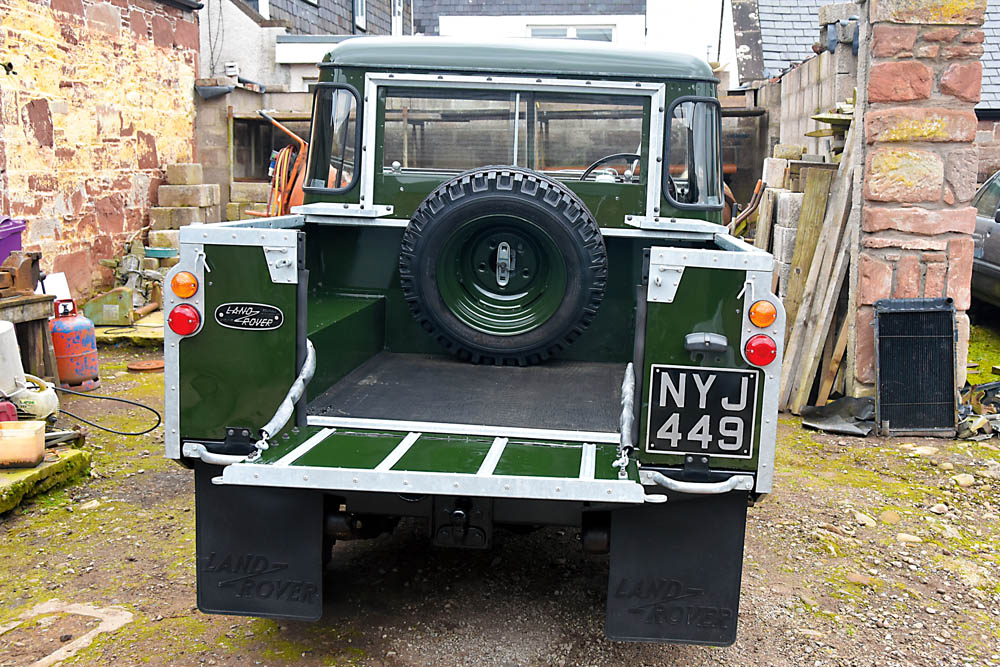 It took David and Brian several weeks to straighten out the Land Rover’s metalwork. Because David was still working full-time, the complete resto took a couple of years

Once the Land Rover was back on the road David and Brian made a point of visiting their suppliers so they could see the IIA in all its glory. “Many specialist workshops carry out precision jobs, but never get to see their handywork in action,” he explained. “They were all pleased to see the finished result, and happy to see the Land Rover up and running.”

Scotland hosts plenty of vintage vehicle shows, and most of them feature Land Rovers. If you are lucky enough to own a vintage Landy it needs to be a cut above the rest if it wants to stand out from the crowd. Yet despite the fierce competition, NYJ 499 has already won several rosettes. These include ‘top of class’ at the popular Scottish Transport Extravaganza held each year at Glamis Castle, and the ‘light commercials’ award at the Farming Yesteryear show at Scone Palace near Perth.

“The irony is we never set out with the intention of restoring the Land Rover to tip-top condition,” David explained. “We just wanted to patch the vehicle up and put it back on the road, so we could sell it on. We weren’t interested in winning prizes, or anything like that.

“Unfortunately, some restorations take on a life of their own, and we ended up doing a far better job than we had planned. The cost was also significantly over-budget. The family connection also muddied the pool, and my mother is encouraging me to keep the Land Rover. Uncle Angus is now 86-years-old and still driving. He was down at the garage recently extolling the virtues of the restoration, so it looks like we’ll be hanging on to the IIA for the foreseeable future.” 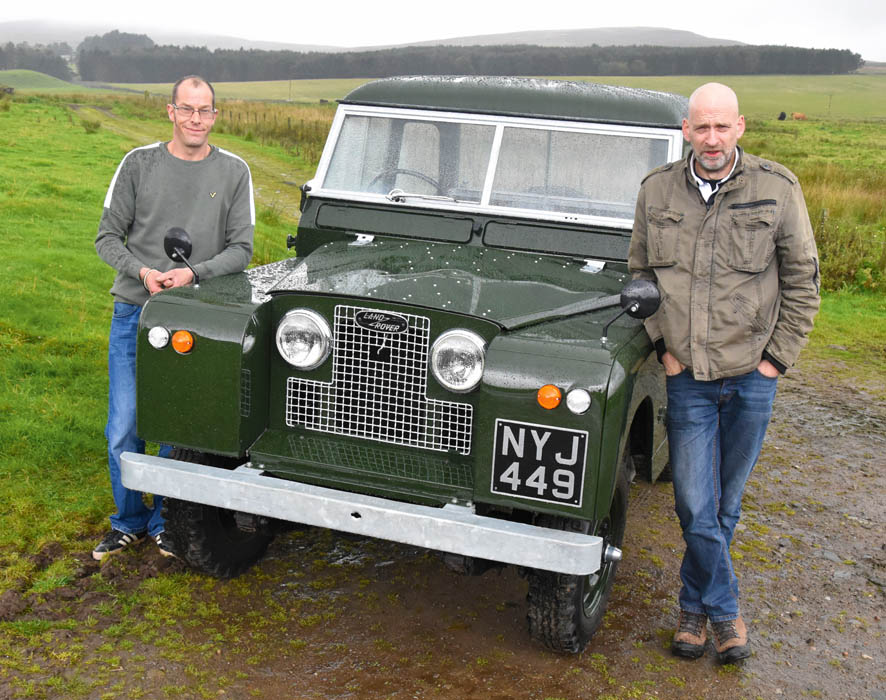 At least David and Brian have the consolation of driving the IIA and say the vehicle is great both on and off the road. “The Land Rover is surprisingly nippy bearing in mind it’s a diesel,” said David. “The area around Edzell is all about country roads, so you’ll struggle to do more than 40mph. NYJ 499 is a bit of living history for these parts, and a lot has certainly changed since 1962. It took a lot of hard work, but the IIA is now restored for future generations to enjoy.