Want to look the part when parking up at the Burleigh Horse Trials but not look like a fool when trying the extreme mud-run at the Billing Off-Road Show? Then we think you might like Terrafirma’s Defender 110: it’s classy yet capable

I don’t like calling them this name or term but ‘old Defenders’ are still just as popular as ever. In fact, when they stopped producing them four years ago their prices just rocketed as they became a must-have accessory amongst the fashion conscious and average LRM reader. One might even argue that they have become more popular, most definitely so amongst the thieving bastards who nick them. Which is why some enthusiasts would rather drive an affordable Freelander, Range Rover or Discovery. I mean when was the last time someone nicked one of those?

The same ‘tired and knackered’ Defender 200Tdi which might have cost £2500 in 2015 is now being sold as a ‘must-have collectable’ for £5500. Just with more rust. People always want what they can’t have though today it’s more a case of what is not produced anymore. The reason I get so excited every time I get into my 110 is because it’s a part of my identity. It’s an extension of who and what I am. So when Eddie Priscott, the Director of Terrafirma, called me to come and look at his recently-finished project Defender 110, I knew that it would be his vision of what a Defender should look like.

Eddie has been involved in the 4x4 accessories market for several decades now and the man knows a thing or two about what works and what does not. Did you watch Ewan McGregor and Charlie Boormans’ ‘The Long Way Down?’ They drove two BMW motorbikes from John O’Groats to Cape Aghulhas. Well not really,  they had a pair of Nissan Patrols with a crew who pampered and looked after them along the way, and it was Eddie who worked long into the night preparing those expedition support vehicles. It’s what he knows and what he is good at.

Now the eagle-eyed amongst you will recognise this Defender as the 110 that stole most of the attention at the Great British Land Rover Show held at Stoneleigh near Coventry. It’s a recently created mobile advert for Terrafirma and the perfect platform on which to test its new products and latest creations. Proof of this is some of the new bits that have been added since the show,  while some products such as the brackets for the bulkhead lights are still in development. Incredibly these lights were probably the single most photographed accessory at the show due to their unique location. I bet you the latest copy of LRM that by the time we get to the 2020 Billing Off-Road Show, several Defenders in attendance will also have bulkhead-mounted lights! If you create an accessory that the masses like they will follow, buy it or else make it themselves. Production brackets are available now.

As we make our way around the extreme off-road course at Tixover, I ask Eddie what motivated him to turn a 2010 former military police Defender 110 into this? “We need to give customers a reason to pick our products over the other options out there. This Defender shows them exactly what can be done with our products. We want to be trendsetters with our offerings, we certainly have the experience.”

Before you start emailing me or Terrafirma to ask for the paint code for their 110, think again. The 110 was previously white until the talented crew at Vinyl Revolution got hold of it and gave it an urban grunge pattern – so it was wrapped and not painted. We at LRM just love the faded Union Jack on both sides. I once looked at getting my Defender wrapped but then realised that a decent wrap costs the same as a paint job. Eventually my bank manager, who also occasionally doubles up as my wife, convinced me that it looked just fine with its faded original paint. I must say I do agree with her.

Eddie pops his 110 into low range as we start to climb up some rocky boulders. I ask him about the decision to go with the Italian-made Terrafirma Dakar 7x16 wheels (which are load rated to 1500kg) paired with BF Goodrich KM3 Mud Terrain tyres. “We have used 30mm wheel spacers and the tyres fill the wheelarches rather nicely. I think the 285/75/16 tyres work brilliantly on a Defender. Definitely the best all round size available and they don’t affect the steering lock, braking or engine performance in a negative fashion.”

On the subject of brakes he has fitted the Wavy cross-drilled and grooved brake discs which definitely look good. These coupled with Terrafirma performance brake pads ensure that we are able to comfortably stop when we find ourselves precariously balanced on top of one of the biggest boulders. “Does one really need this set-up on a Defender?” I ask. “Performance pads give a higher coefficient of friction when cold. Most brake pads are great when hot but when driving a TDCi Defender with its high torque motor and low gearing you need something with bite,” argues Eddie. 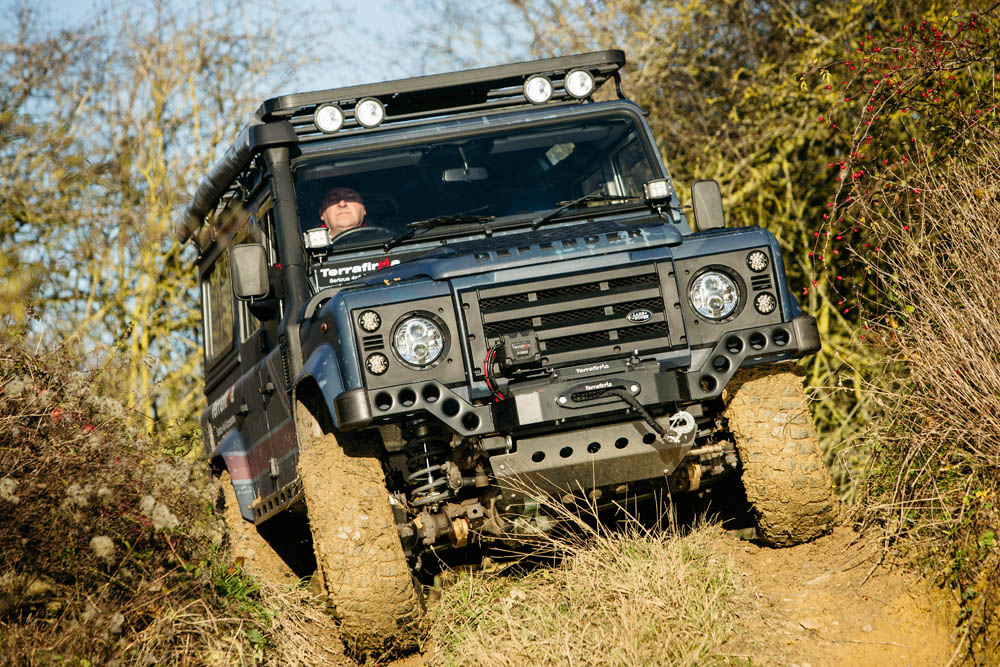 The BFG KM3 tyres are made playing in the mud. Photos: Alisdair Cusick

So while there is no doubting its stopping ability what about its off-road improvements? “The heavy-duty shafts and CV joints are made from aerospace material. Then we have also fitted a fuel tank guard, rock sliders, rear bumper corners, diff guards front and rear, a steering guard and castor-corrected radius arms with polyurethane bushes. While the bushes make for a firm ride the car still flexes the way it should,” he reveals. Eddie proves this in a cross-axle pose on some rocks and photographer Alisdair cannot open the back door. I am more than impressed – this is more than a show queen, Eddie has built something that will outperform a standard Defender on a rough expedition. He has added parts that will enhance, perform and protect. If you were to do rough trails on the weekend in this and hit a rock or slide into a tree, the chances are it won’t damage the bodywork.

Furthermore, if a mate needs a hand or a recovery there is an A12000 Terrafirma winch housed in its new Skeleton AC winch bumper. Compared to my ARB monster bumper it’s more minimalist but still more than up to the task with its 6mm thick winch tray and lightweight bumper ends which are great for keeping the weight down and improving fuel consumption. Plus it gives a better approach angle, can house a winch and will protect it! I ask Eddie about the £450 12,000lb of pulling power winch. “We have sold over 2000 of these winches in two years with hardly any warranty issues. We know they work and we support people who own them with spares if needed. This 6hp 12-volt motor winch comes standard with radio remote wireless control, cable remote control and synthetic rope. The whole steel bumper and winch combination only weighs 45kg which is less than your ARB bumper.” Luckily for Eddie  there are no kangaroos or wildebeest roaming the highways of the UK. 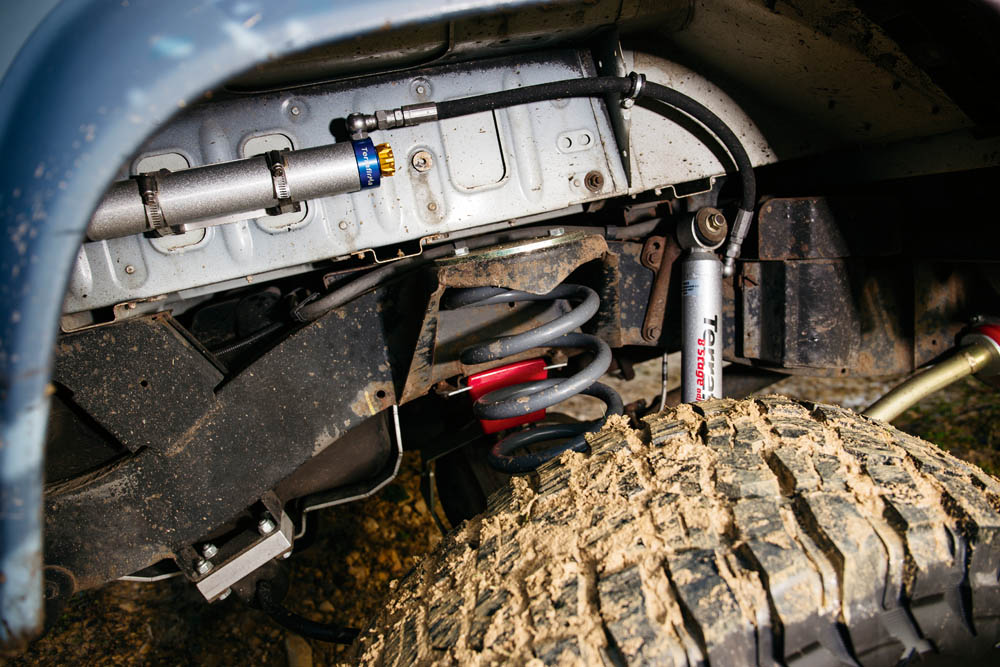 Pick a setting on the eight-stage remote reservoir shocks

My 110 with its standard Land Rover suspension would struggle over some of the rocks we now find ourselves climbing over. The Terrafirma Defender has medium load 2-inch lift front and rear coil springs which are combined with eight-stage remote reservoir shock absorbers. I ask Eddie why the change from Nitrogen adjustable shocks? “We used to sell a lot of those but never sold the gassing kits. This made us worried that people were buying them but not adjusting them. So we have replaced the Schrader valve and just have the adjustable knob so that people can’t mess about with them and put air instead of nitrogen in. I run between setting 2 and 3 at the moment as the Defender has no load. The more weight or load the higher the damping ratio setting. You can adjust them to get the ride quality or characteristics you want. This Defender still has anti-rolls bars and corners comfortably. Remove them and you would have to crank up the damping ratio setting.”

From what I have observed thus far, Eddie has tried to create something that offers the best of both worlds, steady while swift along on the tar but still capable on the challenging off-road stuff. As the back wheel falls into a hole I notice there are dislocation and relocation cones which allow the springs to drop right out. This allows the tyre to kiss the ground, grip and help us move forward. Pretty impressive stuff really.

Eddie stops on the rocks and we take a look under the front of the Defender. I notice the heavy-duty steering rods and adjustable Panhard rods. I enquire why. “They might only be a small thing but it makes a massive difference especially with bump-steer. When you have lifted suspension and the Panhard rod goes out of parallel with the ground, having adjustable rods just helps bring them parallel again.”

Time to hop back into the warm Defender. As for the interior not much has changed except for the retrim kit for the seats. The fabric was originally destined for Red Bull Racing  applications but they decided it was too heavy. The outside edge is the same hardy material one finds on motocross bike seats, while the bit you sit on is traditional in feel but stunning in colour and look. “We wanted a modern expedition yet sporty fabric that breathes well and is wipeable. We don’t do quilted leather. That is not what we are about,” states Eddie firmly. The only other non-standard bits in the interior are the parcel shelf and roof console. This was done to address the alarming lack of packing space in a standard Defender.

There are a lot of middle-aged Defender fans who want to drive a really well-sorted vehicle but at the same time they don’t want to upset the neighbours by having some banging eyesore off-roader on the driveway. This is that Defender. It’s for going to work in on the Monday after spending a weekend shooting, with the family or off-roading. Terrafirma’s products are designed to protect the vehicle and also increase its capability.

As for under the bonnet, this 2010 Defender 110 has the standard 2.4-litre engine. Thus far it remains untouched and Eddie feels that it’s more than enough for what it needs to do. If anything he is a little cynical about tuning it. “In the future we might consider something to improve fuel consumption. I don’t want flashing lights on the dashboard as I have seen that happen to tuned TDCi Defenders. Once you start to put a rack and a snorkel on your fuel consumption goes down to 18 anyway, so why tune it?” The man definitely has a point.

Despite the end of Defender production, Terrafirma has invested heavily in expanding its Defender range of products. It obviously want to turn the place into a one stop-shop for Defender owners, where they can get it all. Everything you see on this Defender can be picked out of the Terrafirma catalogue and comes in a cardboard box, and  you could fit this at home, in your garage or on your driveway. Is this what a modern day Camel Trophy vehicle would look like? Eddie thinks so and we might just agree with him.

If you like what you have seen in the article and want to buy some of the featured gear for your dream Defender, then look no further than terrafirma4x4store.com