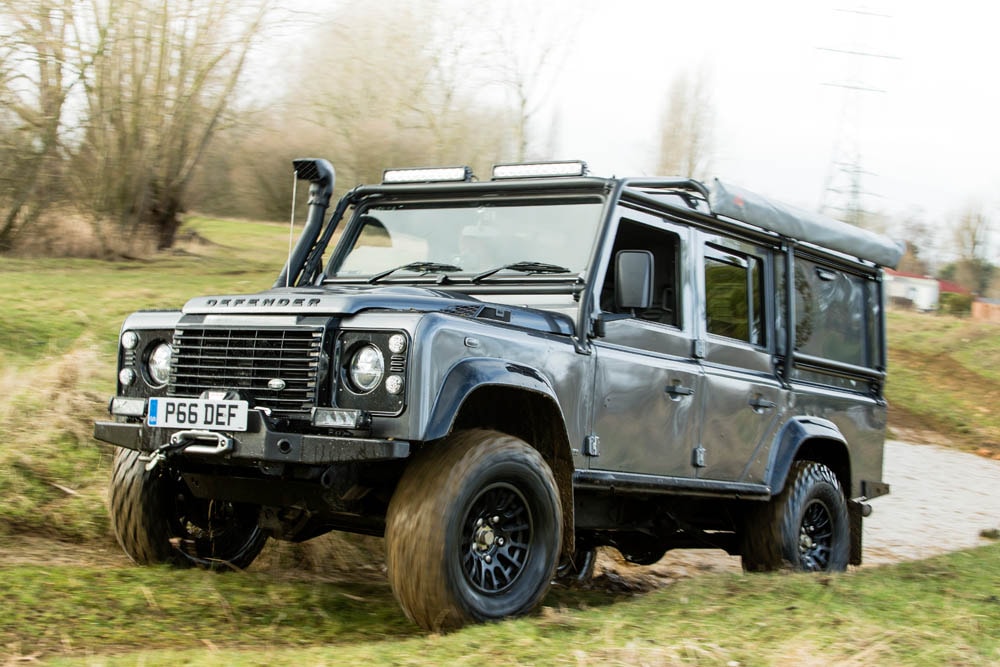 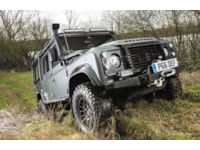 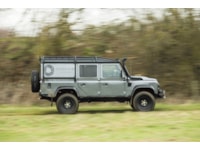 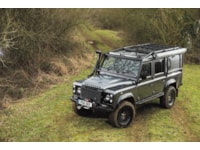 Simon White has farmed all over the world. Today he and wife Bridget, together with their four working cocker spaniels,  seem happily settled in South Lincolnshire, where they produce award-winning wines and manage a successful vineyard. While Simon’s passions include farming, animals and wine making, it is Bridget and Land Rovers that are really the true loves of his life. He is quick to reminisce on how as a young boy he would drive his dad’s Series Land Rovers. The first Land Rover that he owned was a straight-six 109, soon followed by a Series IIA.

But merely owning a Land Rover was not enough. Like most young men, Simon wanted more: “I put a 3.0-litre Capri engine into it with a Steve Parker conversion but it kept on popping half shafts. In went a 3.6-litre V8 but it did not stop or go around corners, which was never going to end well.”

This buying and modifying behaviour of Simon continued until he took up a farming job in Zambia’s Copper Belt. He did not go alone and took along a Defender 90 Tdi.

Simon explains what happened next: “They gave me an Isuzu pick-up as my daily driver but it was so unreliable that the Defender took over. Sadly it stayed behind when I came back to the UK, due to African red tape.” So he purchased another 90 Tdi that racer Ben Duckworth tricked up. Later, when working in the Ukraine, he drove a Discovery 3 and did about 60,000 miles per year in it – all without any dramas and on really rough roads.

However, he has only one favourite and that is his 2014 Black Pack Defender 110. This limited-edition Defender features several Santorini black finishes, including the interior facia, Defender wording on bonnet, roof, headlamp and grille surrounds and wheel arches, which combine well with the privacy glass and ebony Alston headliner inside. 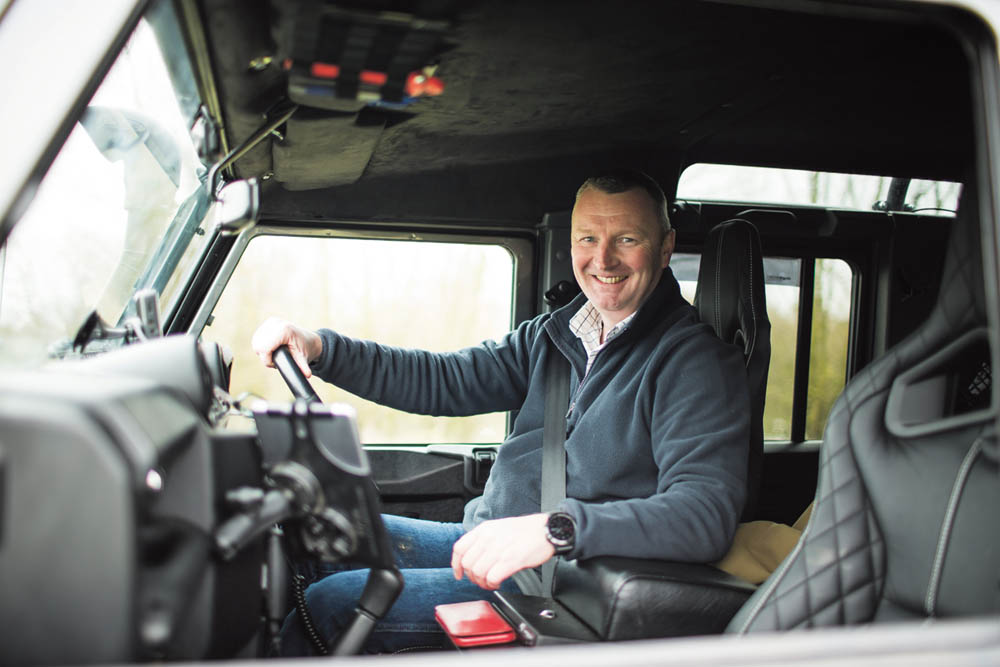 Simon is not about show and shine though and he has quietly gone about turning his Defender into something with more grunt, capability and comfort. This is his Defender for life and one that he will never sell, he says. His other Land Rovers will come and go.

Simon explains: “My wife jokes and says that one day they will bury me in this Defender. She wouldn’t forgive me if I ever sold it. I bought it to own, enjoy, modify and play with, just as I have done with all my other Land Rovers.”

So far, Simon has only done 25,000 miles in it, which includes overland trips to the Pyrenees and Morocco. On the farm it is occasionally used for wine deliveries and towing duties. 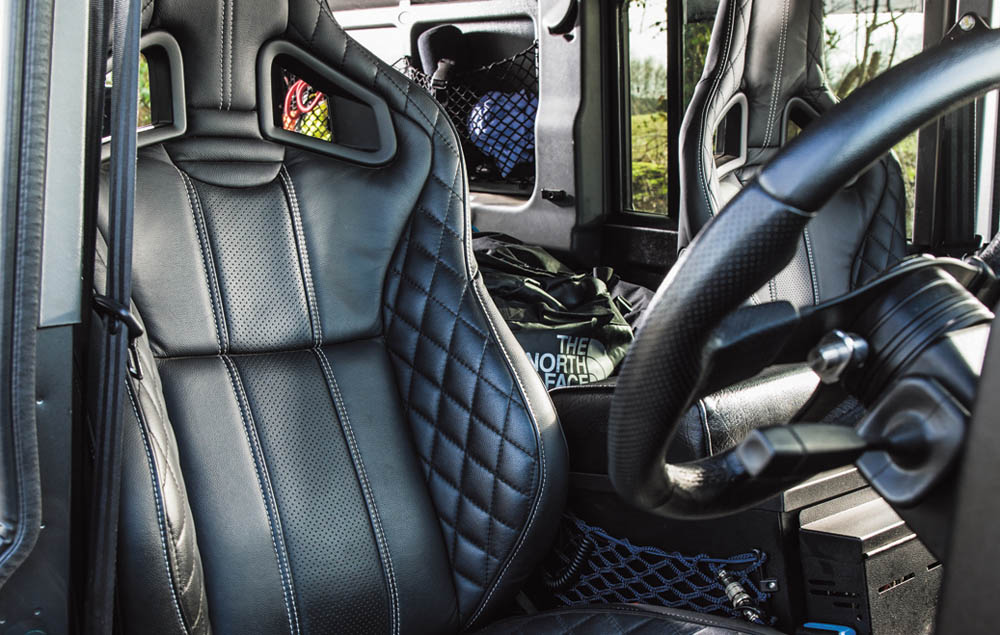 Black's the theme inside

So how has Simon transformed his dream Defender? Let’s start with the interior. Out went the standard half-leather seats which were replaced with black Recaro leather buckets. “They are so much more comfortable. When you spend a whole day driving a Defender on off-road tracks or on the motorway, then you need to look after yourself.”

The back has been stripped out and replaced with a MMS drawer system and additional storage chests for the safe storage of kit. The 40-litre National Luna fridge can still run without any problems when parked up thanks to the auxiliary battery and National Luna Battery monitoring system. I like the bombproof look of the steel MSS cubby box and it should keep valuables safe.

Externally it has a Safety Devices roll cage, which was expertly fitted by Foleys SV. All of the other work was done by Simon himself. Why fit a roll cage? “I’ve seen many of these things roll in Africa and they just crumple up like a packet of cigarettes. It ain’t pretty. People normally lose it when trying to recover from a slide. My wife is also a lot happier with it fitted.” 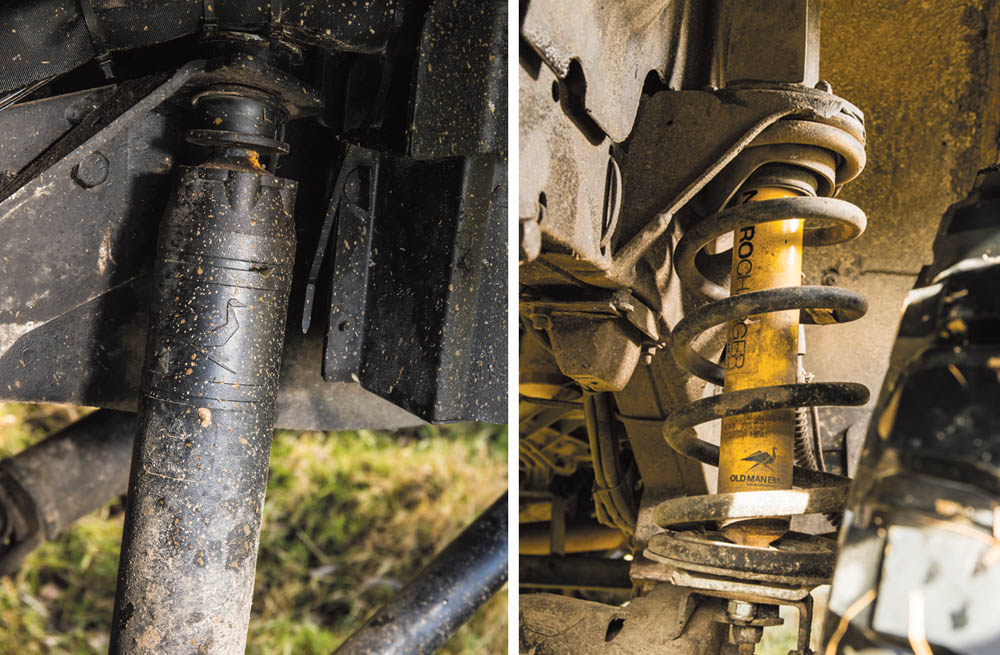 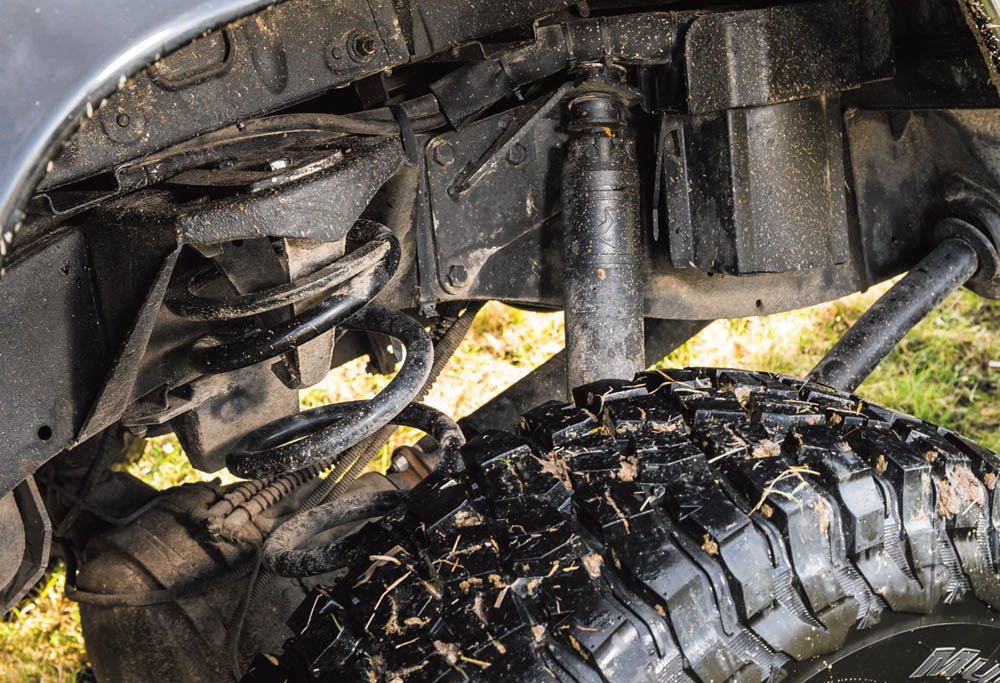 When it comes to suspension set-up Simon is a serious Old Man Emu fan and he has used their shocks and springs on his past three Defenders. For shocks he has opted for +5.5 oversized NitroChargers housed in Gwyn Lewis dislocation cones in the back  and Gwyn Lewis turrets in the front. Best of all, the four shocks are exactly the same so you really only need to carry one spare as they are interchangeable.

Old Man Emu heavy-duty springs fitted in the rear (with about 55 mm of lift) handle the extra weight. When you stand side-on to his truck it does look as if the back stands a wee bit higher, despite the 45 mm of lift from the front springs.

This set-up is useful when Simon is towing the heavy digger on the farm or else his tyres would end up high in the arches. 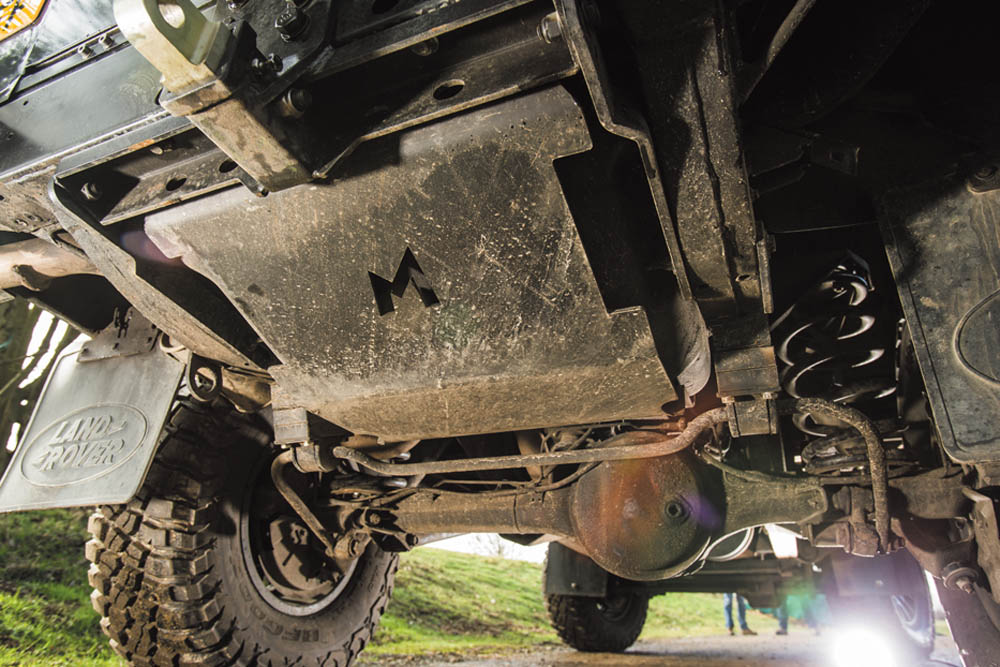 As for running gear it has Ashcroft heavy-duty hubs in the front as well as the same company’s drive shafts in the rear. There is a set of heavy-duty prop shafts in his workshop that still need fitting, but maybe that will happen before his summer trip to Morocco?

After breaking a diff on a sand-driving trip to France last year, he opted for Ashcroft ATB LSD differentials for both the front and rear (rear pegged). Simon says there are several reasons for this move: “It certainly improves the on- and off-road manners of my Defender. It just feels more planted and predictable on gravel and ice. You have to drive it to believe the transformation. It’s certainly better than an open diff when off-road and almost as good as a full locker as long as you keep all four wheels on the ground. My current set-up is without a doubt more capable than a standard Defender thanks to the suspension travel, which means your wheels do stay on the ground and Traction Control takes care of the rest.”

As Simon heads off to faraway off-road destinations he has given himself some extra underbody protection such as a steering guard, diff-guard and rear fuel tank guard. The two-inch receiver hitch on the back can house a tow bar or useful recovery pin. The latter is a safe rear recovery option. 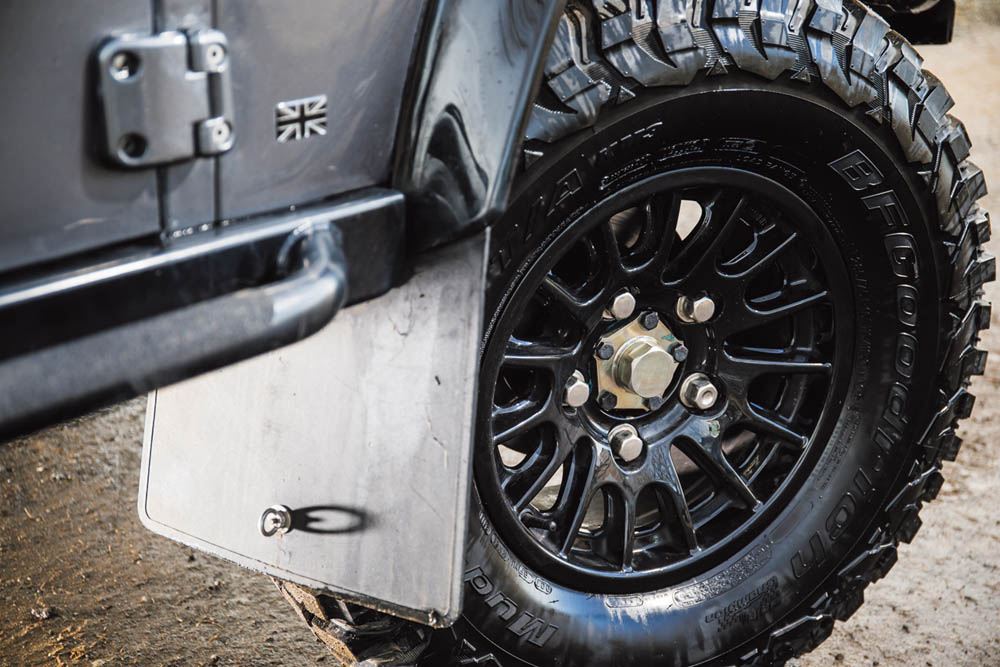 Then when the going gets really tough the FF rock/tree sliders will step up the plate and take the brunt of the blows. If he (or someone else in the convoy) does grind to an unceremonious halt then there is always the option of the Warn Zeon 10 winch spooled with plasma rope.

Simon got rid of the fancy standard gloss black Sawtooth alloy wheels and replaced them with 16-inch Bowler wheels, as they have a slightly higher weight capacity than standard Defender rims. Thanks to their handy offset there are no wheel spacers needed.

While he has has always run 255/85/R16 tyres since working abroad for the extra inch of clearance under the diffs, he was not able to find a set of BFGoodrich KM3 tyres in this size and so he went for LT285/75/R16 instead.

I ask Simon about his choice in rubber. “I’m very impressed with the KM3s so far. They might be a little too wide for the vehicle but perform well on- and off-road which is all that matters really.”

Unlike many others out there, Simon hasn’t opted for any old snorkel. He has fitted the Nakatanenga RAI snorkel which has been mated to an Aussie Nugget Stuff airbox via a three-inch pipe. This is to ensure a smooth and consistent airflow and eliminate the air leaks of a standard system. Simon swears that this makes a massive difference to power delivery. 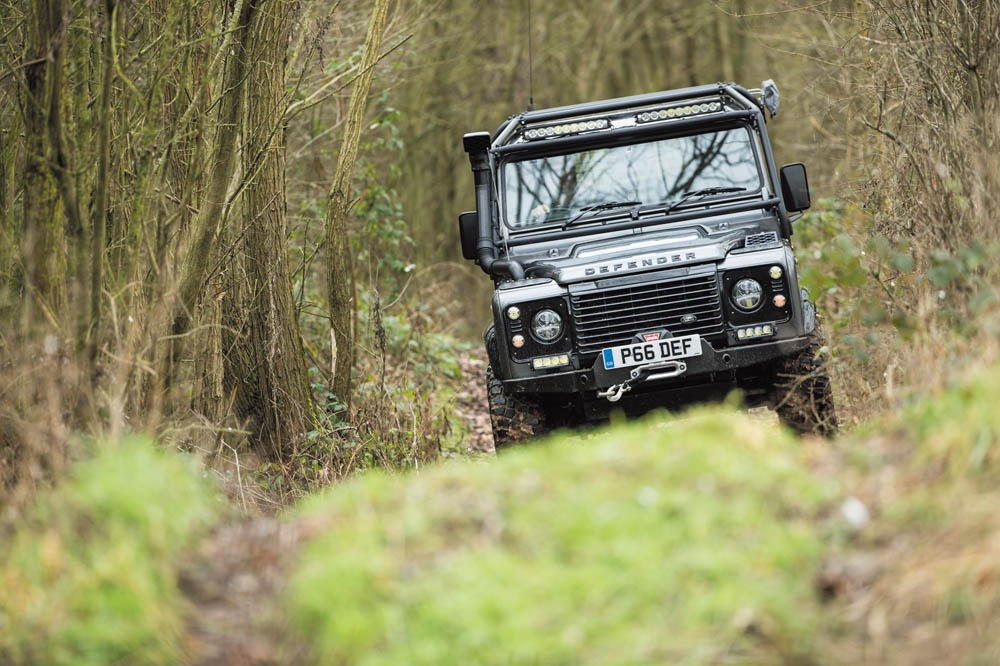 As we make our way over some of the more challenging bits of the Billing off-road course I can see that Simon knows what he is doing. “I’ve driven tractors all my life so I’m used to driving in a bit of dirt. You have to have a feel for it, I guess. I would never say that I am a good off-road driver but what I would say is that I don’t often get myself in a mess. Driving off-road is something that comes naturally to me.” 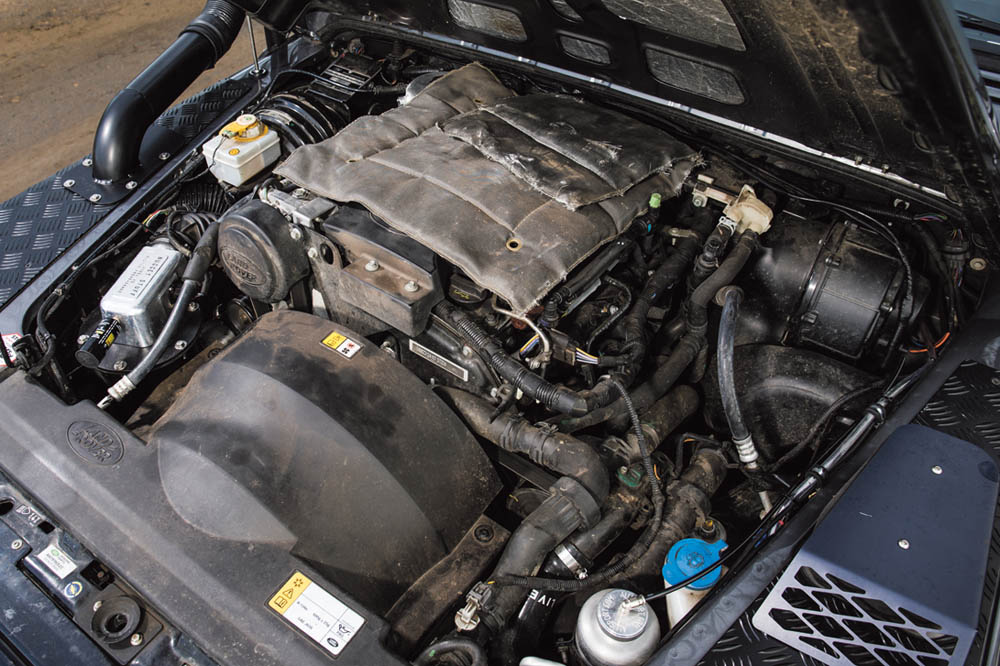 Thanks to the oversize intercooler, hybrid turbo and electronic tuning by Alive Tuning, Simon has a little more power to play with. The reason for this route is that after trying to tow a heavy digger uphill, Simon soon realised just how little torque the standard Transit unit had. Now the vineyards are alive to the sound of a tuned TDCi.

The more I prod and poke around Simon’s Defender the more I like it. He has not tried to build something pretty, it’s all about improving performance, reliability, capability and comfort.

The final word goes to Simon and I’m sure most LRM readers will agree with him. “Everything I have put on or done is for a very specific purpose, and not for looks. I have tried to ensure that it still has a look of relative respectability without seeming over the top. I know I have created something that will comfortably do a 5000 mile trip to Morocco before returning to its role on the farm.” 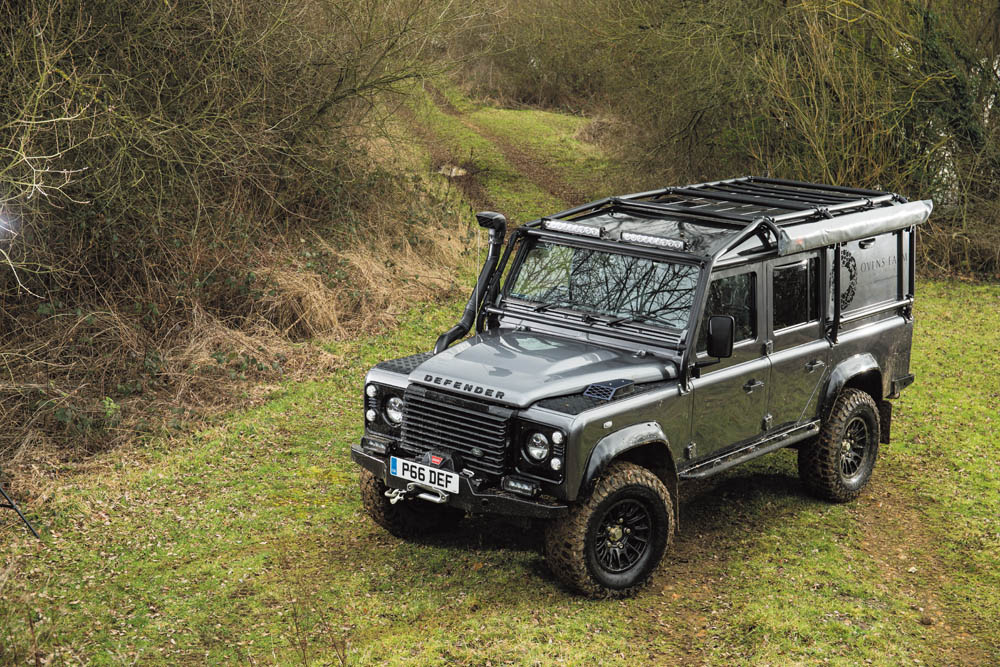